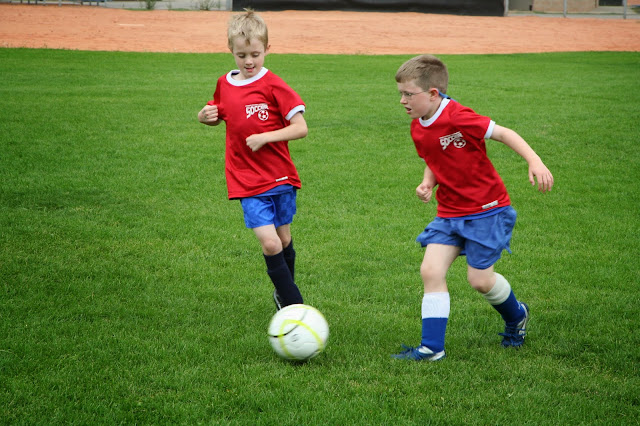 
I grew up in a soccerless America. Logan city sponsored little league baseball (I played, but not very well) and basketball (I didn’t play because it was on winter Saturdays when I would rather be skiing). Soccer was never an option. I knew that soccer existed, but only in foreign lands. My first real exposure to the sport was during our June 1974 Logan High Orchestra trip to Europe. In Amsterdam we played a concert in a park and no one came. Come to find out everyone in the country was glued to their TV watching the World Cup. My next soccer memory was in 1984 when a group of us in DC went to one of the pre-Olympic elimination round games which sent winners on to compete in Los Angeles.

Marie’s exposure came earlier. She remembers the soccer stadium near their home in Tangier and then watching 1970 world cup games on the television while living in Venezuela.
Our exposure to soccer increased dramatically with the introduction of AYSO to the USA in the 1980s and through which many of our nieces and nephews were introduced to the game. Two of those nephews grew up to play soccer at the college level.

When Sarah was born, I wanted to make sure that she was introduced to all types of games and toys and that they not be gender specific. One of her first toys was a small, soft, fuzzy, stuffed soccer ball with a bell inside that jingled as it rolled. Like so many other young kids her age, we enrolled her in city league cub soccer. That lasted for a few fun years, but then like her dad, she realized that competitive sports involving balls were not her thing. The boys however, took to soccer from the start. They played on city league teams beginning at age five and then moved on to the Utah Storm soccer club where they both have excelled. One of the hardest things about going on Semester at Sea was having to miss their spring season. We return in time for May tryouts for next season. Will is worried that he is out of shape, but he should do just fine. Through the years Marie has proven herself to be the consummate soccer mom--learning the rules of the game, bringing treats and cheering loudly. She also enjoys watching soccer matches on TV with the boys.

Last fall when we started to discuss our semester abroad, we considered several post voyage travel options. Travel somewhere in Europe was the most likely option. At one point we decided to see if a professional football match would be an option so I checked schedules on line and discovered that Manchester United (the boy’s favorite team) had a home game three days after our arrival in Southampton. We all thought it would be a fun thing to do (especially for Joel and Will), but weren’t sure about the cost. Come to find out to order tickets we had to first pay to join the team’s fan club which then gave us the opportunity to buy tickets. It would be an expensive event. Added to the mix was the fact that there were very few tickets still available for the May 16th game. Not certain that it would happen, Joel posted post-it notes all over my bed stand before going to bed that evening begging for me to buy the tickets. How could I not? For some reason ordering on-line was too complicated and so late that night I called Manchester and enrolled us all in the fan club (which included a welcome package that included our membership cards--which doubled as game tickets, souvenir pens and key chains as well as a 10% discount on team paraphernalia) and then bought the tickets. From there our two week road trip through Britain and Ireland emerged. 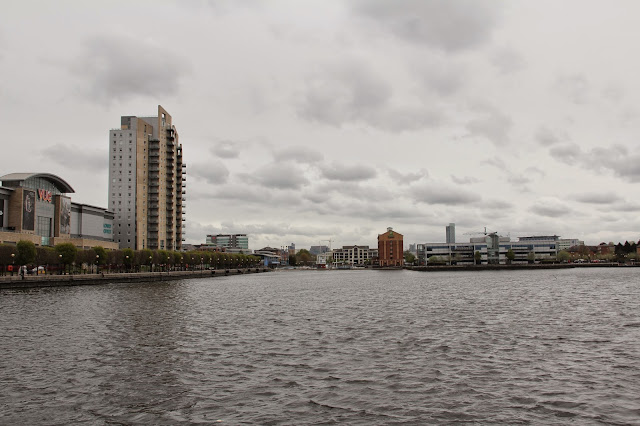 We stayed at the Holiday Inn Express (center) on the Salford Quay. It was a great location, just a 15 minute walk around the Quay to Old Trafford--the home pitch of Manchester United. 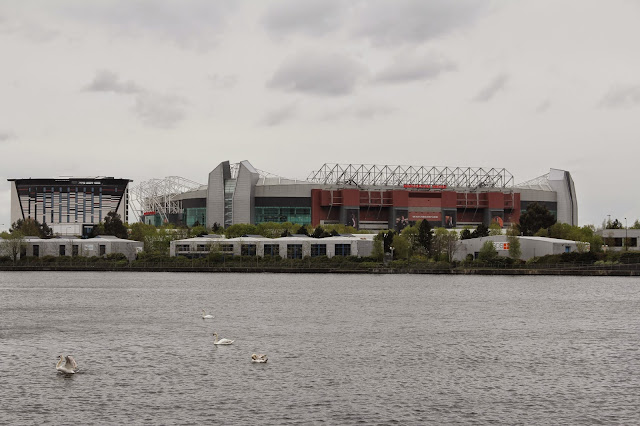 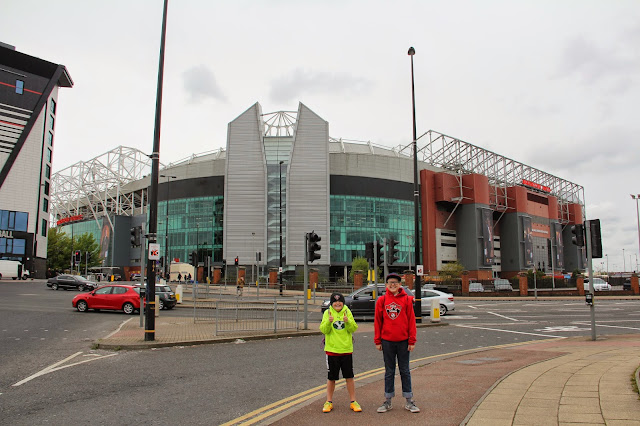 Our first item of business on Saturday morning was to walk over to the stadium to the Super Store.  Both boys found a Man U jacket, hat and scarf. 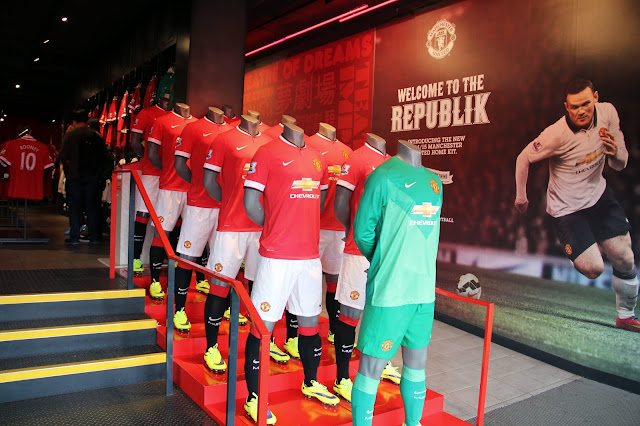 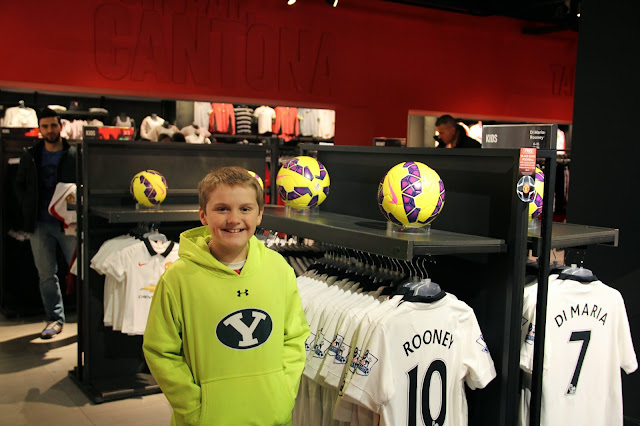 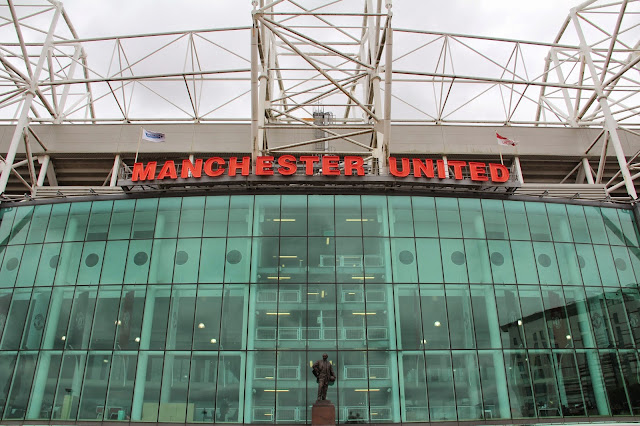 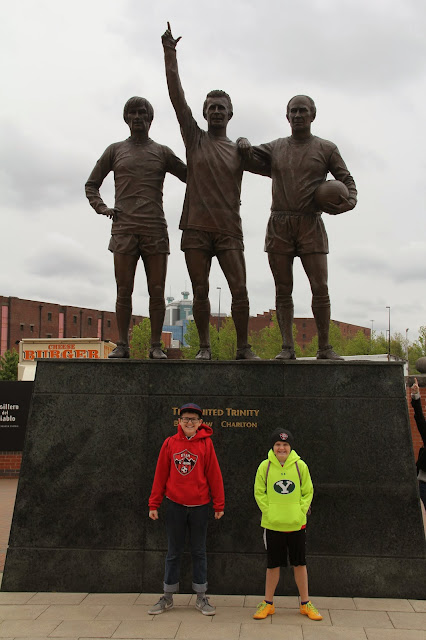 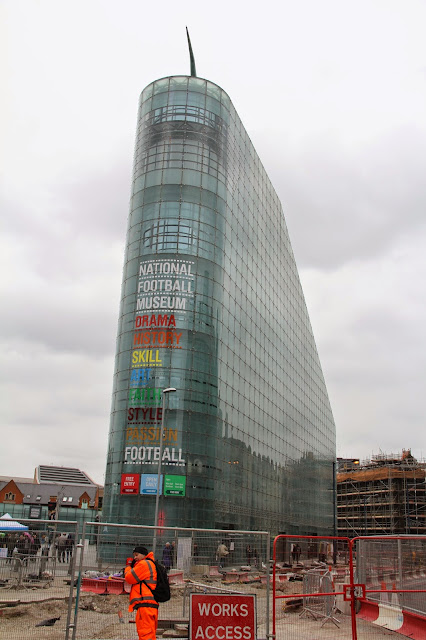 Next stop was the National Football Museum in the center of the city. 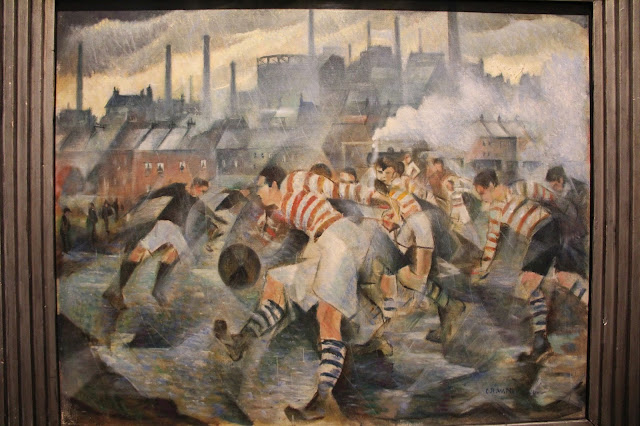 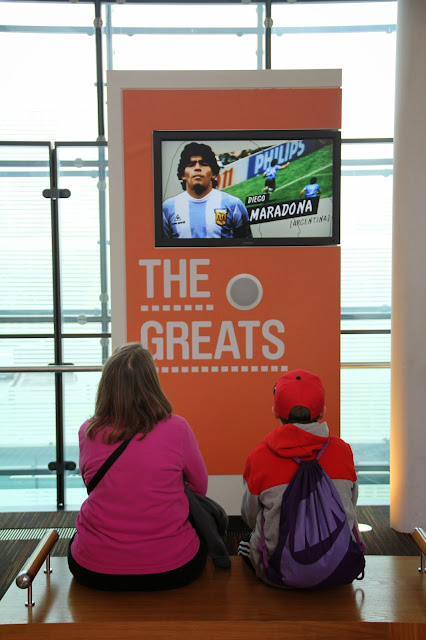 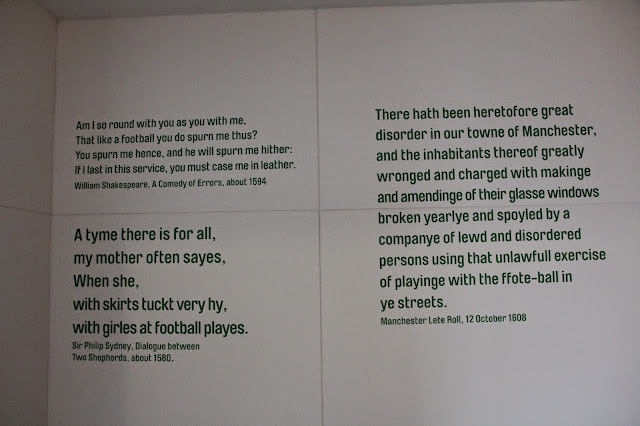 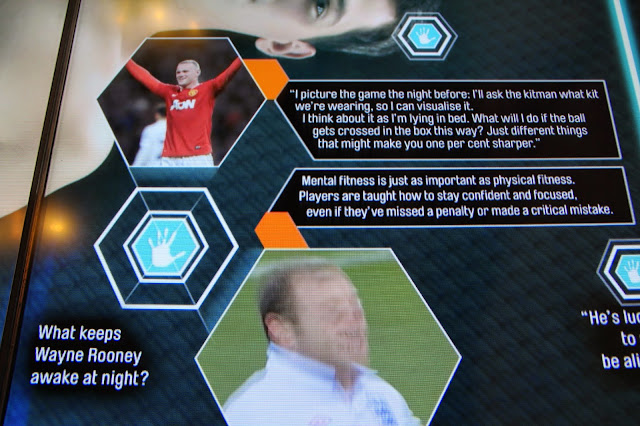 Some say Will looks like MU star Wayne Rooney. 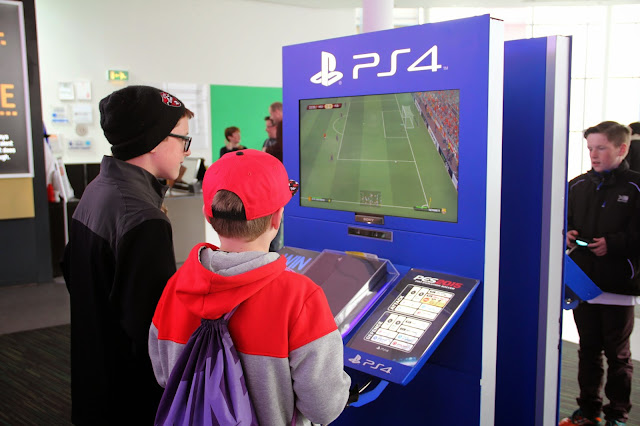 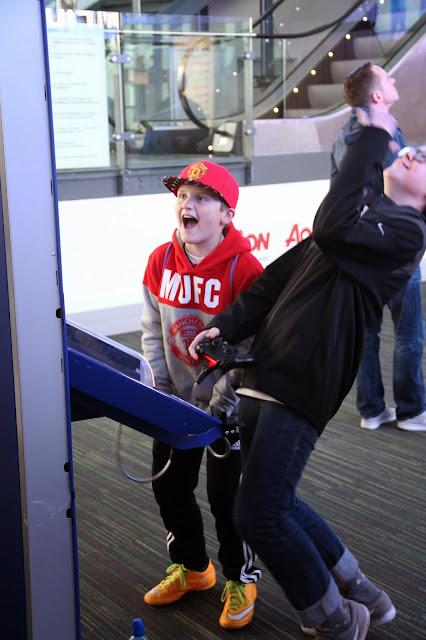 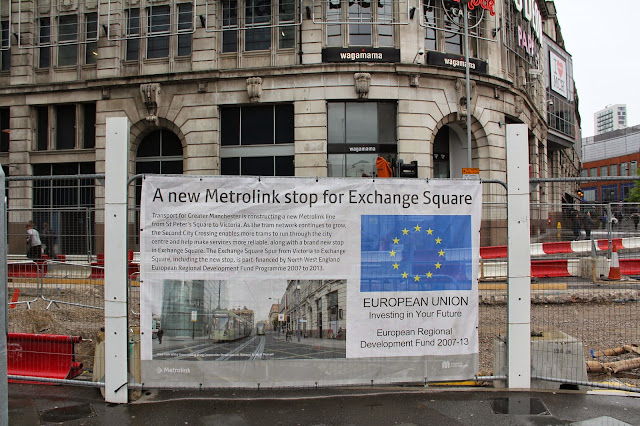 Nice to see the UK getting some benefit out of it membership in the EU. I imagine a good share of its dues go to helping new members from Eastern Europe. All we got out of it were closed roads and a confused drive to the museum. 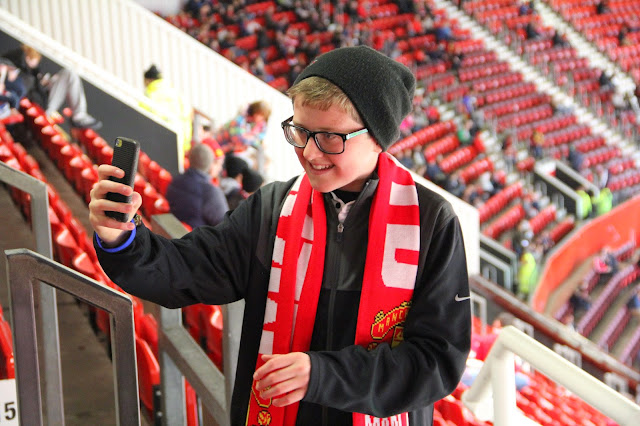 We got to Old Trafford an hour early so we could enjoy all of the pre-game activities--including a selfie. 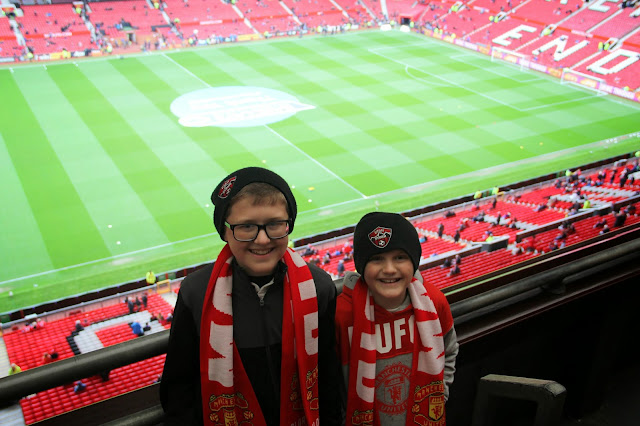 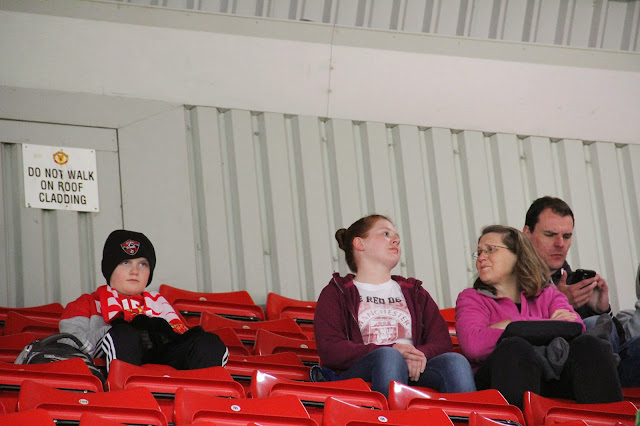 Four rows from the top of the third (highest) level. When I bought the tickets these were the best they had. I figured we would be high enough to avoid any hooliganism or the constant standing and singing. I was right. There were other families with kids in our area. One lone man kept singing Man U fight songs, but other than that it felt much like a BYU football game. Beer could only be consumed on the food concession concourses and there were announcements that drunkenness would result in expulsion. 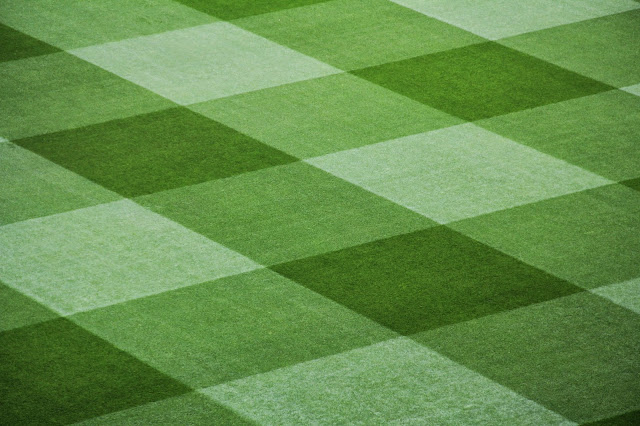 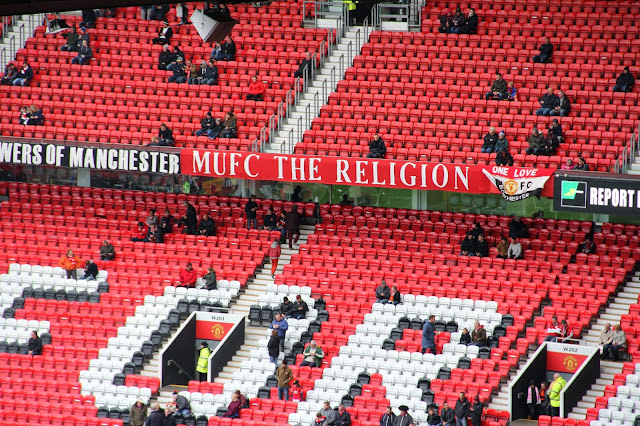 Seems the Emmett boys are not the only ones who considered attending a game at Old Trattford as a religious experience. MUFC=Manchester United Football Club 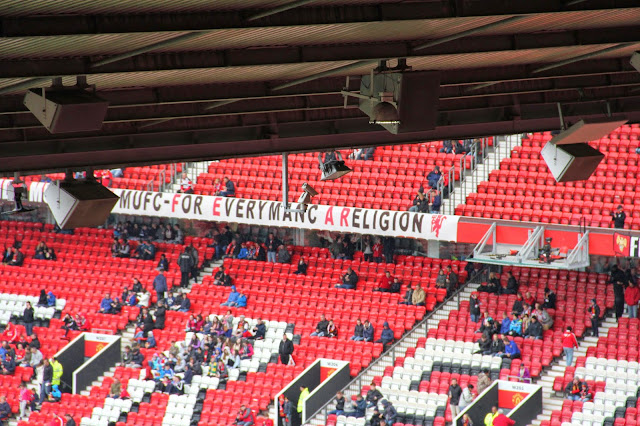 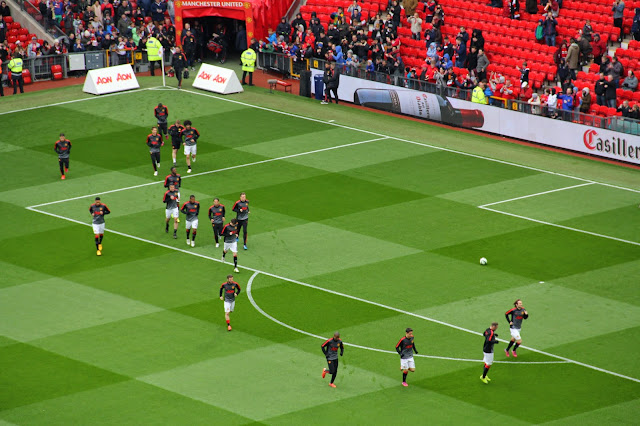 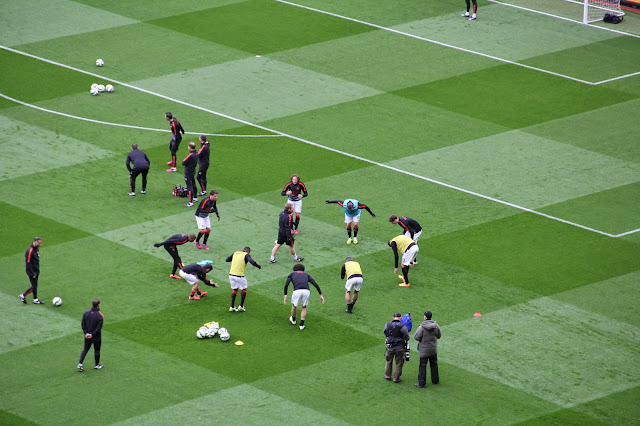 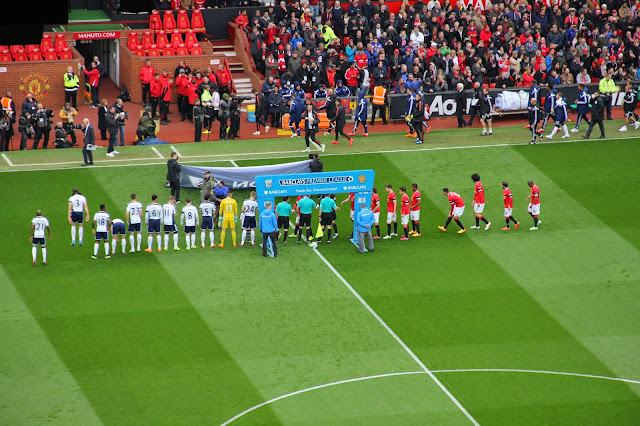 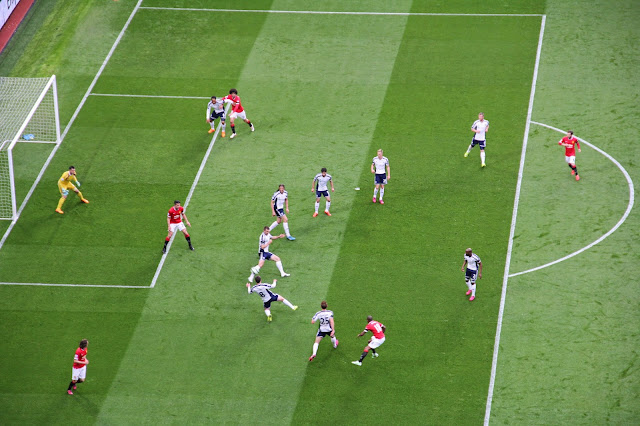 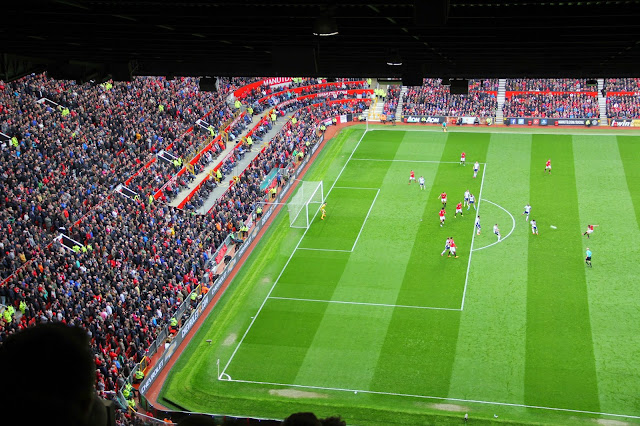 Man U (4th in the rankings) lost 0-1 to West Bromwich (13th in the rankings). It was a frustrating final few minutes when Man  U missed many shots on goal. Nonetheless we all left happy and fulfilled. The only glitch to the evening was when built up rain on the roof poured down on my legs and feet and when I tripped carrying two hot chocolates, two cheese and onion pasties and two twix bars back up to our seats. I juggled and caught the hot chocolates, but not without some spilling on me.

Observant Joel noticed in the program that Man U will be playing FC Barcelona (another favorite team) in California this summer. A soccer revival may be in order.
Posted by chad at 7:22 PM