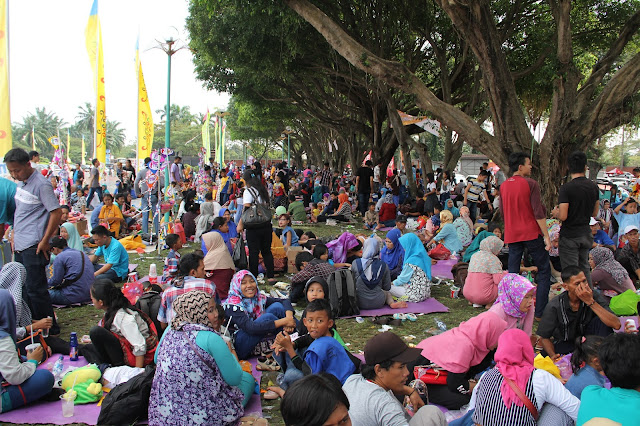 We arrived in Jakarta at 1:00 am Friday morning—late one hour due to a departure delay while sitting on the tarmac in Tokyo caused by a typhoon near Taiwan. We didn’t get to our hotel until after 3:00. To battle jet lag head-on we got up at 9:00 am with a plan to spend the day walking in the sun so we wouldn’t be tempted to take a nap. Since this was the first time in Indonesia for many in the group we figured a great introduction to the country would be to visit Taman (Park) Mini Indonesia Indah (beautiful). In concept it is like the Mormon owned Polynesian Culture Center in Laie Hawaii. It was the dream-child of Ibu Tien Suharto—wife of President Suharto and opened in the mid 1970s. My first and only visit to the park was in January 1977 soon after it opened on a p-day while a missionary. Back then the park was more open and park-like. Now it is overcrowded with extra warungs for food and souvenir selling, plus car and motor bike filled roads circling through the whole place.

TMII was packed with families enjoying one of the final days of the week long end of Ramadan celebration known as Idul Fitri. Many Jakartans have left the city (saving us from its notorious traffic jams) to celebrate the holiday in their home town or village. It seemed like everyone left in the city went to TMII to hang out. And for many of those people, one of their favorite activities was asking to take photos with anyone—including this old white guy with a red face—from our joint BYU/UVU research team. The park circles a large lagoon with small islands shaped like the islands of the archipelago.

Surrounding this land and water are enclosures for each of Indonesia’s twenty plus provinces. Each compound—which seemed to be planned and taken care of by the provincial governments and thus having various levels of quality—included traditional homes and buildings—some filled with museums and displays of tradition handicrafts, clothing, instruments etc--, a stage for cultural performances, and sometimes a place to eat local foods. For lunch some of us enjoyed delicious Padang food of the Minangkabau (Winning Buffalo) people from West Sumatra—curried beef rendang and curried green jackfruit were two of my favorites. 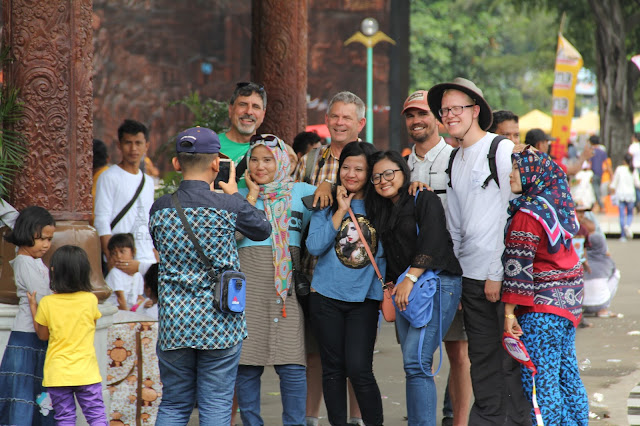 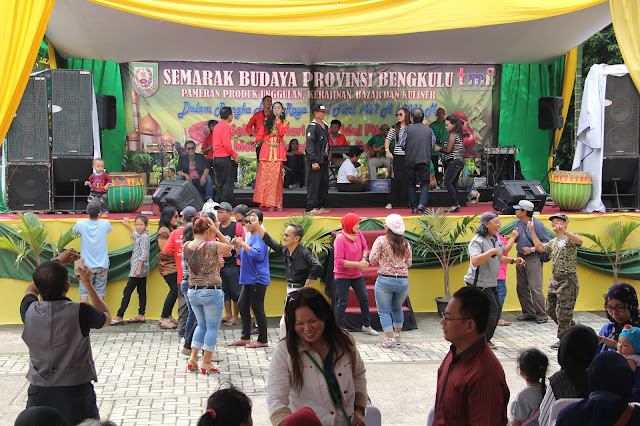 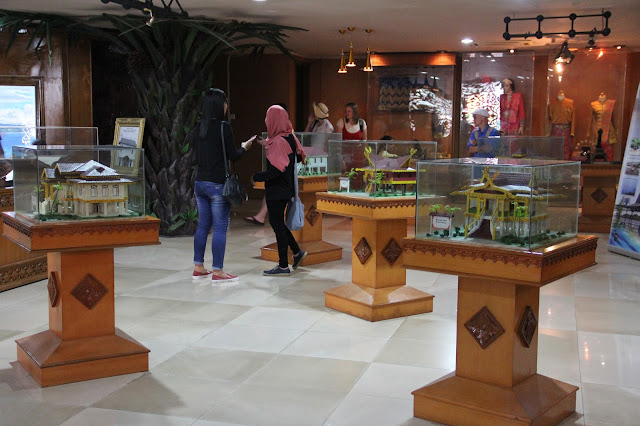 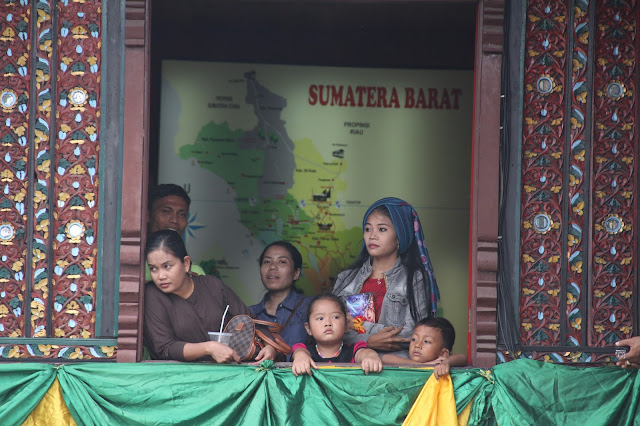 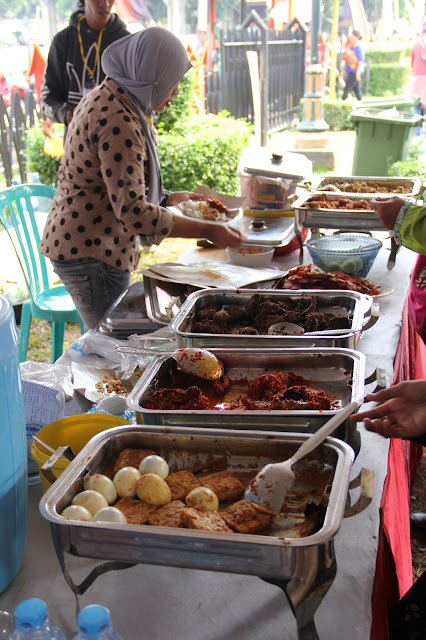 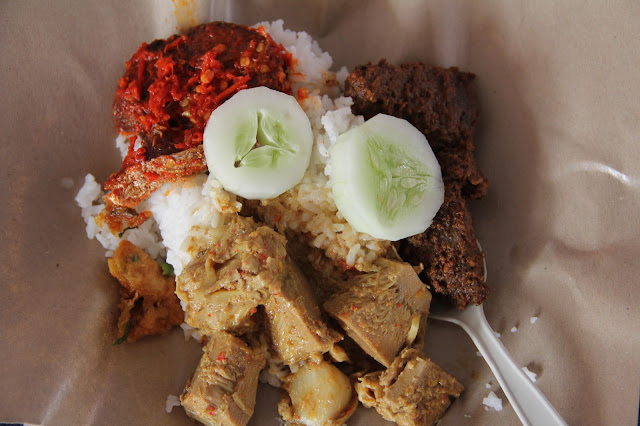 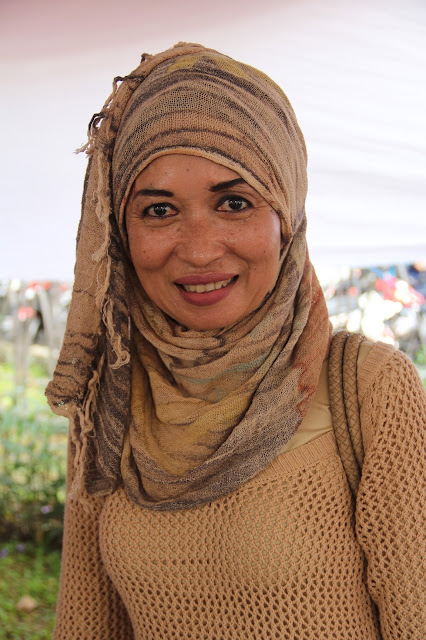 Minangkabau woman. The Minangkabau are Muslims who live in a matriarchal society--inheritance goes from mother to daughter. 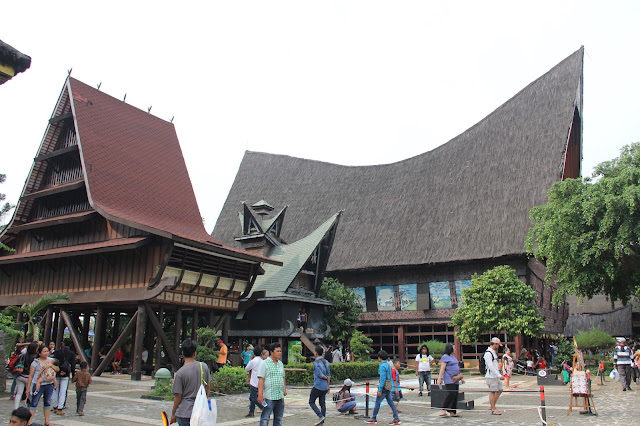 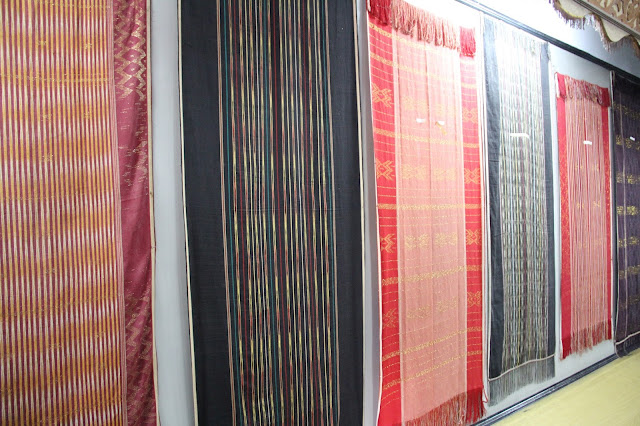 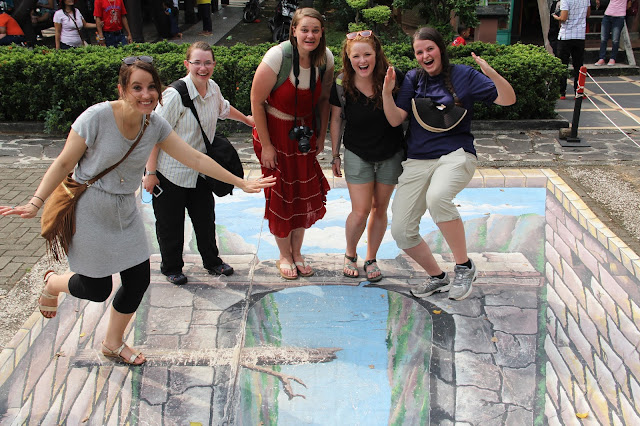 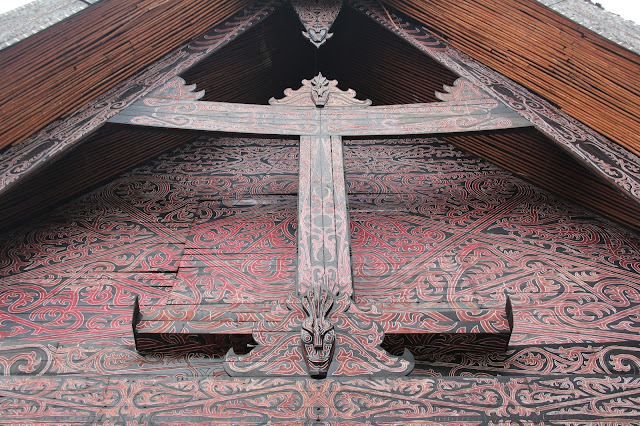 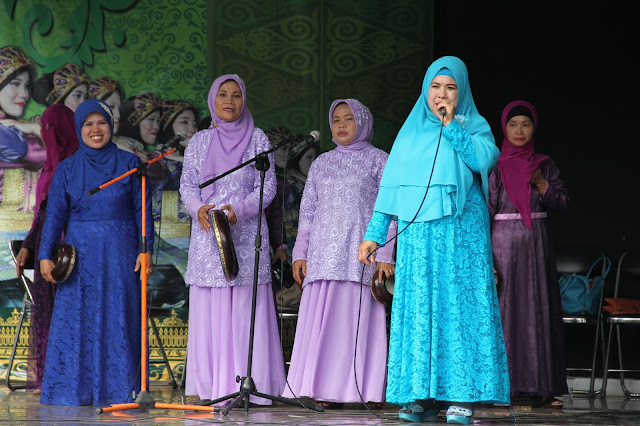 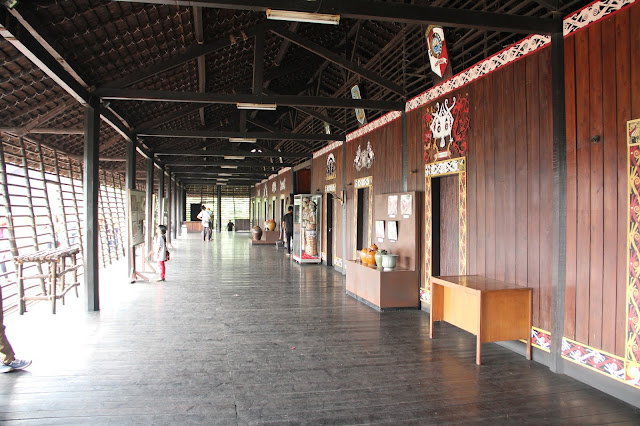 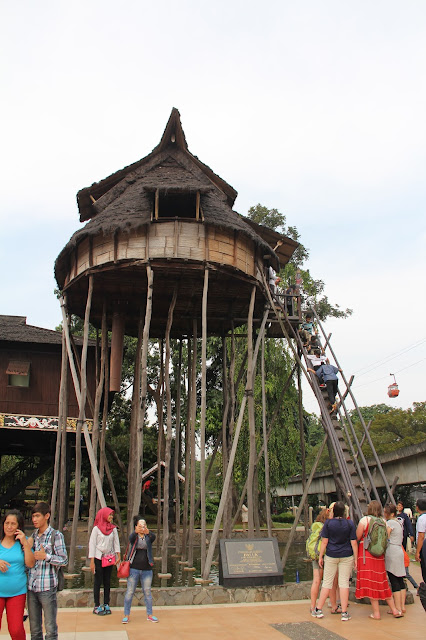 Rumah Adat from West Kalimantan. Where ancestors and animists figures are wroshipped. 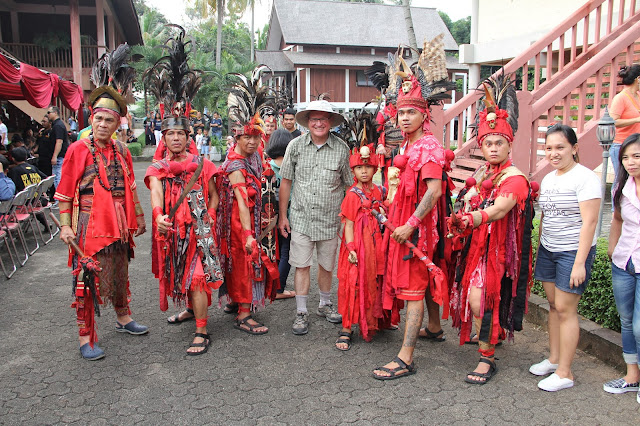 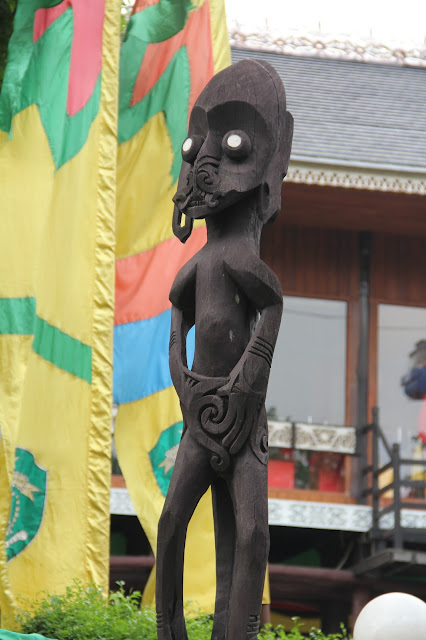 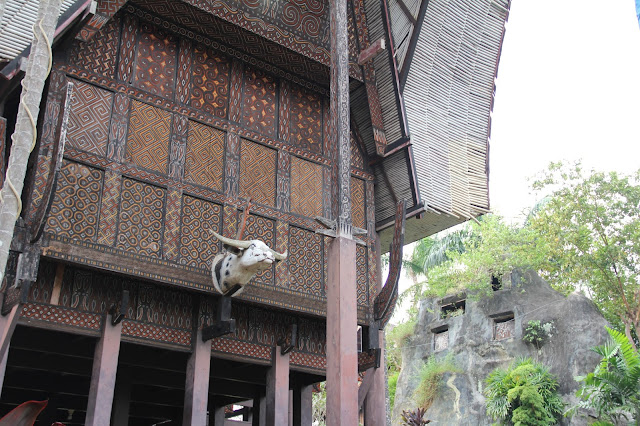 Home and cliff caves for burial of South Sulawesi. 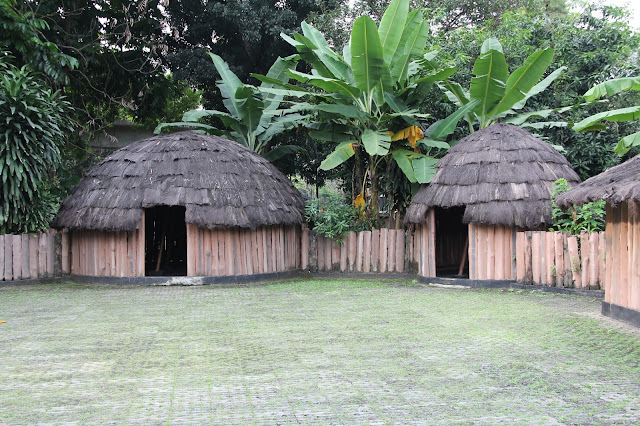 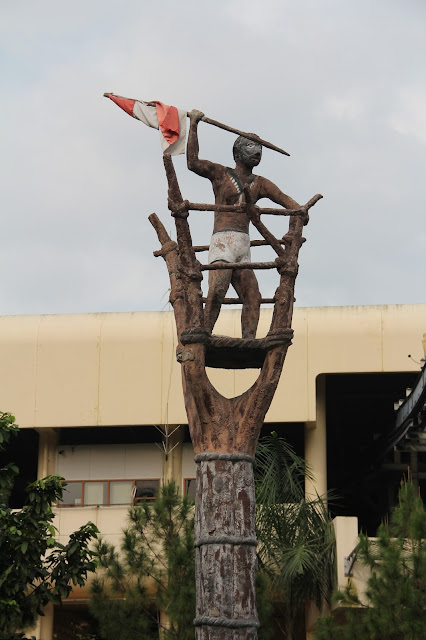 Not sure how many West Papuan warriors would choose to fly the Indonesian flag. Most would probably prefer the Morning Star. 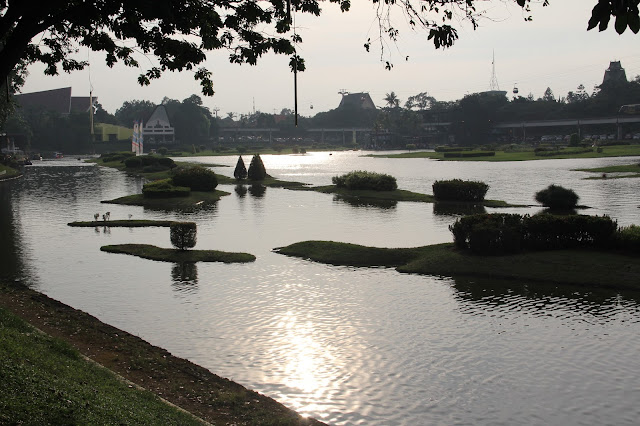 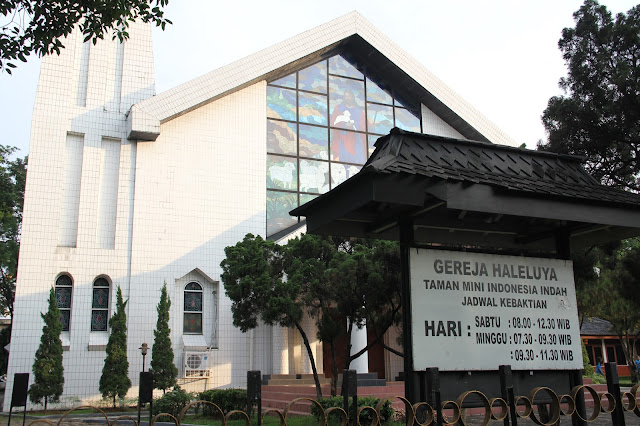 To highlight Inodnesia's relgious diversity and tolerance the exhibits also include functioning places of worship including a Protestant church (above) and a side-be-side Catholic Church and Muslim Mosque (below). 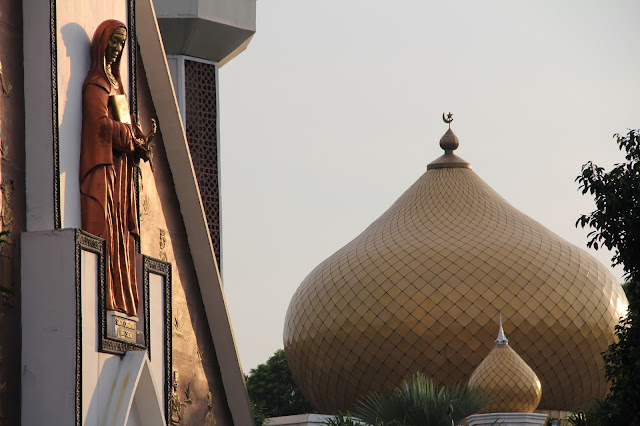 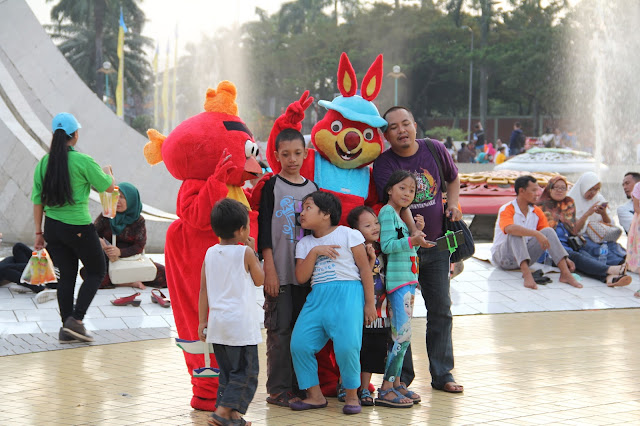 I could always retire from BYU and work as a stuffed animal character at Taman Mini. What a hot and sweaty job.
Posted by chad at 9:50 AM