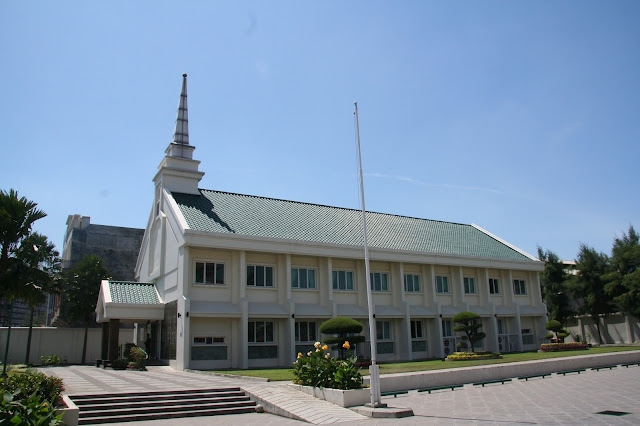 The Surabaya 2nd Branch of The Church of Jesus Christ of Latter-day Saints meets in a chapel in central Surabaya. 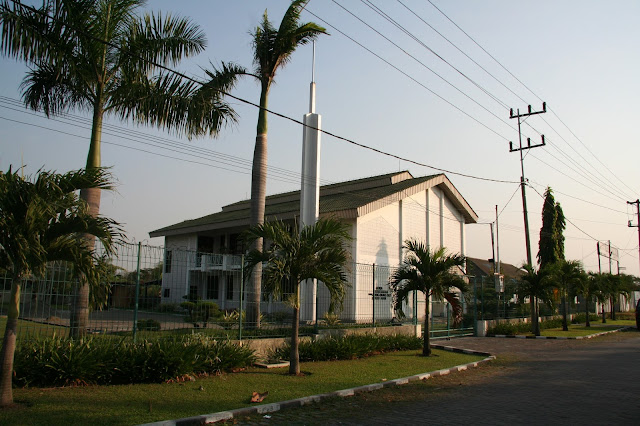 The Surabaya 1st Branch of The Church of Jesus Christ of Latter-day Saints meets in a chapel in western Surabaya. 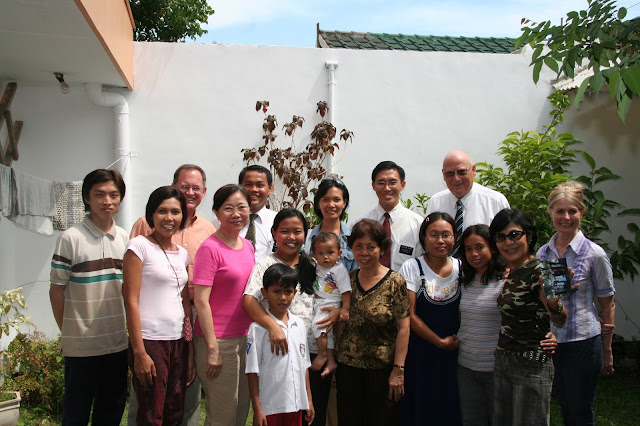 In 2007 I was able to meet and interview members from both branches. Here are a few members and missionaries from the 1st branch at the home of Sister Sandra (in pink). I first met Sister Sandra in 1975 where she was a relatively new member of the church in Semarang and I was a brand new missionary. 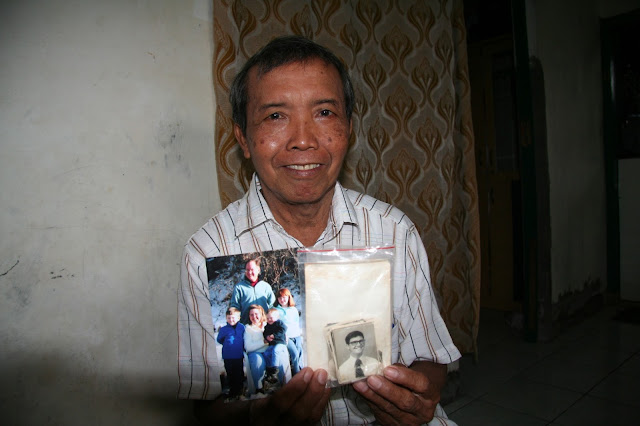 Also attending that branch was Brother Boenari who was my home teaching companion back in 1977. He still had a photo I gave him back then, plus a new updated photo of my family that I gave to him on that visit to his home. 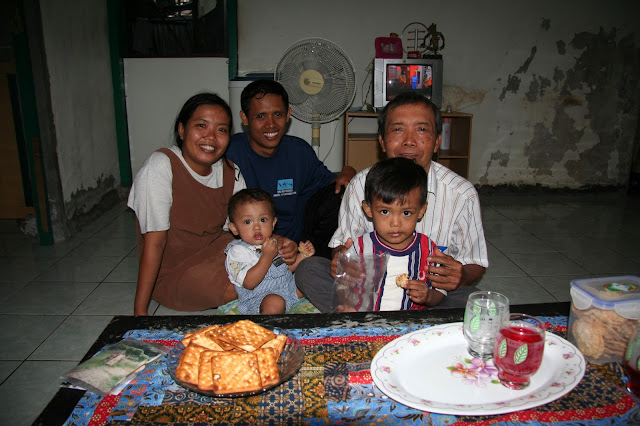 Brother Boenari's daughter and her family. 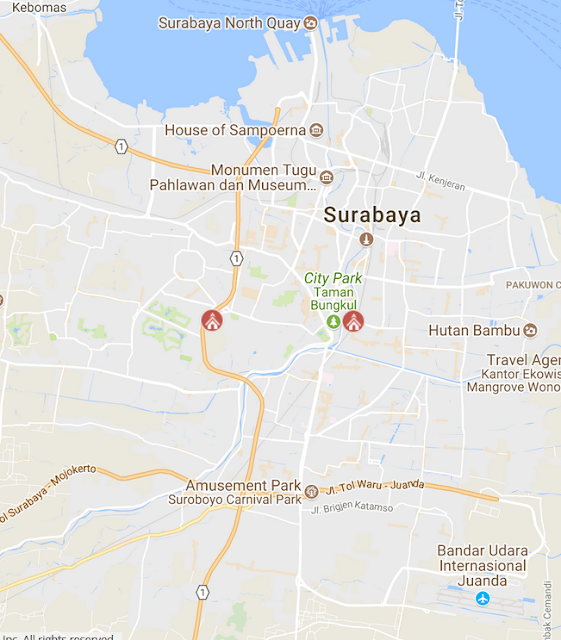 This map from Find a Meetinghouse on LDS.org shows the location of the two LDS Chapels.  The First Branch to the west (left) and the Second Branch to the east (right).

On Sunday Morning May 13th, three churches in Surabaya were bombed in a terrorist act. The suicide bombers, with ties to ISIS, all came from one family. The Second Branch house is located between The Santa Maria Catholic Church (#1 on map below) and the Gereja Kristen Indonesia (Indonesian Christian Church) on Jalan Diponogoro (#3 on map below). The bombings took place around 7:30. Both LDS branches begin services at 9:00 am.  Under police direction, both LDS services were cancelled that morning. Two other families were involved in later bombings. 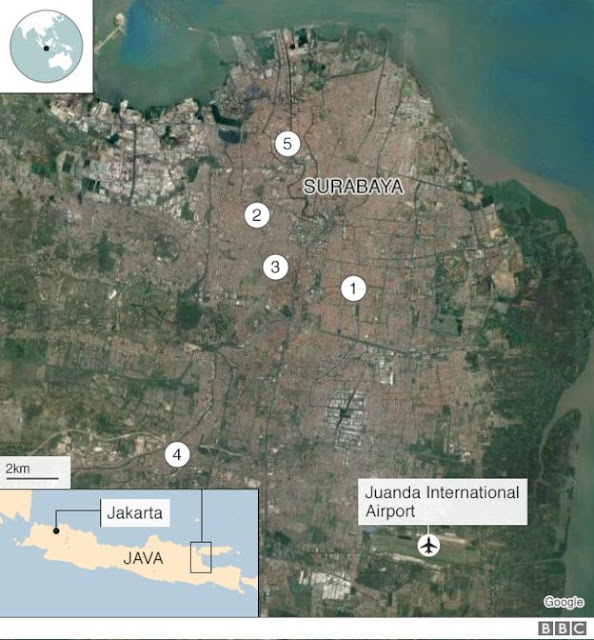 Six members of the same family carried out a series of attacks on Sunday:
1. Two teenaged sons rode motorcycles into Santa Maria Catholic Church and detonated explosives at 07:30 local time (00:30 GMT)
2. The father drove a bomb-laden car at Surabaya Centre Pentecostal Church at 07:35 local time
3. A mother, with her two daughters, carried out a bomb attack on Diponegoro Indonesian Christian Church a few minutes later
There was another suspected terror-linked incident on Sunday night:
4. A bomb exploded at Rusunawa Wonocolo flats, Sidoarjo regency at around 21:00 local time
A second family carried out an attack on Monday:
5. The family of five rode motorbikes to a checkpoint at Surabaya police headquarters and detonated bombs at 08:50 local time.
Source: http://www.bbc.com/news/world-asia-44105279 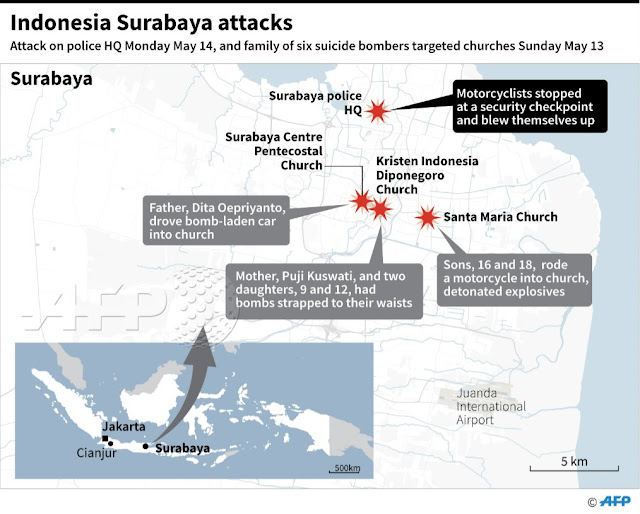 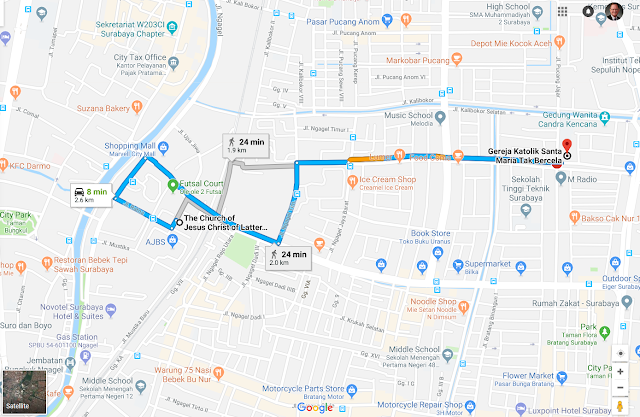 It is an 8 minute drive from the LDS Second Branch Church to the Catholic Church and a 9 minute drive in the opposite direction to the Indonesian Christian Church. 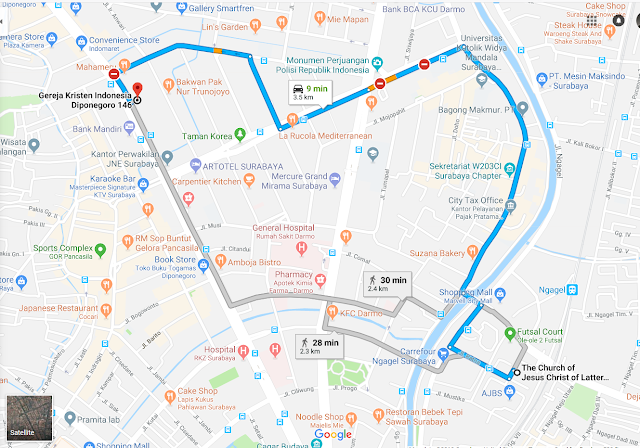 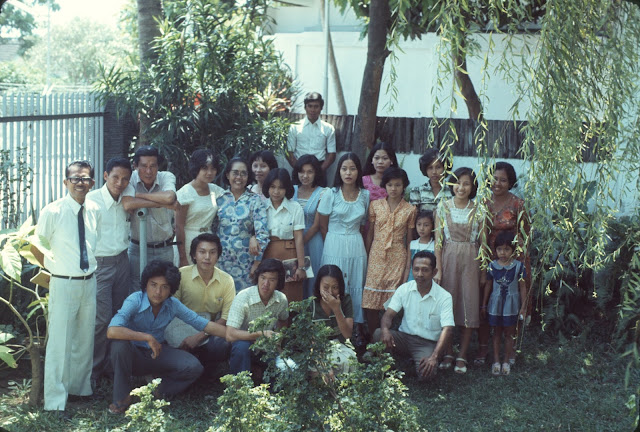 Some members of the Surabaya LDS Branch in 1977 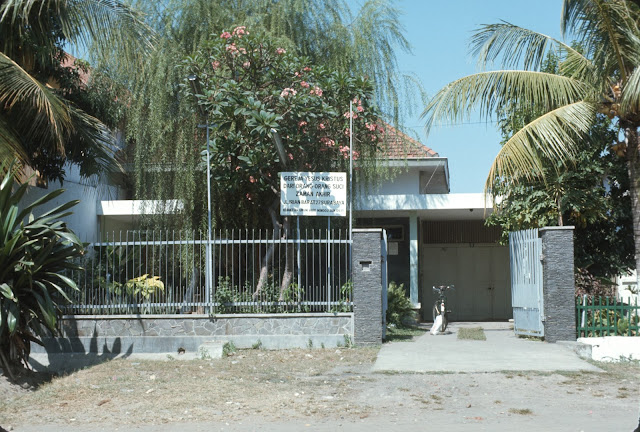 There are many Christians and Christian churches in Surabaya. It is sad to see Indonesian Christians being targeted in a country that has long prided itself as a model of religious tolerance. I highly recommend reading this BYU devotional talk by Alwi Shihab, a respected Indonesian Muslim who calls not just for tolerance but for greater understanding and respect between Muslims and Christians. Here is one quote from the address:

"Let me suggest, dear brothers and sisters, that religious tolerance is not enough. We have often seen—particularly after the tragic events of 9/11 and, most recently, the Danish cartoons of the Prophet Muhammad—that tolerance does not always lead to true social peace and harmony. To tolerate something is to learn to live with it, even when you think it is wrong and downright evil. Often tolerance is a tolerance of indifference, which is at best a grudging willingness to put up with something or someone you hate and wish would go away. We must go, I believe, beyond tolerance if we are to achieve harmony in our world. We must move the adherents of different faiths from a position of strife and tension to one of harmony and understanding by promoting a multifaith and pluralistic society. We must strive for acceptance of the other based on understanding and respect. Nor should we stop even at mere acceptance of the other; rather, we must accept the other as one of us in humanity and, above all, in dignity."