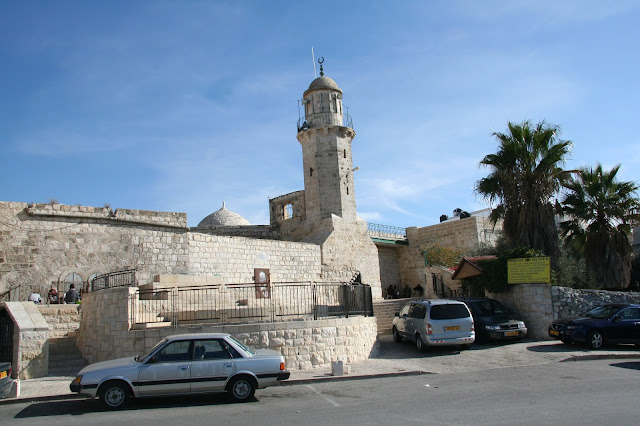 Today we walked southward along the crest of the Mount of Olives. Our first stop was at the Dome of the Ascension. It is now a Muslim mosque, but once upon a time it was a large Byzantine church with an open dome over a rock imprint of the foot of Jesus as He left the earth to ascend into heaven. A crusader church came next and then a Muslim mosque. 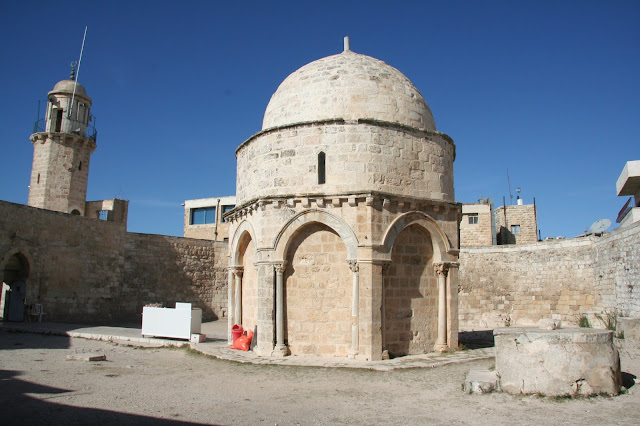 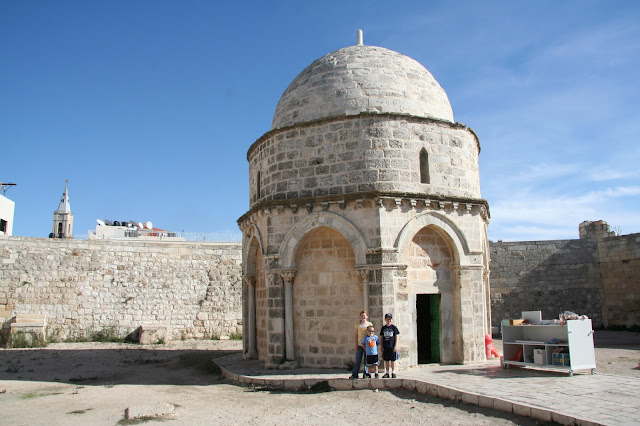 The small dome of the ascension is surrounded by an octagonal wall that is built along the foundation and ruins of the crusader church. On the feast of the ascension (forty days after passover) Eastern Christian churches are allowed by the Muslims to come and pitch large awnings and camp over night in this walled enclosure. In the morning worship services are held at several stone altars that remain behind the dome. It is a nice example of shared sacred space and religious tolerance. The Russian Orthodox Steeple of the Ascension is in the distance. 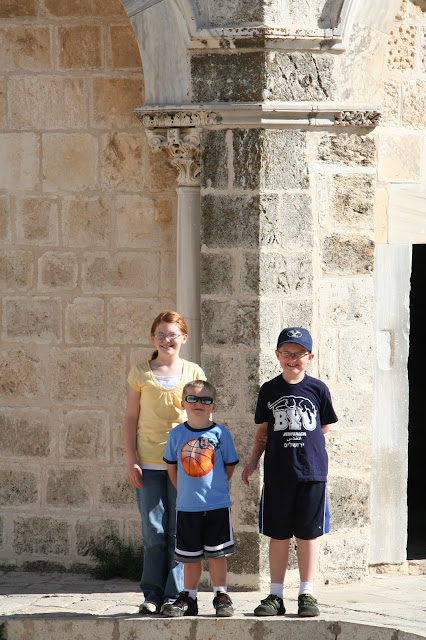 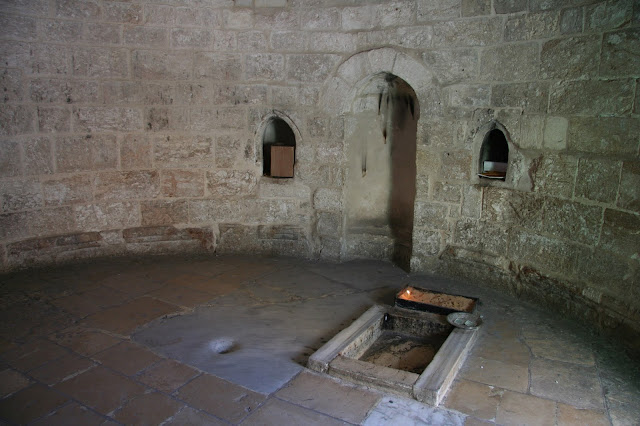 The mihrab (niche) in the south wall points the prayer direction to Mecca. A larger mosque is located next to the entry door so this "mosque" mainly serves as a place of pilgrimage for Christians. 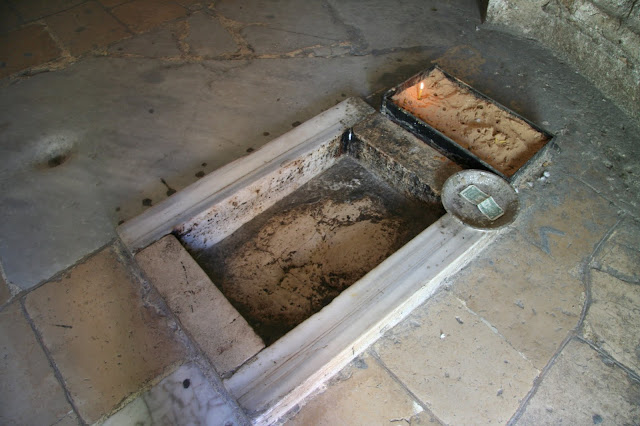 The stone rectangle encloses a stone with a foot print--or so people believe. 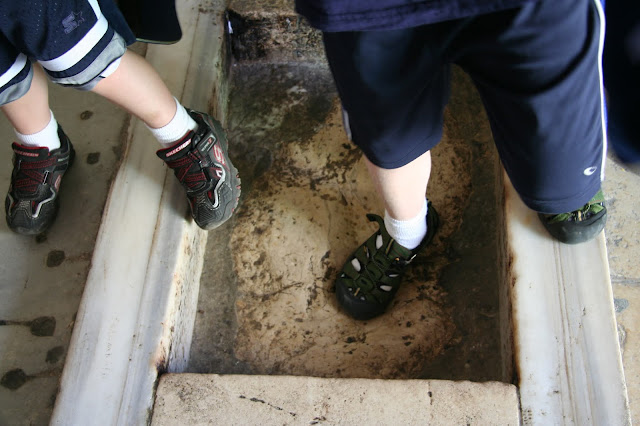 The ball of Joel's foot is set right into the print. 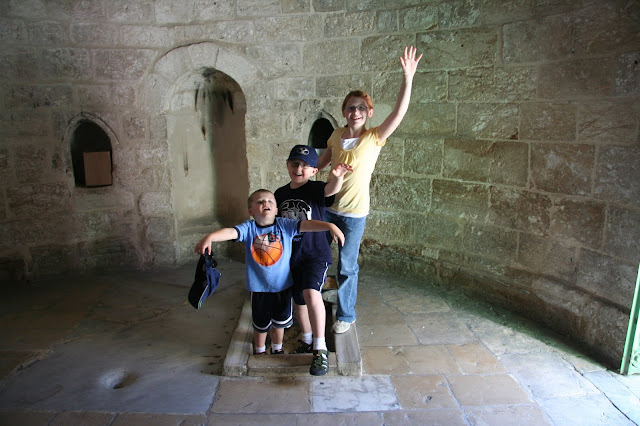 Pretending to ascend. They could also be shouting Happy Birthday to Grandma Tueller in Lehi. 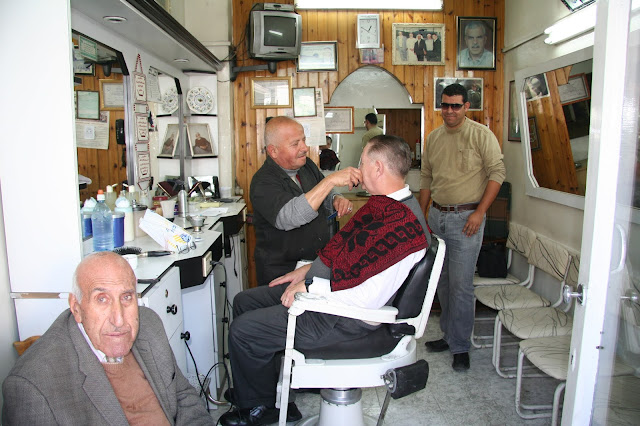 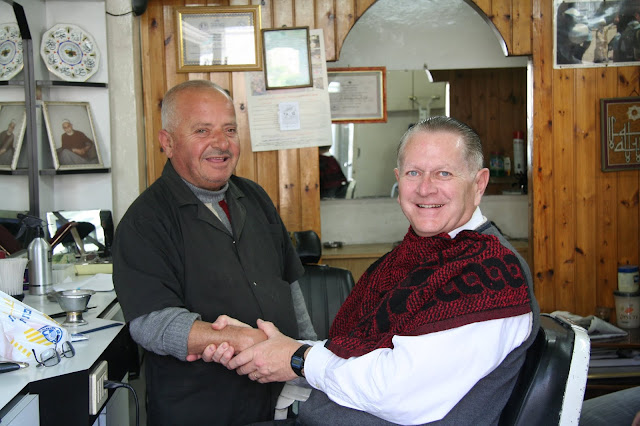 Walking northward we stopped to buy a dozen eggs at a small shop. All the eggs come in a flat of 30 and so instead of cartons the eggs were gently placed in a paper bag and then carefully carried home by Marie. We then stopped at a small eye glass store. Bilal straightened and tightened glasses for Marie, Sarah and Joel. When I offered to pay him all he said was " go home!" Nice guy. Next stop was Fuad's barber shop. When we passed by earlier, Walter Whipple (a host and organist at the center) was getting his hair cut. When Fuad first cut my hair six weeks ago, he cut it very short and then put some sort of oily tonic on my hair (the kids loved (not) my new look--which lasted only long enough for me to wash it). This time I turned down the tonic. Fuad cuts hair the old fashioned way including a razor trim around the neck. 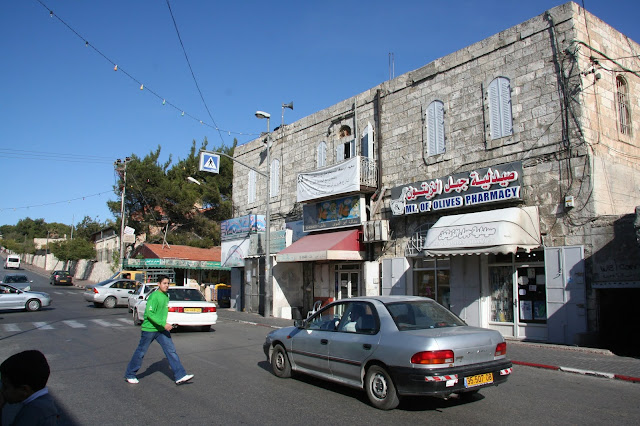 From the front of Fuad's we look north to "crash corner" where the main east/west road up the Mount of Olives from the Kidron Valley and then down the backside intersects with the main north/south road. The intersection has no lights, stop signs or yield signs so it is always a free-for-all, hence the name crash corner (I believe the name was bequeathed by a previous service couple). The Mount of Olives Pharmacy on the right is where we got the antibiotic for Sarah's strep throat last week. One of the service couple men (Brother Bob Allen) is a retired family practitioner. He and his wife go on every out of country field trip to help with those who get sick. He also treats anyone at the center. He cannot write prescriptions in Israel, but he has worked out an arrangement with this pharmacy for BYU folks to get prescription medicine when needed and when authorized by Brother Allen. 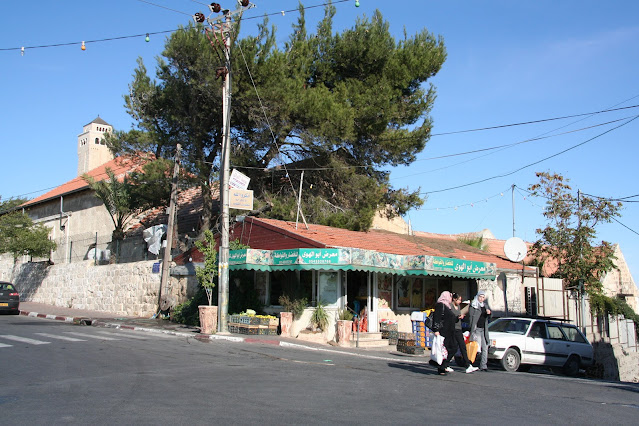 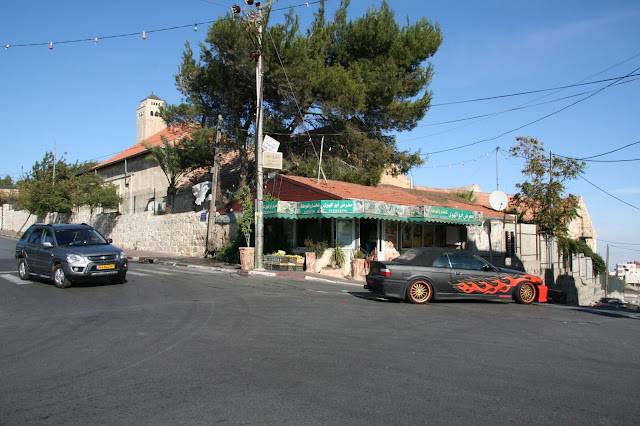 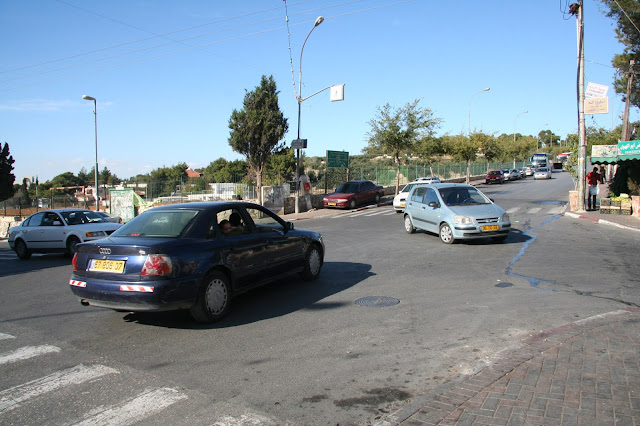 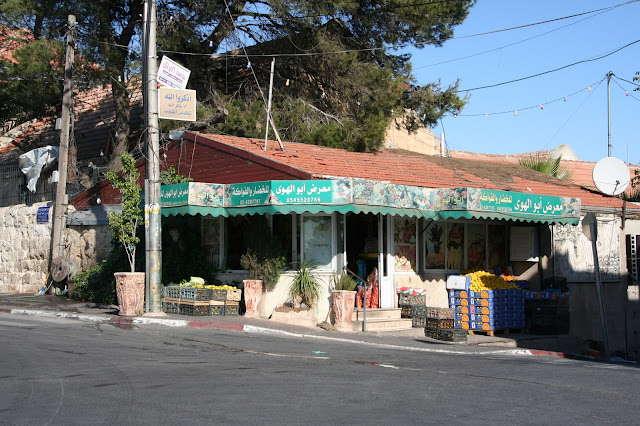 The green grocer at crash corner. It is one of three nice produce shops that we like to frequent. 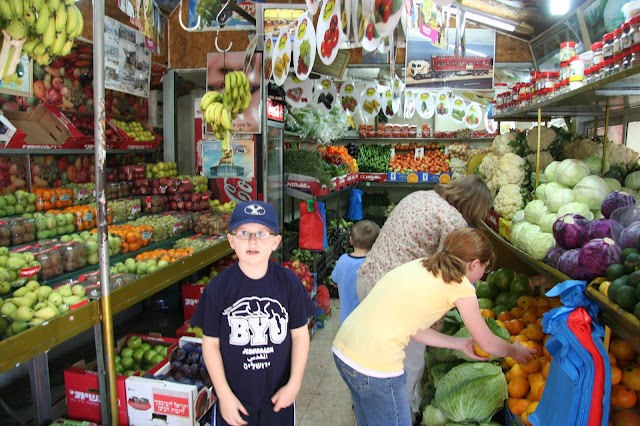 Note the huge cauliflower above Marie's head and the huge cabbage below Sarah. Tomatoes and cucumbers are year round staples. 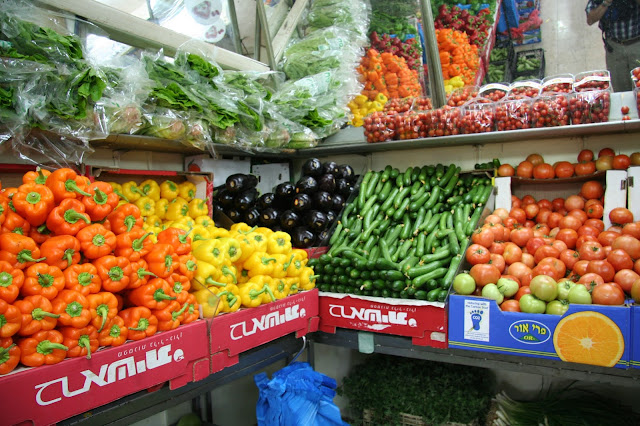 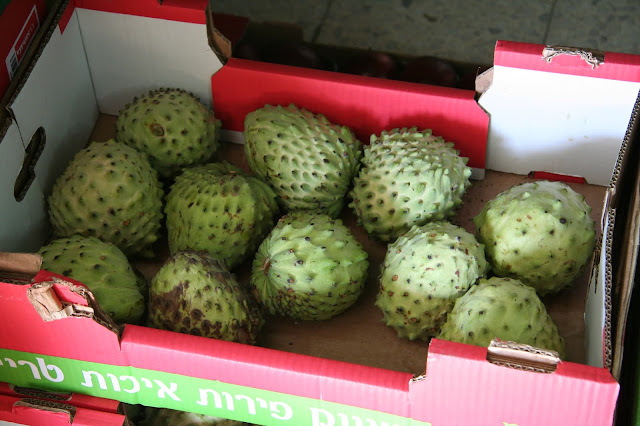 I enjoyed great mangoes when we first arrived. Now I am enjoying persimmons and these custard apples (which I enjoyed in Indonesia). Citrus season is just beginning so the kids have sliced oranges every morning for breakfast. 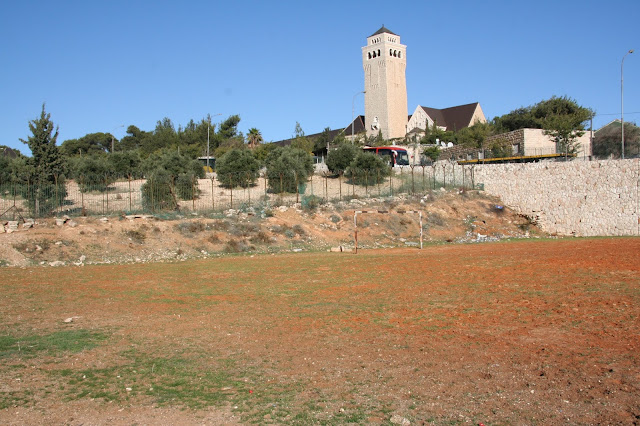 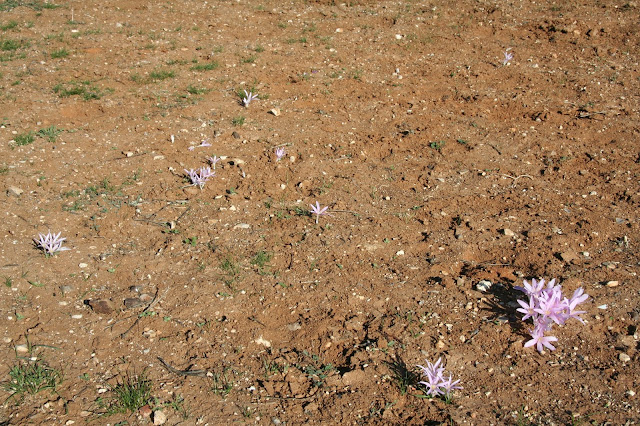 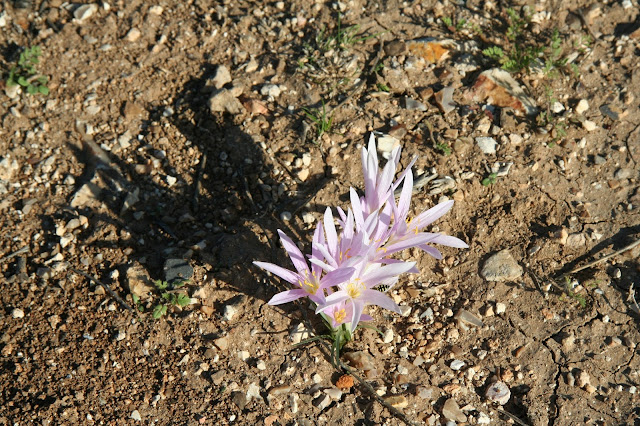 Crossing a large dirt soccer field on the NW corner of crash corner I noticed these wildflowers popping up--they are the by-product of a good rain storm a few weeks ago (the first rain mentioned in Deuteronomy 11:14). With that rain the brown hills are slowly turning green as grass starts to grow after the long dry season. Will's walk to and from preschool passes a great view down through the Judean Wilderness to Jericho. He has designated this area (a nice example of a rain shadow) as the "sandy place" because from his vantage point it does look sandy. He has since noticed that the dusty tan hills of the Judean wilderness are slowly turning green. What an observant boy! Our after lunch walk felt a lot like an early fall day in Utah. We like the cooler weather and the bright clear days. 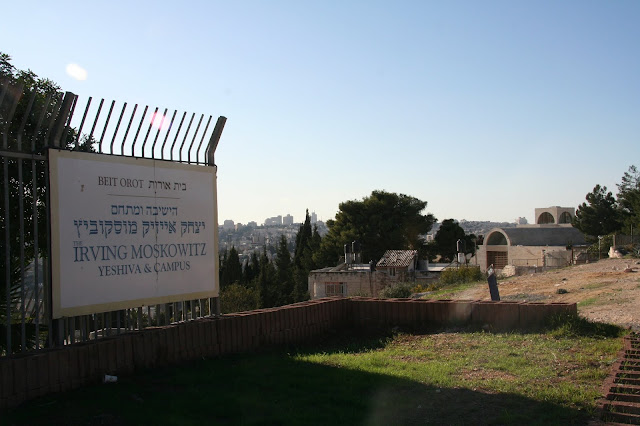 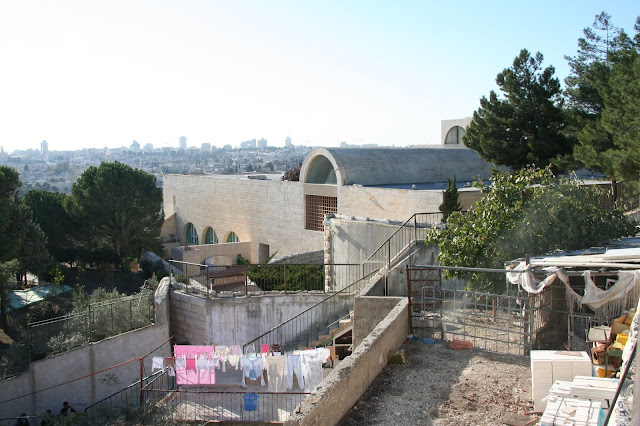 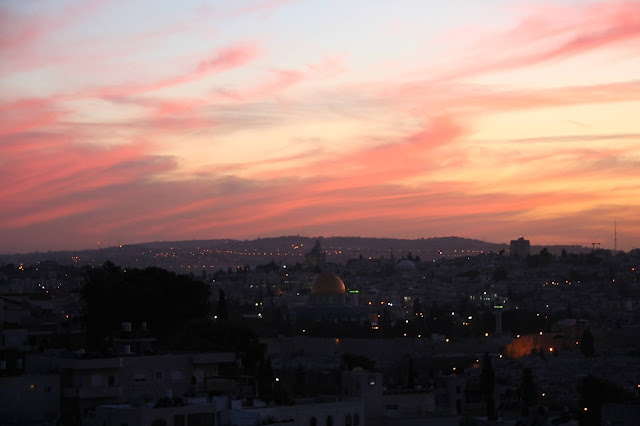 A nice sunset over Jerusalem (taken from our balcony). 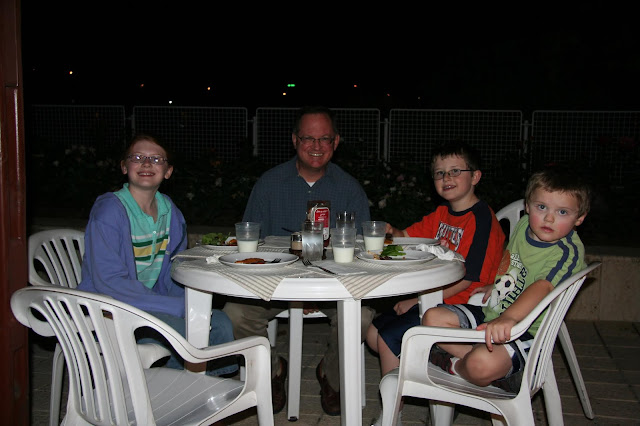 Dinner on the balcony from earlier in the week. 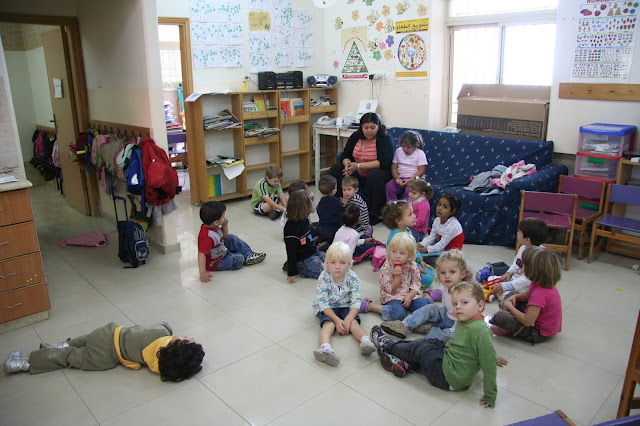 Will's preschool (from earlier in the week) at Augusta Victoria. There are seven foreign kids and twelve Arab kids. This was singing time where they are learning Christmas carols in Arabic, English and German. Tomorrow I leave for the Galilee for 11 days of intensive New Testament classes and field trips. This is always a favorite for the students. Marie and the kids will come up on Friday after school to join me for the final week.