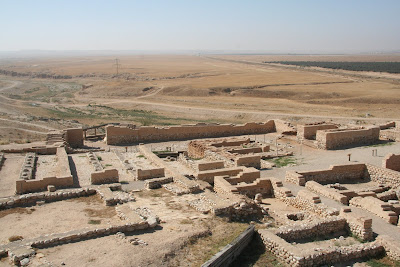 On Thursday May 14th at 6:30 Am we left for the Egypt field trip. The first day focused on the Negev (south) desert. Our first stop was Tel Bersheva. Ancient Beersheva was the southernmost settlement of the Israelites (from Dan to Beersheva). It is here where Abraham left on his journey to Mt. Moriah to sacrifice Isaac. It is also here where Abraham made a covenant with Abimelech to share water by digging seven wells. Beersheva means well of the covenant or seven wells. This photo looks south. Just beyond the main entry gate hidden behind the wall is a deep well. Beyond the town is a wadi (intermittent stream bed). During the winter its waters, and the waters from another wadi on the north side of town brought life giving waters to the cisterns of the town. 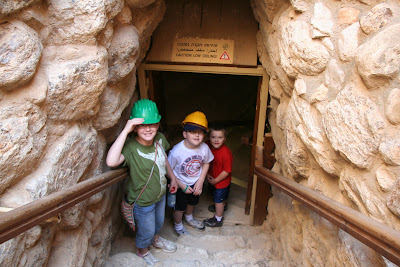 We all donned hard hats to climb down into the large cisterns that along with the wells allowed people to live in a region that averages only 6 inches of rain a year. 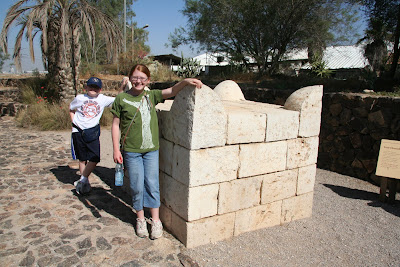 This horned altar (actually a model of the original that is now in the Israel museum) was part of a small temple complex found here until most likely destroyed under the reforms of king Josiah. The altar was used for animal sacrifices and its horns also provided a place of refuge for people who have committed man slaughter and need protection by holding on to the horns until they can get a fair trial. 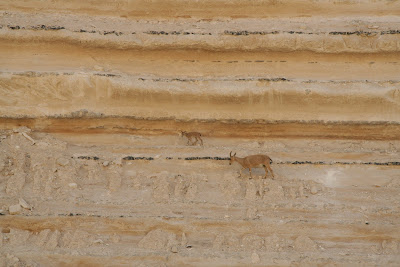 Our usual next stop was Sde Boker--the kibbutz founded by first prime minster David Ben Gurion who really wanted Jews to settled the desert and so he decide to practice what he preached. At his burial site there is a great view south into the Wilderness of Zin. This time we decided to try something new so we skipped Ben Gurion and instead hiked through Wadi Avedat. Faculty, students and Emmett children all loved the change. As we walked up the wadi we saw Ibex walking along the steep sandstone walls. 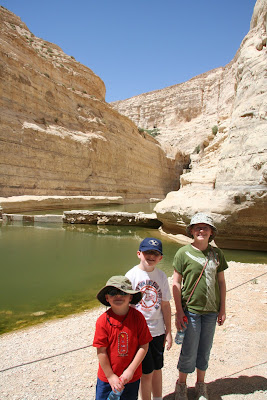 The children of Israel spent most of their 40 years wandering in this wilderness. They would most likely have camped in areas like this where there was year round water. At one point in this wilderness Moses brought forth water from a rock by smiting it twice with his rod-- he was told by Jehovah to call forth the water from the rock (Numbers 20). The bible teaches that this minor infraction of not completely obeying God was why he was not permitted into the promised land. 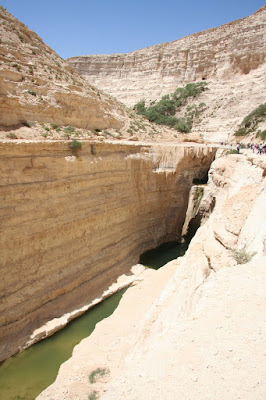 The bus dropped us off at the lower end of the wadi and we hiked along the steam bed, then we climbed up around the falls to a higher set of pools and vegetation. 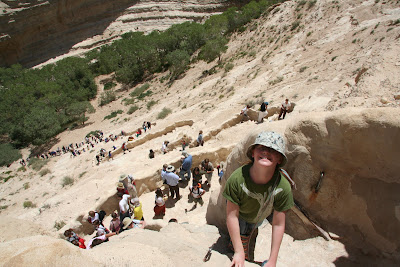 We then climbed up to the top of the plateau. 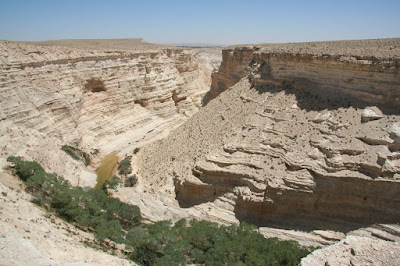 The view back down the wadi. Sde Boker is the green hill in the far distance at the top center of the photo. 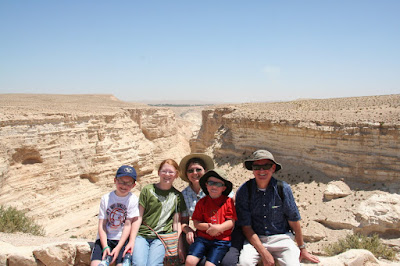 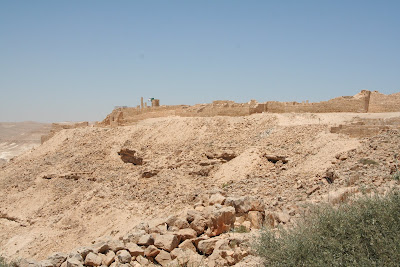 Next stop just a few miles south was Avedat--an ancient Nabatean town. It was on the trade route connecting Petra to the Mediterranean coast. 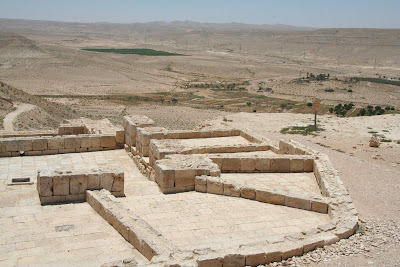 The Nabateans were able to survive in the Negev through unique irrigation practices in which rain water from large catchment areas was channeled into agricultural plots like the one down in the valley at the foot of the tel. They were able to grow enough food to make good use of this large wine press. 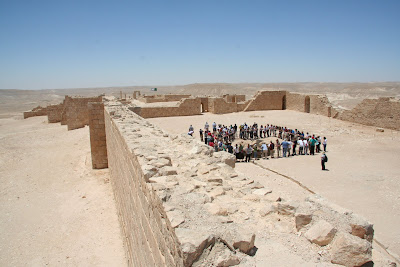 Students gathered around a cistern in the center of the Nabatean fortress. 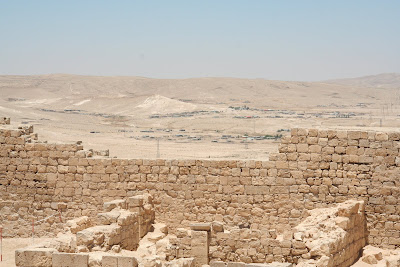 Beyond the wall of Avedat in the distance is a Bedouin settlement--this is part of Israel so these Arab are citizens of Israel. Last fall just a few weeks after visiting here with the first group of students, two Bedouin from a similar settlement further to the north sneaked into Avedat at night and pulled down many of the restored columns. They were angry that the government of Israel had designated their settlement for demolition in anticipation of an incoming Israeli Jewish settlement. 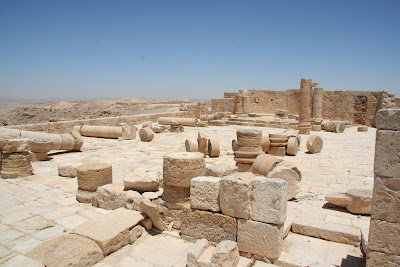 The tumbled columns have still not been righted. Israelis were obviously angered over this attack on a world heritage site. Additionally there were a few justice minded Israelis who wrote articles calling for an equal outcry over the demolition of Bedouin homes and towns. They made a good point that destroying of living homes is just as egregious as the destruction of antiquities. 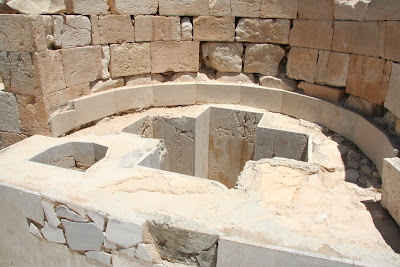 After the demise of the Nabeteans, Byzantine Christians lived in Avedat. Here is a cross shaped baptistery. 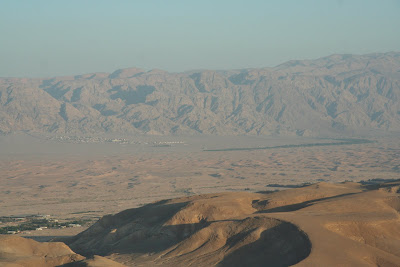 After a brief stop at the large crater of Maktesh Ramon we drove down in to the Arava (rift Valley) to Kibbutz Ketura for a tour. The Israel/Jordan border runs through the middle of the valley. The far mountains and foothill village are part of Jordan. 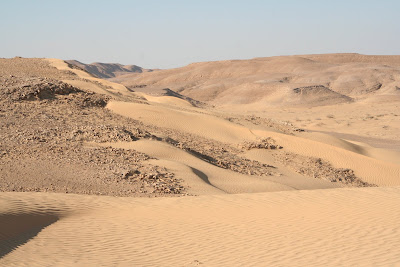 We then headed out into the desert for a final wilderness experience hosted by the Kibbutz. 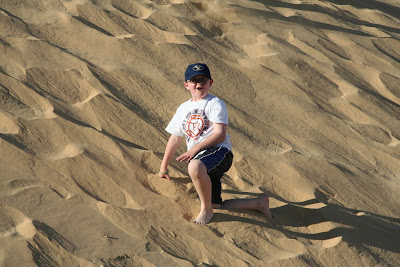 Everyone loved playing in the large sand dunes. 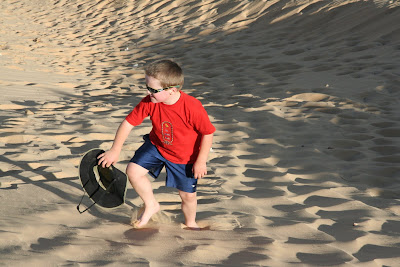 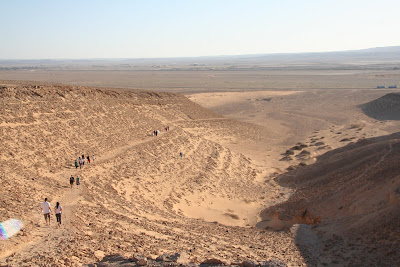 Walking from the dunes back to the buses. Back at the kibbutz we had a pool side bar-b-que and some fun swimming. It was a long but fun day. I think we all have a greater appreciation of wanderings and murmurings.
Posted by chad at 4:54 AM