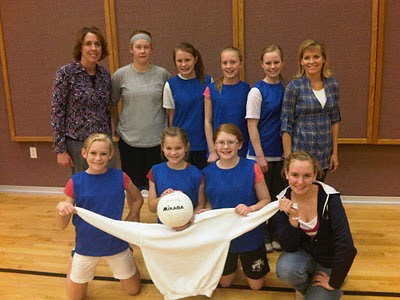 Sarah and the other amazing young women of the Spring Creek 18th ward won the regional (they don't use that term any more, but that is what it really was) volleyball tournament tonight. They played five teams and only lost one of the 11 games in the five sets in a tiring five hours of playing and waiting. Sarah is a much improved player this year and (much to her often surprise) was able to more often than not serve and bump the ball over the net. She is still a little reluntant to go after the ball, but it was all a good enough expereince that she plans to play church ball again next year (not the same for city league volleyball which is too intense and winning focused). Marie and I tag teamed watching her games. In betweeen the boys and I watched a nice movie: Sign of the Beaver. I'm sure part of the reason the girls were able to do so well is that half way through the long evening, Marie went and bought a big bag of Sour Patch candy for the girls to eat.
Posted by chad at 11:56 PM