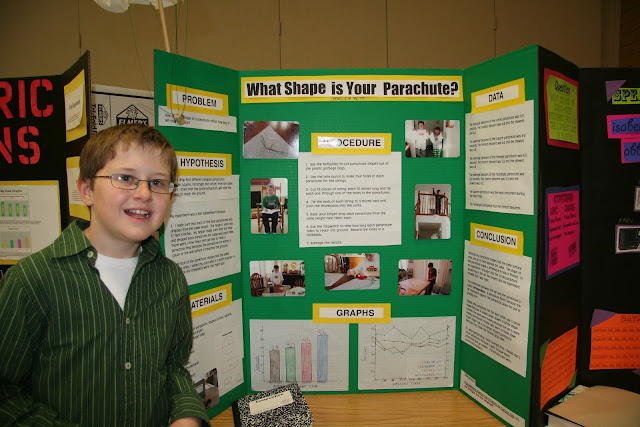 Joel at the 5th grade science fair. His experiment (with help from mom) about what is the best shape for a parachute (circular, not triangular, rectangular or square) won him a trip to the district science fair next week. 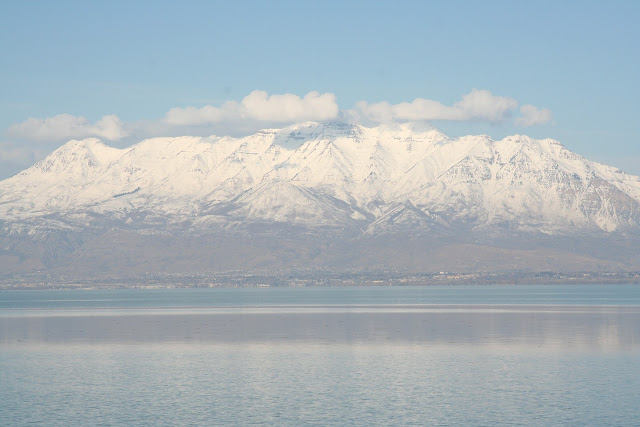 Mt Timpanogos and Utah Lake taken during a Sunday afternoon ride to the southwest shore of Utah Lake. 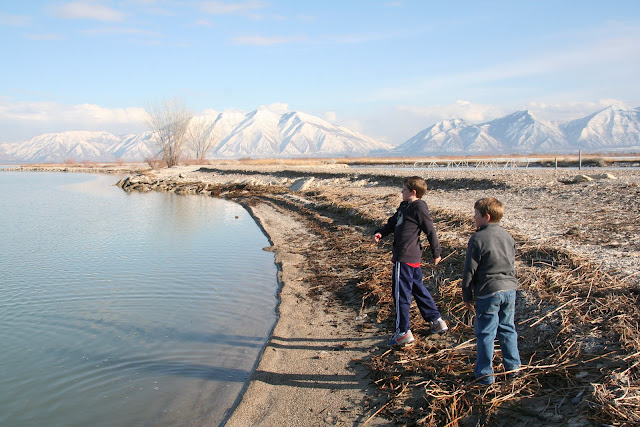 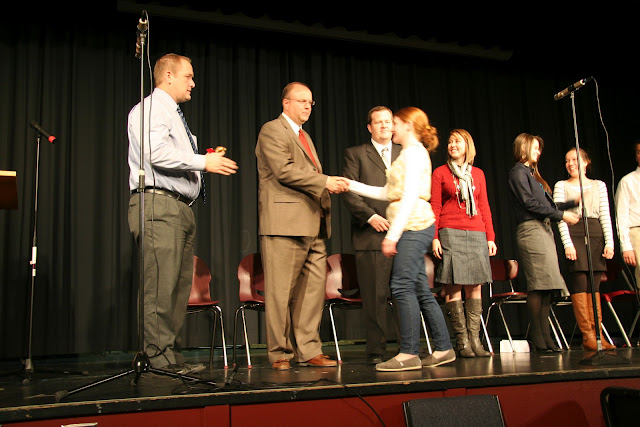 Sarah receiving her "Super Knight" award  at a Springville Jr. High assembly. Each month two students form each grade are selected by faculty for the award. It is primarily a citizenship award for good students. Sarah's English teacher noted that she expects to see Sarah's name in print some day as an award winning author. Her Social Studies teacher commented on Sarah's great participation in class. Way to go Sarah! 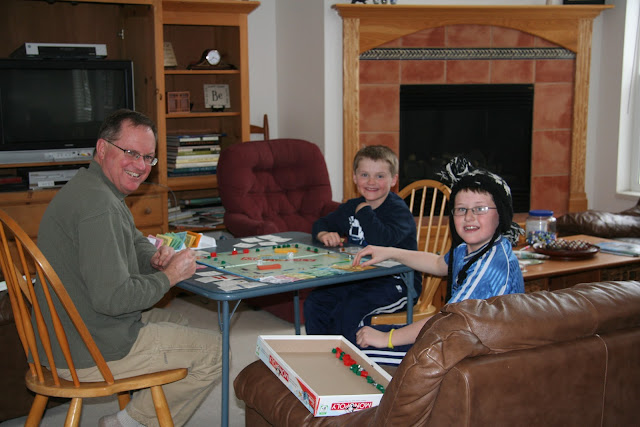 Sunday Afternoon Monopoly game, Joel won and dad lost.  Joel's hat is a gift from his cousin Eli who is living in Nepal with his family.  He loves to wear it around the house. Will has one too and they both wear them skiing. A great, exotic, useful Christmas gift. 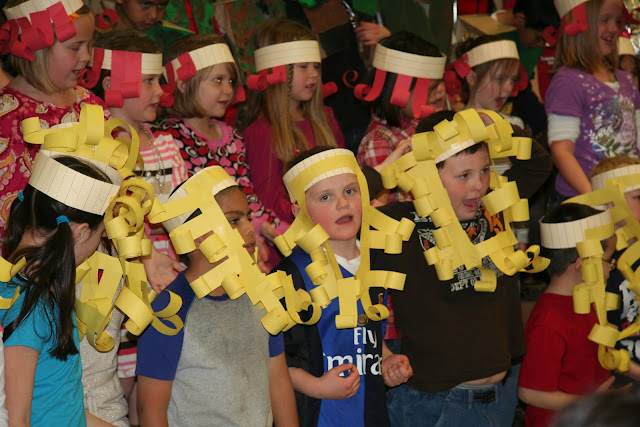 Will as a lion in the first grade production of the "Little Engine that Could." He knew all the words and sang/spoke out loud.

For President's day weekend we drove to St. George for the Icebreaker Soccer tournament.  On Saturday morning I interviewed Jacob Hendrikse who as a young boy lived in Surabaya Dutch East Indies. His father was in the Dutch Navy. They were LDS converts from the Netherlands. In the 1930s, the Hendrikse family along with two other LDS Dutch Sailors were probably the first group of Latter-day Saints to hold sacrament services in Indonesia.  Jacob was later a prisoner of war where he was forced to build bridges for the Japanese along the River Kwai (more details to come in my book).

Joel's team played and lost both games on Saturday. In the 11-1 loss to a premier team, Joel scored the only goal for his team. After a day of soccer dad and boys enjoyed a twilight swim in a heated outdoor pool. 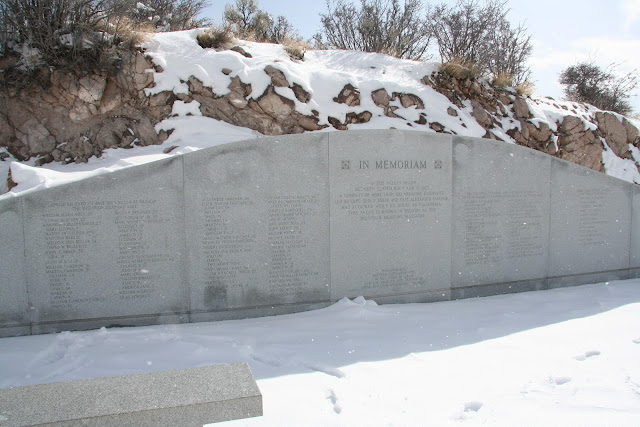 On Sunday we drove via Santa Clara, Shivwits, and Gunlock--a beautiful drive--to Veyo (the name of the town stands for Virtue, Enterprise, Youth and Order) for an 11:00 sacrament meeting. We then drove north to the sobering Mt. Meadows Massacre site. Here is a memorial (on an adjacent hill top) to the 120 California bound pioneers from Arkansas who for whatever mix of reasons were massacred (including many of the children) by Mormon pioneers and local Indians. It is sad to note that people of all religions can at times run amok.

For more info go to:
http://www.mtn-meadows-assoc.com/NewPlaques/plaques.htm#THE%20MOUNTAIN%20MEADOWS%20MASSACRE 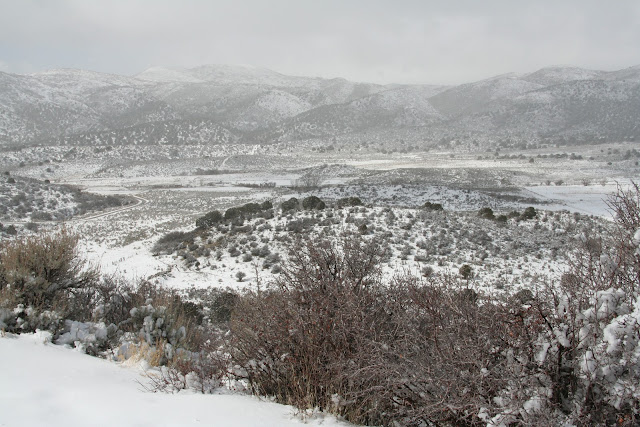 The initial massacre of men took place down in this valley along the route of the California Trail. A memorial now marks that site. 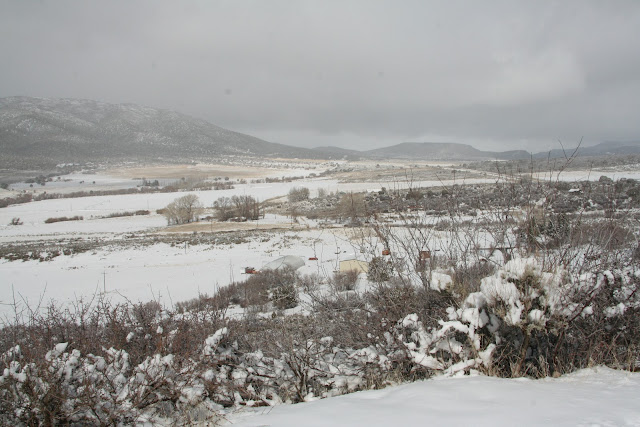 Over the next few days the rest of the party was massacred to the northeast. 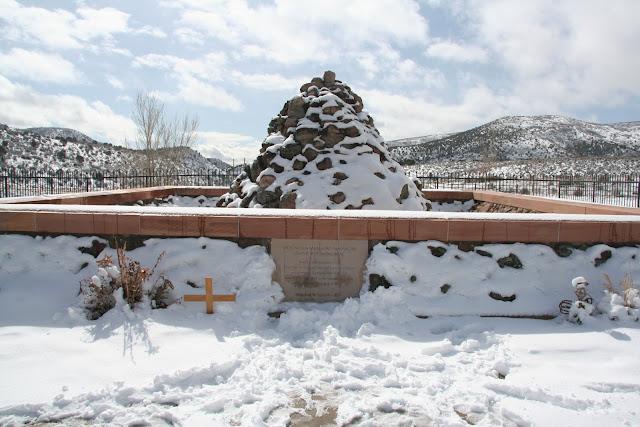 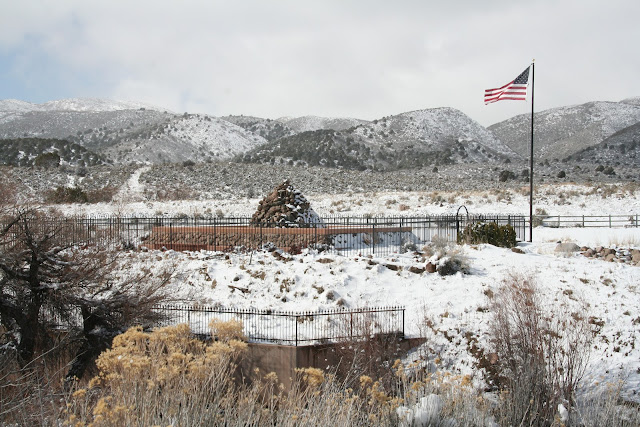 Snow had fallen overnight and was wet enough for some good snowball throwing. 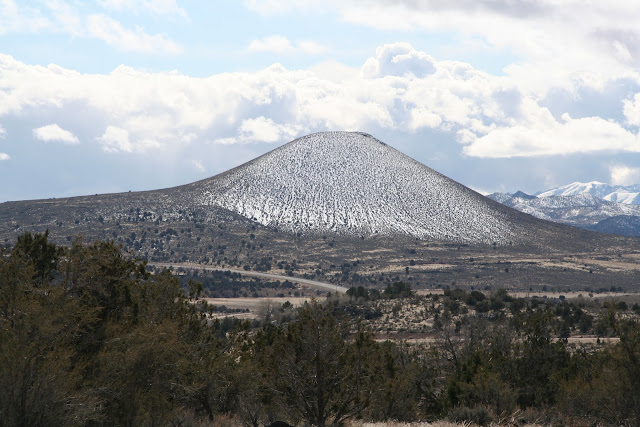 An ancient volcano outside of Veyo. 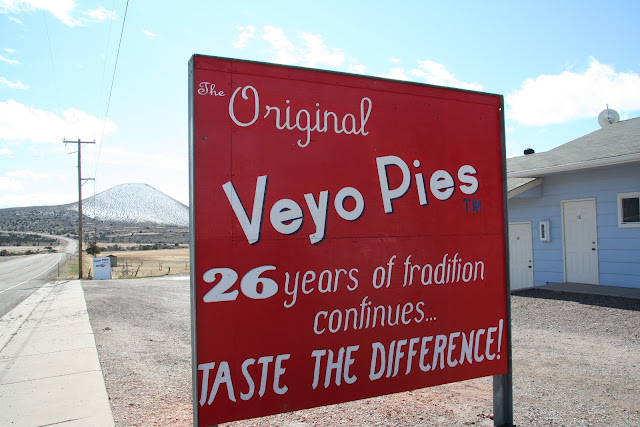 On the way back we stopped in Veyo to buy some delicious rhubarb raspberry pie that we then took later in the day to share with Marie's Aunt Diane (her father's sister) and Uncle John. 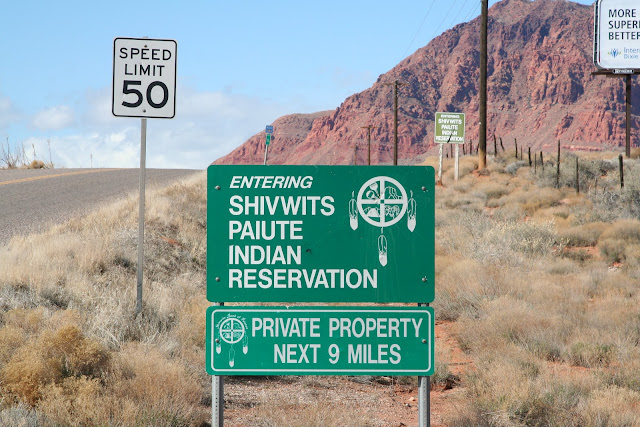 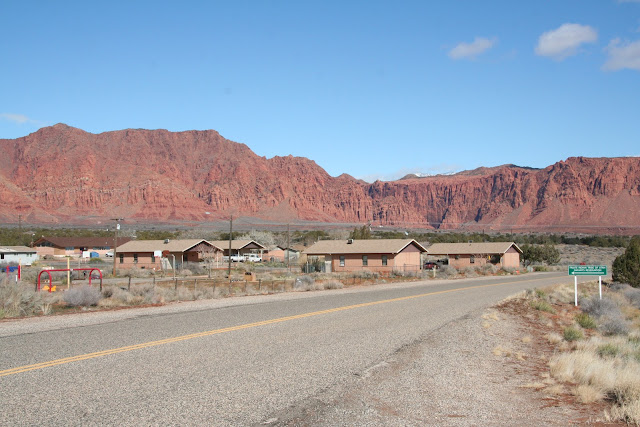 Not too many Paiute Indians live in the Shivwits reservation.. Only about two dozen houses. 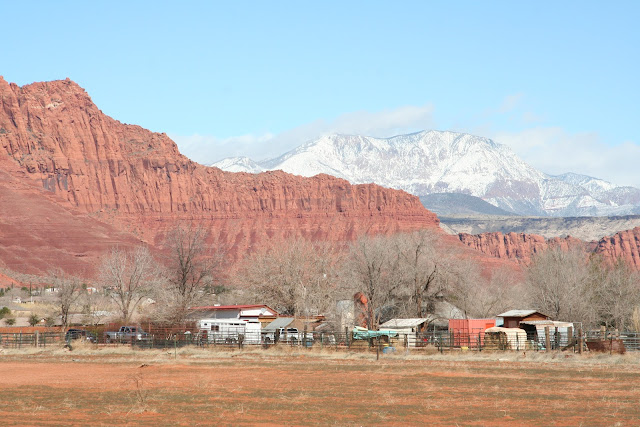 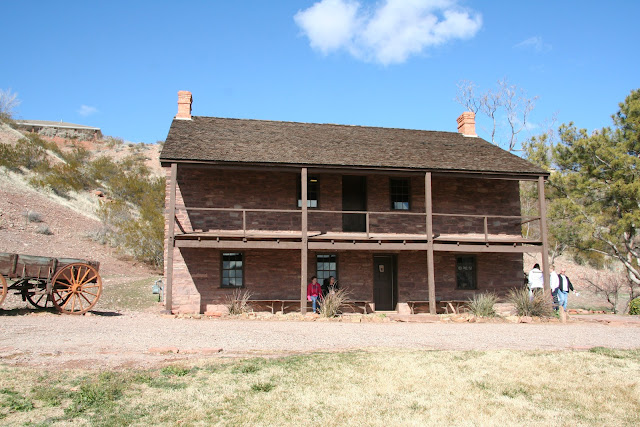 Took a tour of the Jacob Hamblin home--a Mormon pioneer who was a great friend of the Indians. 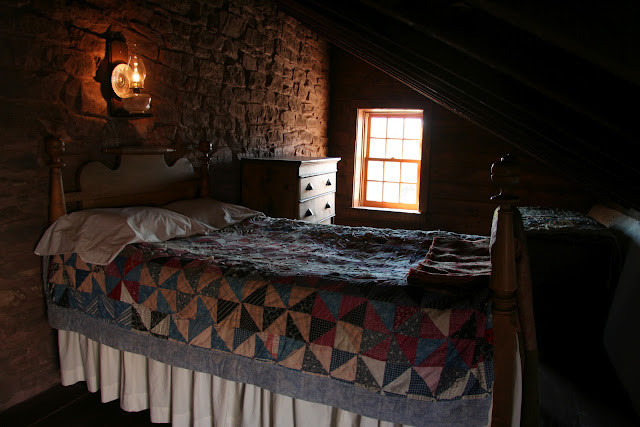 Part of the upstairs girls bedroom. 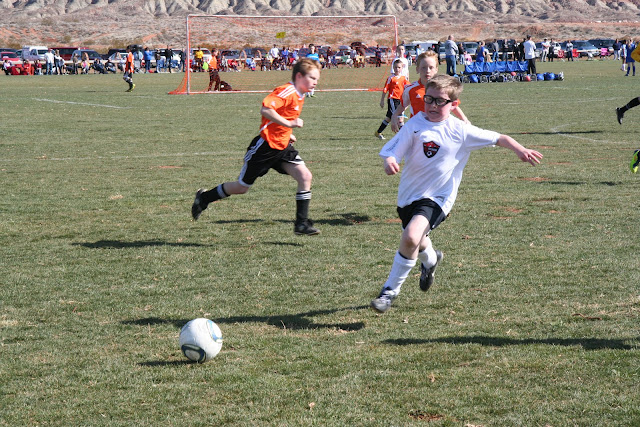 On Monday Joel scored one more goal in the consolation game which was their only win. 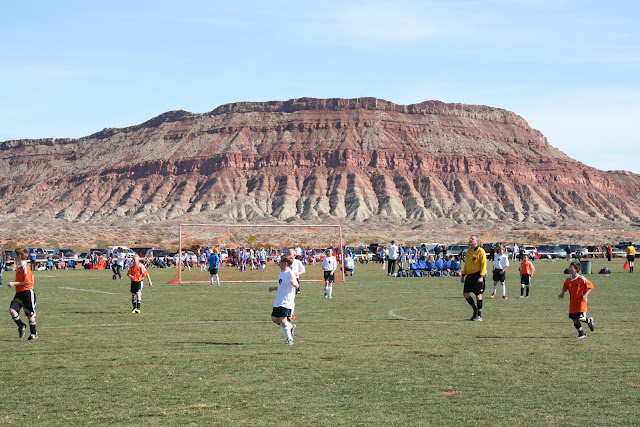 We played at Staehli farms in Washington Fields. There were 17 simultaneous games going on with soccer clubs from all over Utah. Impressive backdrop.
Posted by chad at 1:50 PM