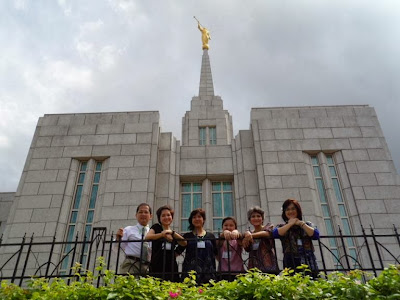 Juswan and Aischa Tandiman in front of the Cebu temple earlier this year with their four daughters Bianca, Vanessa, Priscilla and Patricia. They all went to the Cebu temple following Vanessa's service as a missionary in Indonesia and just prior to Priscilla beginning her service in the Cebu Mission. (Oldest daughter Bianca served in the SLC Temple Square Mission).

Years ago as a missionary in Jakarta Indonesia I had the pleasure of getting to know young Juswan Tandiman and Aischa Meyer--both impressive youth in the branch. After they both served missions in Indonesia they attended BYU-Hawaii, got married, settled in Jakarta, and raised four talented daughters. They have faithfully served in many church callings. Brother Juswan is currently serving as the first patriarch of the relatively new Jakarta Stake. Our friendship has continued throughout the years. Sister Aischa sends out weekly letters to the missionaries who served with them when Juswan was mission president. I was happily added to her mailing list because of my on-going project writing about the history of the LDS Church in Indonesia. In yesterday's letter, Aischa sent along these three photos with the last two coming from their third daughter Priscilla who is currently serving as a Mormon missionary and weathering the natural disasters in the Cebu Philippines mission. (Marie's niece Josie Tueller is also currently serving in that mission)

In the top photo, Moroni is facing forward to blow his trumpet. 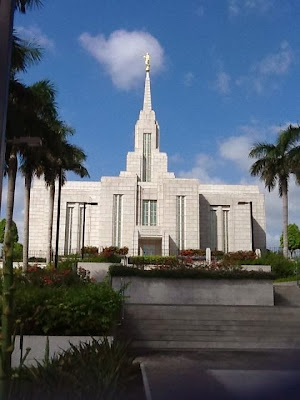 After the 7.2 Cebu earthquake a few months ago, Moroni shifted his stance and started blowing more to the left. 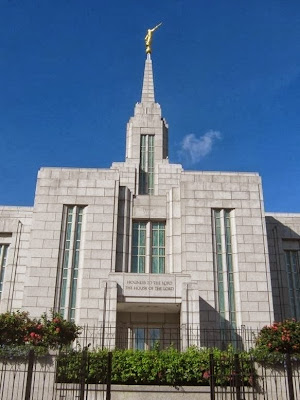 Then, after the strong winds of Haiyan (aka Yolanda) blustered through Cebu, Moroni shifted his stance again and started blowing to the right.

Sister Aischa summed it all up: "Moroni is quite the dancer, isn't he?"