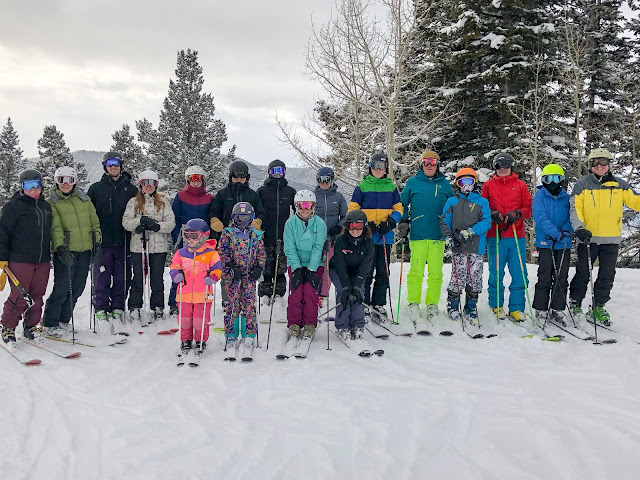 My dad always said: "The family that skis together stays together." So on March 3 (the third anniversary of the death of my mom Norda Emmett) over 30 Emmetts gathered for a fun day of Skiing at Beaver Mountain. Five of John and Norda's six kids came with many of their children and grandchildren.

Our family left Springville at 6:10 on Saturday morning for the 2 1/2 hour drive northward to Beaver. Ever changing weather forecasts of a fickle, unpredictable storm that came, pulled back, stalled and then moved forward again prompted us to not drive up on Friday night (we thought it would be stormy--it wasn't). We also worried that we would be caught in a storm driving home Saturday evening--we weren't. 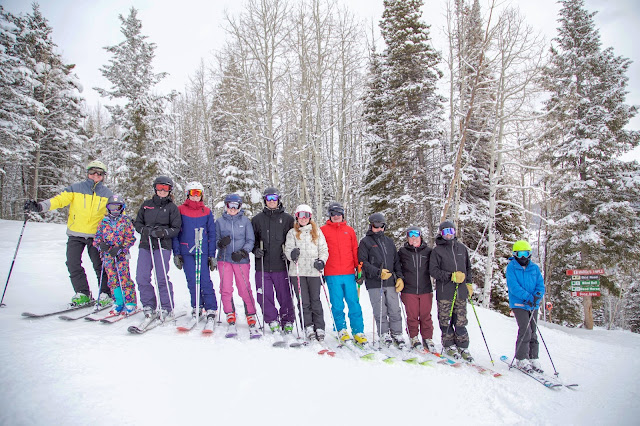 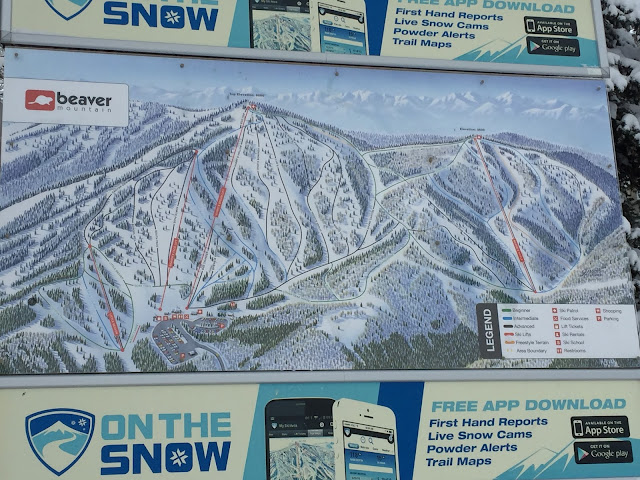 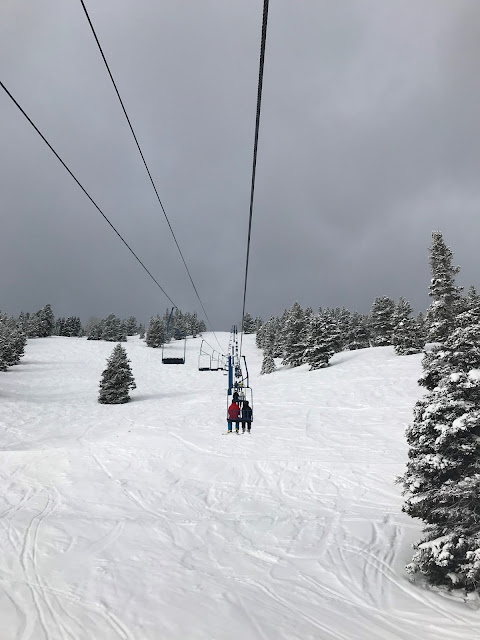 It snowed on and off Friday afternoon and early Saturday morning so we were treated to about 6 inches of new snow.  Our first run down south face--far left in the above photo) was lots of fun. 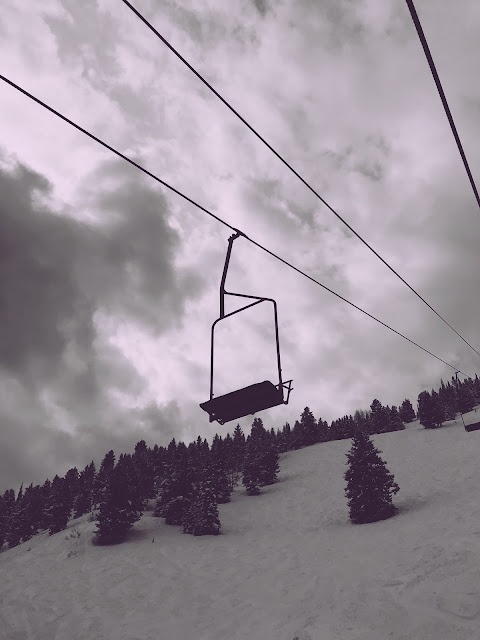 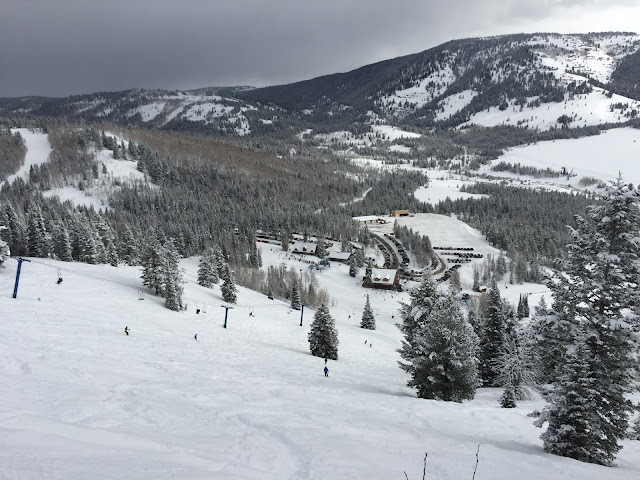 Joel (left) and Will (right) heading down the lower Face. 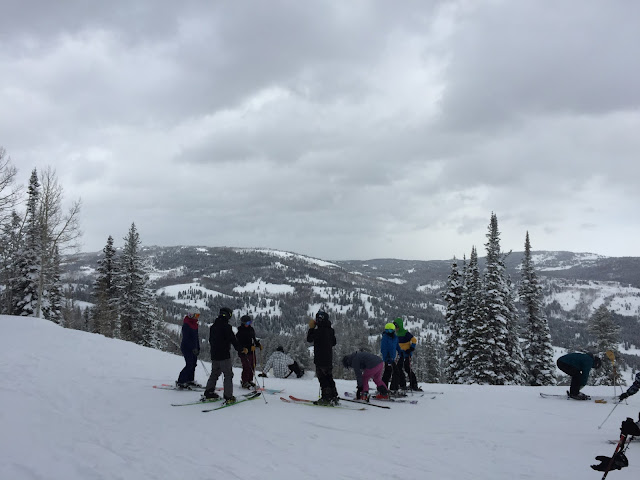 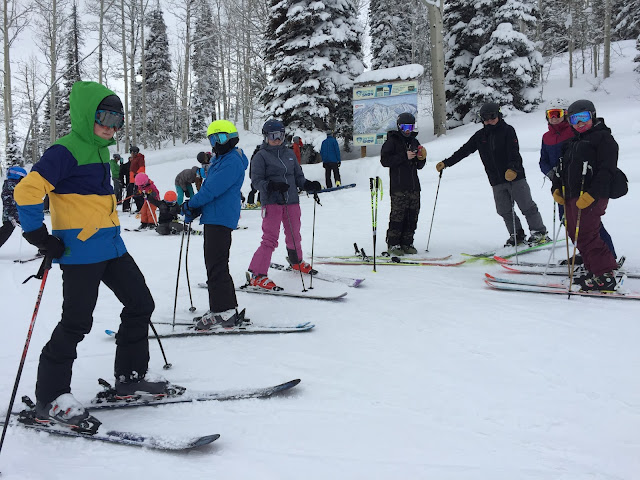 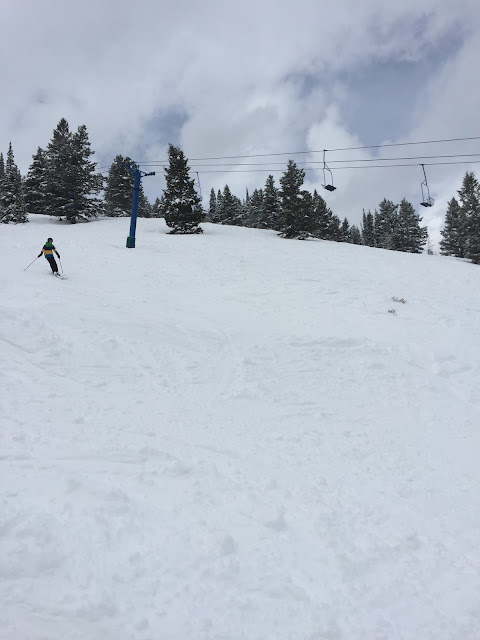 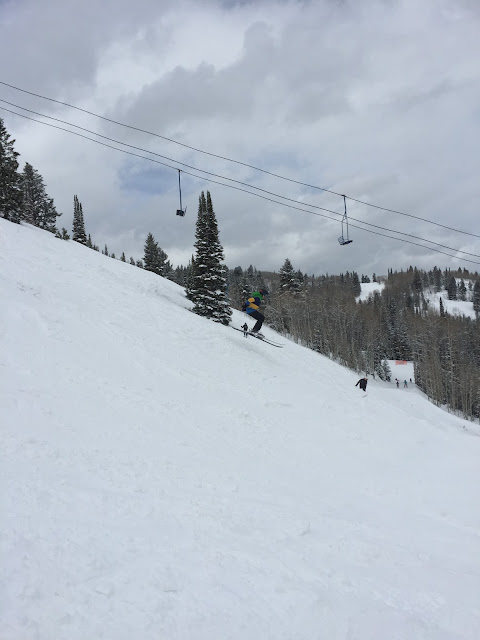 Joel getting some air. (For a nice video of him skiing the powder check my Instagram) 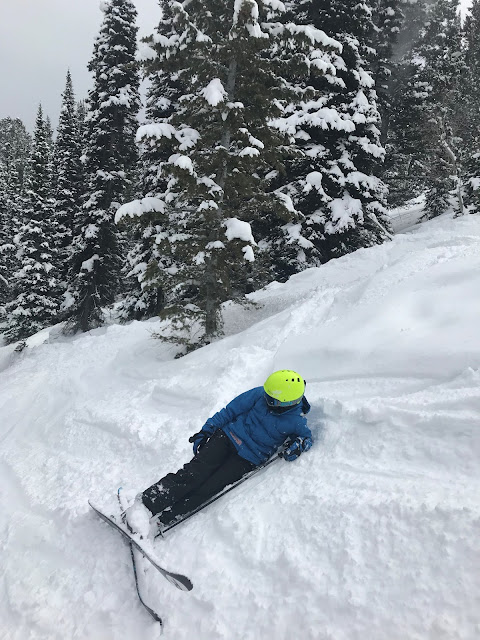 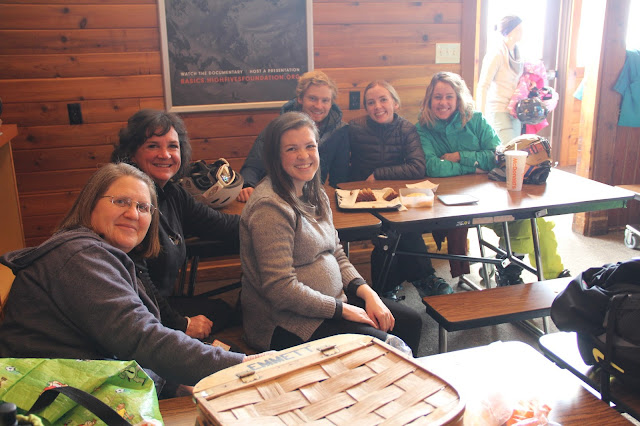 At 11:15 (to beat the crowed in the sack lunch section of the lodge)  we gathered for a lunch of banana bread and sharp Cache Valley cheese. I brought our two loaves of banana bread in this lovely picnic basket that over the decades has carried many a lunch to Beaver. 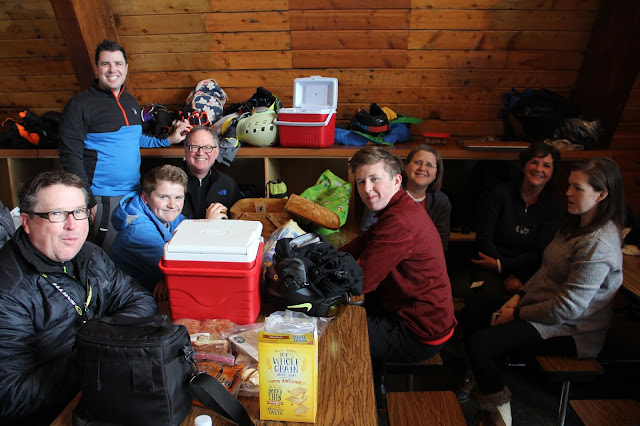 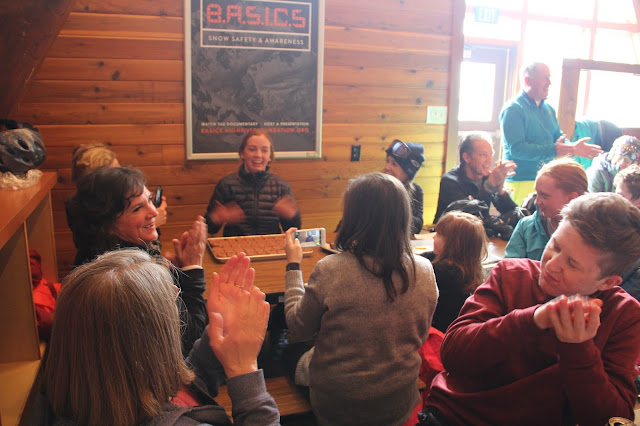 We sang happy birthday to my niece Jamie Lundberg Doxey. Marie was kind enough to save four large tables for all of us to use. 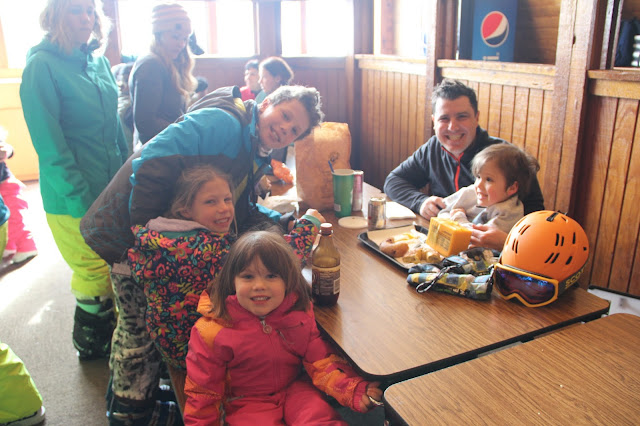 John and Beth Emmett brought their five kids. It was twins Emmaline (front) and Timothy's (in his dad's lap) first time skiing. 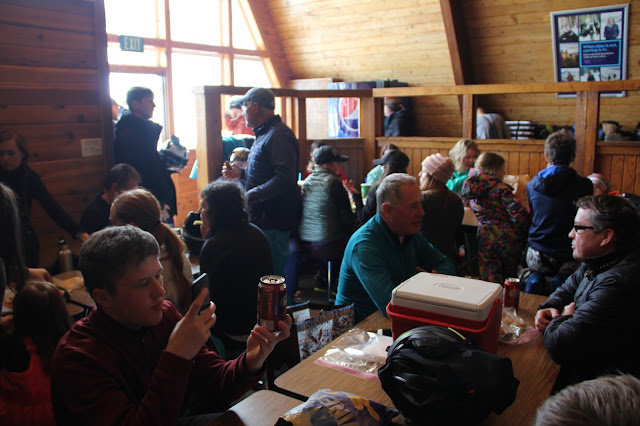 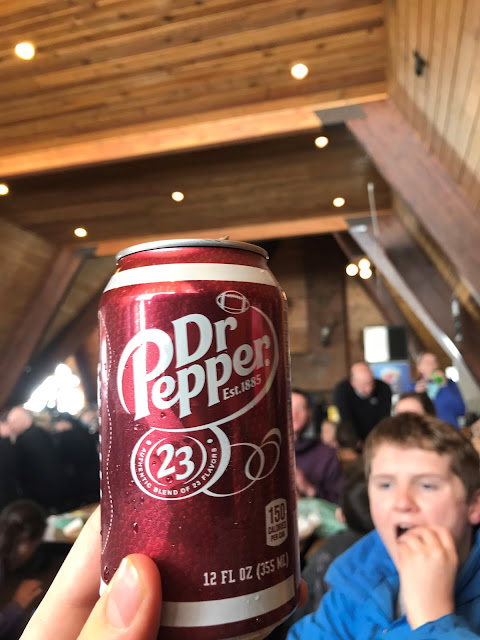 Dr. Pepper is also part of the tradition. Joel and Will are not regular soda drinkers, especially during soccer season, but they happily imbibed in the name of family solidarity. 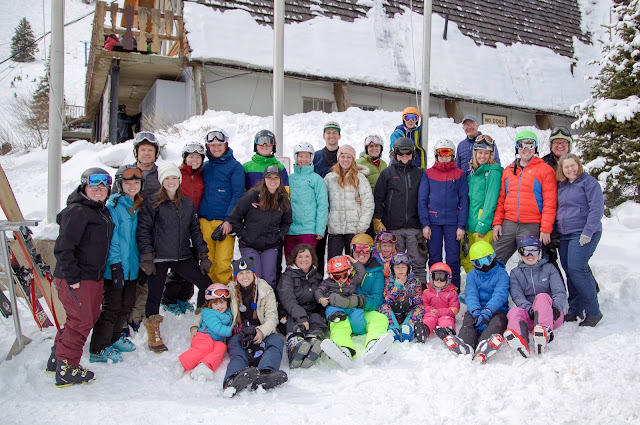 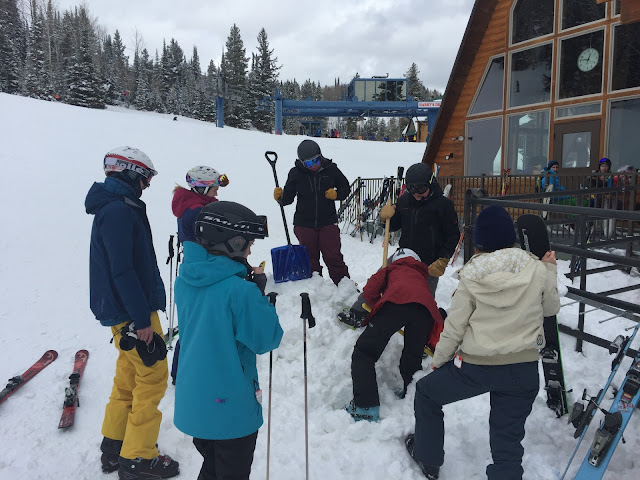 After lunch Camilla Lundberg's skis turned up missing. Come to find out they were buried by a slab of snow that slid off the roof. It took some digging but they were found.

After lunch three new Emmetts were initiated to the joys of skiing at Beaver. 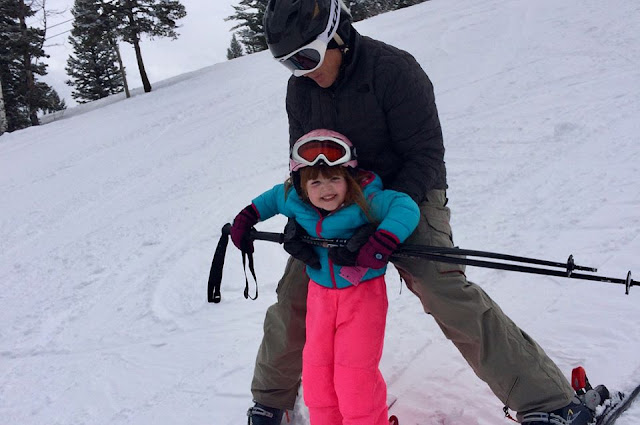 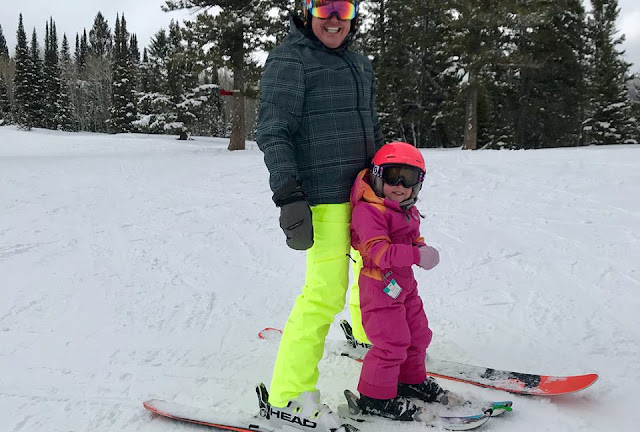 Timothy Emmett, who has spina bifida and uses a wheel chair, having a blast skiing down the mountain in a sled as part of a new program at Beaver the enables handicapped people to ski via Common Ground Outdoor Adventures. His dad John is skiing in the rear. He broke his leg last year and wasn't supposed to be skiing. Here is what grandpa Bob wrote about the day: "The John and Norda Emmett Banana Bread and Cheese Spring Ski Bash was a huge success. More than 30 family members gathered @skithebeav. Three generations spent the day charging the entire mountain. The highlight for me was the #wundertwinds first day on the mountain. With John still recovering from last years tib/fib fracture, Beth and I split duty helping Emmy down Little Beav and Gentle Ben. John tagged along with Aaron and Gustavo from @commongroundoutdooradventures. Timmy did great. Watching him brought a lot of smiles and a few tears." 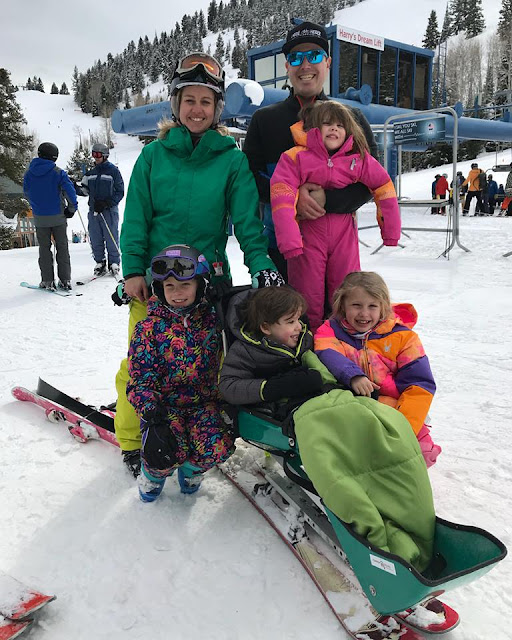 John and Beth and four of their five kids. Photo courtesy of John Emmett

While the twins were learning to ski, their oldest son Jack  joined the boys and me for some sweet rides on Marge's Triple in the terrain park and then in the trees and powder. 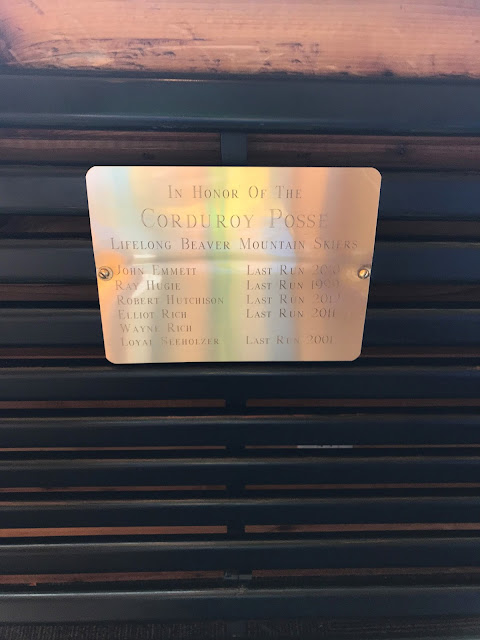 Memorial bench to my dad and his ski buddies.

For another fun day at Beaver see this post from two years ago: http://beitemmett.blogspot.com/2016/02/yeti-nine-beaver-mountain.html
Posted by chad at 9:22 PM