Maxine Grimm may have been the first Latter-day Saint to preach the gospel in the fledgling country of Indonesia, but she was not the only one. There were several expatriate Mormons who lived in Indonesia in the late 1950s and 1960s who also befriended Indonesians, held church meetings, shared their beliefs and established useful government contacts. Most of these early Mormons in Indonesia came as employees of the U.S. government sent as advisors to a young country.
For five years, beginning in 1956, Virginia Farrer Cutler lived in the Kebayoran suburb of Jakarta where she worked as an educational advisor for the State Department’s International Cooperation Administration. Widowed at a very young age she raised two boys while getting a MA at Stanford and a PhD from Cornell. She then became a professor and the Head of the Home Economics Department at the University of Utah. Once her boys were raised she accepted a position with the U.S. government to help establish and strengthen teacher training colleges first in Thailand for two years and then in Indonesia. During her time in Indonesia she helped to increase the number of teacher training colleges from 8 to 12 and she helped send 35 people to the US for special training. One of her proudest accomplishments was soliciting the help of the McCalls dress pattern company in New York City to make standardized dress patterns that were adapted to fit the shape and cultural preferences of Indonesian woman. From these efforts many woman in Indonesia were able to work as seamstresses and thus participate at the local scale in helping the economy grow.[1]
With no other Mormons in Jakarta, Virginia took advantage of any opportunity she might have to fellowship with the saints including Maxine Grimm when she was in port. On one occasion she met some missionaries in route home from Australia and invited them to her apartment as well as fellow Mormon Garth Jones visiting Jakarta from Jogjakarta and they held a small sacrament service.[2] Far removed from regular Church meetings and temples, later in life Virginia set a goal to attend the temple enough times to make up for each week she had lived in temple-less Southeast Asia.[3]
Virginia was not the only expatriate Mormon to live and work in Indonesia during the years before the Church was formerly established.  In 1957 Garth H. Jones, accompanied by his wife Marie and their three sons, began a five year sojourn in Jogjakarta Indonesia as an U.S. foreign service officer assigned to the International Cooperation Administration (later called USAID) with the task of helping in the development of local governments in the newly independent country. Prior to his assignment in Indonesia, Jones has been a young instructor at BYU. There he became good friends with Professor George Hansen of the geology department. Once in Jogjakarta, Garth learned (via his wife) of a USAID project sponsored by UCLA to help establish a geology department at prestigious Gadjah Mada University. He thought George Hansen would be a perfect fit. Professor Hansen, who was near the end of a long and distinguished career at BYU, was indeed interested and so in 1959, George and Afton joined the Jonses as neighbors in Jogjakarta.[4] 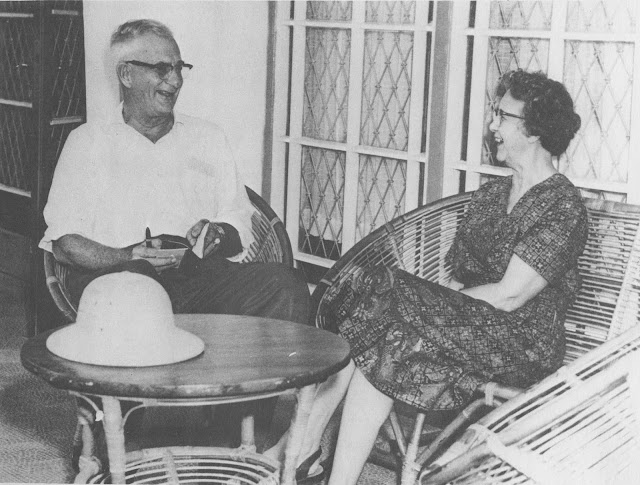 George and Afton Hansen in Jogjakarta
In addition to helping set up the new geology department, Hansen also consulted on various activities including mineral and water exploration. Three months after arriving George supervised the drilling of a water well in an agricultural area 40 miles southwest of Jogja where during the dry season there was not enough water for drinking. He wrote: “It is the most thrilling experience I think I have had with these people since I came to Java and I am hoping that the government will invite me to join them in a search for water in other places. …I repeat it is difficult to believe that in an area that has needed water so badly and has been cultivated so long we actually were in on the drilling of the first water well in the entire region.”[5] Interestingly, over forty years later LDS Charities would help with the installation of water projects in other parts of Central Java.
While the Jones family did on occasion hold a sacrament meeting in their home, they and the Hansens never did so together. When asked why the families did not worship together, Garth Jones explained that while they were all practicing Mormons, they saw themselves as visitors in a Muslim land and out of respect opted to limited outward worship and in part because it was never clear if they needed permission or had the proper authority from the Church to conduct such services.[6]
In George Hansen’s journals he does note that on at least two different occasions he attended English services of the Western Indonesian Protestant Church. On one Sunday he conducted the services and on February 12, 1961 he gave the sermon. In his message about God and science he gave examples of scientific progress throughout history noting how scientific knowledge had changed over time. As he concluded his talk he threw in some distinct Mormon theology and quotes:
“We live in a time of a greater plenty in most things and a time of abundance in many. To me it all represents the handy work of God expressing itself in every modern facet of life. His miracle workers are at work as they were never priviledged (sic) to work yesterday.
“The most faith promoting experiences ought to come in the great experimental sciences where new laws and new techniques can be blended into life saving and life benefiting programs.
“Here we may in part see the unfolding of insights into the purposes and handy works of the master architect. It calls for the exercising of the greatest amounts of faith.  We are just beginning to see and understand some of nature’s secrets. We are beginning to see and feel what must be the infinat (sic) greatness in the world about us.
“Someone has said ‘as man is God once was, and as God is man may become.’ Great men in great performance may be our best modern idea of the power of God in operation among men.
“I know there are those who fear this modern world of science and discovery will move God out of the picture—sober minded, seasoned men of science I am sure do not think so. It brings God in as he could not come in yesterday. God must represent light and intelligence—if so the windows of heaven are just beginning to be flung open, and the mind of men are being prepared for new and more light.
“I believe that the glory of god is intelligence and we are saved only as fast and to the extent that we gain more knowledge and deeper understanding.
“As the universe grows great, we must dream for it a greater God. Amen”[7]
Hansen’s Mormon-laced sermon from a Protestant pulpit won no converts, but his sermons through daily living helped prepare the first Indonesian for conversion to the Church. His name was Sutrisno. One day Sutrisno visited the Jones family hoping that they would allow him to stay with them while he furthered his education. He had heard that they had welcomed another Javanese student into their home so that he could get an education and Sutrisno hoped he could do the same. The Joneses were impressed with Sutrisno’s command of the English language—something not very common in the early years of Indonesia—and recommended that perhaps he could stay with and help the newly arrived Hansens. The Hansens were happy to help Sutrisno further his education and so he moved in and for the next four years he earned his board and room by helping around the household.[8] Some of his duties included translating for the other household helpers, learning to drive so he could be their chauffer, and helping as a typist. He remembers at one point being asked to type a letter to President David O. McKay in which the Hansens asked about the possibility of sending missionaries to Indonesia. Sutrisno remembers that while the Hansens did not talk a lot about their church or offer to teach him about it, they did teach him much through their actions—including their keeping the Sabbath day holy and their abstinence from alcohol and tobacco.[9] 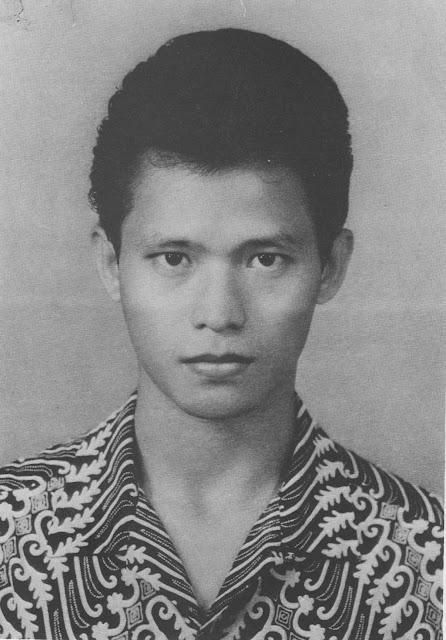 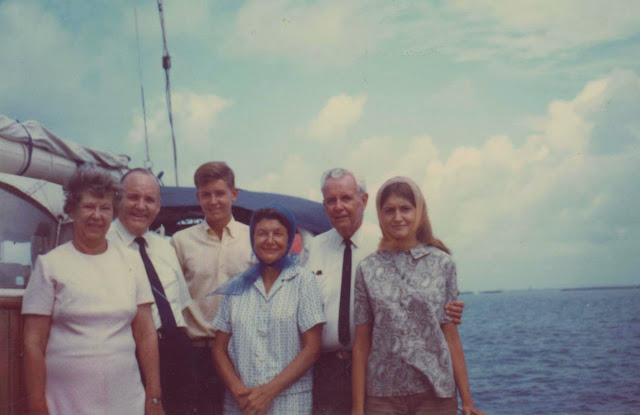