Dedication of Indonesia for Preaching of the Gospel

Puncak (meaning hill, mountain, peak or summit in Indonesian) is a tea growing, mountainous area south of the cities of Jakarta and Bogor that was best known in the past as a cool retreat for Dutch colonialists and is best known today as a fun weekend escape for Jarkartans—complete with a Safari-like zoo and other attractions. For Mormons it is also known as the place where on October 26, 1969, Elder Ezra Taft Benson dedicated the land of Indonesia for the preaching of the gospel.
The participants in the dedication left Jakarta at 6:00 AM for the drive south. As they went to leave, Elder Benson asked Sister Hardy if she would sing a solo prior to his dedicatory prayer. In a letter to her family she described what followed: “I don’t have to tell you how frightened I was. Not only hadn’t I chosen and practiced a song but also it would have to be accapella. During the drive out I thumbed through my little hymnbook like crazy. Finally I turned to ‘As the Dews from Heav’n Distilling and the words seemed perfect for the occasion.” 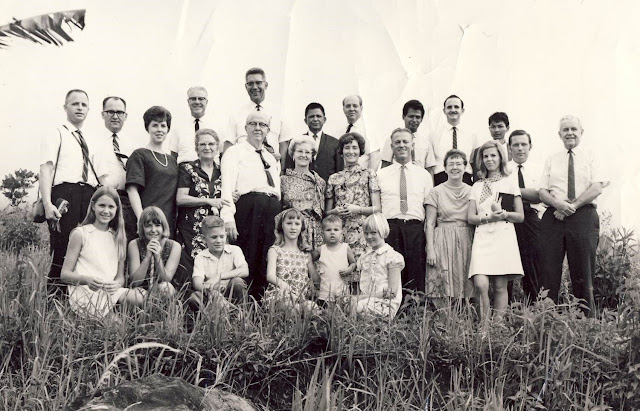 ________Sidebar______
Navy Colonel Ernest Tungka[2] was one of only three Indonesians present at the dedicatory service and the only man wearing a suit coat. At the time he was regularly attending LDS Church services, but was not yet a member of the Mormon Church. Ten months after the dedication he wrote how he came to be a Mormon. The dedication service played an important part of the process. He wrote:
“One Sunday morning my cousin Jan Walandouw, invited me to attend church with him. This was the first time I had attended any kind of a church service for many months. I felt I had lost all faith in my own church. It just didn’t have what I wanted or what I needed. So with a desire to find something new, I went to church with my cousin and his family.”
“The church we attended was named [T]he Church of Jesus Christ of Latter-day Saints. After the first meeting, I truly felt attracted to this new church. A real joy and happiness existed among the small group here in Djakarta. There was something different about these people, something that I wanted.”
“I [became] very interested in the life of Joseph Smith. It amazed me to think that a young boy of 14 years of age had received a visit from God because of his desire to know the truth. I was really impressed when I heard of the trials and tribulations of the Prophet Joseph Smith and that he never denied his testimony, even unto death.”
“Every Sunday as I returned home from church, I had the most wonderful feeling inside. It seemed like the Holy Ghost was telling me that this is something different and wonderful.”
“When I learned about the Word of Wisdom, it was very easy for me to give up my bad habits. My friends were all surprised and they asked me, ‘How can you just suddenly stop drinking and stop smoking?’ I told them it was very easy when you wake up to the fact that these things destroy your health and that God has forbidden us to use them.”
“I was really touched by the Spirit of the Lord when Elder Benson, an Apostle of the Lord, came to Indonesia. It was on that mountain top that I really gained a testimony that the Church was true. I had no doubt in my mind that this was Christ’s church.”
“Week by week, month by month, my testimony grew stronger and stronger. Finally I knew that I couldn’t hold back any longer. I knew that my time had come, so I asked to be baptized. On the 16th of August 1970, I became a member of the church. I bear you my testimony of these things.”  Col. Ernest Tungka[3]
________end side bar

From Puncak they all returned to the Jakarta home of the Butlers for a Sacrament meeting which 39 people attended. How long the meeting lasted is uncertain, but it most likely was longer than normal given the list of speakers: Brothers Butler, Wendel, Harding, Kirton, Grimm, McConkie, Smith, Hardy and Benson (in that order). Prayers were offed by Brothers VanderHoeven and Sutrisno. Sister Hardy provided another impromptu solo of “I Need Thee Every Hour” and Rurie Tungka, the wife of Ernie Tungka, led the congregation in singing a rest hymn of “I Need the Every Hour.”
In his journal entry for that day, President Hardy wrote: “After my first visit in January this year I was not too optimistic about the prospects here, but now look forward to significant success here. However it will most likely come after periods of turmoil. The present government had noble intent. But it is difficult to make changes in the fundamental fabric of society. And who knows what power will do to the men who have just come to power.”
That evening the Salt Lake guests and mission presidents flew on to Singapore to begin setting up mission headquarters there. After a day of looking at property for a mission home and a church, President Hardy informed Sister Hardy that Elder Benson had requested a report of the dedication. President Hardy assumed he wanted it before he flew out the next morning so while Hardy wrote the report, Sister Hardy listened to a tape of the dedicatory service while writing it up in shorthand. Once written down she then stayed up until 5:30 AM getting everything typed and ready for Elder Benson. [4]
Two days later, on Tuesday October 28th, Elder Benson formally created the Southeast Asia Mission out of the Southern Far East Mission at a special branch and mission conference in Singapore.[5]
[1] Brent Hardy Journal of the Southern Far East Mission History 1968-1971.
[2] In a listing of famous people form North Sulawesi, Ernest Tungka is identified as being the founder of Indonesia’s navy and the Assistant Governor of the Navy War College. http://id.wikipedia.org/wiki/Daftar_tokoh_Sulawesi_Utara
[3] Tungka, Ernest. “A Man’s Own Story,” Echo Asia. August 1970, p. 7.
[4] Brent Hardy October 26, 1969 journal entry
[5] Franklin Willard December 13, 1969 journal entry.
Posted by chad at 3:53 PM