The Great Basin town of Tooele, Utah is a long way from Tanjnung Priok, the port of Jakarta, but there is a link between the two that helped to permanently establish the Mormon Church in Indonesia. In 1944 Maxine Tate (born 1914) of Tooele journeyed to the Philippines as a young widowed LDS woman where she worked as a recreational therapist in the hospital service of the American Red Cross eventually overseeing the work in military hospitals from New Guinea to the Philippines and on to Japan. Her duty was to help improve the condition and moral of soldiers in any way possible. While in Leyte she met Colonel E. M. “Pete” Grimm an American sailor from San Francisco who was the grandson of a Methodist minister. That historical and geographical forces combined for these two to ever meet is quite remarkable. Maxine initially thought she would be assigned to help the war effort in Europe (she spoke French). Instead she was assigned to New Guinea, but then ended up serving primarily in the Philippines. Pete (born 1899) had lived in the Philippines for many years prior to the war where he worked in shipping. In 1941, after a visit in the U.S., Pete set out for the Philippines again. He had a plane ticket, but for some reason decided to trade it with another man for a boat ticket. While Pete was at sea the Japanese bombed Pearl Harbor and invaded the Philippines. At that point the man who flew with Pete’s ticket was already in the Philippines and ended up in a Japanese prisoner of war camp for three years. Pete’s ship was diverted to Australia and there General MacArthur knowing of Pete’s extensive shipping experience enlisted his service in the military. After the war, Maxine and Pete were married (1949) and Pete returned to his work running the tug, barge, shipping and salvage company of Luzon Stevedoring along with many other business endeavors.
The newlyweds set up house in Manila and within a few years a son Pete and a daughter Linda joined the family. Pete’s work took him throughout the seas of Southeast Asia, from Hong Kong and Hanoi to Singapore and Jakarta. Much of his travel, often accompanied by Maxine and the children, was aboard their private yacht the Lanikai. Maxine remembers one of their first visits to a newly independent Indonesia. As the Lanikai sailed into Tanjung Priok harbor, she saw Dutch émigrés aboard ships sailing for the Netherlands.
As a devout Mormon, Maxine was always a missionary whether at home in Manila or sailing Southeast Asia. While never formerly called or set apart as a missionary her decades of travel to the many islands of Indonesia gave her a unique opportunity to spread the gospel in a land not yet formerly opened or dedicated for Mormon missionary work. In her own unique ways she was following in the pattern of ground-breaking, door-opening missionaries like the sons of Mosiah, Paul, Samuel Smith and Willford Woodruff. Throughout the 50s and 60s Maxine carried boxes of the Book of Mormon first in English and later also in Dutch (after she realized that many Indonesians could read Dutch) as well as other church pamphlets on the Lanikai to hand out to whomever she might meet. Many of her efforts were directed at a captive audience—the channel pilots who would come on board to help the Lanikai navigate through the remnant of WWII water mines in Indonesia’s channels and harbors. During their time at the wheel, Maxine said she would “indoctrinate” the Indonesian pilots with teachings about the church followed by a gift of a Book of Mormon. Other students of Maxine included the many government and business leaders she met along the way. Some of these proselytes even wrote back stating something along the lines of “I read your book, I now be baptized”--although few ever were. [1] 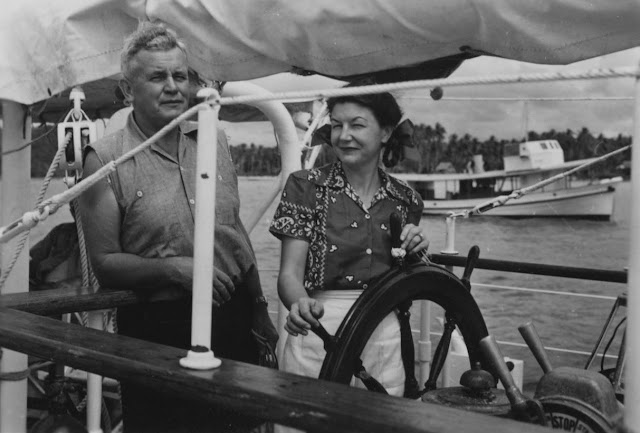