Gaining recognition for the Church 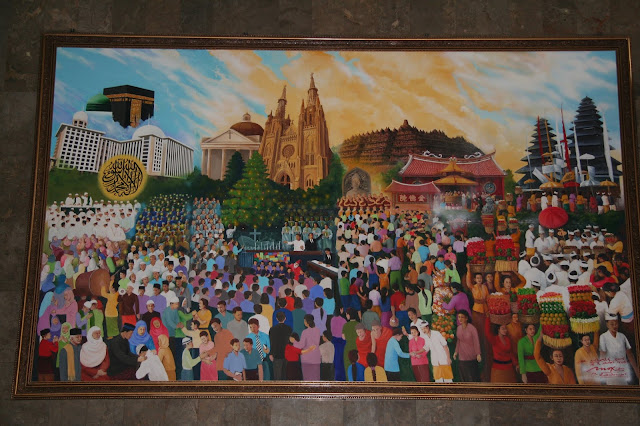 Mural in the entry of the Ministry of Religion depicting the five official religions of Indonesia (2007).
During the Jakarta visit, Wilford Kriton from the Church Legal Department was able to meet with an officer in the U.S. consulate office who was able to offer help. Then he and Carlos Smith spent one whole Saturday waiting unsuccessfully in the hotel lobby to meet with a Jakarta attorney (Walandouw’s contact) to discuss setting up the Church as a legal entity.[7] Kriton then turned to plan B and contacted another attorney who indicated that their needs could be met. In describing these visits, Hardy noted that “the government administration is inefficient and frustrating to deal with. However consideration must be given to the fact that the government is just beginning to function again.” 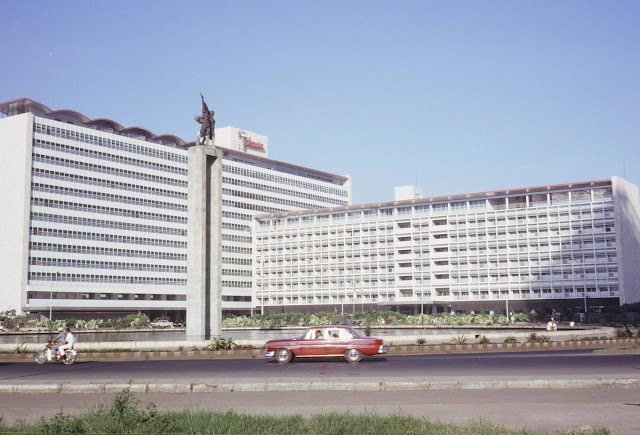 Hotel Indonesia in the 1960s. Source: https://www.thejakartapost.com/travel/2018/08/08/five-things-to-know-about-the-historical-hotel-indonesia.html
After the visits the apostles returned to the hotel where they, along with the two mission presidents and their wives, several of the expatriate LDS couples, Pete Grimm and Jan Walandouw, met in an “upper room” of the hotel to discuss whether or not Indonesia should be dedicated for the beginning of missionary work. Elder McConkie gave “a beautiful prayer and told the Lord that we felt, after consideration, that it was the thing to do and asked Him to make it known to us by a calm, peaceful feeling if this decision was right.” As they sat in a circle, Brother Benson asked most of the men present “to express their feelings regarding the people, the government, government leaders, potential, and advisability of sending the missionaries to Indonesia.” They also offered their feelings about whether or not the land should be dedicated.  All spoke affirmatively. President Hardy told of his two previous visits to Indonesia and summarized the reports he had submitted. Then as the final voice, Elder Benson explained: “I have been praying to the Lord that if it were not proper for the land of Indonesia to be dedicated to the preaching of the gospel. That he would hedge up the way and prevent it from being done.” By this point it must have seemed as if the answer was obvious, the Bensons had been allowed last minute entry without the required visa (something McConkie joked about later as not being a preventative hedge), government officials and diplomats had offered support, the minister of religion had offered recognition, and everyone in the circle had expressed their support for moving forward (including Pete Grimm with his decades of experience trading in Indonesia and Jan Walandouw with his many political connections). [8]
The next step was to find a place that Saturday afternoon for a Sunday morning dedication. Several local members had spent the morning looking in Jakarta for an appropriate place but with no luck. That afternoon, at the recommendations of Pete Grimm and Dennis Butler, President and Sister Hardy drove with Jakarta resident Sister Cornelius (whose sister lived near the Hardy’s in Salt Lake City) two hours south of Jakarta to the Puncak area “where they found a beautiful secluded hill that overlooked the countryside.” The selected knoll was a three mile drive and a 300 yard walk up into the hills above the Canadian Embassy bungalow—where Sutrisno had been baptized a few months earlier. On the way back from the finding expedition Sister Hardy remembers how they stopped at a road side fruit stand and bought some mangos and mangosteens to eat along the way. She also noted in a letter home how it rained and rained to the point that in certain places the water was up to the door of the car.
Later that evening the Wendel’s hosted a large dinner party for the visiting and local Mormons as well as Indonesian friends and contacts. Jan Walandouw furnished the food. Sister Hardy, on her first visit to Indonesia, likened the delicious food to Chinese food only “a little bit spicier and hotter.” A “little bit” may be an understatement for Carlos Smith and Amelia Benson who unknowingly “got hold of a little piece of green pepper that about took their heads off.” Elaine Hardy noted that Smith “was bright red and sputtering, the tears just rolling down his face’ and that everyone “got a good laugh out of it at his expense.”

SIDE BAR
Sister Hardy’s description of being red faced and sputtering is conveniently expressed by a single Indonesian word: kepedasan. The root pedas is an adjective that means spicy hot, add the ke and an affixes and you get a noun that means “the state of being overcome by something spicy hot.” President Smith and Sister McConkie were not the first nor were they the last foreign Mormons to experience kepedasan in Indonesia. It is something that most every first time visitor to the country experiences.
At my first dinner invitation/birthday party as a very green missionary in Semarang in November 1975, I excitedly loaded up my plate from the large table top spread of rice, curries, stir fries and condiments (called a rijsttafel—rice table by the Dutch). Included in my selection were two tiny green peppers (cabe) that a naïve me (from an America yet to be invaded with Mexican cuisine and its hot green chilies) thought would taste like the large sweet green bell peppers of my youth and not the hot red peppers associated with Tabasco Sauce (the only hot sauce or salsa I had been exposed to at the time). I was wrong. Like Carlos Smith, I popped one of the peppers into my mouth and started to chew.  Soon my mouth was on fire, my lips were burning, my eyes were watering and my face was turning red. Water (always served room temperature or hotter and never with ice) was the only antidote I could think of. It didn’t help. A young girl at the party noticed my face and while pointing (with her thumb, not her pointer finger) exclaimed “dia kepedasan!” (he is burning up from the chilies!). Everyone looked and laughed. The host and my companion Elder Gary Stephens came to my relief with encouragement to eat some plain white rice to help absorb the burn of the cabe’s capsaicin. Most Indonesian meals end with a serving a fruit which is also a nice antidote for all the heat of the rijsttafel dishes for it literally “washes the mouth” (cuci mulut ).
[1] Brent Hardy Journal of the Southern Far East Mission History 1968-1971 and McConkie, Joseph Fielding. The Bruce R. McConkie Story. Salt lake City: Deseret Book, 2003,  p. 339
[2] Brent Hardy Journal of the Southern Far East Mission History 1968-1971.
[3] Brent Hardy Journal of the Southern Far East Mission History 1968-1971.
[4] Brent Hardy Journal of the Southern Far East Mission History 1968-1971
[5] Dennis and Vernene Butler interview, March 10, 2011. While not certain, Maxine Grimm (October 20, 2001 interview) suggests that it is very likely that the Minister of Religion had already been approached by Jan Walandouw about granting approval for the LDS Church, which may explain why the Minister could fill in the name of Benson so easily.
[6] Dennis and Vernene Butler interview, March 10, 2011. It is not exactly certain which of all the many government contacts and connections should be credited with getting the LDS Church recognized. It could very well be that different contacts helped at differ levels and with different government entities. One other possible influence in the process came from LDS businessman Hall Jensen (25 June 2003 Interview) who first began working in Indonesia in 1968. One of his first projects was helping to arrange for the Indonesian government to repay US loans with petroleum. This brought him into contact with Sigit, the son of President Suharto. Jensen recalls that his contact with Sigit helped establish contacts between the Church and the Department of Religion which helped in gaining permission for the entry of the first elders in 1970.