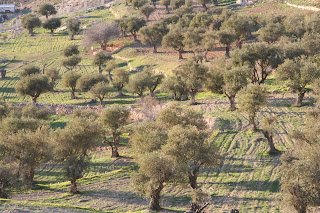 January is supposed to be the coldest, rainiest month in the Holy Land. Not so this year (today was sunny and in the 70s). Perhaps it is a sure sign of global warming or maybe a reminder to keep the commandments (Deuteronomy 11:12-13). Or it could just be bad luck for me in that I have always wanted to ski Mt Hermon which will probably not even open this year. Israel is in its third or fourth year of drought so it is certainly OK to not only pray for snow at Beaver Mountain but also for snow at Mt Hermon (a snow day in Jerusalem would be nice too).

Friday is an early out day for the kids so after their school and my morning of teaching two hours of Old Testament we headed out to enjoy the January sun and warmth. Just north of the BYU Center dividing it from Hebrew University is the Tzurim Valley. It is a recently created national park intended to preserve the traditional landscape of the Mount of Olives (it also prevents Arab neighborhoods from expanding). The upper entrance to the park is thirty yards up the street from the upper entrance to the center. We started there and hiked down through the valley enjoying the olives, the newly sprouted green grass and the sheep--very pastoral. 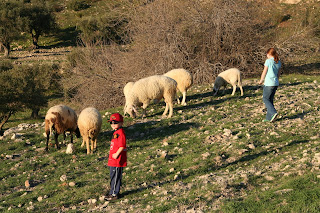 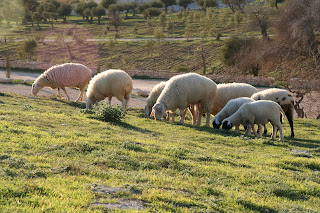 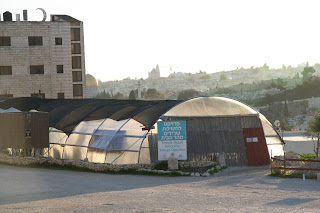 At the lower entrance to the park we passed an interesting archeological site. A few years ago, Muslims turned the underground pigeon pooped filled caverns in the southeast corner of the Haram al-Sharif (aka Temple Mount) into a mosque. In order to transform what was once known as Solomon's Stables into a mosque, Muslims builders excavated out a lot of materials and then dumped them off the mount down into the Kidron Valley. This was done to the horror of biblical archeologists who would have loved to systematically dig down through the layers in hopes of better understanding the history of the temple mount. It was also done to the horror of temple focused Israelis who were hoping that such a dig would reveal artifacts and evidence of former temples. Once the Muslims had discarded the rubble over the edge, the Israelis gathered it up and moved it to the above tent in the Tzurim valley where archeologists and volunteers sift through the rubble for temple treasures (no Ark of the Covenant yet). We walked past the tent out to the main road and then 40 yards up the hill to the lower entrance of the center. A great walk. 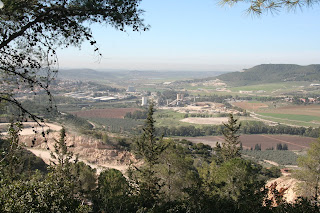 Today (January 10th--Happy Birthday brother Bill) we headed southwest to the Shephelah--the low lying hills and valleys between the the Judean highlands and the coastal plain. Our destination was the Sorek Stalactite cave. This cave was discovered about twenty years ago when blasts from a limestone quarry opened up access to a wonderful cavern with a rich variety of stalactites, stalagmites and columns. This photo was taken near the entrance to the cave and is looking down on the limestone quarry, the town of Beit Shemesh and beyond that the Sorek Valley of Samson and Delilah fame. Samson comes from the town of Zorah which is located a third of the way up the forested hill on the right/north side of the valley. The biblical tel of Beit Shemesh is across the valley to the south of Zorah and beyond the modern day town that bears its name. 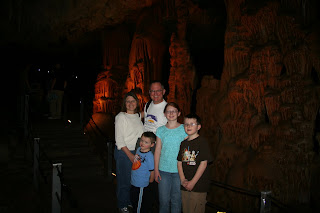 Soon after we pulled up to the caves another LDS family (the Lewis family) from our branch pulled up too. It was a nice coincidence. He is our home teacher, she is Sarah's activity day leader and their five kids are close in age to our kids--which made the visit much more enjoyable for all. 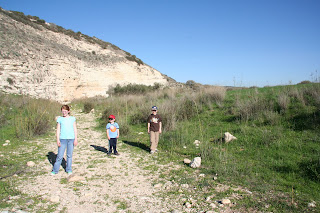 After a picnic in the USA Park we drove south to the Valley of Elah where we walked along the brook (no water flowing in this year) where David gathered his five smooth stones. The Israelites were encamped on the north side of the valley (seen here) with the Philistines on the south side. 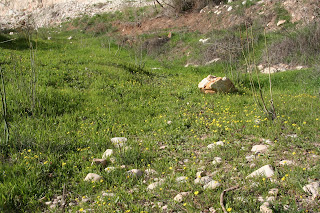 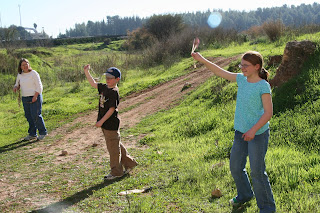 We all tried our hands at slinging. We certainly need some more practice. Sarah said David is her new hero since he figured out how to use a sling successfully. 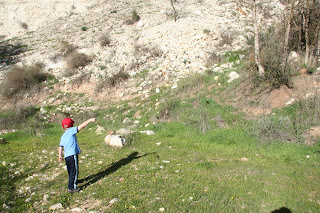 We then drove a forested back road up to Jerusalem. We all enjoyed the openness and uncrowdedness of the Shephelah. We were surprised that there was so much open space and so few towns. There is certainly room for future Israeli growth here.
Posted by chad at 10:50 AM