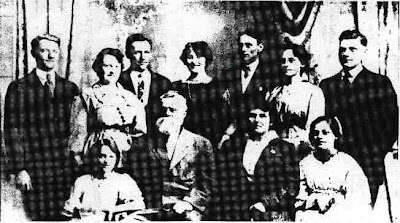 Charles Heber Dudley Sr. was born in Council Bluffs, Iowa to Hunt Dudley and Mary Ann Robinson on 17 August 1848, while his family waited to move west with the saints. His wife was Dorothy Ann Wallace, the daughter of George Benjamin Wallace and Hannah Davis. She was 17 years old and Charles was 32 years old when they were married. This occurring only after Dorothy was counseled by her father to do so. They were married in the . Charles was 52 years old when he came to .

In 1889 Charles Heber Dudley of Willard Utah entered into a contract with the Alberta Irrigation Company to build a mile of canal in . This point of land today, is on the South bank of the coulee where highway 62 rises out of the pothole coulee. The mile was to be the second mile of canal, east of the Magrath dam around Gumbo Point. With men, equipment, and sixteen head of horses, he traveled to by rail. Arriving at the canal he built a 18' x 24' dug-in to live and also to store his equipment. He worked from to February of 1900, when he completed his contract. For his work he received half cash and half script with which he purchased 200 acres of land. This land, called the hayland, is one and one-half miles south-west of Magrath and is where Wallace Dudley, his son, later farmed.

While in , Charles received a call from the Mormon Church to bring his family from and settle in Magrath. Storing his equipment in the dug-in he returned to for his family. Upon reaching Willard in February of 1900, he sold his farm on the , his home, which they had just finished paying for, and all other holdings, except for his share in the , in preparation for the move. During the preparations to move, his wife Dorothy Ann Wallace refused to leave Willard and go to . She appealed to her father George Benjamin Wallace who was at the time the Stake President of the stake. George Benjamin drove to Willard in his buggy to give encouragement to Dorothy Ann. He told her that this move was a mission call from the lord and promised her that it would be an experience she would never regret. With this Dorothy Ann went to with a strong spirit and zeal that blessed and encouraged the lives of many.

Leaving , , they traveled with their family to by train. The family rode in the caboose from , to and arrived April 9th at . They immediately began unloading their cattle, horses, pigs, chickens, , and machinery. Charles and his family left at on April 11 in a large white topped democrat, said to be the first in Magrath. The weather was beautiful and they stopped at the pothole crossing south-west of the airport for dinner. The grass was as tall as a horses belly and the wind created waves like the sea, causing Dorothy to become seasick as she watched it. The hill was so steep down into the Magrath pothole at the dug-way (rudimentary road} that aunt "Ag' Wallace wouldn't ride the buggy down. They arrived at the dug-in at that evening.

Two of the children, Dora and Harriet, years later, told of the fun that they had running up the hill onto the roof of the dug-in and down again until "father" put an end to it. The next day the children had great fun building a raft out of slabs and sailing on the pond in front of their new home.

It didn't take Dorothy long to set up respectable housekeeping. She divided the dug-in into four rooms by slab partitions, hung building paper on the slabs and layered cloth on that. A coat of kalsomine was then added. On the floor was a thin layer of straw with rag rugs from wall to wall. Two bedrooms were added later. Dorothy was creative in making everything in her domain beautiful. She was an expert seamstress and would often find the most exquisite dress in the exclusive shops and then would go home and make it. She was also a wonderful cook. Breads, cakes, cookies, pies, fondants, chocolates, , scotch bread and more, often graced her home. She always had a large garden and when C.H. butchered a steer, she would can it.

In July, 1902 it rained and rained, causing flooding in the valley. The water rose so fast that the family had to crawl out the north window of the dug-in to higher ground. The organ was lifted onto a table to save it. They moved into the grainery for three days until they could reach safe ground when the water receded. They had no clean water and almost died of thirst, until Sammy Wallace swam a horse over to bring some water. The floor of their home was covered with a silty mud. Dorothy and her girls made it cozy and livable again in short order.

After the flood, a new six room home was built by Critchfield twenty feet west of the present Alan Dudley home. This was a two story frame home which had a bedroom, pantry, and two large rooms on the lower level.

The kitchen was in the south end of the home while the living room was in the north. The entrance way was off the kitchen on the southeast side. There were internal stairs on the east wall rising to the south. The bedrooms were upstairs. The Wallace's (Dorothy's family) had a nursery in Salt Lake, so she was particular with the grounds and was concerned when the grass would never grow on a patch of ground on the north side of the house. This remained a mystery until Charles finally realized that the north room was the boys bedroom.

During the winter months, Dorothy and her children had great fun sliding on scoop shovelsdown the hill on the east side of the house out on to the frozen pond. As there was no refrigeration, ice was used from the pond, later known as Ovard's pond. It was cut and hauled up the hill and stored in an underground cellar (ice house), which was about 60 feet east of the house. Packed in ashes, the ice remained frozen and was sold in the summer. Alan has found many artifacts from this and other structures from that era while digging water lines etc. About 100 feet southeast of the house was the chicken coop. It was on a small rise of ground with the stable beyond that. The garden was south of the barn. The spring was toward the creek (pond) about 150 feet southeast of the house and is still there and running.

It has been a labor of love for Alan Dudley to be able to purchase the land and have it once again to be the homestead.

Dororthy Ann was a practical nurse and began her midwife career during the flood of 1902 out of necessity. She later went on to deliver 200 - 300 babies in the Magrath -Raymond district. Her charge was $1.50, and this included delivering the baby and 10 days of care for the mother and child. One experience she had was in the dead of winter during a terrible blizzard when a man came to her to deliver a baby in the country, When they got there, snow was drifting into the cabin onto the woman's bed. Dorothy Ann delivered the baby but the after- birth would not come, Knowing the woman was hemorrhaging, Dorothy went into a closet and prayed, asking what to do. A voice gave her instructions, which she followed exactly, and was able to save the woman's life. Because of her great faith, she could tell many faith promoting experiences.

Charles Heber was an ambitious, frugal, and a very religious man. Every morning the family would read from the scriptures and then would turn their chairs with the backs to the table and have a kneeling family prayer. He was the first ward clerk and also the town secretary in Magrath. He always had peppermints in his pockets to give to the kids. One funny story told of Charles Heber was when he got his first car. The boys drove it out from and when he got in to drive, they didn't tell him how to stop it. When he wanted to stop, he pulled back on the steering wheel and yelled "whoa, whoa". They boys were running along side of the car having so much fun that they wouldn't tell him how to stop it. Finally one of the boys jumped in and stopped it for him.

A favorite story tells of the Rasmus Rasmussen family and their neighborly buck sheep. One morning, while the were at church, he decided to make a visit. Dorothy had brought with her from a folding bed with a large mirror on the front of it. This being a very valuable luxury in a frontier town. The sheep saw himself in the mirror and rushed in to attack. There was not even a small piece of glass left intact when Dorothy returned home from church.

This write up was taken from Alison Shaw’s website: http://members.shaw.ca/familytreasures/ch_dudley_sr_.htm