Thoughts while riding my bike

This morning on my bicycle ride (I sure am enjoying my new Globe Daily 3 bike) to work (it has been a few weeks since my last ride due to a bad cold and the need to hurry and drive to many after school events such as scout meetings, soccer games and cross country meets) I got  to thinking about the up coming ski season (a cool crisp fall morning naturally instills such thoughts). This is the year that 5th grader Joel gets a Ski Utah Passport that allows him to ski for free two times at each ski resort in Utah. Instead of getting discount tickets at Solitude like we have in past years, I am thinking we will follow Joel to as many ski resorts as we can afford and find time for this winter.

This all came to me while peddling up Ironton Hill on U. S. 89 and thinking that I was not in that great of shape. I then thought about dad (he passed away one year ago today) who for most of his 83 years would also think seriously this time of year about starting his pre-ski conditioning. More often than not that conditioning ended up resorting to the last resort which was getting into to shape for skiing by skiing. Dad's efforts to get in shape to ski were often a bit more challenging given that fact that most every body part and appendage of his at one point or another was the cause of a visit to the emergency room or doctor's office. It all started as a young boy when he pushed a bean in his right ear which lead to the life long bother of being deaf in one ear. It then proceeded to such ailments as near sightedness (I like him am prone to looking over the top of my glasses to read the fine print, even with the help of bifocals), whacked off finger tips, knee and back operations, heart by-pass surgery, prostate surgery, and finally melanoma that spread from his neck to his abdomen and finally to his brain. Through all of these health challenges dad never gave up. He was always ready to drive or fly to the baptism or wedding of a grandchild, he served faithfully in whatever church calling he was given, he was still involved with various civic duties up to his final weeks on earth and if there was snow in the mountains he would get up fours times each week and go skiing with his friends and family. 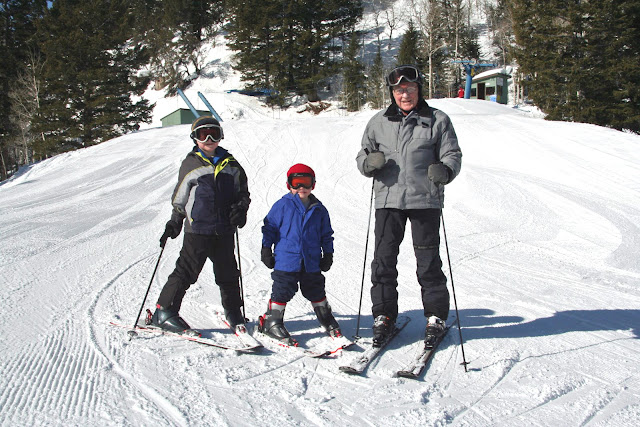 Dad skiing with Joel and Will (his first day skiing at Beaver Mt.) in 2007.

I then thought about how I need to be more like dad. How I need to just keep trying, no matter what challenges life brings.  I need to keep trying to be a better husband and father, to do better in my church callings, to find more ways to serve others, and to patiently endure health challenges.

When I first started teaching at BYU, the Daily Universe would  highlight the favorite scripture of a student each day in the paper. Over the years I noticed that one scriptures stood out as the favorite. It is found in the Book of Mormon, 2nd Nephi chapter 31 verse 20: "Wherefore, ye must press forward with a steadfastness in Christ, having a perfect brightness of hope, and a love of God and of all men. Wherefore, if ye shall press forward, feasting upon the word of Christ, and endure to the end, behold, thus saith the Father: Ye shall have eternal life." I too like this scripture.

Riding a bike is a good reminder to me of enduring to the end. When I was four or five and we were living at 152 West Center in Providence Utah, Dad tried to teach me to ride a bike. I had inherited a red Huffy hand-me-down from Bill and Bob. It had already seen a few mishaps as evidenced by its flattened fenders and the misshaped basket. Dad would take me up to the corner and get me settled on the bike and then run with me as I began to peddle down the gentle slope of the side walk. He would then tell me he was letting go and that I was to keep peddling and steering. For whatever reason I was severely bicycle challenged and every time he let go, I would wobble and weave and then crash onto the lawn. I would try again or run into the house crying depending upon my mood. Dad and I never gave up. We tried my kindergarten year and my first grade year, but with no success and many more falls. Then after a summer move to Logan and the beginning of my second grade year when I had just turned seven, I finally got it. I climbed on my bike and started to ride!

A few days later mom asked Bill and Bob to ride down to Safeway to buy some groceries. I begged to tag along. Mom consented and off I went peddling hard on the Huffy to keep up. As we headed west on 500 north I noticed two brothers fighting in their front yard. The older brother then picked up his younger brother and started carrying him toward the ditch of flowing water. Would he throw him in? I kept watching to see the outcome. Unfortunately I did not keep watch in front of me and I crashed into the back of a parked car. My mouth hit the handle bar and my front tooth chipped. It was a humiliating ride back home, with the peace of chipped tooth safely stored in my cheek so that perhaps it could be glued back on. Not.

Bikes were a boy's best mode of transportation and so I kept riding. I soon graduated to a green three speed Schwinn. I rode my bike to after school Primary, to Little League base ball games down by the High School, and to the fields north of town to watch Frank and Paul Stewart shoot field mice with their pellet guns (no guns in the Emmett home). Some days my friends and I were even able to ride all five blocks to the Jr. High without putting our hands on the handle bars.

When Bill left for his mission in Kentucky and Tennessee, I inherited his blue 10 speed bike. It was that bike that I would ride to early morning drivers ed. during my sophomore year. On a sunny March morning I headed to school along Fourth East past the temple and down the Boulevard. As I approached the intersection of Main and Center streets I moved into the crosswalk on the south side of the intersection. As I rode westward through the intersection on a green light a man driving eastward on a green light started to turn south just as I entered the south bound lanes. Apparently the rising  sun was in his eyes and he did not see me. I saw him and remember squeezing my brakes hoping to avoid a collision. It didn't work The front of his turning car hit me broadside breaking the fibia and tibia on my right leg (a compound fracture) and then catapulting me up and over the car. While flying I remember thinking that I was going to land and get road rash on my hands and elbows and that I would be late for drivers ed. I got more than that. I came down head first and put out my left hand to break the fall. It broke my fall, and broke my wrist. Passing cars stopped to help, an ambulance was called, and school buses passed by with fellow students craning their necks to see who was lying in the intersection. With a cast on both my leg and arm I was unable to use crutches and so I spent the next few months doing school work at home. Eventually the arm cast came off and the full leg cast was replaced by a walking cast. I was then able to go back to school and when summer came I was even able to begin riding my bike, walking cast and all. I wouldn't turn 16 until September and so without a driver's license I had to get back on and ride. 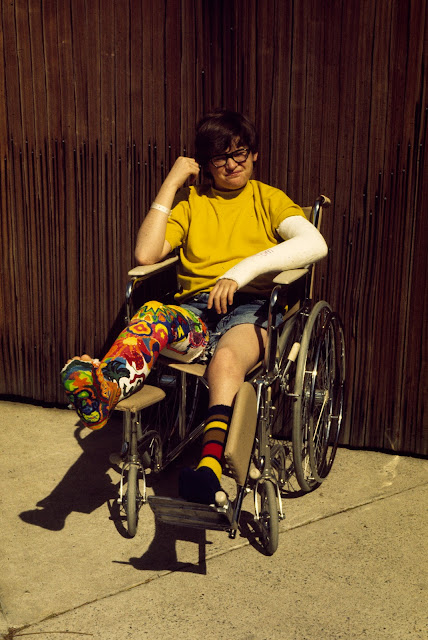 The aftermath of my 1972 bicycle crash. 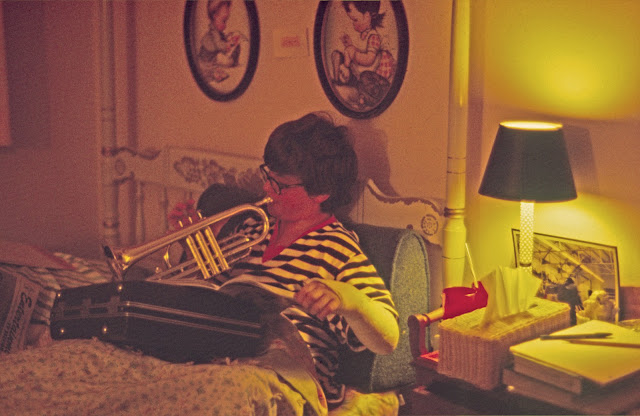 The next three years, included riding my bike up steep 6th North to USU, were without mishap. It was a good thing I kept riding, it kept me in shape for two years of daily bike riding in the congested streets of Indonesia. There I had plenty of opportunities to get back on and ride. When I tipped over in the flooded waters of Semarang, I got back on a rode (read that story at: http://www.mission.net/indonesia/jakarta/stories.php?sID=854). When my black Phoenix bike got stolen,  I climbed on the back of my companion's bike and rode along. While doing so my foot slipped off the wheel hub (where I had positioned my feet in hopes of sparing my achy sit down by absorbing the bouncy blows of the rough road) and into the spokes where my right shoe flapped like cards clipped with clothes pins to the spokes of kids bikes in the 24th of July pioneer parades. When a pot hole masquerading as a puddle gobbled up my front tire and sent me flying forward landing on all fours, I got back on and rode. I rode through the heat and humidity of the tropics, through the rains of the monsoons, and through the belching exhaust of bemos, bajais, cars, vans, buses and trucks.

Through all the years I have kept riding. I have ridden Moab's slick rock trail and porcupine loop with my brothers and as a bishop with the Young Men in our ward. I have navigated the streets and lake front of Chicago while attend the University of Chicago and then riding to and from my first teaching job at DePaul University. I have lobbied UDOT and Springville and Provo cities for wider shoulders on U.S. 89 for my 6 mile, 30 minute commute to BYU. Bike rides with the kids are my current favorite. I may never ride in LOTOJA with my brothers, but I will continue to keep on riding. Dad never gave up and neither will I.