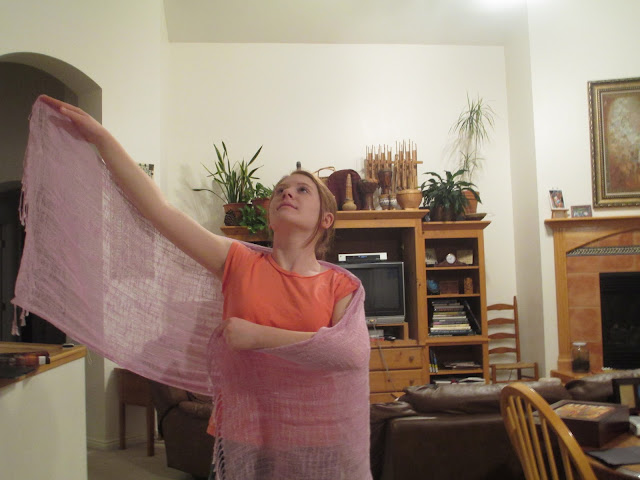 A photo shoot by fashion consultant Will in which he tried to help Sarah with attractive scarf arrangements. (This was not Sarah's choice of a photo--she would have liked to remain anonymous).

Last summer during a visit to the doctor during a mean bout of pneumonia, a routine check of Sarah's blood pressure came back unusually high. It was dismissed as perhaps related to the pneumonia. Then in January, during a check up for the flu, her blood pressure was again abnormally high. The on-call physician recommended that we get her blood pressure checked so Marie made an appointment with our pediatrician Dr. Adams. He was booked for months, but once Marie explained the blood pressure concern we were bumped up.

At that February 25th appointment a surprised nurse took Sarah's blood pressure three times just to make sure she got it right, a second nurse then tested it and then finally Dr. Adams checked it multiple times. Each time came back high (around 155/110). Sarah runs regularly, eats well, is not over weight and does not consume lots of salt, so Dr. Adams suspected that something else was amiss. He referred us to Dr. Meredith Seamon at Primary Children's Hospital in Salt Lake City. She is a pediatric nephrologist (having to do with kidneys).

Prior to meeting with Dr. Seamon, Sarah had blood and urine tests and a renal ultrasound (which showed one of her kidneys a bit smaller than the other). After meeting with us for an hour, Dr. Seamon prescribed medication to bring Sarah's blood pressure down, the initial two medications (for normal blood pressure problems) did not work. Sarah then had to wear a blood pressure cuff for 24 hours which took readings every 20 minutes--beeping during both sleep and sacrament meeting. That information confirmed that the medications were not working and so Dr. Seamon dropped one medication and added another which after a few adjustments of dosages and timing have been doing the job. Dr. Seamon then scheduled a MIGB scan where radioactive matter was injected into her body and then tracked to see if it would attach itself to a possible tumor. That scan came back normal--no visible tumors. Next step was a 24 hour urine test. That test confirmed earlier blood and urine tests which showed that Sarah's body was secreting a hormone (norepinephrine) to try and rid itself of the mass and that hormone was adversely effecting her blood pressure. Next step was to schedule an MRI.

That happened yesterday. While lying still for nearly 90 minutes, Sarah got to watch Harry Potter 3 via special video goggles. This afternoon Dr. Seamon called with the results of the MRI. It showed two "highly suspicious nodular masses" each about 2 cm in length near her left kidney and her spine. The masses are referred to as paraganglioma. If they were attached to her adrenal glands then her illness would be called pheochromocytoma (what was originally thought to be the problem). Both illnesses refer to similar masses/tumors. The next step is to meet with a pediatric surgeon and then have the masses removed. Once removed it is assumed that Sarah's blood pressure will return to normal. Throughout the ordeal, Sarah has had no other symptoms or pain. The one concern is that according to Wikipedia (read more here), there is a 3% chance of the mass being cancerous. For now we will keep Sarah at the top of the prayer roll hoping for a successful surgery and no malignancy.
Posted by chad at 6:11 PM