A little bit of luck 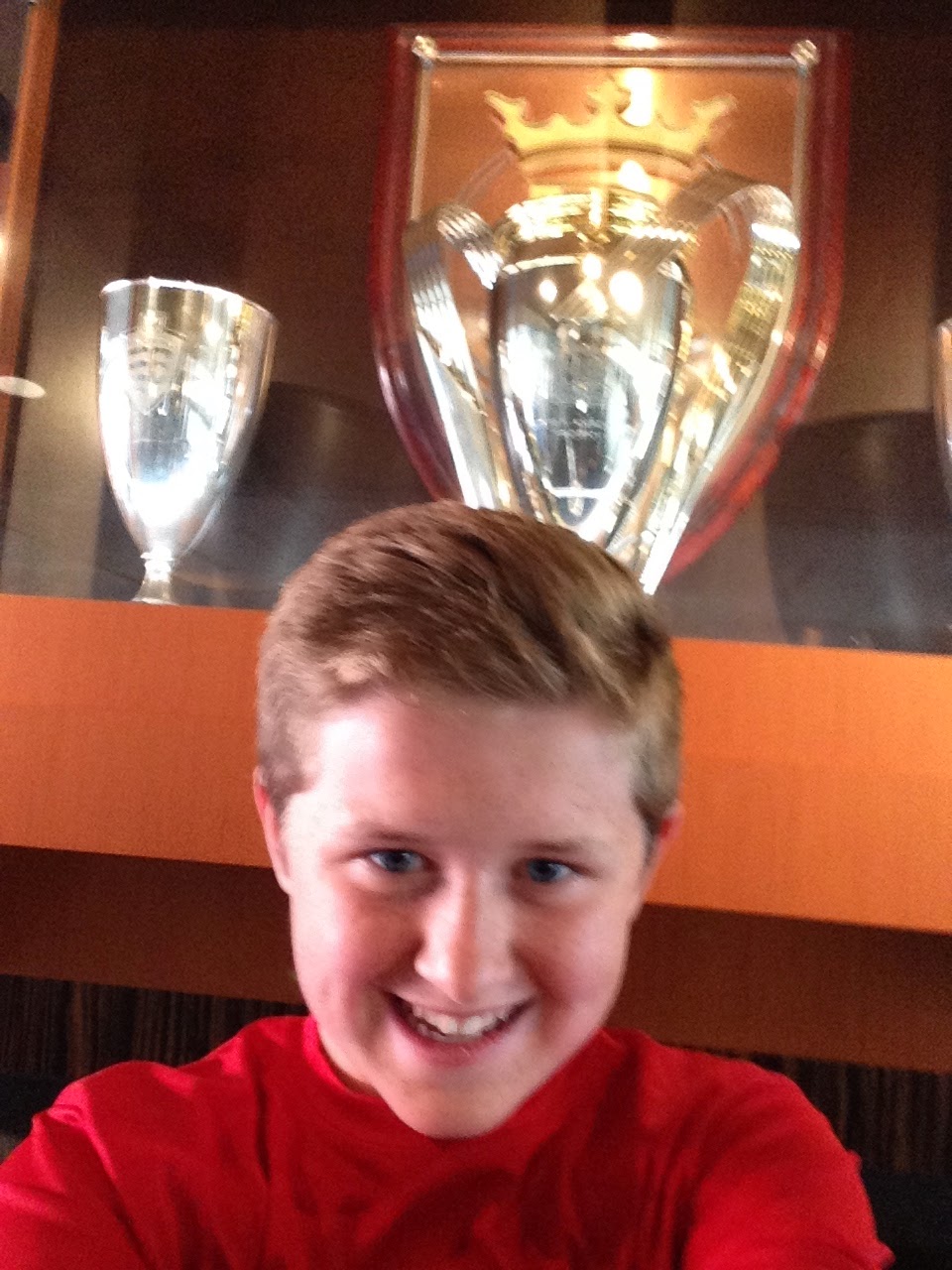 One morning a few weeks ago, Marie took our van in to our local tire shop (Johnson's Tires) to get the brakes checked. While waiting she signed up Joel and Will for a drawing sponsored by the Tire Pros (local tires companies in Utah) for boys and girls to win an evening at the Real Salt Lake stadium--where they would get to tour Rio Tinto Stadium and get to go out on the field. She thought our two boys would love it. To her surprise (we never win anything) she got a call last week from Riley Johnson (whose son Clayton is Joel's good friend) saying that Joel had won and that he and a parent (and no one else) were to go to Rio Tinto Stadium on Wednesday night at 5:00. Joel was excited. So was Marie who watches all of the games with the boys. She was especially excited to perhaps meet player Joao Plata (who does a little Latin salsa dance after he scores--Marie has similar Latin moves). My job in all of this was to come home early to pick up Sarah from musical (The Mikado) practice, take her to piano lessons, take Will to soccer training, go visit mom in Mapleton, pick up Will, then pick up Sarah and go watch Will compete in the Pinewood Derby. 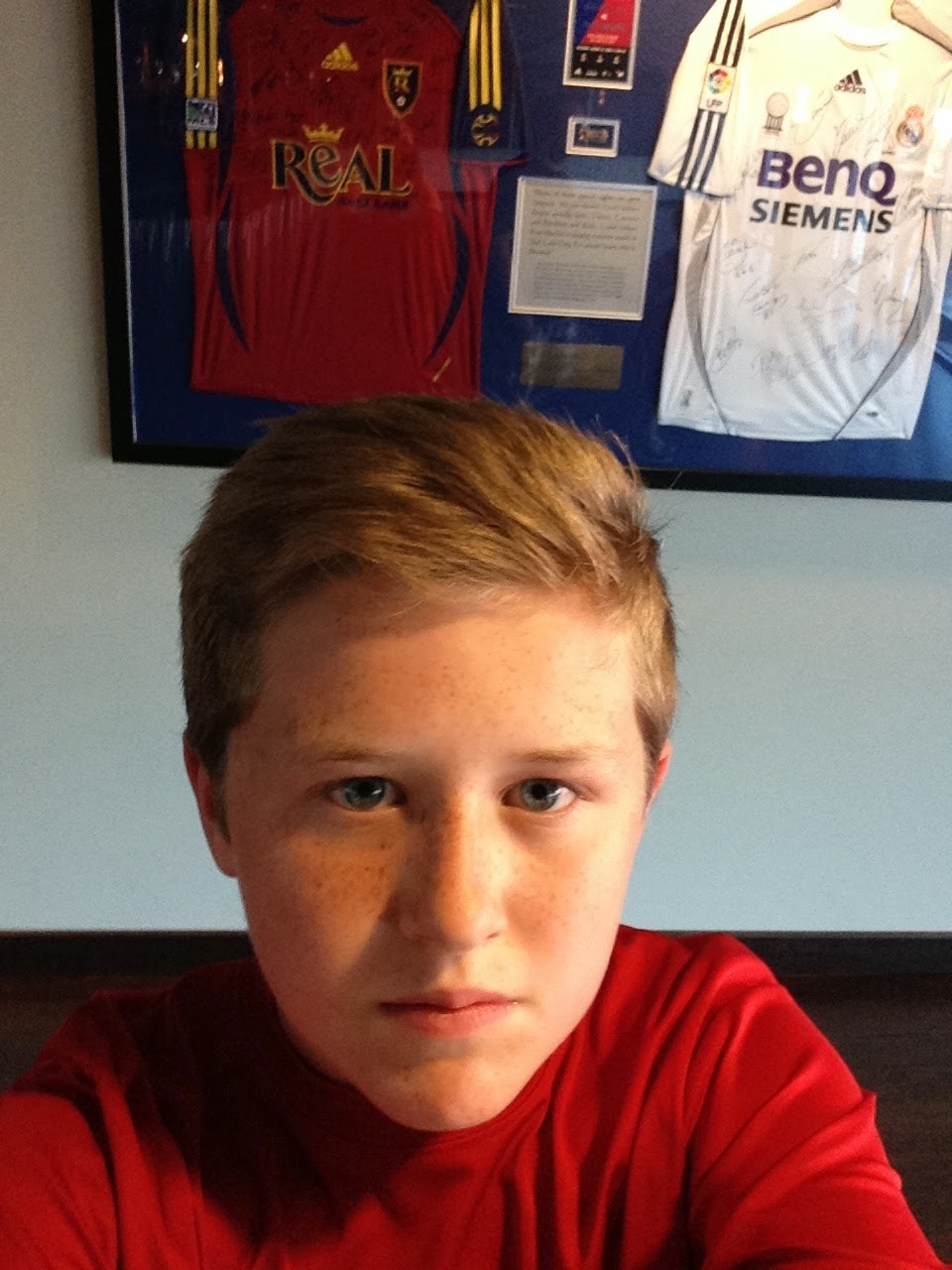 The two hour visit included a stop at the gift shop (to buy a Real pennant for players to sign), a tour of the club house, putting on cleats in the visiting team locker room, 90 minutes of training on the field with three of the players and then a photo op,autographs and Q&A with the players. Marie enjoyed sitting in the stands watching and taking photos with Joel's i-pod. Joel took a few selfies and a nice panorama shot of the stadium. 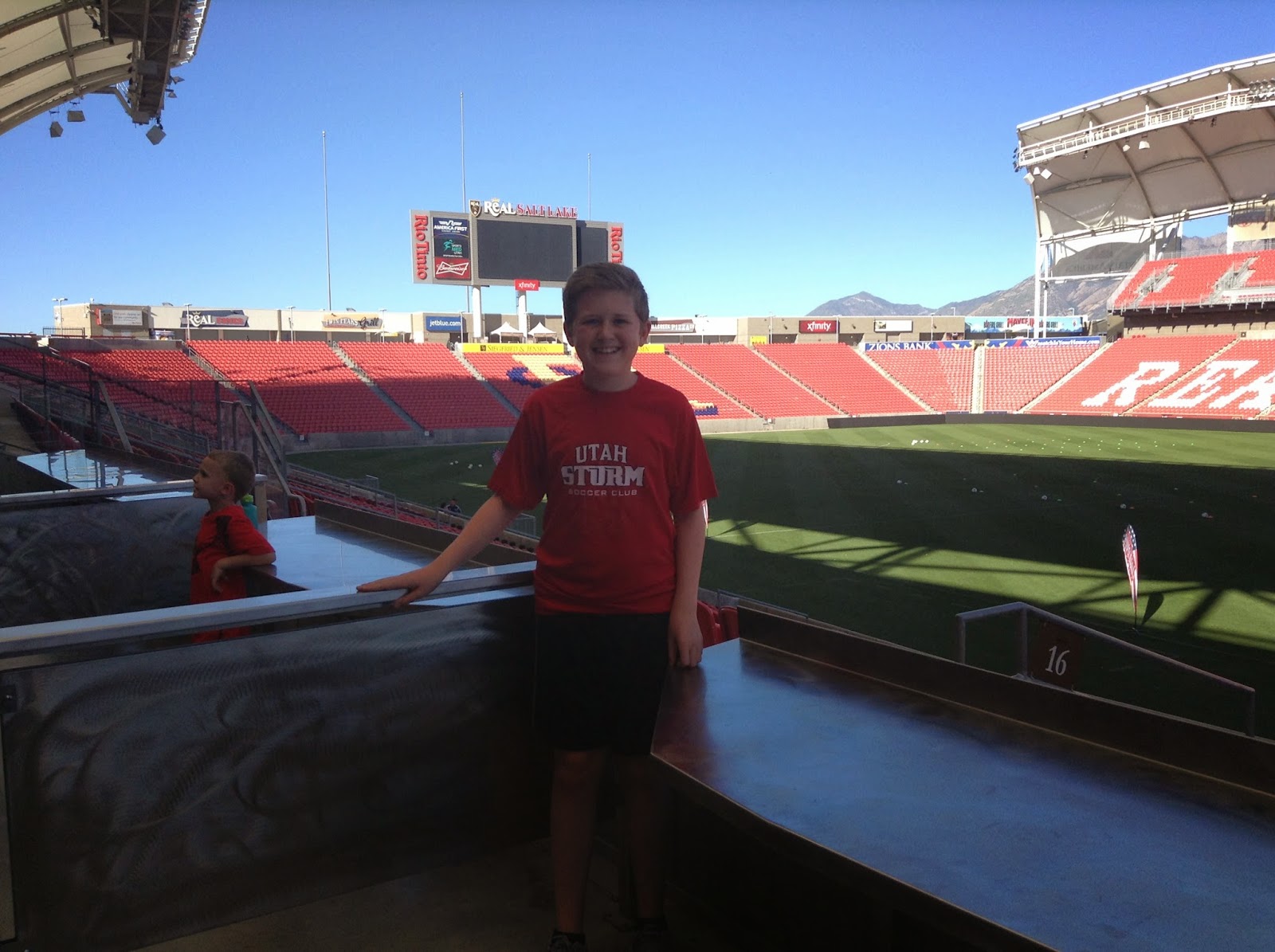 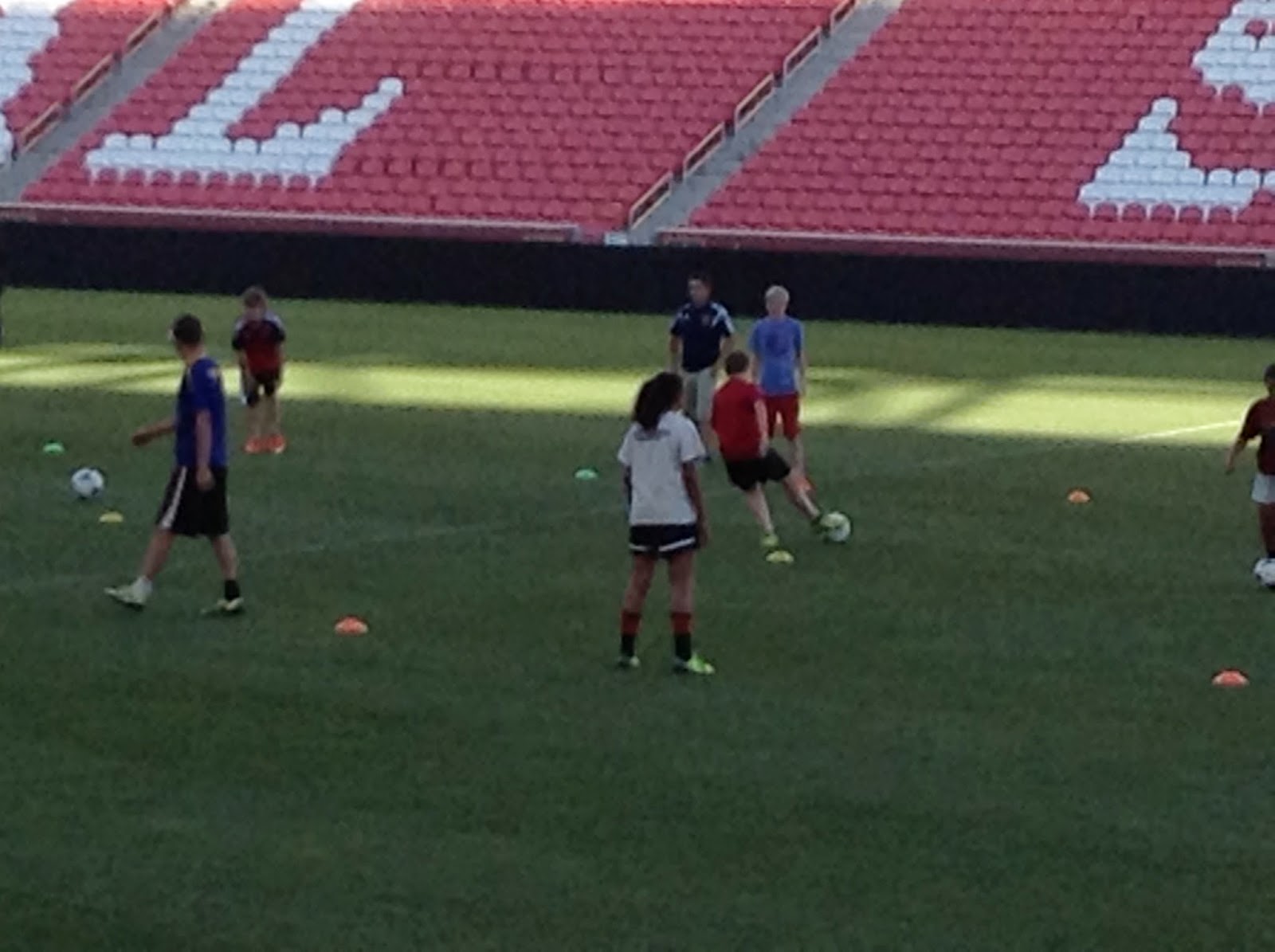 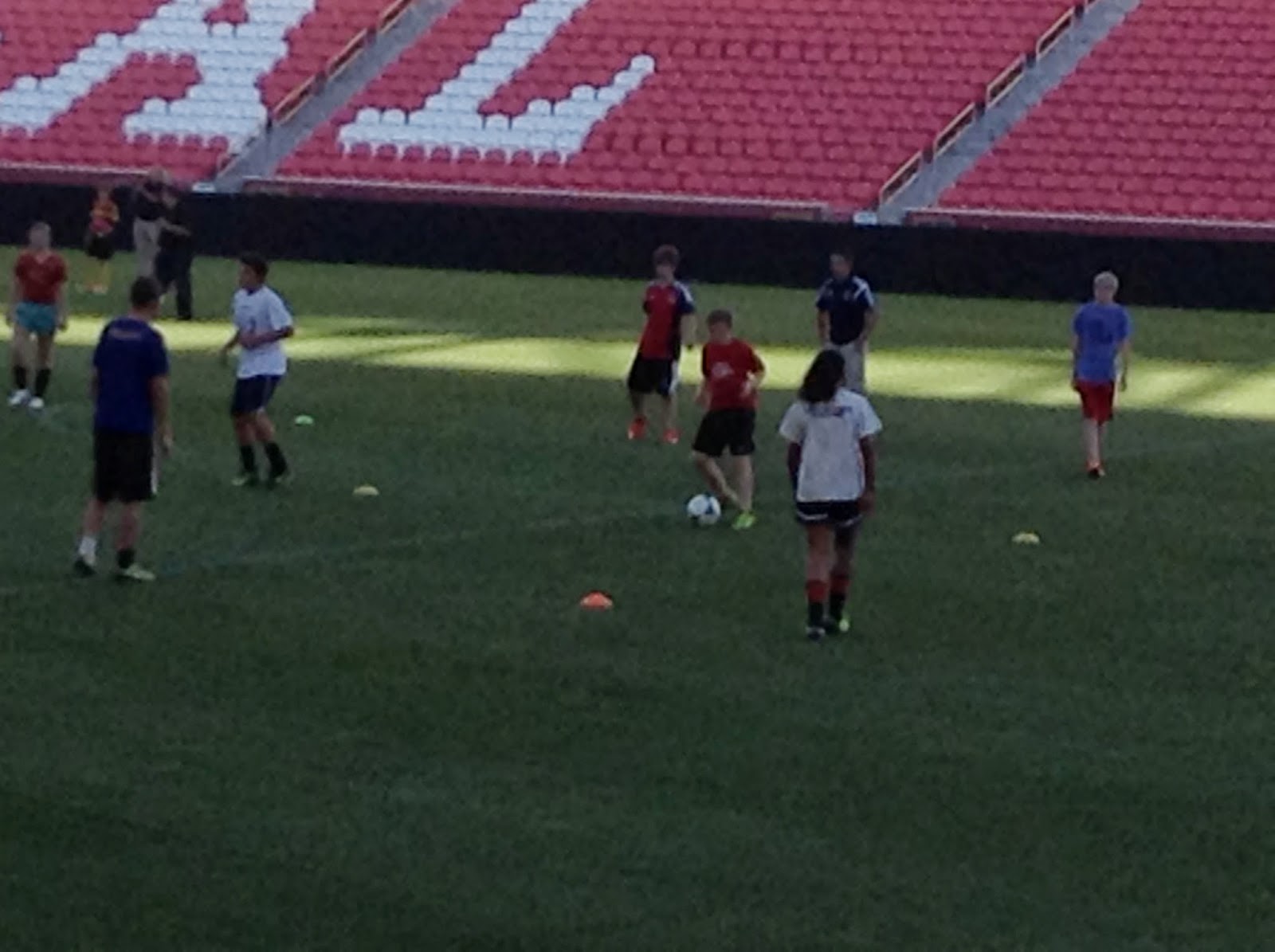 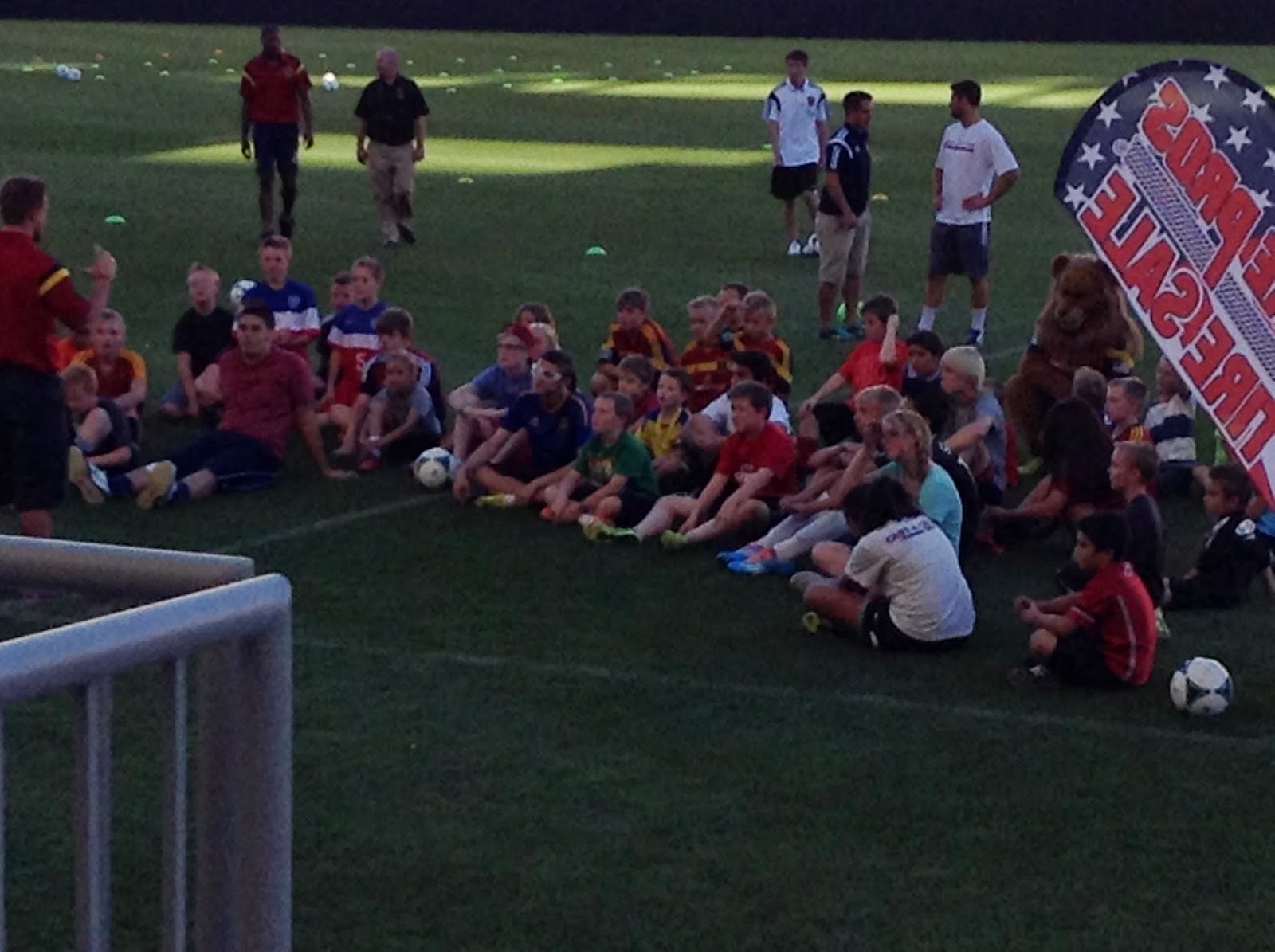 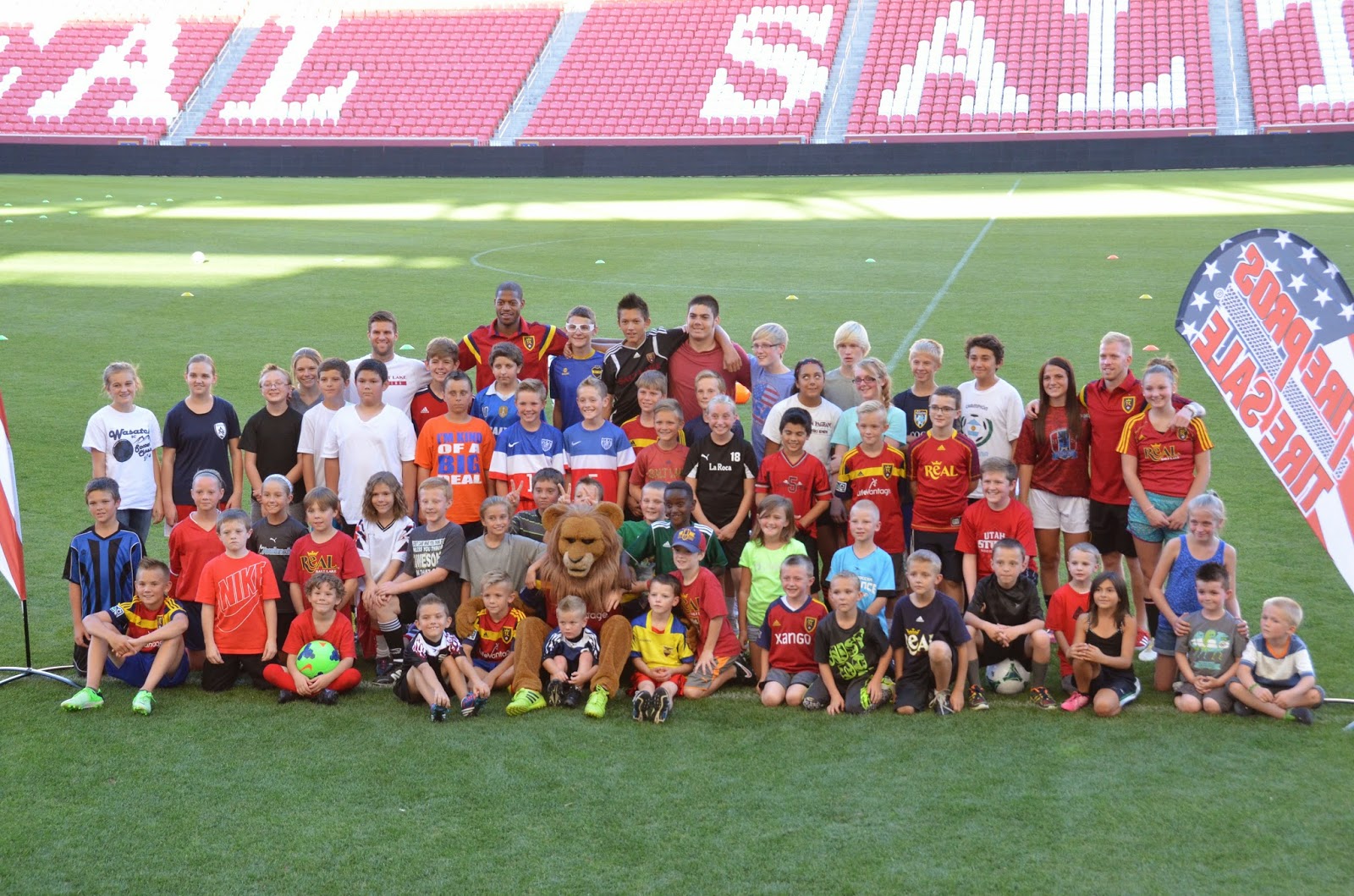 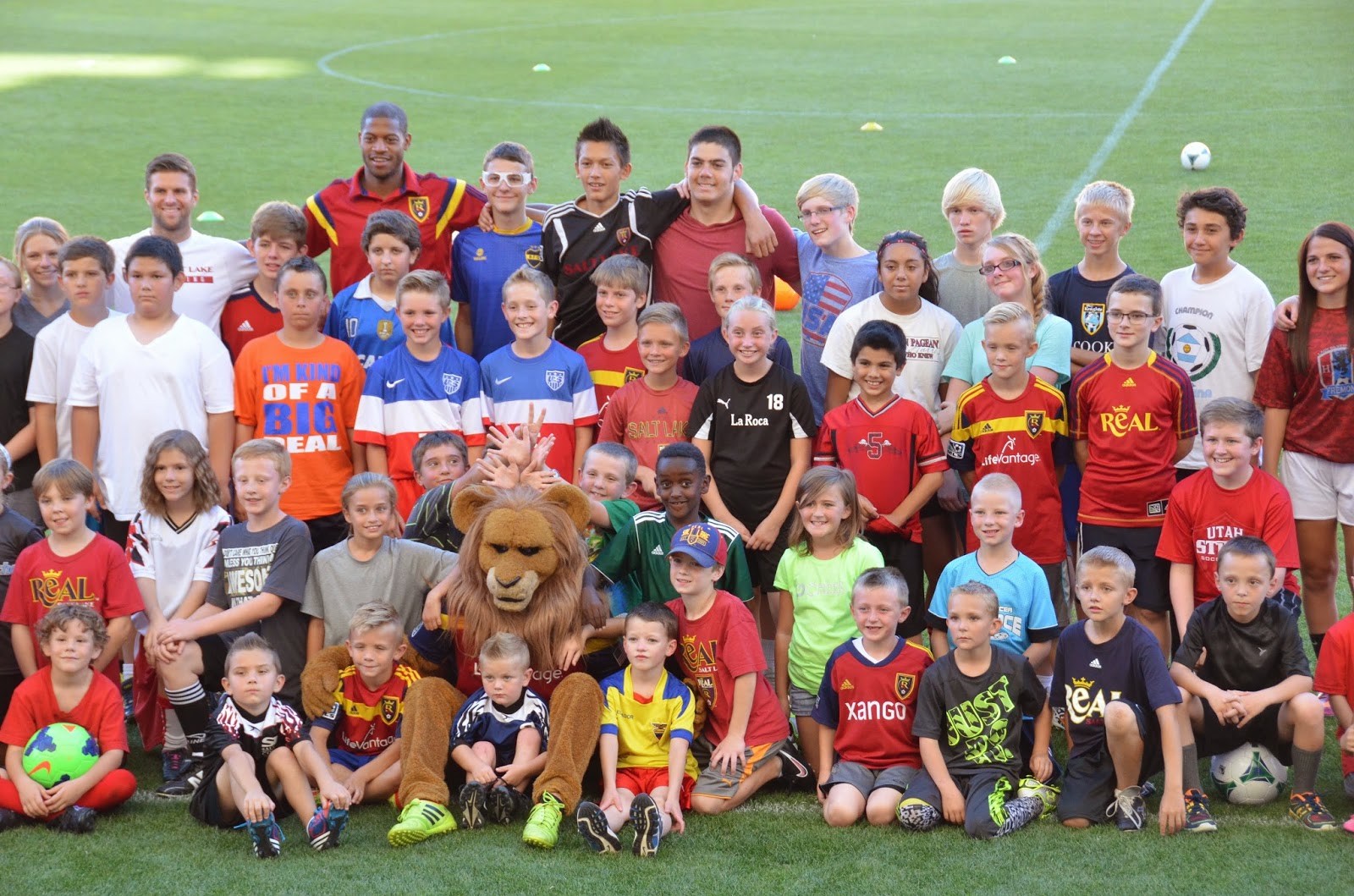 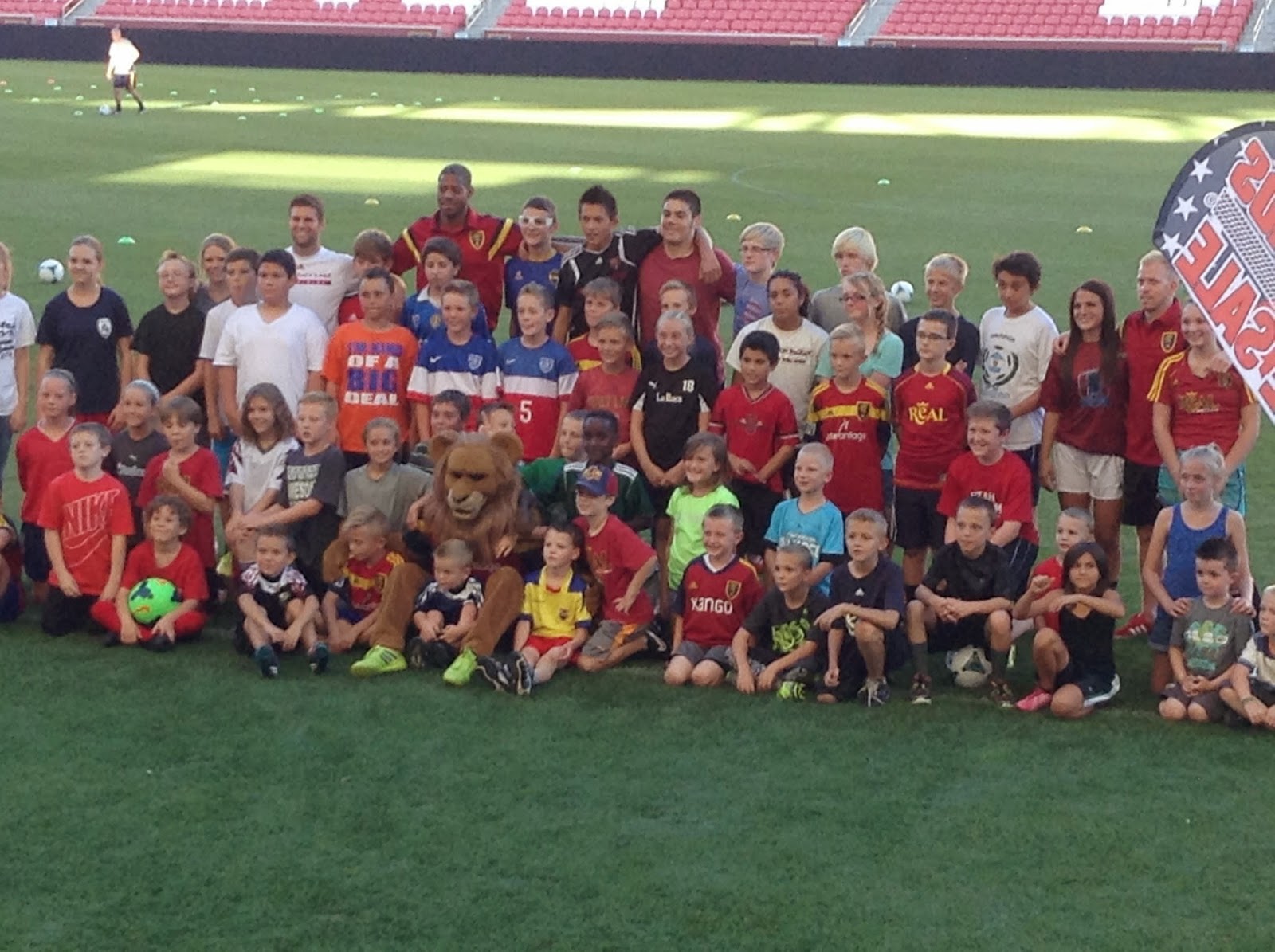 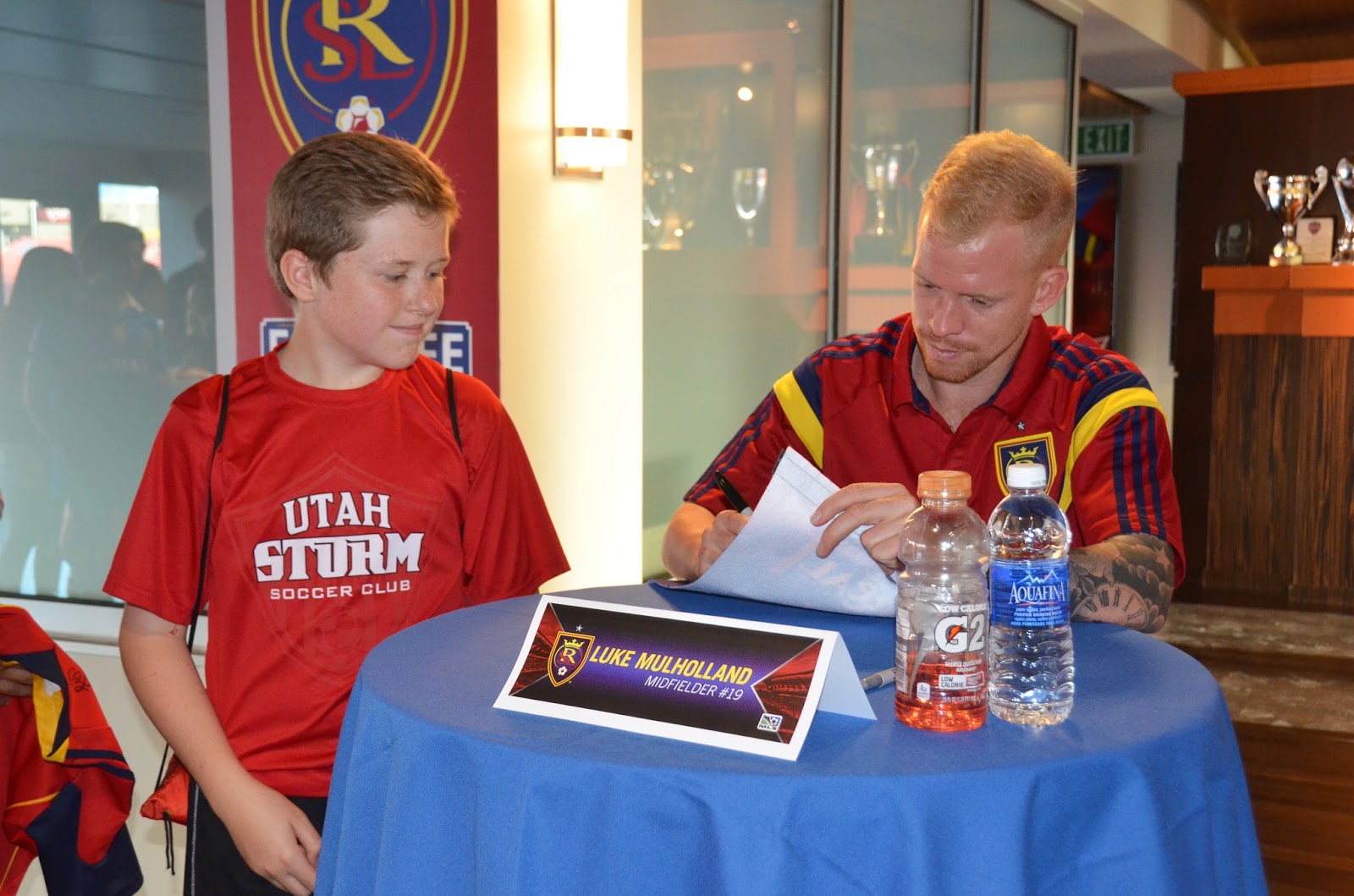 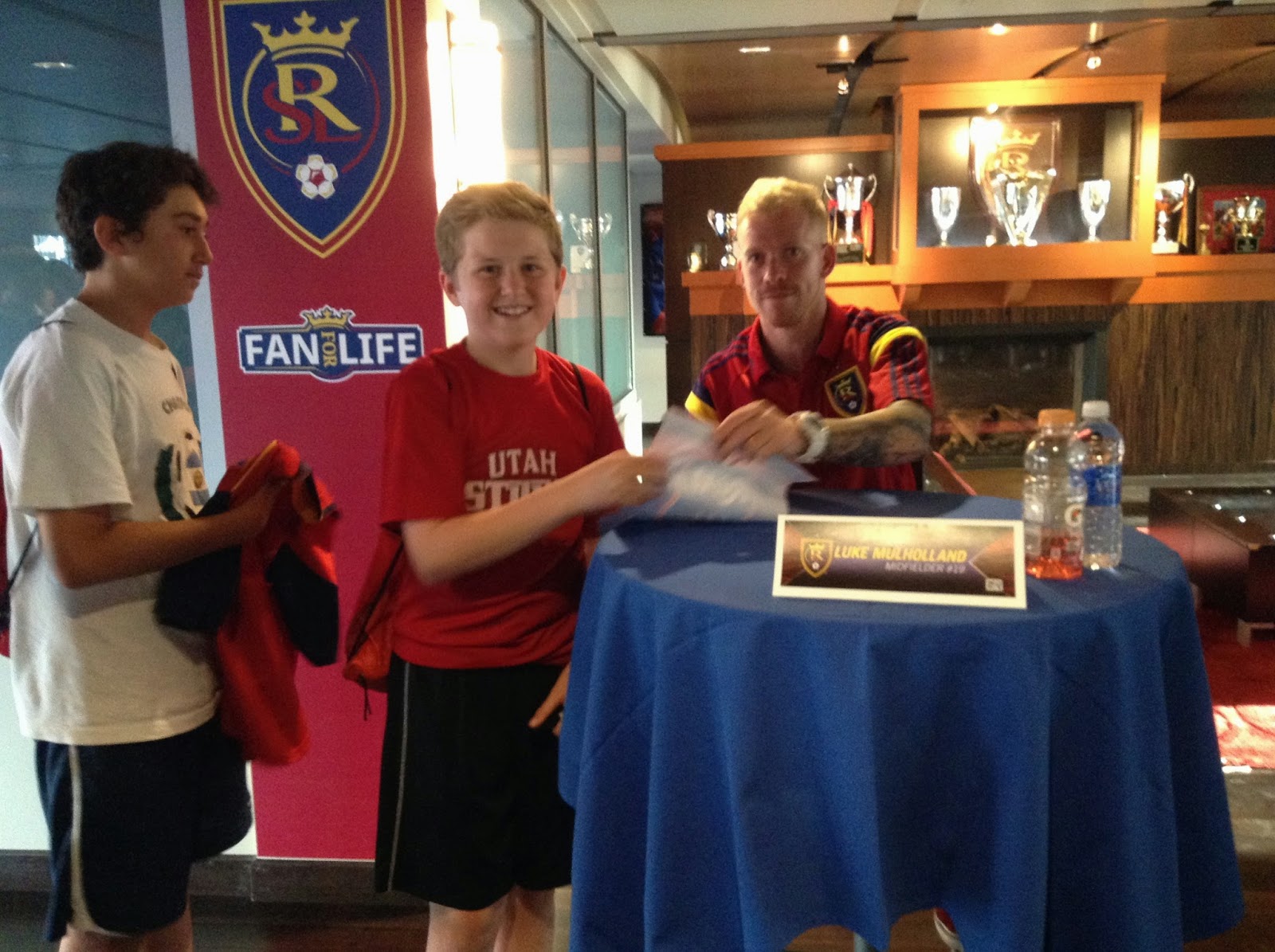 With Luke Mulholland (from England), who Marie thought was really nice. 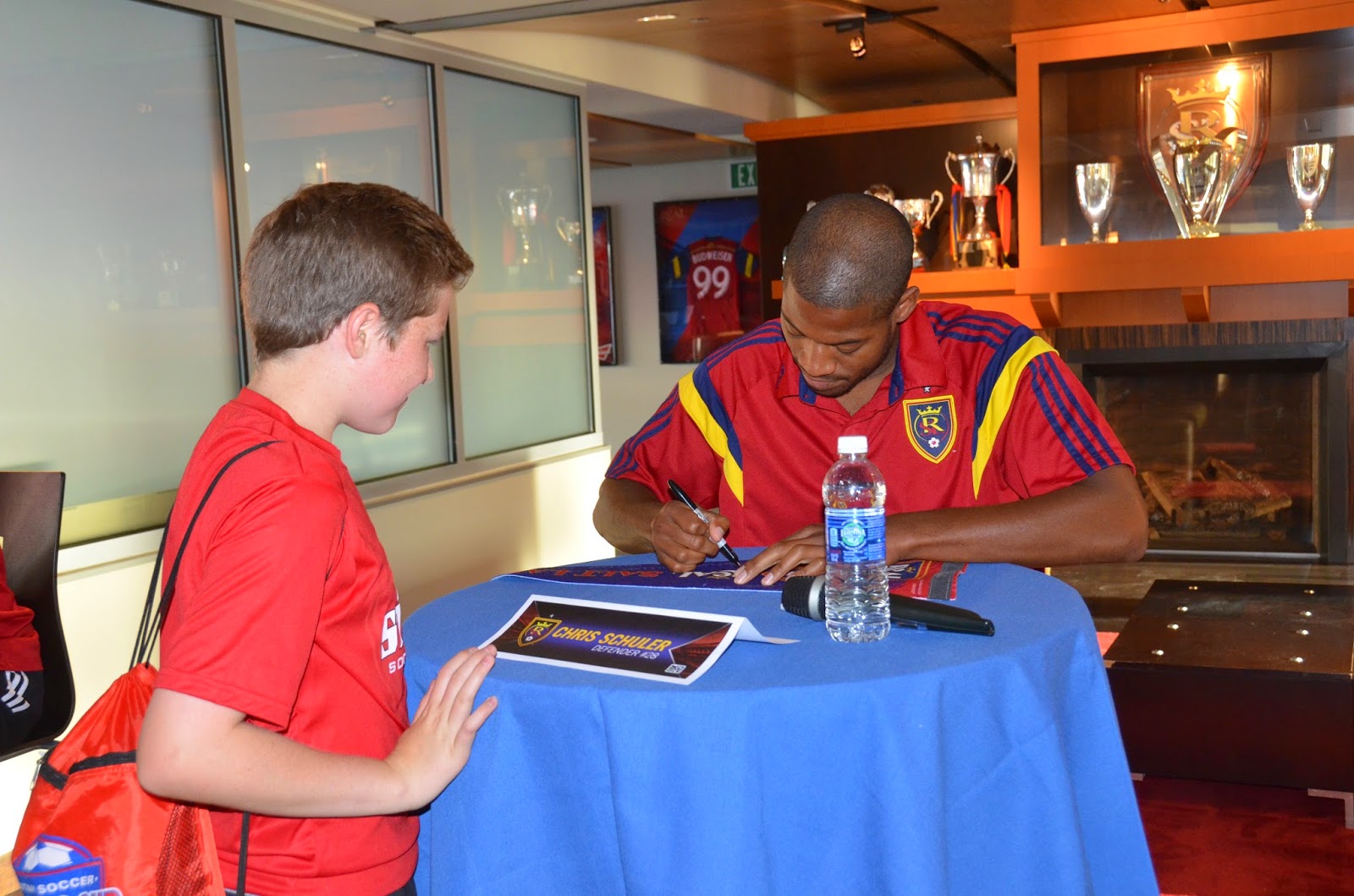 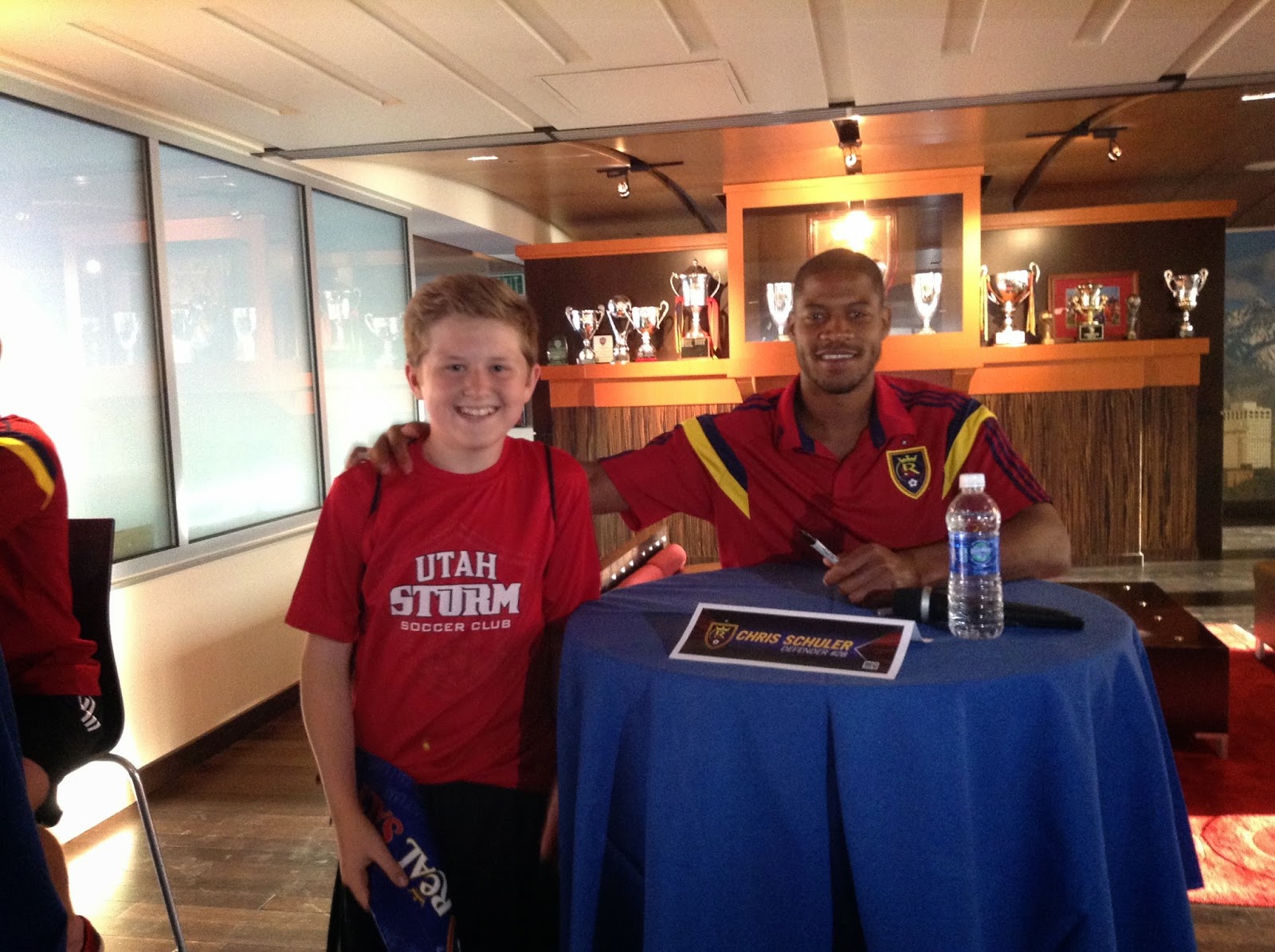 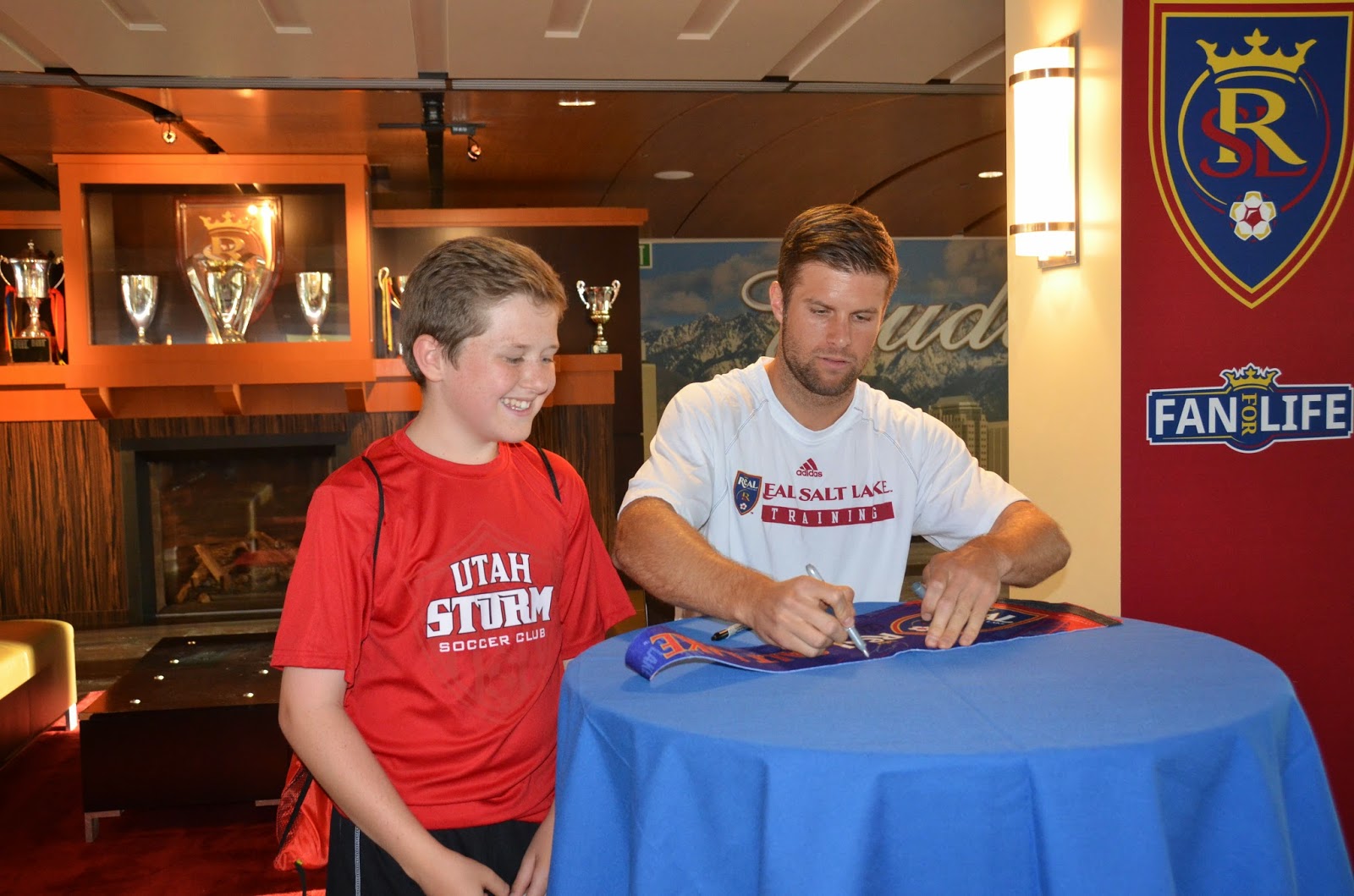 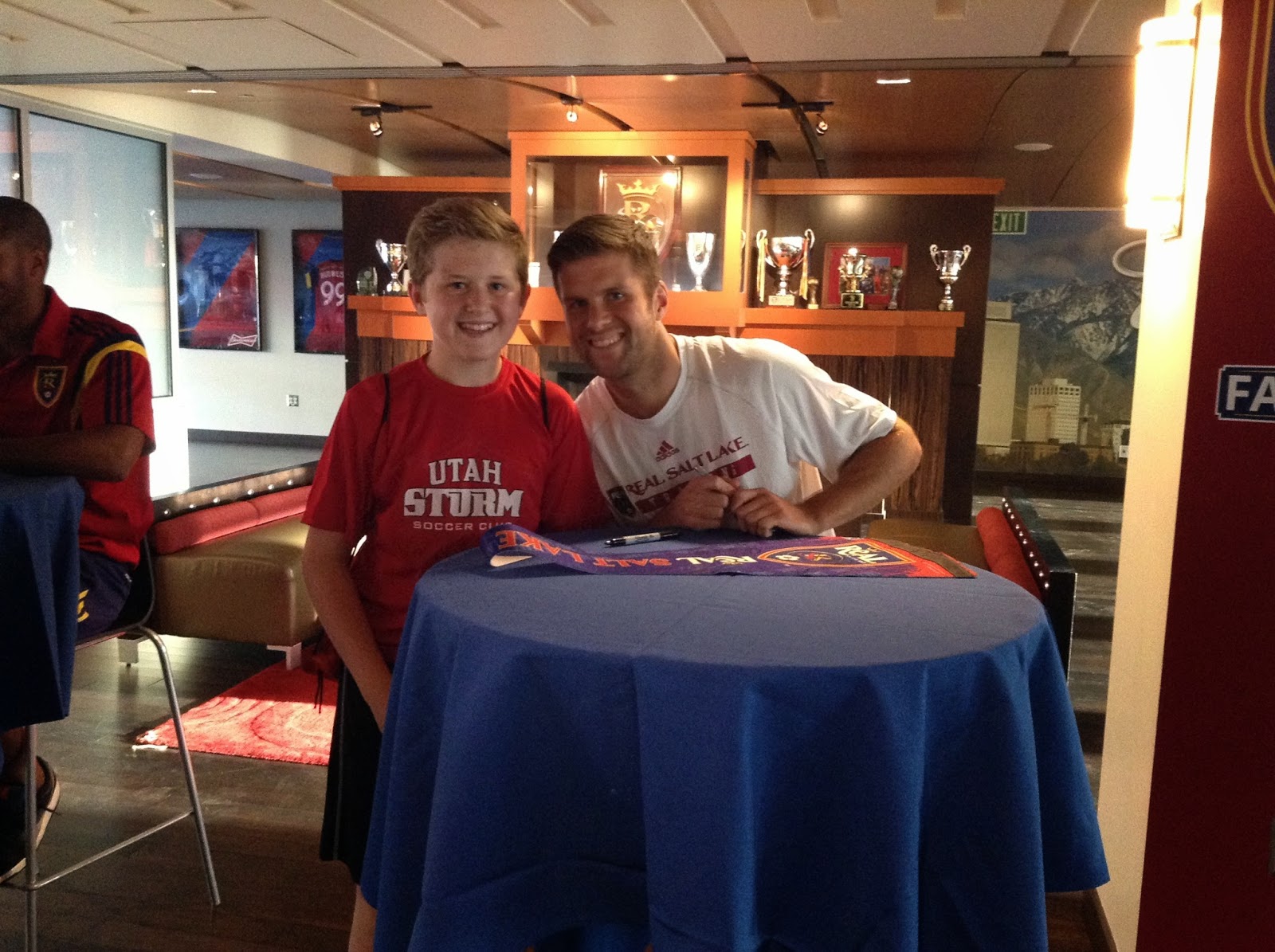 With Chris Wingert. Joel came home with a new soccer ball, posters, Real car air fresheners, Real eye glass cleaner and a $25 gift certificate to a Tire Pro. When Marie and Joel got to the car, one of the tires was flat. Before Marie could even get started changing the tire, one of the many tire shop owners offered to help and then Riley Johnson walked by and Marie called him over to help to. They did it lickety split--even though both tire shop owners confessed they seldom have to change tires any more. Riley then took the tire which he will have repaired in the morning for Marie to then pick up. When Marie stopped at a gas station to have the spare tire inflated a little more, another nice man offered to help. Marie is amazed at all of the home town goodness and friendliness she has been experiencing. 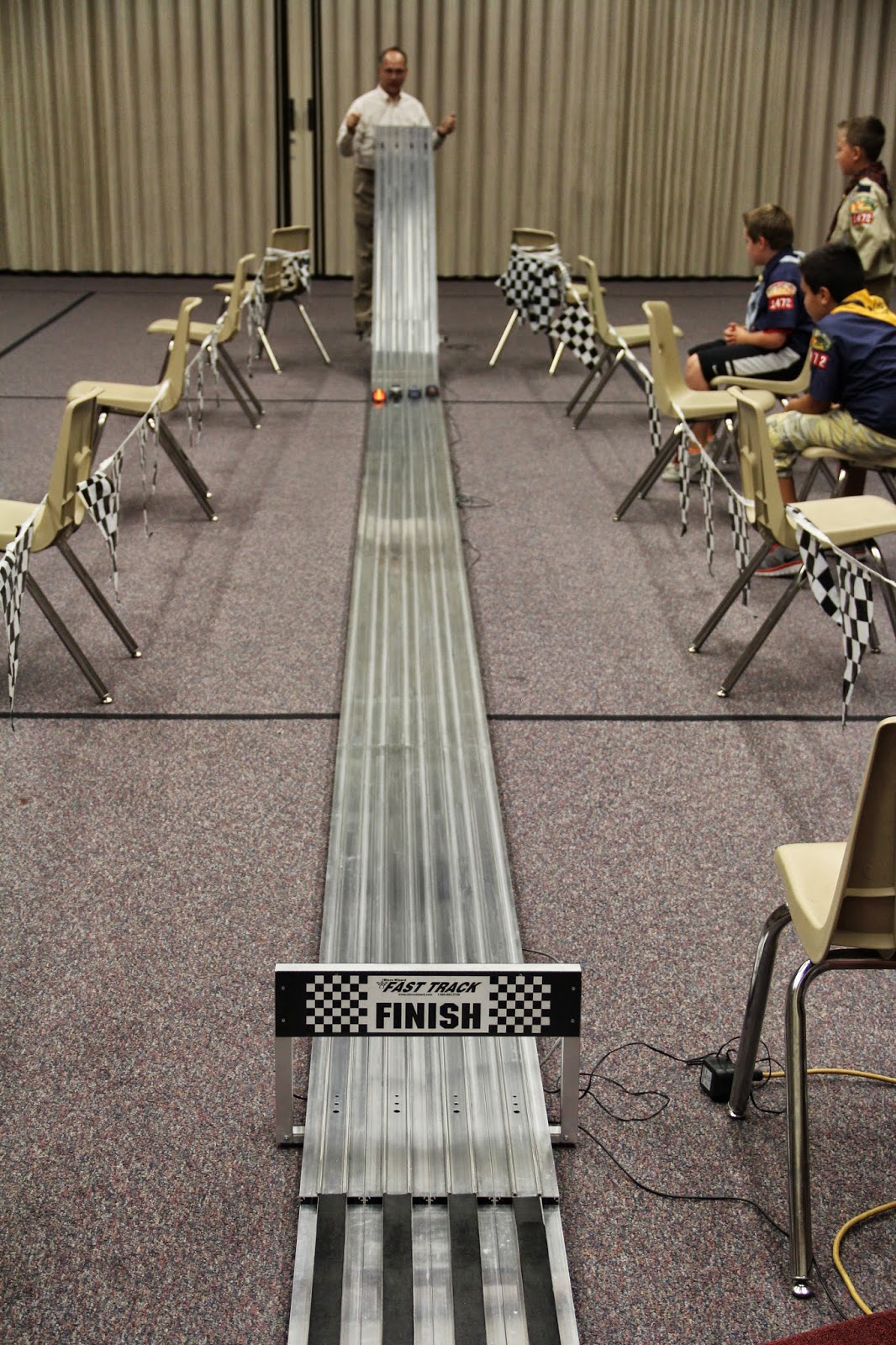 I am not much of  Pinewood Derby dad. It is a chore that must be done. Luckily there have always been nice neighbors with saws. This year neighbor Jerry let us use his band saw to cut a wedge shaped car--Will's design and choice. Will then sanded, chose the paints, came up with a paint design and did the painting (with some help with taping).  I put on the wheels, glued them in, added weights (bringing the 2 oz car up to 4 7/8 ozs--just below the 5 oz maximum weight limit) and applied lubricating graphite to the axels. We must have done something right.Will's bright red/orange/yellow car (on the left, leading out in the first heat) won all but one of the dozen heats. There were only 5 participants so that certainly helped his odds. 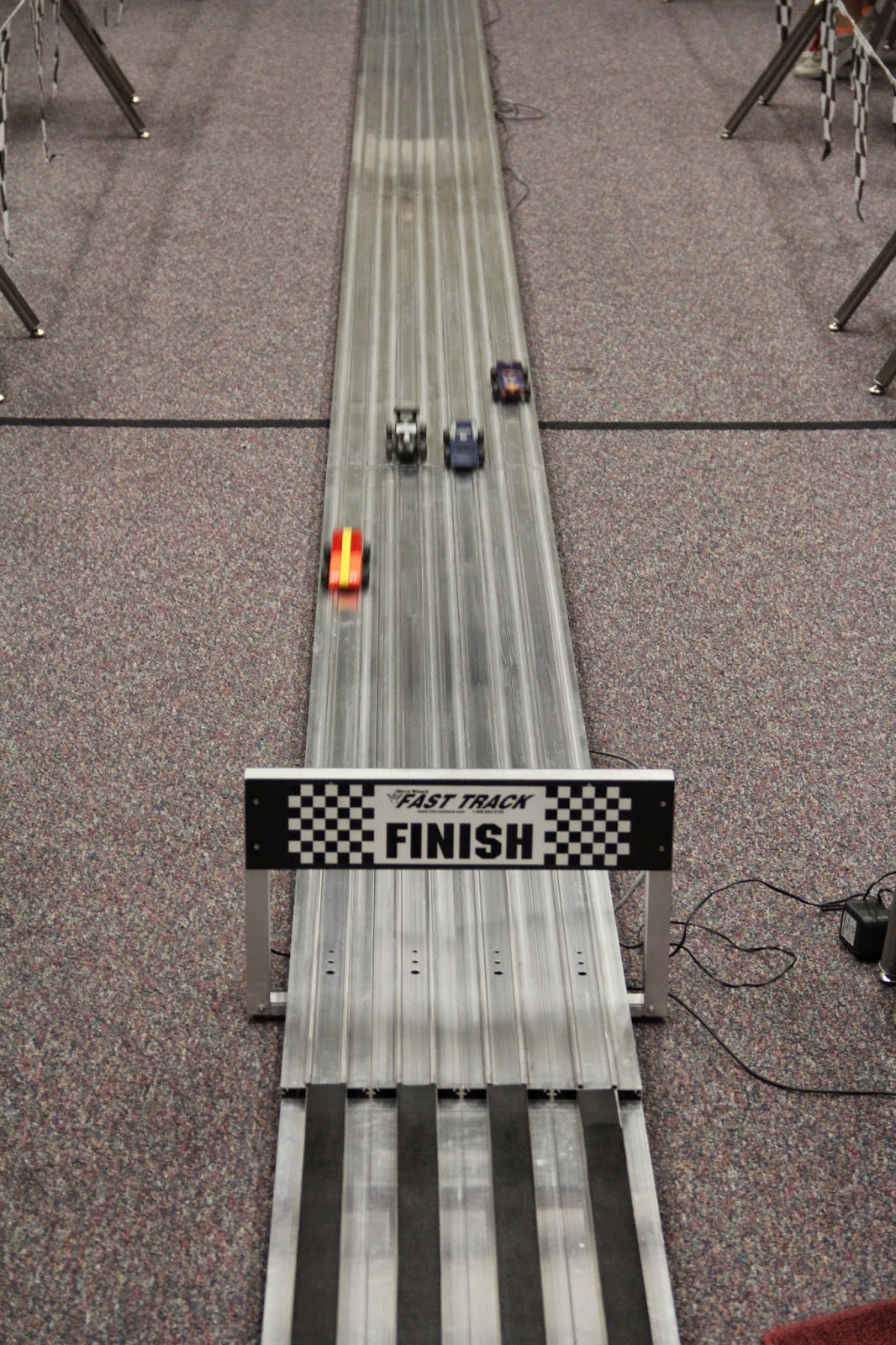 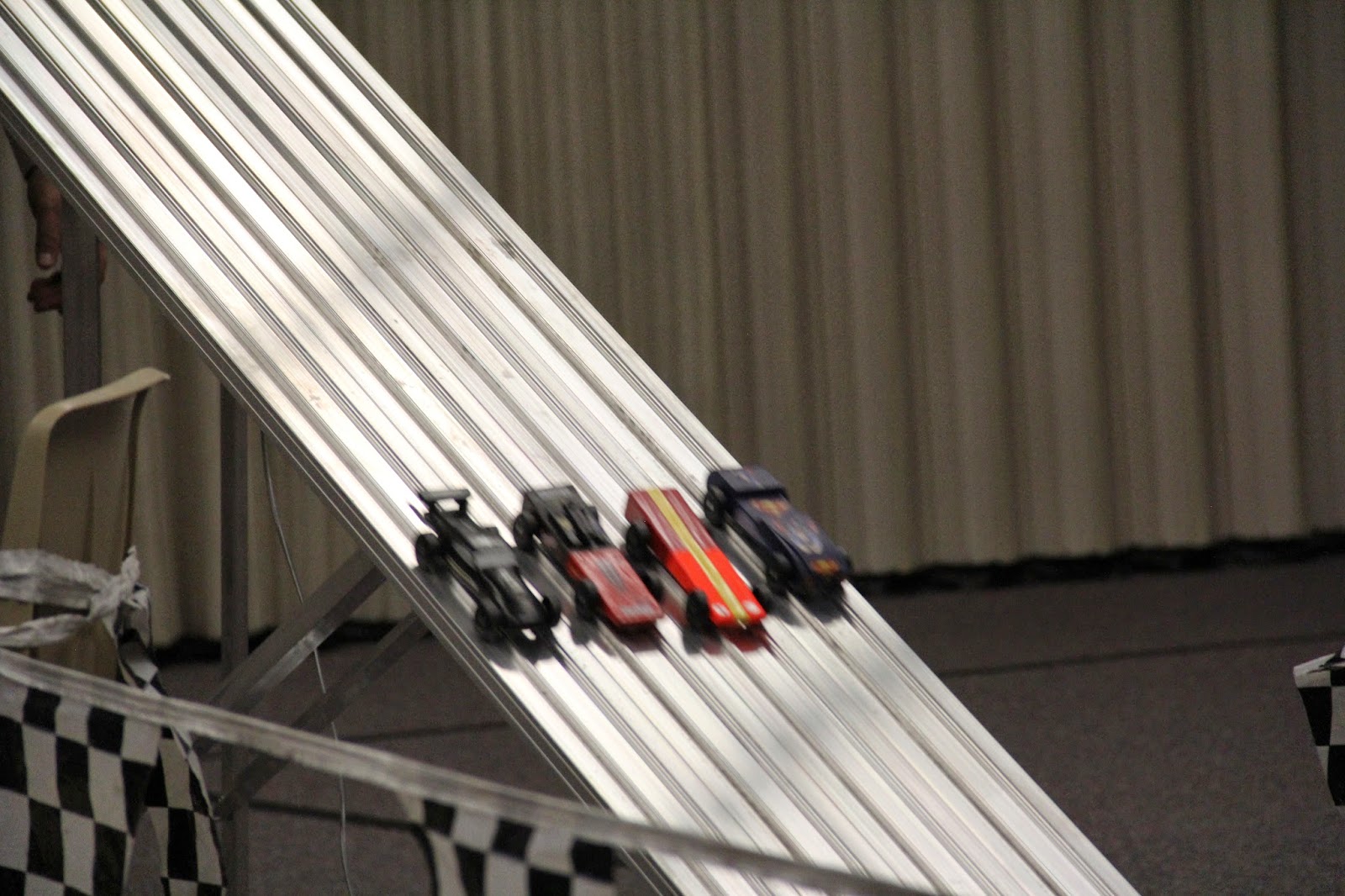 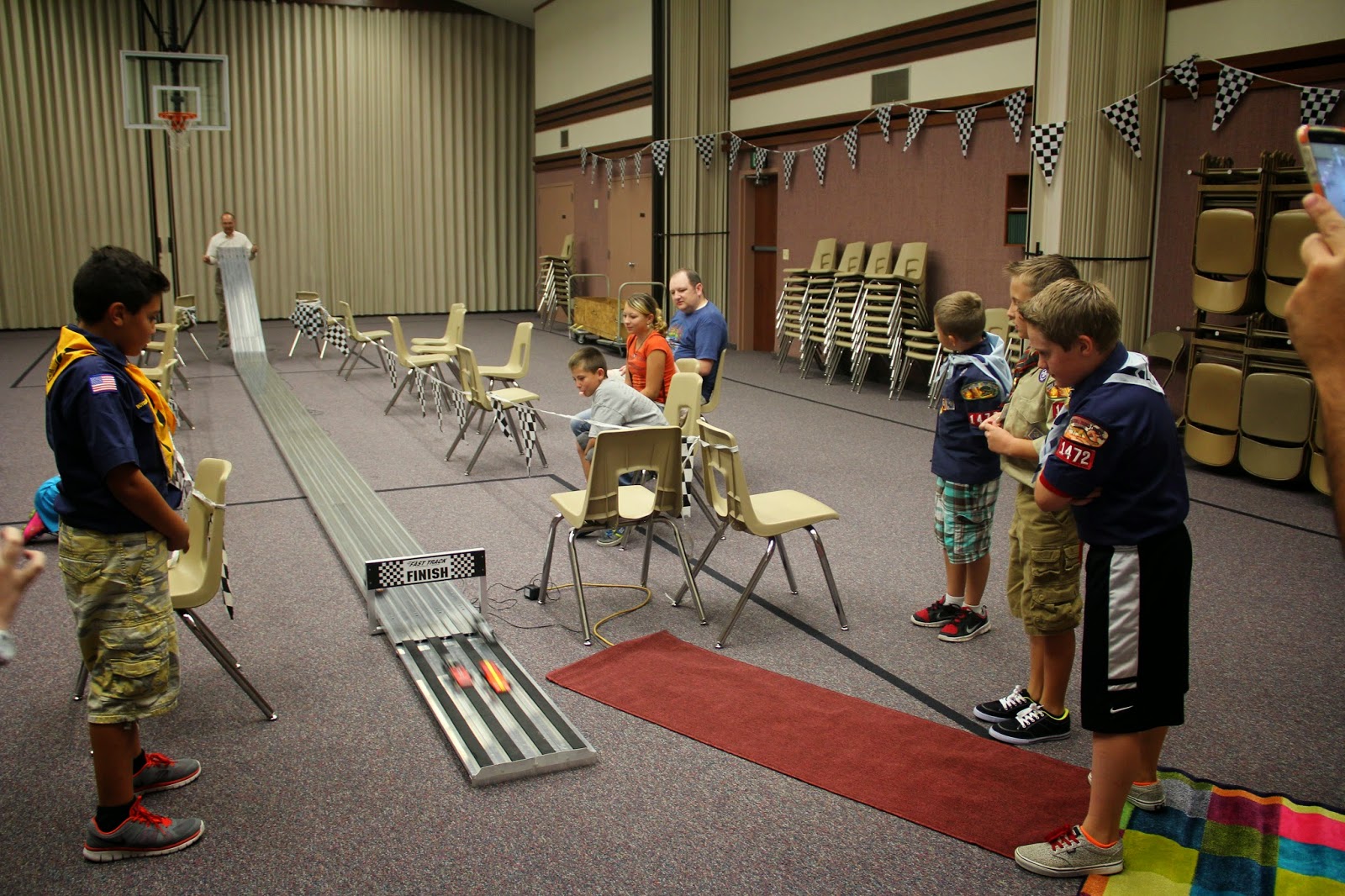 The average speed of his car in all of the races was 230 mph! We think the aerodynamic shape and the concentration of most of the weight on the bottom (in the form of legal metal bars) was what did the trick. Afterwards while playing around we had Will race the others with his car turned backwards and his car then came in last. Always just behind Will was another wedge shaped red car. 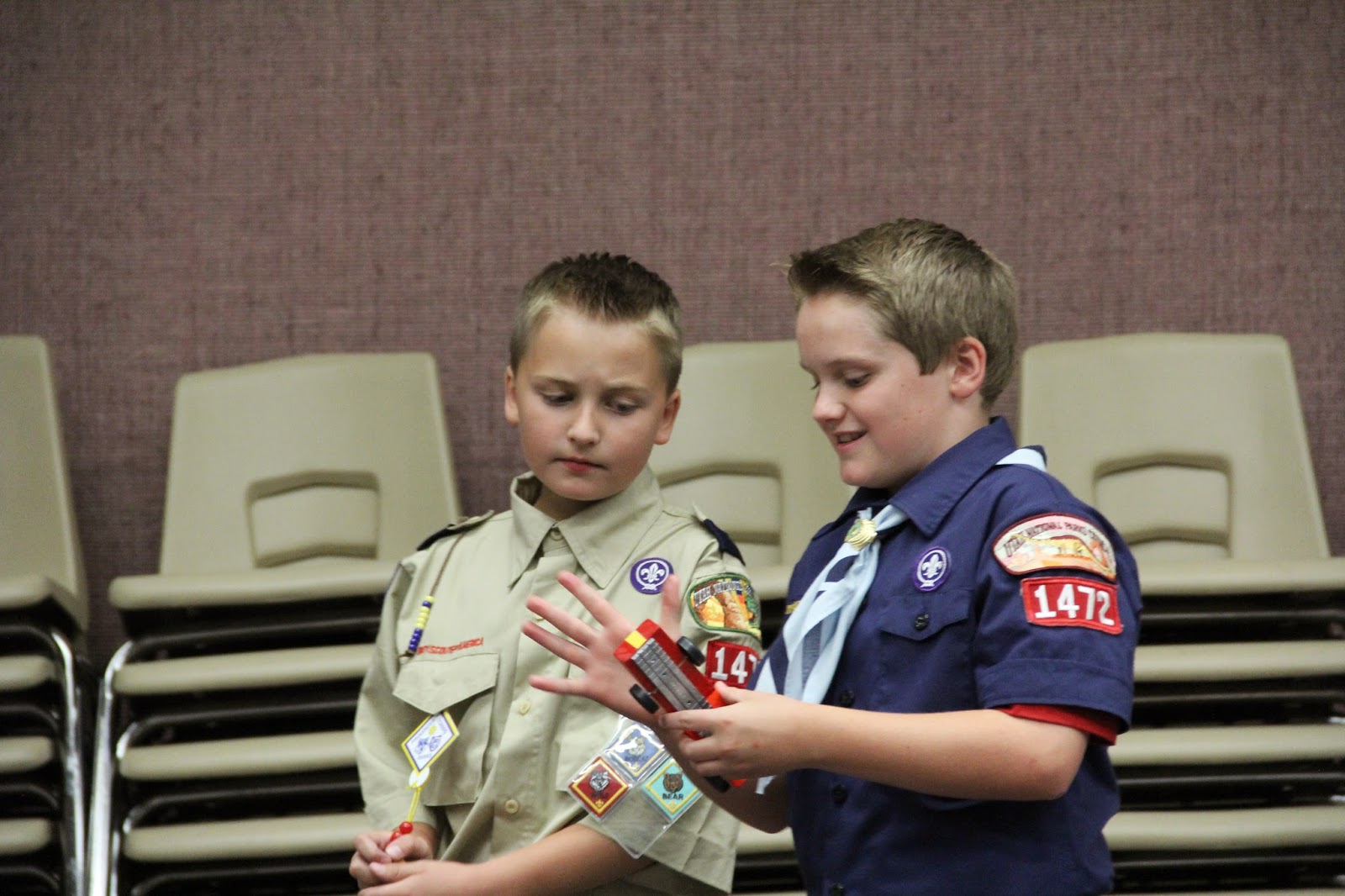 Notice the metal bars on the bottom. (I screwed them in between the flag ceremony and the uniform check). His friend Harrison has a talented wood working dad who helped make a very cool fancy shaped car (black colored on the left in the close-up above) which lacked Will's aerodynamics. Sometimes skill-less dads and their sons get lucky. 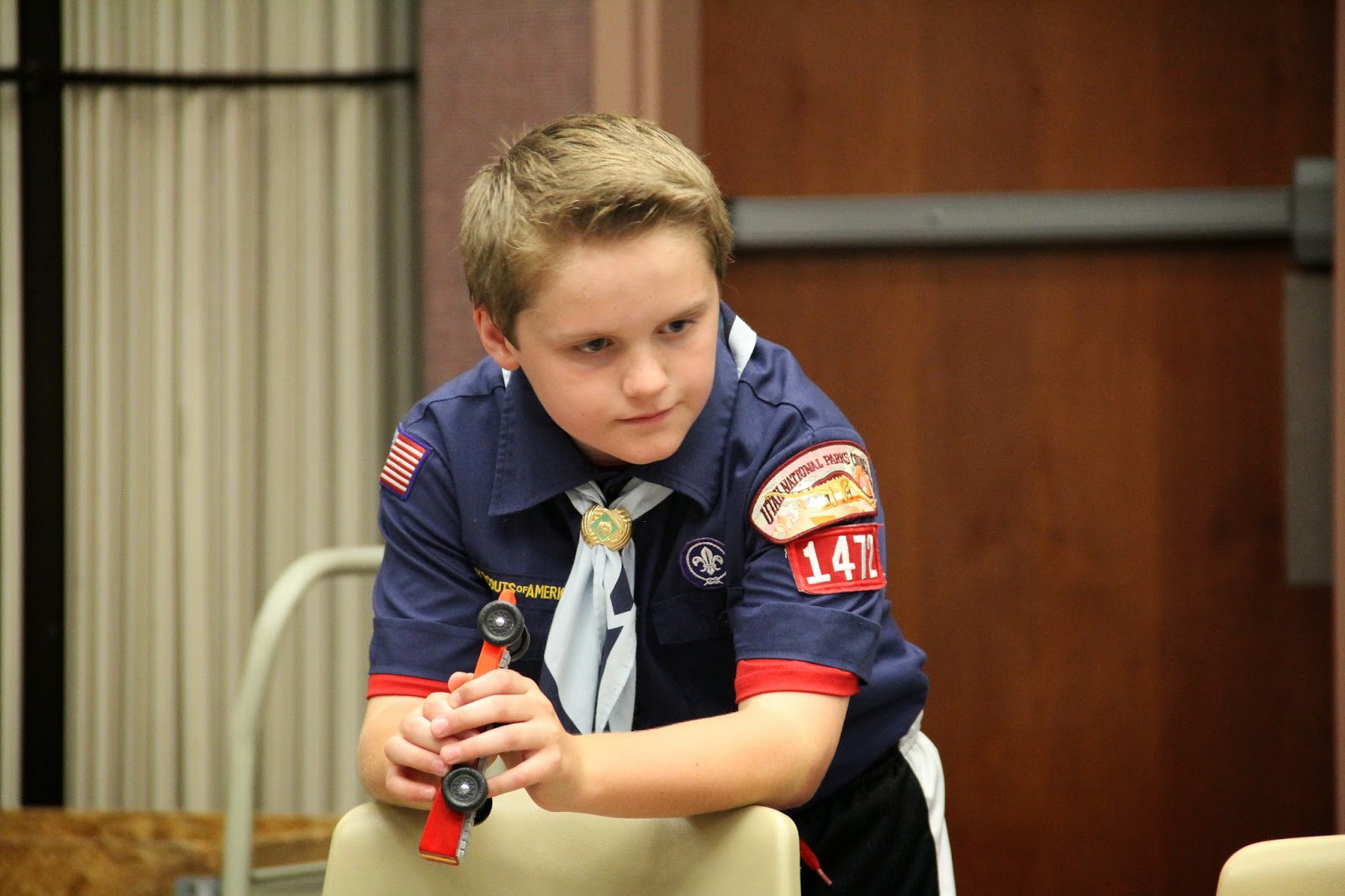 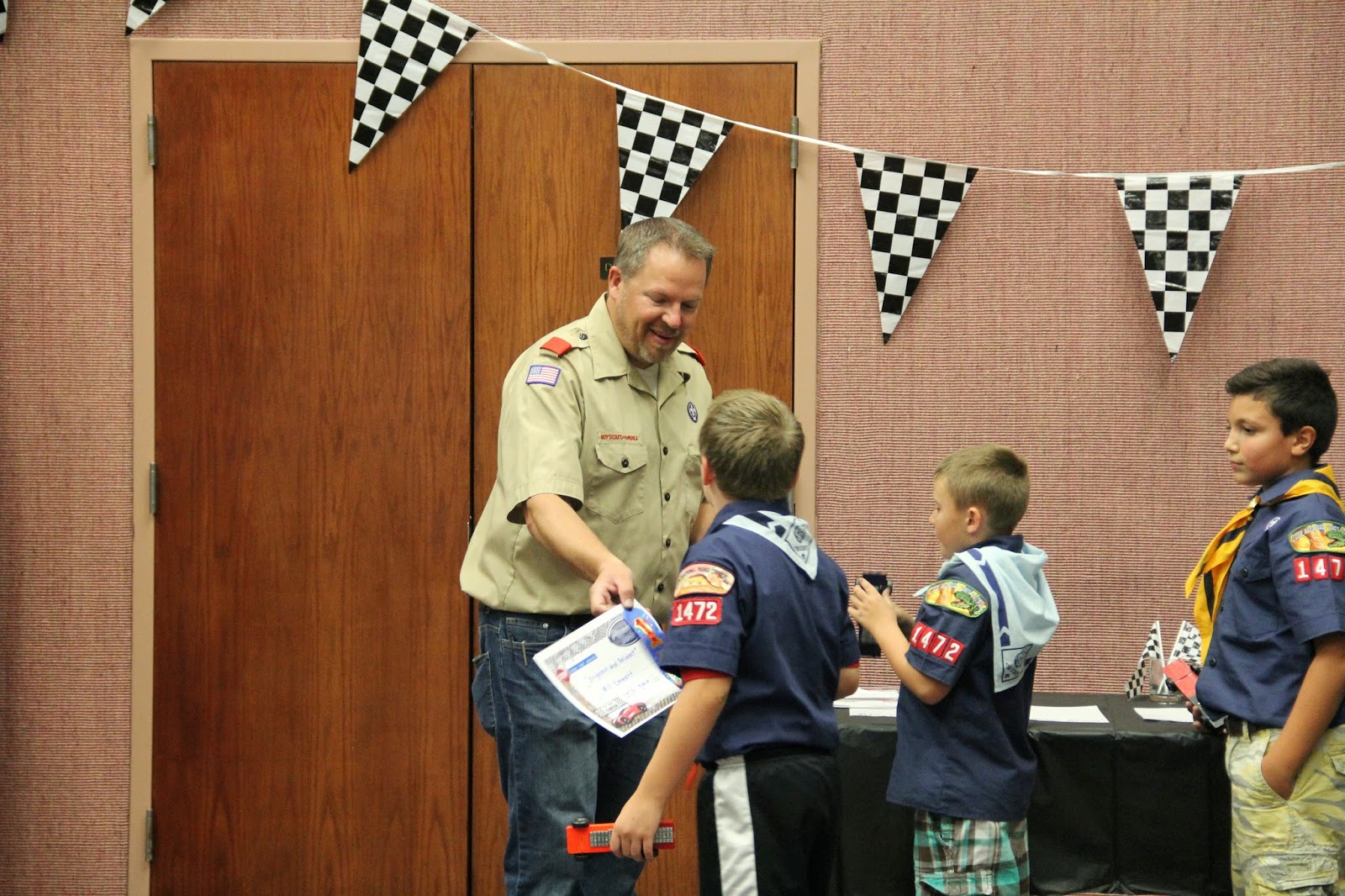 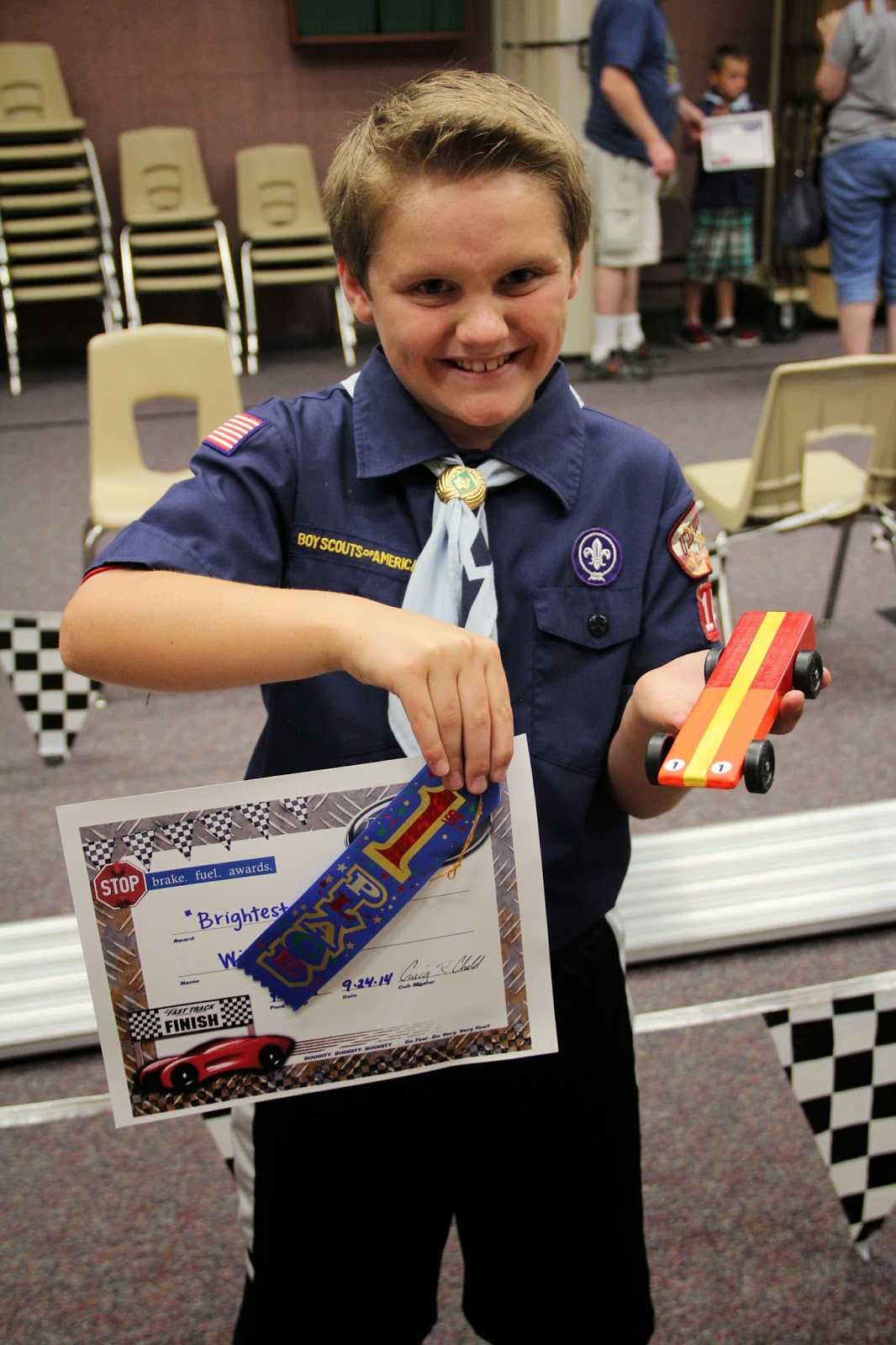 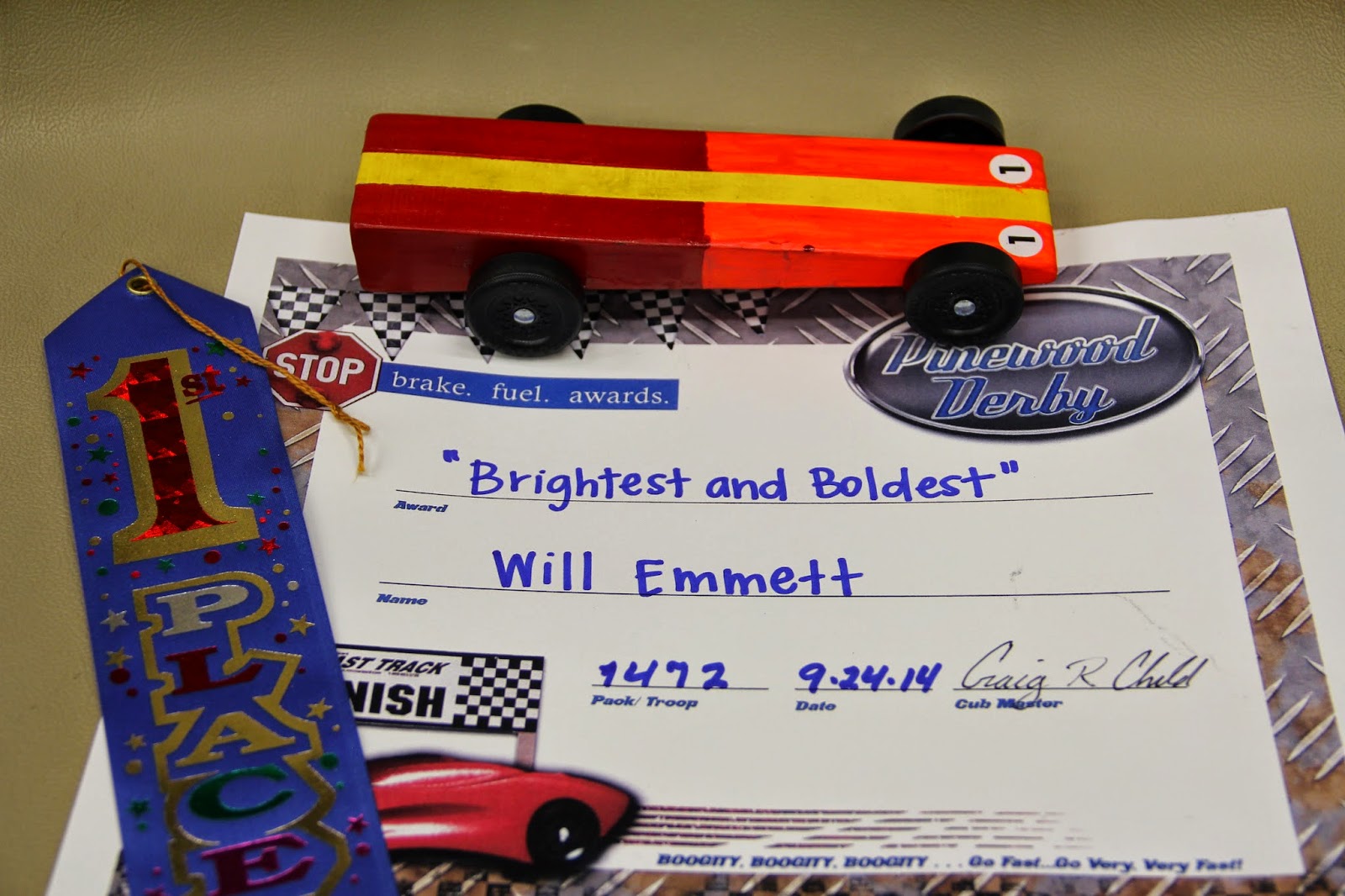