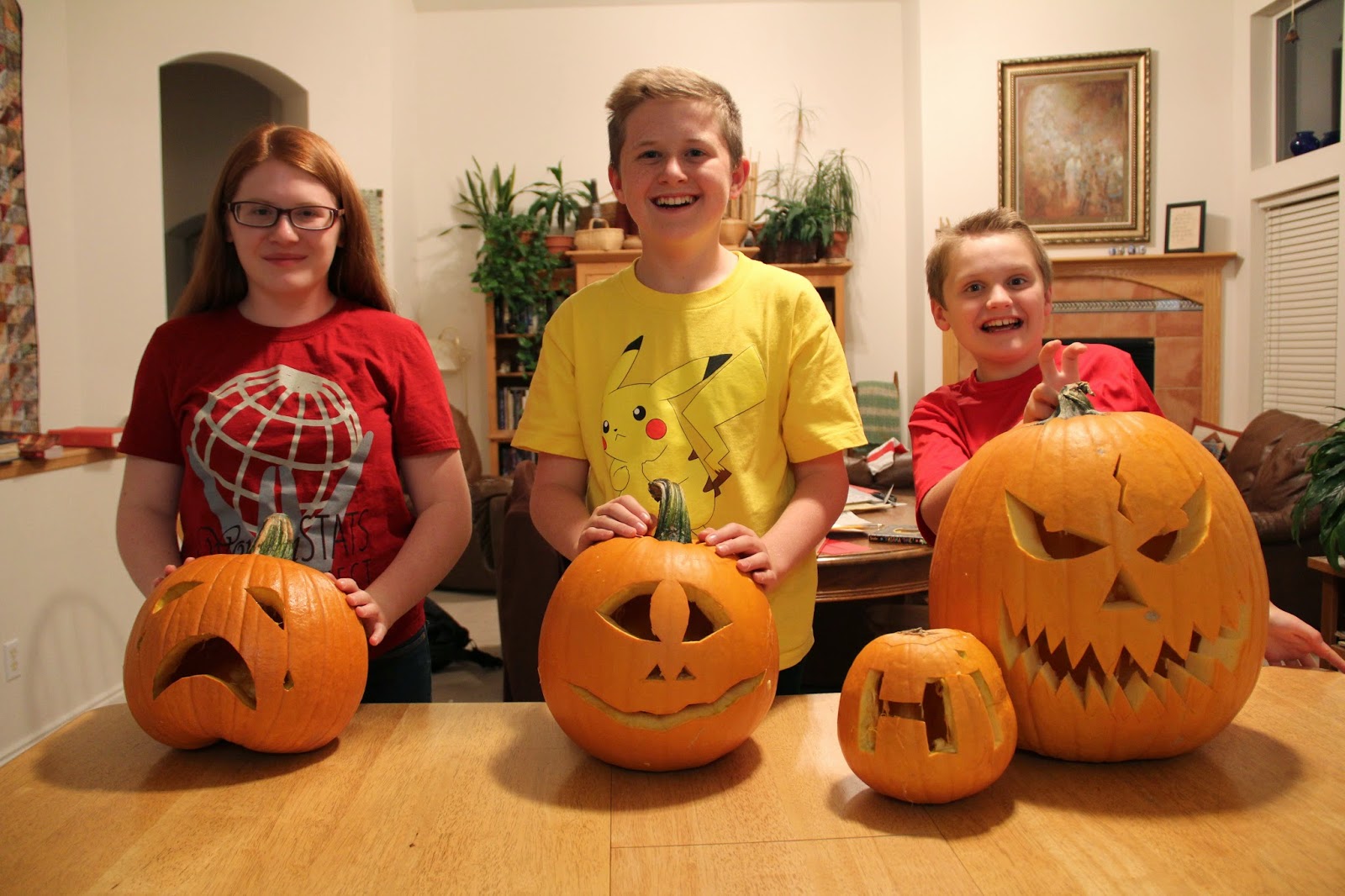 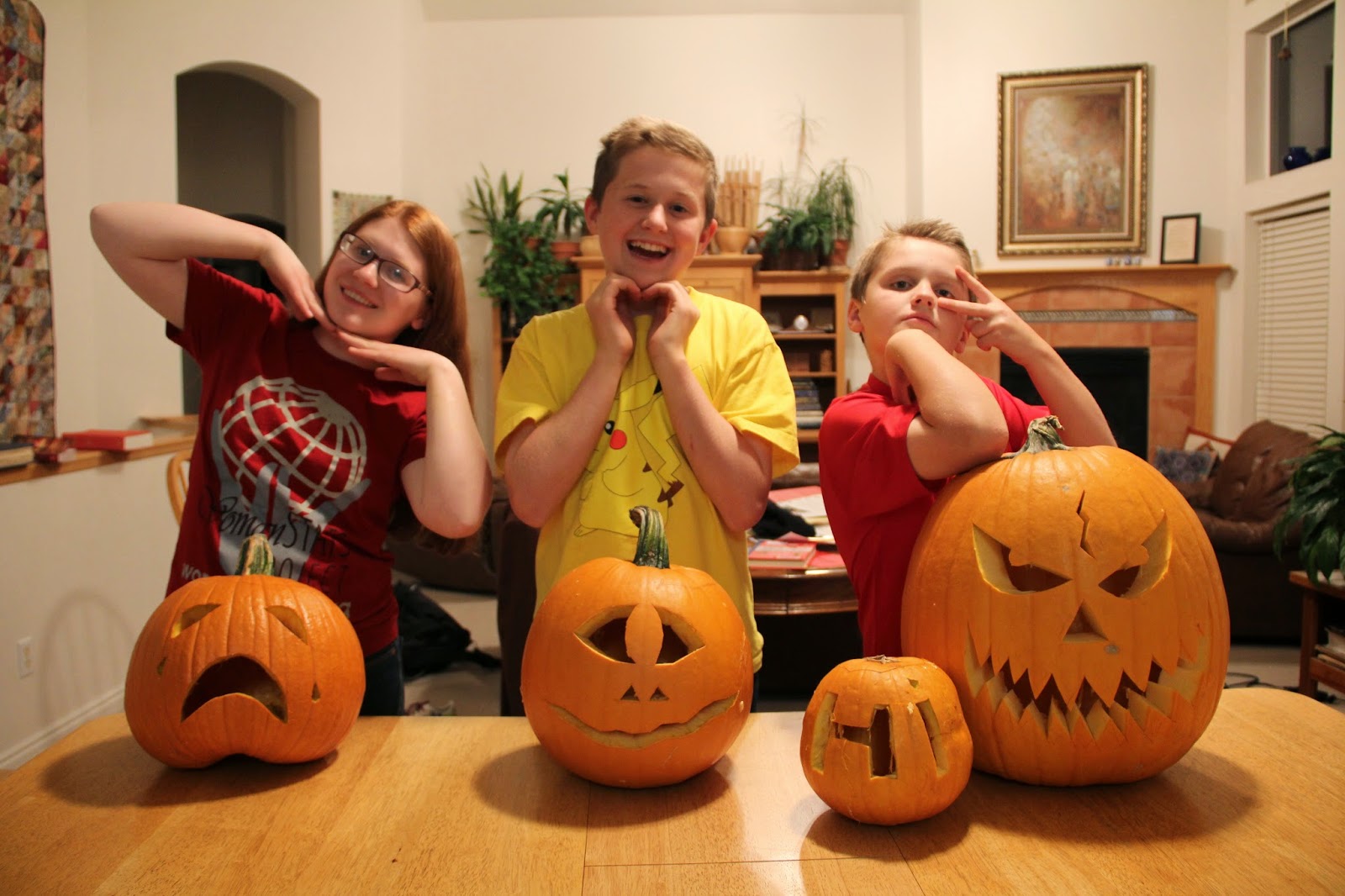 Sarah carved a sad pumpkin. Joel had me carve (his was a very hard pumpkin) a cyclops and Will had me carve a scary pumpkin with a forehead scar. Will carved the Hi. Joel and Sarah's pumpkins were from our garden. We bought Will's big pumpkin and the small pumpkin was one Will brought home from school--a gift to each student from local farmers. 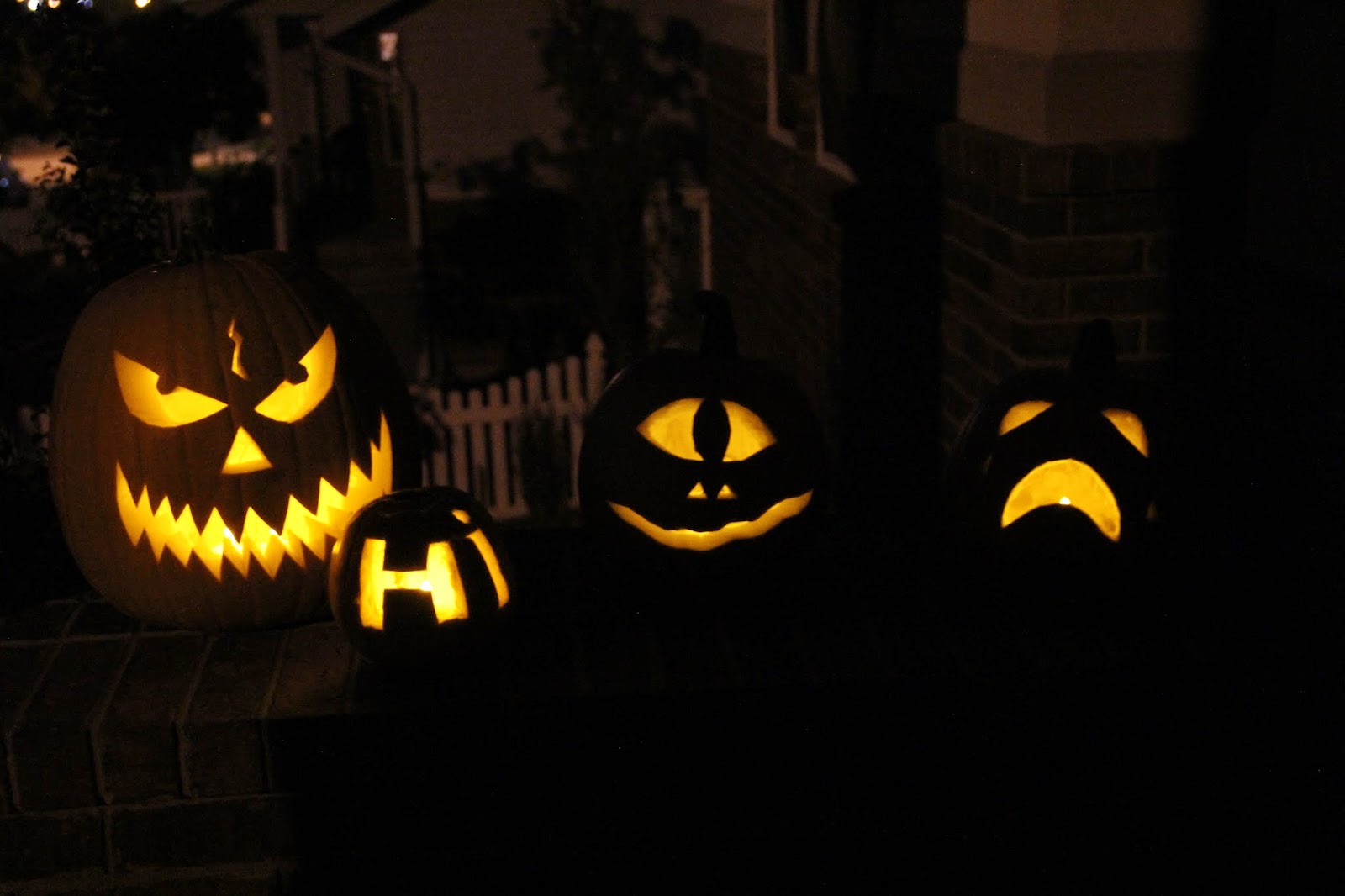 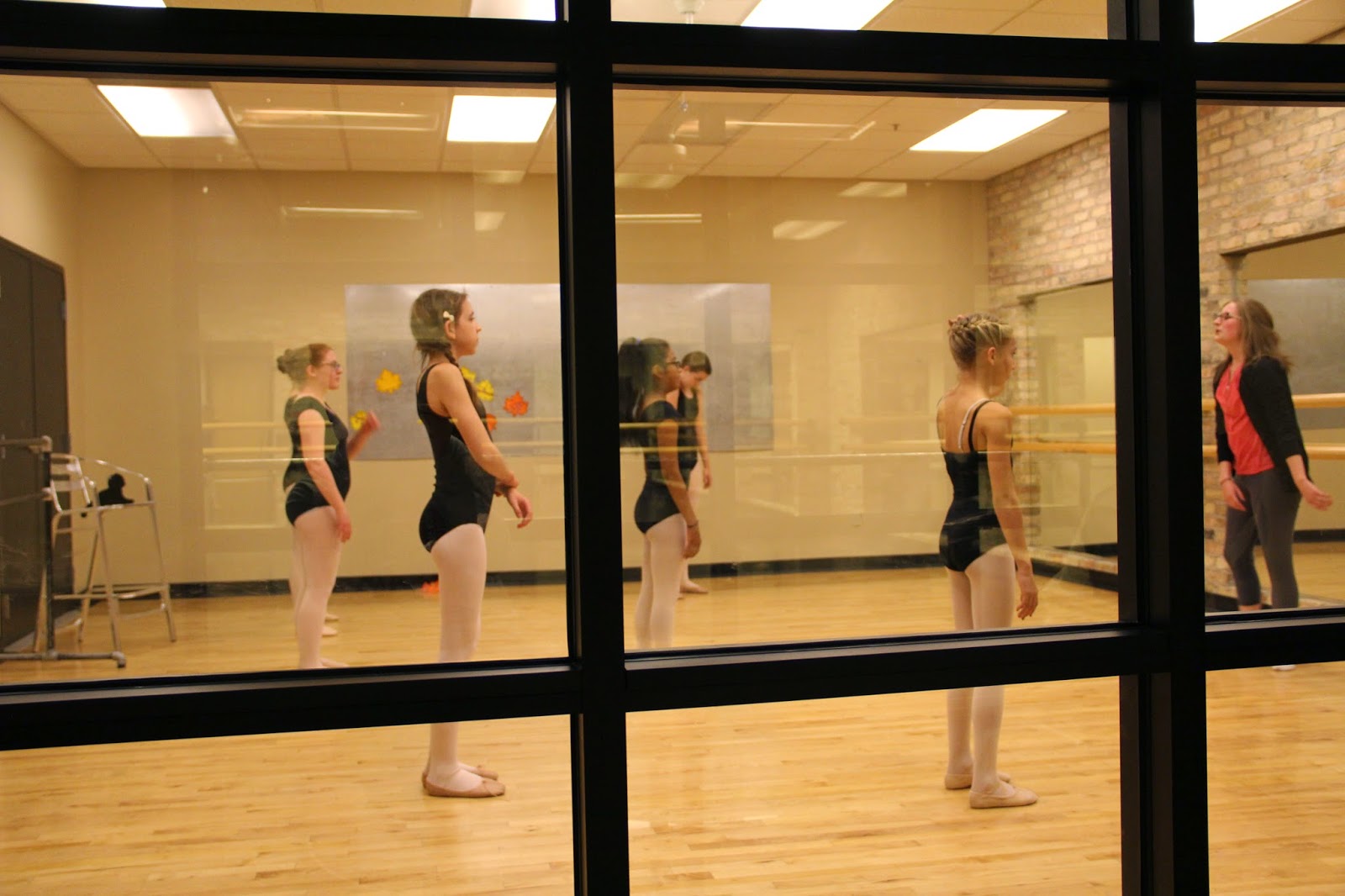 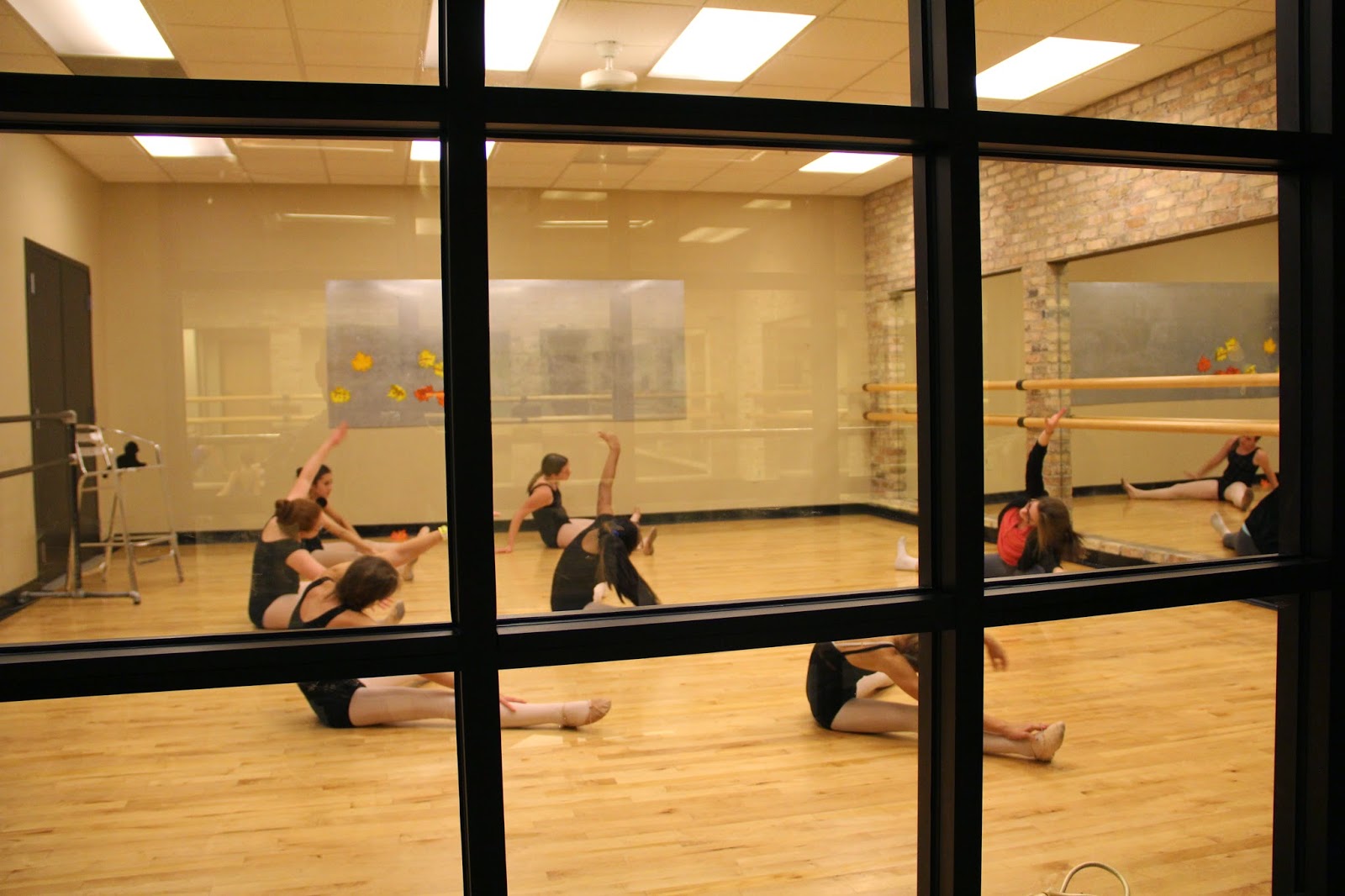 Sarah continues to love going to her Tuesday night beginning ballet class (in north Orem). This Tuesday she drove our Subaru (with a mostly calm me riding shot gun) both ways--freeway out, city streets back. She is almost ready to take her drivers test. Left turns on busy streets are her only real remaining concern. 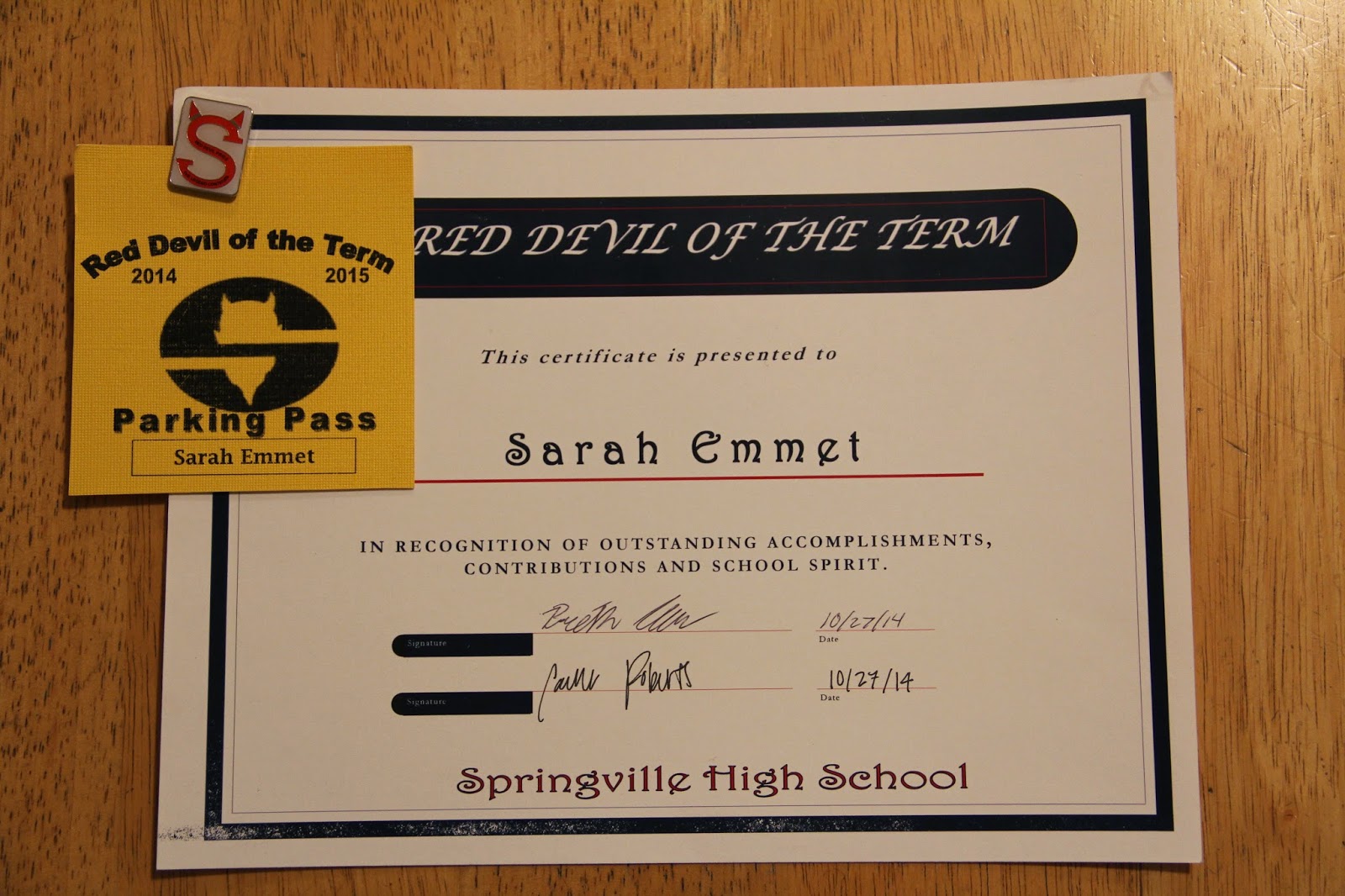 Tuesday Sarah came home from school and informed us that she had been one of six students honored in the assembly that day with the Red Devil of the Term award. Pretty impressive. They started out by stating that this student excelled in drama and seminary but it was when they announced that "her fiery red hair matched her passion for learning" that Sarah knew that her name was next to be announced. The award came with a free school parking pass. Too bad she won't get to use it since Semester at Sea will prevent her from getting her license until next summer. 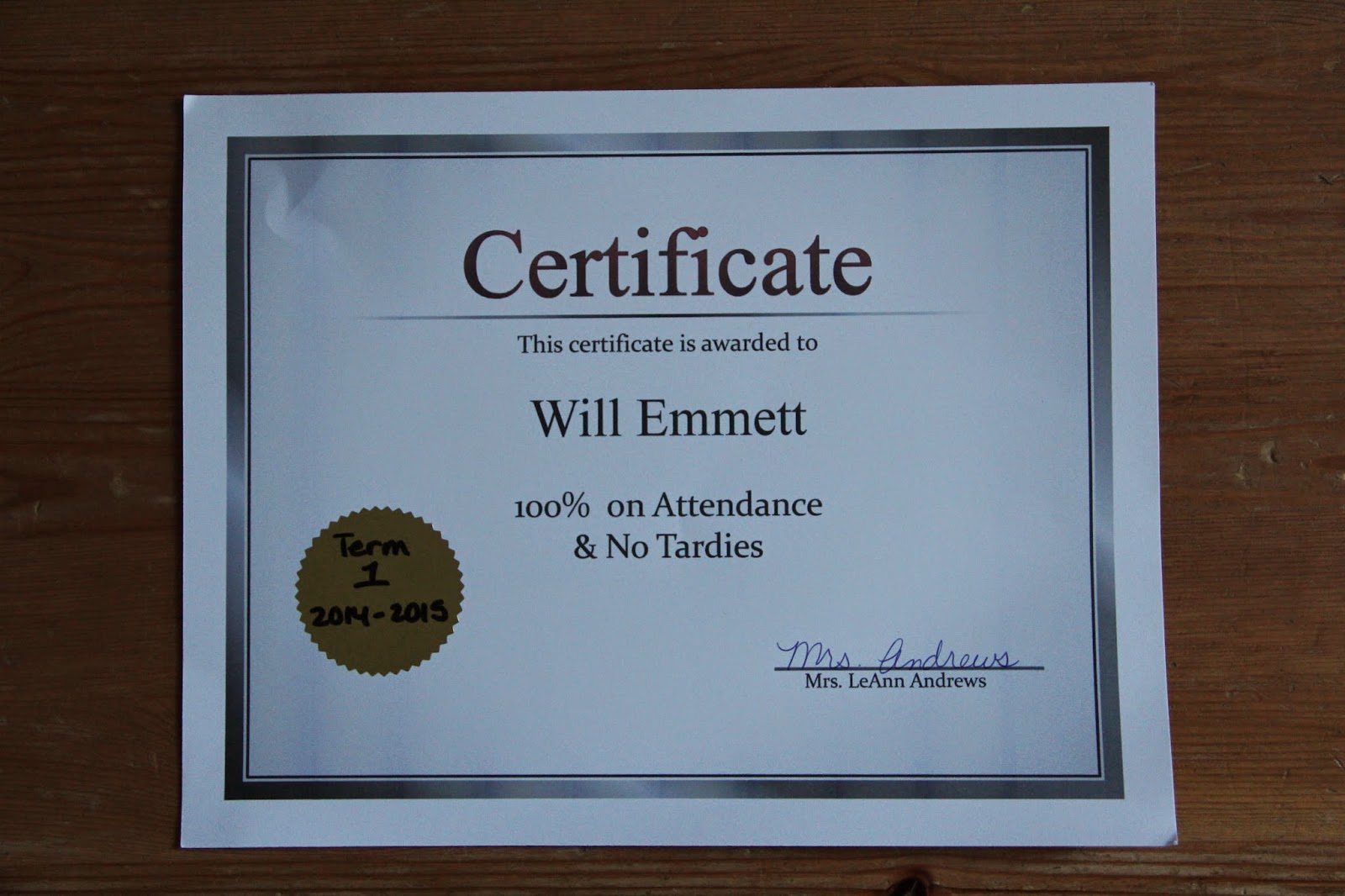 Next day, Will came home with this 100% attendence award. Glad he got it this year because next year we may have to skip a few days for skiing. 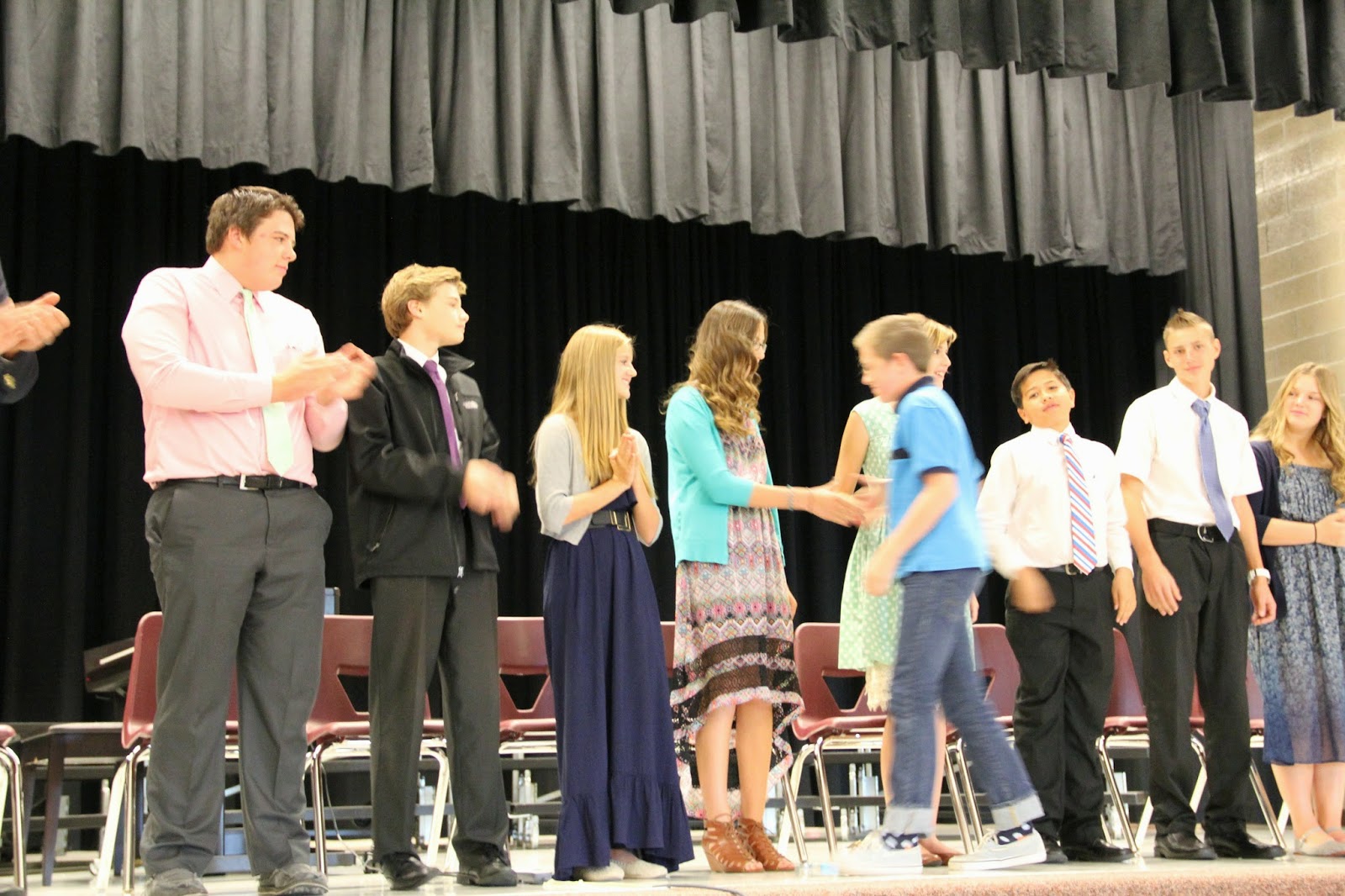 Today, Joel was honored in his school assembly (parents received a letter last week inviting us to come, Joel found out right before the assembly when he was called out of class early) with the Super Knight Award (a Knight is the school mascot) --given each month to two students from each grade who exemplify "the highest qualities of students that seek to be effective communicators, responsible citizens, and successful learners." The bio read by the principal and written by his teachers (who nominate and choose the Super Knights) talked about Joel being a good student, being friendly, and having a good sense of humor. Fortunately his math teacher didn't mention how much socializing and visiting he did in her class. Here he is shaking the hands of the student council and then the administrators. 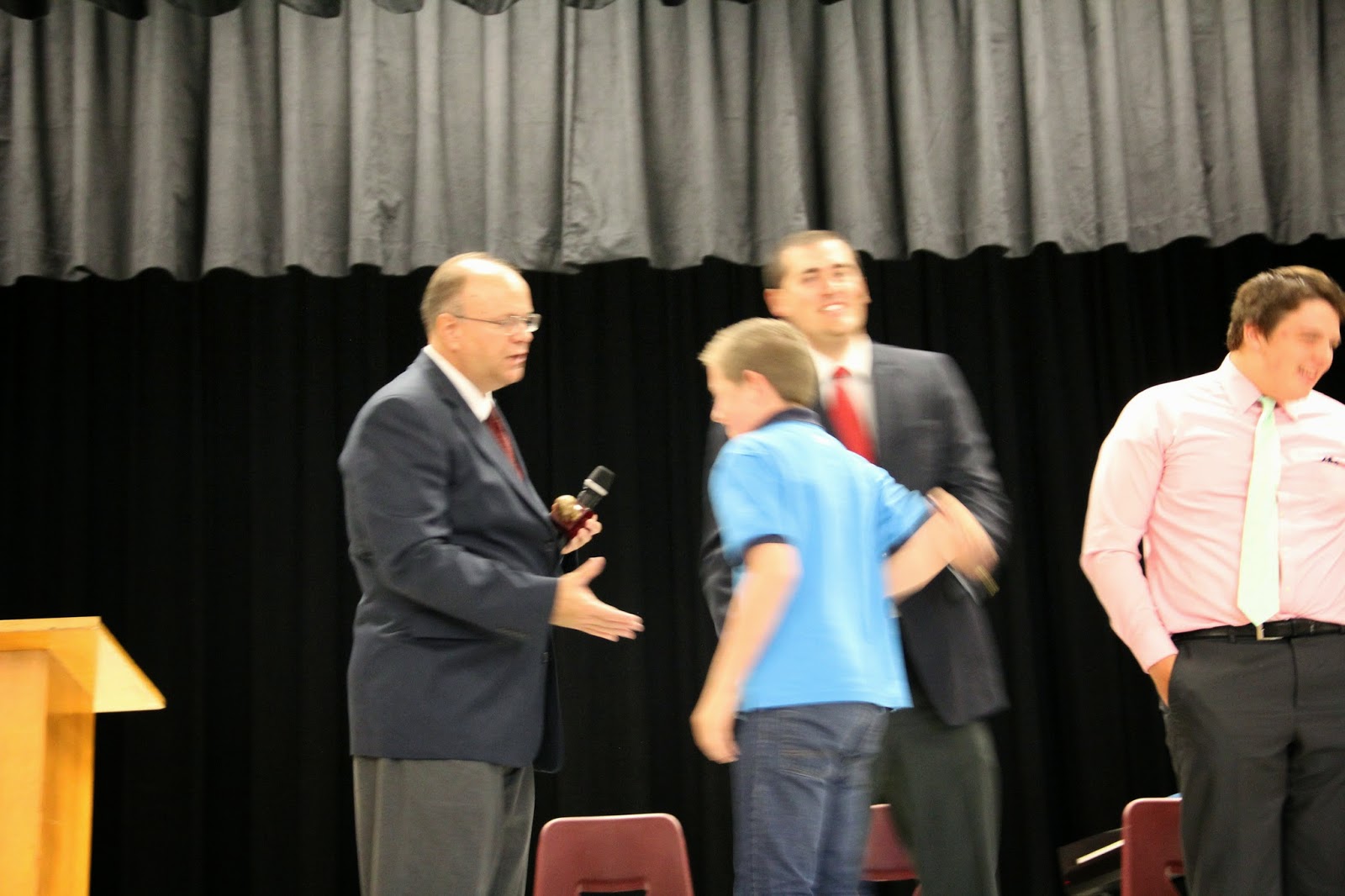 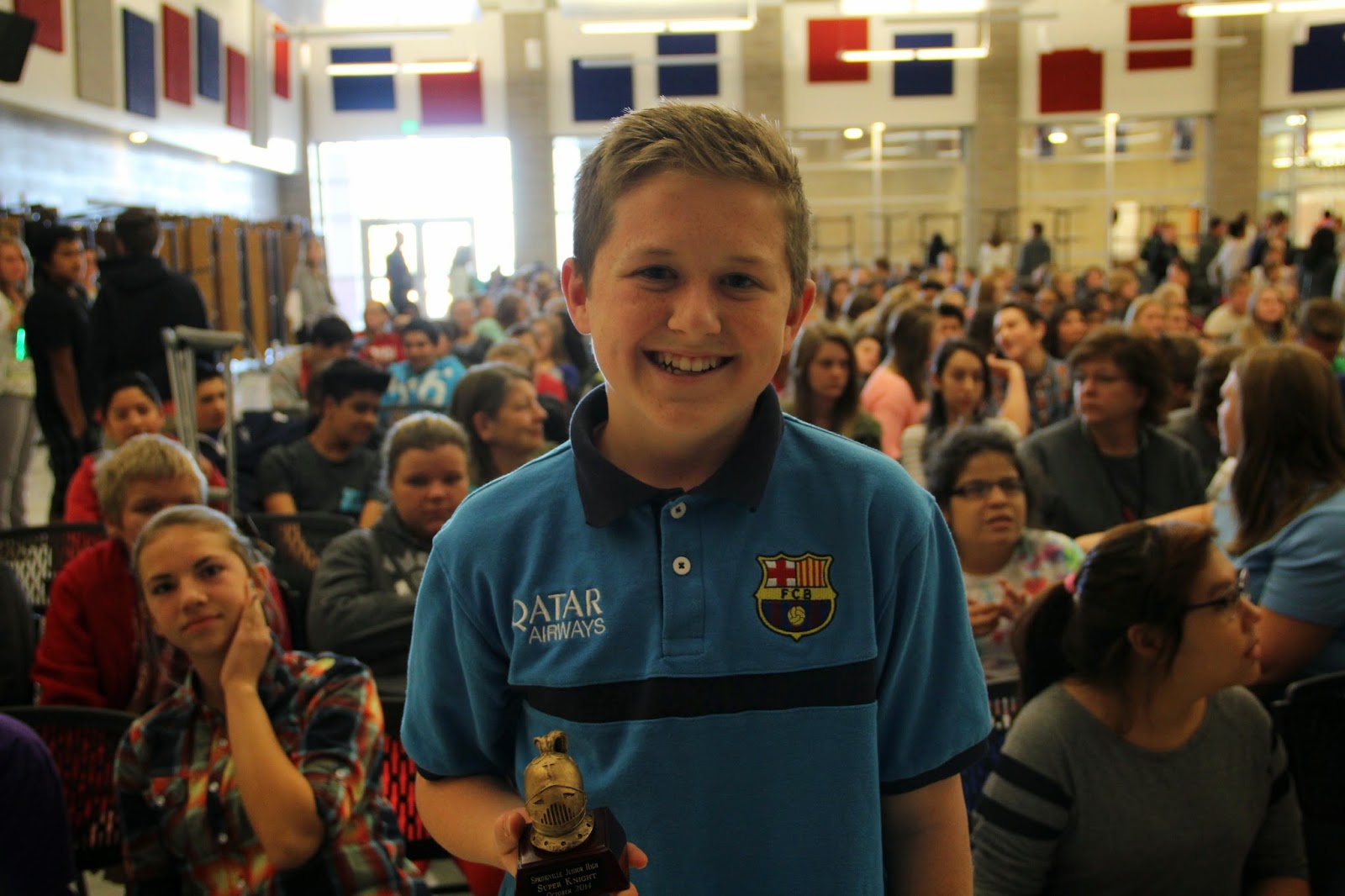 In the cafetorium (its real name) of the brand new Springville Jr. High School.  There is no formal auditorium for assemblies, concerts and musicals--just the cafeteria with a stage. Surprisingly, the folding chairs were very comfortable. The Barcelona Shirt was one of several soccer shirts and jerseys that I bought for Joel and Will at outlet stores in Indonesia. 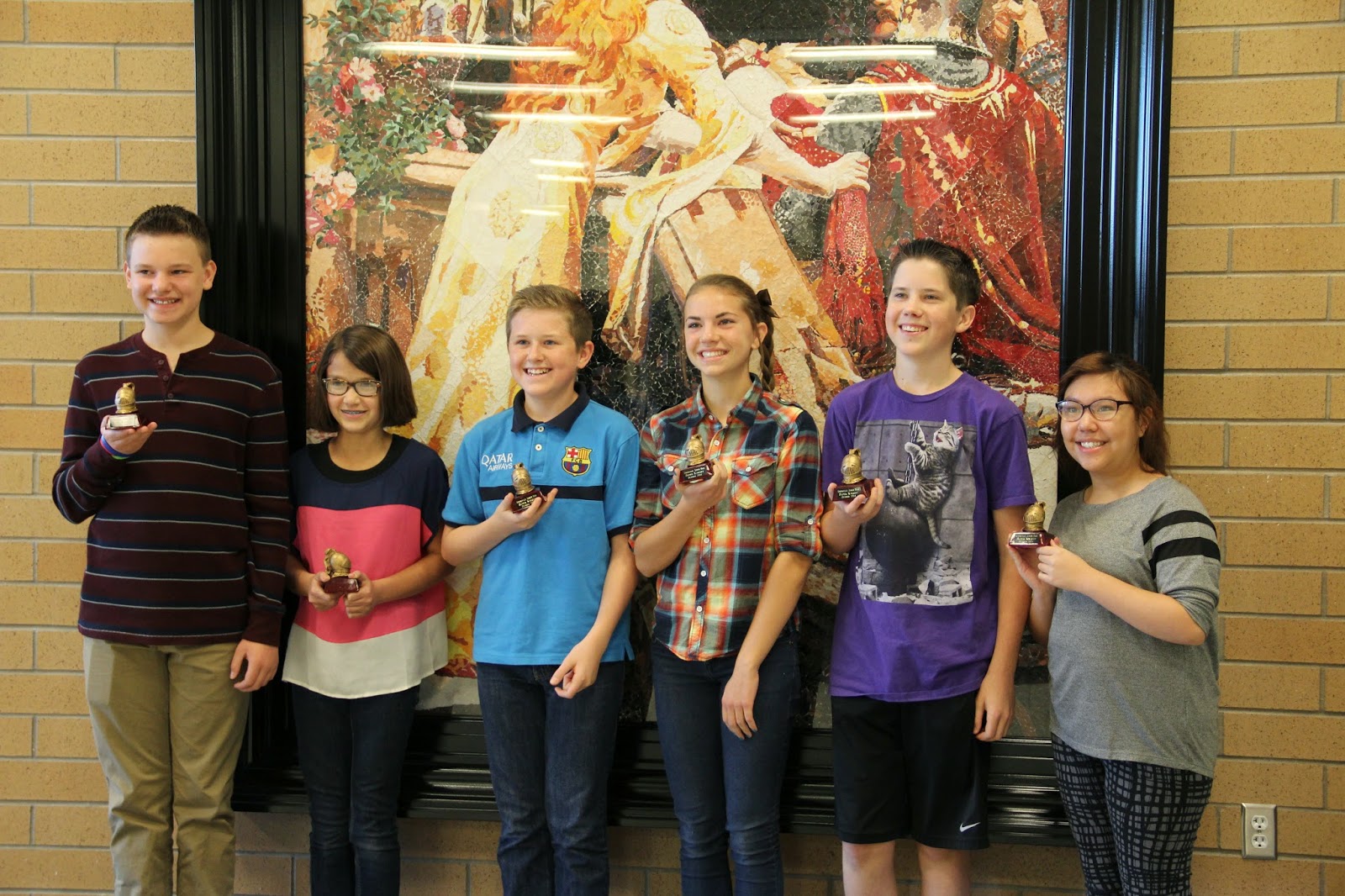 The six Super Knights. Tall seventh grade Andrew on the left lives across the street and is in the car pool with eighth grade Joel.
Posted by chad at 10:34 PM