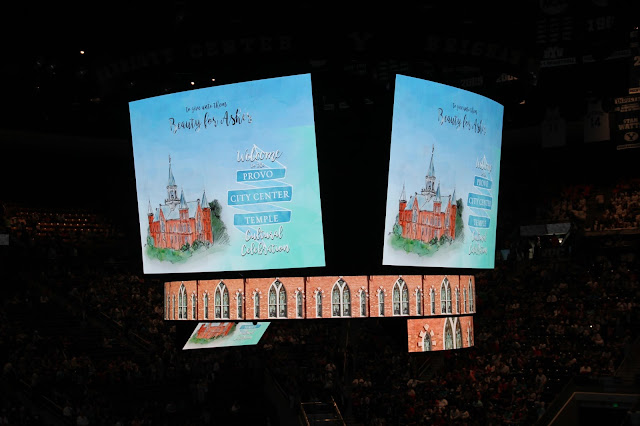 Prior to the dedication of a new LDS Temple, youth from the temple district participate in a cultural celebration. I believe the origin of this practice developed decades ago as a way to entertain visiting general authorities (to usually far off and foreign lands) on the day before the more formal dedication service. The idea was to highlight local culture and history through dance and song. It was also a nice way to get the youth of the area excited about the temple and to be intimately involved in an extravaganza. 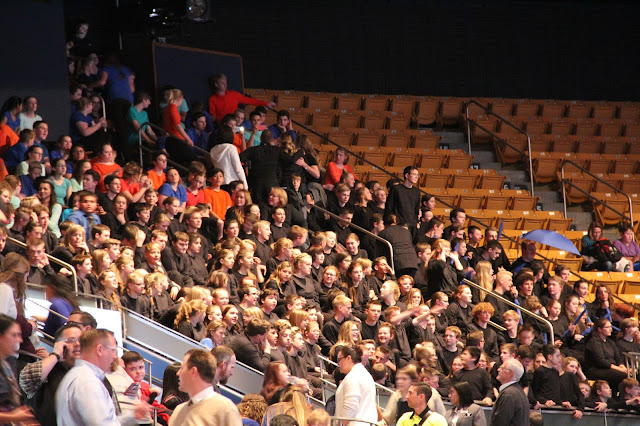 The black clothed youth of the Springville Spring Creek Stake waiting for the show to start. Sarah is in the center of the photo looking right at the camera and Joel, with turned head, is in the lower right just below red-headed Jackson with the Afro.

The Provo City Center Temple district covers 16 stakes in South Provo and all of Springville. The youth from each stake performed one number. This performance involved over two months of twice a week practices--one on Mutual night and one on Saturday morning. It also involved chaperoning youth leaders, choreographers, narration writing, vignette videoing, recording of dance songs sung by local youth, preparing costumes and props etc. All done by volunteers. Truth be told, the practice part was not always that enjoyable. At times it was down right frustrating for the two participating youth from our home.

The 5,000 participating youth (ages 12-18) spent all day Saturday March 19th in the BYU Marriott Center rehearsing. They each took one zip lock bag with food and diversionary entertainment for the whole day. That night at 7:00 they performed. 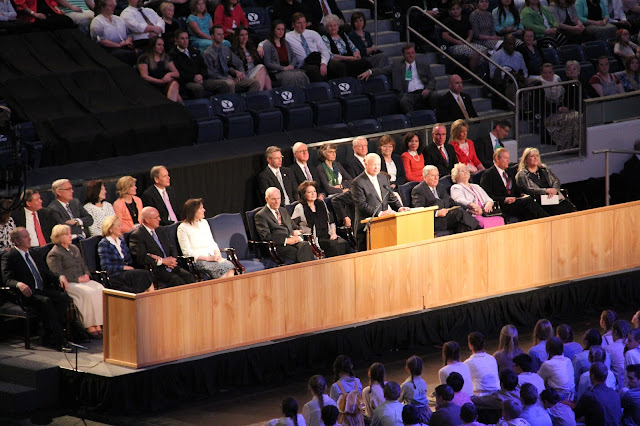 For months part of the excitement for the youth was that the were always told that they would probably be performing for the Prophet and other general authorities and church leaders. Surprisingly no member of the First Presidency attended. The presiding authority was Russell M. Nelson--President of the Quorum of the Twelve Apostles. 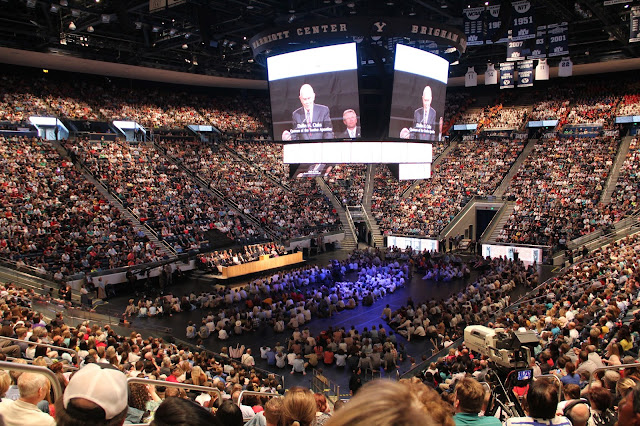 Apostle Dallin H. Oaks, a former president of BYU, welcomed everyone and briefly reminisced about all of the varied events that have taken place in the Marriott Center. The Cultual Celebration was a first. 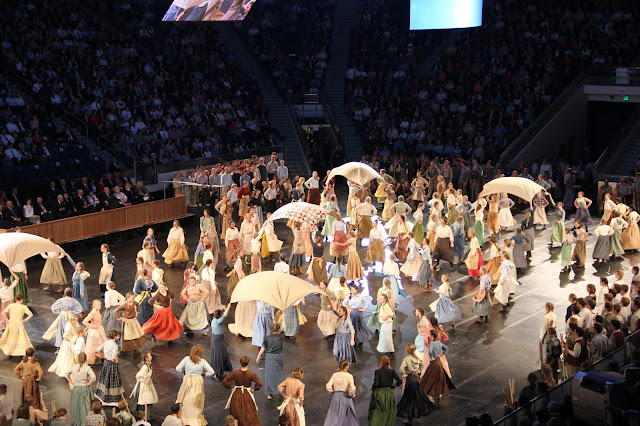 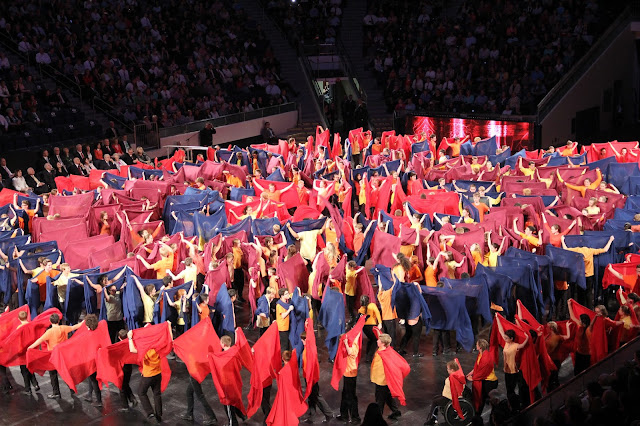 Dancing (with nods to an Israeli hora) to "Through Heaven's Eyes" from the Prince of Egypt. Which illustrated the beauty and workmanship of the original Provo Tabernacle. 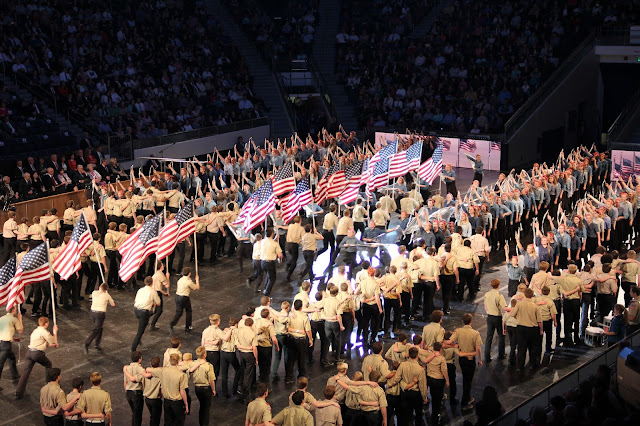 In honor of the many patriotic programs held in the tabernacle over the years, the boys danced to "When Johnny Comes Marching Home" while the girls (dressed as Rosie the Riveter) countered with "Keep the Home Fires Burning."

Dancing to the song Glorious: as a followup to the narration about all the famous people who performed/spoke in the Tabernacle--John Philips Sousa, Helen Keller, Robert Frost, Rachmaninoff, President Taft.

A crowd (and youth) favorite were the boys of three stakes jiving and hip-hopping to a modern-day version of a favorite Primary song--Give said the little stream. The song highlighted that the tabernacle was a place where givers give--they give concerts and speeches, are graduated, are instructed etc. 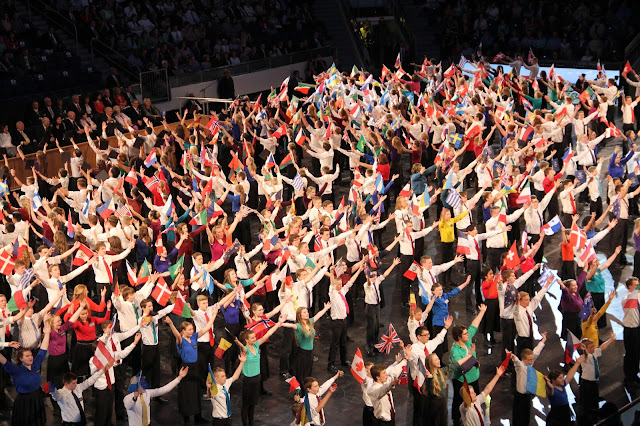 Missionaries "Called to Serve" who over the years were trained and taught in Stake Conferences and other church meetings in the Tabernacle. 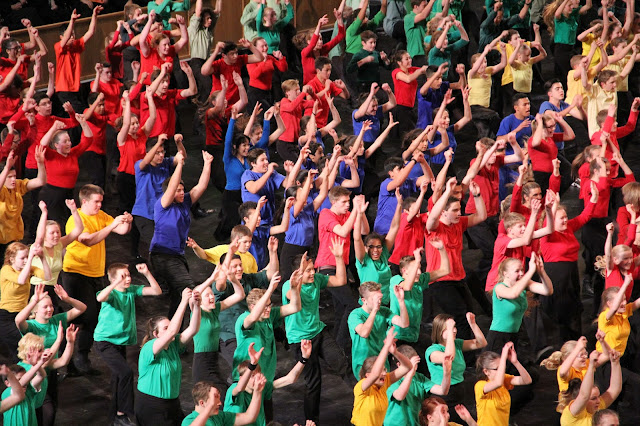 An energetic jitter bug to "Sing, Sing, Sing" noted the fun performances and community gatherings in the Tabernacle.

After highlighting the rich history of the Tabernacle, the chronological program then turned to the devastating fire the gutted the tabernacle. The youth from our stake then danced to a song about how the Lord lets it rain sometimes, but in the end growth and grace comes. It was very nice. 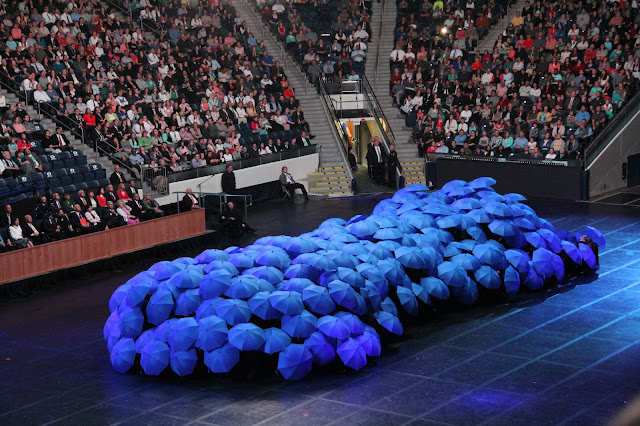 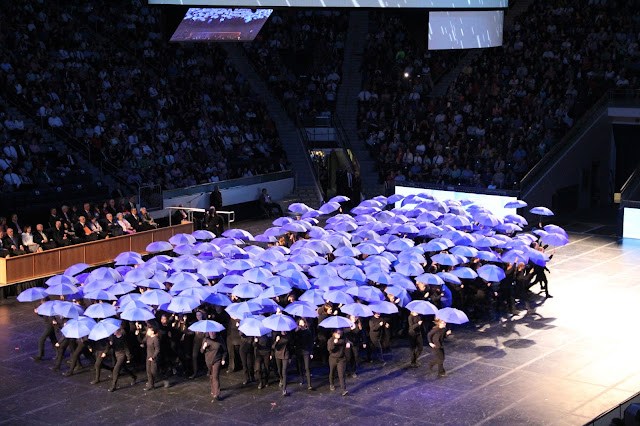 Sometimes He lets it rain

Watch the boys of the Spring Creek 18th Ward (including Joel) in the opening part of the dance.

Watch all of the youth or our stake--with a focus on our ward in the corner. Watch for Sarah.

Here is another view of the performance from neighbor/scout leader Barrett Raymond.

One of the more touching vignettes as part of the narration was the account given by a fellow stake member (we connected years ago when we were both dealing with cancer) who was undergoing chemo at the time of the fire. She likened her body being ravaged by chemo inside her to the burnt out shell of the tabernacle slowly being restored into a temple. Both have now emerged brighter and better. 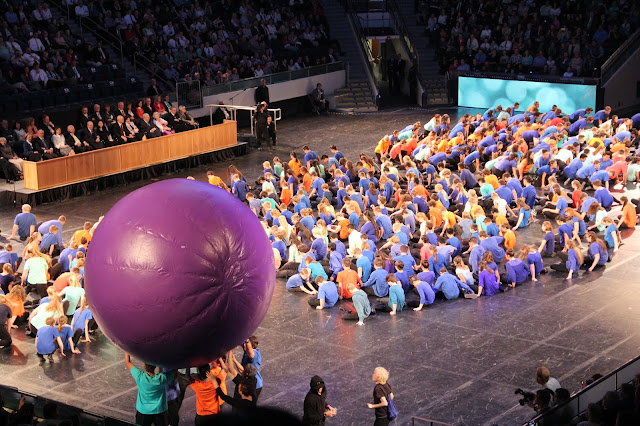 Life and the Kingdom of God roll on. The final song was "Savior Redeemer of my Soul" which focused on the purpose of the soon to be dedicated Temple. 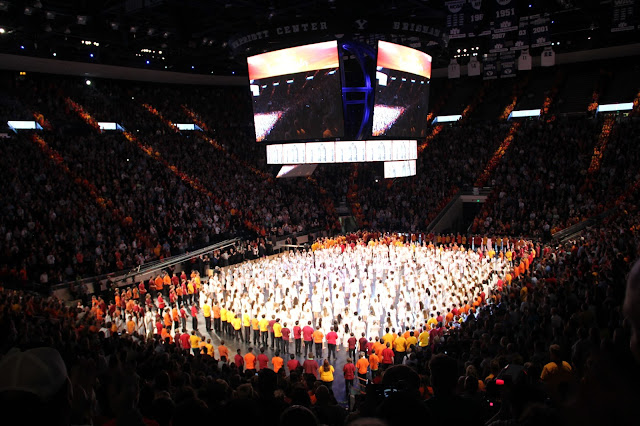 Grand Finale: A song about "Beauty for Ashes" Isaiah 61:3. The imagery was that of a fire, sunset, or sun with extending rays (what I thought). No concluding rainbow like in the Payson Temple cultural celebration.

Isaiah 61:3 To appoint unto them that mourn in Zion, to give unto them beauty for ashes, the oil of joy for mourning, the garment of praise for the spirit of heaviness; that they might be called trees of righteousness, the planting of the Lord, that he might be glorified. 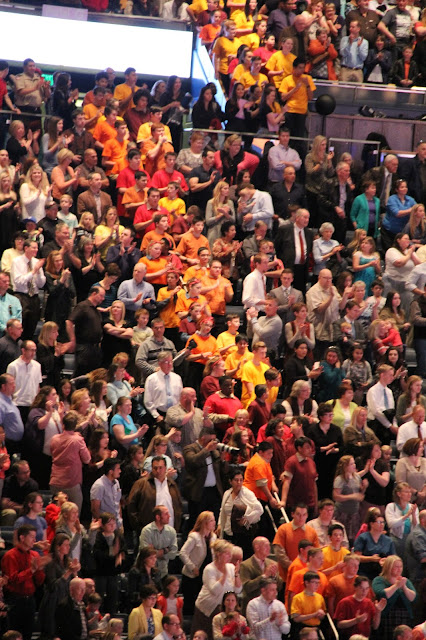 Every aisle was filled with red, orange and yellow t-shirted youth. 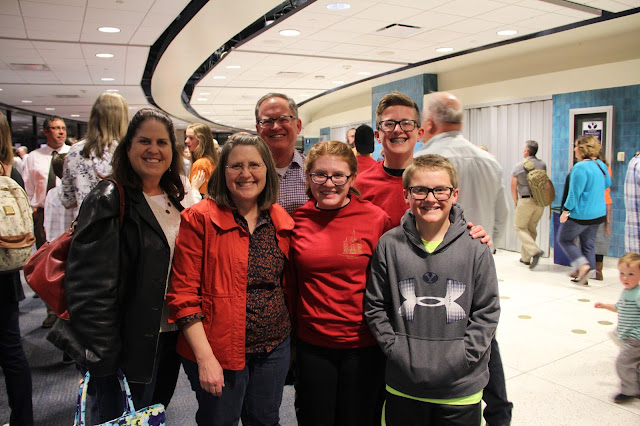 Happy to have watched and participated in such an enjoyable, uplifting event and happy to have it over.
Posted by chad at 11:57 PM