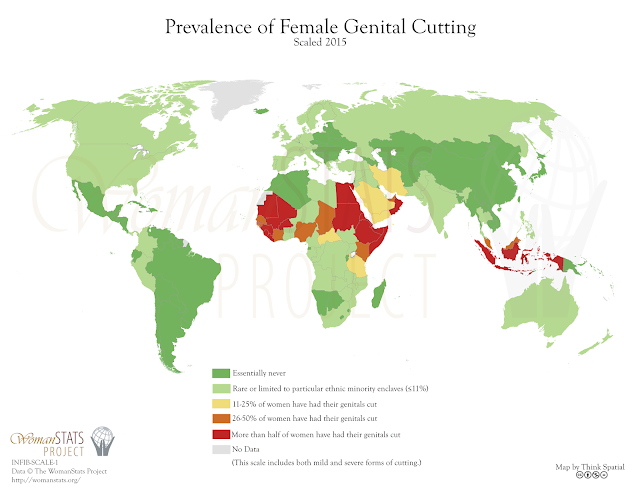 Last month an article I wrote about female genital mutilation (aka as female genital cutting or female circumcision) and Mormons was published in an on-line journal called Square Two which deals with "faithful LDS thought on contemporary issues." You can read that article here: http://squaretwo.org/Sq2ArticleEmmettLDSFGM.html

The gist of the article is that there is evidence of the mildest form of FGM (stage IV)--pricking of the clitoris--being practiced on some LDS girls in Indonesia. The question then arises that if it happens among LDS girls in Indonesia might it then happen among Mormons in Africa where FGM is also commonly practiced among all religious groups--including Christians. I was unable to confirm if FGM has been practiced among Mormons in Africa so there is more research that needs to be done. What I did find out is that many other Christian Churches with congregations in Africa have spoken out against FGM. Within the Mormon Church I was able to find examples of Church leaders condemning cultural practices from Africa, like paying a bride price (lobola) or spending exorbitant amounts on funerals and weddings, but nothing about FGM. In fact I have not yet found any official mention of FGM by Mormon leaders (in conference talks, Ensign articles, the Handbook of Instructions, letters from the first presidency).

In the conclusion of the article I made these recommendations:

"Since FGM/C has been practiced among Mormons in Indonesia and might be practiced in Africa, it makes sense to consider ways to make sure that Latter-day Saints understand that this is not part of the gospel culture.Possible actions to be taken might include: 1) seeking out information from local Relief Society and Young Women leaders (in Africa, Indonesia and in any country where there are immigrant communities who come from areas where FGM/C is practiced) as to whether or not FGM/C is practiced by women and girls in their ward/branch; 2) determining the severity of this cutting and then deciding if all forms of FGM/C are not in keeping with the gospel cultures or if the ceremonial prick of Stage IV as practiced in Indonesia is acceptable: 3) suggesting other coming of age activities/ceremonies that are in concert with the gospel culture, if a ceremonial prick is considered unacceptable. Additionally, even if FGM/C is found not to be practiced among Mormons, the LDS Church should still join the chorus of other Christian churches in openly condemning this harmful practice."

Since the publication of the article two positive developments have come to my attention. 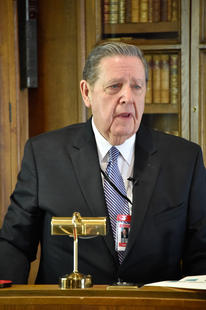 In a September 11, 2016 address (minute 3:41) at Windsor Castle, Elder Jeffery R. Holland, an apostle in the LDS Church, spoke out against FGM (perhaps the first mention of this practice by a church leader) as one of many forms of violence against women.

He said: “Unfortunately violence toward women is not limited to times of war. Instances of female genital mutilation, removal of bodily appendages, and honor killings persist during times of peace….Surely God knows of their suffering and weeps with them. As Isaiah [22:4] lamented: Therefore said I, Look away from me; I will weep bitterly, labour not to comfort me, because of the spoiling of the daughter of my people.”

He said: "Unfortunately, violence toward women is not limited to times of war. Instances of female genital mutilation, removal of bodily appendages, and honor killings persist during times of 'peace.'.... Surely God knows of their suffering and weeps with them. As Isaiah lamented, 'Therefore said I, Look away from me; I will weep bitterly, labour not to comfort me, because of the spoiling of the daughter of my people.'"

Sadly, this important statement was included at the first of a speech that mainly focused on two other important and current issues--helping refugees and religious persecution, both of which have received considerable attention over the past year by Church leaders. Unfortunately this ground breaking statement about FGM did not get mentioned in either of the main Church produced articles about the speech including a Church News article (image below) that briefly mentioned women's issues including "sexual violence against women," but did not include mention of specifics like FGM, and an article in the Deseret News that mentioned "sexual violence" against women: http://www.deseretnews.com/article/865662516/At-Windsor-Castle-Elder-Holland-joins-international-leaders-in-talks-on-religious-persecution.html) 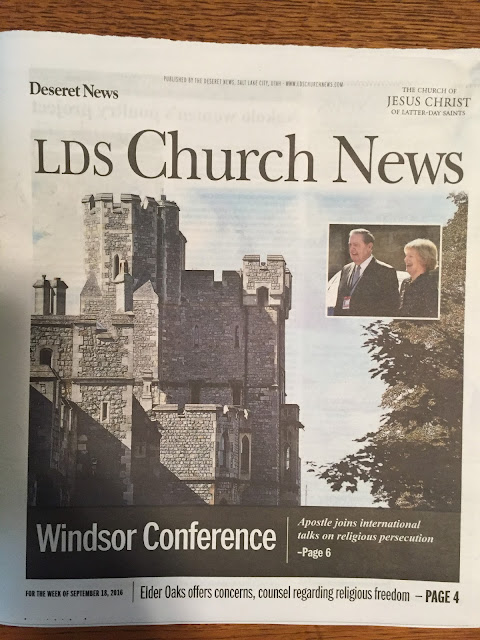 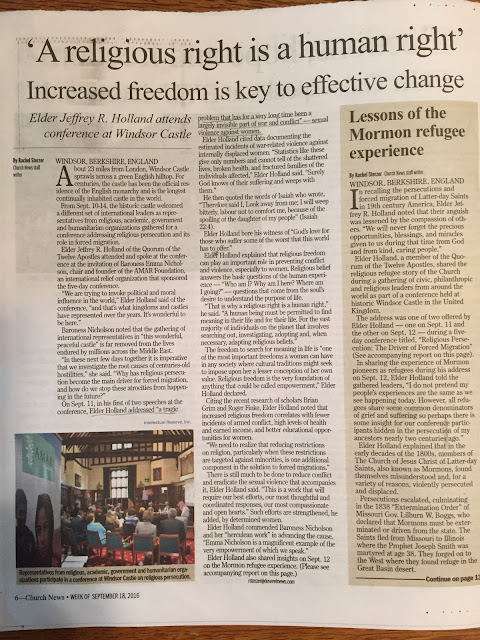 Last week I was contacted by a staff member of US Senator Harry Reid (a Mormon and a Democrat) from Nevada. From this staff member, who had some questions about my article, I learned that for over two decades Reid has been at the forefront of US government efforts to curtail the practice of FGM. He first learned of FGM in 1994 and was the author of the 1996 law banning FGM in the US for girls under 18. He also sponsored the Girls’ Protection Act, which banned vacation cutting. This law passed as part of the fiscal year 2013 National Defense Authorization Act.  He also initiated two broad and comprehensive reports from the Government Accountability Office (GAO), which were just released, looking into how the US is addressing FGM. http://www.gao.gov/assets/680/676833.pdf. http://www.gao.gov/assets/680/678098.pdf. 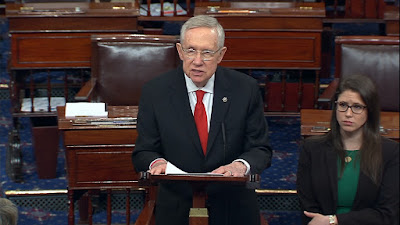 I applaud the long time efforts of Senator Reid and hope that the speech by Elder Holland might be the beginning of Church efforts to help stop the horrible practice of FGM.

Happily included in the Handbook was this entry:

I look forward to seeing how this new policy is disseminated and taught to members of the church in areas of the world where FGM is still a cultural practice.
UPDATE (7-31-2020)
Today the Church issued a statement indicating more changes in the handbook of instructions. https://newsroom.churchofjesuschrist.org/article/handbook-update-july-2020?lang=eng&cid=email-OCA_HandbookUpdate_072420_CTA  Included in those changes were several updates to the section on Moral Issues on such topics as sperm and egg donation, fertility issues and birth control. There was also a change to the statement on FGM, now there is no indication of further policy direction which leaves it unclear as to whether the ceremonial prick of Type IV is equally condemned along side the full removal of female genitalia found in Type I-III. As far as I can tell, the Church has yet to offer any public announcement, discourse or publication about the ban on FGM. 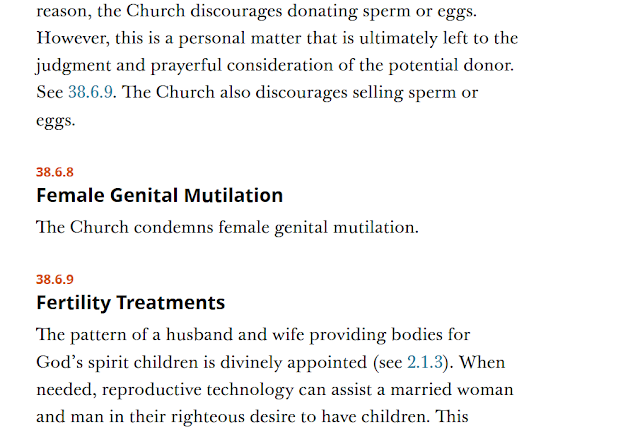 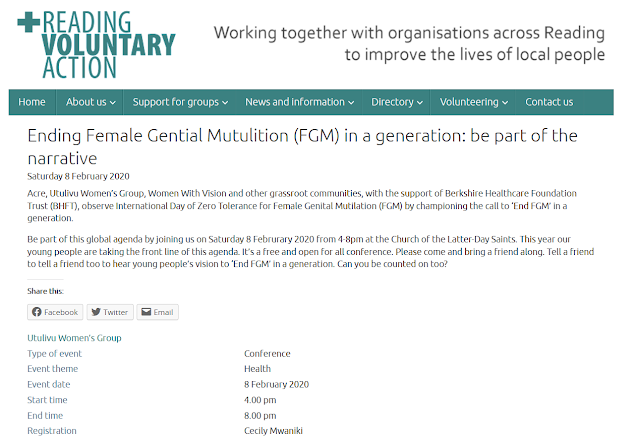 Nice to see a local LDS chapel in Reading England being used for a Conference calling for the end of FGM.   https://rva.org.uk/event/ending-female-gential-mutulition-fgm-in-a-generation-be-part-of-the-narrative/
Posted by chad at 10:06 PM