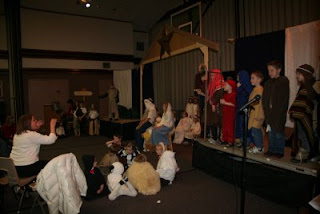 This morning we had our annual ward Christmas breakfast. This year the primary volunteered to join its quarterly activity with the breakfast so we were all treated to a wonderful nativity pageant complete with Samuel in Zarahemla and shepherds in Bethlehem. Marie was in charge of the music. It was great. She had all 16 of the activity day girls over to our house last Tuesday for a rehearsal. They made quite an angel choir! 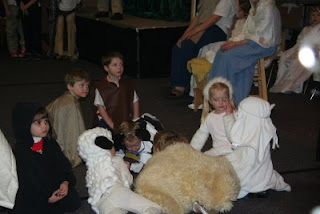 The Sunbeams were the stable animals. Will was to be a sheep (with a real fleece from Aunt Jan like the other one in the photo), but when his friend Trevin refused to participate unless he could be a horse, I gave him a brown tunic to be a horse and then that was all willful Will wanted to be so he got a recycled star wars tunic and the two of them were happy horses. The two horses and the black and white cow (Jackson) started to buck during the final singing of Silent Night. As the cow was kicking up his back legs, his front arms failed to hold him up so he collapsed down on his face which gave him a bloody nose. He started to wail. Luckily his mother was quick to scoop him up and take him out. 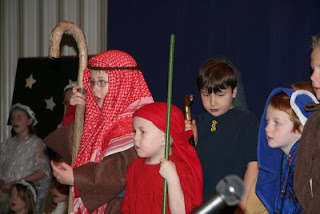 Joel was the best singer and best out-fitted of all the shepherds. Notice the crook I fashioned out of a shovel handle, a curverd spare dryer part and some brown bag strips. 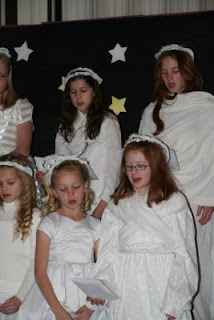 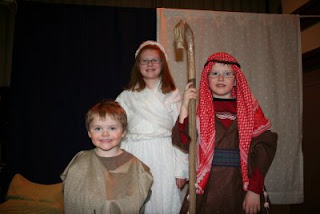 The angel, the shepherd and the manger horse.
Posted by chad at 10:07 PM