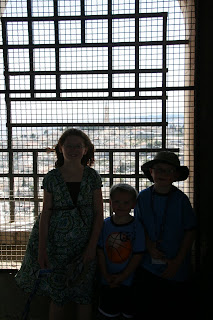 On Saturday we attended 10:00 Sabbath services of the Jerusalem branch. The branch is made up of Jerusalem center faculty (four), JC service couples (three), the BYU students (they all left last week, but instead the branch welcomed 40 or so BYU intensive Arabic students who have spent the summer in Amman Jordan--they were recruited to give the talks, sing in the choir and provide a special musical number), four US consulate families, some Filipina domestics, a few graduate students at Hebrew University, and a few locals. There are about 15 children in the primary. Sarah, Joel and Will all commented afterward that they met some new friends in Primary. After church we walked over to Augusta Victoria to see where Will will go to pre-school and to climb the tower. It closed at 1:00, but one of the staff at the hospital pointed us to another entry that led us to the tower stairs. We climbed to the top for a great view down to the Dead Sea and out across Jerusalem. We enjoyed a good Turkey dinner in the Oasis. New faculty were allowed to eat in the Oasis for the first few days while we got our feet on the ground and while the intensive Arabic students were here using the cafeteria. The students left last night so the Oasis is now closed for a week and so now we will be cooking all of our meals.

For our Sunday adventure the Emmetts and the Manscills (the other religion professor here with his wife and youngest son age 15) went to Aladdin the money changer on Saladin street to get some shekels. We used this money changer back in 1982 when I was a BYU Jerusalem student. He will cash any check written by BYU faculty and students because he knows it will be good. As we walked in the door he knew us as somebody from BYU. We then drove down the bab al-wad to the coast. Half way there we stopped to fill up the BYU van with gas. In Israel cars can be equipped with an automatic credit card charger so all you need to do is fill up the gas and go, the charge is then automatically deducted from a JC account. The gas attendant asked me how I wanted to pay. I didn't know how to explain this automatic payment thing. I did my best and soon he said "oh, paz-o-matic"--Paz being the name of the gas station chain. When I confirmed that that must be how we were paying he then asked if I was Mormon. I guess a lot of other Mormon University personal have stopped at this Paz station and used the paz-o-matic. We then proceeded to Nitsanim Beach on the Mediterranean Sea half way between Ashdod and Ashkelon. It was a great outing. The water was a perfect temperature and the sand soft and fine (great for making sand drip towers). It was also much less crowed than the beaches of Tel Aviv. I forgot my swim suit and improvised by swimming in my pants. I remembered this beach from 1982. Then and today I loved standing shoulder deep just beyond the breaking point of the waves and bobbing up and down with the waves. The kids loved jumping over the waves and building sand castles. There were large awnings spread along the beach which provided a nice respite from the sun and a good place to eat our lunch. After four hours of fun we headed home via a stop at McDonald's for an ice cream cone.

After a spaghetti dinner, I gave each of the children a father's blessing prior to beginning school tomorrow. Among other things I blessed Sarah that she would be able to find her classes. The Anglican school meets in an old hospital with five separate two-story buildings. As a sixth grader Sarah is in Middle School and so has to go from class to class. After the blessing she thanked me for the part about not getting lost since that was one of her main worries. Today was a nice day. 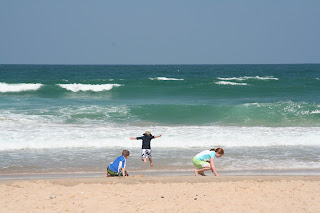