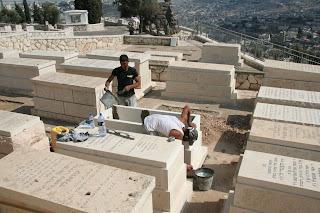 The kids get out of school early on Fridays so we took advantage of some free time in the afternoon to explore the Mount of Olives. We started out at the over-look in front of the Seven Arches Hotel (where G & G Emmett have stayed before back when it was the inter-continental hotel). Souvenir salesman Ibrahim (who knows Carol Mikita from KSL TV and other LDS luminaries) tried to get us to buy a large panoramic photo of Jerusalem but we are not yet in a souvenir buying mood so we declined. He then gave it to us for free, I think hoping we would then give him some money. I tried to give back the poster, but he refused, so if any of you visit Jerusalem and if you want one of the nice posters, please buy it from Ibrahim on the Mount of Olives. Tell him Chad sent you.

I was intrigued with some Arab workmen preparing a new Jewish sepulcher for a burial. 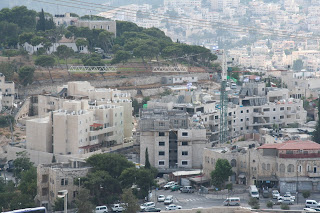 From the Seven Arches viewpoint we could look down on new construction in the Ras al-Amud neighborhood. This settlement has been in the news lately. It is an expansion of a small cluster of Jewish apartments that were established a few years ago. It is in the midst of an Arab neighborhood. Opponents of the settlement/neighborhood see it as strengthening the Jewish presence in Arab East Jerusalem, while Jews see it as a great location close to the Jewish Cemetery on the Mount of Olives and with a great view across the Kidron Valley to the Temple Mount. 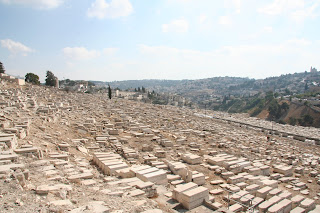 The many "whitened sepulchers' on the Mount of Olives descending down the slope toward the Kidron Valley. The crane for the new construction in Ras al-Amud can be see just beyond the cemetery and the mosque at the upper left of the photo. 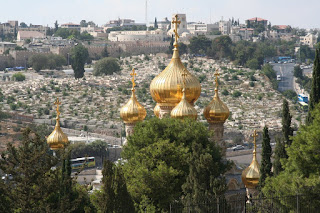 The onion domes of the Russian Orthodox Church of Mary Magdalene. It sits just up the hill from the Basilica of Agony in Gethsemane. This church is only open on Tuesday and Thursday mornings from 10-12. I have never been in it so it is now on my list of places to visit. 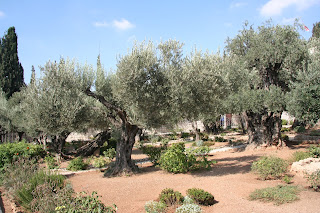 Gethsemane. Some of the trees allegedly date back 2,000 years. One of Joel's goals is to touch old things while we are here. So far he says that the oldest thing he has touched is from 1922, one of Grandpa Emmett's National Geographics. He wanted to touch these trees but they are off limits. He's hoping to touch the Pyramids when we visit Uncle Matt. 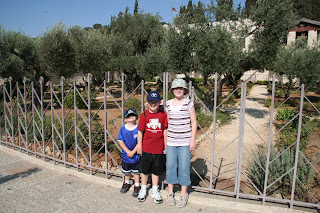 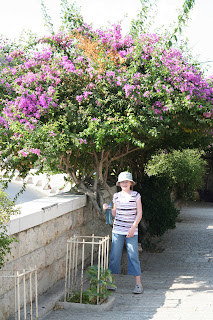 This photo is for Grandma Tueller who Marie remembers as always liking Bougainvillea. 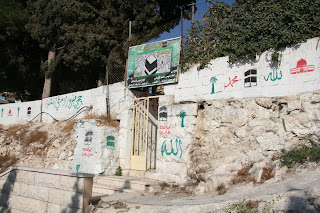 Gethsemane was nearly empty so we had a pleasant visit. We then went over to view the Tomb of Mary Church but it was packed with a bus group--we'll keep that on our list to visit for another day. We then climbed the Mount (Sarah calls it a hill) of Olives via the Orson Hyde Garden back to the Center. As we walked from Orson Hyde Garden to the Jerusalem Center we passed through the Arab neighborhood located just to the south of the Center. This home was commemorating one of its family members having made the pilgrimage to Mecca. Our balcony looks across to the homes in this neighborhood. Muslims are just finishing the first week of Ramadan so every evening we look out on homes decorated with Ramadan lights (just like Christmas lights) and we get to hear firecrackers, kids playing and extra sermons from the call to prayer speakers.

What an amazing city.

Today after church services (I was one of three speakers-my assigned topic was how my studies in the Holy Land have increased my faith in Jesus Christ) we enjoyed a branch pot luck linger longer. Branch members come from such diverse places as the Philippines, Bolivia, Venezuela, Armenia, Italy, and the United States. For our combined fifth Sunday lesson we discussed ways to best fellowship and help members of the branch who have difficulties getting to church meetings from their homes in the West Bank. We came up with many good ideas, but peace would be the best help.
Posted by chad at 11:14 AM