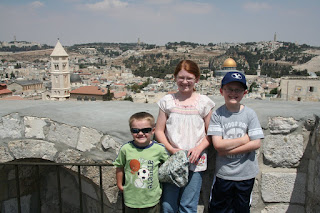 Our excursion for last Sunday afternoon was to the Citadel of David. It sits adjacent to Jaffa Gate and is the site of among other things, Herod's three towered palace, a Crusader Fortress and an Ottoman Citadel. The kids loved the moat, towers, and ramparts. It houses a nice museum on the history of Jerusalem. Sarah was most interested in trying to figure out all of the various empires and kingdoms that have controlled the holy city. It reminded me of my first visit to Jerusalem in 1979 when a tour guide used the outer walls of the tower to illustrate the stone remnants of past civilizations. She pointed to the lowest level which was perhaps Canaanite or Israelite and then proceeded to go up the wall showing stones from the Herodian/Roman Period, Byzantine, Arab, Crusader, and Ottoman periods. I was overwhelmed with the chronology and thought that I would never get it straight. I think Sarah will get it straight pretty soon.

The photo is looking east toward the Temple Mount/Haram al-Sharif with its Dome of the Rock and the Mount of Olives with its "Mormon University"--our home. 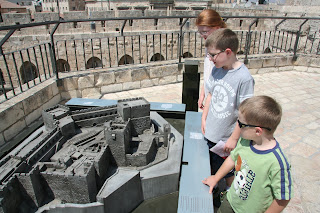 A scale model of the Citadel. Joel and Will both enjoyed listening via phone receiver to the explanation of the history of the place. 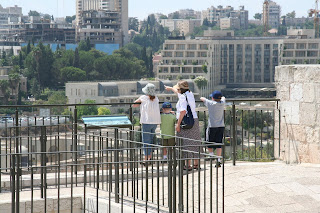 The towers provided excellent views in all directions. Marie is pointing out sites in West Jerusalem 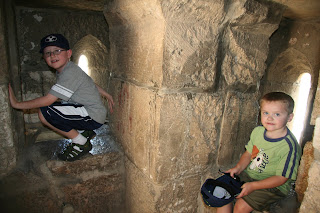 Exploring the towers with their slots for shooting arrows at invading armies. 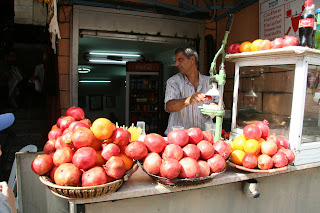 We enjoyed some fresh squeezed pomegranate juice afterward. We then walked throught he old city from Jaffa Gate to Damascus Gate via the Christian quarter. Joel found a BYU Jerusalem shirt he wants to buy. We'll put it on our list. Once again the kids were real troopers and great travelers.

Monday it was back to work and school. It got off to any early start with Will throwing up at about 5:00 AM. It was to be his first day at pre-school, but that was postponed. I left at 8:30 for a two day faculty field trip orientation trip to sites in the Galilee. On Tuesday Will did go to the pre-school at Augusta Victoria. We were hoping this would be a great fit for him, but most of the children are a year or two younger and it leans more to the day care side of things than to a structured learning experience. I got a call on the road home from Ceaserea on Tuesday from a discouraged Marie who announced to me that "the honeymoon was over". Will had a high fever Tuesday night so he did not go to school on Wednesday and then on Thursday he was back to a major throw-up across the whole bathroom floor (sorry about the details, but the primary recipients of this blog are four grandparents who are keeping up with their Jerusalem grand-kids via this blog instead of the normal weekly phone updates). He was quite lethargic most of the week and ended up watching lots of videos on the TV. Thankfully our next door neighbor has a collection of 108 Disney films on DVD (More likely than not they are pirated, but I'm not telling or asking) that she bought last semester in Jordan that we have borrowed to help keep Will entertained and Marie sane . Today Will finally seemed to be back to his normal self. He had enough energy to climb the Augusta Victoria Tower with is dad (on another faculty orientation trip) while his mom went grocery shopping with some of the other women in the center. If they go together they can share car mileage which then allows us to save up miles for weekend excursions. We are allotted 400 free kilometers a month which get eaten up real fast by shopping trips--usually 2-3 a week, trips to the library, etc.

The 82 students arrived on Wednesday afternoon. I went to meet them at the airport and have kept busy ever since with orientation walks, orientation meetings, Old Testament lectures and lecture preparation. It was fun yesterday to walk one of eight groups across the city pointing out some of the sites. Somehow a hand full of olive wood merchants and money changers knew the day, time and route of our walk and were conveniently waiting along the way with business cards to hand out to the students.
Posted by chad at 1:24 PM