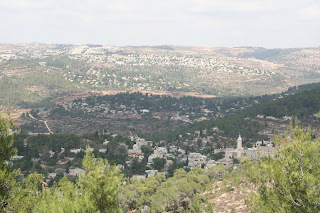 For our Sunday outing today we drove to the west Jerusalem suburb of Ein Kerem. This is the traditional site of John the Baptist's home town. Up until 1948 it was an Arab village on the outskirts of Jerusalem. During the 1948 war the Arabs of the village fled eastward. The village was then populated with Jews who moved into the abandoned homes. Ein Kerem is now known for its many artisans. 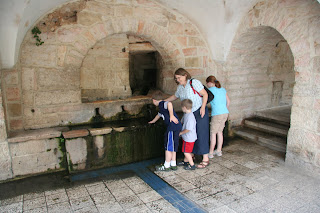 Our first stop was Mary's Spring. Tradition has it that Mary stopped here for a drink as she came to visit Elisabeth. We stopped to wet our hands and Joel took a drink. 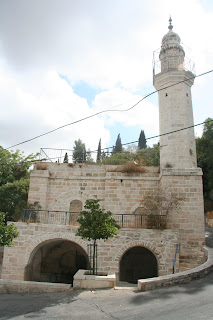 An abandoned mosque rises above the spring. 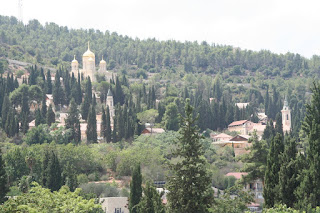 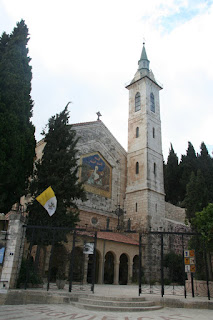 This is a wonderful church and is so far Marie's favorite place. 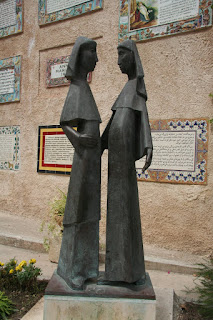 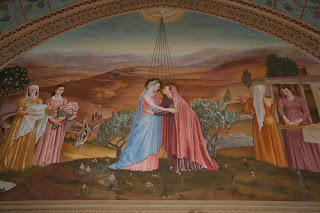 Inside the lower grotto of the church is another depiction of the event. 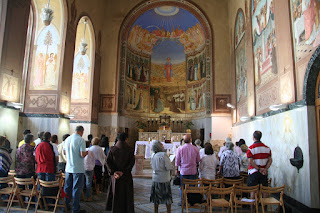 Spanish pilgrims in the upper Chapel 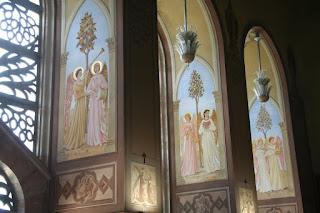 I really liked the window side panels. 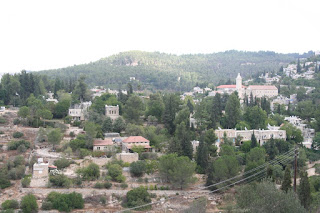 Next stop across the village was the Church of St. John the Baptist. 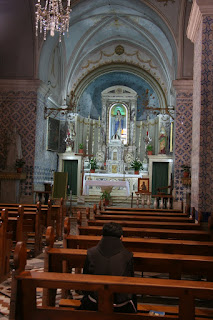 Both of these churches are Franciscan. Here a Franciscan monk studies in the church. 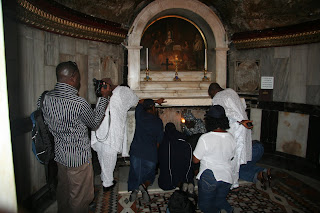 In the lower grotto--the traditional site of his birth--pilgrims from West Africa gathered around the site to sing and pray. The woman facing us climbed right on top of the star marking the spot and led them in worship. 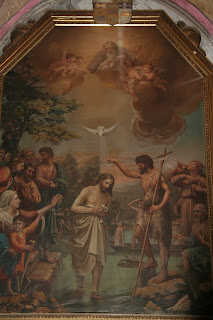 Spanish royalty financed the reconstruction and restoration of this church in 1674. It was built over ruins of Byzantine and Crusader churches. Much of the art work are originals from Spanish artists of that era. Much of the art depicted events from the life of John, 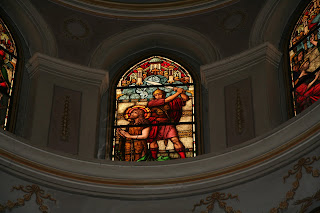 including all of the stained glass panels in the rotunda. This window shows the beheading of John.
We then enjoyed an early birthday lunch for me at the Karma restaurant in the center of Ein Kerem. The kids enjoyed cheese pizza and french fries while Marie and I enjoyed fettoush (a delicious Arab salad) and pumpkin soup. 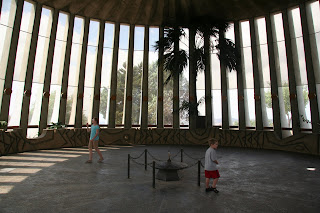 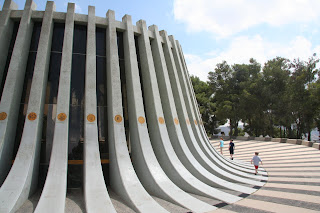 We then drove out to the John F. Kennedy Memorial. It is on a reforested hill top far to the southwest of Jerusalem.

Our final stop was grocery shopping at Jafar's. Sarah pulled a good one she convinced her mom on one aisle to buy three KinderToys (chocolate and a toy) from Europe and then she convinced her dad on another aisle to by some fruit Mentos. It was probably all for the best--eating the mentos on the way home kept the kids (who are not yet used to riding so close together in a sedan back seat) happy. Driving to Jafar's, Will was driving Sarah crazy talking too much, so she started to shake his booster seat, Will then tried to move away from Sarah and accidentally bonked Joel on the head which then resulted in all three kids crying at once. Sarah blamed it on being too tired. It would be nice if they learned (like their dad) to sleep in on weekends.
Posted by chad at 9:31 AM