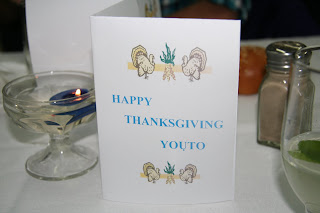 We began our Thanksgiving celebration on Wednesday evening with a turkey dinner provided by Kibbutz En Gev Holiday Village. This resort has hosted BYU students for several decades. We stay for nearly two weeks on the eastern shore of the Sea of Galilee. 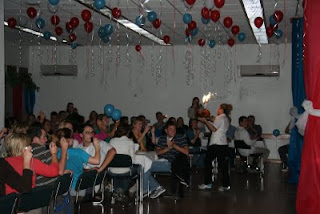 The dining room was decorated with an American patriotic theme. The turkeys were delivered to the waiting students and faculty with flaming sparklers on top. 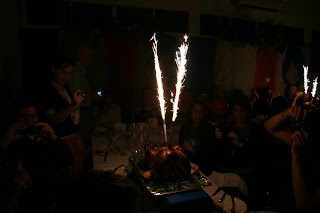 Later that evening in a three hour testimony meeting around a bonfire on the beach, one of the students began his testimony by expressing gratitude to the En Gev Holiday Resort for the wonderful stay and for somehow knowing and taking into consideration that his family's tradition was to present the turkey with sparklers on top (this was the top laugh of the evening). 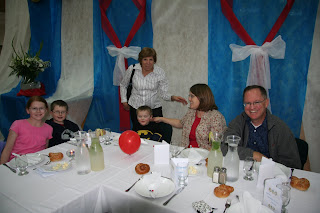 The turkey tasted great (I was the only dark meat fan at our table). It and the corn were the most authentic portion of the dinner. We also had rolls, baked potatoes with dill butter (pretty good), candied yams with raisins, waldorf salad, and apple strudel a la mode--all tasty but with an Israeli twist. 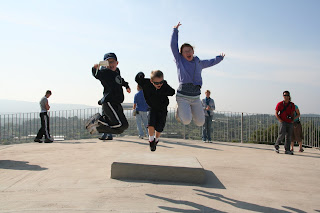 On Thanksgiving day we headed out on our last field trip in the Galilee. First stop was Sefforis (Arab Saffuiryah and Israeli Tsippori). Here we saw Roman ruins and mosaics including the beautiful Mona Lisa of the Galilee. While driving to Sefforis I told the students that it was a mere 7 kilometers NW of Nazareth. Joel then asked an excellent question. He wondered if Jesus had ever visited Sefforis (he probably was listening better and leaning more than some of the sleeping or i-pod listening students). Many biblical scholars have suggested that Joseph and Jesus most likely would have spent time working as craftsmen (a better translation than carpenter and most likely meaning stone mason) at Sefforis--the growing capital of Herod Antipas in the Galilee. Up until 1948 Sefforis was a large Arab village. I told the students how the residents of the village fled to the safety of Nazareth during the war and then were not allowed to return once the war end--even though they were now citizens of Israel. They stayed in Nazareth as "internal refugees" and eventually settled in a quarter of Nazareth that looks out to Saffuriya (read more about this in my book Beyond the Basilica). To make sure that the Arabs did not return to the village the government of Israel bulldozed down the rock homes and then planted trees (this was done to over 200 villages vacated by Arabs during the war). Most tourists to Sefforis never know this part of Sefforis' history. To ensure that my students got the whole story I pointed out the piles of stones from the demolished homes hidden under the trees as well as the olive, pomegranate, almond and other trees planted by Arabs that still are found on the hillside where the village once stood. The only remaining structure from the Arab village is a crusader/Ottoman citadel on the hilltop. The jump picture above (a favorite pose perfected by BYU Jerusalem students) is taken on the roof top of that citadel. 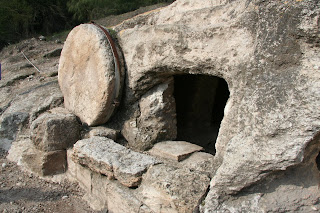 We next made a quick stop at a new site I learned about--a Roman era rolling stone tomb just off the main road on our way to Mt Carmel. 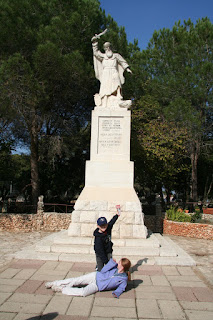 Next we drove to the traditional site of Elijah's confrontation with the priests of Baal on Mt. Carmel. The students had already studied this wonderful story in Old Testament class. I recounted the story (mainly so Joel and Sarah could hear it--Will fell asleep on Marie's lap at the back of the small Carmelite chapel) and reminded the students that when the fire from heaven destroyed the bullock, wood, stones and water on the altar, it destroyed the symbols of the four main Canaanite gods (who were now being worshiped in the northern kingdom of Israel thanks to the adverse influence of Ahab's wife Jezebel) which then showed to all Israel that Jehovah was God. I then noted that when Elijah asked the people "why halt ye between two opinions?," he was exhorting them to return to what the prophets and scriptures had taught their fathers. He was "turning the hearts of the sons to the fathers"--which is why he then was tasked with restoring the keys of temple work to Peter James and John on the Mt of Transfiguration and to Joseph Smith in the Kirtland temple. We then focused on the end of the story where after the priests of Baal had been put to death (as in the photo above) that no clouds turned into a tiny cloud the size of a hand (symbolic of the hand of God blessing our lives?) which then turned into a dark cloud that brought rain and ended the three year long drought. The Lord blessed Israel for returning to the worship of Jehovah. From Elijah on Thanksgiving Day we learned to be thankful for fathers (and mothers) who have gone before and prepared the way by seeking religous freedom in America (choosing a good opinion) and to be thankful for our many other blessings as symbolized by the rain on Carmel. Then we sang "Prayer of Thanksgiving" and "Come, ye Thankful People" both of which have great lyrics that actually tied in to our Elijah discussion. 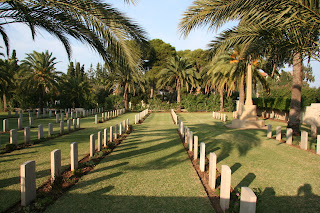 We then drove to Haifa via the crest of Mt. Carmel with a stop as a viewpoint down on the port and the Bahai temple (unfortunately enclosed in scaffolding) and garden. Our final stop was at the German Cemetery in Haifa. This cemetery (beyond the neat rows of the British WWI cemetery) is where two LDS missionaries (Adolf Haag and John Clark) are buried. They served in Haifa in the 1890s among the Germans of the Templar colony and there died of typhoid and smallpox. Present in our BYU group were two great great grand nieces of John Clark. One was in my bus group and the other with the second group. As we sat on the lawn in the corner of the British cemetery, Angie Clark told our group how she had come to appreciate this ancestor for his faithful service. Also buried in the cemetery are two LDS couples--both German converts. Georg Grau was converted (in 1884) by Jacob Spori the first missionary to Haifa. Spori had a dream that he was to go to Haifa and there find a blacksmith with a black beard who was prepared to receive the gospel. Grau had a dream that a man would come the next day with the truth. It happened as was dreamed and Grau was baptized and then a month latter he baptized his wife Magdalena in Acco Bay. Magdalena's grave has the image of a flying angel and the scripture from Revelations about "another angel flying in the midst of heaven..." The grave stones of the two missionaries are marble pillars broken off near the base to indicate lives cut short. It was a touching emotional visit as we talked about serving God wherever called. We sang "I'll go where you want me to go."
Posted by chad at 12:43 PM