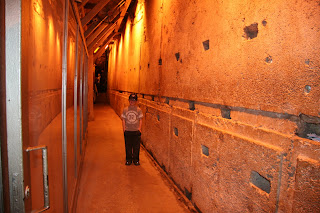 Today's field trip with the students was to Herodian Jerusalem--or in other words ruins from Jerusalem at the time of Christ. Our first stop was a 7:15 AM appointment to tour the Western Wall tunnels. This tunnel runs the length of the western wall of the Herodian retaining wall of the second temple. It starts at the Western (Wailing Wall) and runs to the Via Dolorosa near Lion's gate. 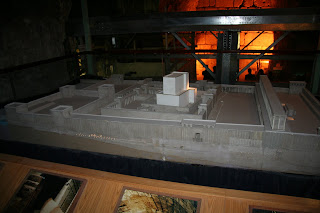 The tunnel when it opened was very controversial because it runs underneath the Muslim Quarter. In this model of the temple the lights (barely viable) show the route of the tunnel. The tour was very informative with nice models about how Herod expanded the platform for the temple and built the retaining walls. 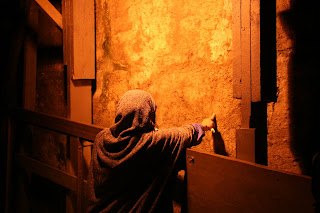 One section of the tunnel is identified as the closest place along the length of the wall to where the temple was located. Because of its closeness, Jews will come into the tunnel to pray at this section. Here is one woman touching the two thousand year old wall that was put in place by Herod's workmen to retain the enlarged temple mount. 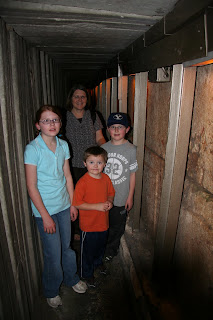 The Herodian stones of the retaining wall are on the right. We are deep under the Muslim quarter at this point. Part of the tunnel passes by Warren's Gate. It is one of four gates that lead on to the temple mount from the west. It has long been blocked up by stones as Jerusalem was rebuilt at higher levels. There is always concern by Muslims that zealous Jews will try to use this tunnel as a beginning point to tunnel eastward under the temple mount in search of buried temple treasures and artifacts. Our guide noted as we passed Warren's Gate that there are no tunnels going under the mount because it is too contentious and it would anger the Muslims of the world. I hope he is right. There were no tunnels branching off from our level, but we passed over excavations at lower levels that could also be access points. 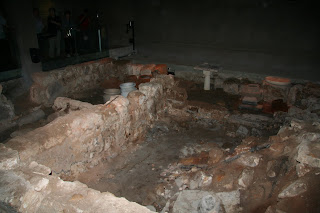 We then visited several interesting sites in the Jewish Quarter. Excavations have unearthed the remains of several Roman era homes. These remains show ritual baths (mikvas), mosaic floors, storage rooms etc. This section of Jerusalem (the western hill) at the time of Christ is where the upper class priests and Sadducees lived. In the Burnt House we could see the remains of one of these home including the charred remains of a roof beam and a layer of ash from the burning of Jerusalem in 70 AD by the Romans. Descriptions of the conquest related how bloody and horrible it was for the Jews of Jerusalem. 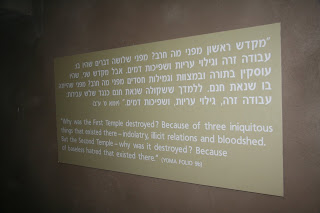 This and others signs in the Burnt House noted that both the Babylonian and Roman destruction of Jerusalem and the temple were the result of wickedness. 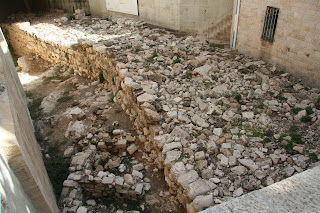 Other excavations in the Jewish Quarter revealed the "Broad Wall" as mentioned in Nehemiah 3:8. This seven meter wide wall was built during the reign of King Hezekiah in the 8th century BC. Isaiah 22:10 notes that a new wall was built and that houses were broken down to build the wall. Such houses can be seen to the left of the wall. This wall would have been built to protect the newer residential areas of the city on the western slopes. It is likely here where the ancestors (perhaps grandparents) of Lehi may have settled--they were probably refugees fleeing the Assyrian destruction of the Northern Kingdom. 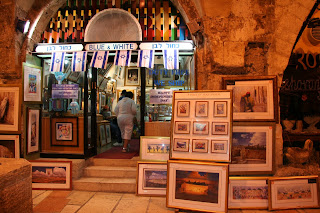 We also toured the Cardo. The main street of Jerusalem after it was rebuilt by Hadrian following the 70 AD destruction. A section of the Cardo is now lined with shops along both sides much as it would have been during Roman and Byzantine times. This shop (this photo is from May 2008) sells interesting paintings of Jerusalem in the future. In most of the paintings the Dome of the Rock is absent. Some show a vacant parcel of ground and others show the third temple in its place. 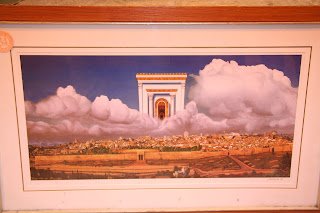 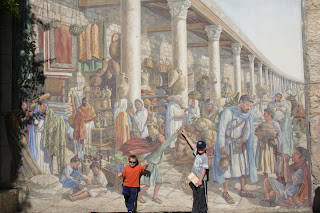 The Roman Cardo started at Damascus Gate and then as it proceeded southward it spit in to two streets. The Eastern street ran adjacent to the temple mount. Here is a large mural showing a Roman street scene. 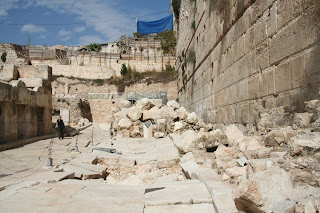 Our final stop was the archaeological digs on the south and southwestern corner of the Temple Mount. Here looking northward towards the western wall you can see the paving stones from the time of Jesus. This was the main thoroughfare of Jerusalem and was lined with shops. Notice the large indentation in the pavement. Most likely made as Romans pushed temple stones off the mount. Behind it is a pile of jettisoned stones left in place. In Matthew 24:1-2, Jesus prophecies that not one stone of the temple would be left on top of another. The Temple Mount was wiped clean. Notice the huge Herodian stones on this southern most section of the western retaining wall. 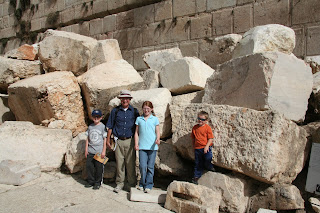 Here is a pile of temple stones as they landed nearly 2,000 years ago. 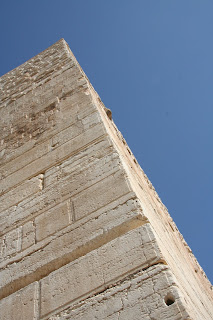 The SW pinnacle of the temple. It is here where Satan may have tempted Jesus to throw himself down so that angels could save him. The SE corner dropping down to the Kidron Valley is the traditional site, but the SW corner makes more sense for it rises above a busy market street where many would have seen the grand angelic rescue. See Matthew 4:5-6 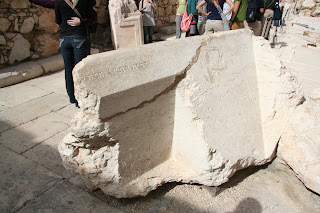 The stone of trumpeting (a replica--the original is in the Israel Museum) stood atop the SW pinnacle. It is identified as the trumpeting stone by an inscription in Hebrew at the top. It has a section carved out for a trumpeter to stand in as he heralds the coming of the sabbath or the beginning of a feast day. It too was pushed off of the temple mount. 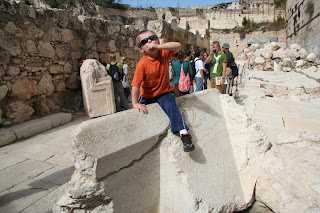 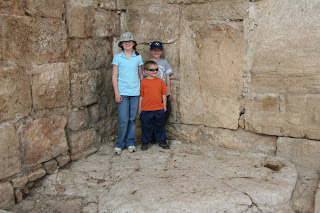 On the south end of the temple mount we climbed up 2,000 year old steps to the double gate that entered in to the temple mount. This is a Herodian stone at the entrance to the rocked-up double gate. Astronaut Neil Armstrong on a trip to Jerusalem after his walk on the moon, asked an archeologist where he could go to walk where Jesus walked. The archeologist took him to these stones leading up and in to the double gate. Armstrong pondered for a moment about where he was standing and then he is reported to have said: "It means more to me to stand on these steps than to stand on the moon." He was happy to walk where Jesus walked--we were too! I have a slide of mom and dad standing on this same stone back in 1982 when they came to visit me while on the BYU Jerusalem program.
Posted by chad at 7:39 AM