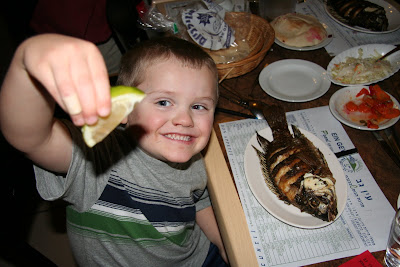 On Friday November 20th Marie and the kids drove up to Galilee for the last half of the long field trip. That night we enjoyed a dinner of St. Peter's fish (aka talapia). Joel and Will were unfazed by the whole fish and enjoyed eating it. 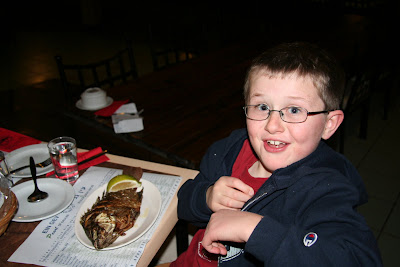 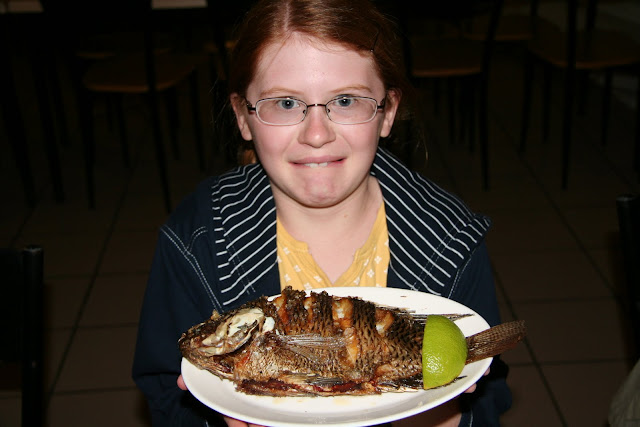 Sarah opted for plain pasta, but did enjoy eating pieces of fish that she didn't have to pull off of the carcass. 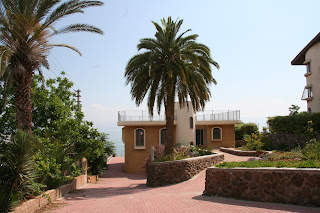 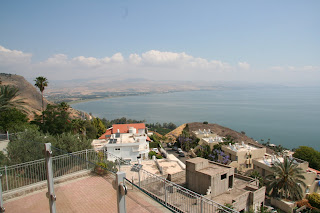 On Saturday we attended sacrament meeting at the Tiberius Branch in its new church owned chapel with a great view overlooking the Sea of Galilee. It was great for me to greet members from when I was a member of the branch back in 1989. 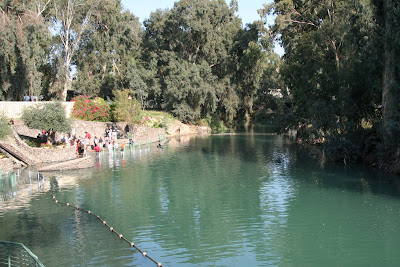 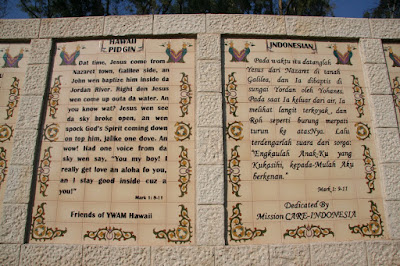 After church we stopped at Yardenit--a Jordan River Baptismal site (not the traditional site which is near Jericho) right where the Jordan flows out of the Sea of Galilee. It is used primarily by evangelical Christians who as part of their pilgrimage experience are (re)baptized in the Jordan. Tiled accounts of the baptism from many different languages decorate the walls of the large complex. We liked the pidgin Hawaiian account the most--which was right next to the Indonesian account.

Sunday morning the kids played on the beach while I taught three hours of New Testament classes. That afternoon we joined with many of the students for an optional activity of floating down the Jordan River. We began at the ancient site of the city of Bethsaida (that was cursed along with Chorazin and Capernaum) and floated in five-man rafts down the peaceful shallow Jordan. There was one little "rapid" (the float was much like childhood floats down the Logan canyon canal out to North Logan) but the greatest danger were the overhanging thorn bushes. There were 10 rafts and we all had fun splashing each other. At the end of the float (about 40 minutes long) Joel and Sarah were able to wade across the whole width of the Jordan River near where it flows in to the Sea of Galilee. Will had strep and this was the first day of his antibiotic so he and Marie didn't come. We'll do it again next semester. 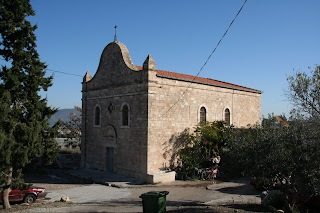 Monday was a full day field trip to some great sites. Our first stop was the Arab village of Nain to a church commemorating Christ's raising of the widow's son. There is not a local Arab Christian congregation in the village so the church is mainly a place for Christian pilgrims. A Muslim Arab caretaker let us in. We read the biblical account and then we talked about Christ's love and concern for widows in both the Old and New Testament. I suggested that the principle of taking care of widows and fatherless should nowadays certainly include single mothers with young children. Next stop was Mt. Tabor--the traditional site of the transfiguration (Mt Hermon to the north is the other possible site). 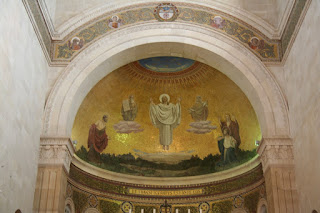 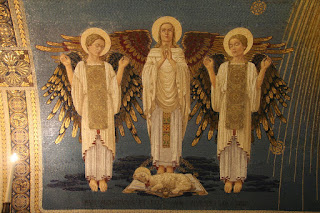 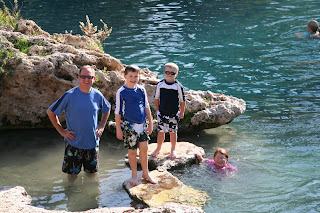 We stopped to see some interesting synagogue mosaics at Beit Alpha. Then we all enjoyed 1 1/2 hours of swimming at the spring fed pools of Gan Hashalosha. 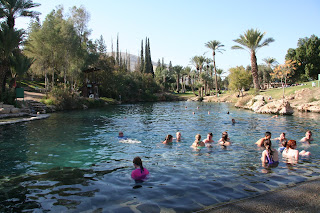 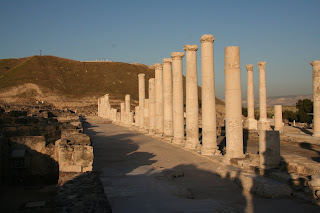 Our final stop was Bet Shean. The heads of Saul and Jonathan were displayed on the walls of the Canaanite city which was located on the top of the tel. Down below are the excavated ruins of the Byzantine city. 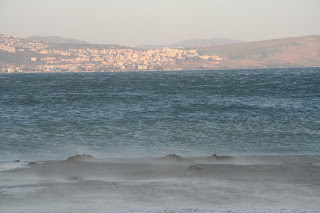 Tuesday morning we woke to very strong winds from the east--the tempest was raging. 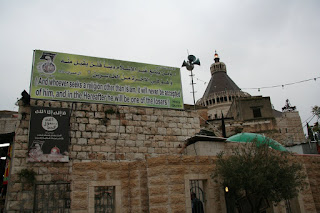 After morning classes, our family drove to Nazareth. By now the winds had turned to rain. During my 1989 stay in Nazareth Christian-Muslim harmony started to decline with the rise of an Islamic party in the local municipal elections. The bill board prominently displayed for all pilgrims to the Church of the Annunciation to see is a good example of that on-going religious divide. 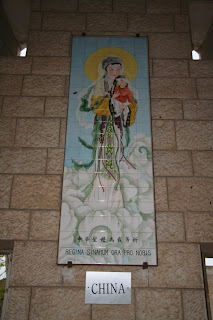 We all liked seeing the dozens of images from around the world of Mary and Jesus that are displayed in and out of the church. 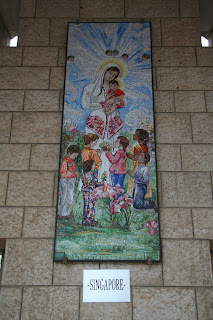 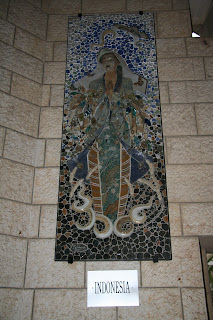 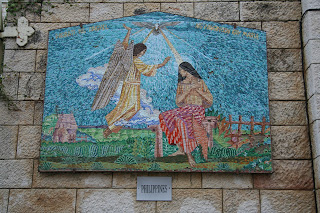 Most of the images are of Mary or of Mary and Jesus. I like this one from the Philippines because it shows the annunciation. 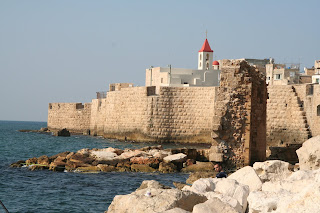 Wednesday's field trip took us to the crusader city of Akko/Acre. 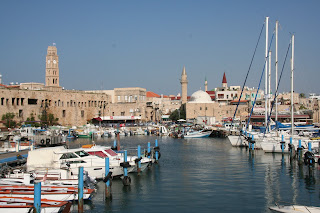 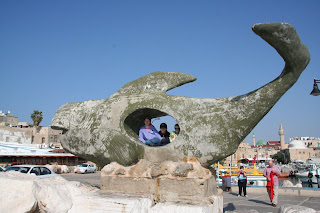 Sarah, Joel and Will in the belly of a big fish. 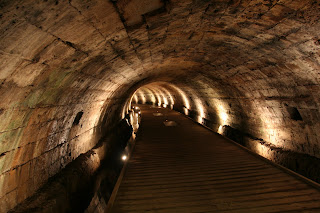 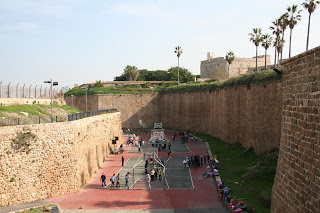 Arab kids on a field trip playing basketball in the crusader moat. 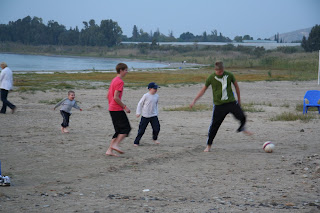 Back at En Gev the kids enjoyed some beach soccer 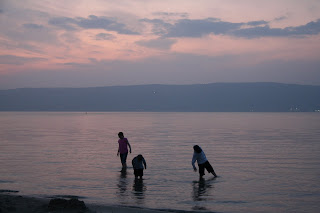 And some wading in the beautiful Sea of Galilee at sunset.

*The title of this post comes from a hymn from the old hymn book. I have memories of singing this song in 1979 on my first trip to the Galilee as we walked from the Mt. of the Beatitudes down to the Sea of Galilee. I introduced it to the BYU students--none of whom had ever sung it before.
Each cooing dove and sighing bough,
That makes the eve so blessed to me,
Has something far diviner now,
It bears me back to Galilee.

Refrain
O Galilee, sweet Galilee,
Where Jesus loved so much to be,
O Galilee, blue Galilee,
Come sing thy song again to me.
Each flowery glen and mossy dell,
Where happy birds in song agree,
Through sunny morn the praises tell
Of sights and sounds in Galilee.

Refrain
And when I read the thrilling lore
Of Him Who walked upon the sea,
I long, oh, how I long once more
To follow Him in Galilee.