My first Christmas away from home found me on the other side of the world. I was in my second month as a missionary in Semarang Indonesia which is 8,916 miles away from my childhood home in Logan, Utah. In the weeks leading up to Christmas I found little in a Muslim majority country to remind me of my favorite holiday—I was in hot, humid, green Indonesia  with no chance of having a much loved white Christmas. One day Elder Gary Stephens (also a Logan High graduate) and I happened upon a small Christian book store. We went in to look around and I was surprised to find a Christmas cassette for sale. Its title song was “I’ll have a blue Christmas without you” by country crooner Jim Reeves. There were no other choices and so it became my sole source of Christmas music listening that year.

I'll have a Blue Christmas without you.
I'll be so blue thinking about you.
Decorations of red on a green Christmas tree,
Won't mean a thing if you're not here with me.

I'll have a Blue Christmas that's certain.
And when that blue heartache starts hurtin'.
You'll be doin' all right, with your Christmas of white,
But I'll have a blue, blue Christmas.

For much of December it looked as if I would have a blue Christmas. Only occasionally did it ever seem like the holiday season back home. On December 10th two packages arrived from home filled with two Logan High Frisbees, boxes of Jello instant pudding and packages of Wyler’s instant drink mixes. On December 18th we visited the home of a Christian minister and were delighted to see a home decorated with Christmas trees, lights and candles. Interestingly, that same evening I noticed that there were colorful lights strung outside the central mosque which I happily took as Christmas lights. I’m not sure why they were on display but in my journal I wrote that perhaps Semarang’s Muslims were “catching the true spirit of Christmas.” Another night’s mind games found me riding my bike in the rain and dark at 6:00 pm and being strangely reminded of Christmas shopping along Logan’s Main Street on snowy December evenings that also darkened early. Being the only person in the branch who could play both hands of hymns on the tiny pump organ was perhaps the best reminder of Christmas. I arrived in Indonesia only able to play a few hymns so most days I would fit in practice time to learn new ones, which for the month of December meant Christmas songs. I then played (some better than others) those newly learned hymns each Sunday in Sacrament meeting and during Sunday School hymn practice.

The blue in Christmas all seemed to vanish in the final days before Christmas as the four elders in our district (we lived in the upper story of the house-turned church on Pekunden Timur Street) busied ourselves with Christmas preparations. As a district we had decided to make some Christmas Eve visits and so we bought and wrapped present for three families as well as presents to exchange between the four of us (I arranged for Sister Sandra to buy a book for my gift to Elder Stephens since it was impossible for me to slip away and buy one on my own). I also used skills learned from my Grandma Fife during a Thanksgiving Day craft activity. I took a Reader’s Digest and folded down the corners of every page. When flayed out the magazine took on the shape of a conical Christmas tree which after being painted green and decorated with cutout  paper ornaments didn’t look too bad.  Two days before Christmas the branch put up a rare real Christmas tree, with lights, in the chapel/cultural hall/former living room for our branch Christmas Day party. Next day while waiting for the other elders, I relished just sitting downstairs looking at the tree and listening to the Relief Society Choir practice singing Silent Night. 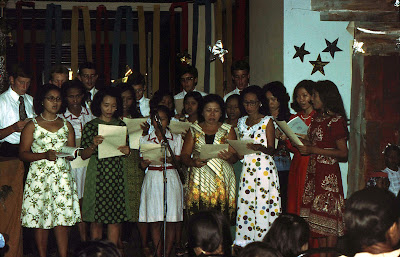 The first family we visited on Christmas Eve was a poor single mother and her daughter Augustine. They were not yet baptized, but they attended church each week. They lived on the outskirts of town in a small house with a dirt floor. They welcomed us warmly. We gave Augustine a wrapped bag of candy and cookies. Her eyes lit up at such a simple gift. They were happy in their humble circumstances and I left feeling humbled by my life of plenty. Next stop was the family of Koes who spent most of his days living at the church where he worked as the church janitor, night watchman and clothes washer (for the elders). He and his wife and their two young children were members of the church. They lived in a one room house which barely held all of us. They too were happy and welcoming in their humble circumstances. We held a family home evening together and then we presented the family with a gift—a large tin of mixed varieties of butter cookies in which we had hidden 25 new one hundred rupiah bills (400 Rupiah = $1.00). It wasn’t much money to us, but to the family it represented more that a week’s income.


For our final visit Elder Stephens and I went to visit the Suriyana family. They were our golden family (parents and six kids) all set to be baptized on December 27th.  Also in attendance were an aunt and uncle, cousins and friends so it was quite a gathering. We held another Family Home Evening filled with reading the Christmas story from the Bible followed by singing--most touching to me was when the mom and her four cute daughters sang “Away in a Manger” in Indonesian. For an activity I taught them all how to make six pointed snowflakes which soon decorated the walls of their home. After a prayer and refreshments, we presented our gifts—a Logan High Frisbee, a Bible (with photos of us inside), my small homemade Christmas tree and a sack of candy and cookies for each of the children. Once again eyes lit up at such a simple gift.

It was a long bike ride back to our home that Christmas Eve. There I ended the day by playing some Christmas hymns on the pump organ, writing in my journal, reading the Christmas story in Luke and Matthew and then kneeling in personal prayer. Excerpts from my journal entry for the day include: “This Christmas I have truly learned the importance and blessings of giving. It feels so good to know I was able to help somebody and brighten their Christmas season. I am truly blessed….[A]s a missionary I have had more time to think about Christ and the real meaning of Christmas. I have felt His spirit this day before Christmas.”

Christmas day was full of good food, including a special breakfast, delicious raisin cake and cookies delivered by Sister Adams--an American member in our branch, and an early dinner of sweet and sour pork at a restaurant in Chinatown with Sister Meyer and children who were visiting from Jakarta. That evening we enjoyed a wonderful Branch Christmas party complete with singing, scripture reading, a manger scene by the primary kids, and a visit from Santa Claus (Elder Blazer). We then hurried over to an investigator family for a special Family Home Evening and more food. We ended the day with an exchange of gifts between us four elders. 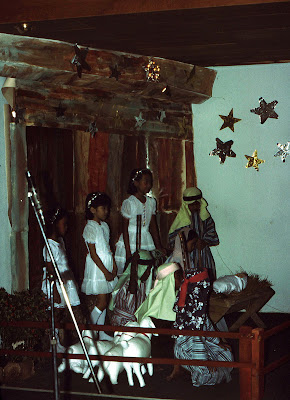 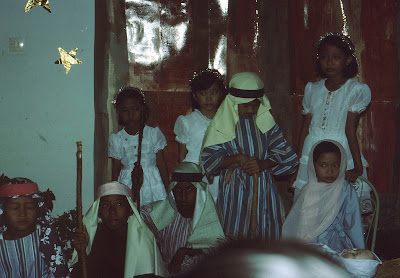 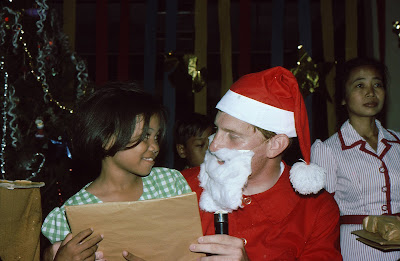 To this day, whenever I hear “I’ll have a blue Christmas without you” I think of Semarang Indonesia and my first Christmas away from home. There was little that year to remind me of a traditional Christmas back home, but there was plenty to remind me of the real meaning of Christmas.