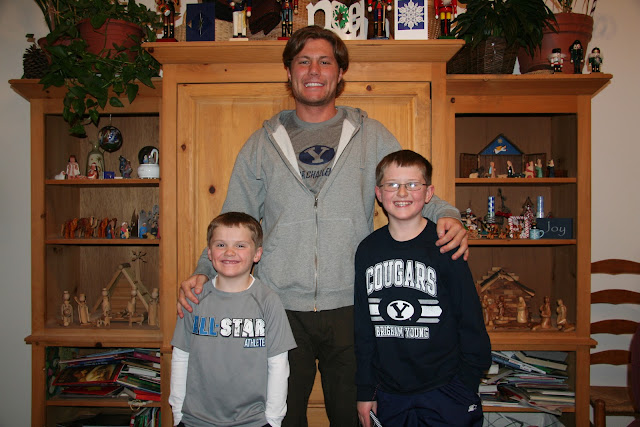 The Emmett boys love sports, especially BYU football, and especially watching their second-cousin Riley Nelson play. Marie thought it would be fun for Joel and Will to meet their favorite quarterback so she called her uncle Rod Tueller (youngest brother of her father Blaine) to see if his grandson Riley would be willing to arrange a meeting. Rod called Riley and he agreed, so on Wednesday night he dropped by our home for a delightful 30 minute visit. What a nice guy. He focused in on all three of the kids finding out their ages and interests. He told them about what sports he played growing up (all of them, it seems), that he took piano lessons until age 16 (his grandma Nelson was a pianist), that he loved his mission in Barcelona Spain, and that he hopes to go to medical school (what a great example of living a good life). We also talked about the Tueller family (dancing of course was one of the topics) and then I explained how I went to Logan High with his mom Joni Tueller's older sisters, how I knew his great-grandmother Ida Schaub from the Logan 18th ward, how my parents and Aunt JoAnn were good friends with his grandparents Keith and Karma Nelson (my mom later told me that she dated Riley's grandfather Keith twice in college) and then we made the connection that Riley served in Spain with a Sr. Missionary couple from our Springville Stake who worked together at my request to find out the cause of death years ago of the daughter of a ward member who was living in Spain. A mission friend of mine Ralph Zobell, works for BYU athletics in media and publicity. I called him last week to see about getting something for Riley to autograph. Ralph came up with a media book and souvenir game program which Riley graciously signed. Joel spent the rest of the evening reading all kinds of details about BYU players, team stats, football history etc.in the media book. Marie made a batch of her famous scotcharoos for Riley to take home. 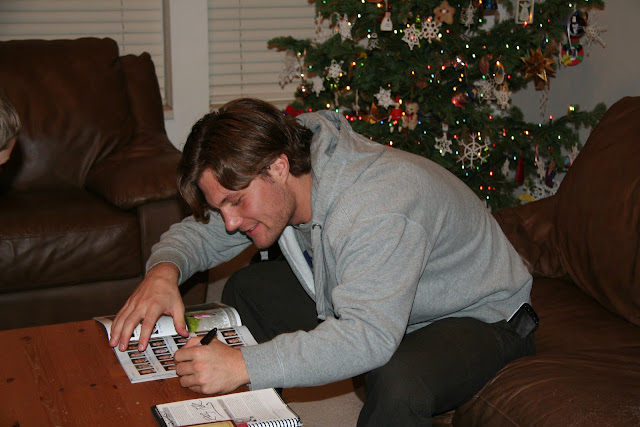 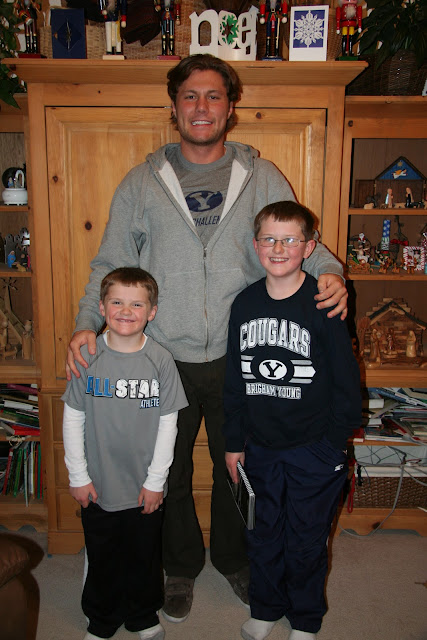