Last Days (of skiing and the Subaru?) 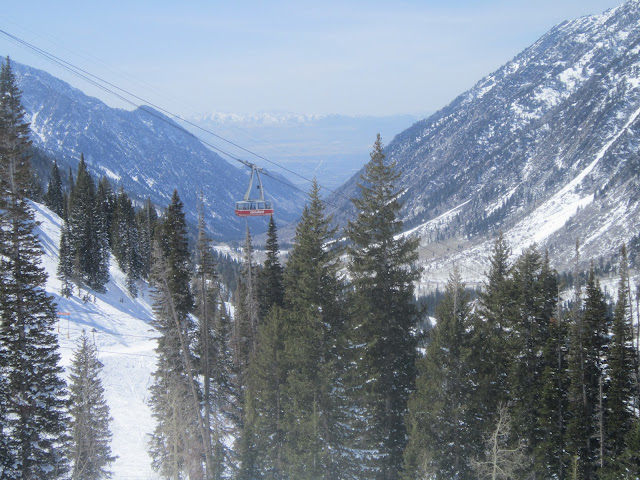 My scouting duties for Saturday were to include helping to get a fund raising project organized (delivering bins to BYU apartments to collect end-of semester discarded items from students to sell in a yard sale), but when it snowed on Friday and promised sun on Saturday, I bailed on my church/scouting duties and focused on my fatherly duties--which includes the high priority of skiing as often as possible with my children. One last day of skiing was calling and I couldn't resist. Earlier in the week it was my responsibility to call and arrange with the apartments for the collection bins so I did help out--just not on a near perfect ski day! Last fall I bought two-for-one ski passes to Snowbird anticipating that we would ski there at least twice as part of Joel's Ski Utah fifth grade passport that allows him to ski for free three times at each Utah ski resort. Snowbird is a more challenging resort and so I saved it for last. Since it was the first time there for all three kids, we explored as many runs and lifts as our legs could handle. It was probably the most vertical feet the kids have ever skied. 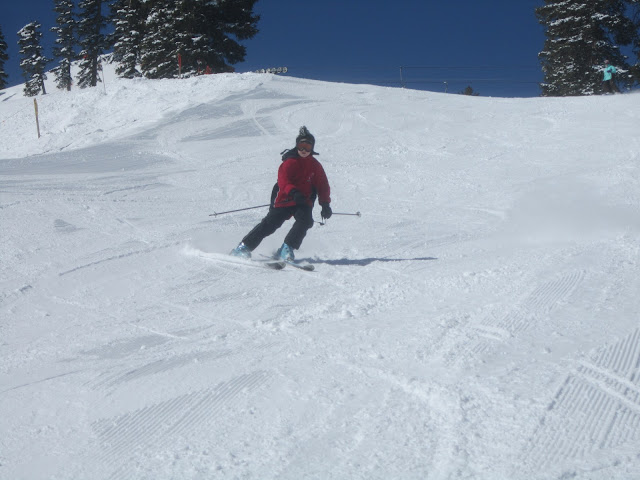 The first few runs were perfect. Soft snow groomed into corduroy. We all loved it. Sarah even commented on my non stop smile. Joel forgot to put his jacket in the car and so he used one of my Norda's fleeces. It worked well. 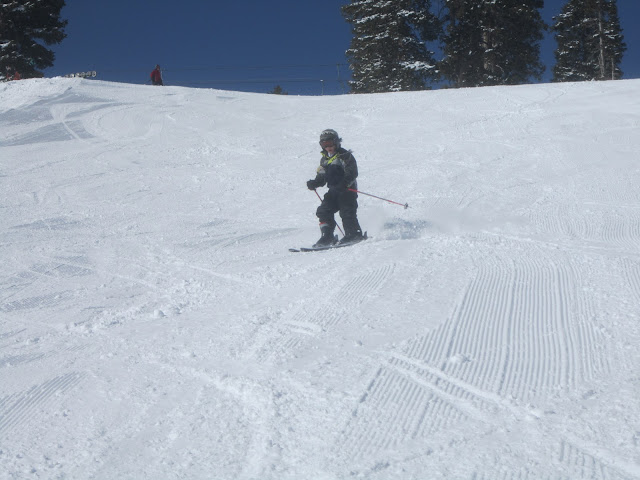 Will did a great job at keeping up for most of the day. He and I did sit out one run later in the day to readjust our boots and give our achy feet a rest--I think we both could use new boots. 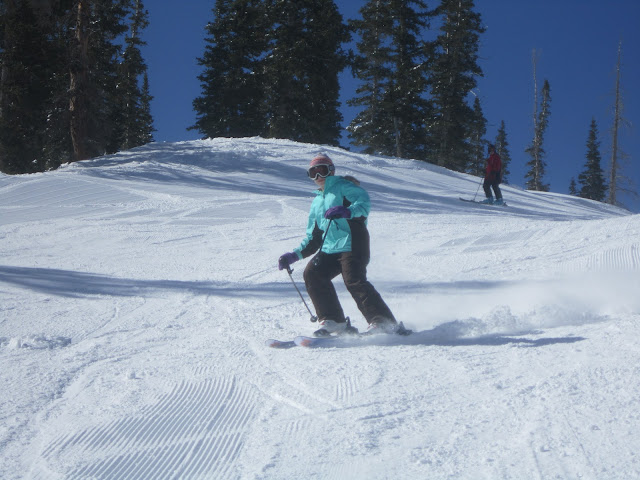 I'm happy that teenager Sarah is still happy to ski with her old dad and her two younger brothers. 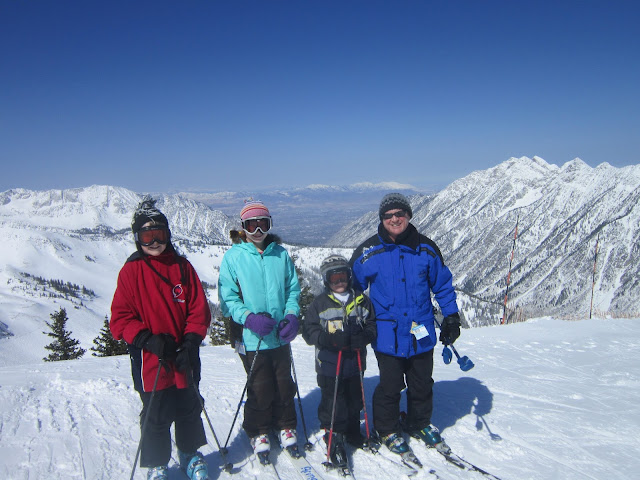 When we got in line to ride the tram, the loading platform was already quite crowded. A tram attendant noticed me with the three children and invited us to follow him through the crowd to the front of the line. He let us load first so we wouldn't get trampled and so that we could get front row spots looking out the front window. It was so fun to see the kids' delight as the tram climbed up to the 11,000 foot summit of Hidden Peak. From Hidden Peak (above) there is a great view down into Salt Lake Valley. 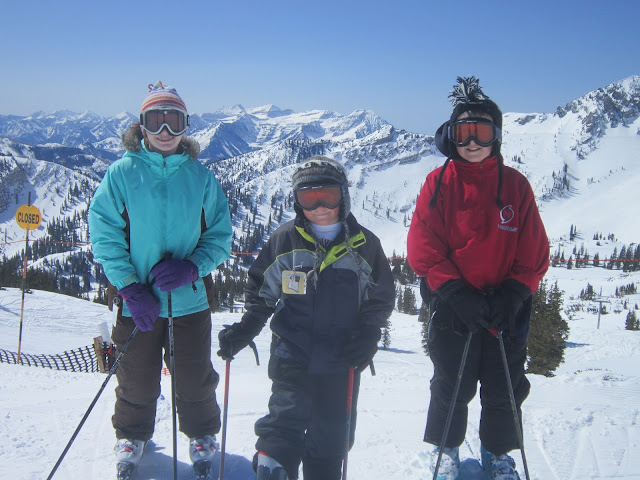 On Mt. Baldy overlooking Mineral Basin with majestic Mt Timpanogos in the background 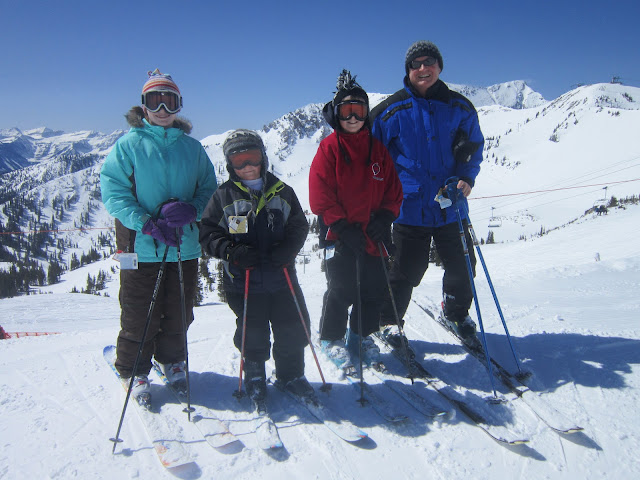 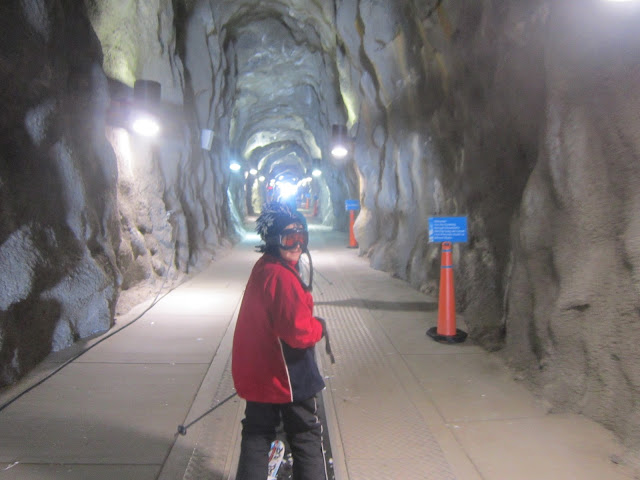 Riding the magic carpet through the tunnel from Peruvian Gulch over to Mineral Basin. 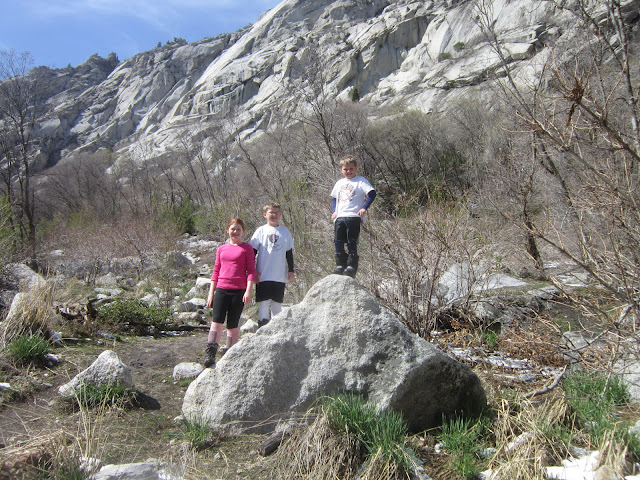 By 3:00  we were skied out and so we loaded up the Subaru and headed down steep Little Cottonwood Canyon. We were listening to a CD of Oklahoma (the Hugh Jackman version) and had just passed all of the slide areas when the car started to act funny. I wasn't quite sure what was happening, but I soon realized that my brakes were not working. I was able to slow down by downshifting and by pressing as hard as I could on the brakes. I turned on my flashers and kept looking for a place to pull over. Before long a big parking lot at boulder gate came into view. I pulled in and with a full press on the brakes was eventually able to come to a stop. Whew! I called Marie (at the last minute as we loaded into the car she handed me her cell phone--just in case) and she called our neighbors the Shaws who run a towing service and then she drove up to rescue us. While waiting we hiked around the area known for its great rock climbing. The granite stone for the Salt Lake Temple came from this area.

Last year driving up Big Cottonwood Canyon to Solitude, the alternator on the Subaru went out. I did not have a cell phone so we waited until a canyon policeman stopped to help. We used his phone to call a tow truck and to arrange to have Marie meet us at Doug Smith Subaru in American Fork. I was not happy to have something similar happening again. Just last month we spent a lot of money on the 1997 Subaru's 130,000 service (at Doug Smith) hoping that it would be able to render several more years of service to scouts and skiing. I kept thinking the worst--that the car had climbed its last mountain.I was delighted today to find out that Saturday was not the Subaru's last day. Apparently the timing belt had skipped out of line (or something like that) which killed the motor and the automatic brakes. I explained to the Doug Smith service guy earlier today that the car had just been serviced by them last month and that I had three kids in the car on a very dangerous road. I'm not sure what policies were put in to place (fear I might press charges or just good customer service) but I was certainly happy to find out that there was no charge for fixing the timing belt. Horray! We were prepared for the worst which meant being either a one car family or having to buy a new car we couldn't afford. Special thanks to Marie who made the car the focus of her Easter Sunday fast. Her prayers have also worked on the washing machine.
Posted by chad at 10:52 PM