Parable of the Hopeful Gardener 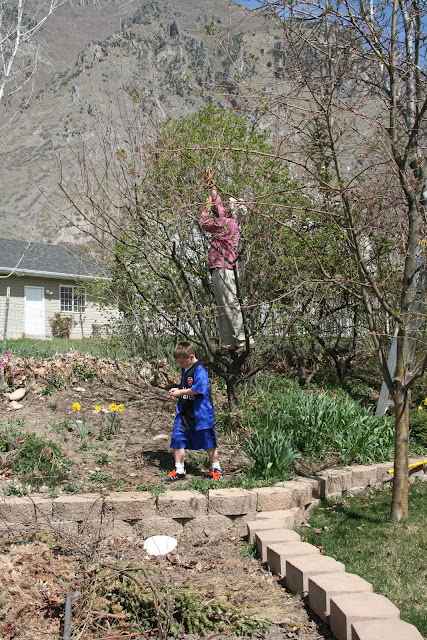 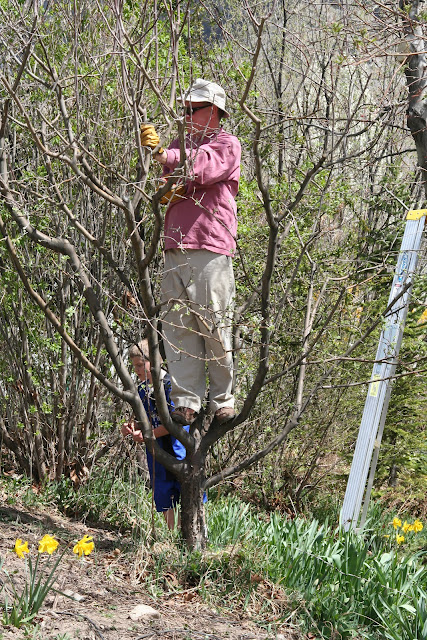 Last Saturday while listening to the morning and afternoon sessions of LDS General Conference, I kept busy pruning trees (walnut, filbert, and two apples) in the back yard. Will became my willing worker gathering up the twigs and branches which were piled in the vegetable garden for our upcoming slash-and-burn bonfire. Marie slipped out and took this photo of me in the Jonathan apple tree and Will piling branches. It reminded of a parable I wrote in November 2007 for a ward conference talk. It is entitled “the parable of the hopeful gardener.”

A new homeowner of an unlandscaped home went out to begin his garden. The land was rock strewn and poor in soil so he began by gathering up the multitude of rocks and carting them off to other yet ungardened lots. Once the rocks were gone, he had top soil dropped at the edge of his yard. He hauled and hauled and shoveled and shoveled and even recruited friends and family members to haul and shovel until the whole yard was covered with goodly soil. Then in order to make sure that the soil would be productive he borrowed a neighbor’s truck and brought in several truck loads of manure and hauled and hauled and shoveled and shoveled until the manure was evenly spread over the top soil. Then he tilled and tilled until the soil and manure were mixed and ready for planting. Then because he lived in an area of limited rain and frequent droughts, he ordered 1700 plugs of drought resistant buffalo grass to plant in his front yard. The directions for grass planting suggested making sure that there was plenty of organic material in the soil and so he bought several bails of hay and ground it up under his lawn mower and then spread the hay over the soil and tilled it in. Then he planted the buffalo grass one back breaking plug at a time. It was in the fall of the year—as recommended in the planting instructions. He watered the grass in the fall and then hoped for a snowy winter to help the grass grow even better. The snow was limited that year and the grass did not grow that well at first, but the many unknown grains of wheat that were hidden in the bales of hay certainly grew. They were grains of winter wheat that sprouted in the fall and then exploded to great heights in the spring. The spring rain and sun also brought on a plethora of other weeds and so the gardener spent much time pulling out wheat and weeds from among the 1700 plugs of buffalo grass. The best pulling time was after a rain storm when the roots of the wheat and dandelions and other varieties of weeds were easily pulled from the thick rich soil. Soon most of the weeds and wheat were gone and the grass sent out it shoots filling in the bare spots and turning the front yard into a nice plot of grass that could grow without thrice weekly waterings. Neighbors, a wife and a mother were not overly impressed with the bluish-green grass but in the eyes of the gardener the grass looked wonderful.  For a time, all looked well, but then from the bowels of the earth there sprang forth the most evil of all weeds--the dreaded bindweed which is more commonly known as morning glory. For many years the gardener tried poisoning and pulling but the bind weed would not budge. Unlike most other weeds, its extensive root system ran parallel rather than perpendicular to the ground. The roots could not be pulled up. The gardener continues to pull up the morning glory, but he knows that it will always return.

The hopeful gardener made similar preparations in the back of his yard. There he invited neighbors to help lay sod of normal Kentucky blue grass which pleased his wife very much. He also planted many trees so goodly fruit could be brought forth. He also prepared a large vegetable garden. To enrich the soil he added much mulch from kitchen scraps and fall leaves and neighbor’s lawn clippings. Every spring he would burn a big bon fire comprised of the dry Christmas tree, and prunings from trees, bushes and grapes. The ashes were then tilled in to the soil. From that soil sprang forth tomatoes, beans, beets, swiss chard, squash, peppers, peas and surprising only a limited amount of zucchini. Each seed and seedling was planted according to the instructions. In the first year of planting, these savory crops were a favorite of big green tomato caterpillars. They were easily plucked off the plant and squashed into the soil. Then came the squash beetles. These were harder to find and harder to smash. Stray rocks were used to smash all the beetles that were seen. But they kept coming and so the gardener, under advice from the KSL Garden show, started looking under every squash and zucchini leaf for the tiny amber colored eggs laid in triangular formations. Portions of leaves with the egg clusters were ripped off and thrown into the garbage. This year there were almost no squash beetles to plague the crop. Grasshoppers also came. Thanks to deceptive praying mantises, effective foot stomping and an occasional dose of grasshopper poison the number of gluttonous grasshoppers has gradually decreased. When rapidly growing globe willow branches started to shade the tomatoes, the tree was trimmed to provide sunlight. Threats to cut down the shade-casting tree have been met with strong resistance from the children of the gardener who love to climb in the tree. (for the story of the demise of the globe willow go to http://beitemmett.blogspot.com/2011/07/globe-willow.html.) Every four days the vegetable garden was watered with soaker hoses or with an occasional thunder storm. Trellises were put in place for the gourds and beans and wire cages for the tomatoes. After all the hard work the gardener was blessed with a bountiful harvest. BLTs were enjoyed, salsa was made, and daily the family enjoyed eating fresh vegetables. The trees that were planted brought forth plums and peaches, apples and apricots. Grapes were made into juice and chokecherries into jelly. Much loved raspberries were picked and consumed by children who often forgot to save some for their father. But some days, with a reminder from their mother, they remembered to save some and the hopeful gardener was able to enjoy the fruits of his labor with his family. And in the end after hard work, much mulch and many weeds it was all good for the gardener.

And now for the interpretation of the parable: In many parables the gardener is the Lord, but in this parable the gardener is you and the gardener is me. You, like me, are desirous of bringing forth good fruit. To do so there are some basic things that we need to do. 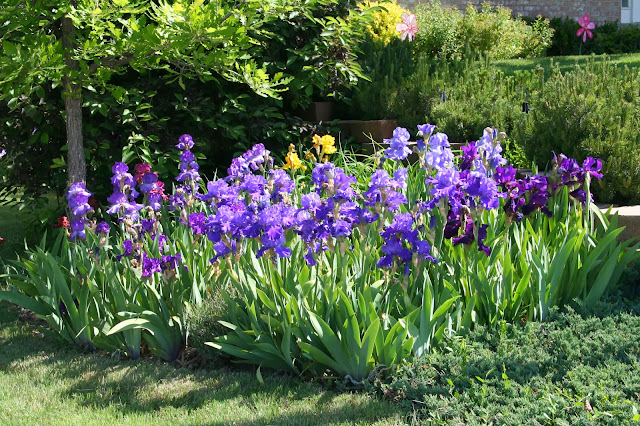 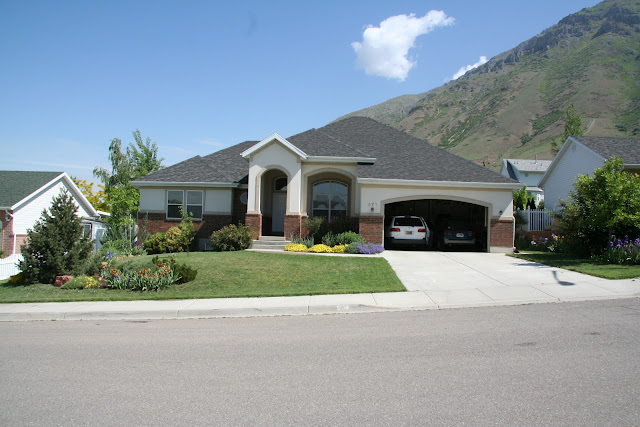 The next photos were taken in September 2013 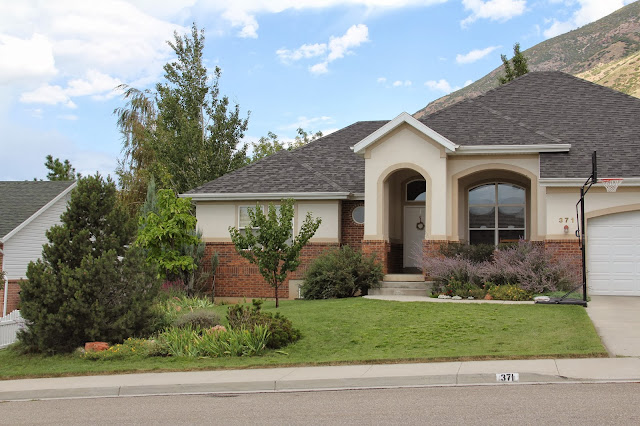 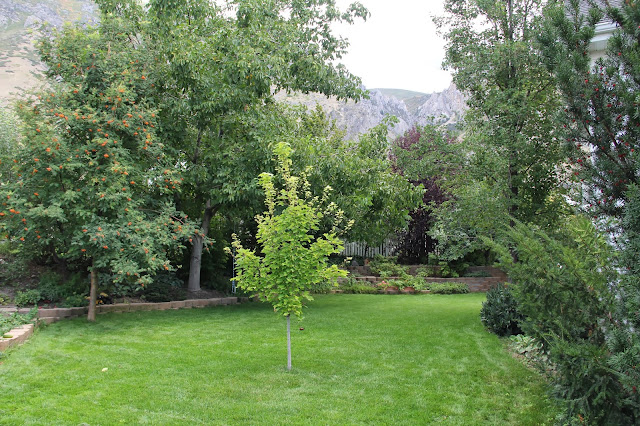 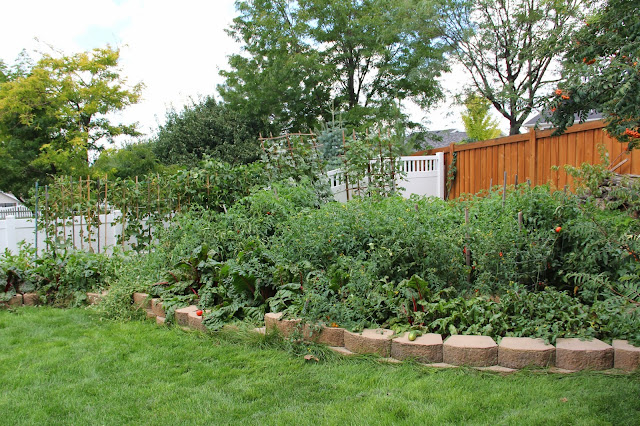 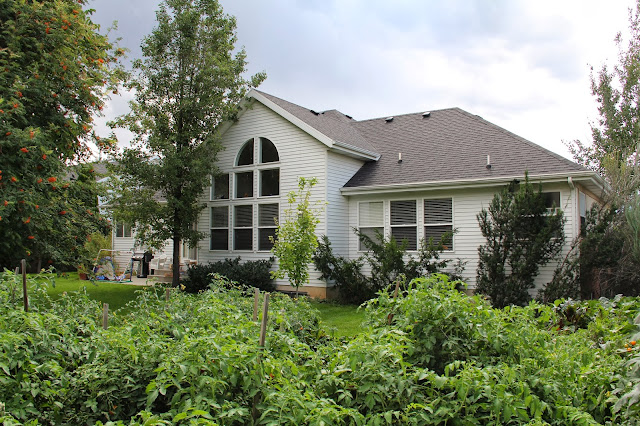