Deacon Joel and his 12th birthday 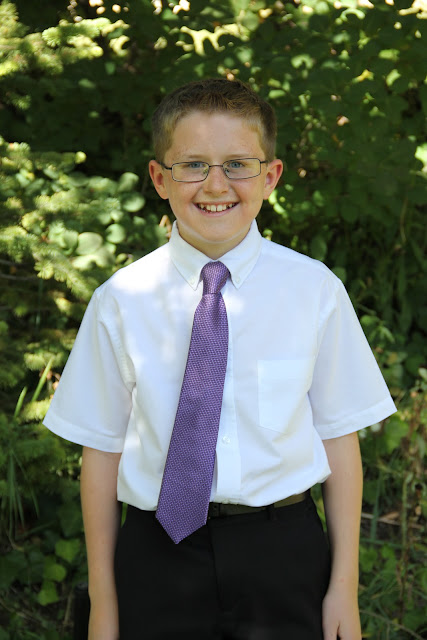 Today Joel was ordained a Deacon in the Aaronic Priesthood of The Church of Jesus Christ of Latter-day Saints. Before going to his interview with our bishop, I showed Joel what his priesthood line of authority looked like based on my line of authority as documented on a card my father gave me when he ordained me a High Priest. When Joel realized that there were only ten levels of people in the line of authority between him and Jesus Christ, Joel responded with an enthusiastic: "cool!" It is cool and an amazing thing that the Priesthood of God is still on the earth and functioning.

Here is the line of priesthood authority leading back to Jesus Christ. 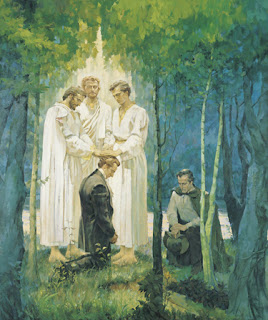 Joseph Smith Jr. and Oliver Cowdery received the Melchizedek Priesthood in 1829 under the hands of Peter, James and John.

They were ordained Apostles by the Lord Jesus Christ as noted in John 15:16. 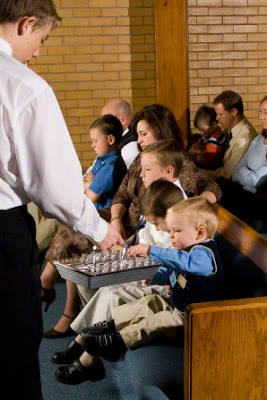 As a deacon, Joel will now pass the sacrament, collect fast offerings, and watch over the church. Lest you think that Joel will now be entering a monastery, here are some of the fun things he did (and will continue to do) to celebrate his birthday and life in general. 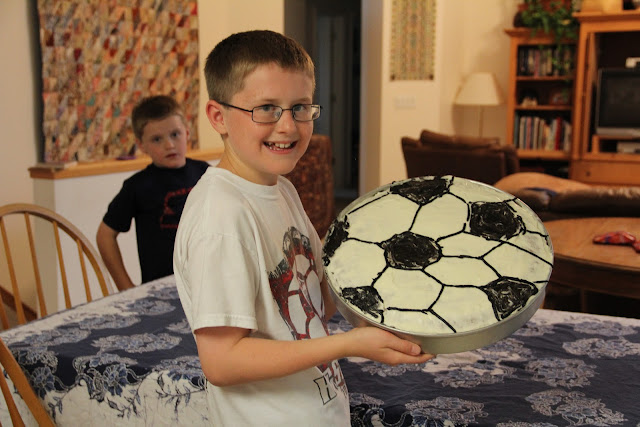 On Friday night Joel had a birthday party with 15 friends from the neighborhood/ward, soccer team and school. Marie baked the cake and Sarah decorated it. 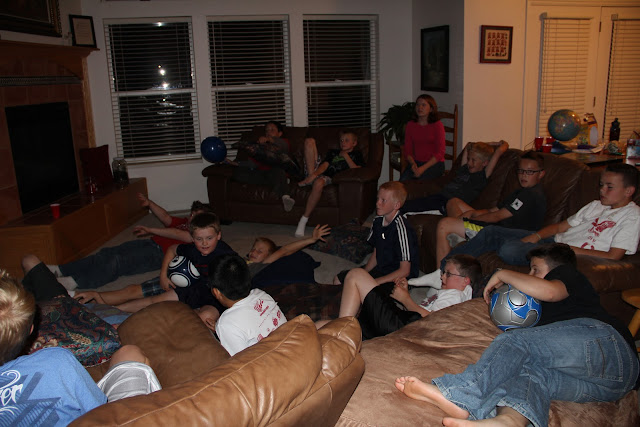 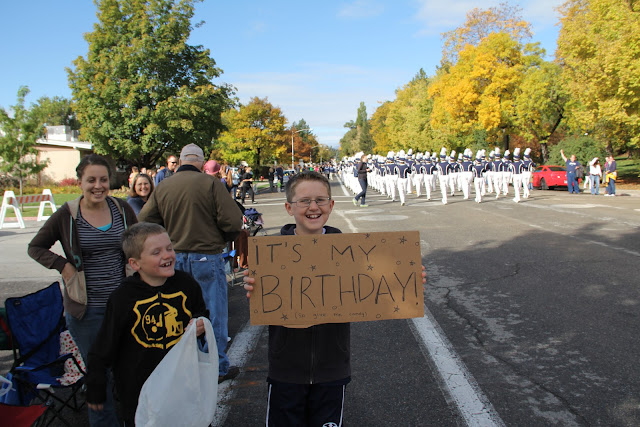 Next morning we went to the BYU homecoming parade, something we have done each year for the past 12 or so years. Marie came up with the brilliant idea to have Joel hold up a sign stating it was his birthday. Creative Sarah was tasked with making the sign and added "so give me candy" to the base of the sign". A few people were skeptical (Joel really was born on October the 13th--a Friday the 13th with a full moon!) but most paraders (students and honored alumna) saw the sign and then did something. Most just hollered out "Happy Birthday"--mostly in English but some of the students marching with the International Students organization did it in other languages. 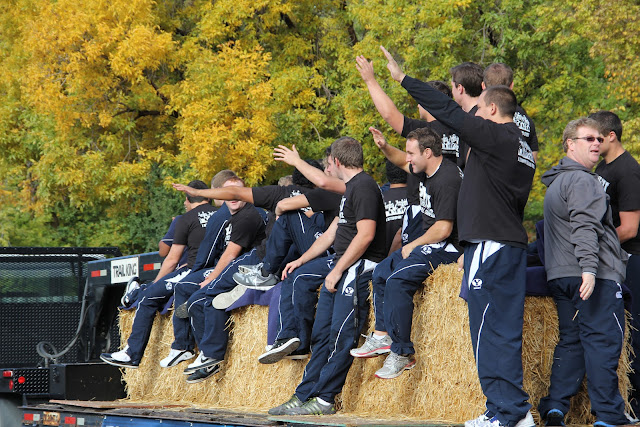 Others went the extra mile in their greetings. The first "float" was the BYU men's Rugby team (national champs last year). In what seemed to be spontaneous combustion, they all say "Happy Birthday!" with gusto.

A cute girl from one of the student dance troops took a few dance turns with Joel. One of our BYU Jerusalem students walking with the Student Alumni Association made sure both Joel and Will got a miniature blue football. Others handed Joel a liter of Brick Oven root beer, a BYU Chinese Flagship Center t-shirt, an inflatable globe, a balloon, another ball, and tons of candy. It was quite a haul. 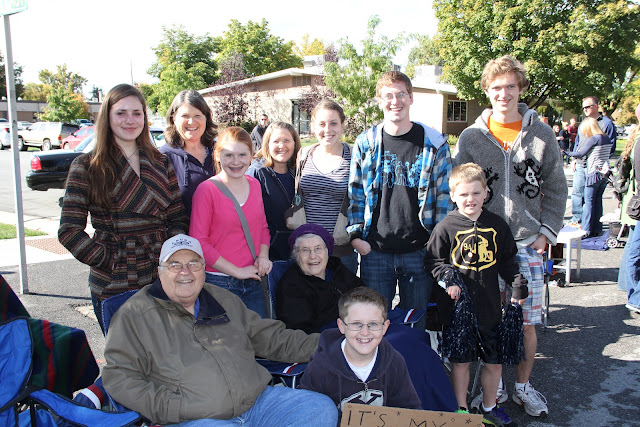 All of the Tueller/Emmetts in attendance (including three BYU student cousins) were quite entertained with all of the attention Joel got. He was very gracious and said thanks to all well-wishers. 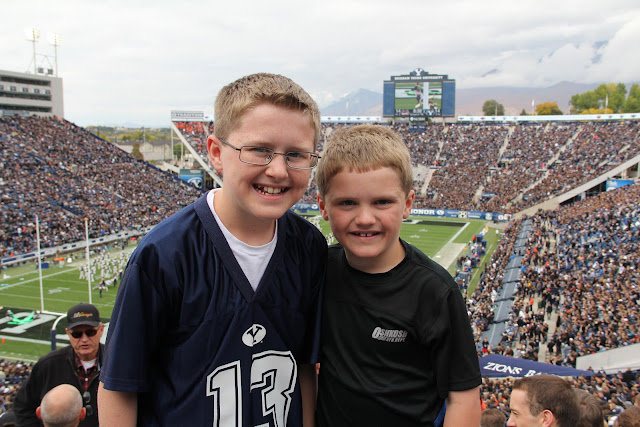 That afternoon Joel, Will and Dad went to the BYU-Oregon game. It started out fun, but didn't end so well (BYU 24, Oregon State 42). Joel is wearing one of his birthday presents: a Quarterback Riley Nelson #13 jersey. Joel has long considered the #13 to be his lucky number, since he was born on Friday the 13th. It is his chosen number on his soccer jersey. 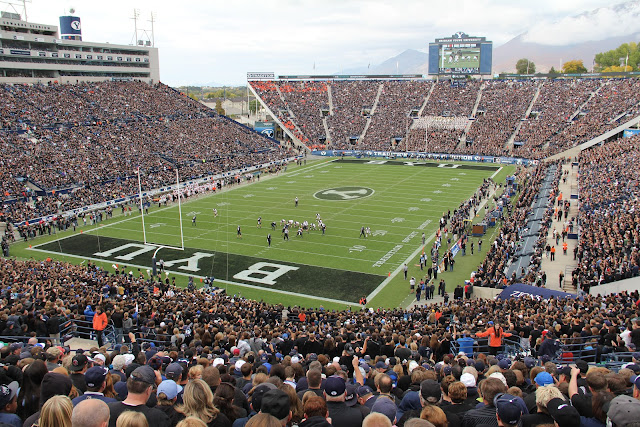 It was a "blackout day"--most everyone in the stands wore black. Those in orange in the far distance are the Oregon fans. 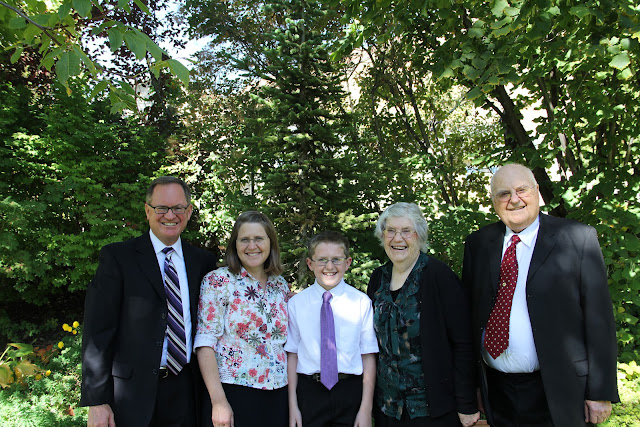 Grandma and Grandpa Tueller joined us for Sunday church meetings and for Joel's ordination afterwards. Joel memorized and passed off his final Article of Faith last night and wrote out his testimony this morning, which means he completed all of the requirements for the Faith in God award--which he was presented in Sacrament meeting.  This has involved four years of learning and living the gospel (teaching Family Home Evening, learning hymns, giving prayers etc.) serving others (doing service projects (many), writing thank you notes etc), developing talents (learning to play the piano, participating in team sports, attending concerts, making things etc), and preparing for the priesthood (reading scriptures that teach him about the Priesthood). He is a faithful young man. 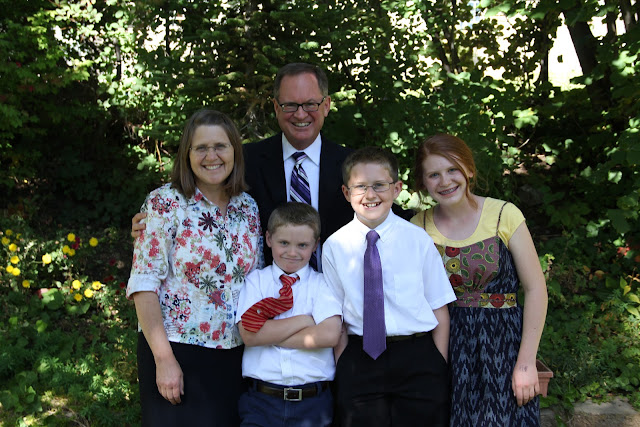 Marie made sure Joel was outfitted in a new shirt, tie, pants and belt--although her choice of a nice conservative black and blue tie was not to Joel's liking. He instead chose purple and lime green ties. Two other deacons sported purple ties today so Joel is right in style. Way to go Joel. Your parents are proud of you.