This past week Joel and Will both participated in the Adidas Cup at the huge soccer complex with 35 fields in West Jordan.

Joel's team is starting its third season. The first game was tied 1-1 (goal by Joel), the second game they won 2-1 (with a beautiful assist by Joel), the third game they tied 0-0 and the fourth game, semi final, they lost 3-1. 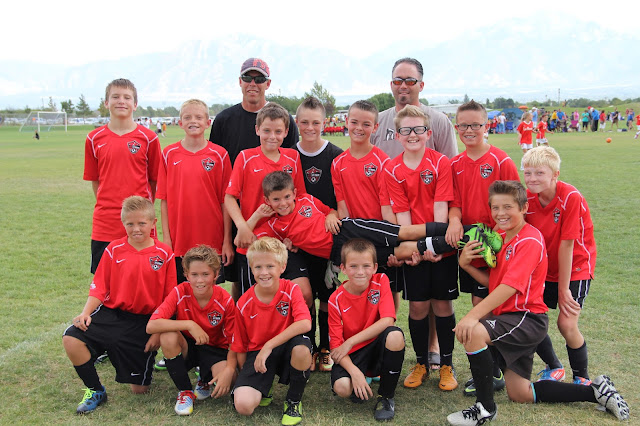 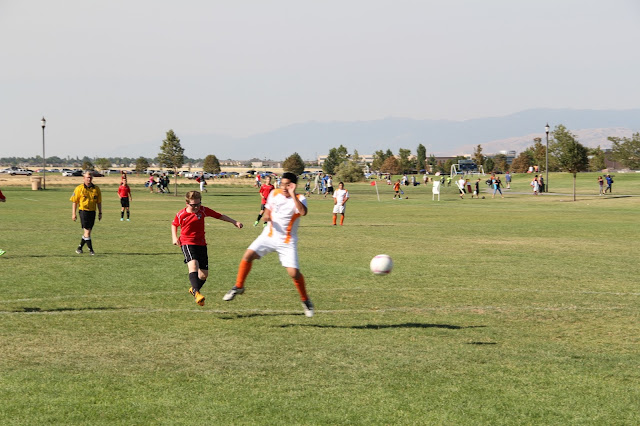 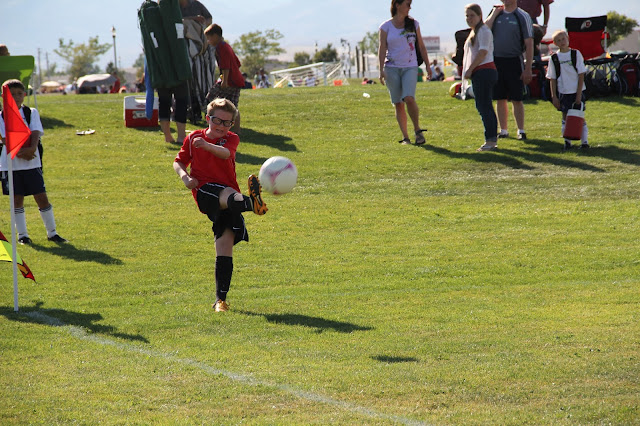 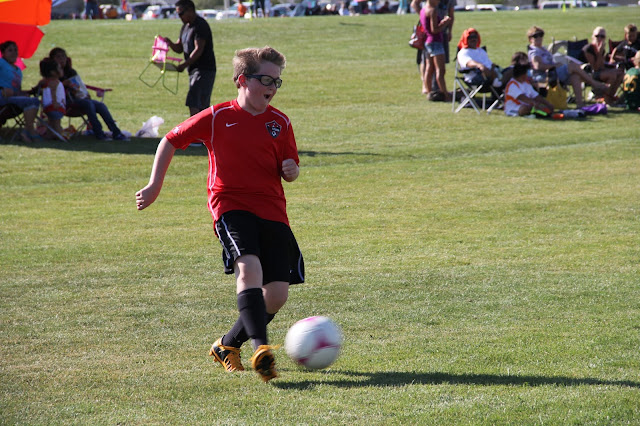 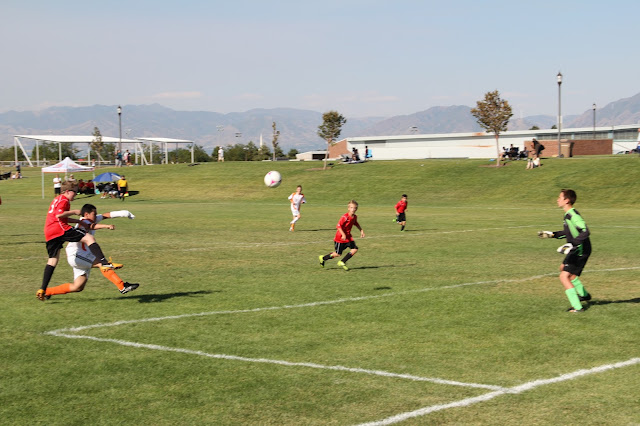 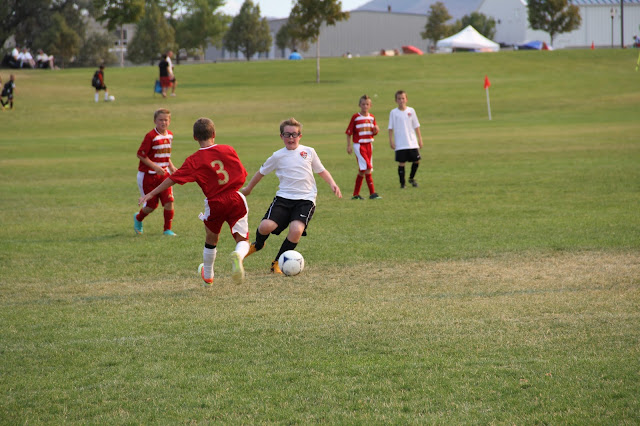 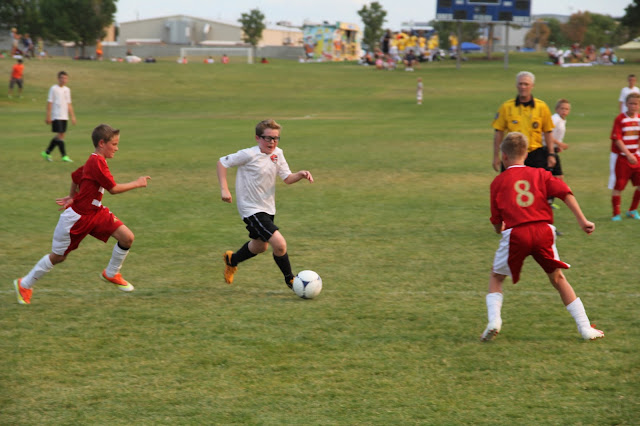 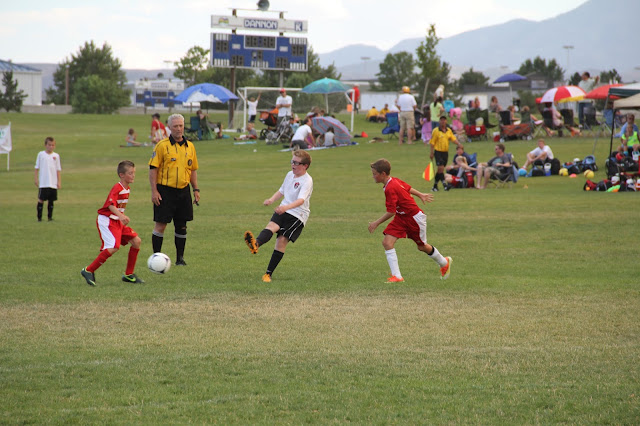 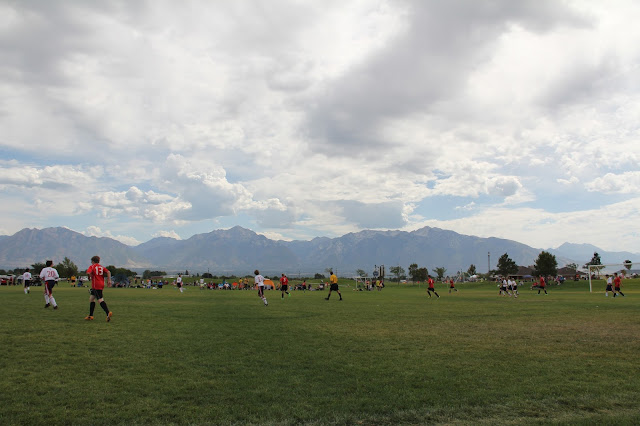 The 11:30 am semi-final game on Saturday morning was blessed with clouds and a breeze. Much cooler than the three previous game days when both Joel and Will were playing at 4:00 and 5:00 pm in 100 degree weather with only a few small shade trees for relief. Joel is lucky number 13.

Will's team was just organized this summer. After only one month of practices and only one scrimmage they set our to play. They are a U9 team but are playing up this year at the U10 level meaning the most of the other teams were older and had a year of experience under their belts. The first game they lost 7-0, the second game they lost 8-1, and third game they tied 3-3, with two goals and one assist from Will. It was fun watching the daily improvement of Will's team. 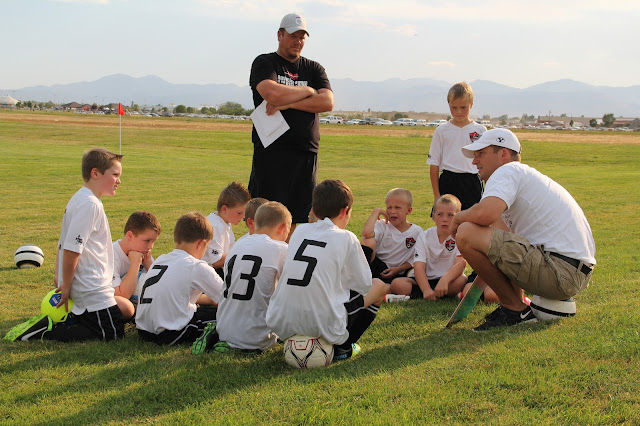 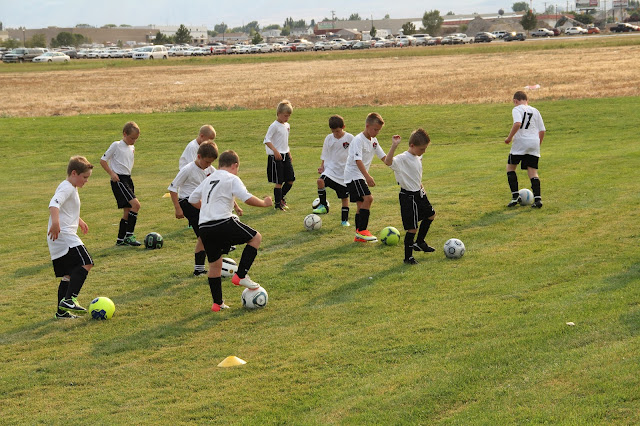 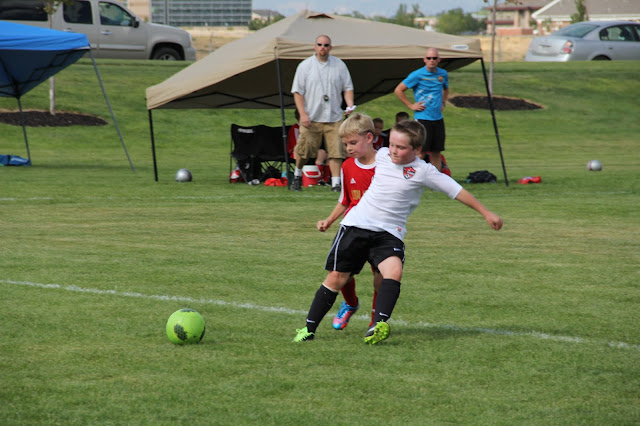 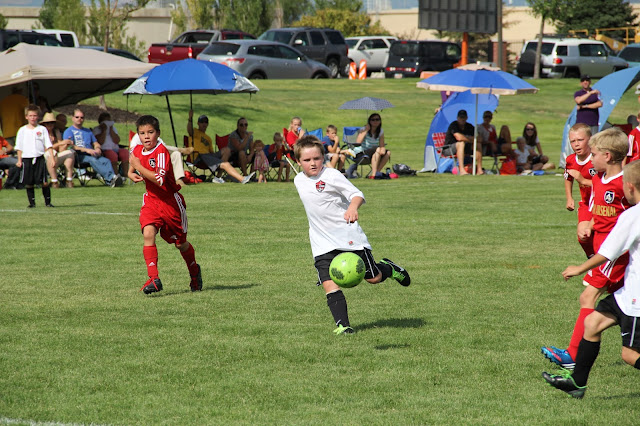 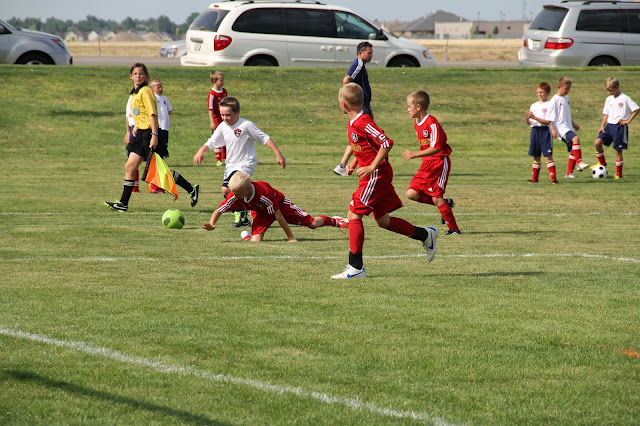 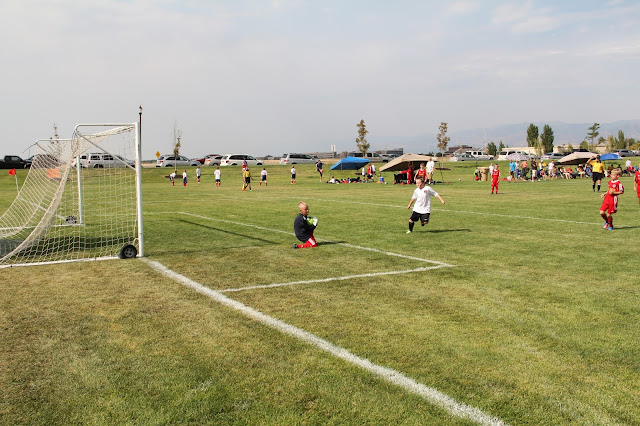 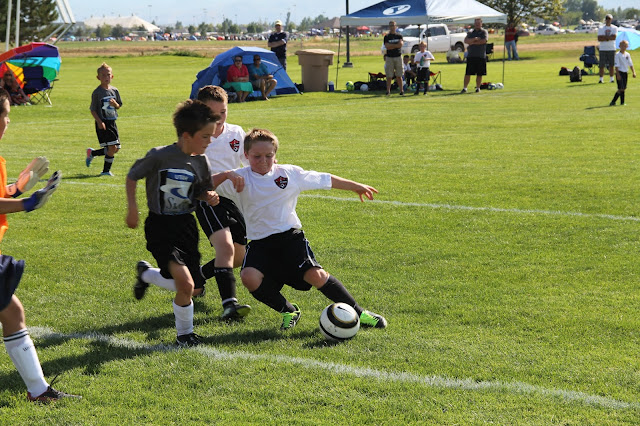 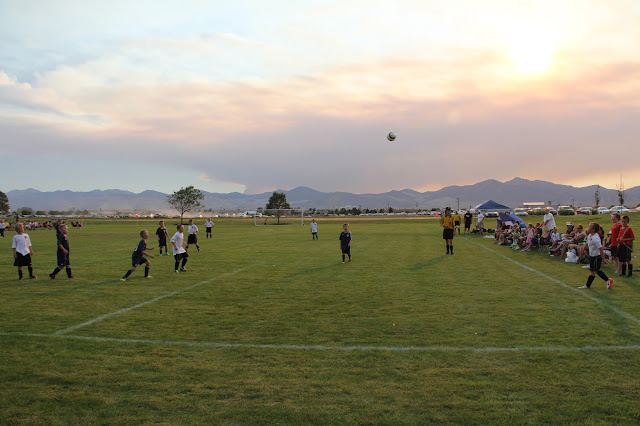 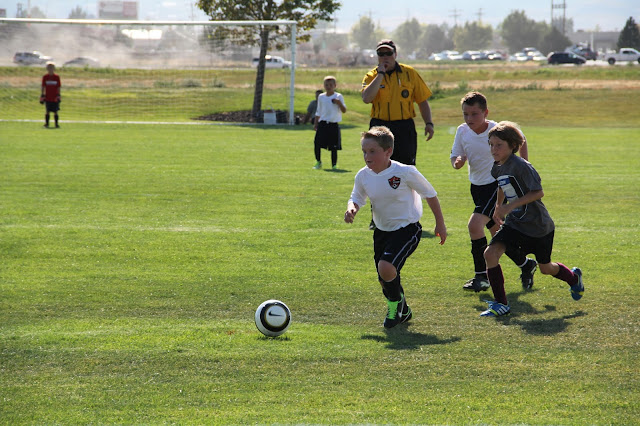 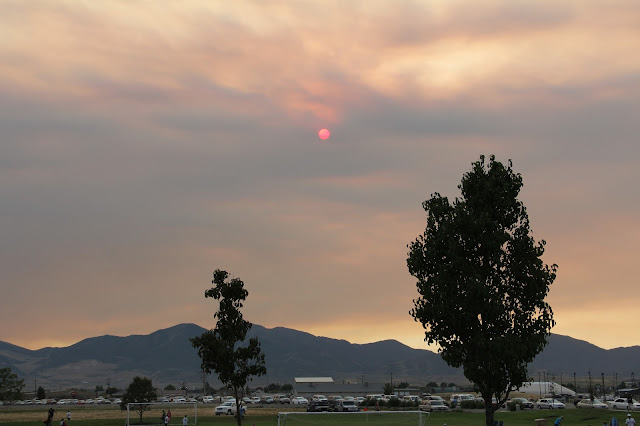 All week long a wild fire was burning in Skulll Valley, two valleys to the west of Salt Lake Valley. Ash clouds filled the air and turned the sun to hazy red. 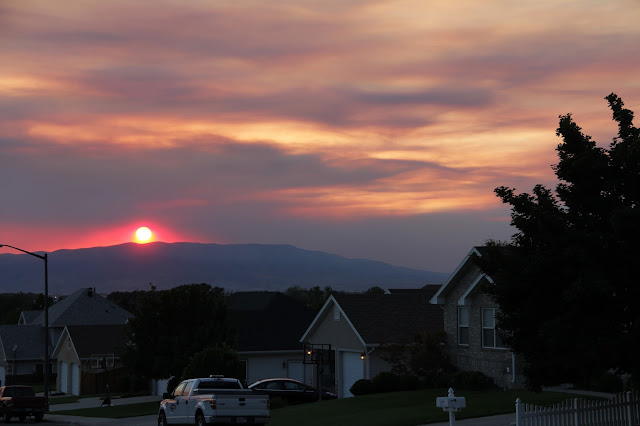 The ash haze sunset that evening from in front of our home. 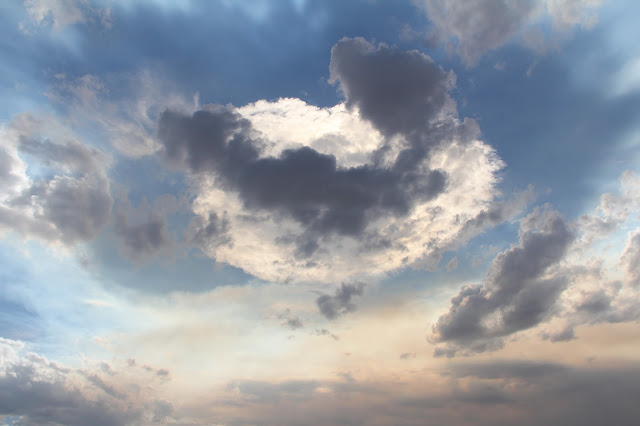 Friday afternoon clouds. The soccer fields were just south of the SLC municipal airport so there were plenty of planes coming in for landings and taking off just above us. 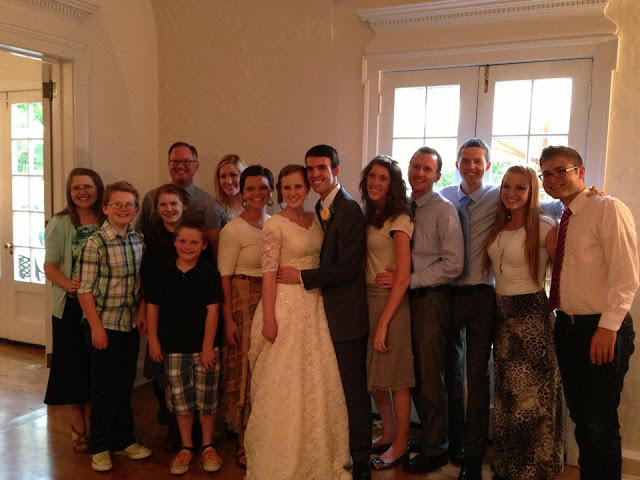 After the two games on Friday afternoon we went to Aunt Rachel's to change clothes so that we could go to a delightful wedding reception for Eden Jensen and Jared Colton at the Memorial House in Memorial Grove of City Creek Canyon in Salt Lake City. Eden and Jared are the sixth couple to wed from among the 80 students of the summer 2010 BYU Jerusalem Center.  I think that is a record for JC marriages. In addition to being able to see our Jerusalem friends (above) Marie and I knew family members on both sides from previous places (a cousin was my BYU TA, another cousin was in our BYU fall group, a grandfather was Marie's bishop in DC, and two aunts were friends from Marie's singles ward in DC) so we had a fun time visiting, eating and even dancing. 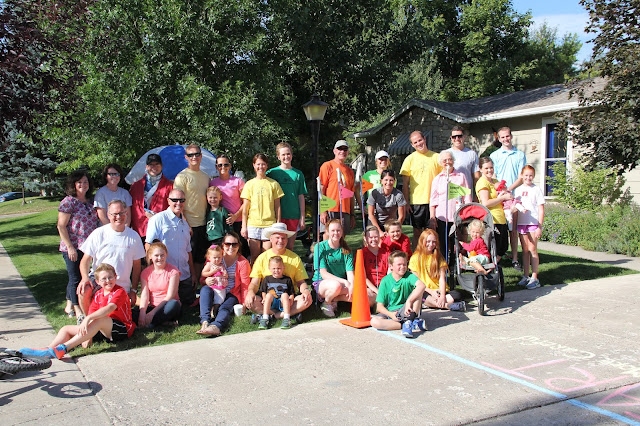 After the Saturday morning game we went to eat (Joel's choice) at Mezza Restaurant on 9th an 9th in SLC. It is one of our favorite places to eat. We all (not always the case) enjoy the pita, hummus, falafel, tabbouli, and fettoush. We then drove to Logan for the second annual family fun run. Organized by uncle Jake (white hat center) in support of Tom (third from left on back row in red) who broke his neck and clavacle in a bike accident three weeks ago. Some ran, others did not, then we all enjoyed dinner. A fun mini reunion with grandma Emmett, all six of her children and many grands and great grands.