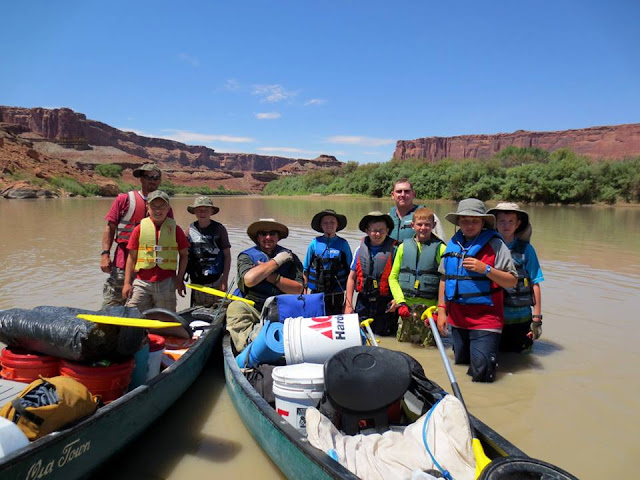 July 15-20 Joel and six other scouts, plus four adults (two scout leaders, a father and an EMT) set off on a 71 mile canoe trip down the Green River through Labyrinth Canyon to Mineral Bottom.  I had planned to go along, but had to pull out when Sarah's Surgery was scheduled for the Wednesday before the departure date. The first set of photos are how Joel saw the trip and then the later photos (which all included Joel) are Facebook posts by Barrett Raymond the EMT. 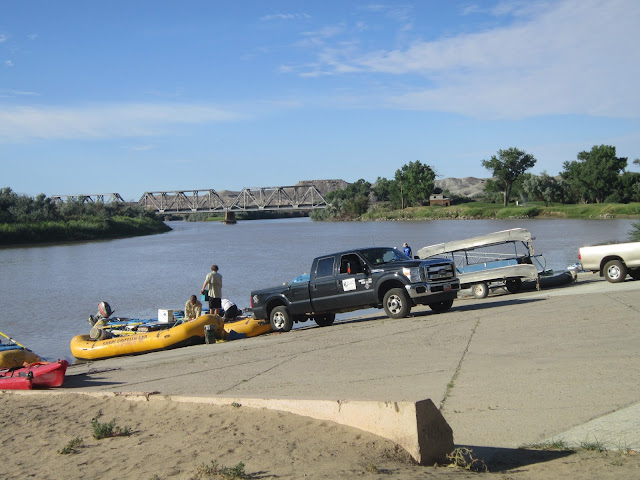 Putting in at Green River State park on Tuesday morning after a day of driving and shuttling cars to the pull out point. 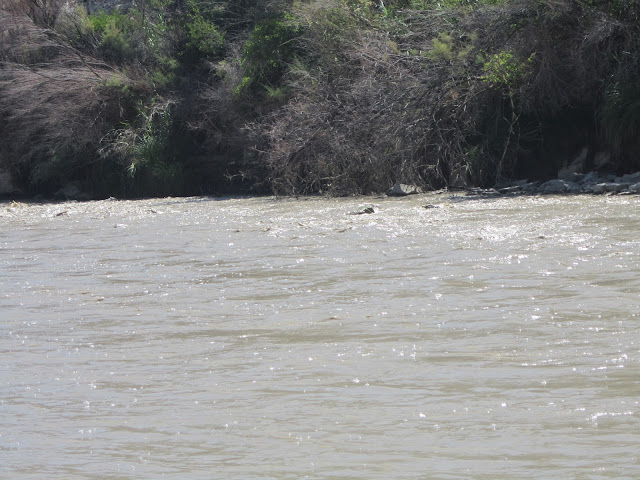 One hour down stream one boat capsized while trying to dodge these  rocks and avoid the overhanging branches. Lost in the capsizing were two fishing pole, celphone, GPS and camera of one of the leaders. 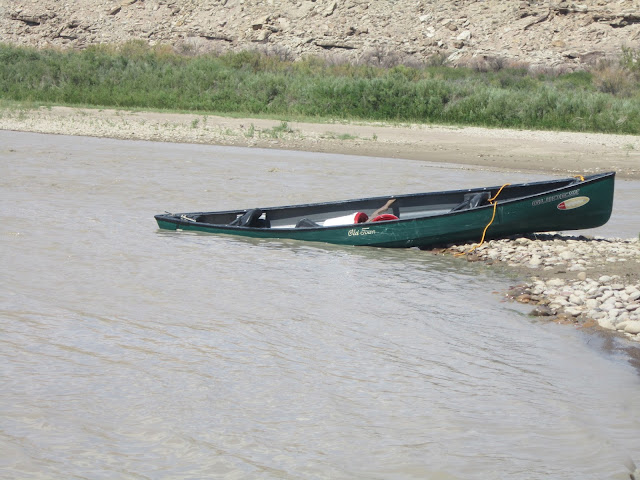 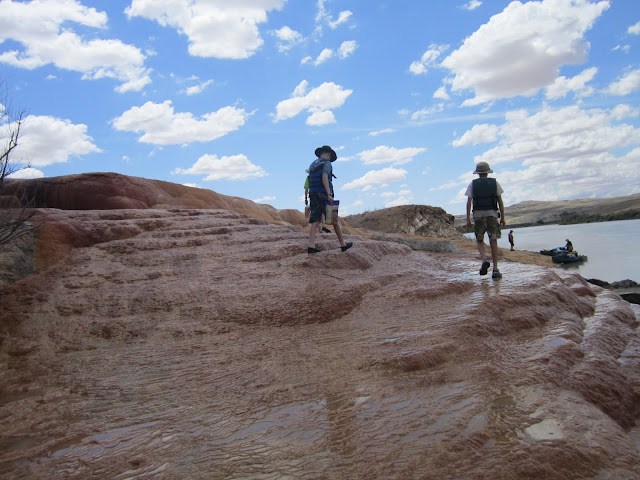 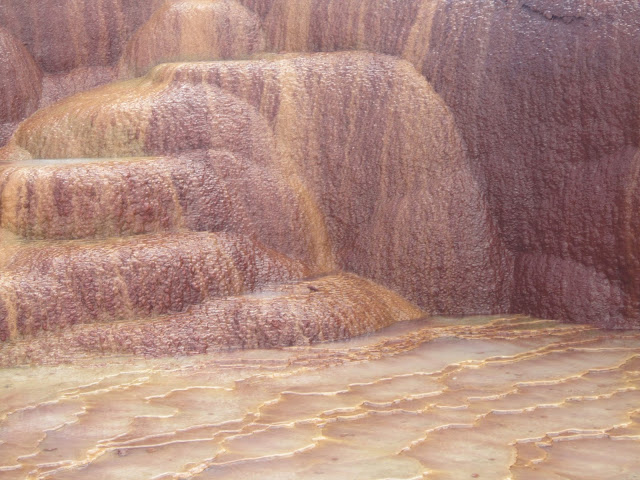 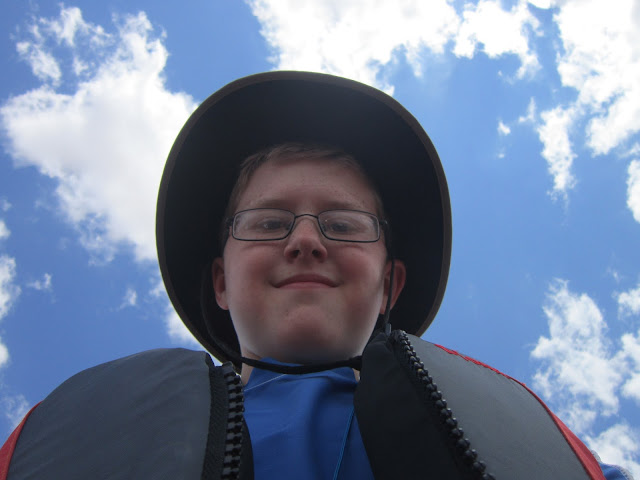 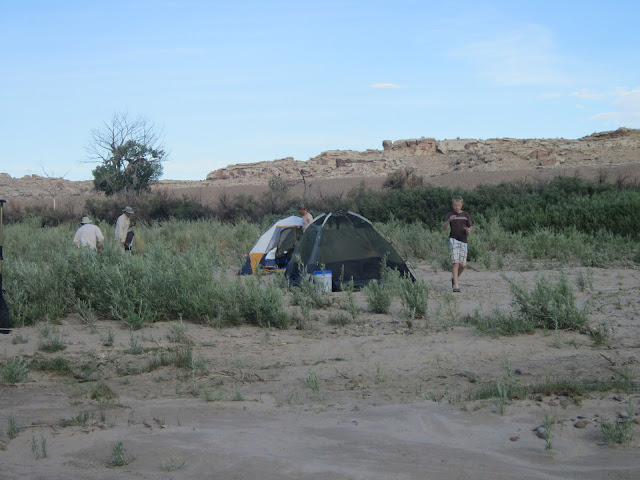 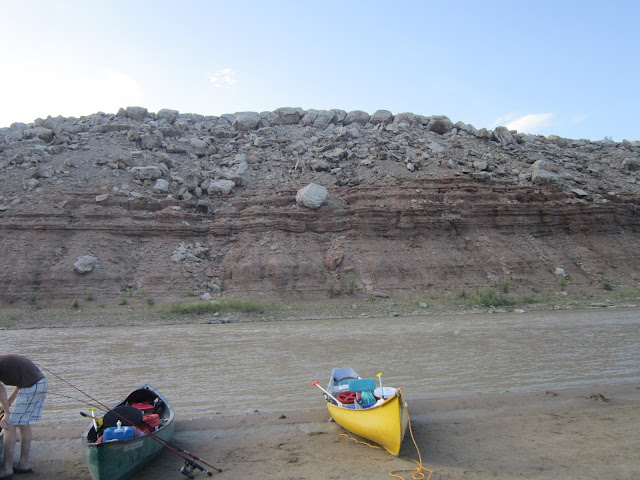 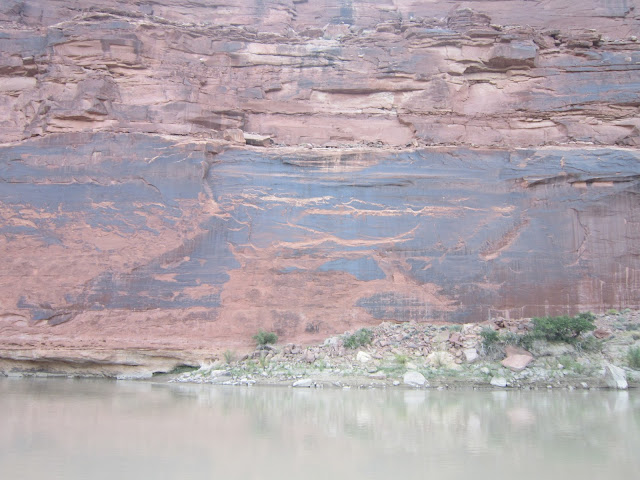 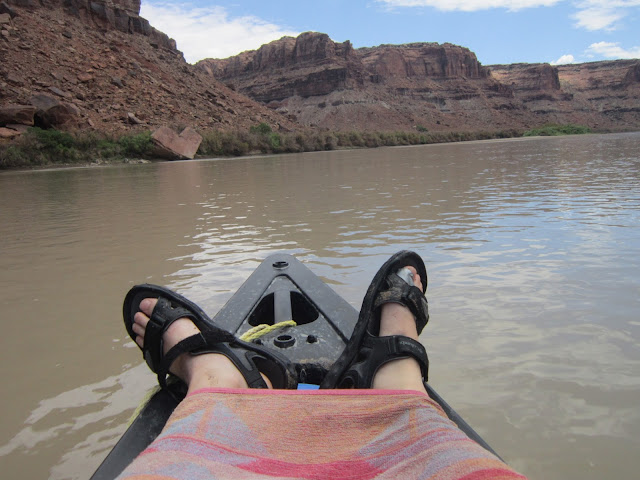 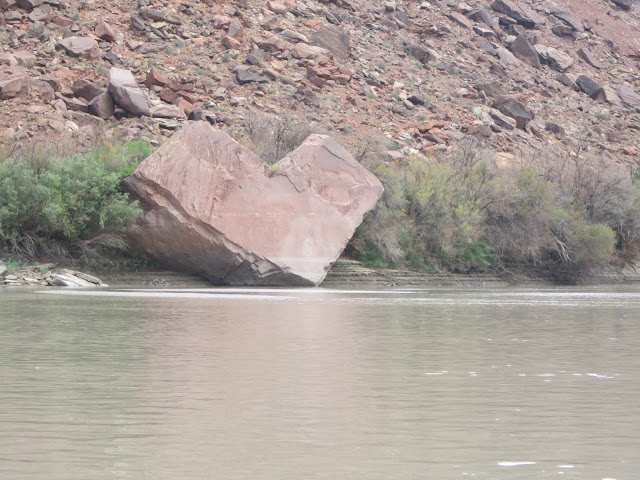 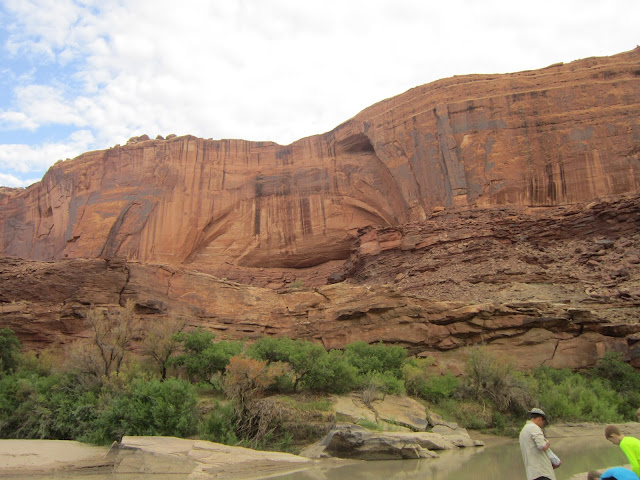 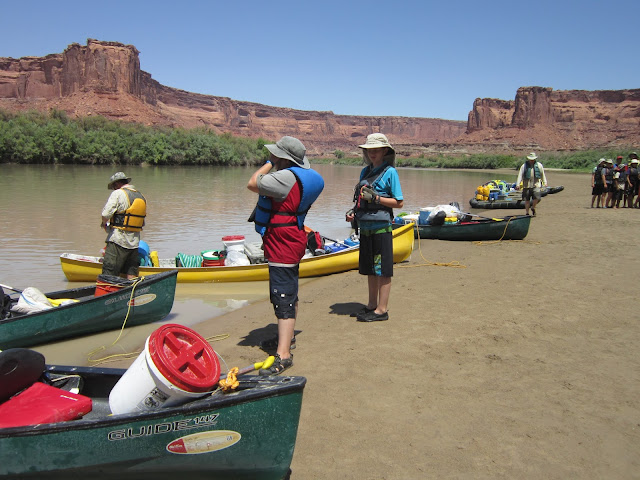 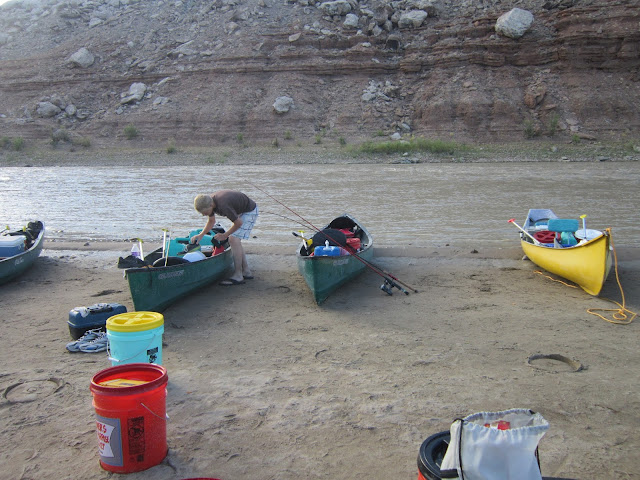 Barrett Raymond's photos (he was Joel's canoe mate for the whole journey): 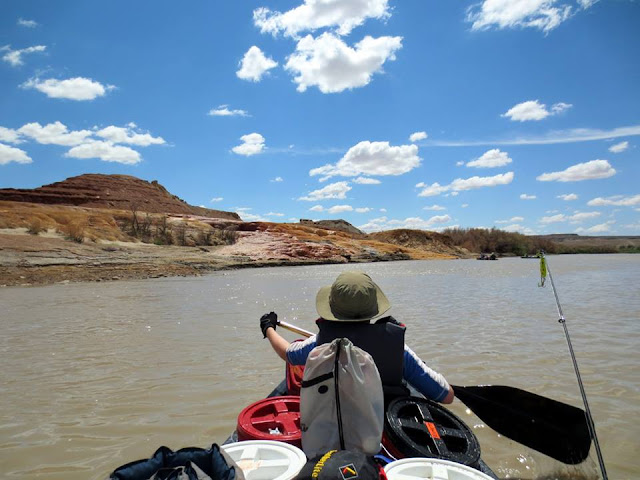 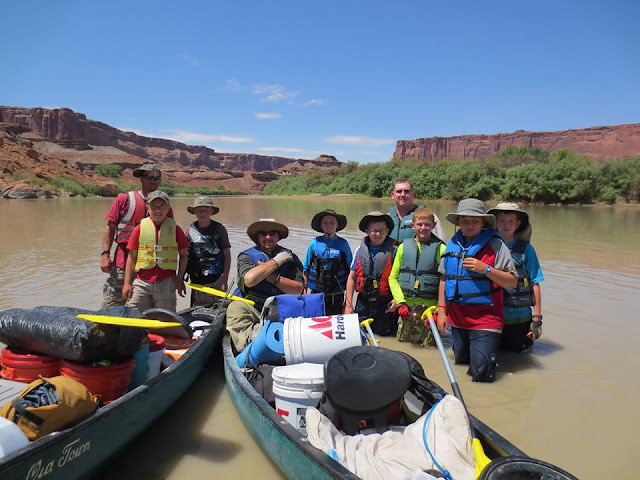 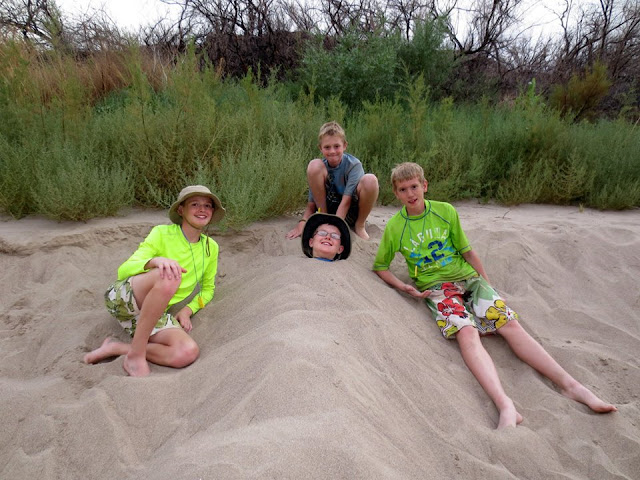 Jackson on the left is the one who jumped in to help gather up stuff after the capsizing. Unfortunately he had just cast out his line and in the melee he got hooked in his leg by his own hook. 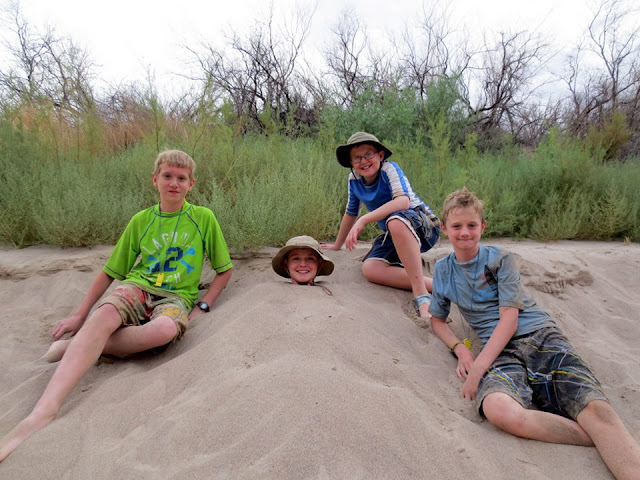 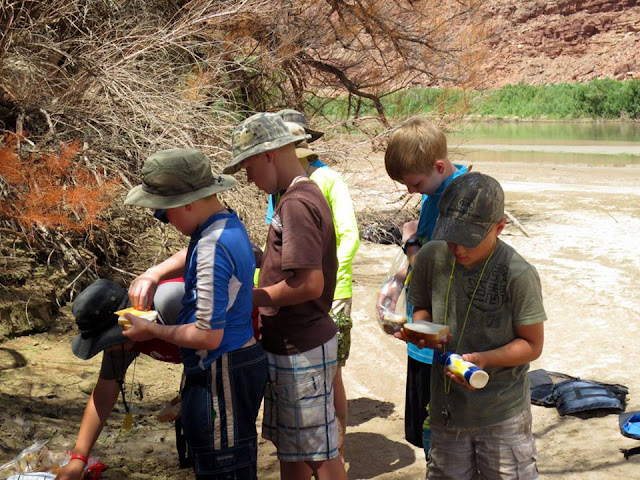 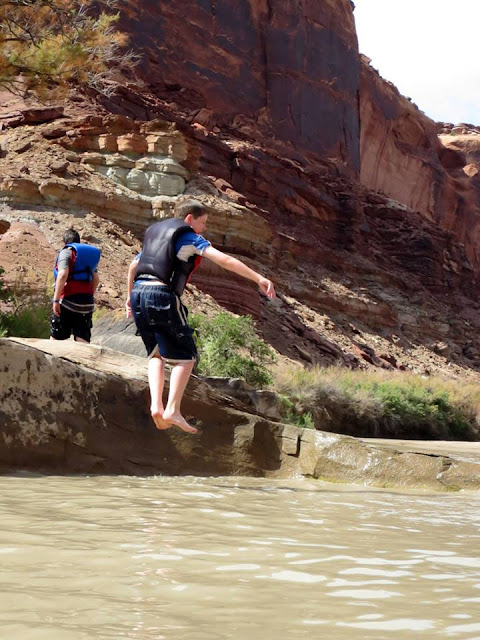 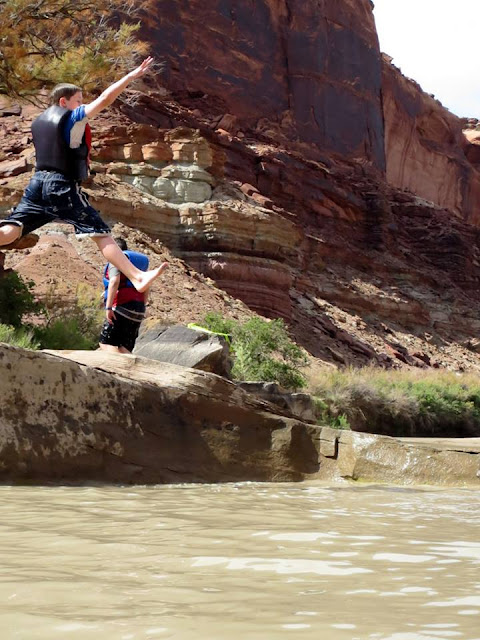 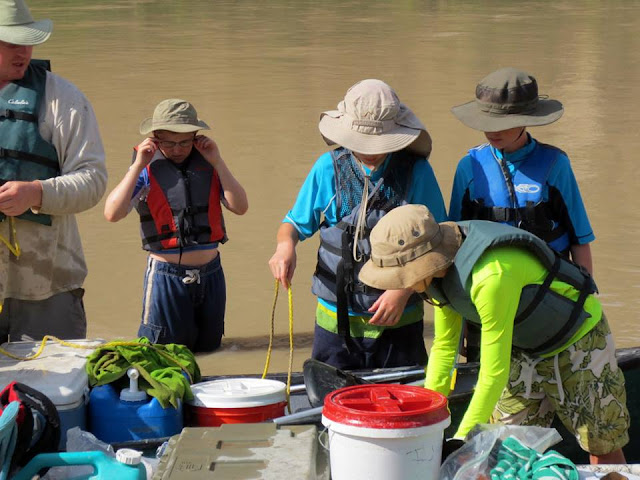 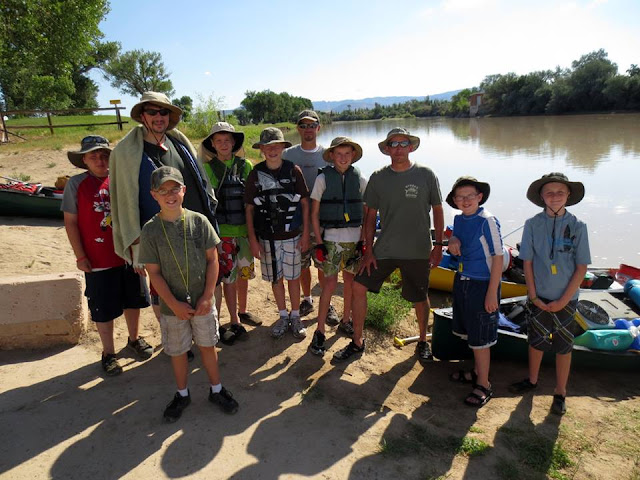 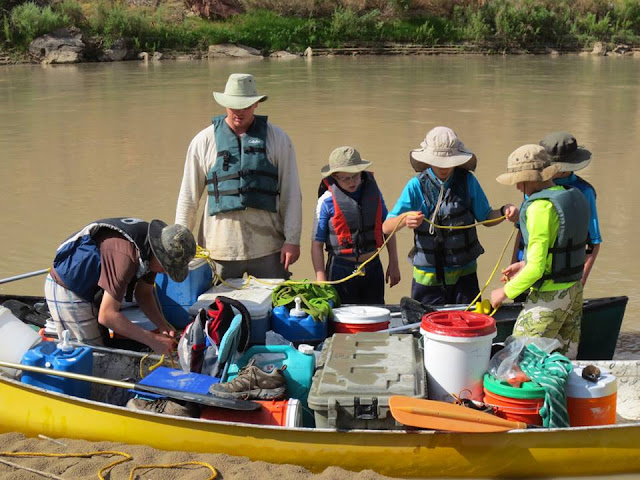 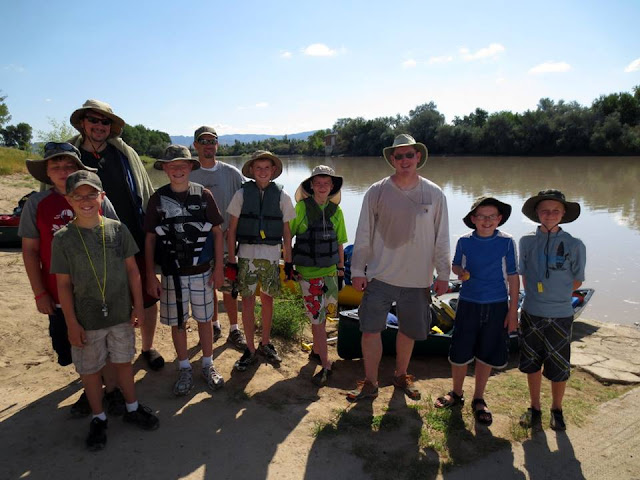 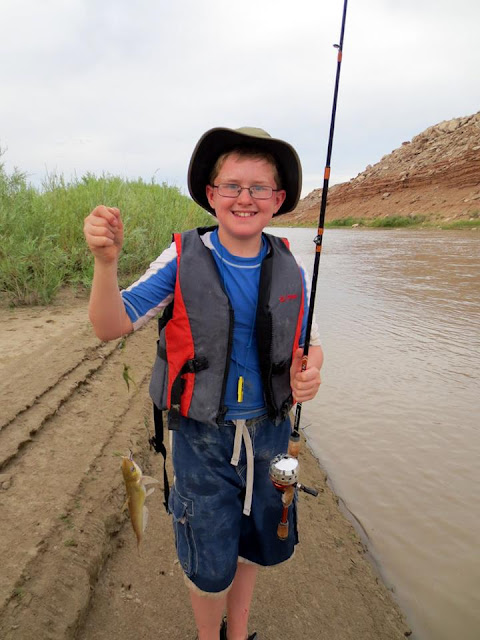 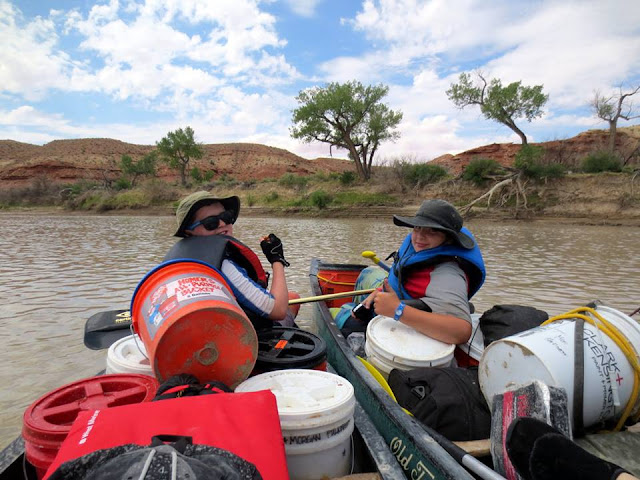 Thursday night Joel as asked to give a talk in Sacrament meeting this Sunday--his first as a Deacon. Brother Kauwe asked to tell about the trip and to include something spiritual. Here is what Joel came up with during our ride to and from Logan on Saturday for an Emmett family gathering. His parents helped with typing and wording and some of the ideas. He did a great job giving the talk and people even laughed at his jokes.

Last month our scout troop spent five days on a canoe trip.  Our group included 7 boys and 4 leaders.  We used the canoes that were bought with money from the ward yard sale.  We started at Green River and went 71 miles through canyons and rock cliffs.  It was a long hard trip and when I first got back I didn’t have much good to say about canoeing. The day after I got back, I had to write a letter for my extended Emmett family newsletter and when my dad read what I wrote about the trip, he made me start over and be more positive.  Now that we’ve been back a while, I realize how fun it was.   Today I want to tell you about some of the things that I learned on the trip.

First of all, I really like my mom’s cooking.

Second, sometimes in life you get really lucky and don’t have to carry the port-a-potty in your canoe.

Third, I tried fishing for the first time and --  Brother Kauwe, I don’t think I’ll ever be as good at it as you.

Fourth, it’s important to always be watchful even when things seem to be going smoothly.  Just about an hour after we started the canoe trip, we were going through a little bit faster water and one of the canoes which was trying to avoid a rock, ran into some trees branches on the side of the river and capsized.  We weren’t prepared for that and some things in the canoe which weren’t stored properly at the time sank and were lost.

Fifth, when someone does capsized or is in trouble, we should be willing to help.  Jackson Chambers was a good example of this on our trip.  When the canoe capsized, Jackson jumped out of his canoe to try and save some of the stuff floating down the river.  Unfortunately, he had just cast out his fishing line and so in the process of helping he ended up with a fish hook in his leg.  He had the right idea though and so all of the scouts agreed that Jackson should get his fishing merit badge for catching himself.

Sixth, even when things are hard, know that there is always something good to look forward to.  One of my favorite things during the trip was swimming after canoeing the entire day. At our last campsite we found a rock that we could jump off.  Our leaders wondered where we got the energy to climb and jump but really it was relaxing to not to be paddling and it’s definitely one of the best memories I have from the trip.

Seventh, teamwork is really important and everyone has to do their part.  There were two people in each canoe and we found that if we wanted to go anywhere, we both had to paddle.    Everyone on the trip worked hard to make it a success.  Some were cooking specialists, some were fish hook extracting specialists, others pitched tents and loaded boats.  My specialty was rinsing off the toilet seat in the river each morning.

Finally, at one of our nightly devotionals Brother Tull shared the following scripture with us:

Helaman 5:12
12 And now, my sons, remember, remember that it is upon the arock of our Redeemer, who is Christ, the Son of God, that ye must build your bfoundation; that when the devil shall send forth his mighty winds, yea, his shafts in the whirlwind, yea, when all his hail and his mighty cstorm shall beat upon you, it shall have no power over you to drag you down to the gulf of misery and endless wo, because of the rock upon which ye are built, which is a sure foundation, a foundation whereon if men build they cannot fall.

On our canoe trip we were surrounded by rocks of every size, shape and color and these rocks were a great reminder of the role Jesus should play in our lives.  If Jesus is our foundation then we will be vigilant, we will cooperate with each other and work together, we will help others, we will look for the positive in things, and through our Savior Jesus Christ we will not only be saved from capsized canoes but from all the other challenges we face during our life.

I’m grateful that we were protected during our canoe trip.  I’m grateful for good leaders and friends that help me learn and grow.
I know that Jesus is my rock and my salvation.

I say these things in the name of Jesus Christ amen.