One of the things we as parents are trying to instill in our children is kindness to others and a desire to serve others. Knowing when and how to serve is not always an instinctive thing. Some people seem to get it and others don't. I talked to my 86 year old mom the other day and she told me of her driving to Richmond Utah to the grave side service of a childhood friend. The place where she parked was quite a walk across a rough, pock-marked lawn to where the burial would take place. Mom, who is slowing down, was able to walk there on her own, but at the end of the service she was a little dizzy and the walk back to her car on unsteady legs seemed more than she could do. Perhaps it was her snow white hair that tipped off the kind daughter-in-law of the deceased, or the fact that she was extra aware, given the circumstances at hand, of the fragility of people her mother-in-law's age, or perhaps she had been properly taught to be always on the look out for ways to be kind, but whatever it was, before mom could get very far she hustled over and offered mom a steadying arm. In former years there would have been no such need, but on this day there was a need and mom gladly accepted the help.

This is a story I could relate to. During the winter semester of our stay in Jerusalem, Marie and the kids were able to join in on the field trip to Jordan (see more at this blog post: Jordan Field Trip). I was excited that they would all be able to see magnificent Petra. The field trip always started out early morning (6:00 am) and was non-stop walking until boarding the bus later that afternoon at 3:00. Petra in April is hot and dry and as usual we all packed in large water bottles. And as usual mom and dad became the "haulers of water" for Sarah, Joel and Will. I was also the hauler of cameras, snacks, transmitters and headsets, sunscreen and other sundry things. I was also the hauler of Will. He was five years old and a pretty good walker, but there were times when he needed a lift. I piggy backed him part way up the 800 red rock steps to the monastery.

The guided tour ended before lunch and so for the last few hours everyone was able to go explore in smaller groups with the strict edict to be on the buses by 3:00. That meant that between 2:00-2:30 all 80 students and faculty families began the long trek back out. As we walked we ran into other groups and then other groups until there was quite a stream of BYU folks meandering along the hot, sunny, sandy valley floor. Will really wanted a piggy back ride and I really wanted to give him a ride, but I literally just didn't have the strength to do it. Tired Will kept pestering me. I told him that if he could just wait until the shaded part of the trail in the slot canyon called the Siq, then I would be able to carry him again. While this negotiation was going on between tired dad and tired child, various groups of students, including more than a few fit BYU men passed the slow moving Emmetts. By this point in the semester they were great friends with our children, particularly Will. They loved to play with him and even piggy back him when it seemed like a fun thing to do. But on this day those who passed were perhaps too tired (not likely) or perhaps too oblivious (more likely) to two people in need: Will in need of a lift and me in need of not giving a lift. And then she appeared, Megan Greer, my guardian angel, my good Samaritan for the day. Perhaps as she approached us from behind she had heard Will's denied request for a ride, or perhaps she thought about tired parents who had been carrying a heavier that usual load throughout the day, or perhaps she had been taught to think of others and to always be on the watch for ways to serve. For whatever reason, she came up to us and asked if she could give Will a ride. I could have cried. Will was a bit reluctant, but he soon agreed to climb on. Megan carried him a few hundred yards and then Will was good to go it again on his own. For the final stretch the kids all got to ride horses, which were provided as part of the entrance fee. We even arrived back before the appointed time, which allowed us all to have a refreshing ice cream bar.

I will always remember Megan Greer and the good gift she gave. 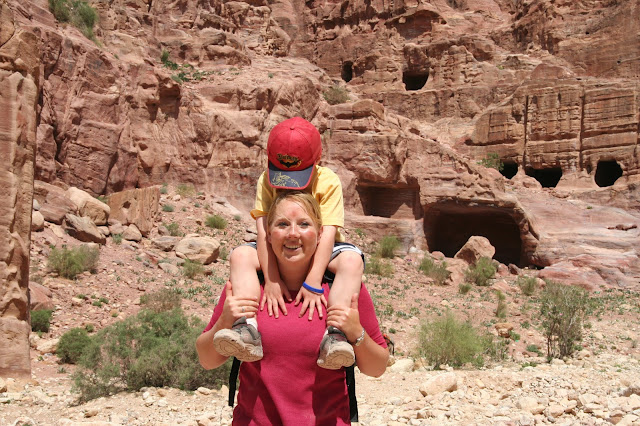 Megan Greer piggy backing Will (in his favorite Batman hat) at Petra.