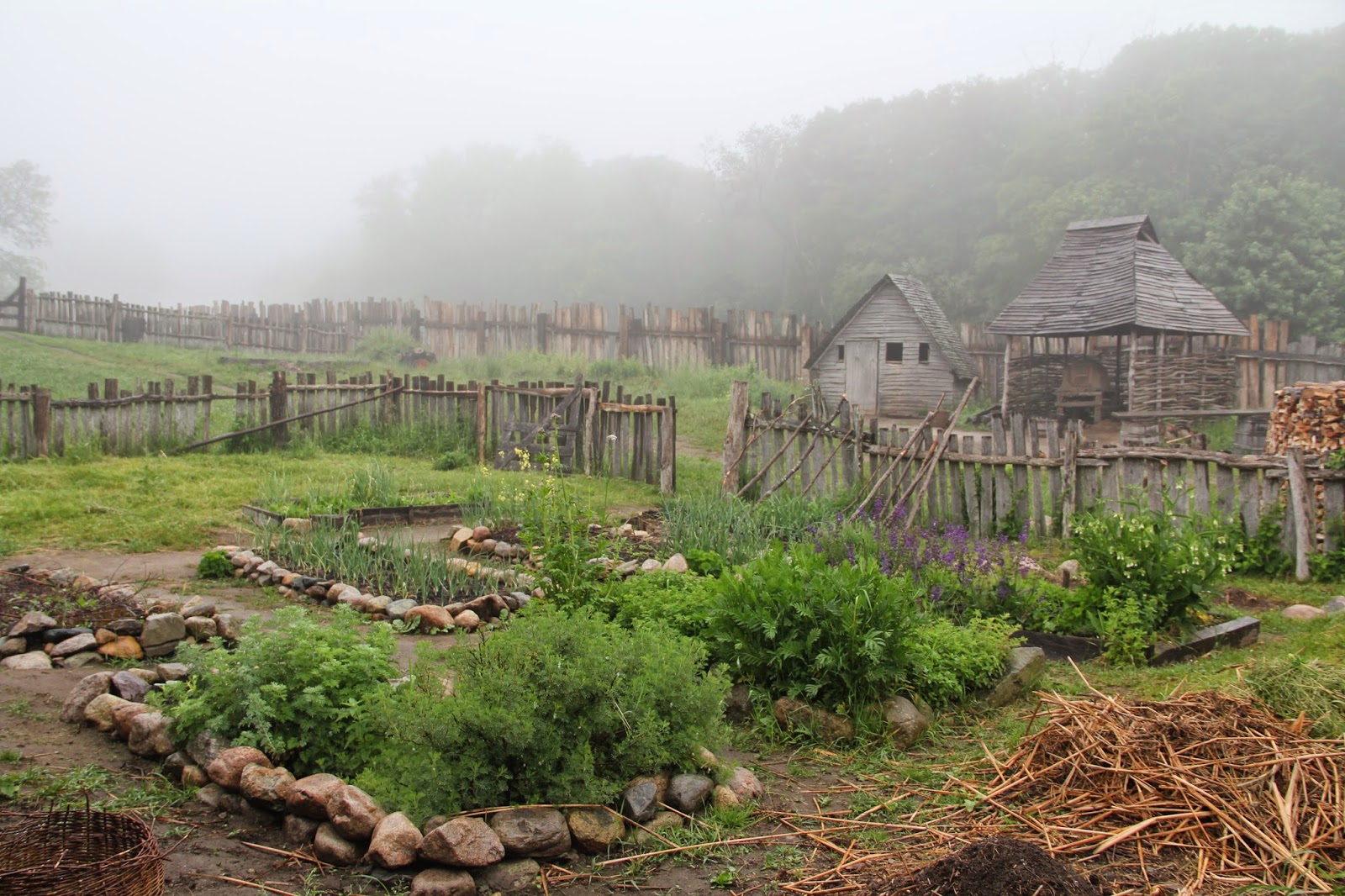 Today was a very rainy day in Massachusetts, but we didn't let that stop us. Marie's sister Betsy joined us (and even drove since she knows the local roads and we have had our fill of wrong turns and wrong roads). Our destination for the day was Plimoth Plantation south of Boston. 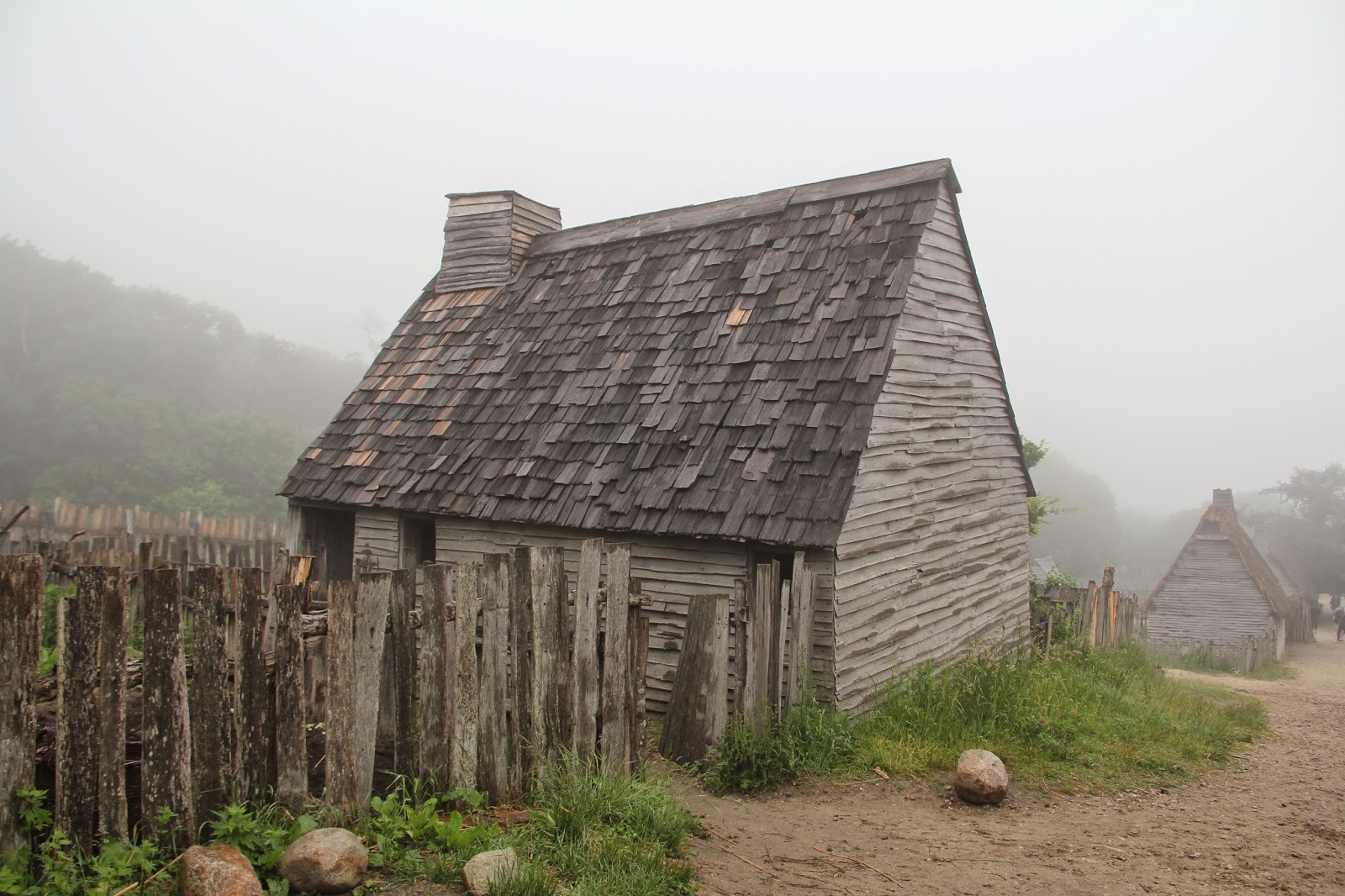 The village is a replica of what Plymouth looked liked in 1627, seven years after its founding. The settlement is peopled with modern actors who play the role of being a 17th century pilgrim of Plymouth. The second house we visited was that of John Alden and Priscilla Mullins--16th (or some huge number) great grandparents of both Maire and me. Both were on the Mayflower and married within a year of arrival in America 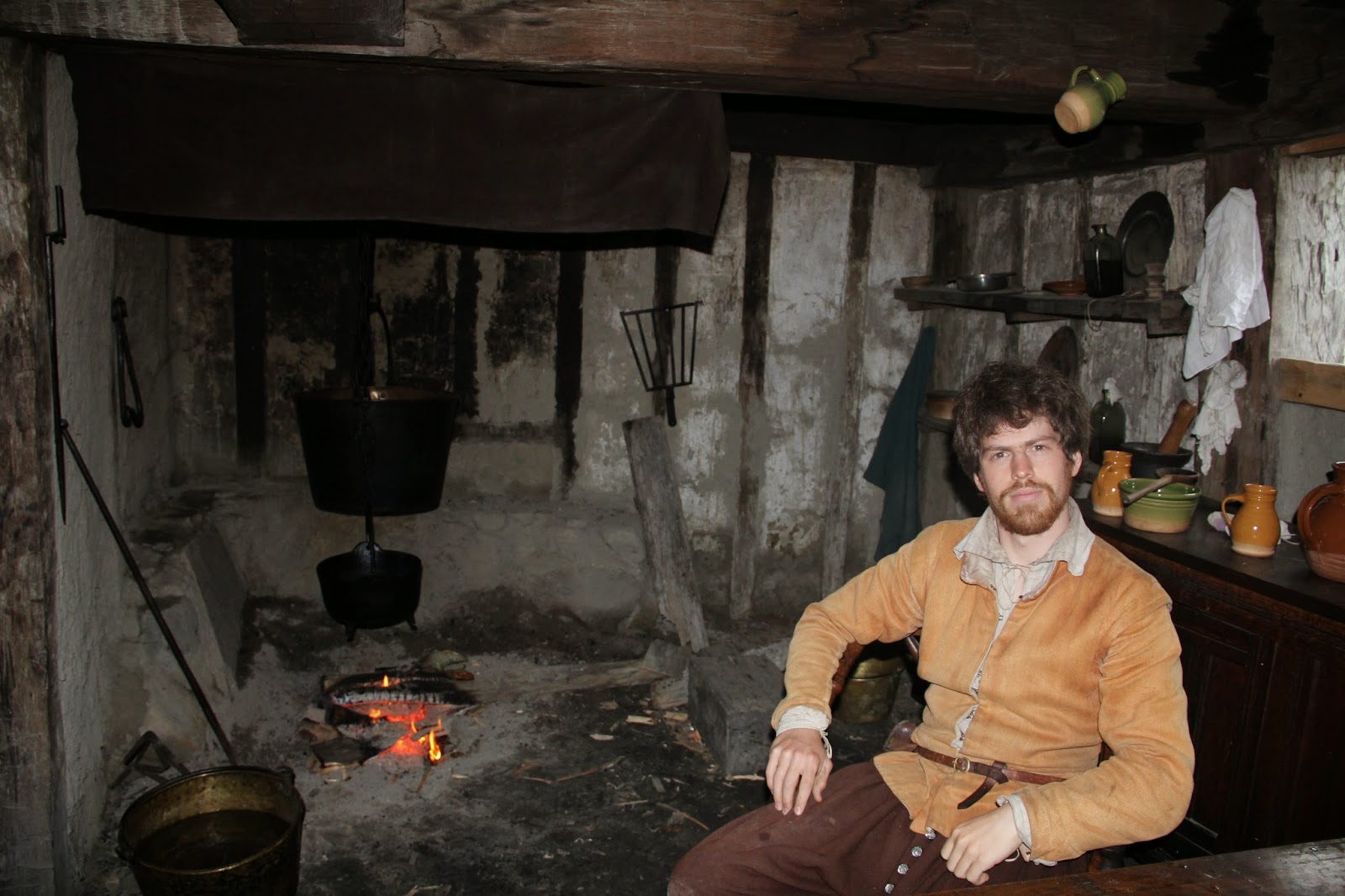 Here is the modern-day John Alden. I had fun asking him questions about when he and Priscilla got married, if they had children, what they did each day. After all the questions I decided to tell him that my interest stemmed from being a direct descendent of him. True to character he could not acknowledge that he had 21st century progeny. He did however note that he had an uncle that looked like me. 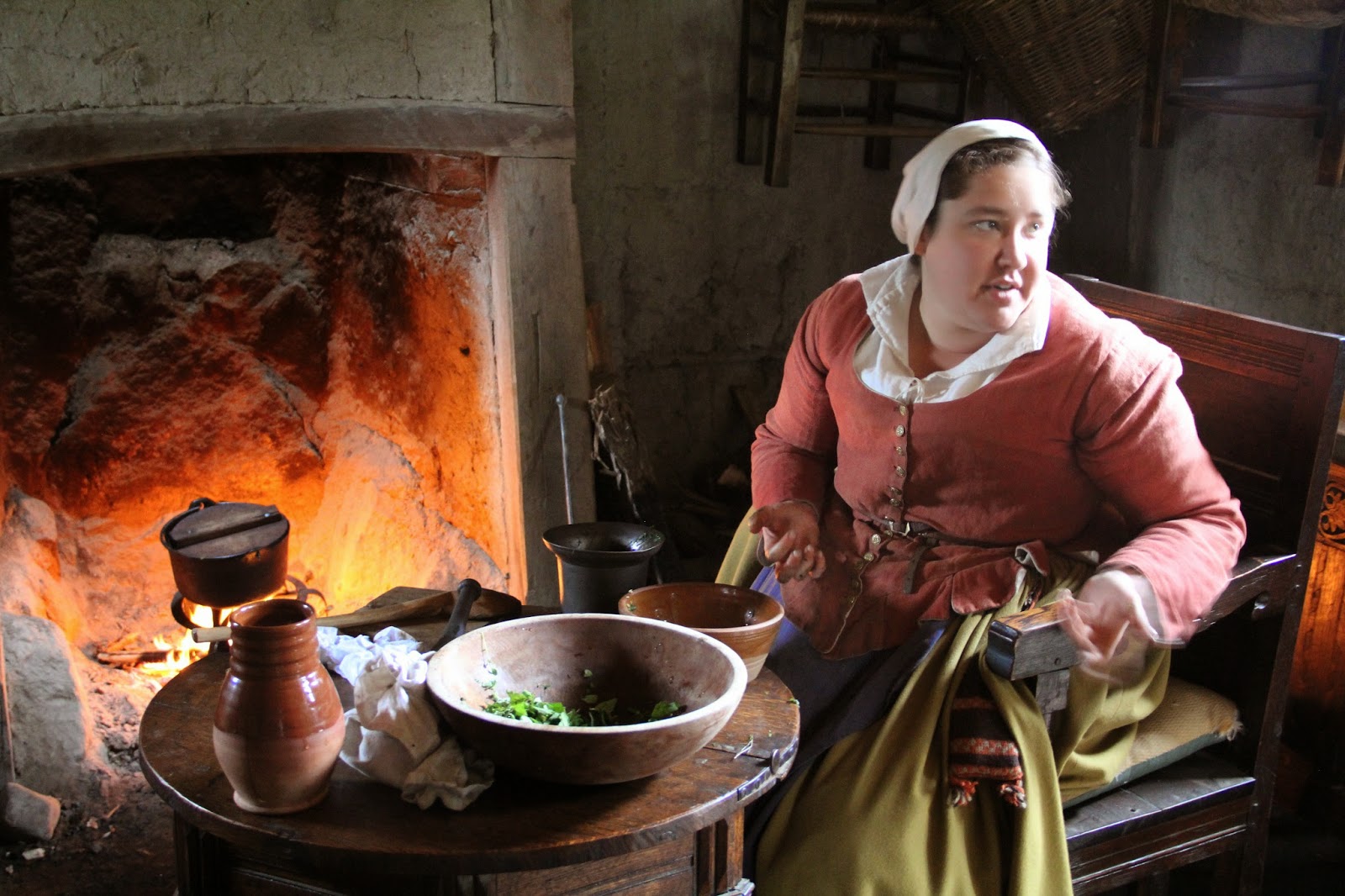 This pilgrim and her husband told us about the home grown herbs she was mashing to add to a porridge of oats. Her husband showed us his musket. 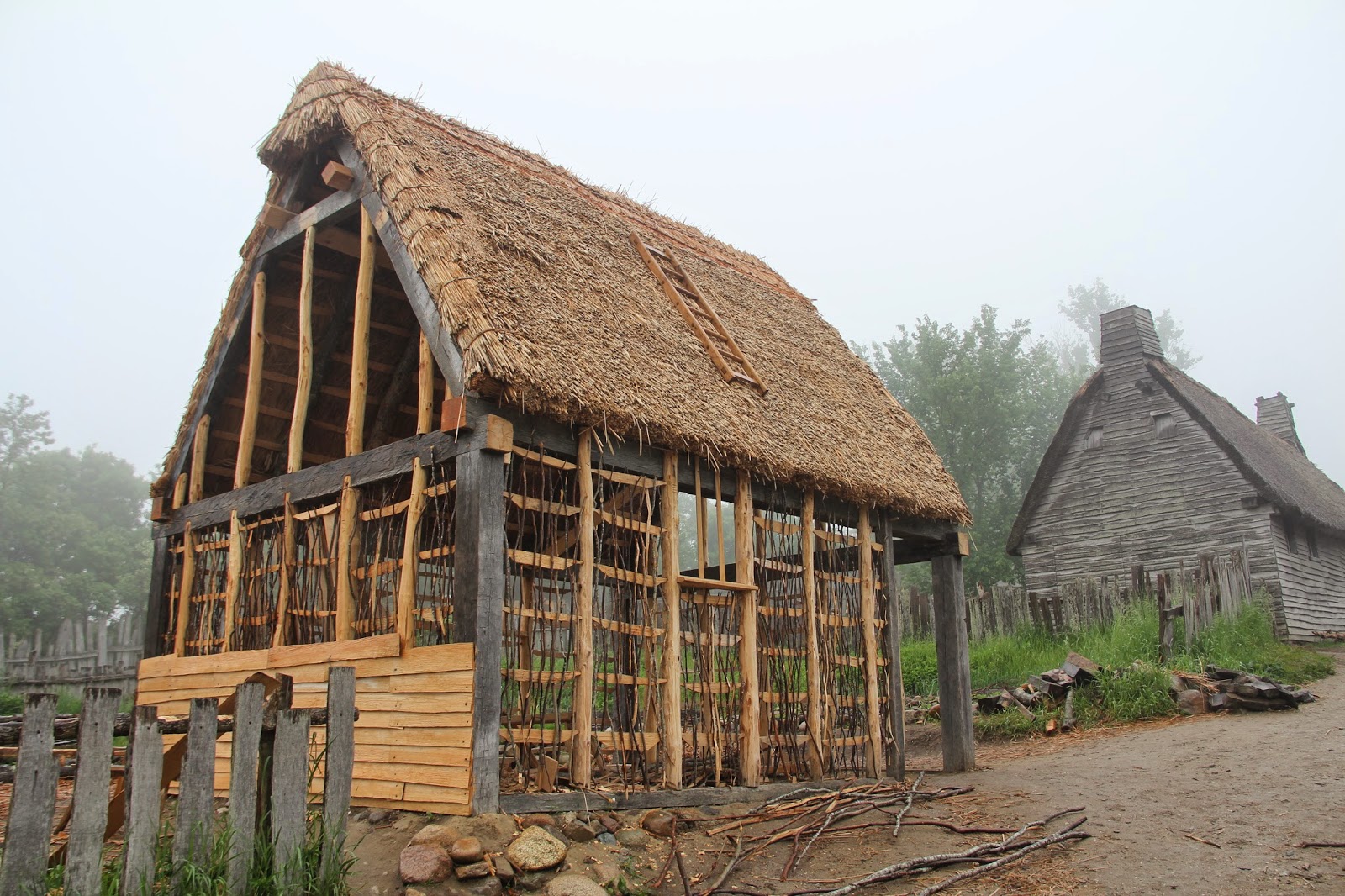 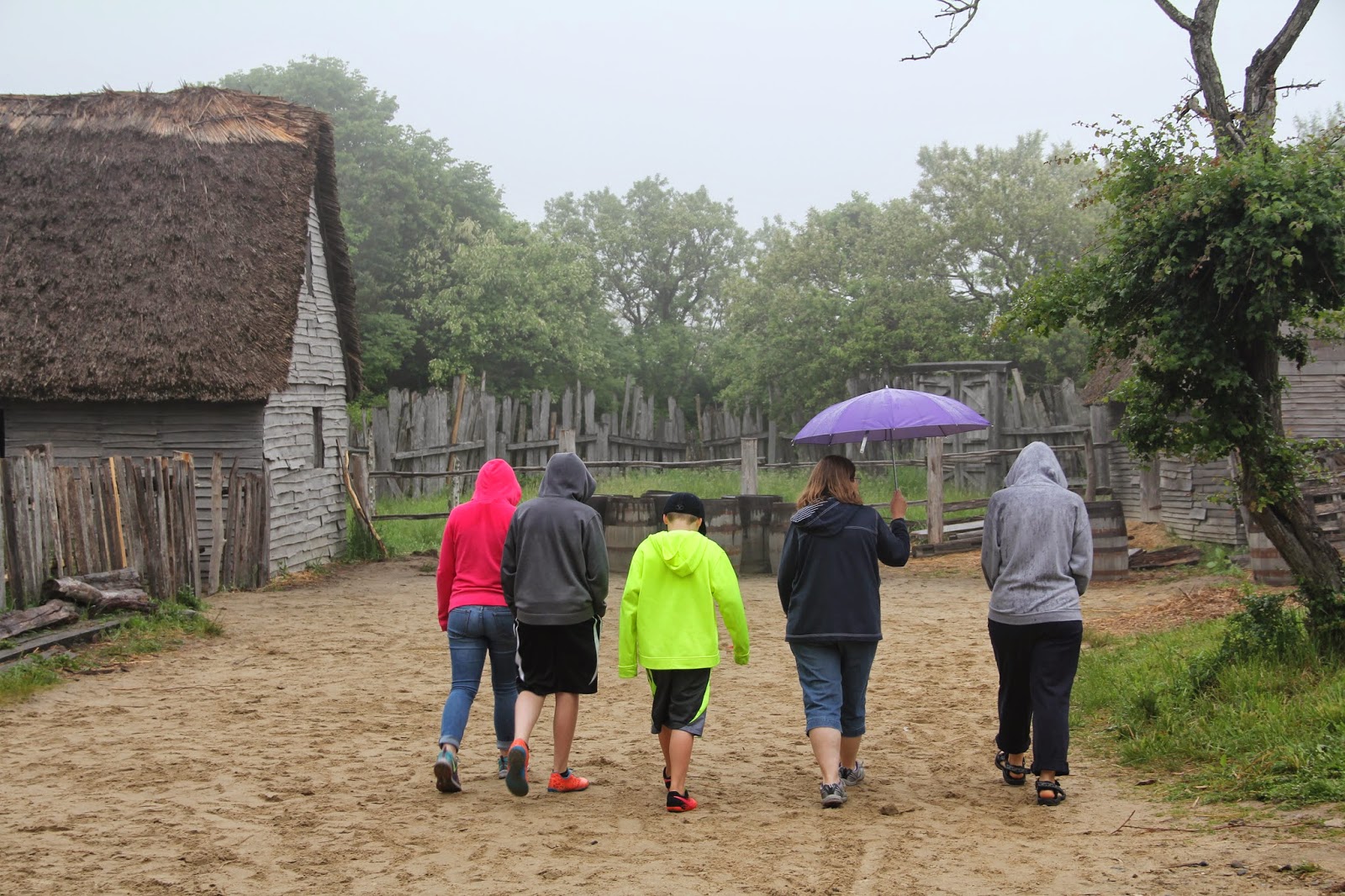 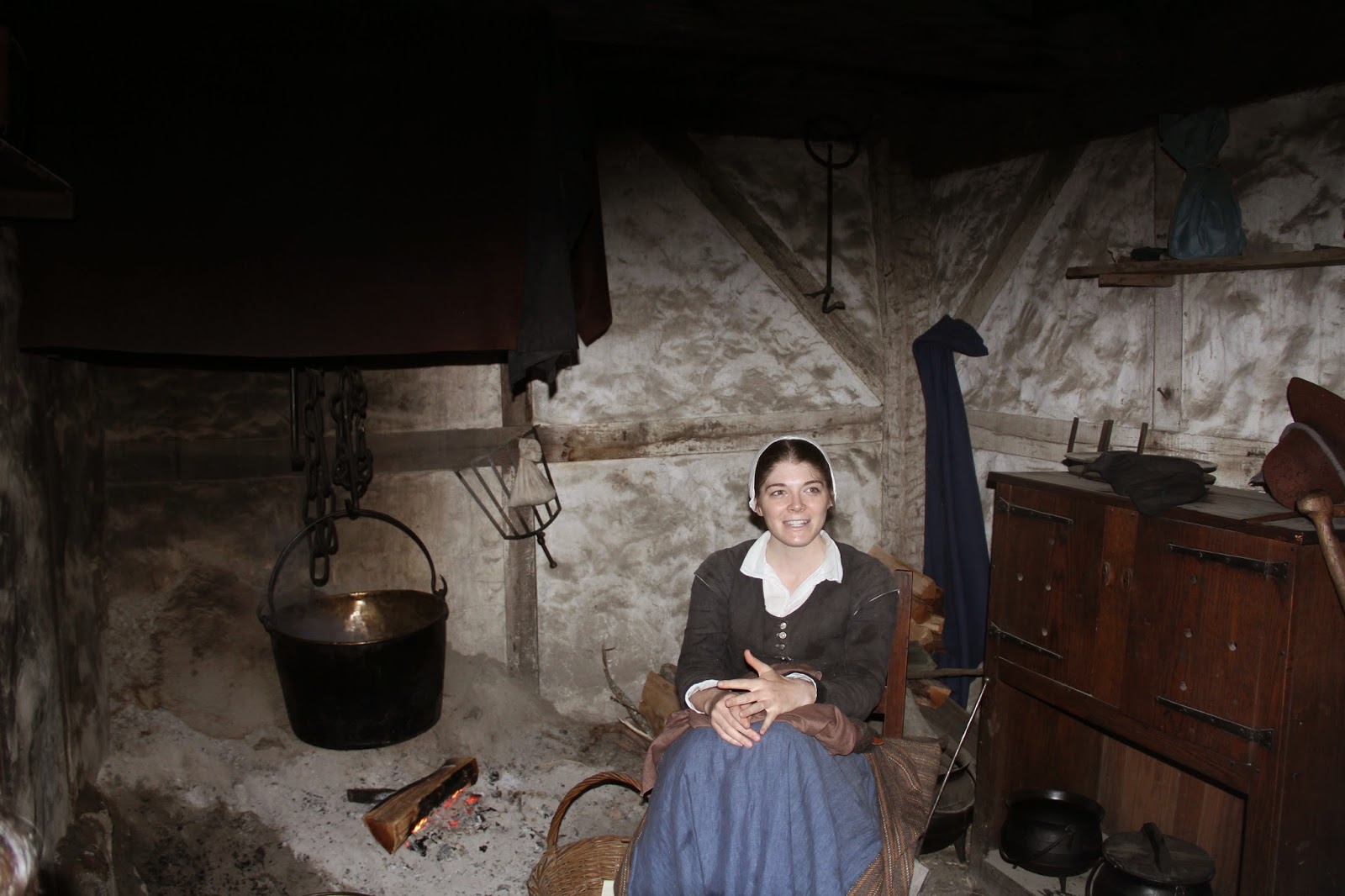 This young lady (the oldest of six daughters) arrived a few years behind her father who came to pave the way. They were not pilgrims, but joined the colony to seek better economic opportunity and to eventually own land. I asked what her favorite church hymn was and she sang us what she sang in her old church in England and then the new world Pilgrim version. She concluded with a favorite song for dancing. Sarah had a hard time getting used to idea of people pretending to be someone else and always staying in character, but in the end she asked some good questions too. 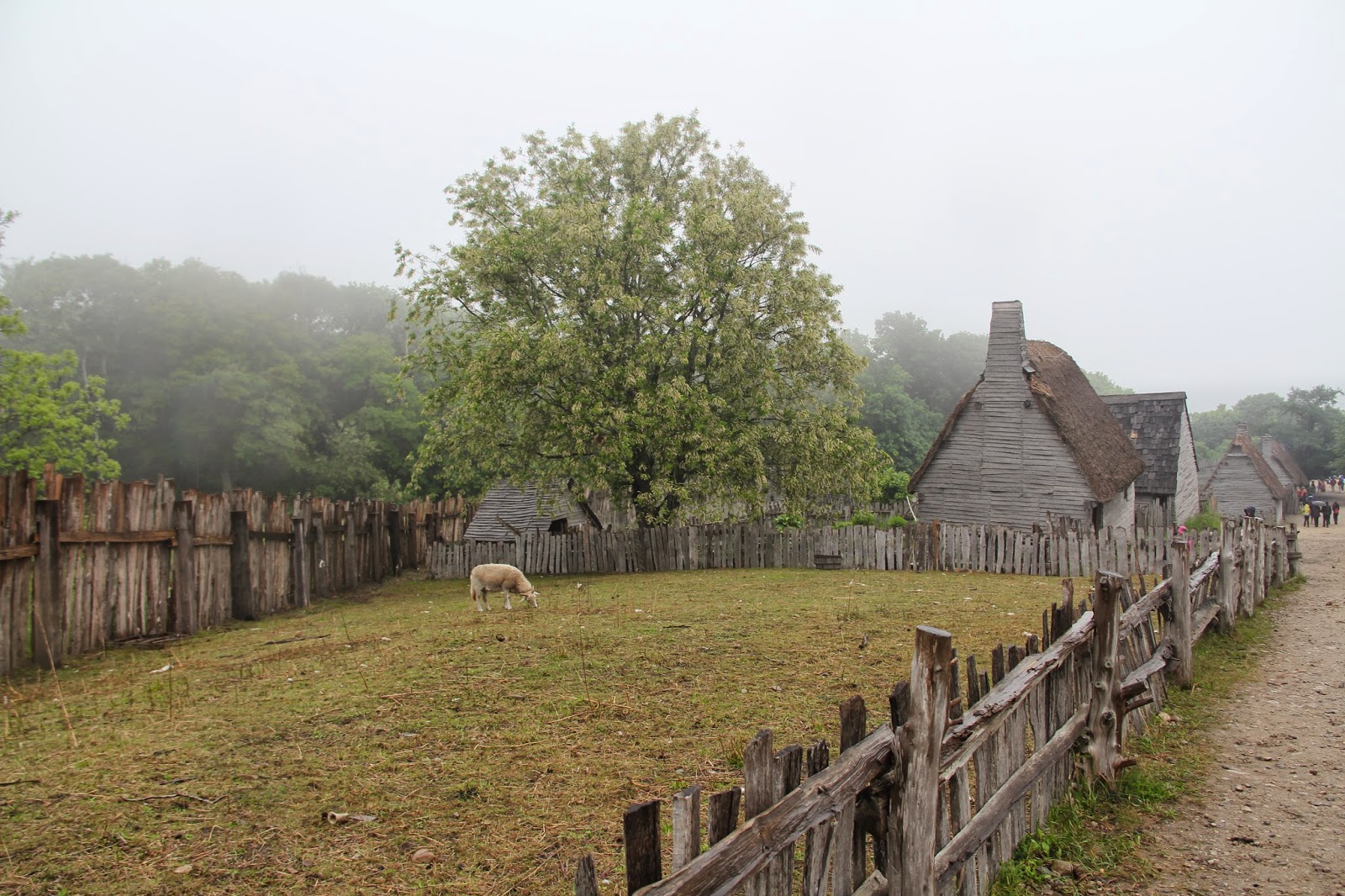 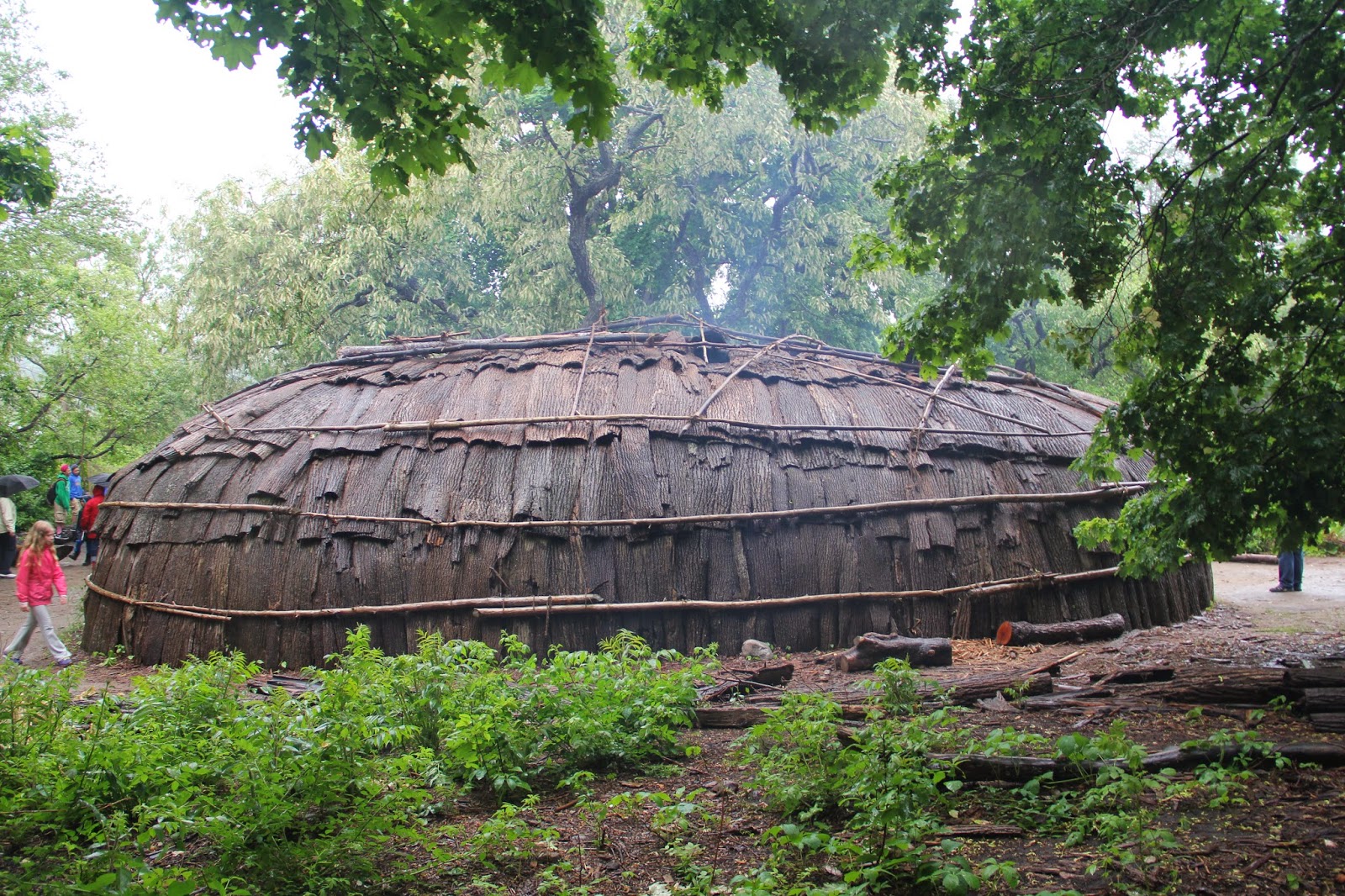 We briefly stopped at the Wamapanoag village with its large wigwam. 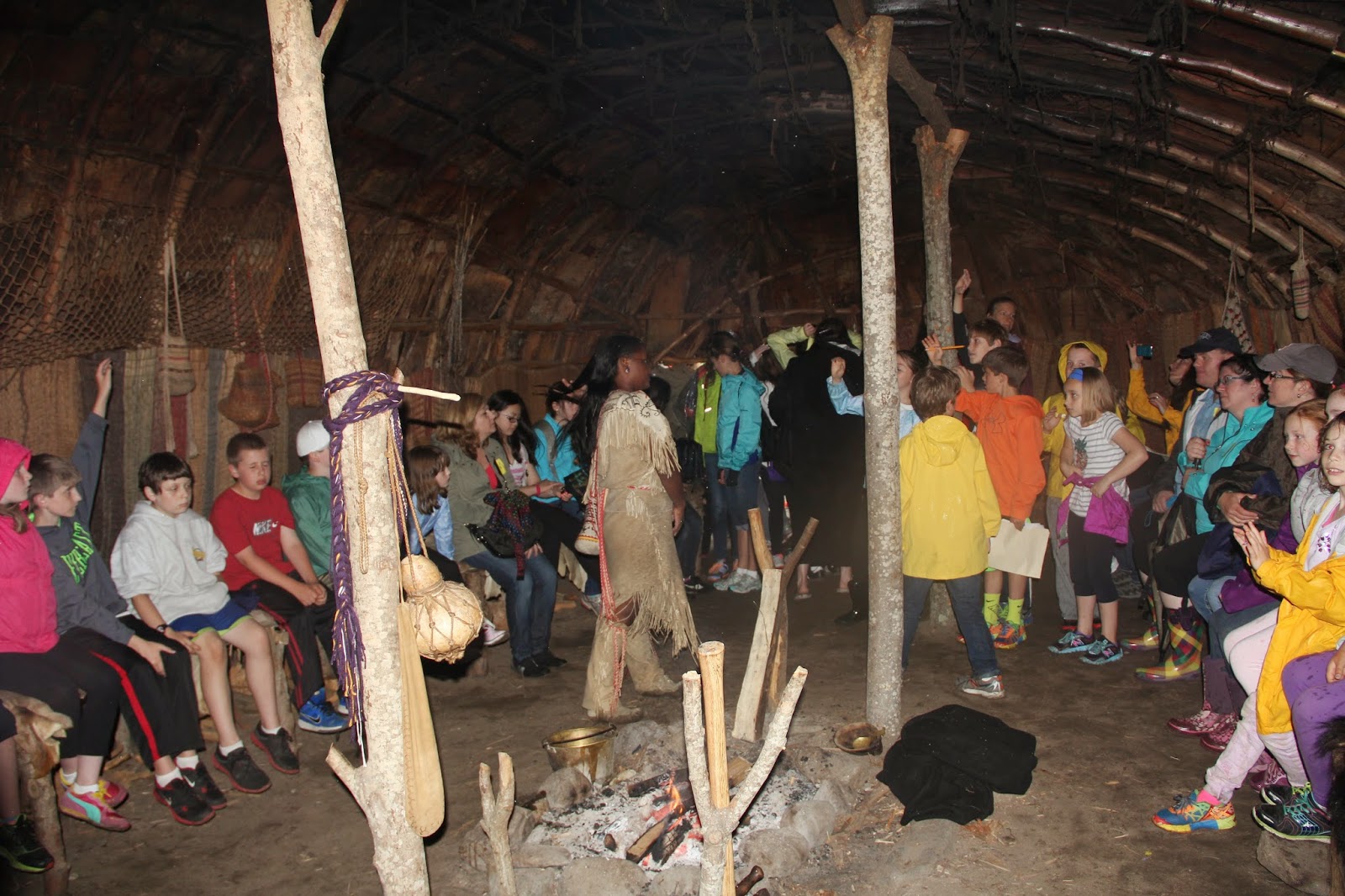 Here Native Americans answer questions (from way too many school children on school outings), but not as if they were living in the 17th century. It would have been nice if there was less rain and more opportunities out side to see and hear about these first Americans. 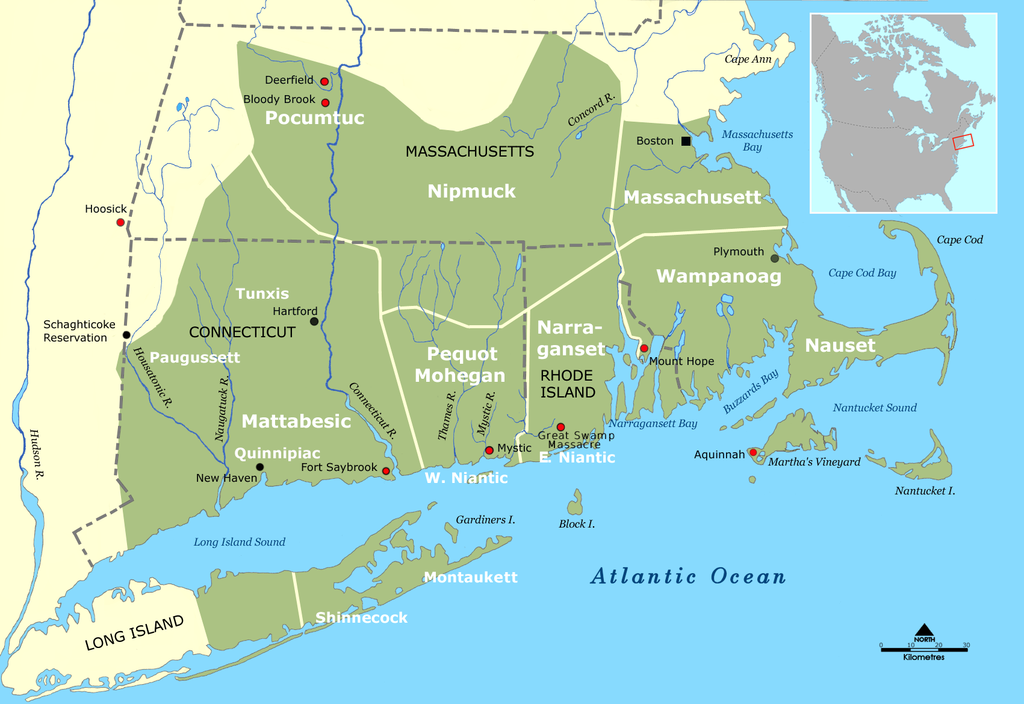 I also am a direct descendant (via Louisa Minnerly Shumway) from a Montauk Indian princess (of eastern Long island). The Montauks are related to the Wampanoags who helped the Pilgrims so I kept reminding the kids that they were seeing in both the pilgrim and Native American villages how their ancestors would have lived. For lunch I enjoyed a Wampanoag platter of local Native American fare: succotash (Sarah enjoyed this too), squash and stuffed quahog (clam). All very delicious. 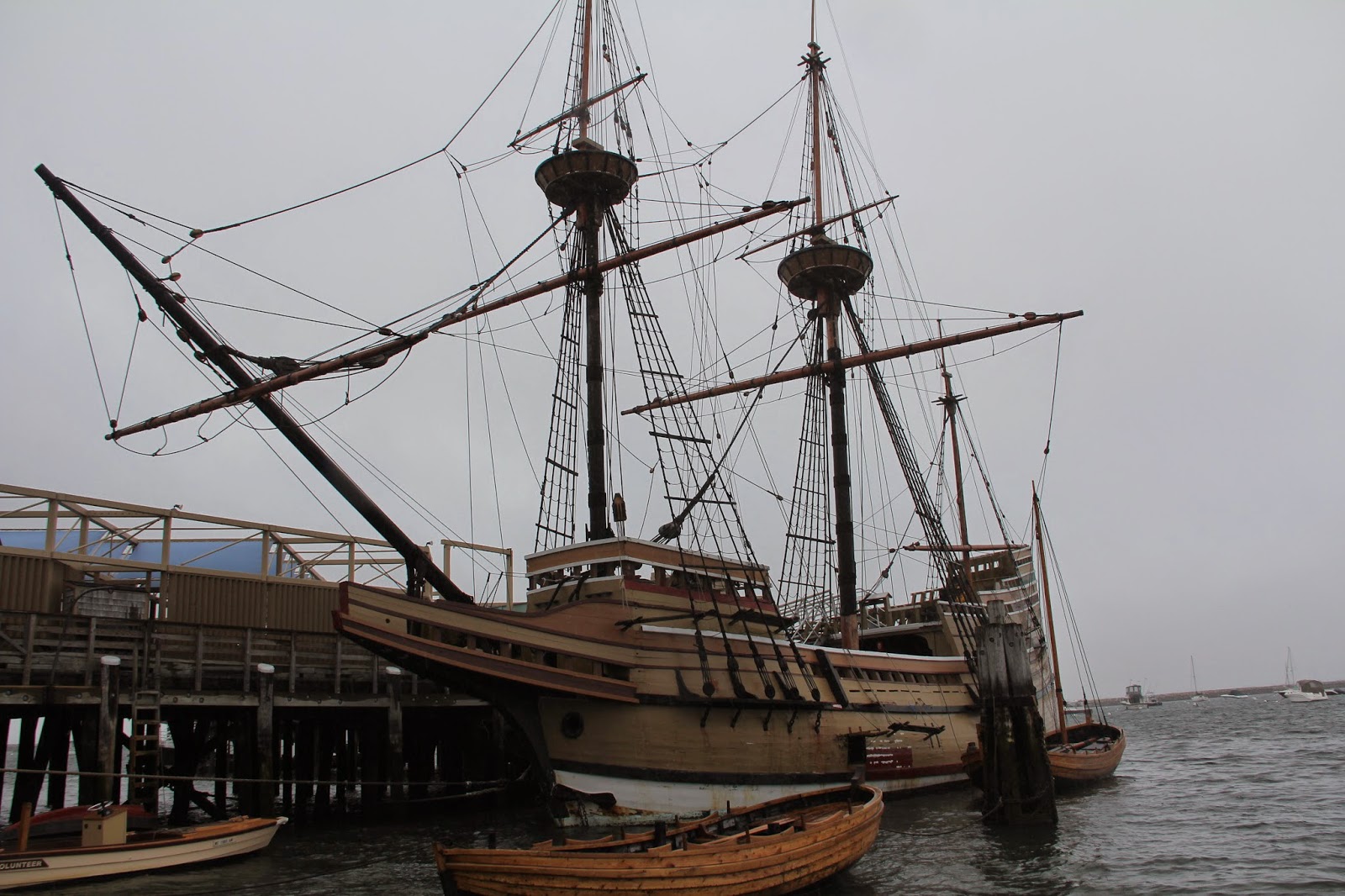 Next stop the Mayflower 2. 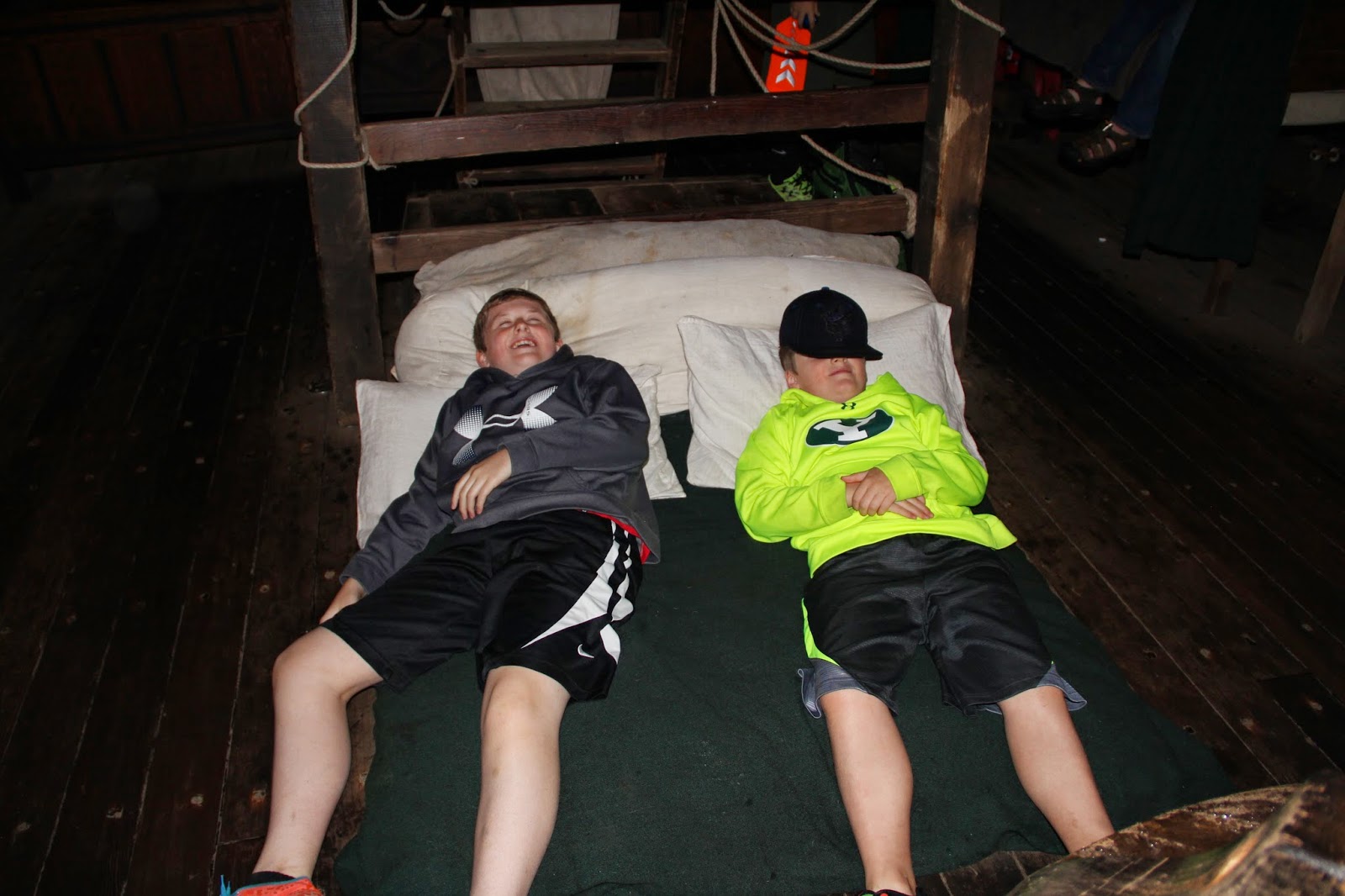 Sleeping on the lower deck. 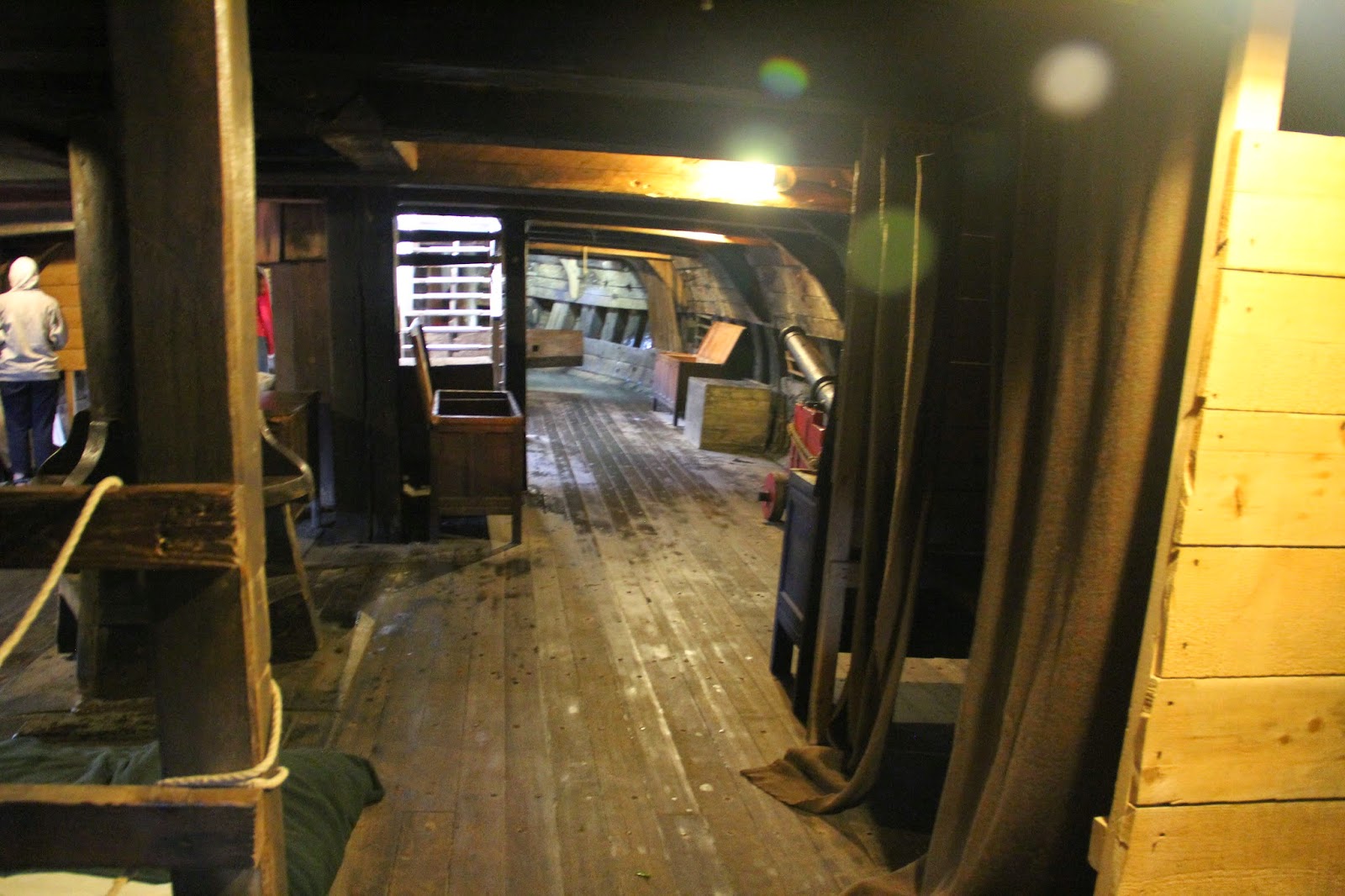 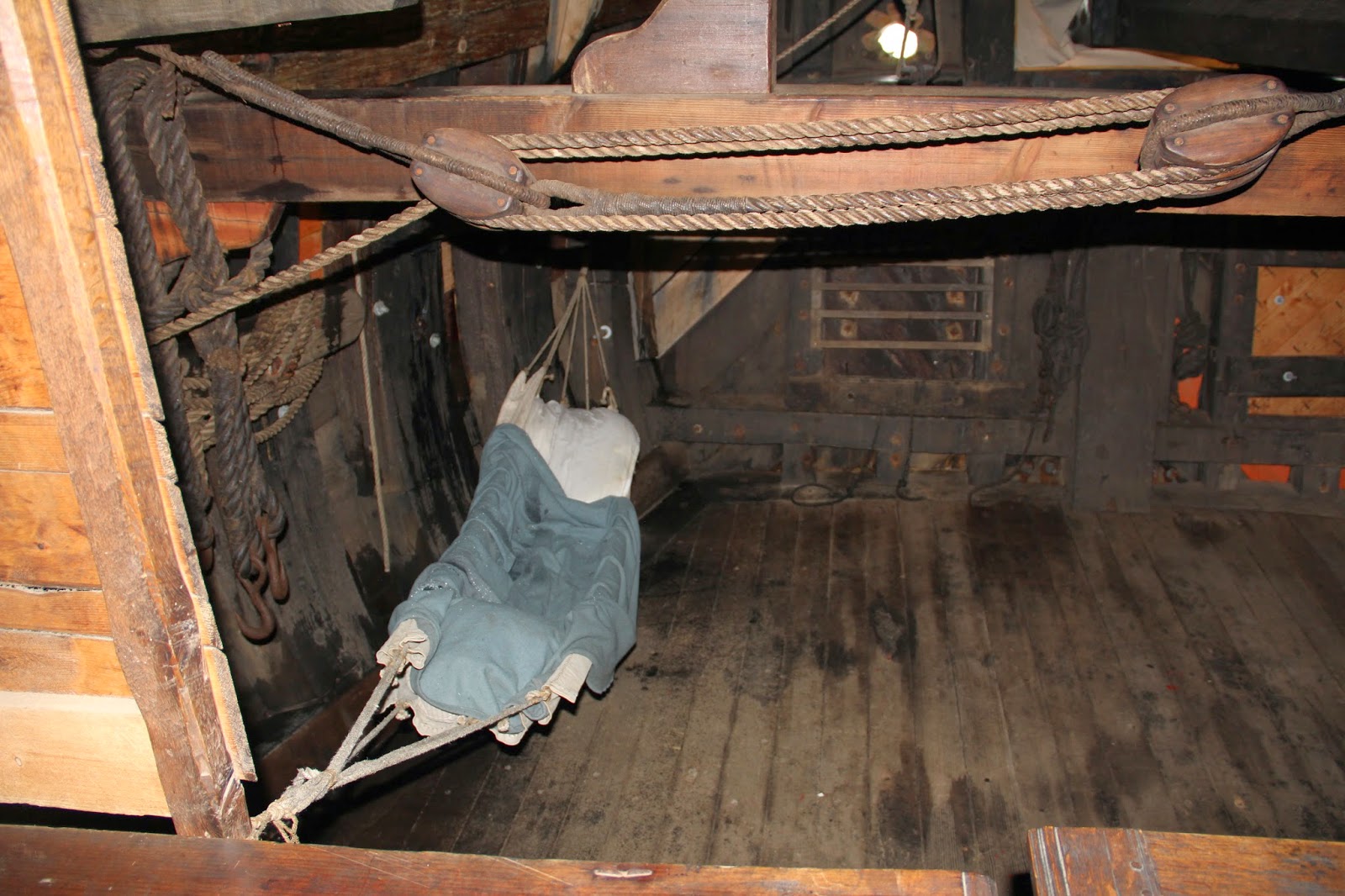 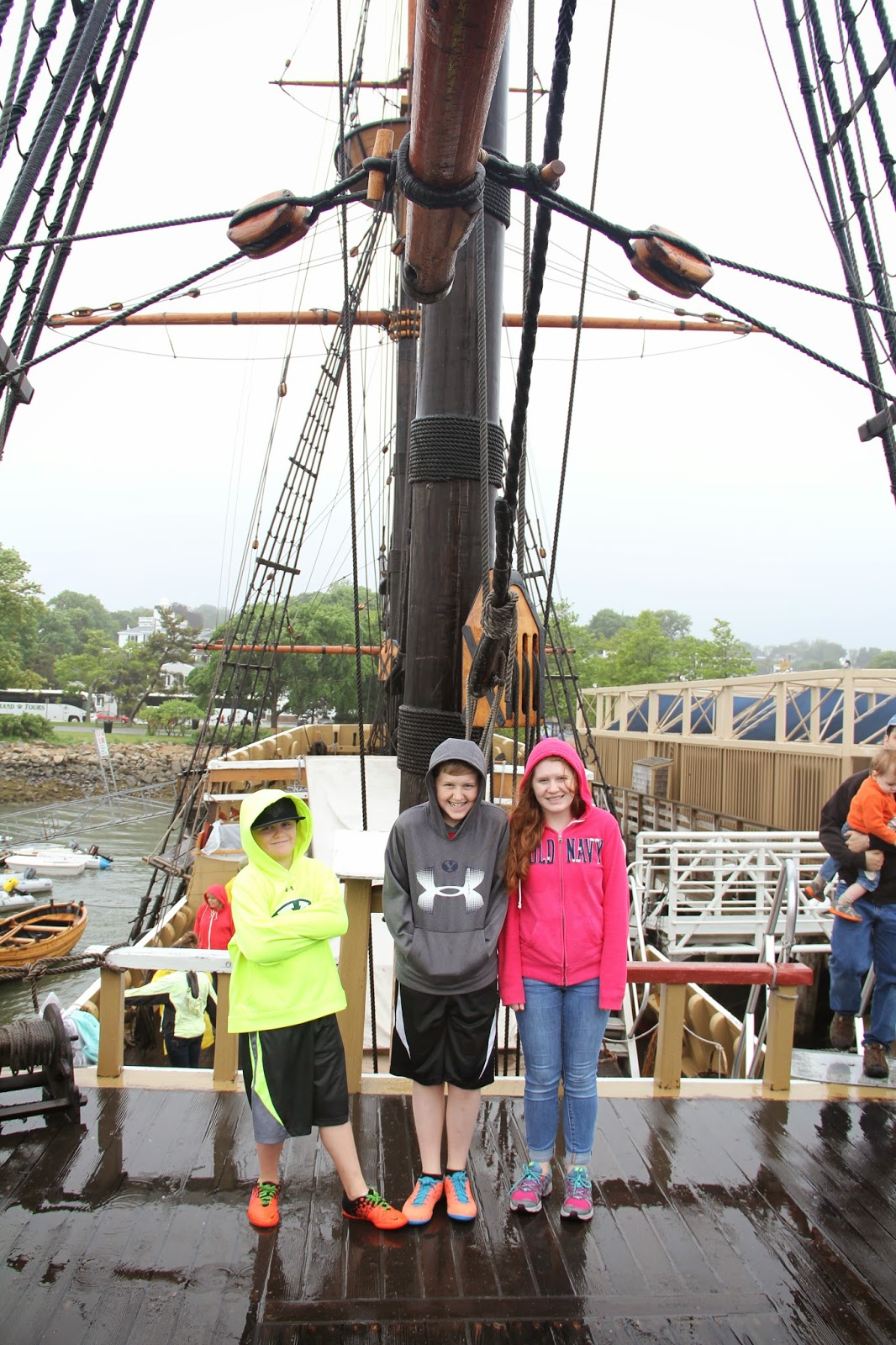 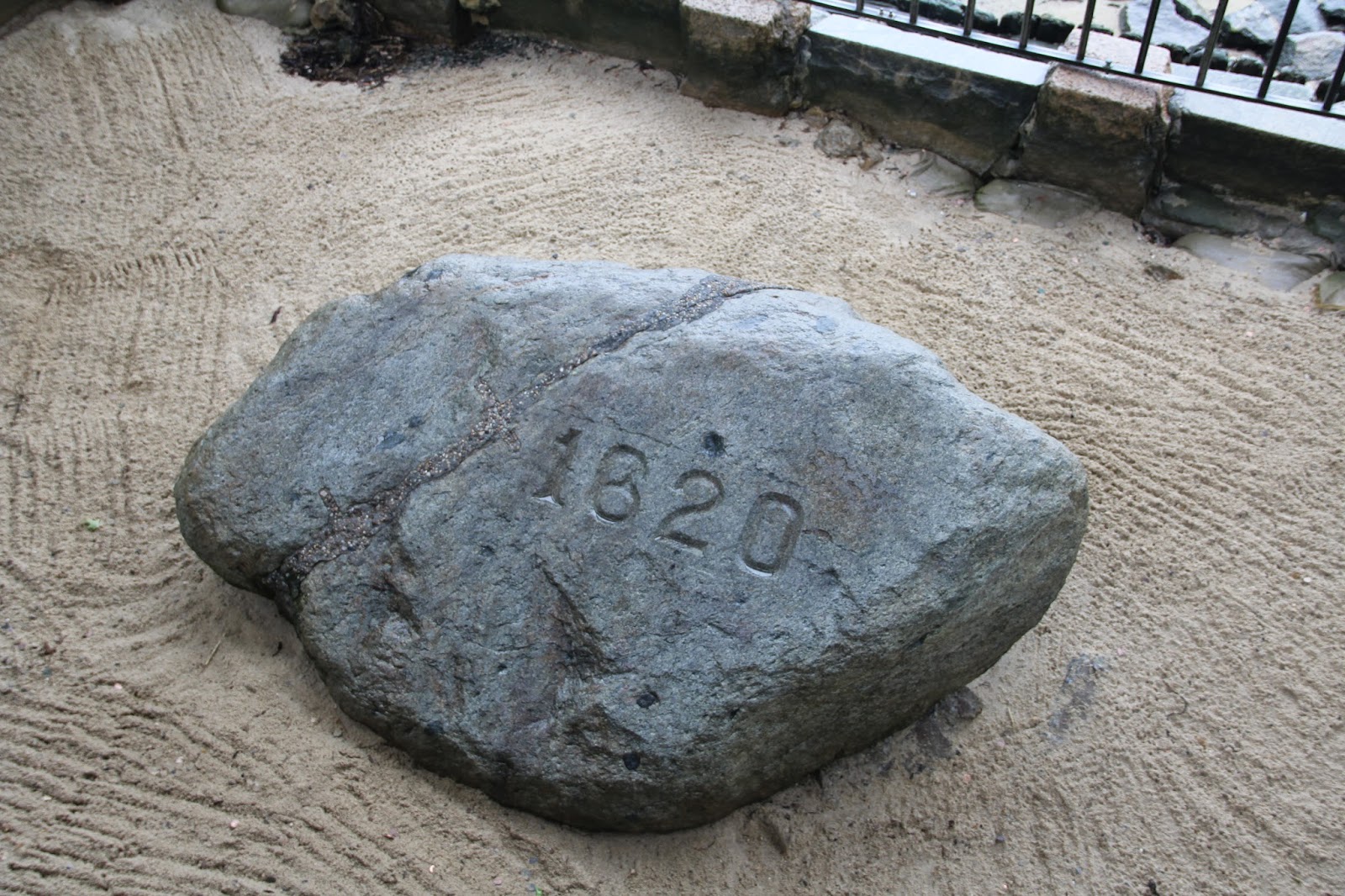 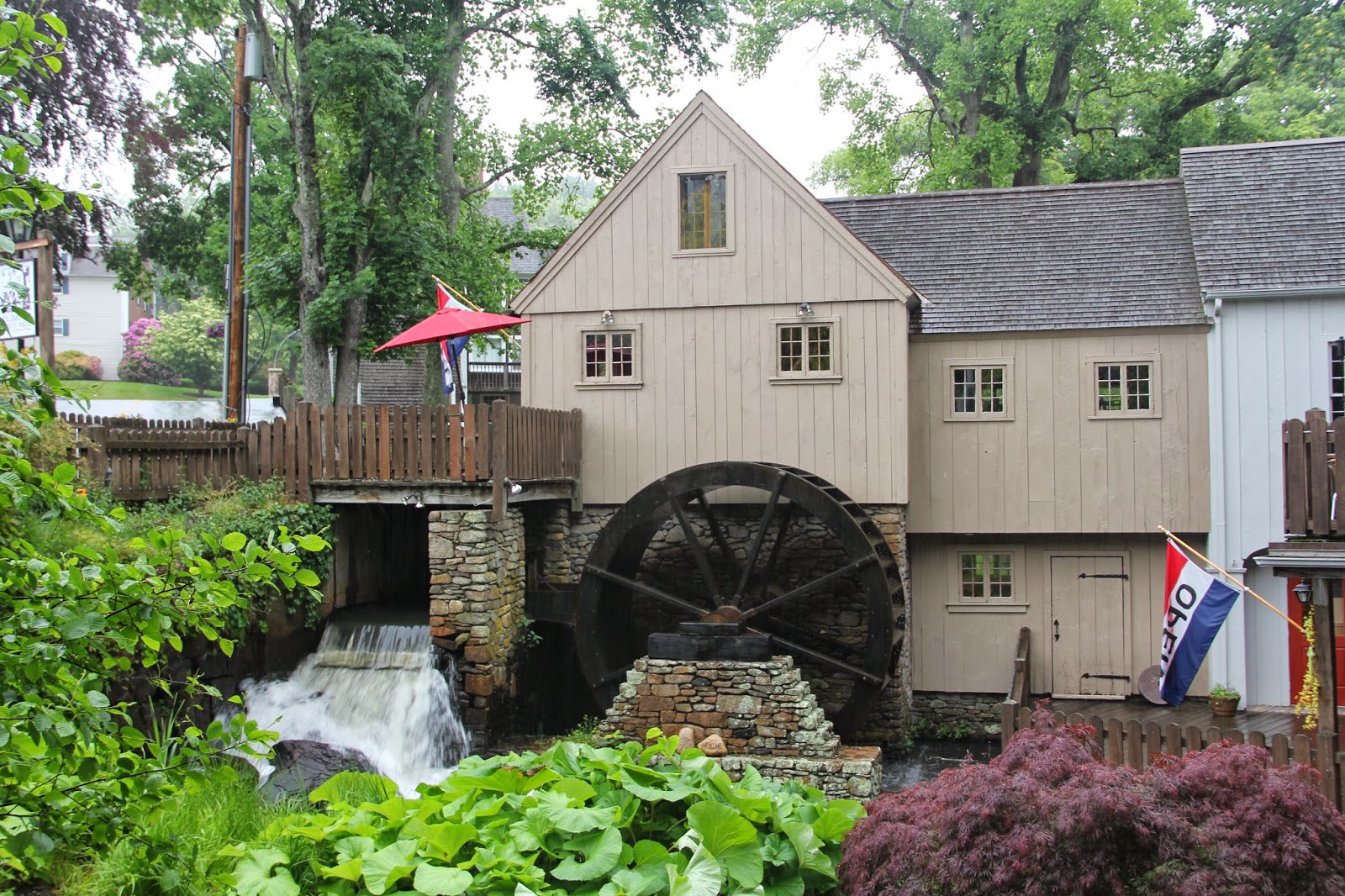 And finally a grist mill in the center of modern day Plymouth. We learned all about water power and corn grinding. 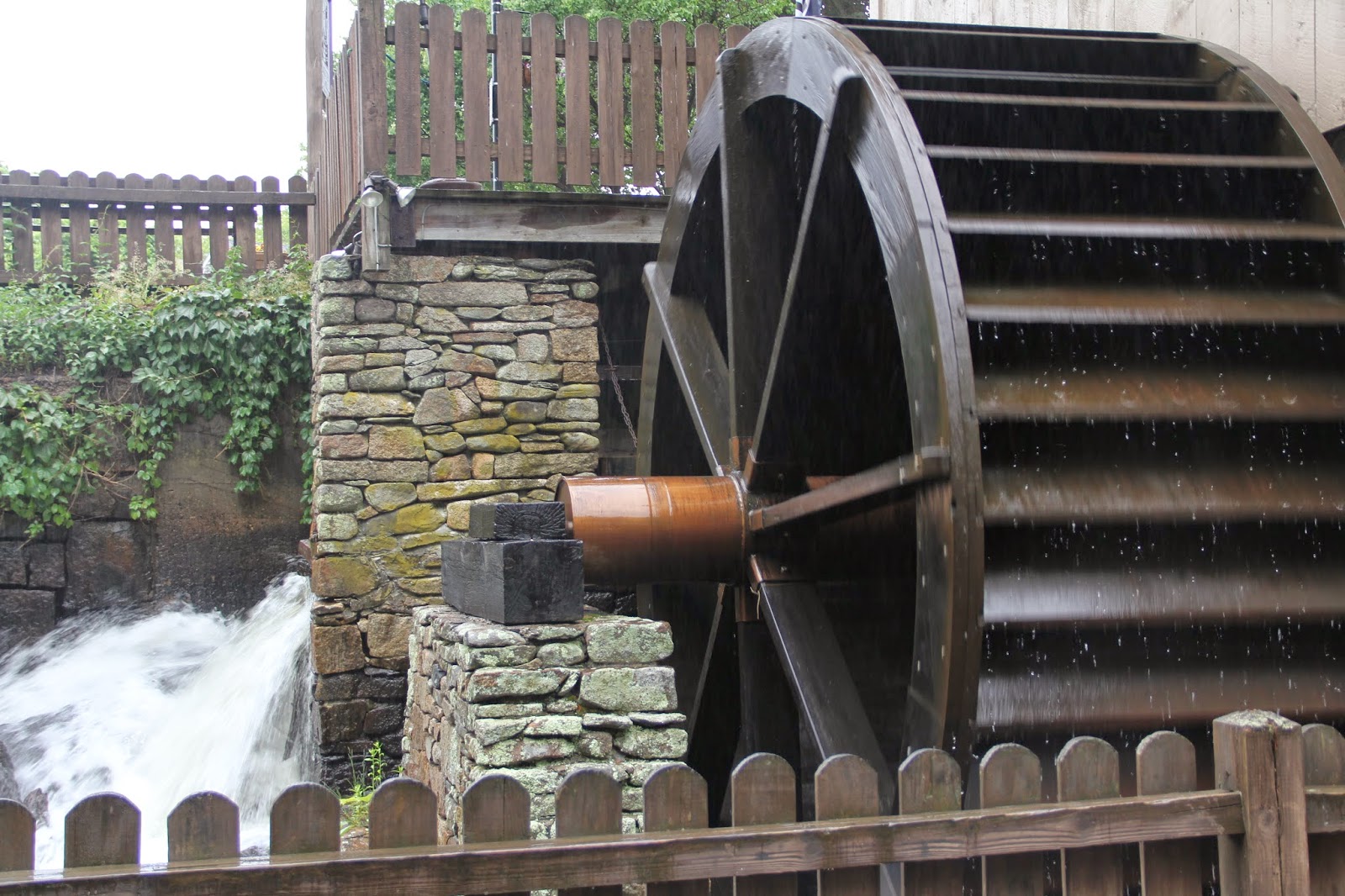 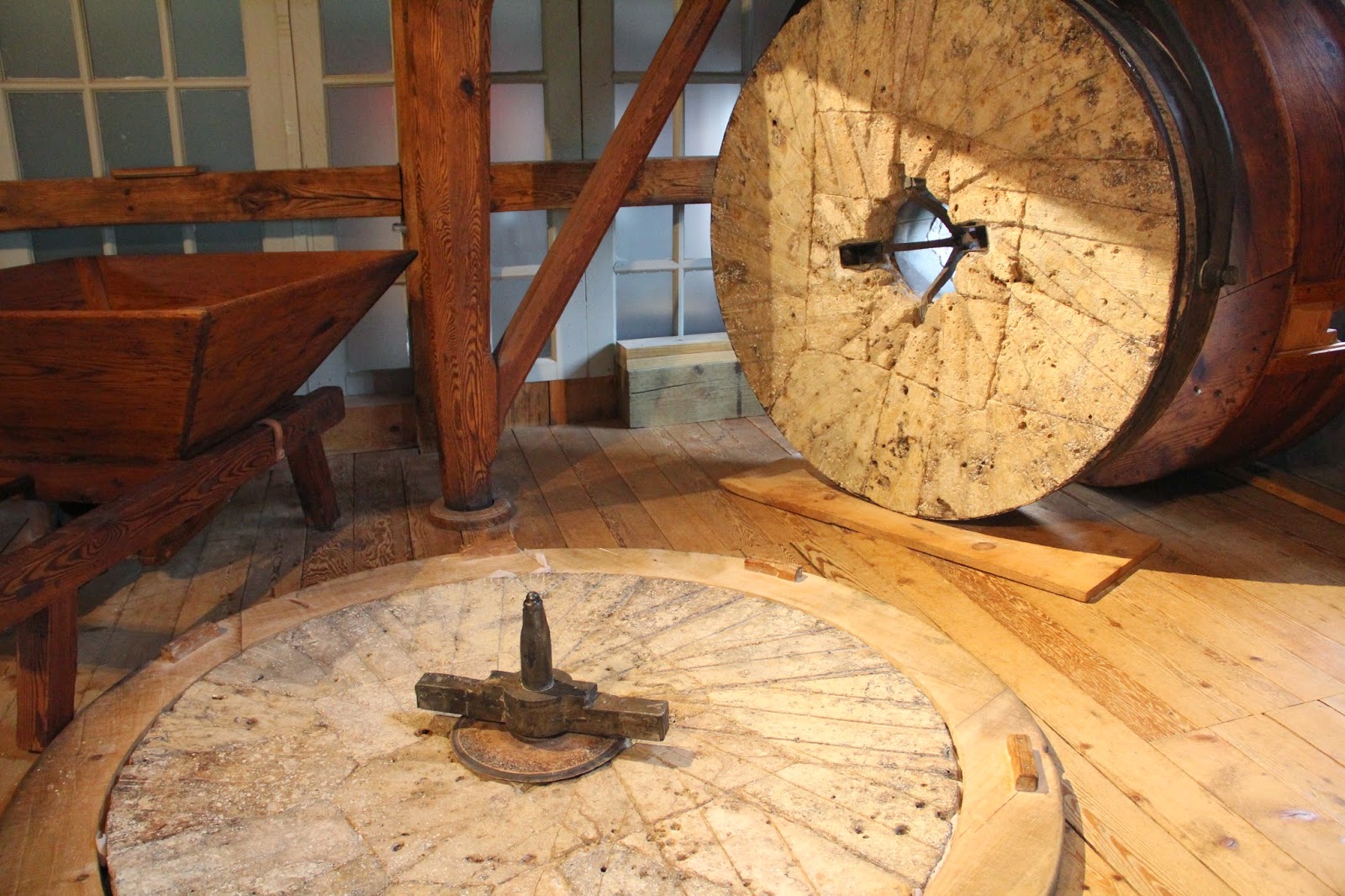 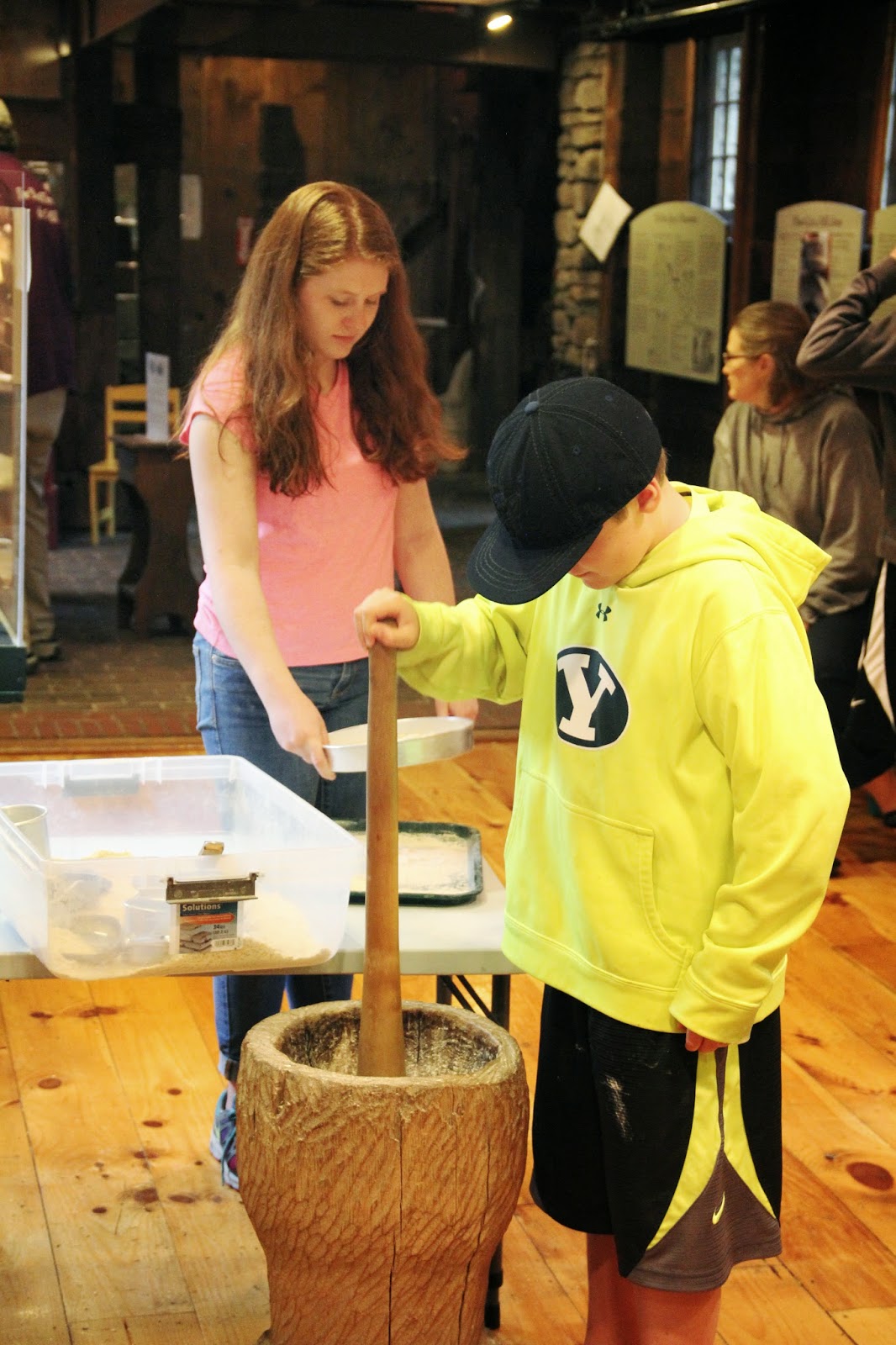