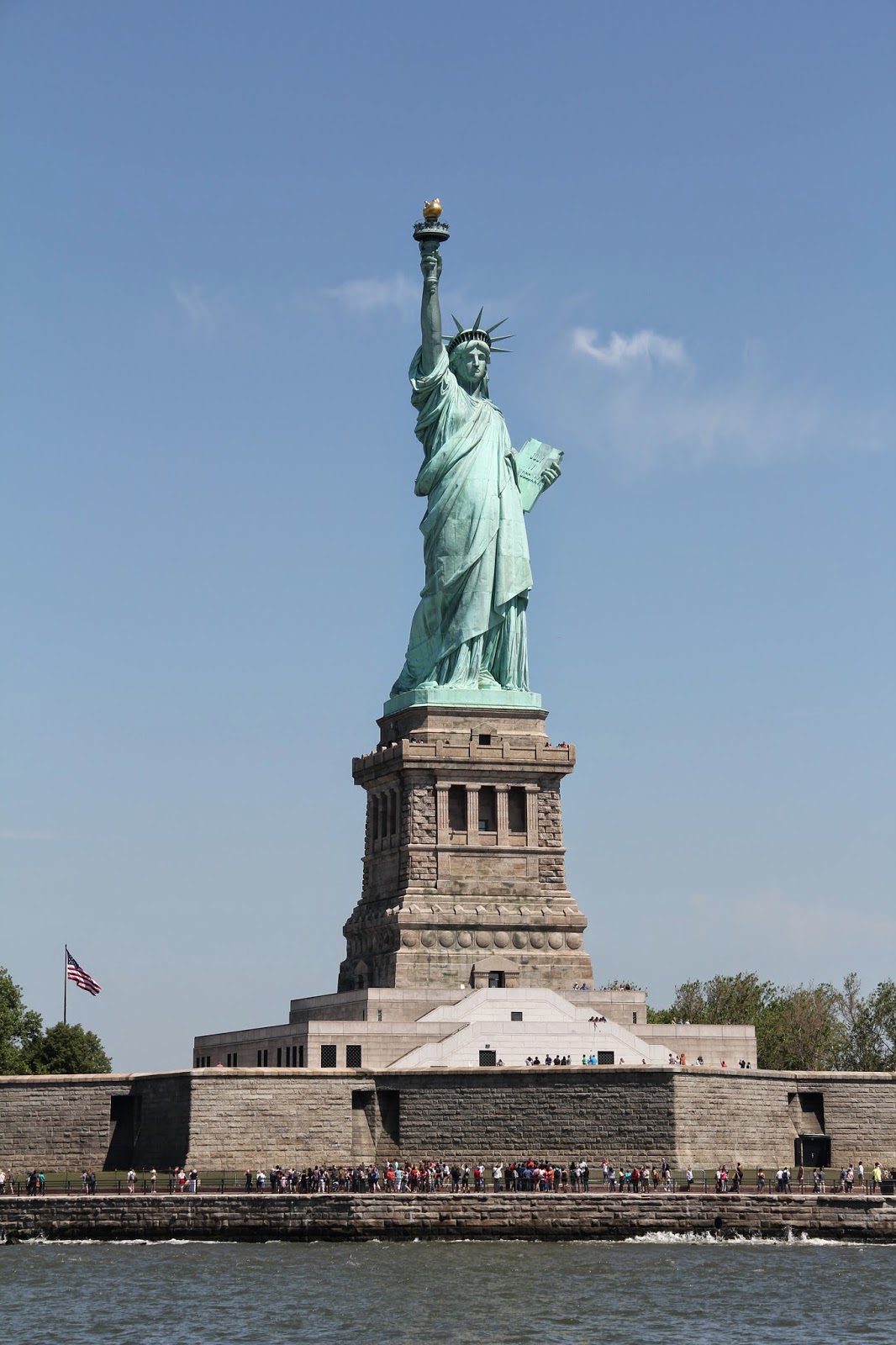 Monday in NYC started out with bagels and muffins for breakfast followed by a red line subway ride to the southern tip of Manhattan. From there we rode the ferry out to the Statue of Liberty. Warning to future visitors: if you want to climb up to the crown for a view you need to make reservations 3 months in advance and if you want to go up to the top of the pedestal for a view you need to make a reservation 3-4 days in advance. We didn't know these things and so when I looked for tickets on Saturday all options to climb up the statue were sold out. So we just walked around the island. 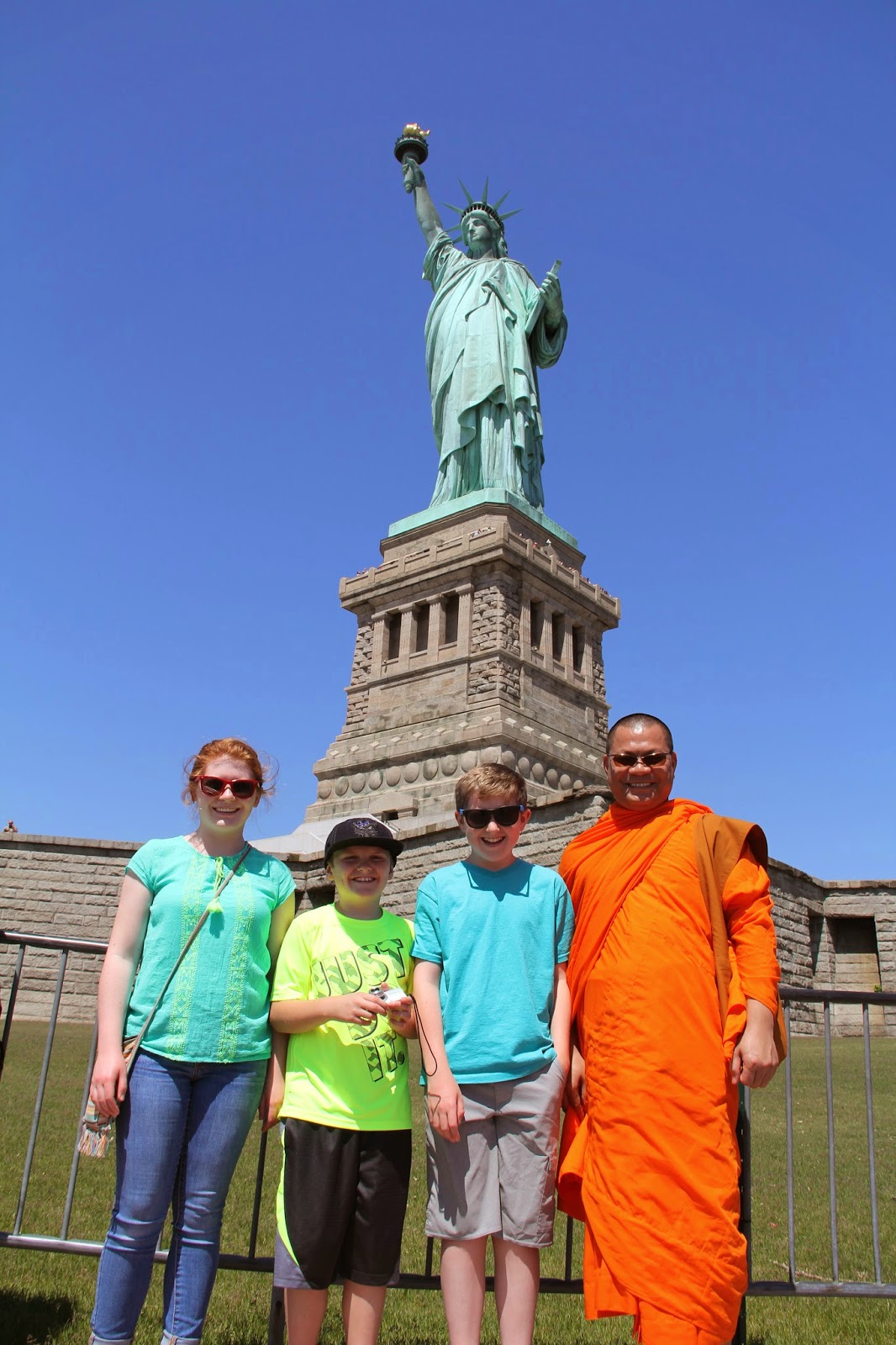 I invited a visiting Buddhist monk to join our photo. I found out he was from Cambodia so I thanked him in my limited Cambodian. 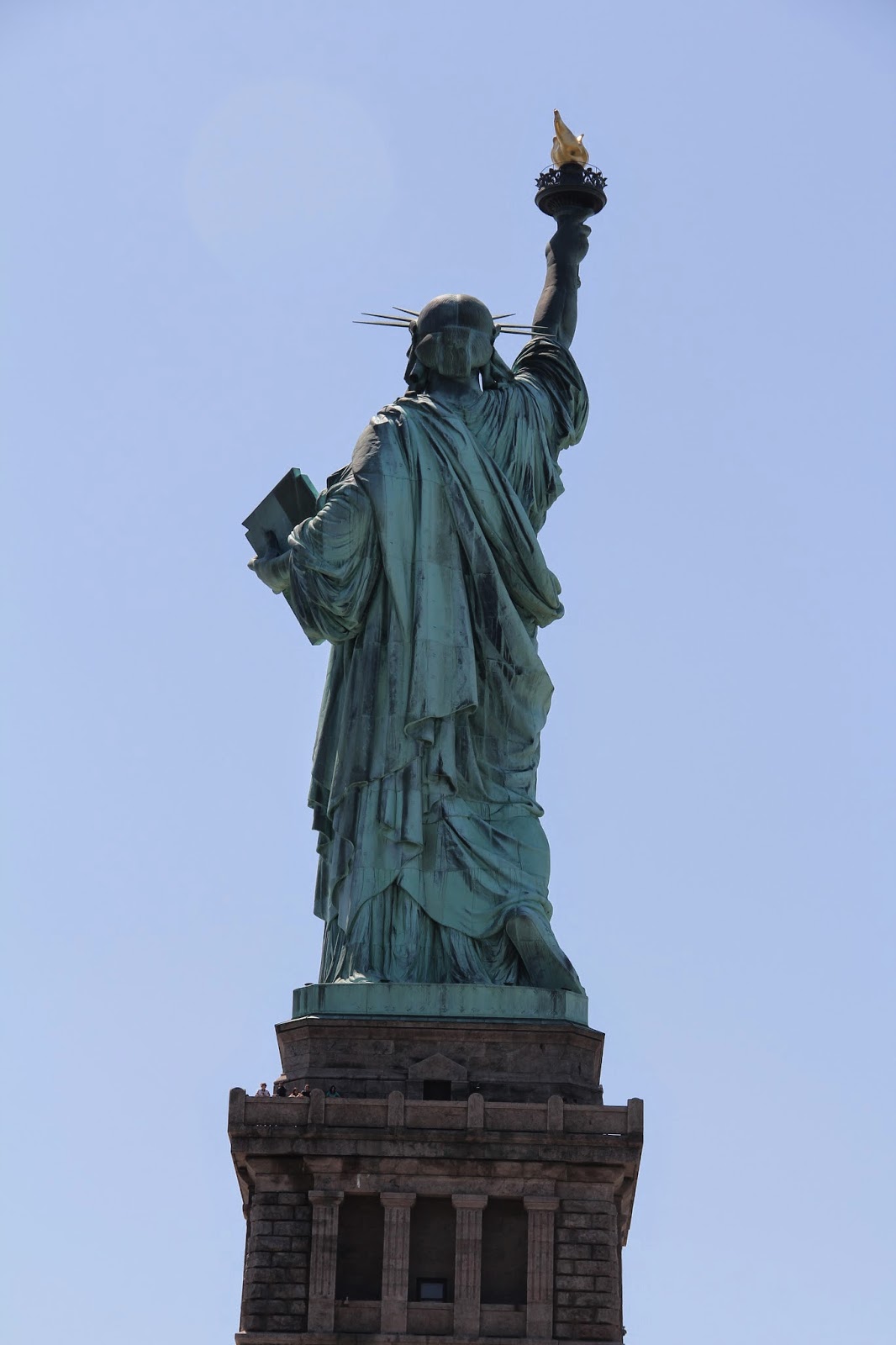 Lady Liberty's right foot is raised to symbolize movement. Liberty and freedom are not stagnant things. They take movement and effort. 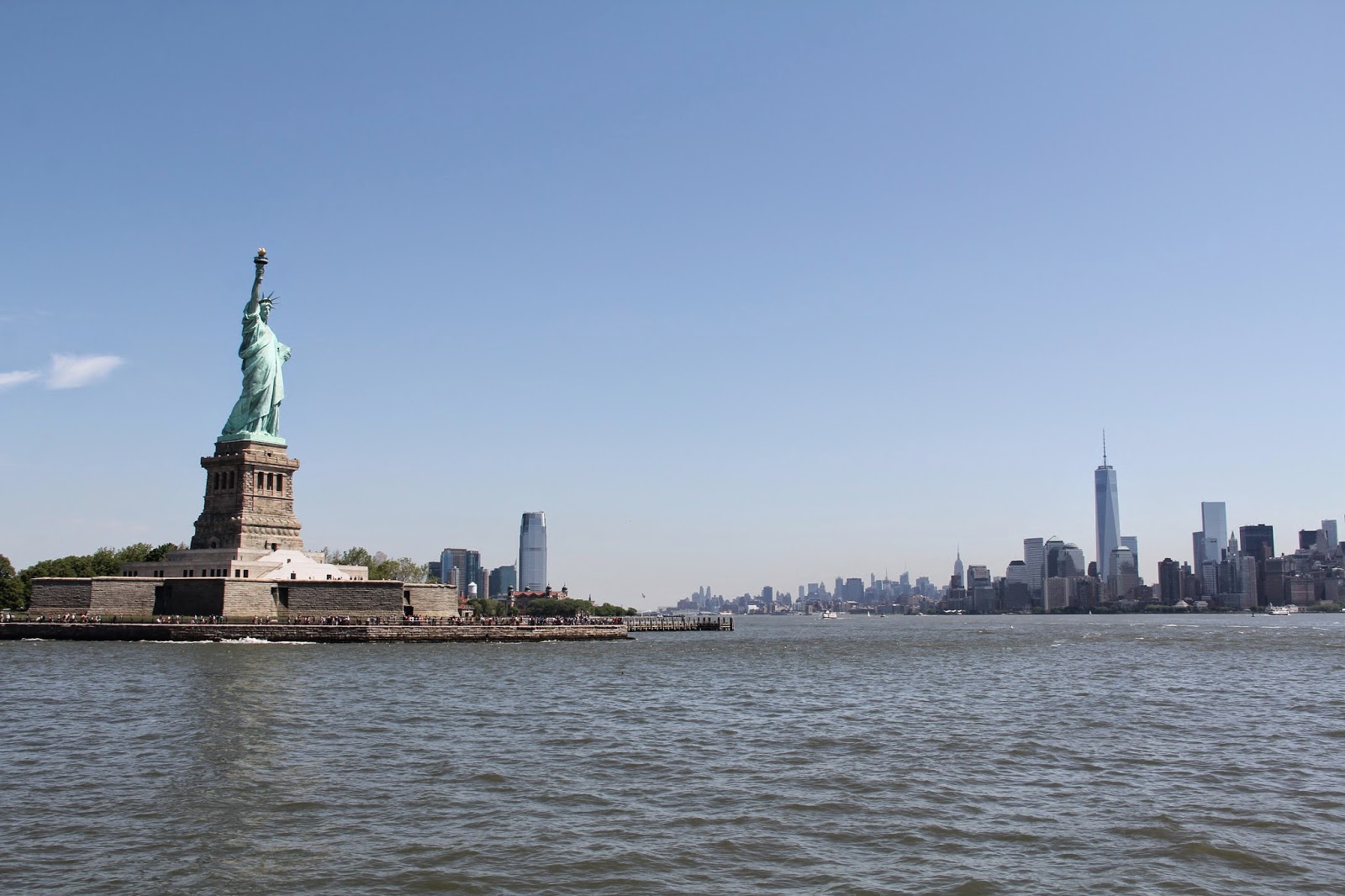 The towers of Jersey City (left) and NYC (right) mark the entrance to the Hudson River. This corridor northward when combined with the Mohawk River and Erie Canal heading westward opened up a cheap and easy corridor to an expanding America west of the Appalachian Mountains. This greatly expanded New York's hinterland which gave it greater importance than other coastal port cities like Boston, Philadelphia and Baltimore which lacked a similar transportation network. 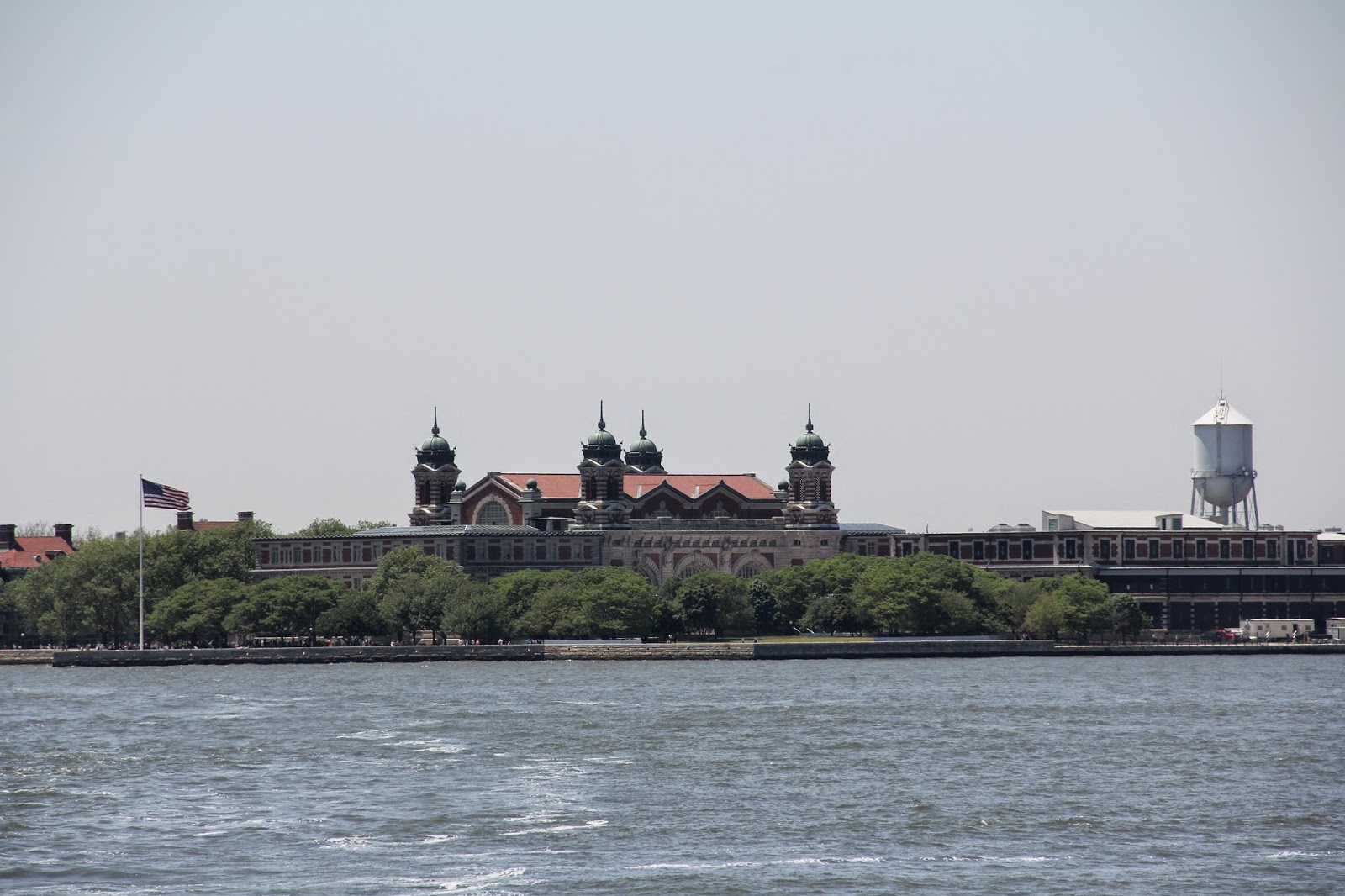 Next stop Ellis Island. The original island was much smaller than the current expanded island. A few years ago, New Jersey claimed that since the island was on New Jersey's side of the Hudson, it should be part of New Jersey. New York said no. New York mayor Giuliani even noted that if Ellis island had been part of New Jersey, his Italian father would not have come to America! The island feud got all the way to the supreme court. It awarded the original island to New York but gave the island additions to New Jersey. 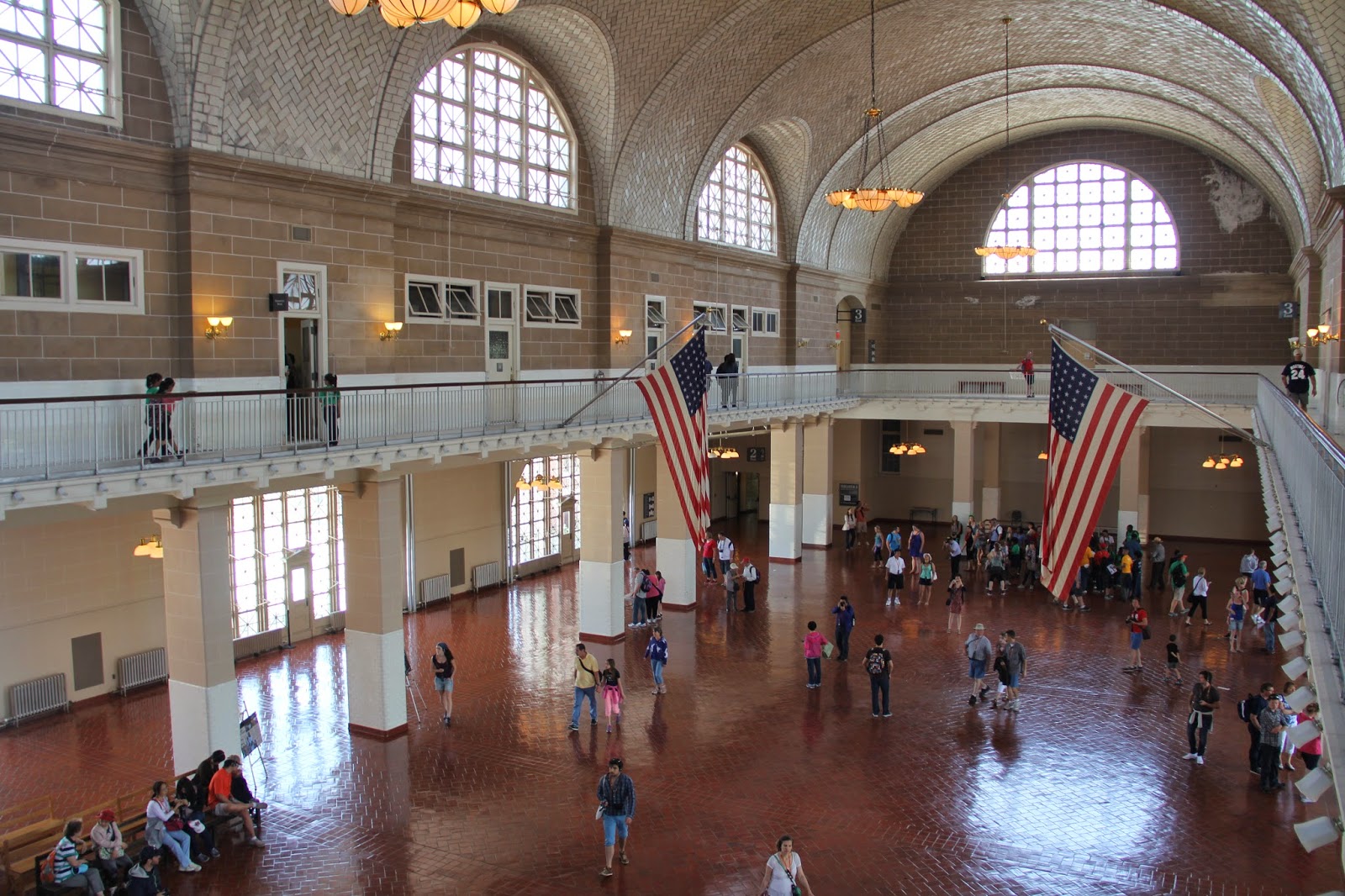 The great hall where immigrants were processed. 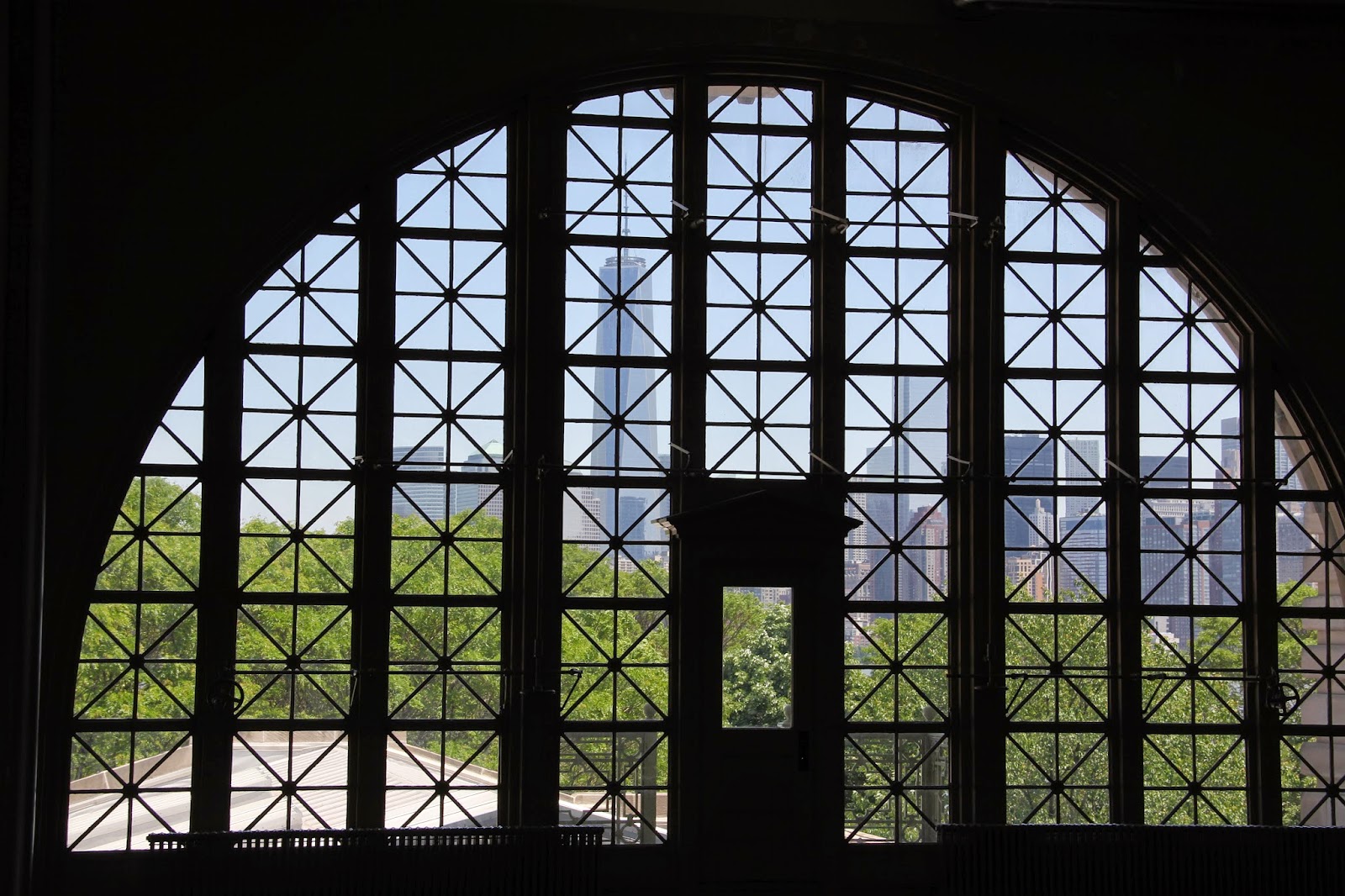 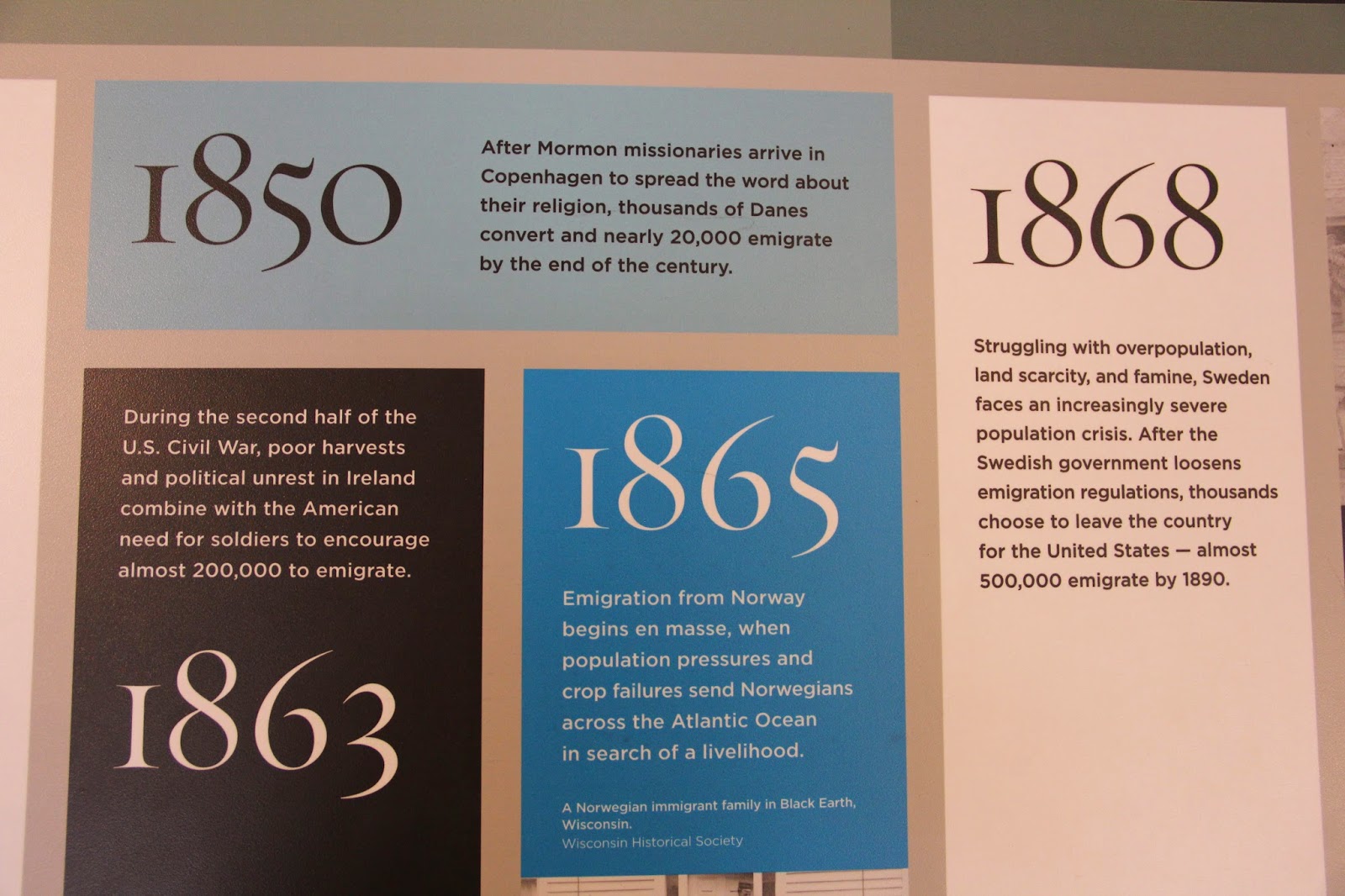 We really enjoyed the museum. I wonder if the problems in Scandinavia in the 1860s had any influence on the Mormon conversion process. The lure of Zion was probably even more attractive during times of famine. 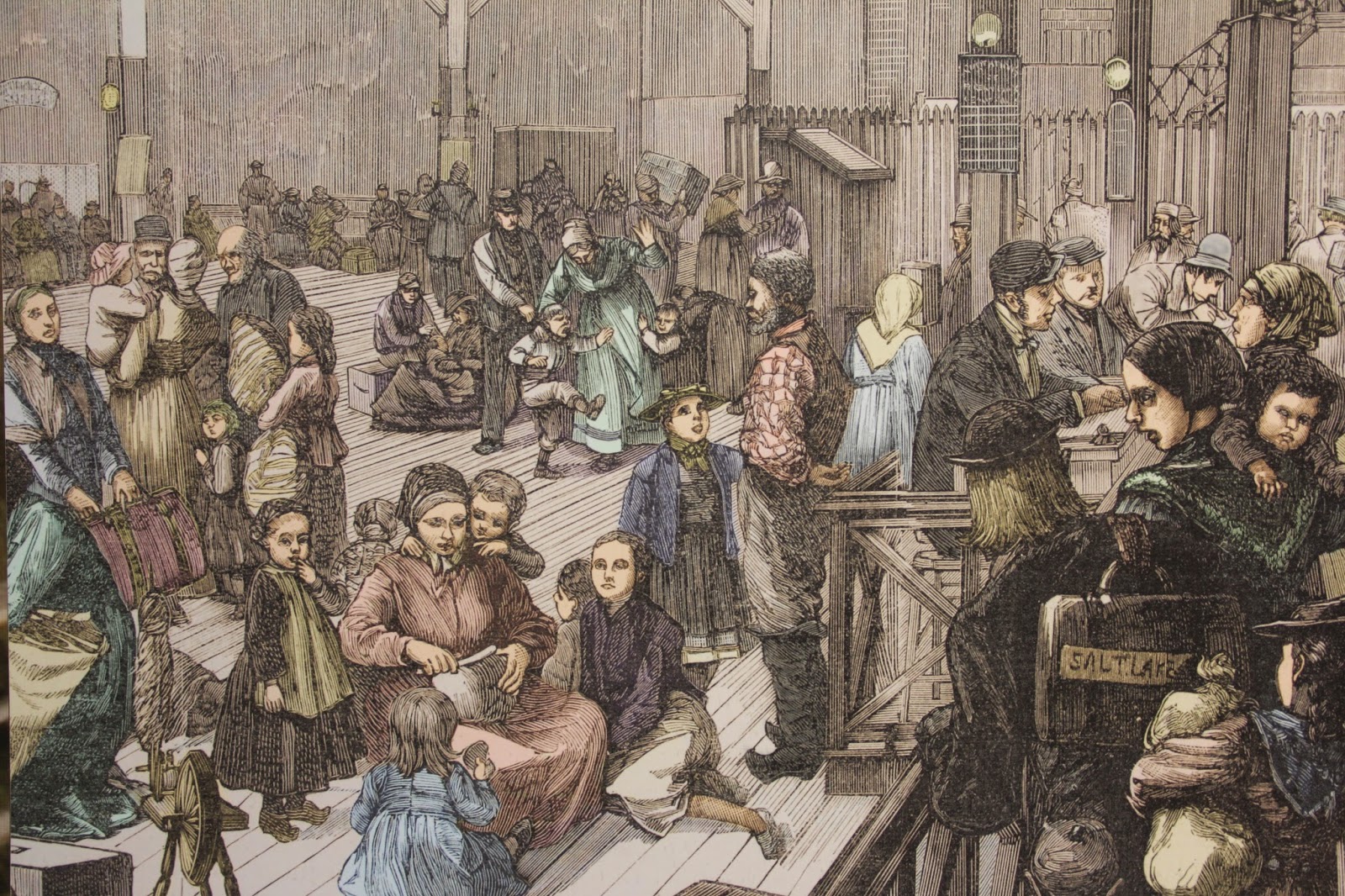 This is a drawing of early Mormon immigrants in 1870s going through Castle Gardens--the predecessor to Ellis Island. Wilie handcart pioneer ancestors (the Caldwell Family) came through here in 1856. 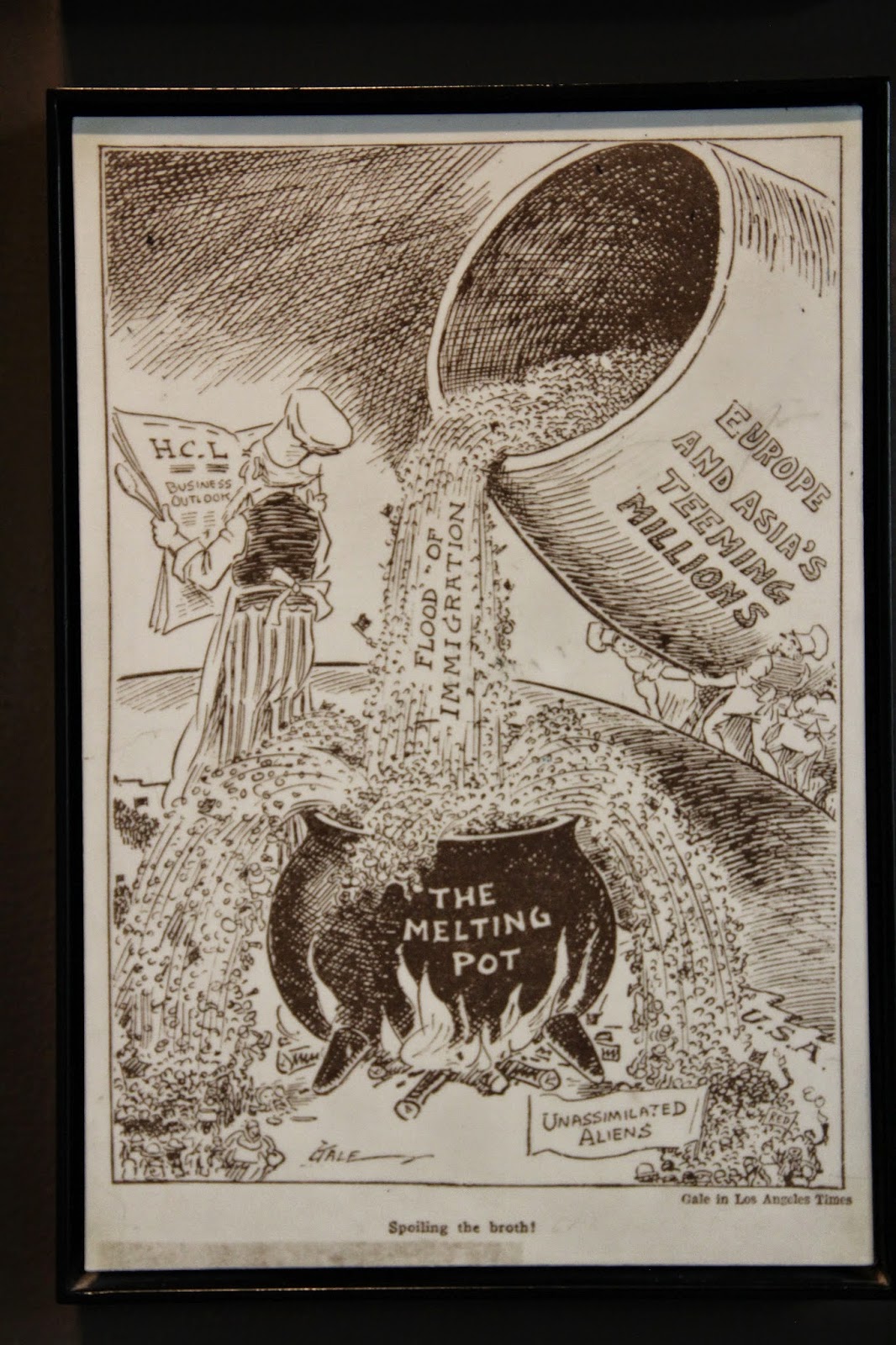 Sadly anti-immigrant feelings are nothing new. 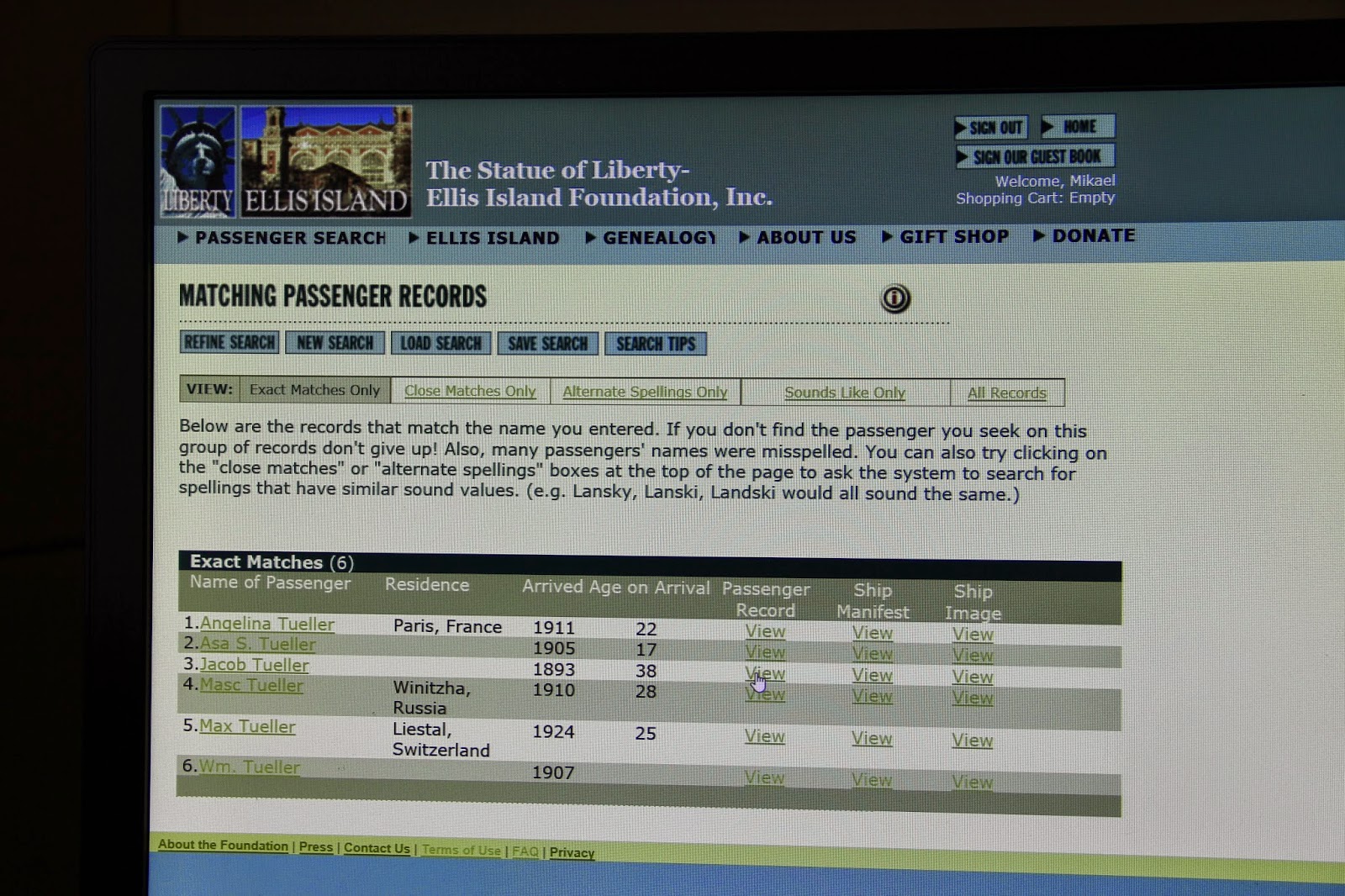 We even checked out extensive online collection of the passenger lists of all ships that at Ellis Island (all of which were entered on line by a host of Mormon volunteers including Marie). Unfortunately all of our ancestors arrived in America before Ellis Island became the central point of arrival. Marie wonders if this Max Tueller may have been a great uncle coming back to America from a mission in Switzerland. 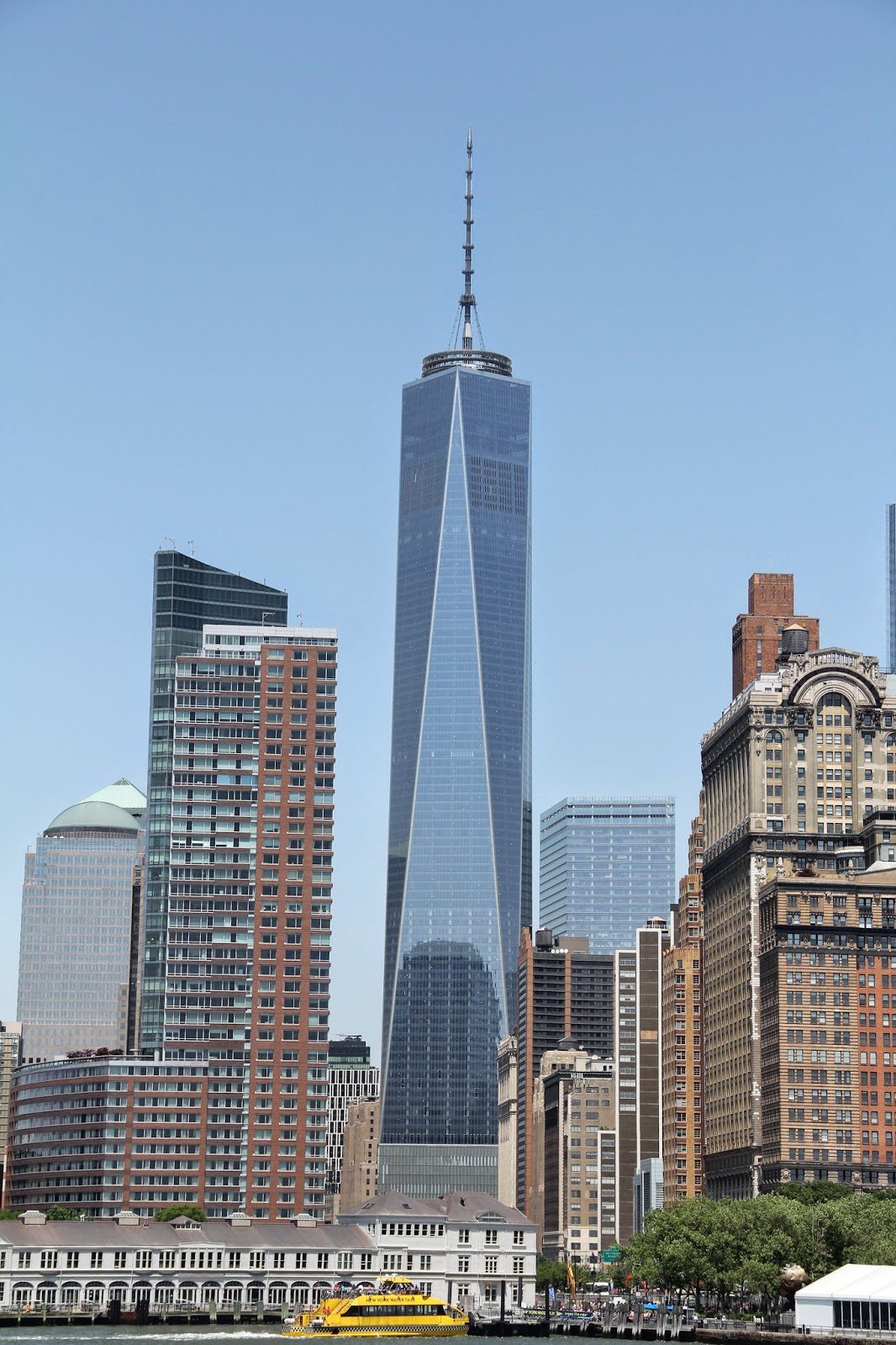 Next stop the September 11th memorial and One World Trade Center 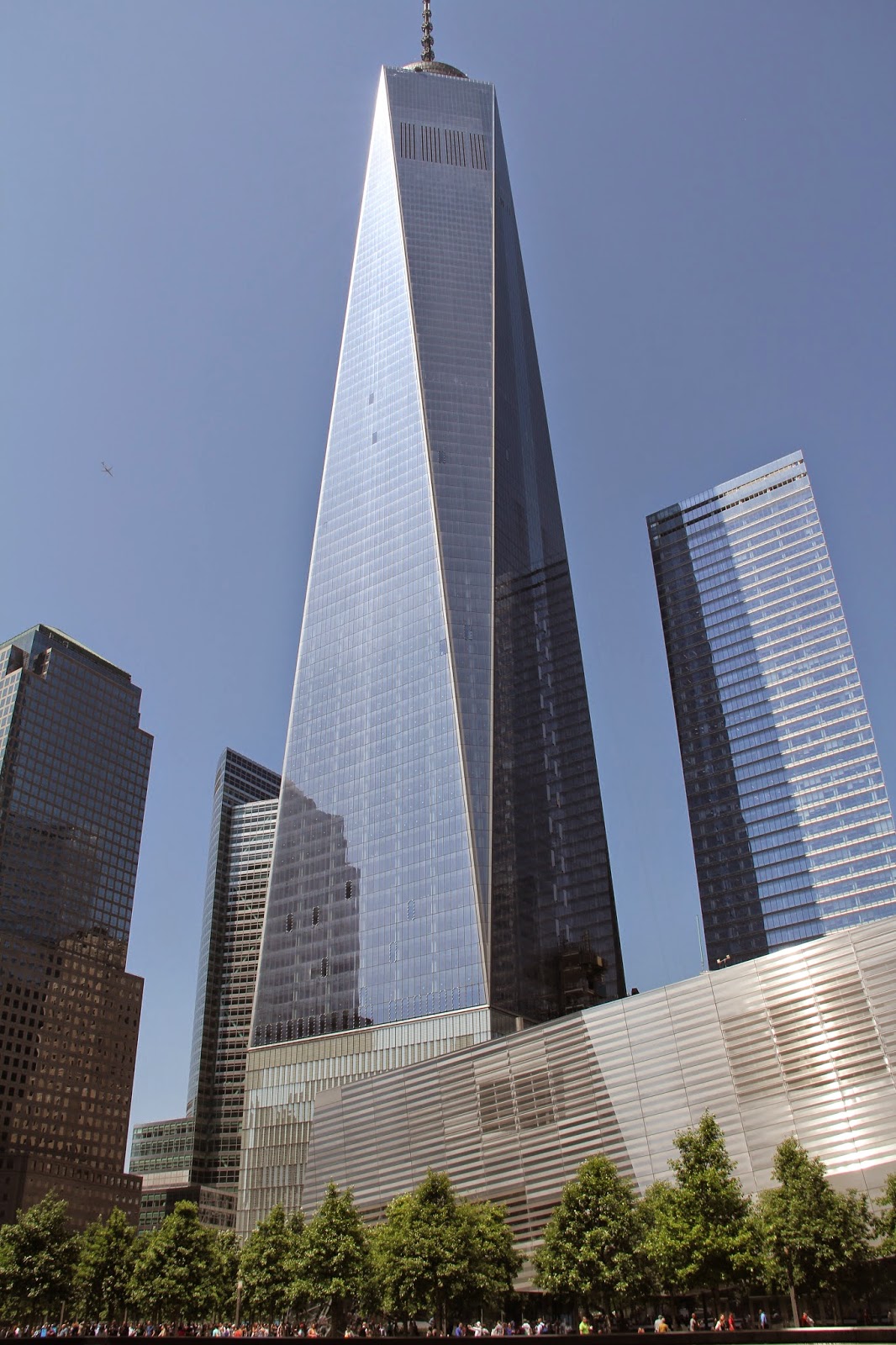 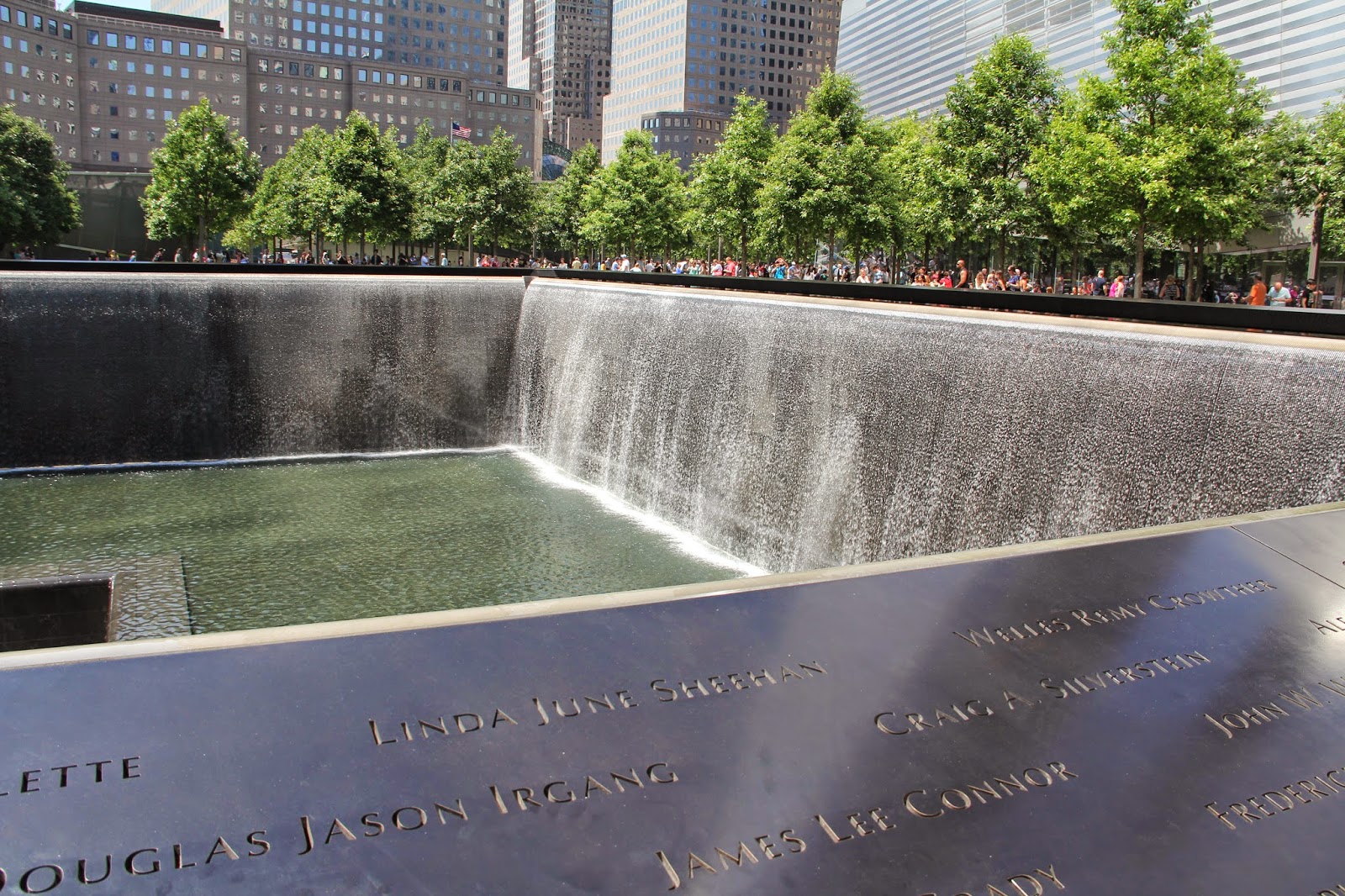 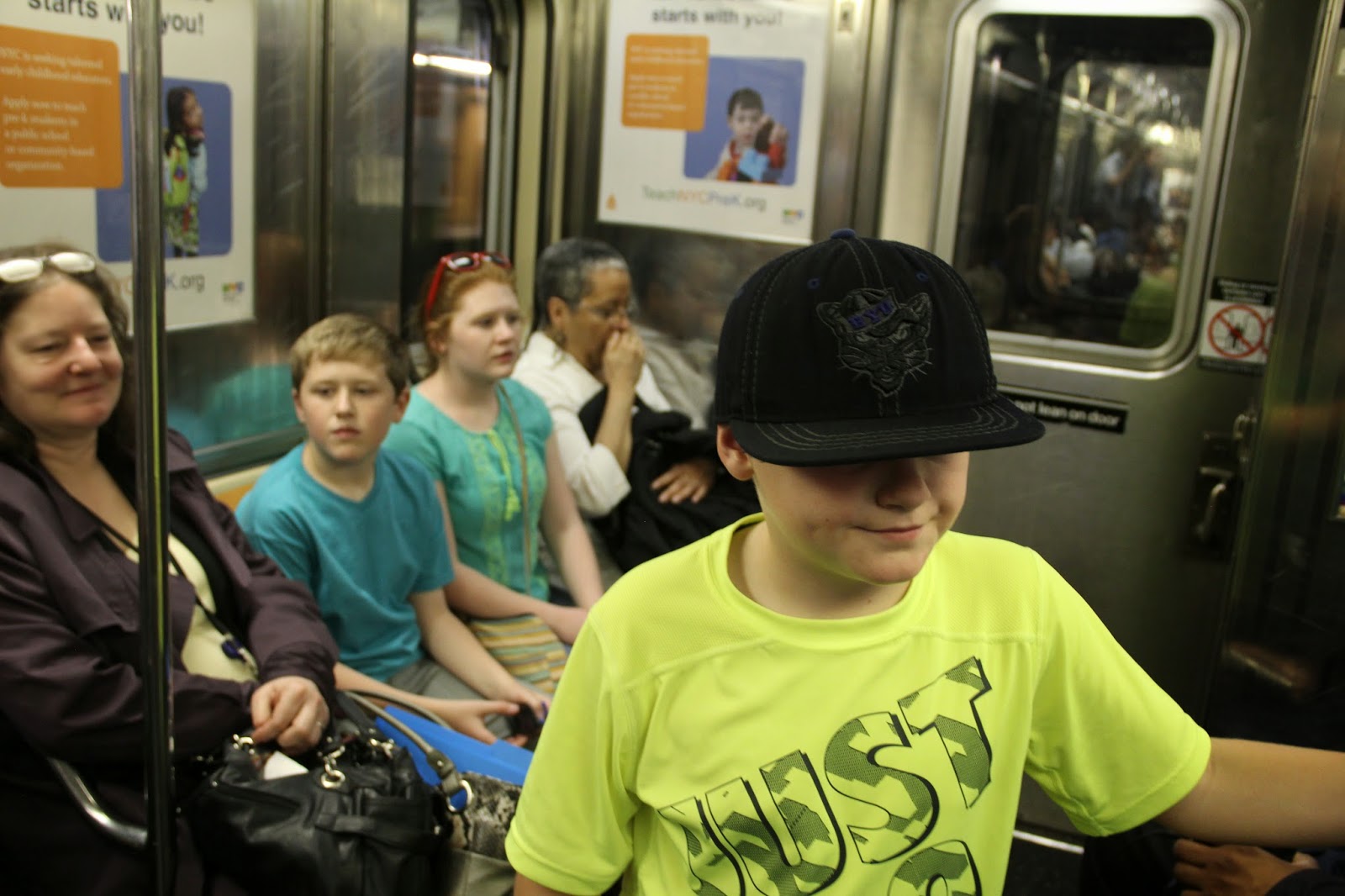 On the subway ride home, two nice New York women helped us figure out that we had hurriedly jumped on the express line  and told us where we could transfer to the local. We promised Will that we would make time for a swim in our hotel's (Holiday Inn on 57th) cold pool. It had quite a view. 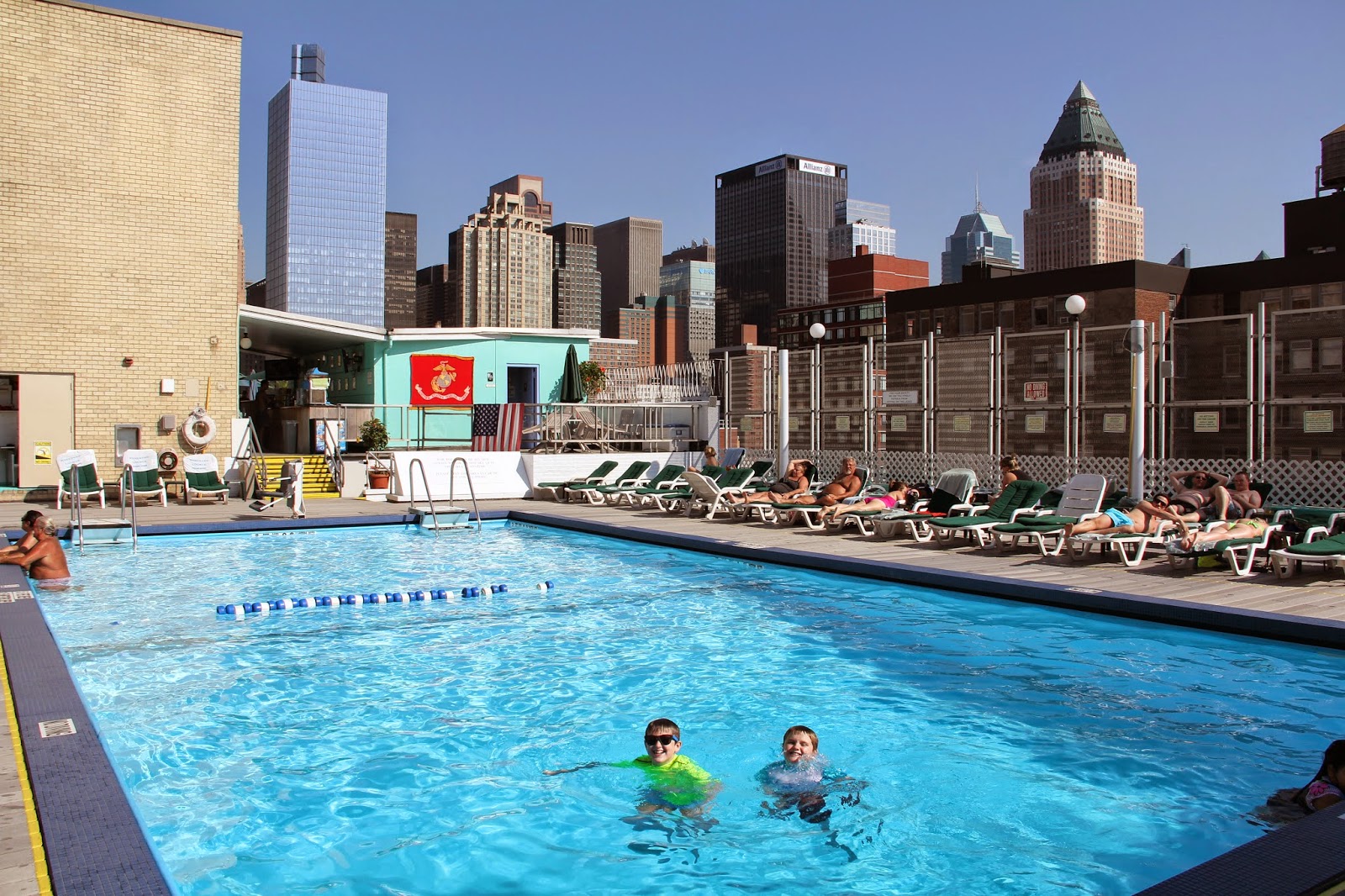 We found a nice Turkish restaurant for dinner and then enjoyed front row mezzanine seats for a delightful and amazing production of Newsies. 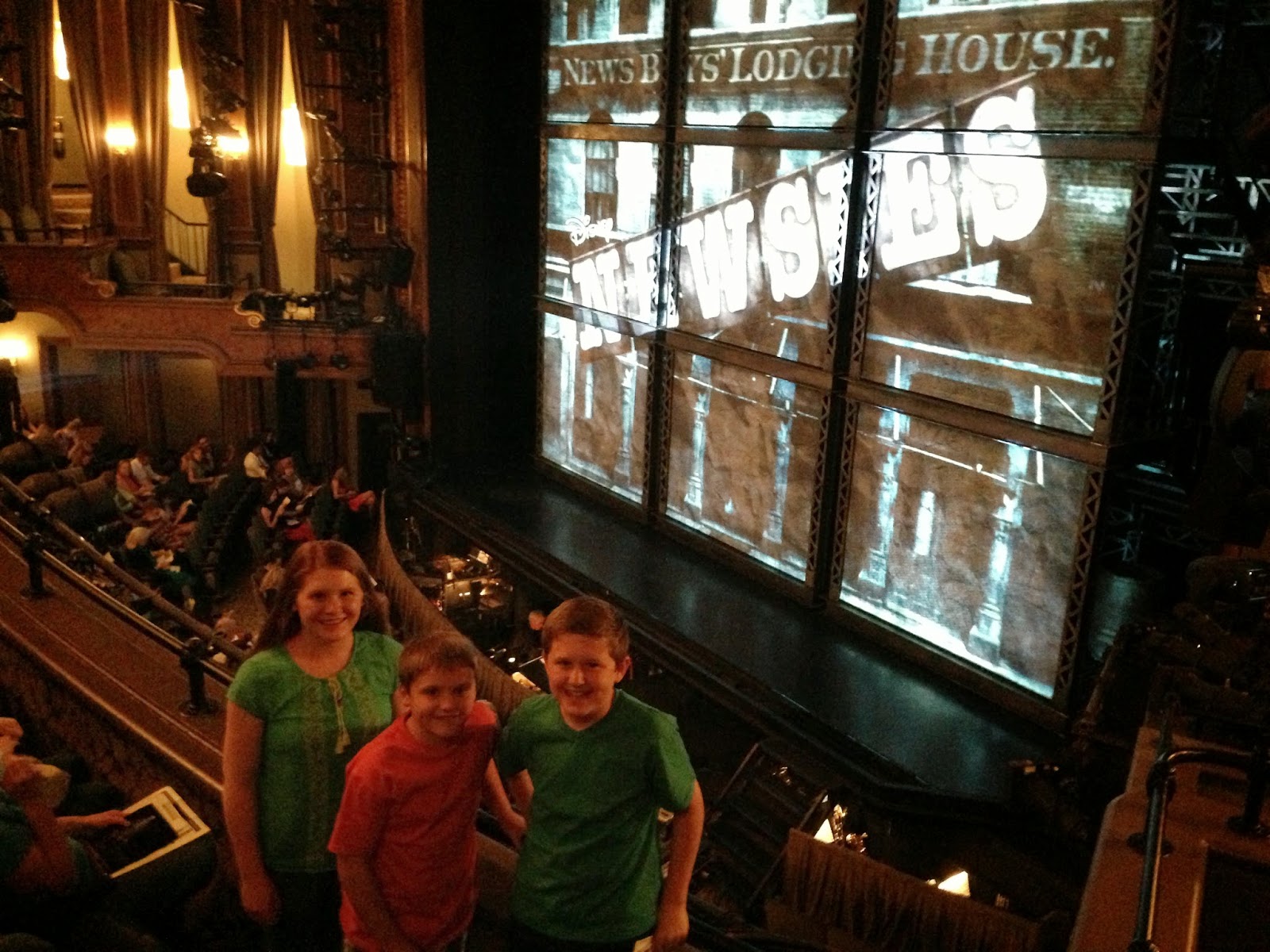 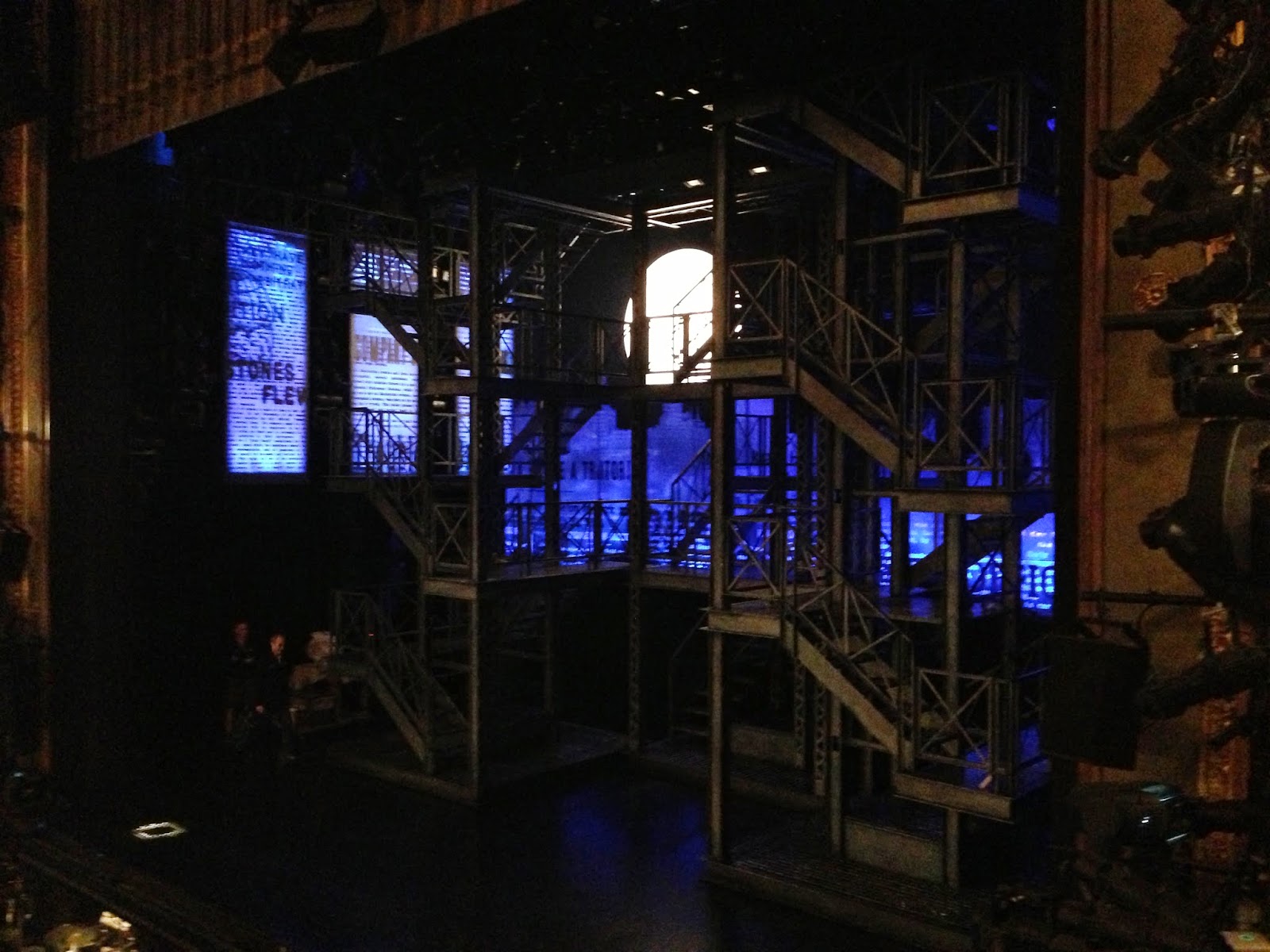 The often used three tier set  was perfect for us in the balcony. Many songs were sung at our level and in close range. 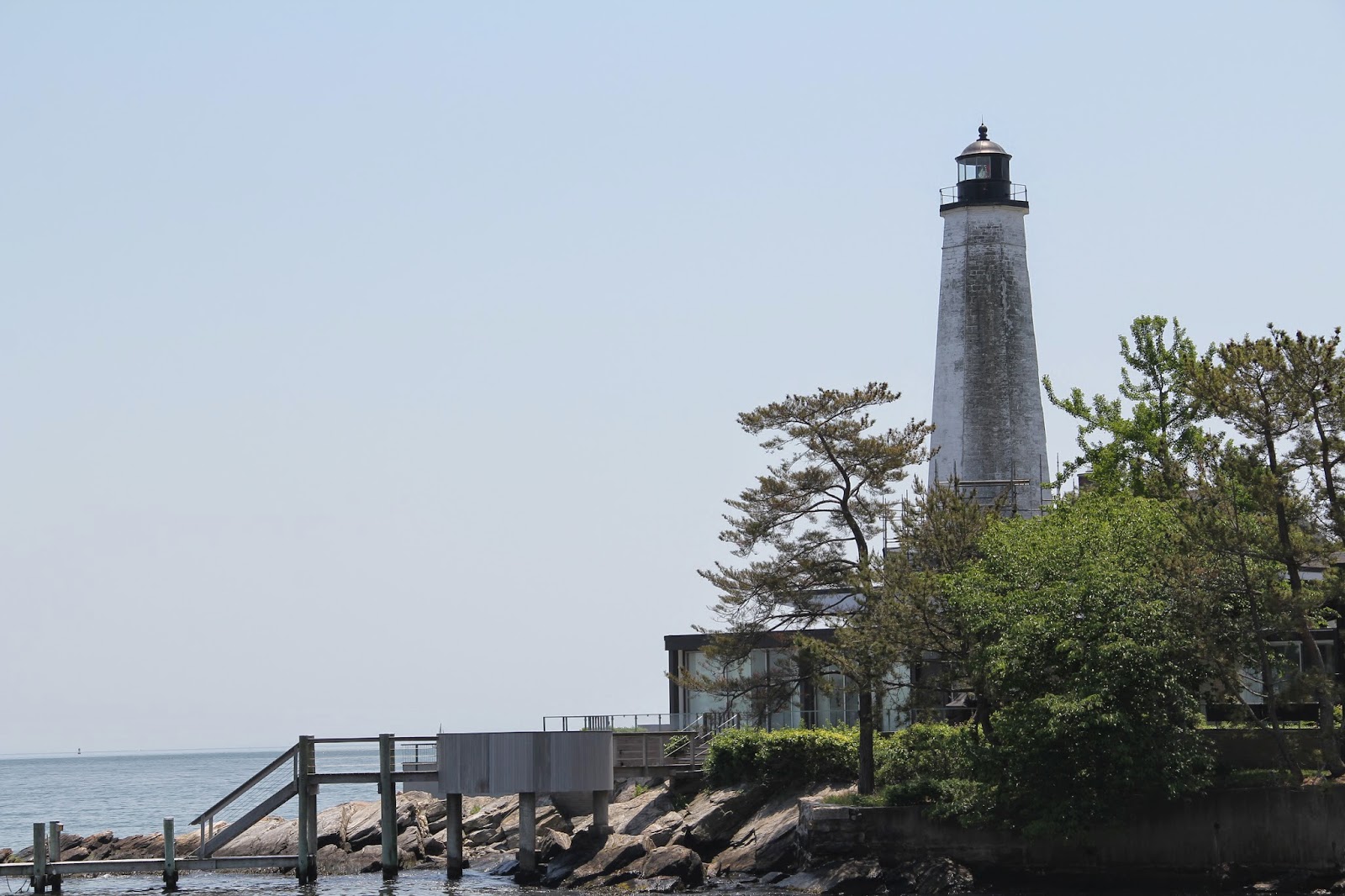 It was another late night (extended by a slow walk up Broadway with stops in the M & M and Hershey stores (we bought nothing!) so we got a later than hoped for start. We drove I-95 through Connecticut and Rhode Island (the kids watched a DVD of Johnny Tremain) to Boston where we are staying with Marie's sister and her family. Our one stop was in New London to see a light house and enjoy the option of some local cuisine (scallop roll for me). 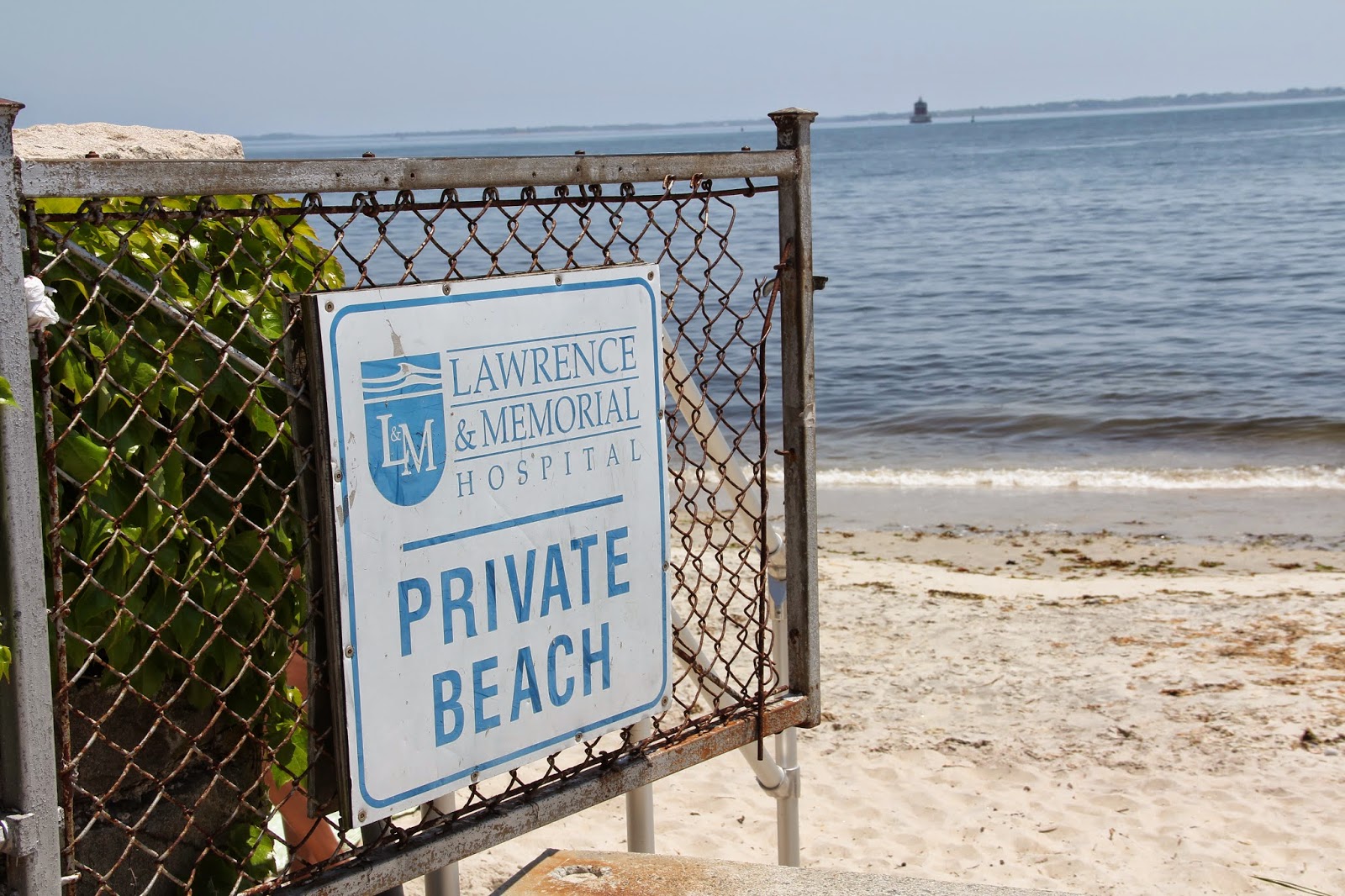 In researching beaches and light houses in Connecticut to visit I found that many beaches claim to be private (all beaches in the US are public lands) and public beaches (where some of the nicer light houses are located) charge out-of-staters extra to visit.

For a humorous Michael Moore produced TV Nation report on the "private" beaches of Greenwich CT watch this: click here. I like to show this in my political geography class when discussing territoriality.

The light house stop was in honor of my parents who served as LDS missionaries in Waterbury Connecticut. A lighthouse was a symbol of their mission. 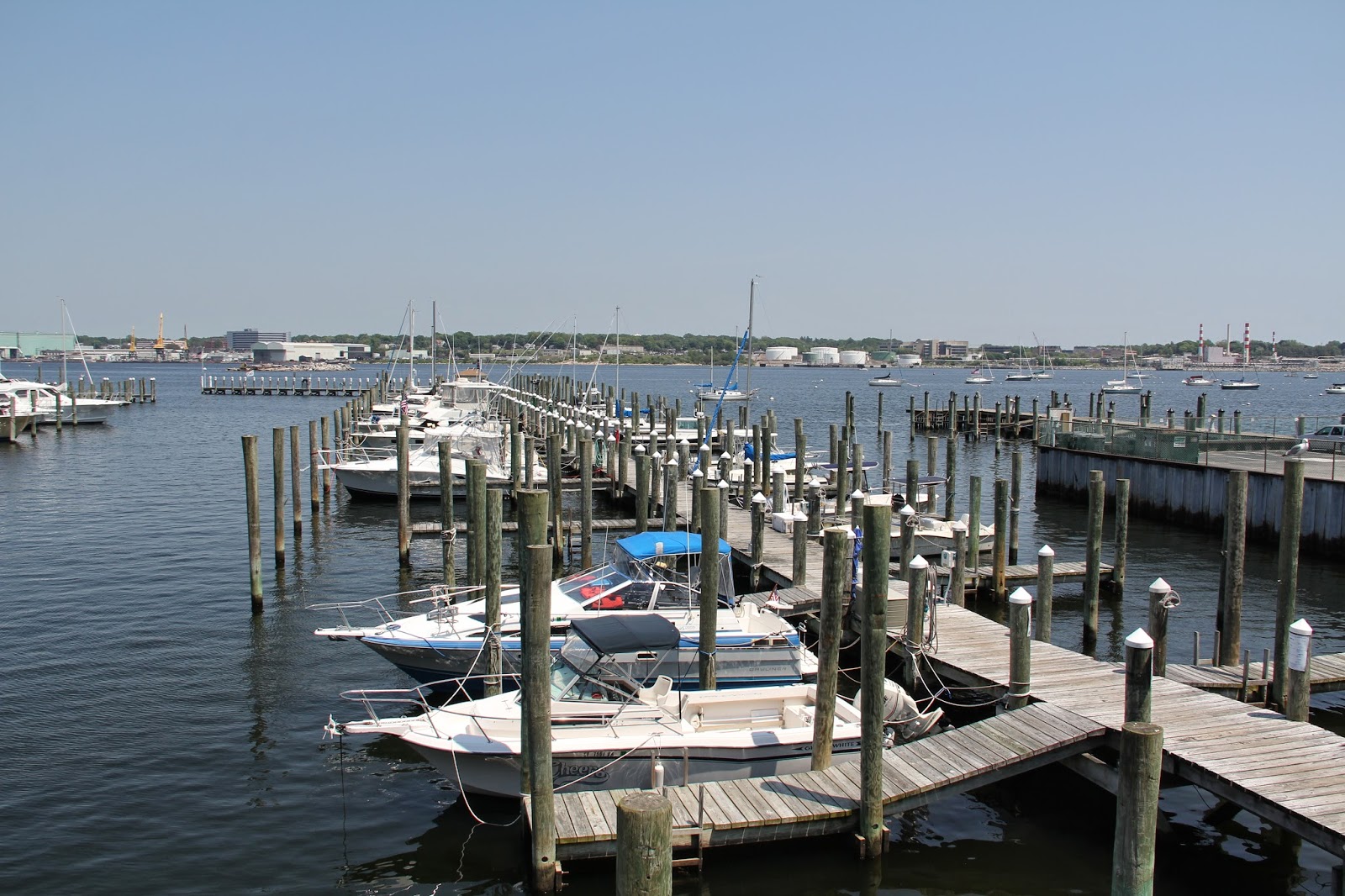 New London harbor at the mouth of the Thames River. 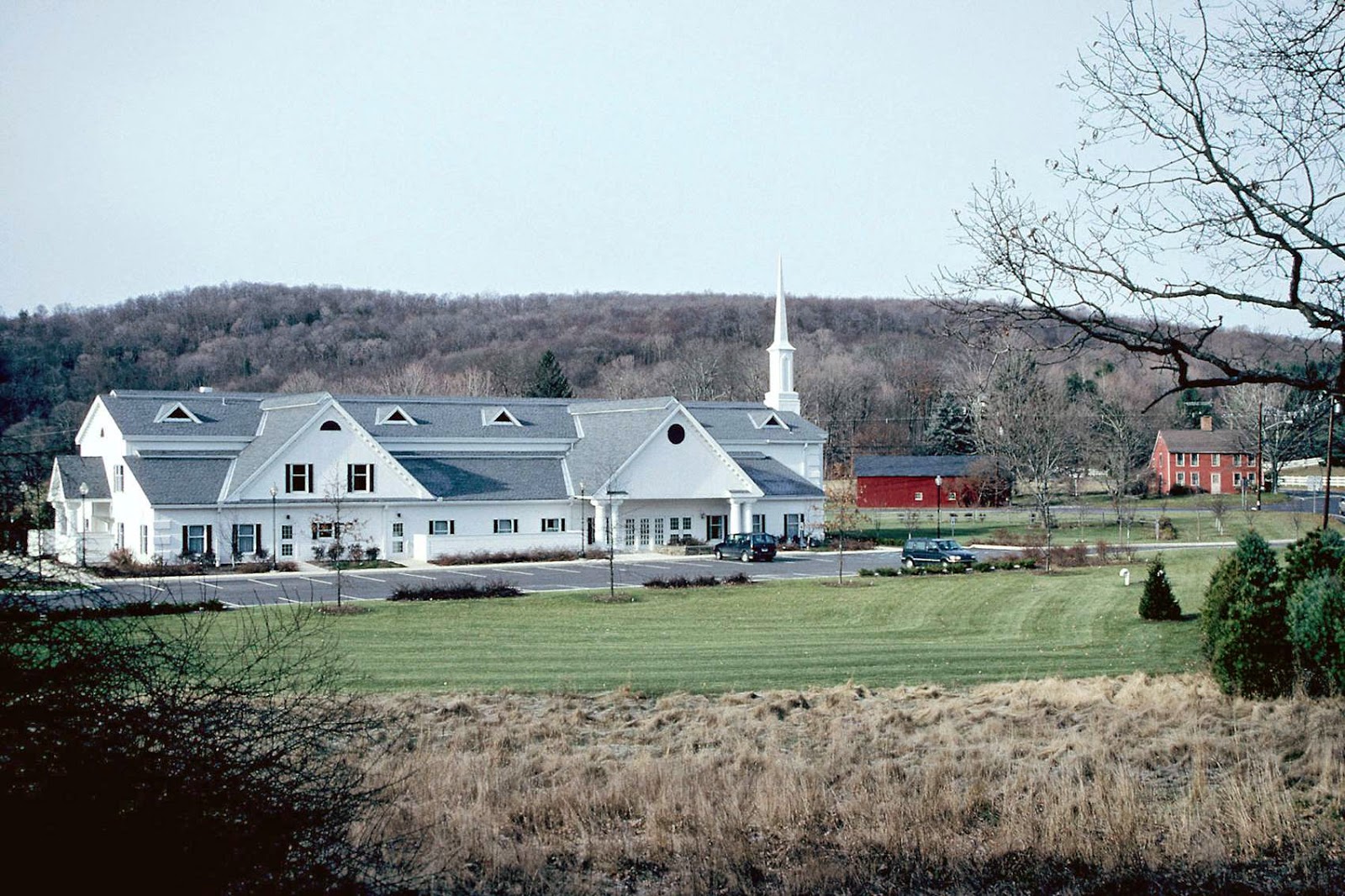 If we had had more time I might have taken the family to see a few sites from my last trip to Connecticut. In 1996 I visited my missionary parents in Waterbury for Thanksgiving. Dad wanted to show me some of the local sites so along with covered bridges and a light house, he took me to see this unique, somewhat odd looking, LDS Chapel in Southbury. When the standard centrally planned LDS Church-house plan was presented to the planning commission it was reject for not looking New Englandish enough. The plan was revised to include white paint and a Congregational Church looking steeple. This proposal was also rejected. Still not good enough and not New England enough, false gables and pillars were added and then the plan was approved.

Mom and Dad also took me to the Mohegan Sun casino on the Mohegan Indian Reservation. I was interested to see it from an academic point of view as an example of Native American sovereignty issues. Mom was against the idea, but consented only if they removed their missionary name tags first. Dad gave me two quarters. I played the slots and won $1. I gave the money back to dad, he gave it a try and lost it all! Then we were done. 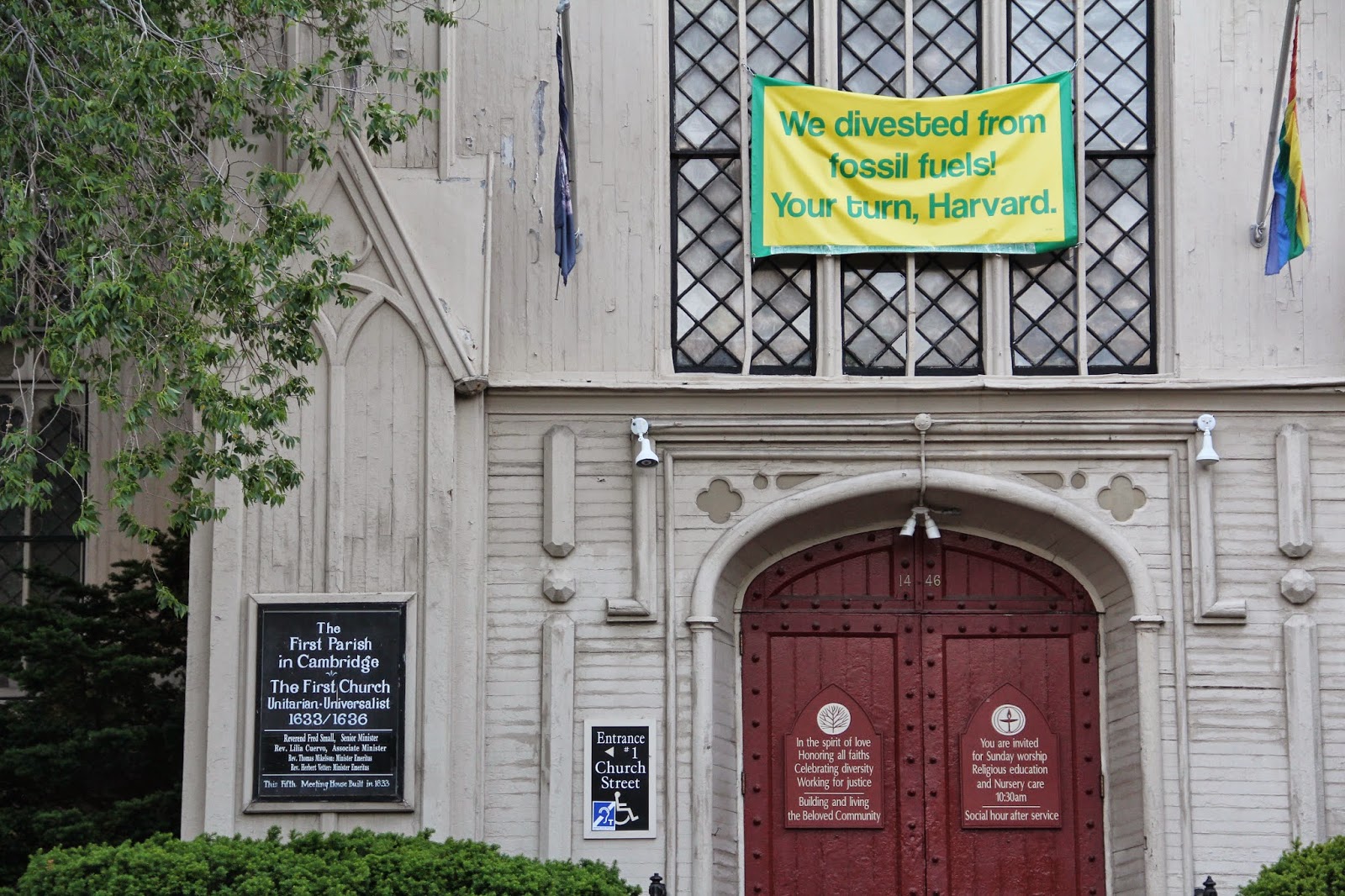 Once in the Boston suburb of Belmont we enjoyed a walk down to a pond, home cooked food and then a drive to Harvard University in Cambridge. This Unitarian church is calling on Harvard to divest its investments in fossil fuels.  Similar divestment campaigns helped bring an end to apartheid and currently there is a divestment campaign against Israeli occupation of Palestine. Don't see many banners calling for divestment on churches in Utah! 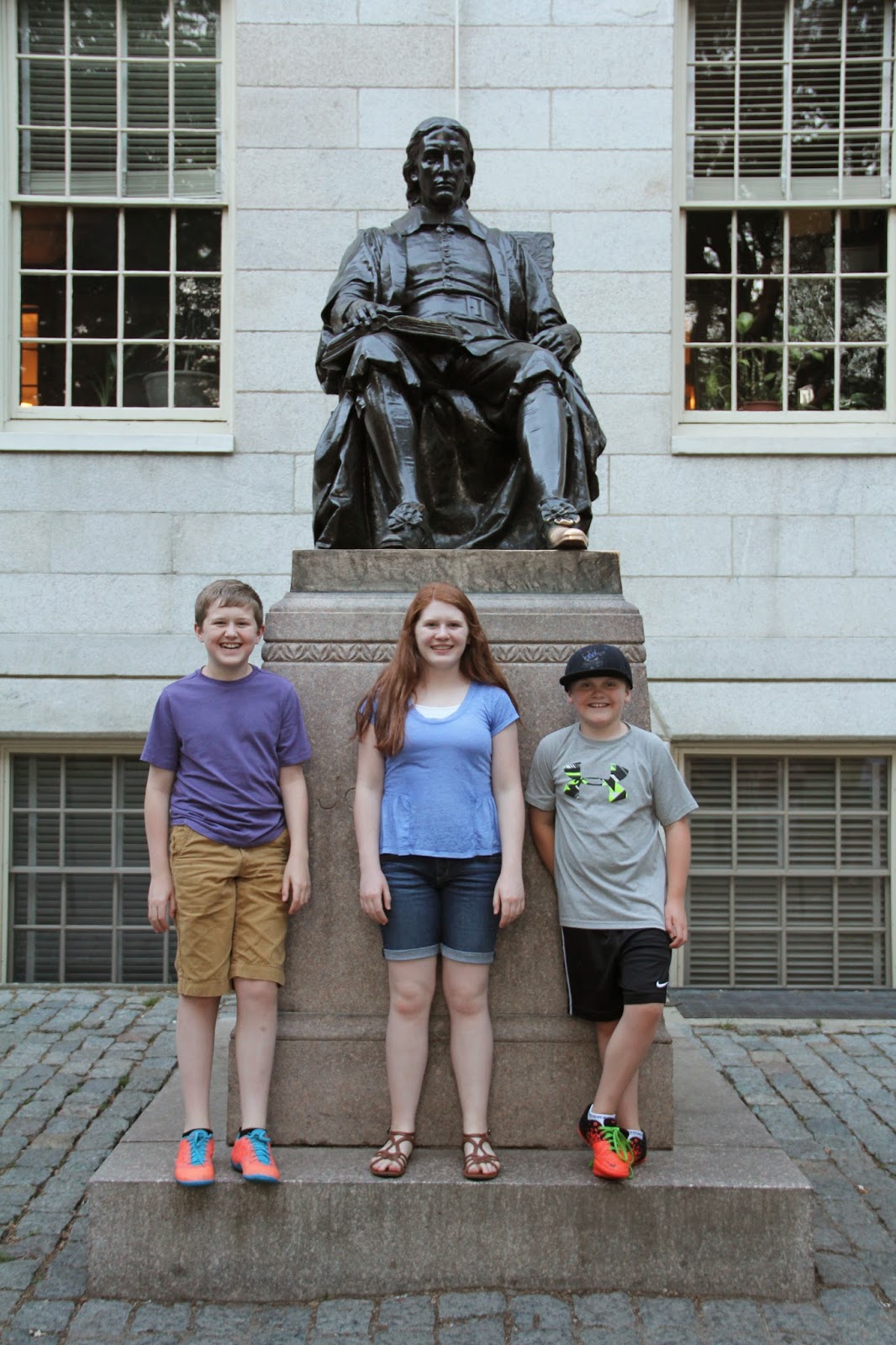 In front of the statue of Harvard's founder. Students like to rub his brass toe for  good luck before exams. Uncle Kirk noted that rivals at Yale are prone to urinate on the toe! 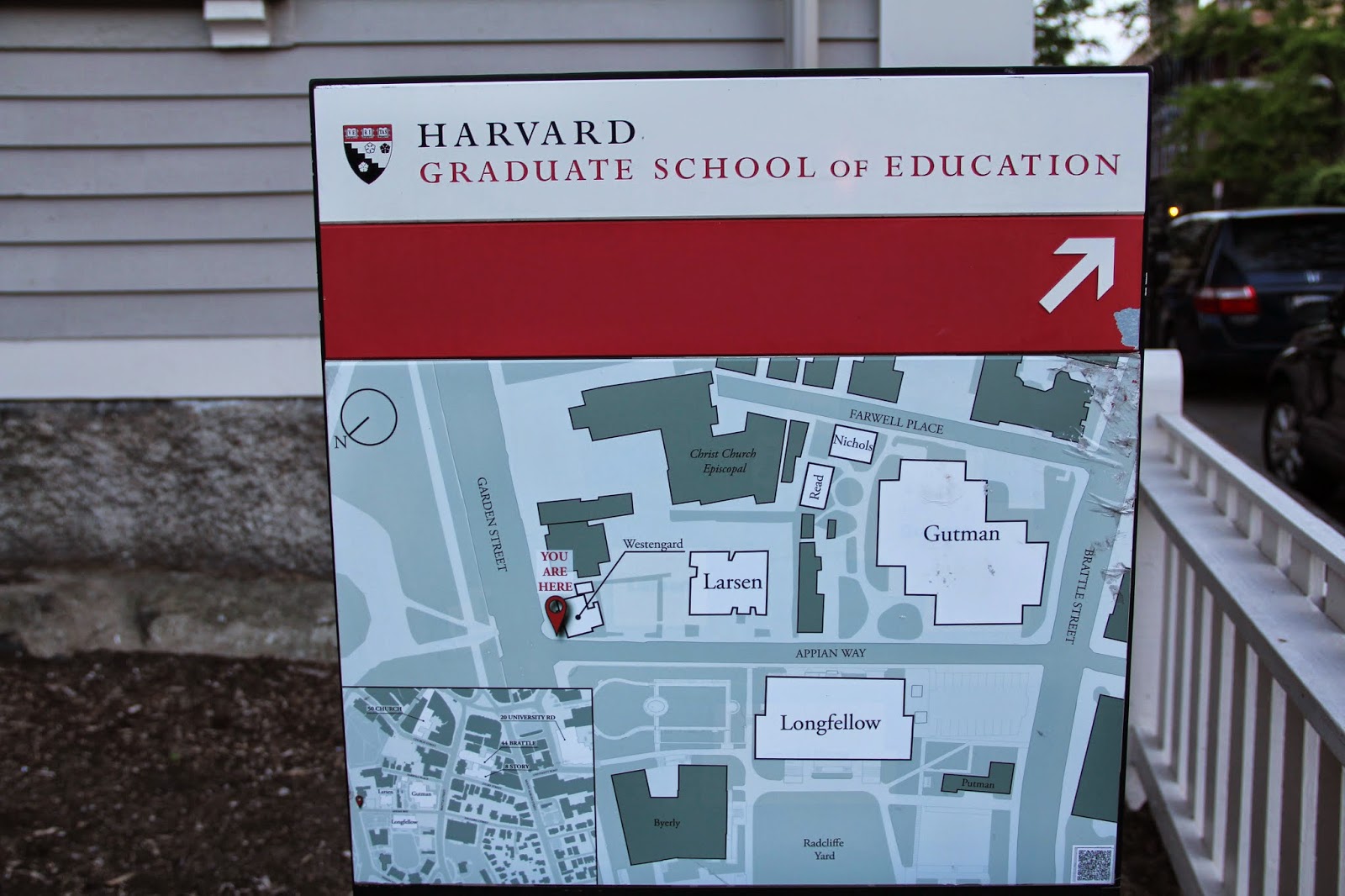 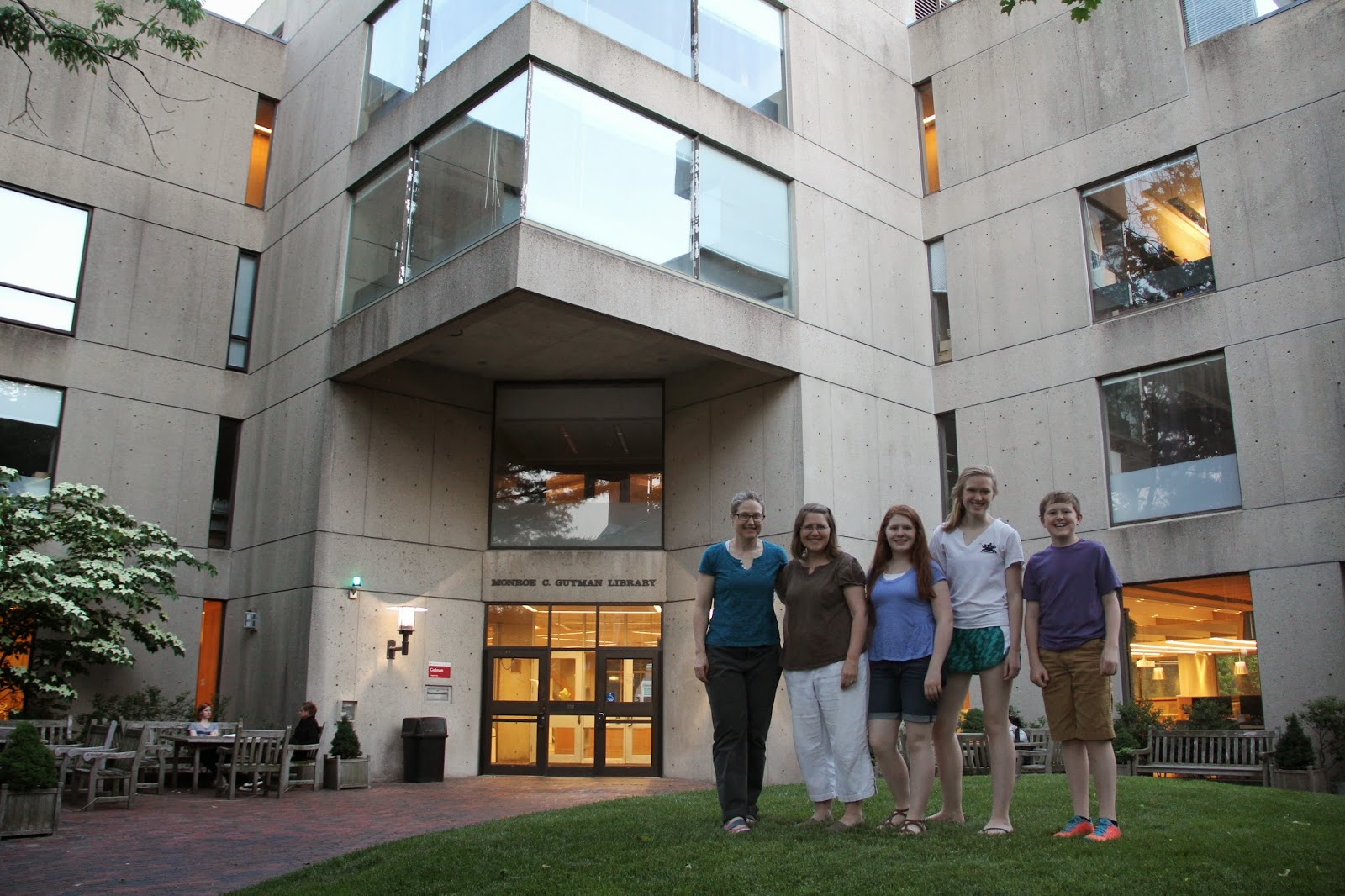 Marie in front of where she spent most of her time completing her MA in higher education from Harvard. Not only did that degree get her a job as an admissions counselor at BYU. But it has helped in other ways more recently. Last year when she applied for a job as a teacher's aid at our local elementary school, the principal called to offer her a job without even bothering to interview Marie. When Marie asked about why there wasn't an interview the principal responded "Hello! Harvard!" Soon after we moved to Springville 16 years ago Marie was called to serve in the nursery at church (also her current calling). She soon started to propose changes. Some in the primary were not happy to have the boat rocked. Then one member of the presidency who had gotten to know Marie, told the other members of the presidency: "You should listen to her ideas, after all she has an MA in education from Harvard!" Never mind that the degree was in higher education, the mere mention of Harvard brought great respect which allowed master nursery leader Marie to work her magic. 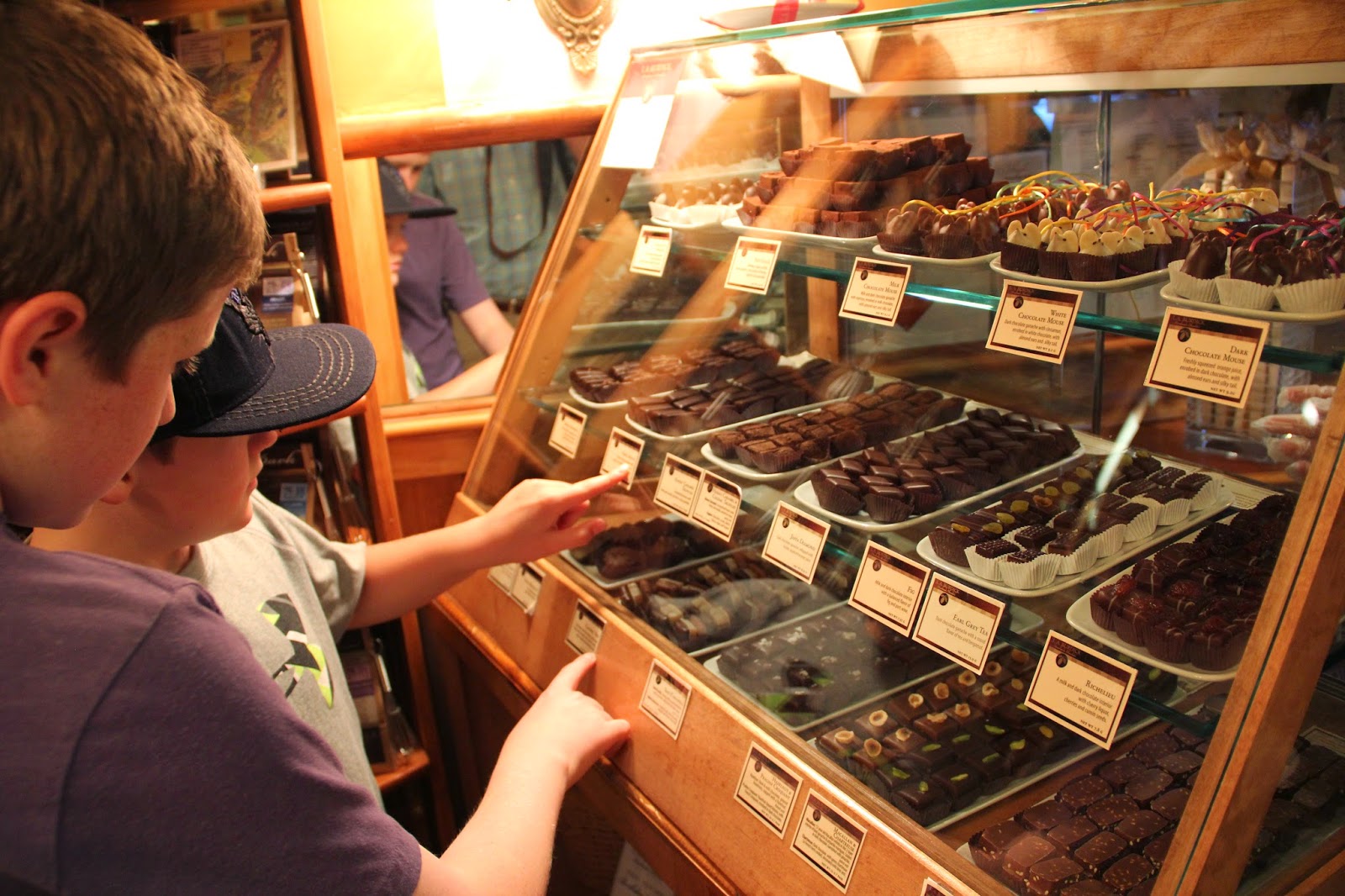