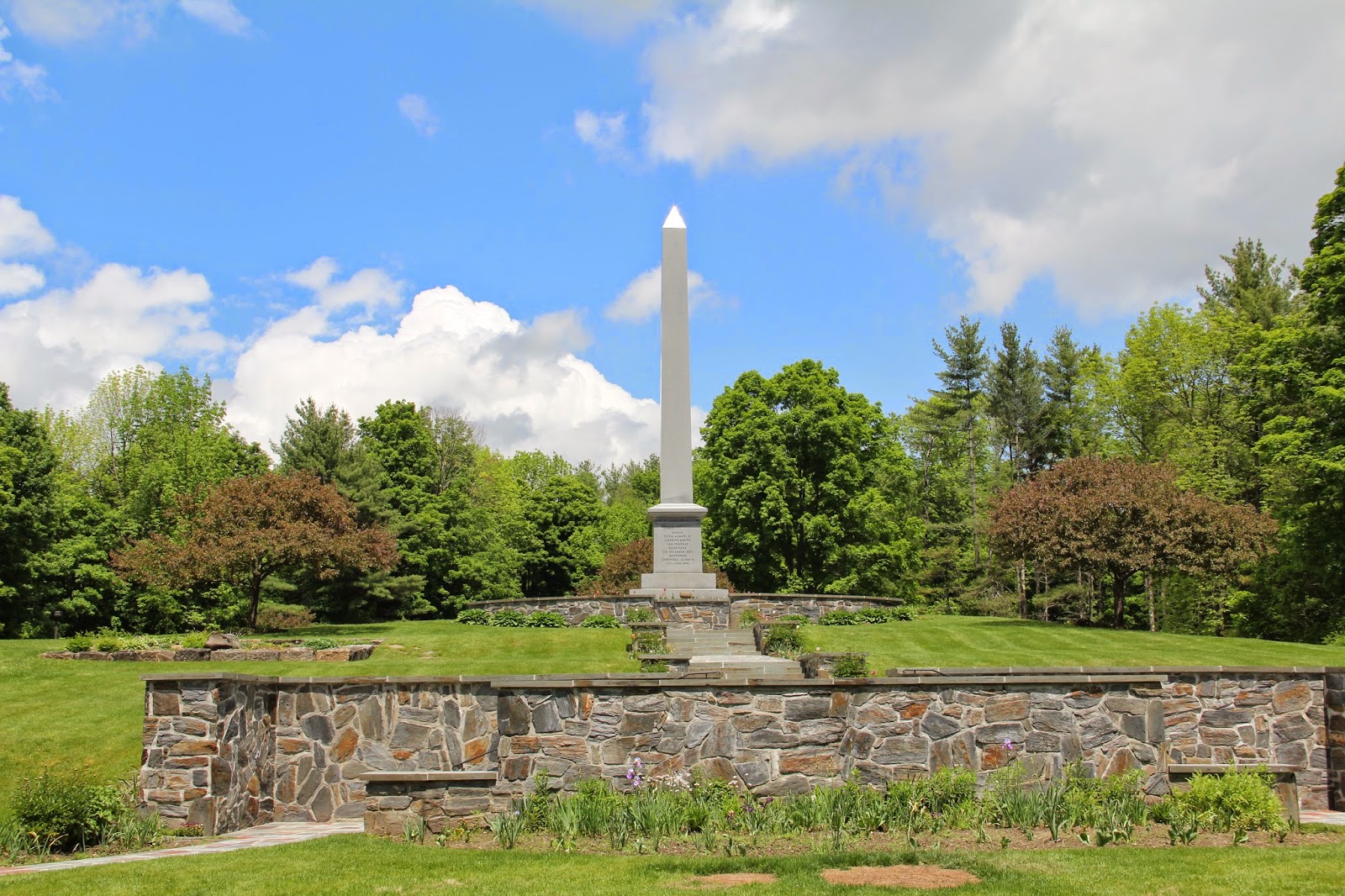 Today we headed north to Sharon Vermont, he birthplace of Joseph Smith. The memorial obelisk (installed with great effort in 1905) marks the site of the Smith home where Joseph was born on December 23rd 1805. Sister Like came inside the visitor center to have us come out and see how the top pyramid brightly reflects the sunlight at certain times of the day. 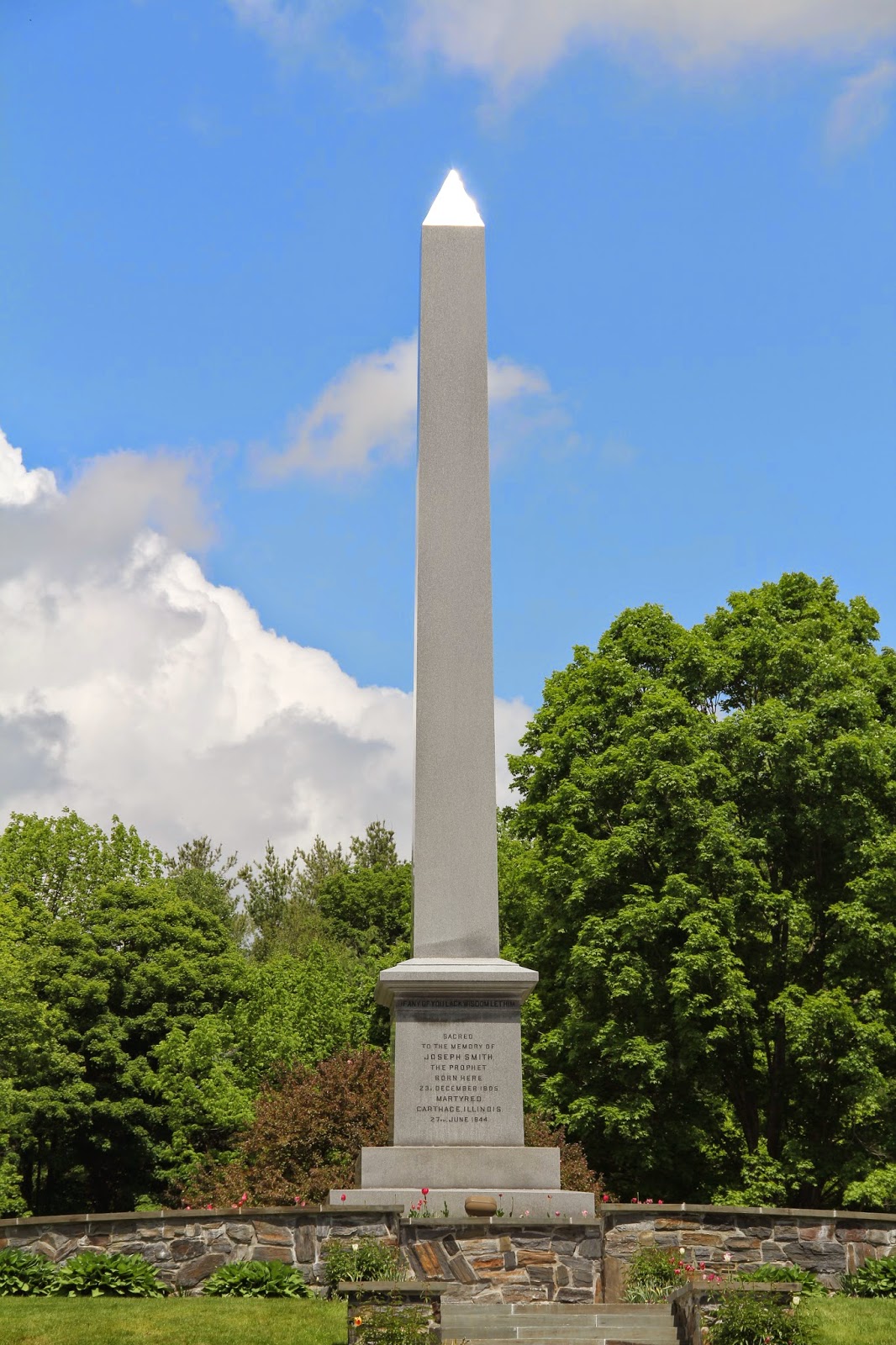 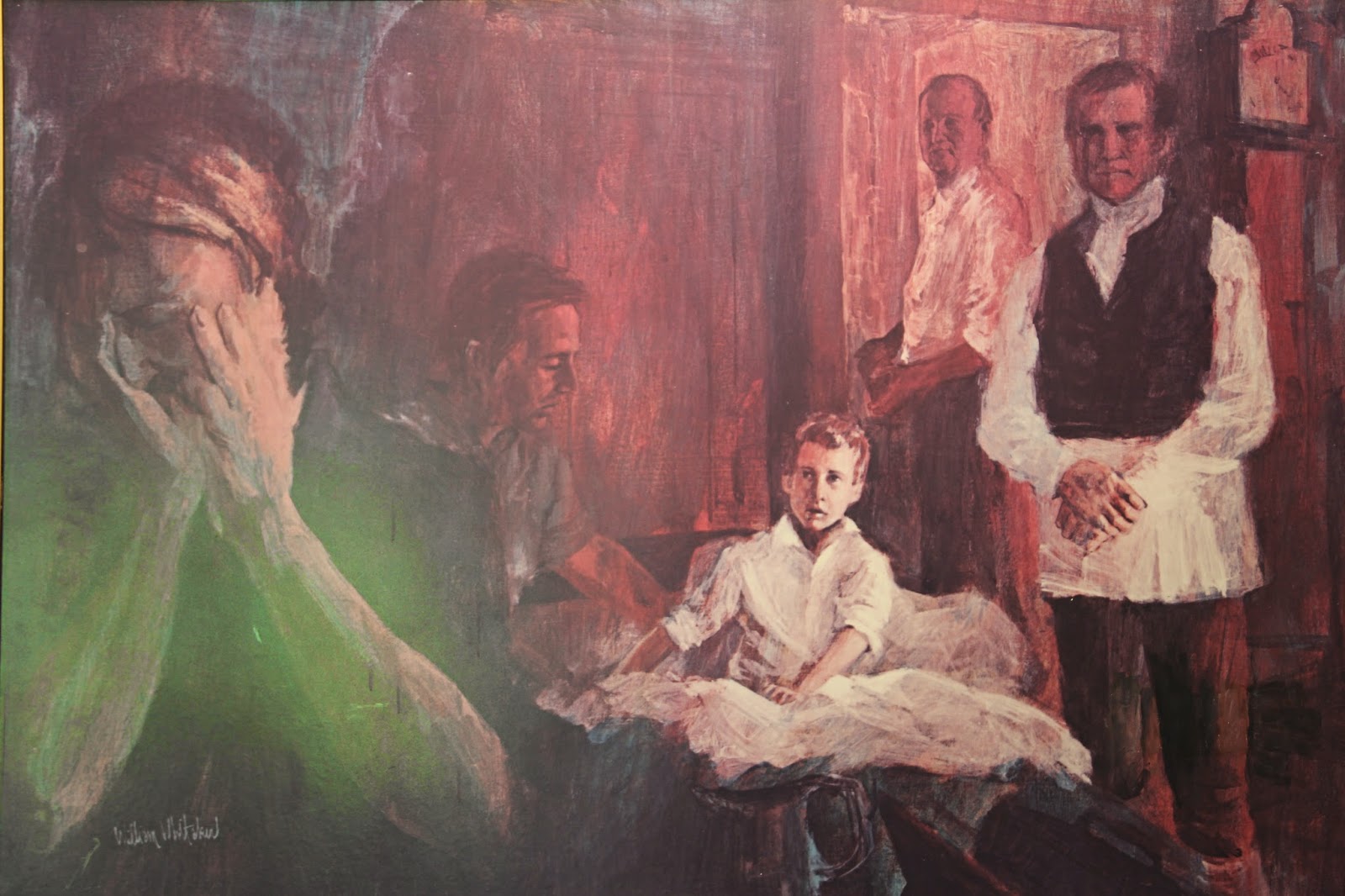 Happily Elder Like catered his tour to our kids. Will was very reluctant to join in any form of guided tour and even stayed in the car for a little while. When he did come in, Elder Like captured his attention by telling the story of six year old Joseph having his leg operated on down to the infected marrow of his bone (a side effect from typhoid that had spread through the large family). A brave Joseph turned down any offering of calming/numbing alcohol. All he needed was his father to hold him down and his mother to leave the room so she would not see his suffering. At the time the Smith family was living in Lebanon New Hampshire just a few miles south of Hanover and Dartmouth College where faculty member Dr. Smith (no relation) was the pioneer founder of this type of leg surgery which was not yet being done anywhere else. The operation saved Joseph's life. 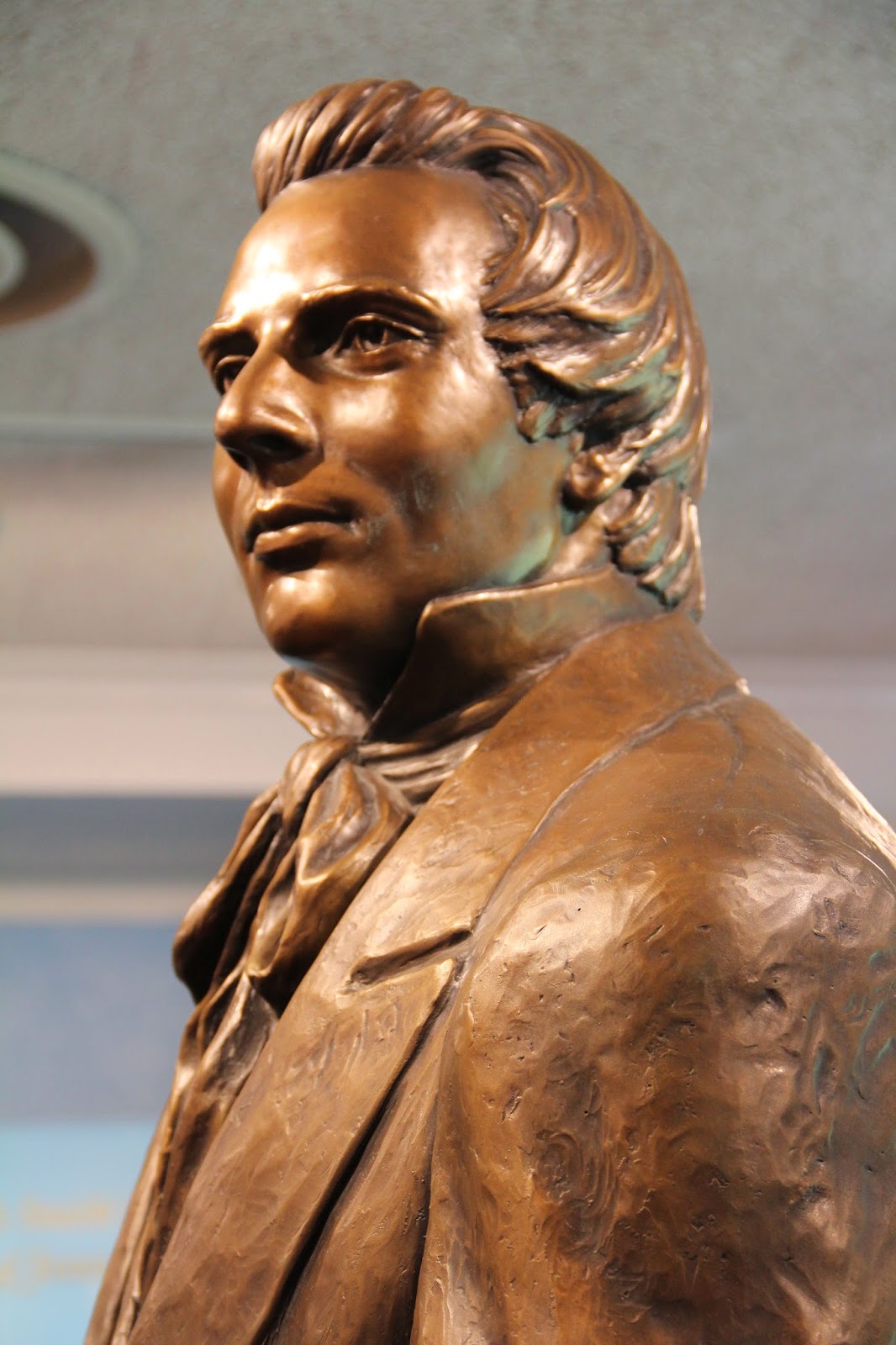 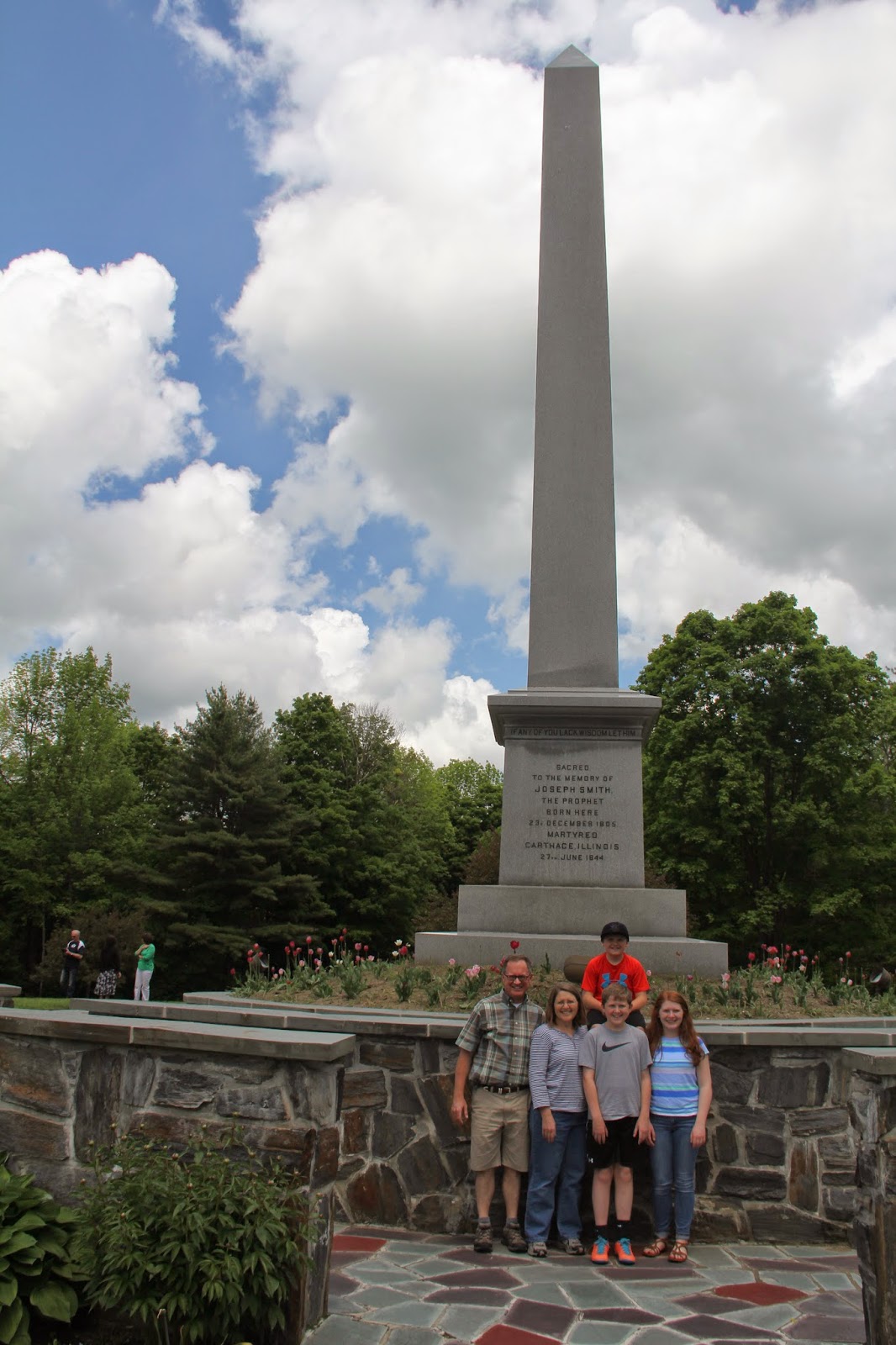 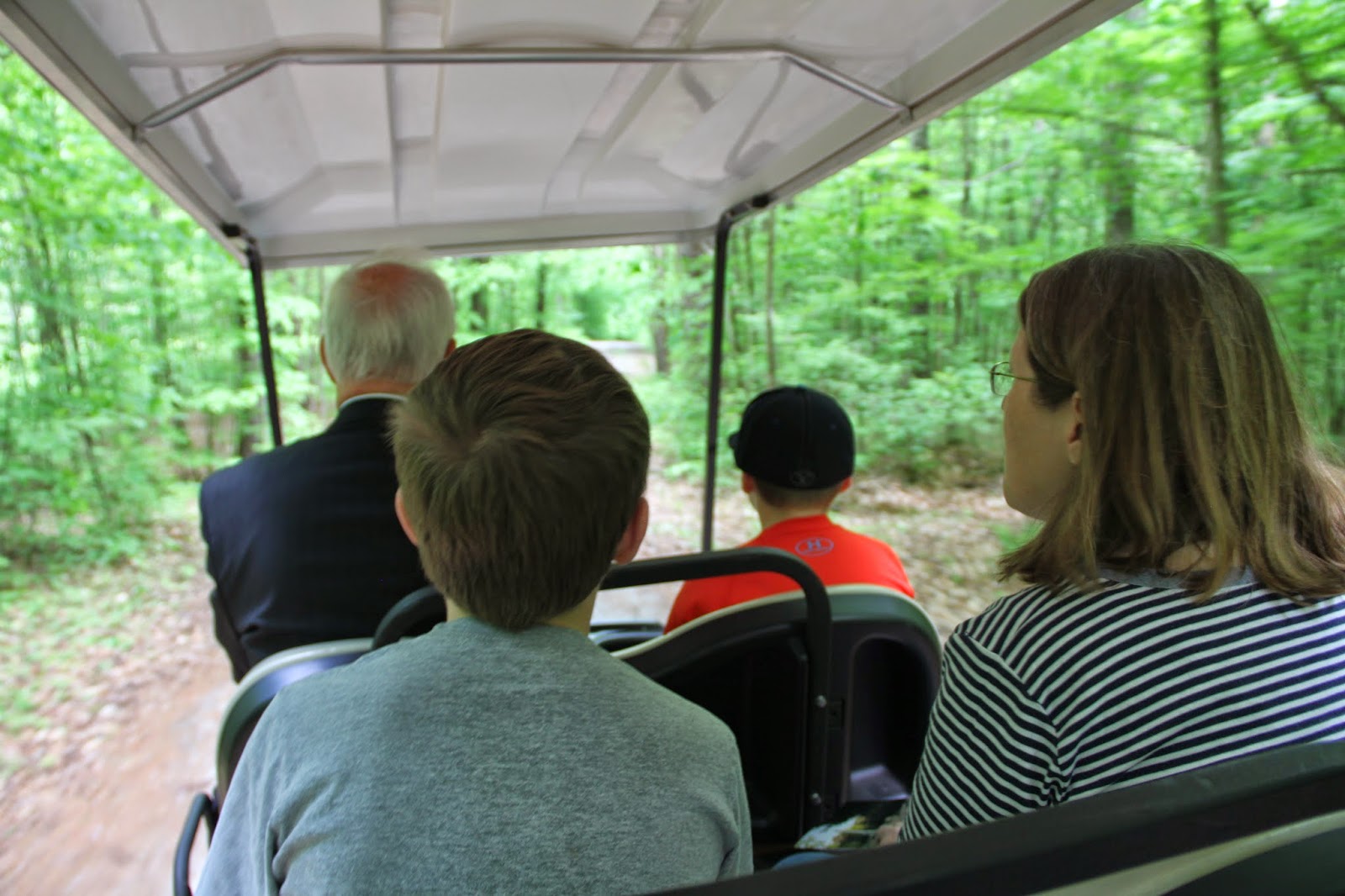 After offering to take a family photo, Elder Like asked if we would like a golf cart ride (he knows how to keep kids interested). Will perked right up. We "four wheeled" down the hill to the foundation site of Lucy Mack Smith's parents' and brother's home. 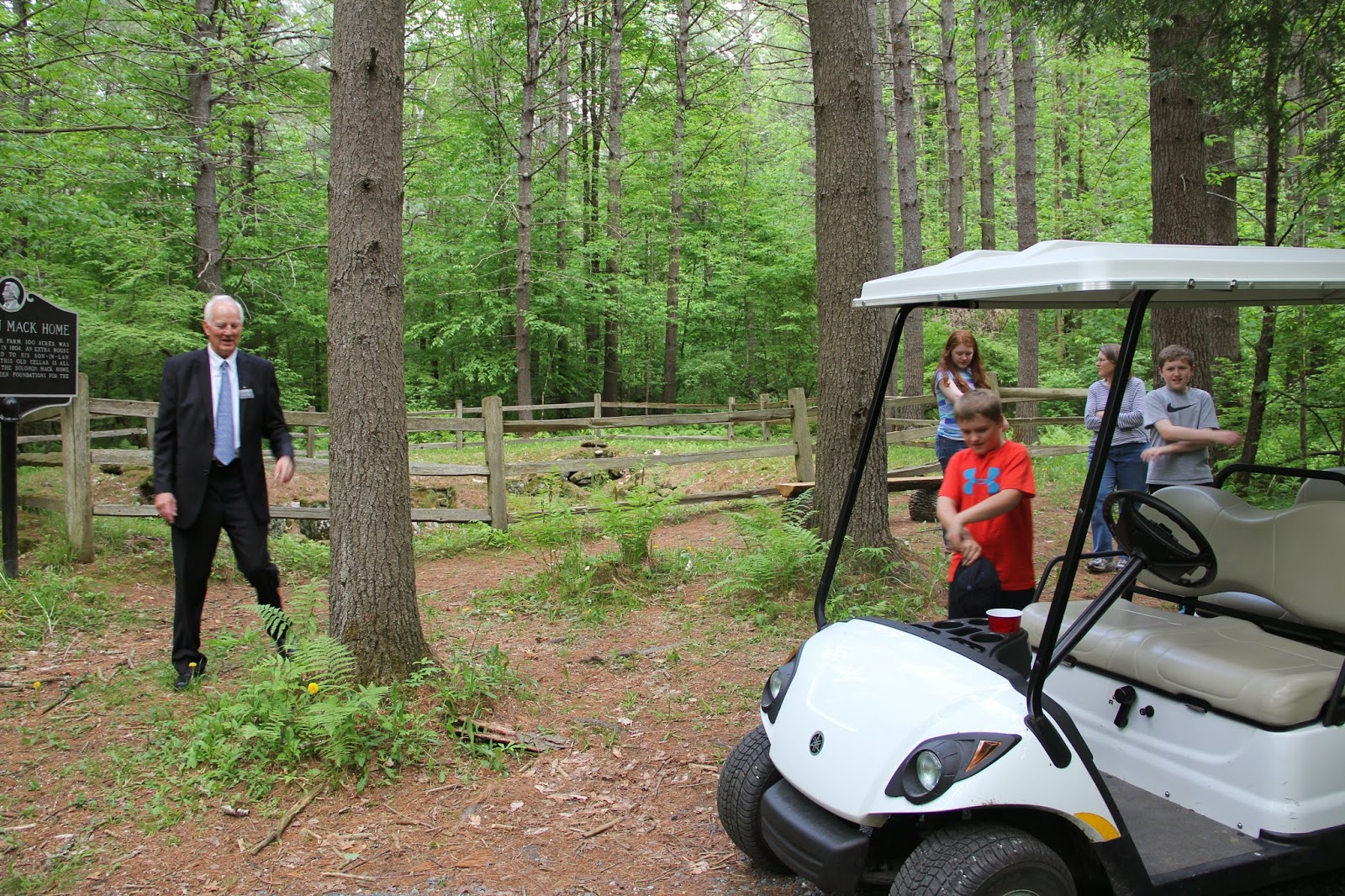 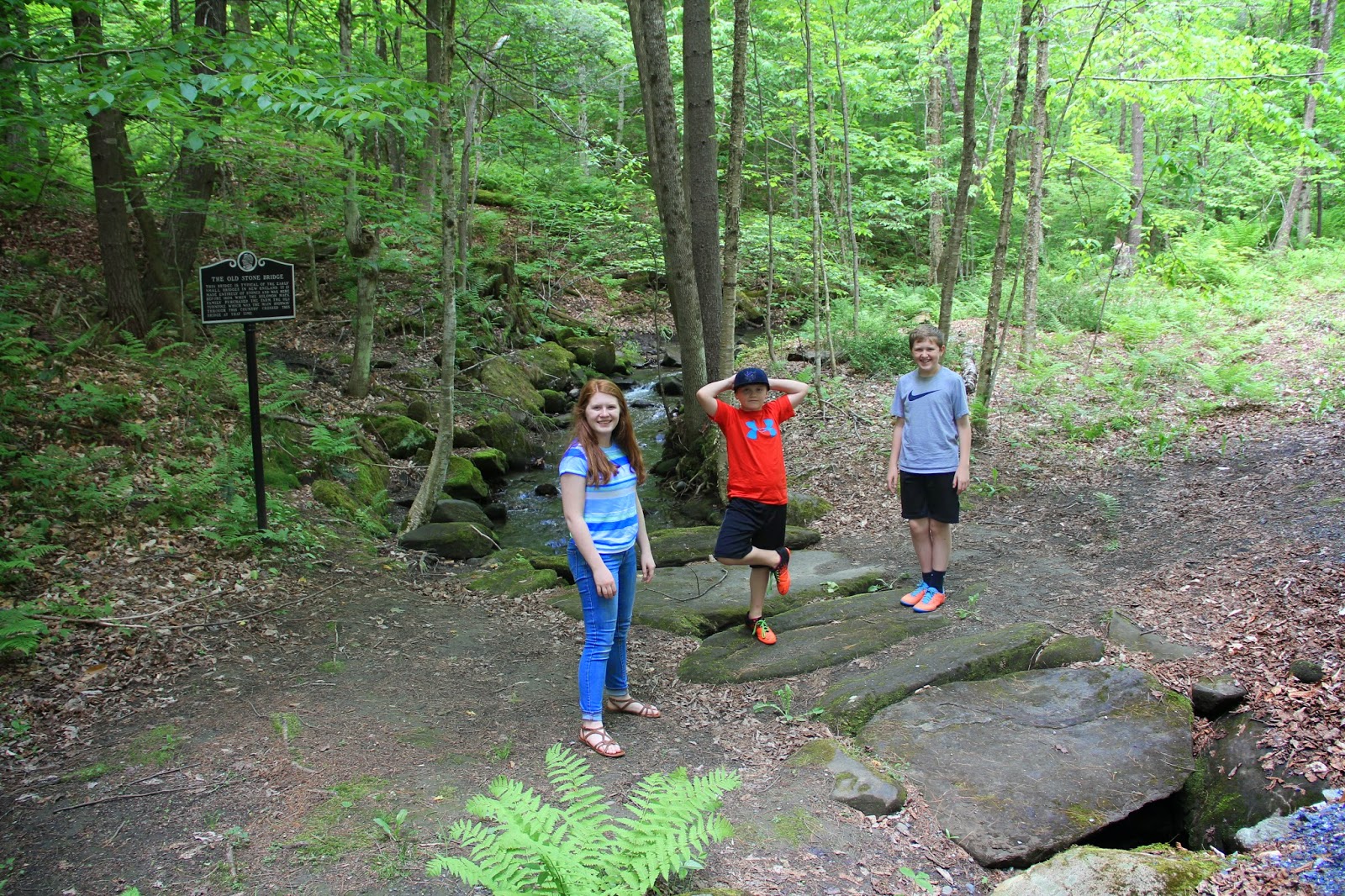 Here is an original stone bridge along the old pike road bed that ran beside the Mack homes. We then picnicked on supplies purchased at Trader Joe's in Belmont on our way out of town. 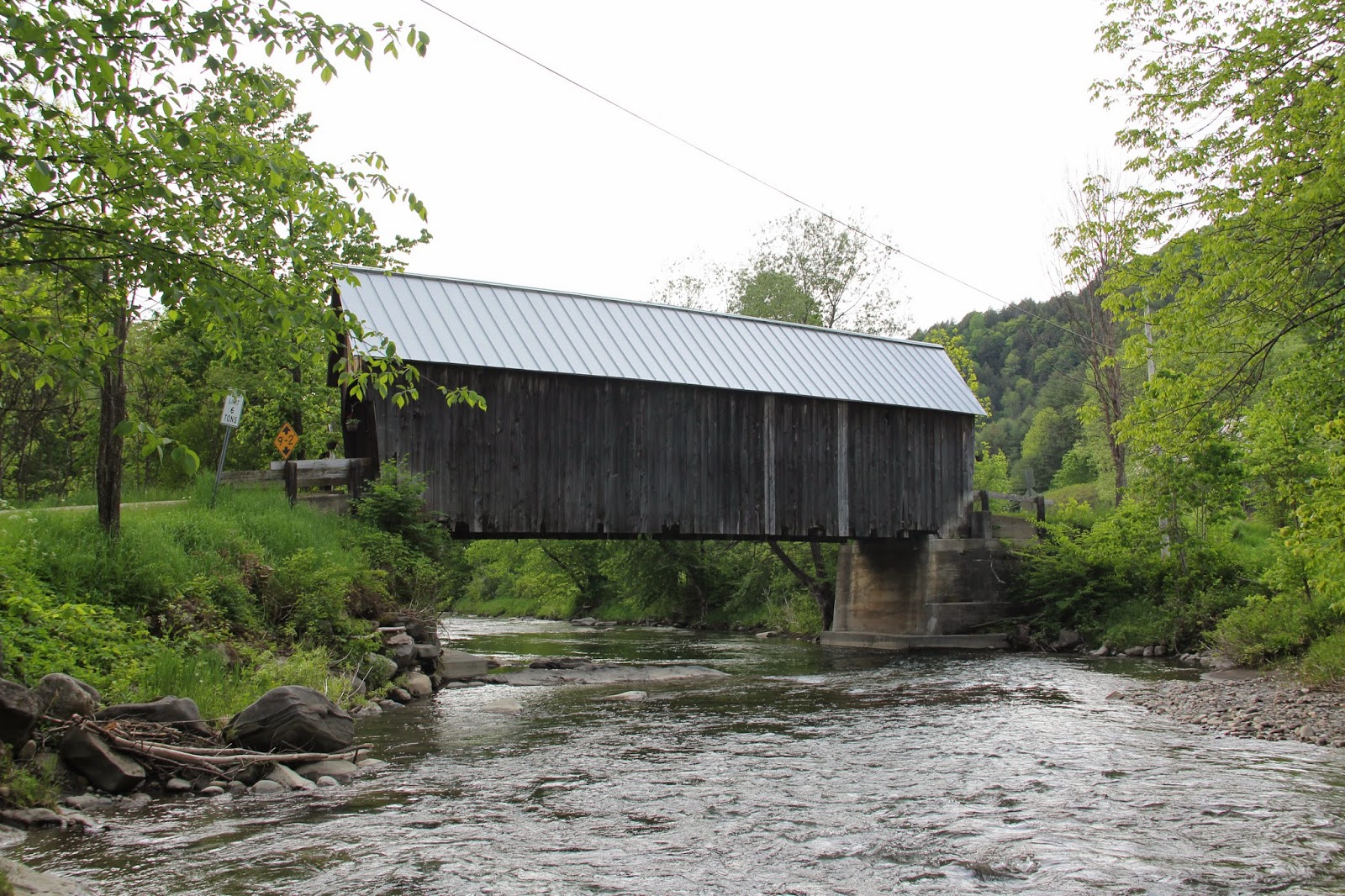 From there we headed north on 110 through Tunbridge where both the Smith and Mack families lived for a few decades and where Joseph Smith Senior and Lucy Mack met. Between there and Chelsea we visited three covered bridges. Two of them had great river banks for playing in. The kids and their dad had great fun taking photos, skipping rocks, exploring and discovering. 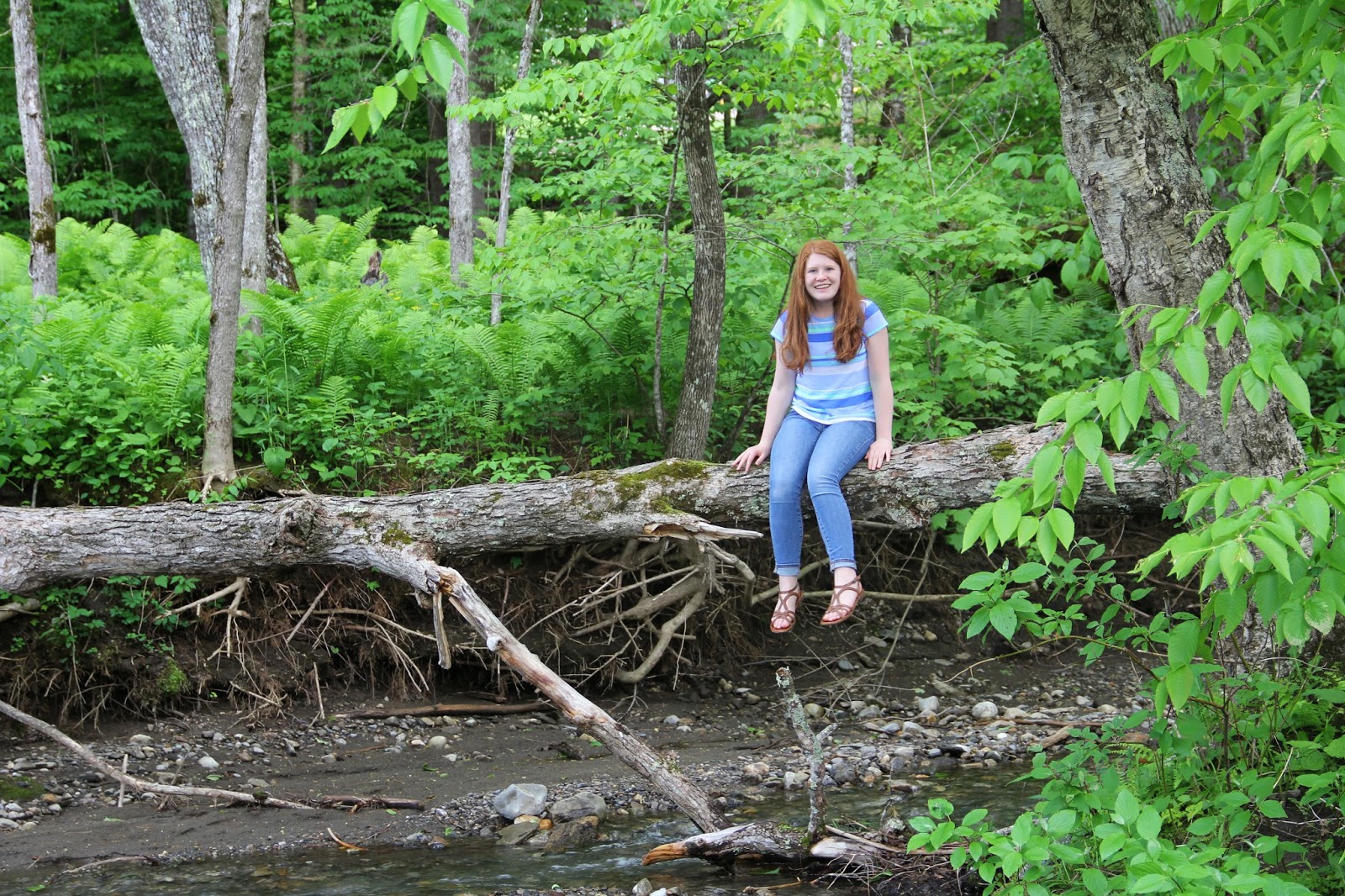 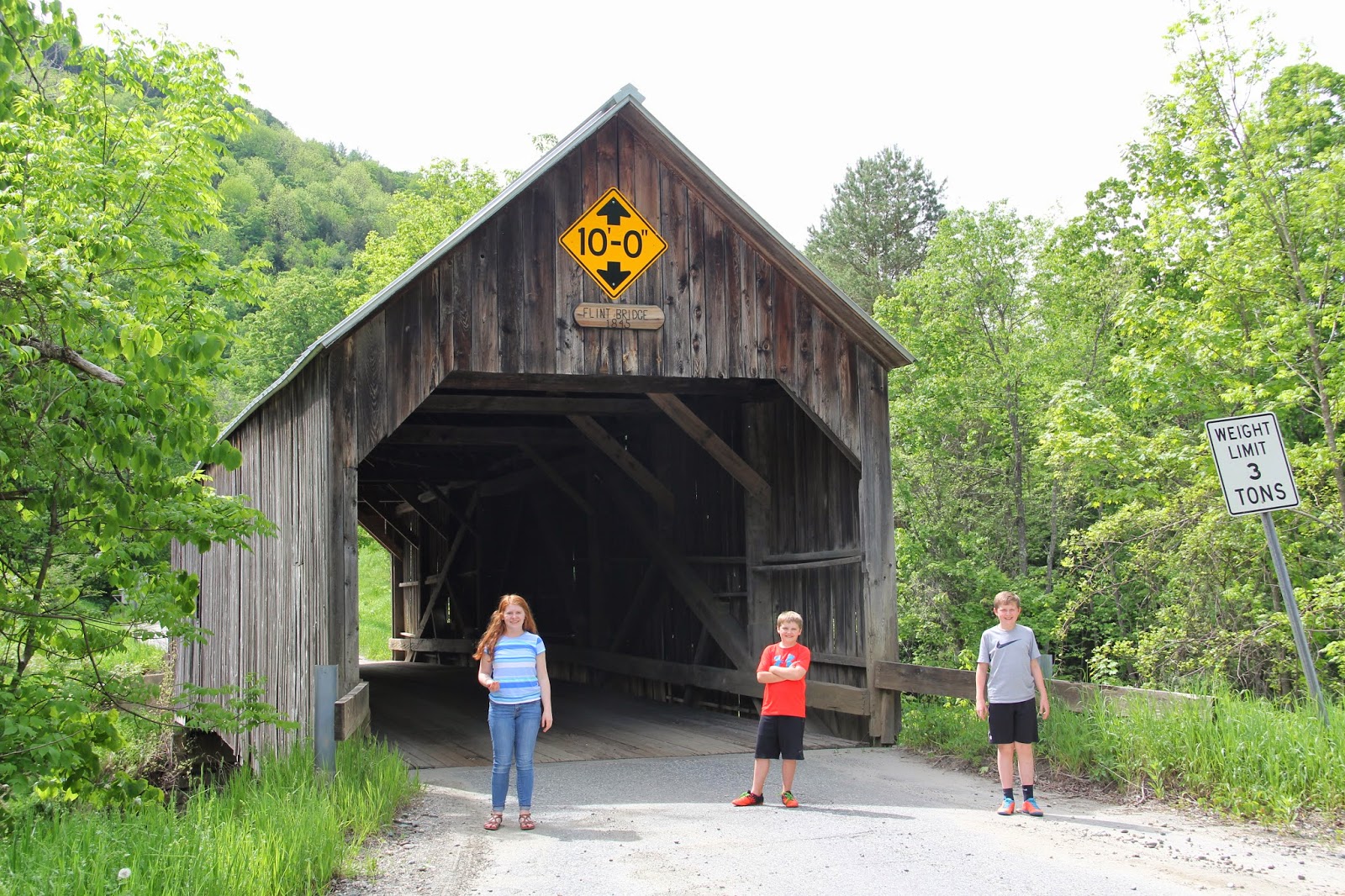 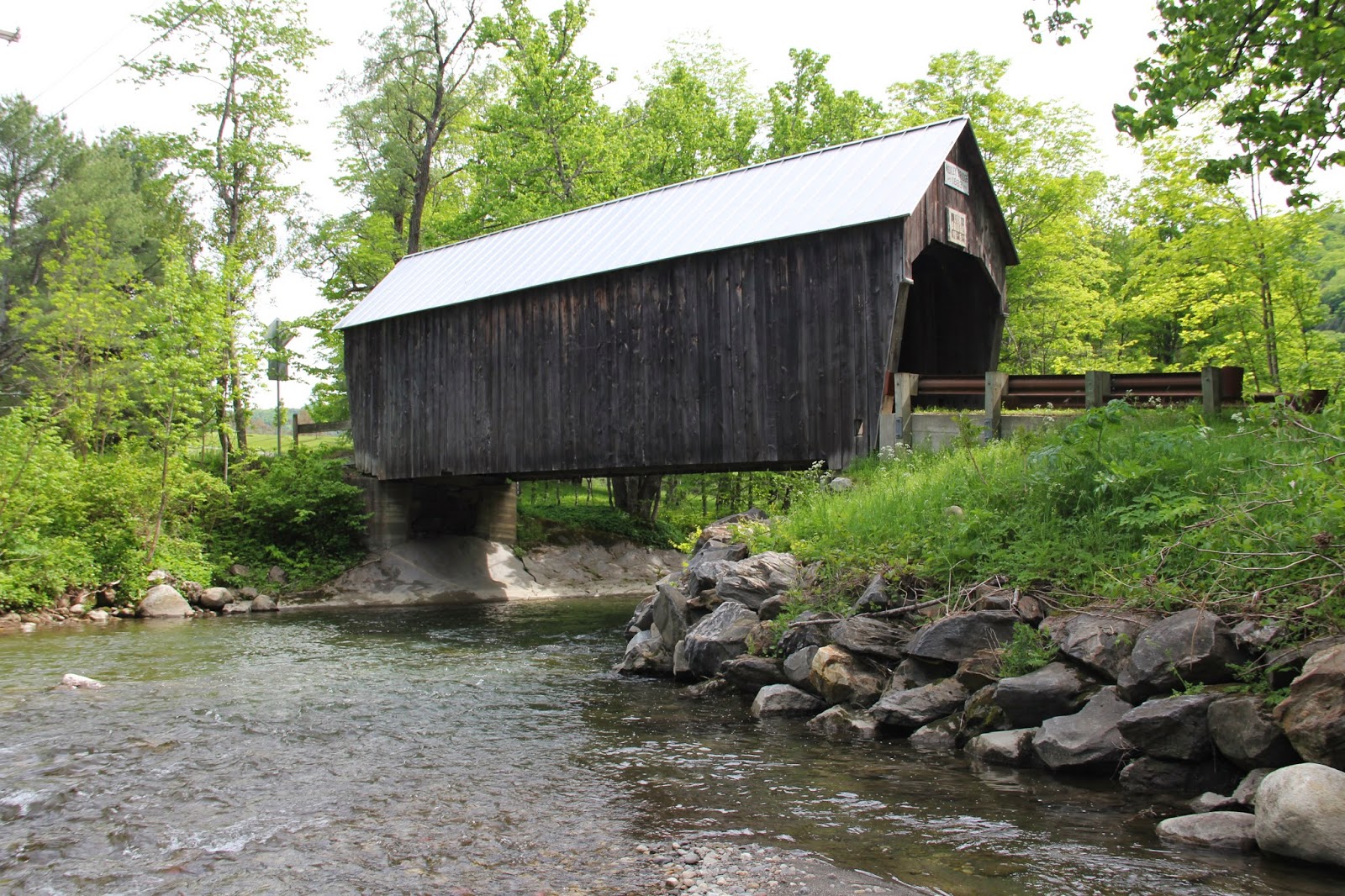 While looking for stones to skip Sarah discovered some green river glass (perhaps from an old 7-Up bottle). We then started to find all kinds of things. We felt like river archeologists: pottery shards, brick pieces, smoothed-edge glass pieces (brown ones from beer bottles?), an ocean shell and pieces of equipment. 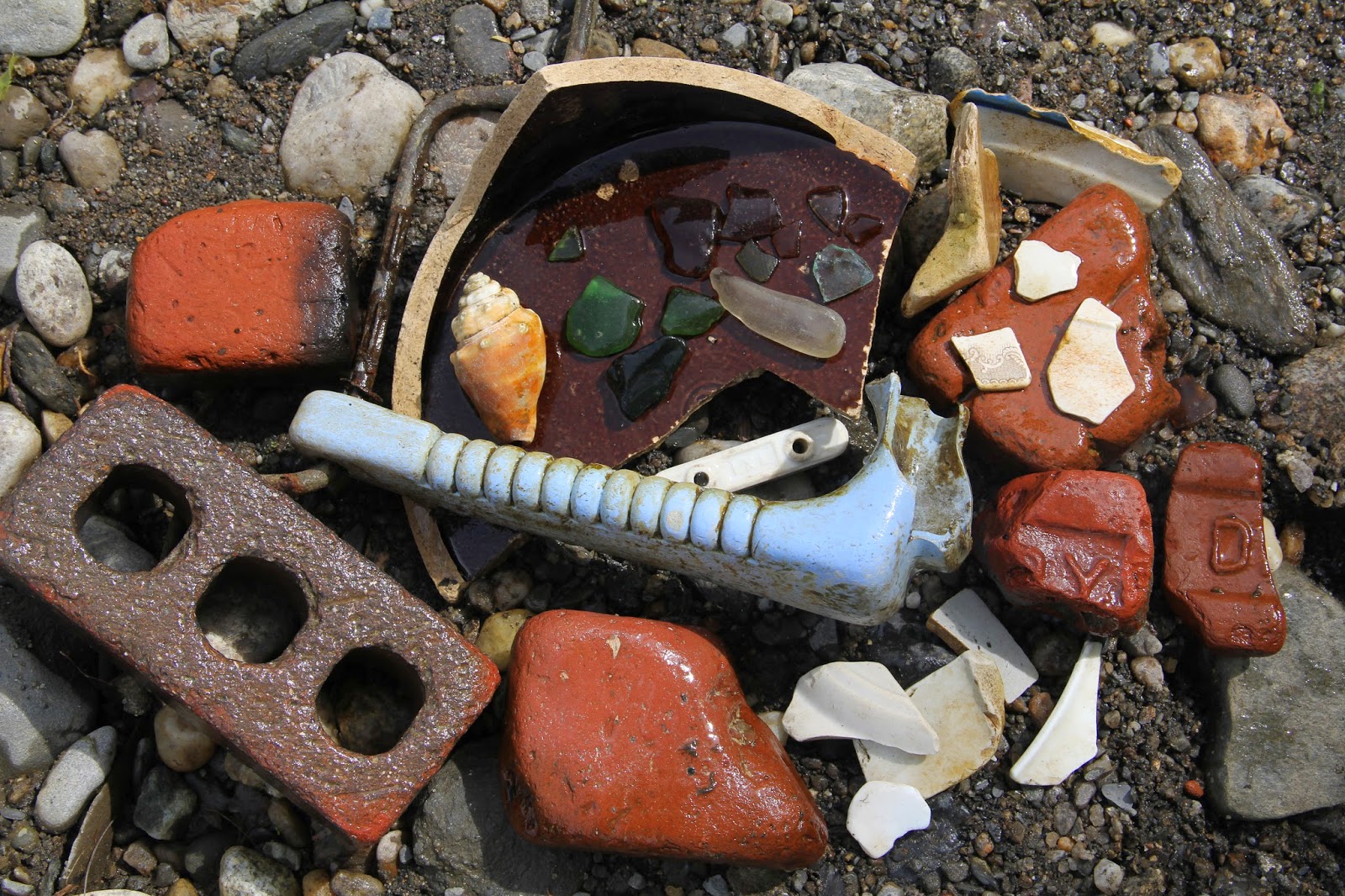 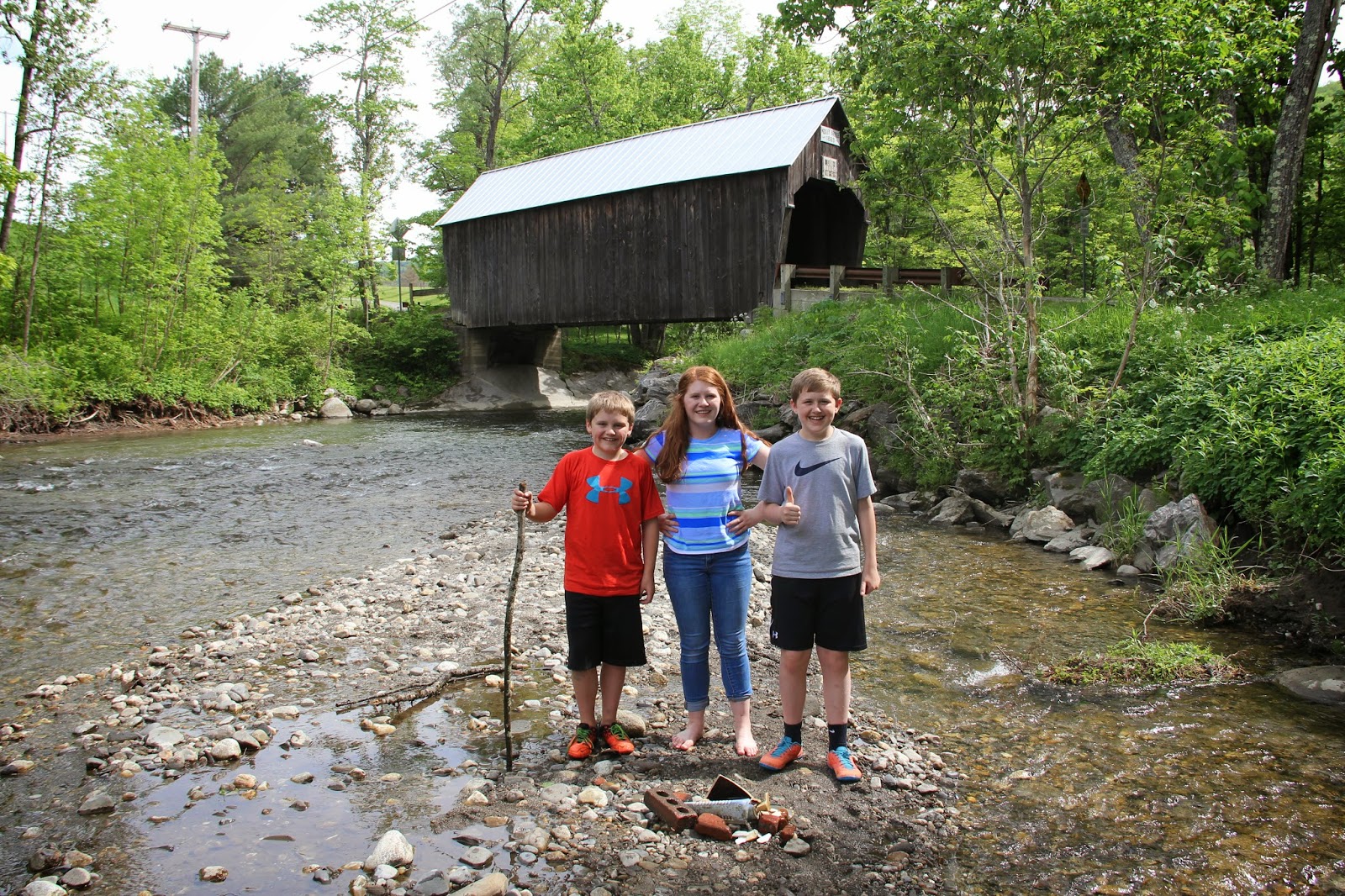 The excavation site. It was a fun impromptu activity. 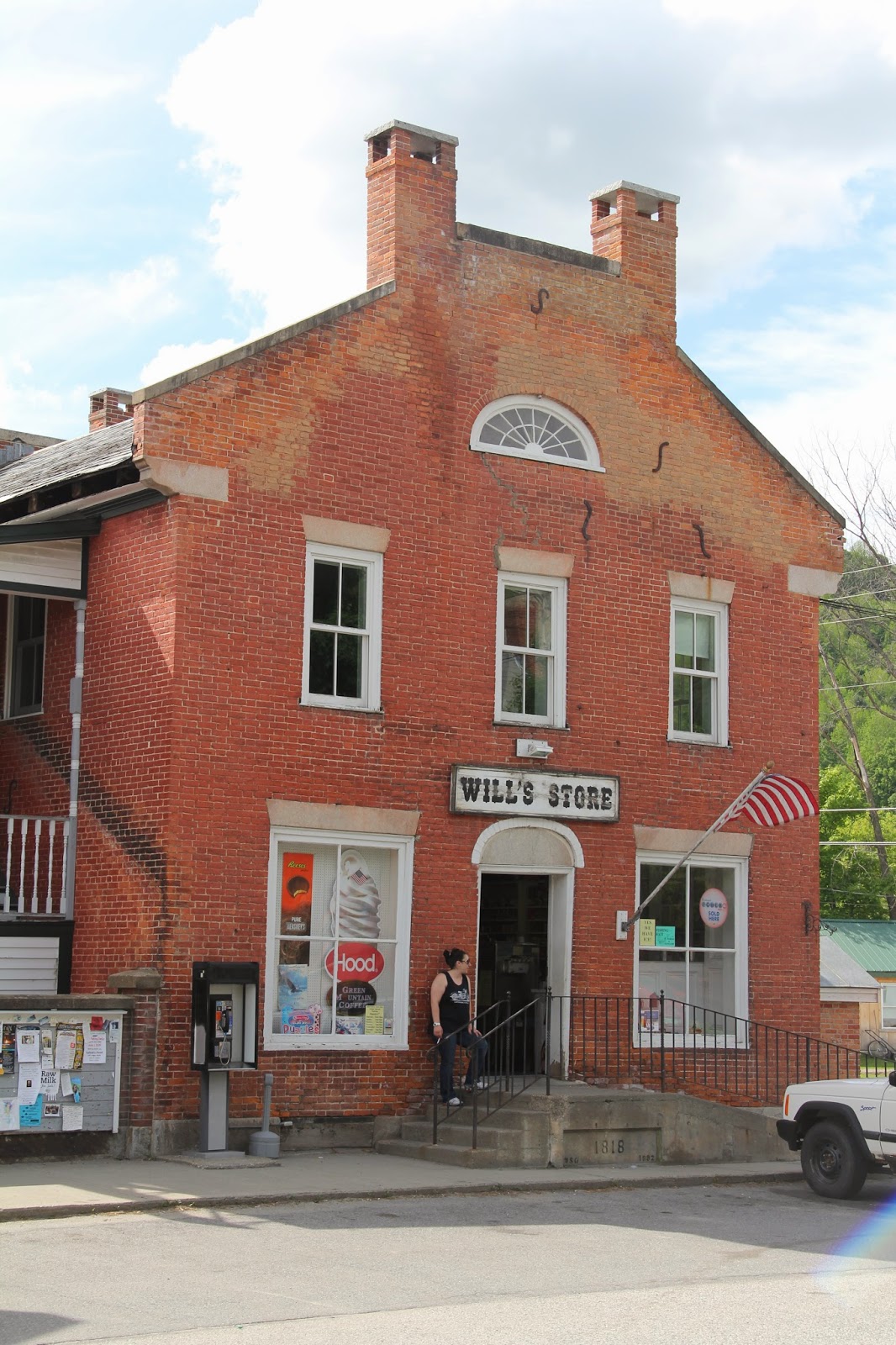 Further north we stopped in picturesque Chelsea for some refreshments at "Will's Store." 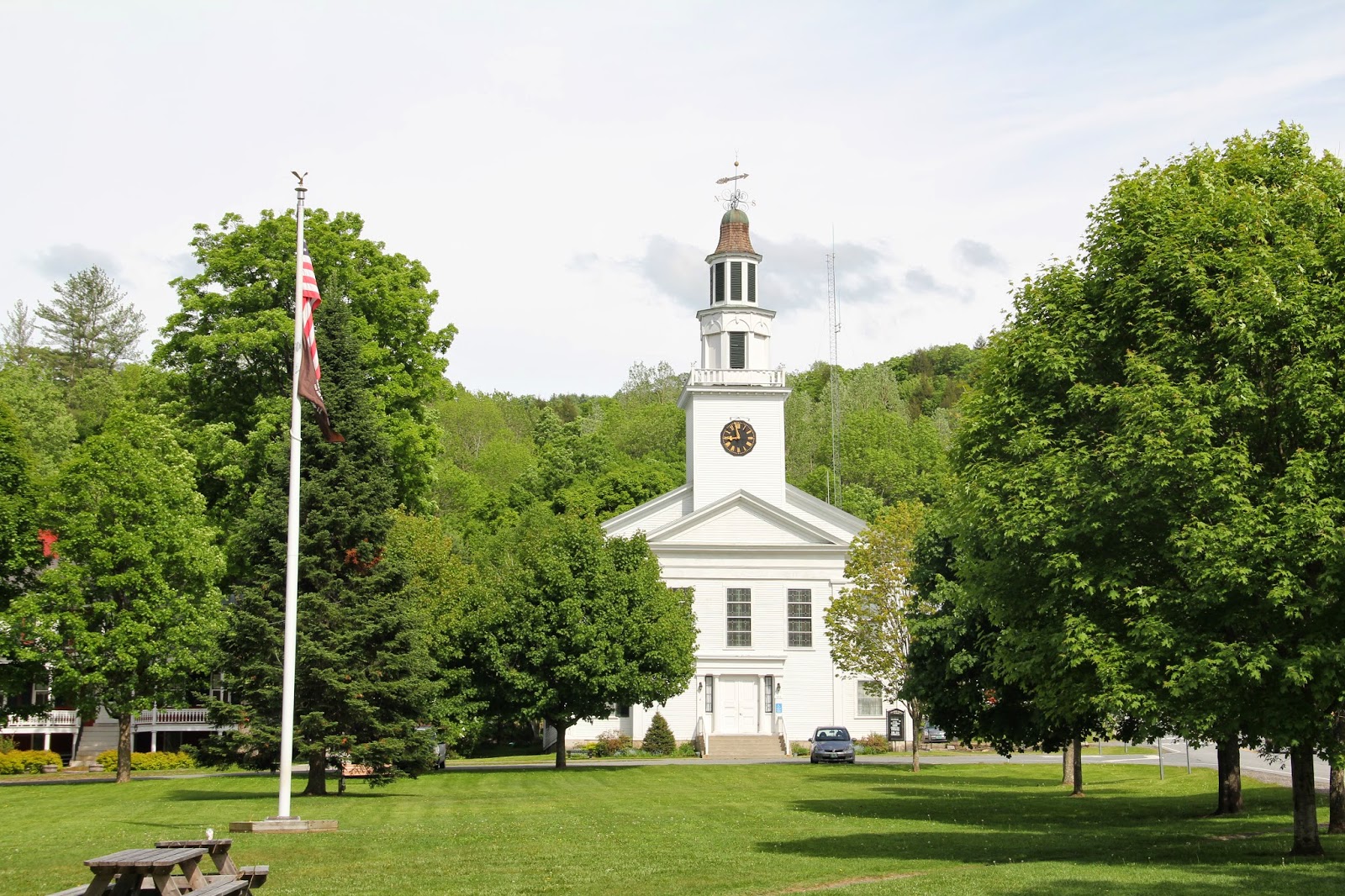 The village green and white church of Chelsea. 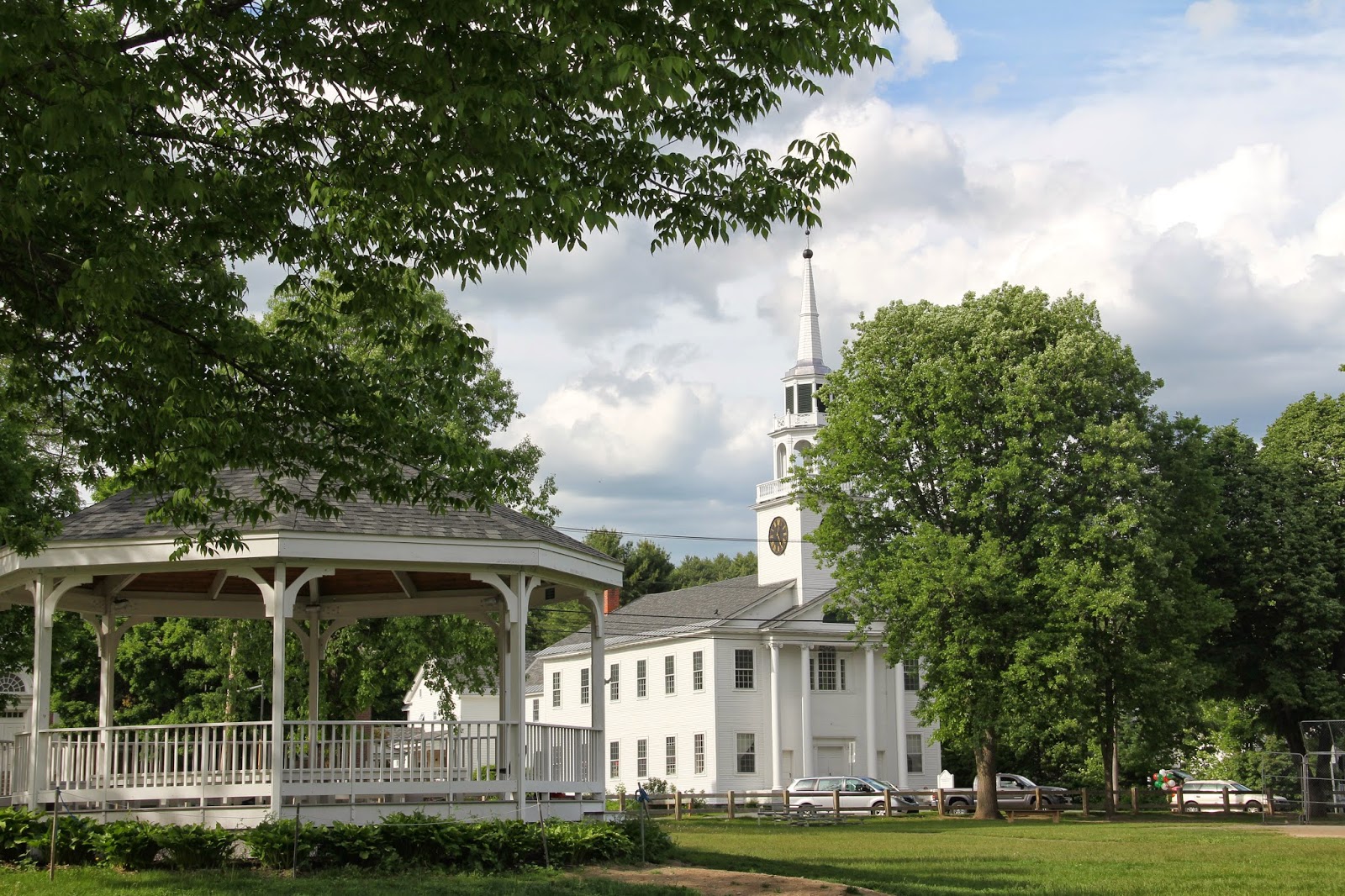 We then drove along winding road 113 through forest hills and white churched villages to Norwich, also with its church, green and gazebo. 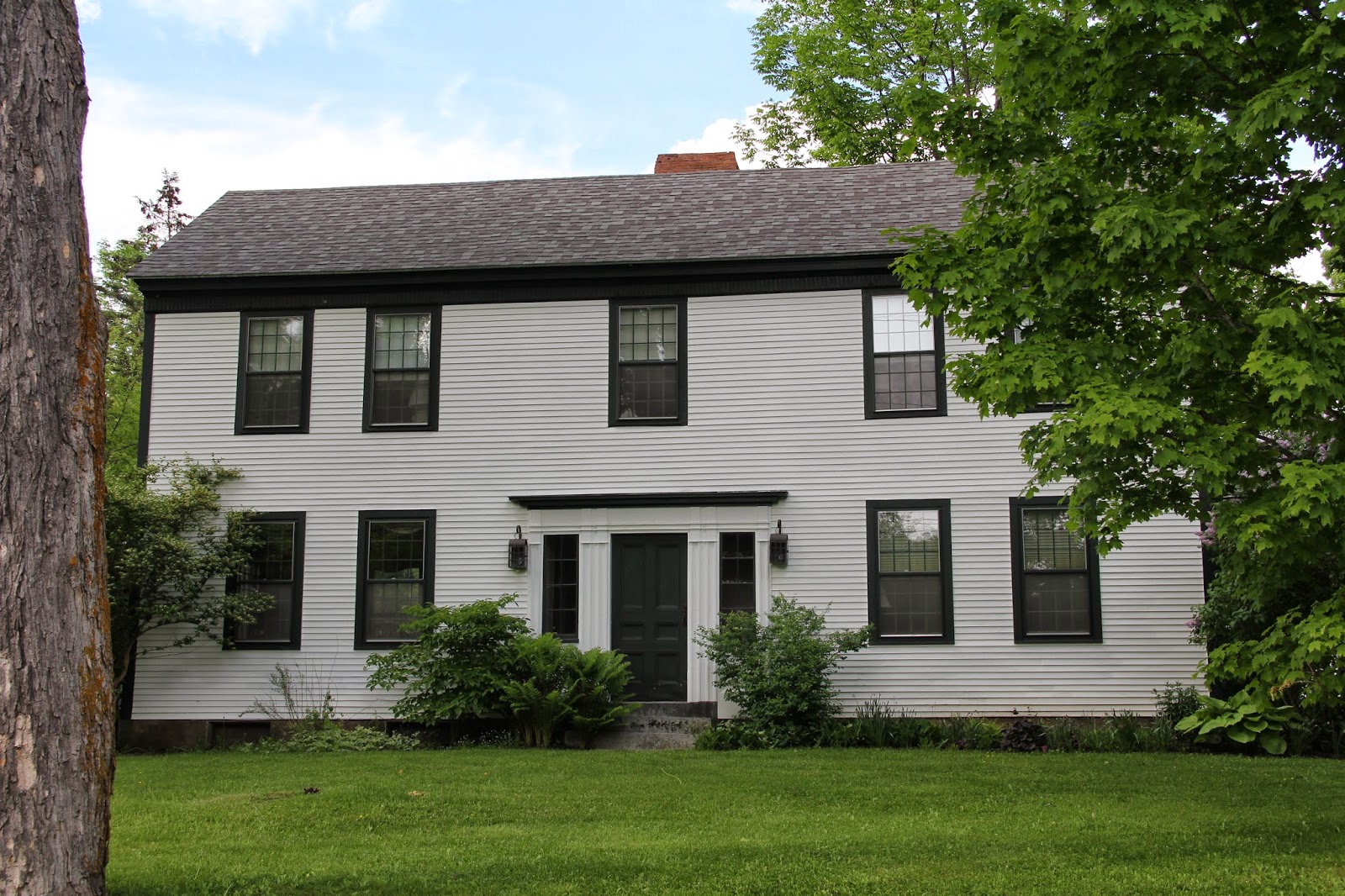 A few miles north of the town square, the Smith family rented a home (above) for their final three years in Vermont. 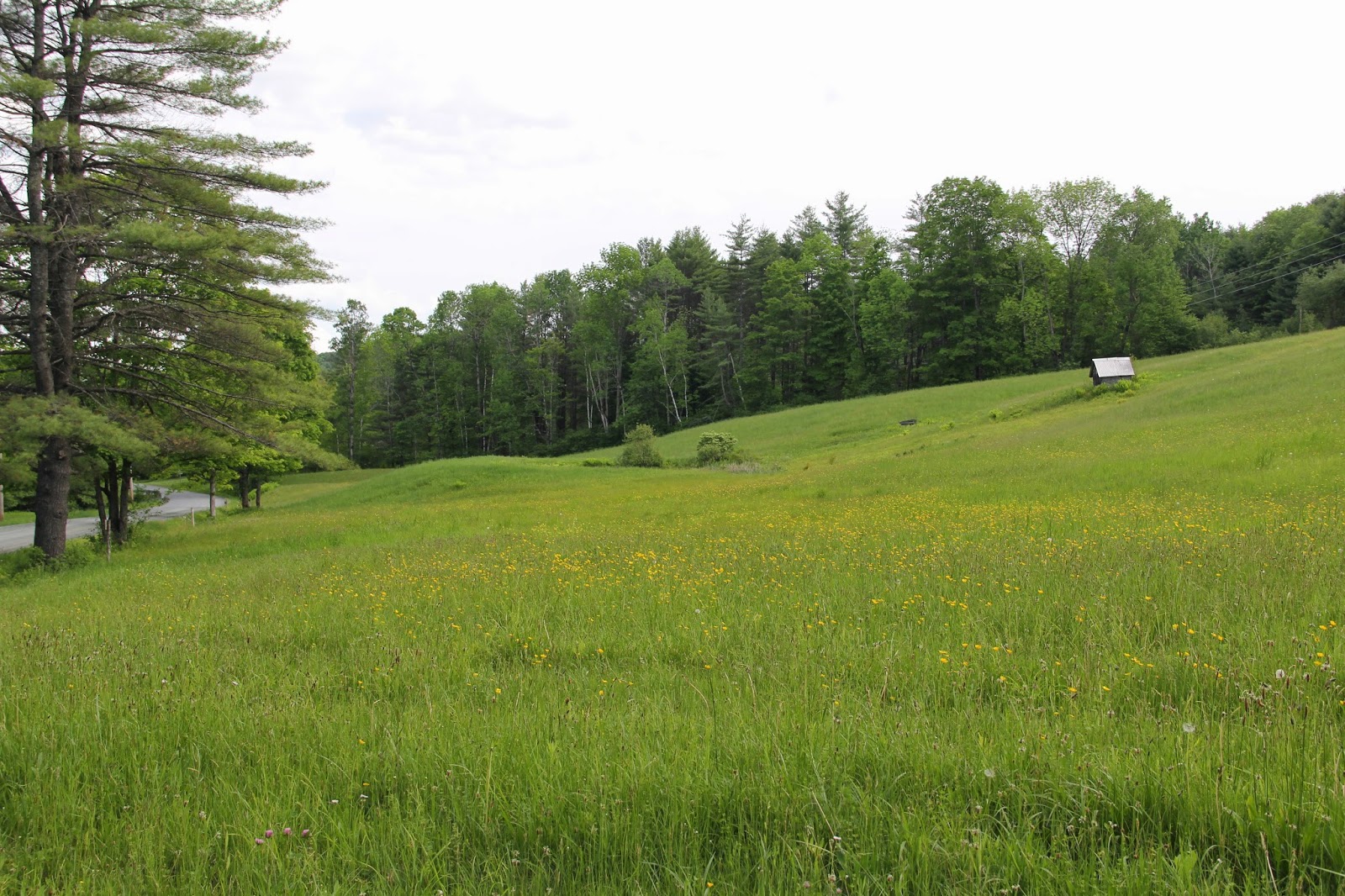 Pasture to the west of the home is probably part of the land the Smith family tried to farm for three years. 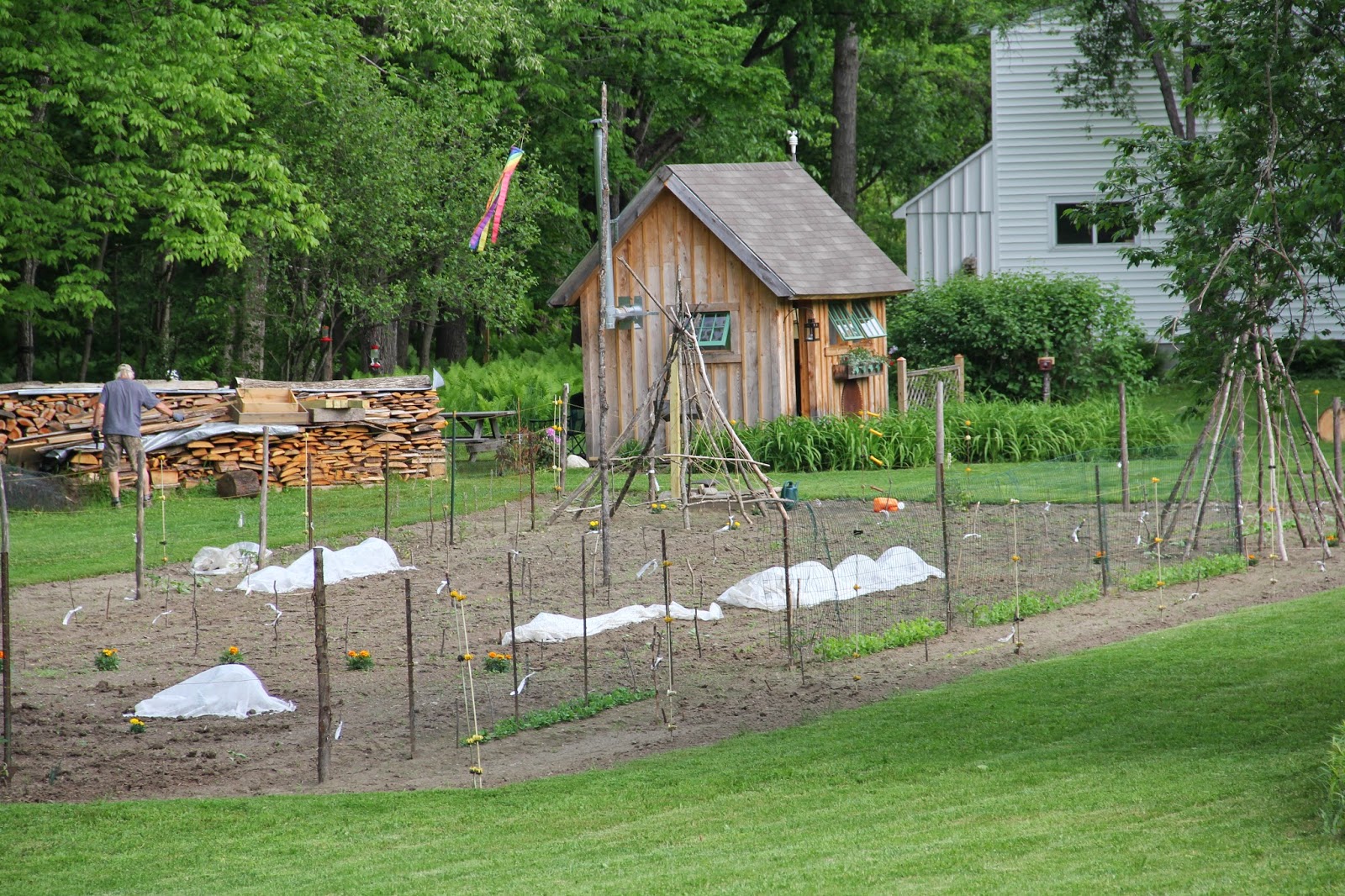 We kept looking for any signs of cultivation in Norwich and this was all we could find. Seems most Vermonters have given up trying to grow anything other than sugar maple trees and grass for cow grazing. On June 4th lilacs were just in bloom and this gardener is still covering temperamental plants. No one wonder the Smith family gave up on trying to make a living in late-growing- season Vermont.

The challenging life of Vermont farmers provides the setting for the first chapter of my book on the history of the Mormon Church in Indonesia. Here is what I hope will be the beginning of my book:


The island of Sumbawa lays three islands to the east of Java, beyond Bali and Lombok. It, like many of the other islands of the Indonesian archipelago, was formed through eons of volcanic eruptions as the power, pressure and heat of the Australian plate subducting under the Eurasian plate forced molten material up through the earth’s cracked curst. One of the most violent of these eruptions was the 1815 explosion of Sumbawa’s Mt. Tambora.
Tambora’s eruption is considered to be the second largest in history. It killed as many as 50,000 people, wiped out a whole language (Tambora) and left the island of Sumbawa uninhabitable for years. The force of its explosion sent a staggering 11 cubic miles of dust, ash and rock into the atmosphere! (By comparison, the famous1883 eruption of Krakatoa to the west of Java only ejected six cubic miles of mountain.) Prevailing winds then enveloped the earth with particulates that blocked out the warming rays of the sun and thus lowered the world’s temperature by an average of one degree Celsius. This “year without summer” brought agriculture calamity to Europe and North America.[1]
In his biography of Mormon Church founder Joseph Smith, Richard Bushmen has this to say about Tambora’s far reaching influence on the farmers of New England, including the Smith family of Vermont:
“In the next two years nature conspired to drive [the Smith Family] from Vermont. The second year on the Norwich farm, crops failed again. Joseph [Smith Sr.] planted the third spring, in 1816, with the resolve to try just once more. The result was conclusive. This was known as the year without a summer. Lucy [Smith] spoke of an ‘untimely frost.’ Actually on June 8 several inches of snow fell all across the highlands of northern New York and New England, and ice formed on the ponds. The entire summer was cold and dry. Famine compelled farmers to pay $3 a bushel for imported corn. As Lucy remembered it, ‘This was enough: my husband was now altogether decided upon going to New York.’”[2]
The Smith family was not alone. Over the next two years thousands of Vermonters migrated in search of literal greener pastures. For the Smith family the greener pasture was the town of Palmyra in western upstate New York. It was here, a few years later that a young Joseph Smith Jr. was directed by the angel Moroni to the Hill Cumorah to unearth golden plates that contained a record of ancient peoples and prophets who lived in the Americas. Joseph Smith translated the record and called it the Book of Mormon.
Had Tambora not erupted, there would not have been a year without summer, and without that cold, dry summer the Smith family may have stayed put in Vermont thus leaving Joseph far from Cumorah and its buried plates. Certainly other factors could have compelled the Smith family to migrate, but for some reason a volcano on an isolated island in the Dutch East Indies served as the catalyst to put a religiously inquisitive boy in the right place to receive the records and to begin a religious restoration.
[1] Winchester, Simon. Krakatoa. pp. 292, 307
[2] Bushman, Richard Lyman. Joseph Smith: Rough Stone Rolling p. 27

From Norwich, Vermont we drove across the adjacent Connecticut River to Hanover, New Hampshire, crowded with what looked like the tail end of graduation festivities at Ivy League Dartmouth. We then headed south eventually deciding to drive into Lowell Massachusetts--a classic industrial mill town situated along a power generating river--where we hoped to find a unique restaurant for dinner. We passed a few Cambodian restaurants, but unfortunately Wendy's won out.