While I was off with my students, Sarah was also participating in a Field Lab for her world theater and performance class taught by Adrienne Moore from USU. Sarah got to see how wooden marionettes are made and then she was taught how to use them and then finally they got to watch a performance of Burmese marionettes.

Meanwhile, Marie and the boys ventured into downtown Yangon where they went to the big People’s Park near Shwewdagon pagoda. Their report was that the guide book made it sound more exciting than it really was. The boys did enjoyed kicking a soccer ball around. They then got hamburgers for lunch at Harley’s. Will’s report is that the hamburgers would have been better with lettuce, but they had to abstain given the pre-port recommendations from the ship’s doctor (and common traveler’s sense) to avoid uncooked vegetables and unpeeled fruit. Marie dutifully requested no ice in the fountain drink, only to realize after Joel had already downed half of his that fountain drinks more likely than not are made with tap water. After lunch they returned to the ship and went swimming. 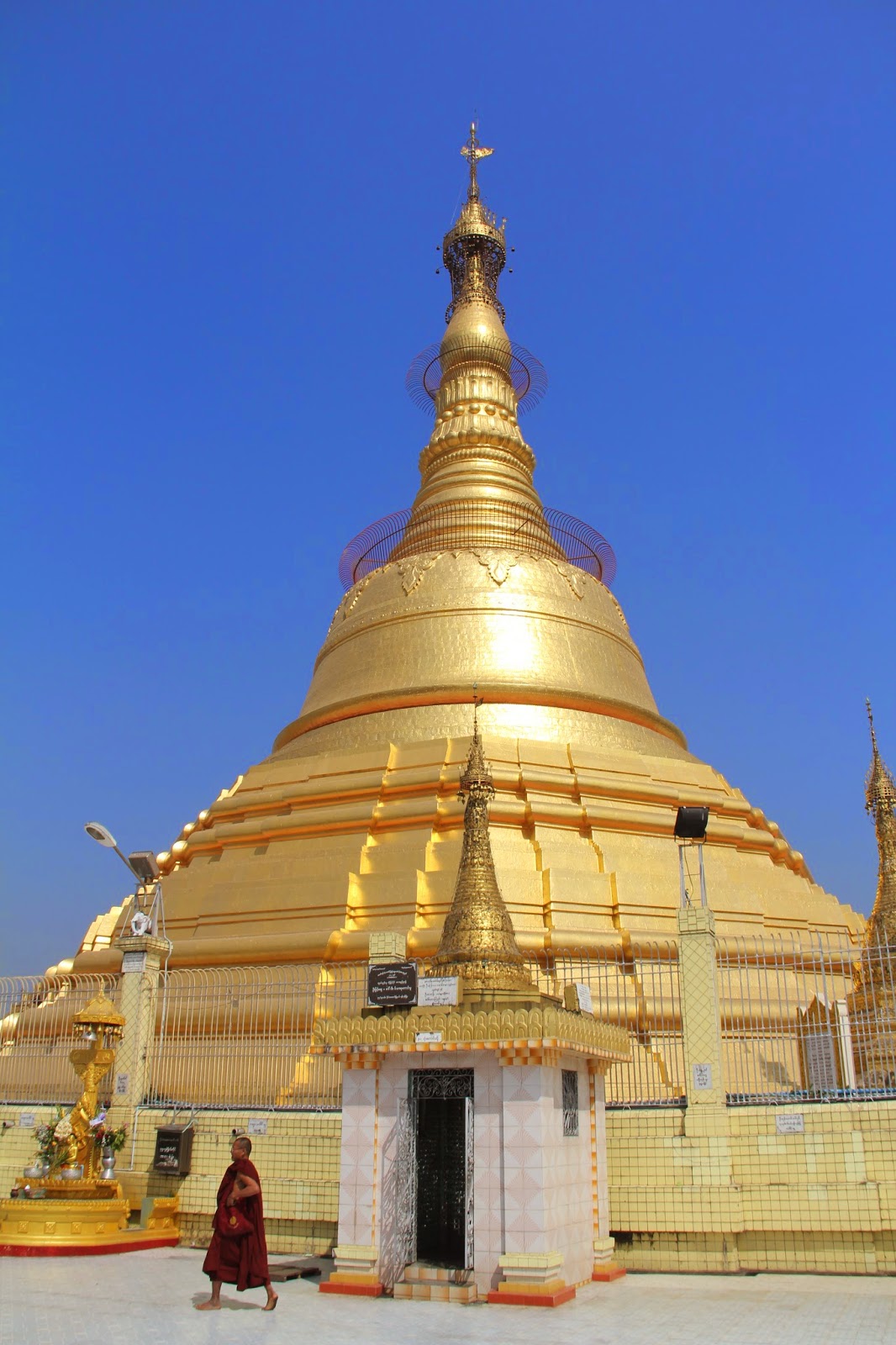 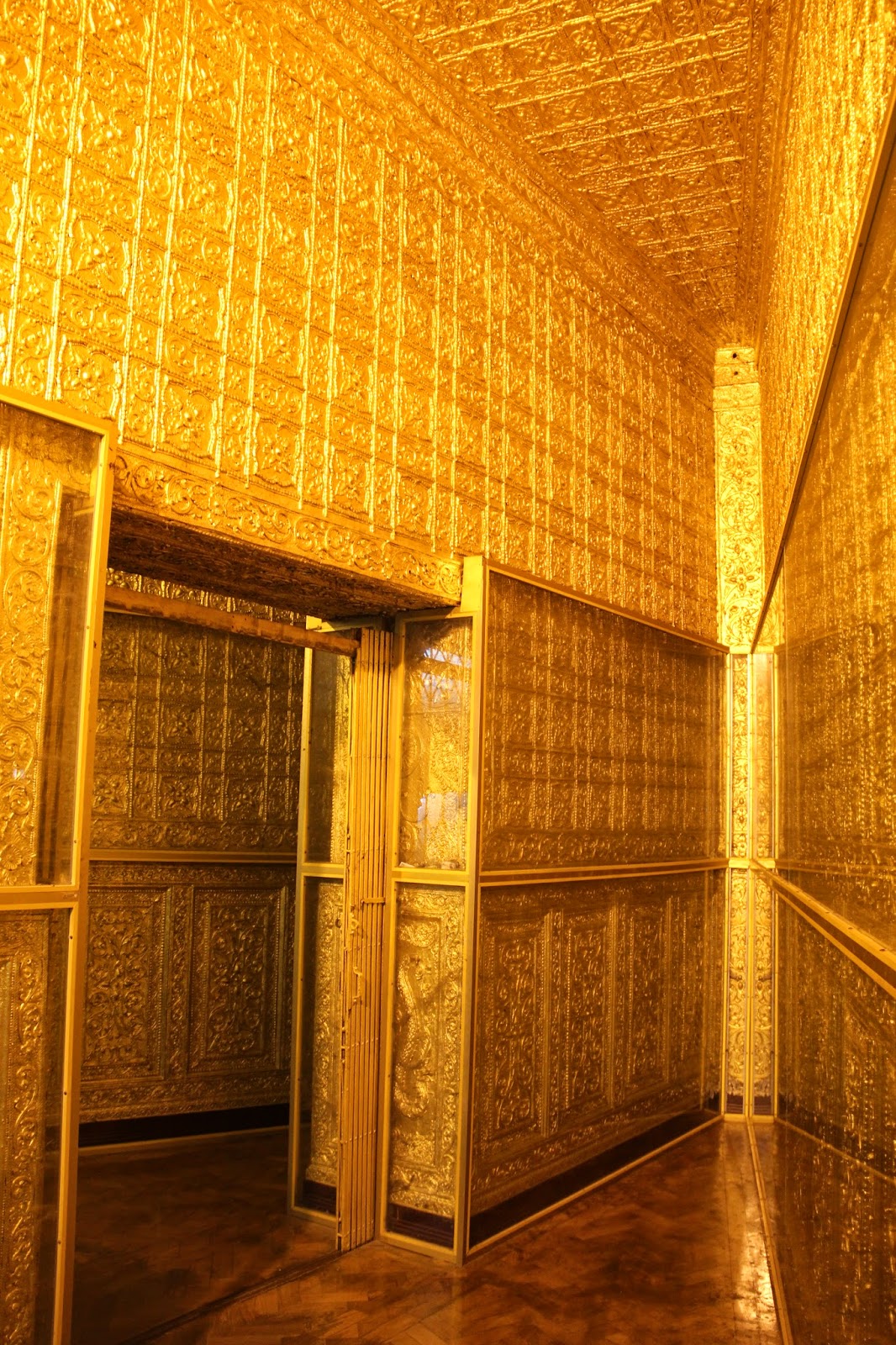 Next morning we all headed out to see more of the city. Our first stop was the river front Botataung Pagoda. It is unique in that it is not a solid mound (like most pagodas) but has a gold lined interior of pie-piece shaped chambers, one of which houses a shine which encases a hair of Buddha. While exploring Joel started to have stomach troubles (perhaps the result of yesterday’s Sprite). He attempted a bathroom break, but we were required to be barefooted while in the pagoda precinct which did not make using a smelly squat toilet very attractive. Once outside Joel had his first ever Coke (from a can)—which I have found has medicinal properties when confronting traveler’s diarrhea. We headed out walking, but before too long, Joel was in enough stomach pain that Marie and the boys decided to head back to the ship to take it easy. Luckily Joel’s stomach problems did not worsen and also lucky is the fact that all of us survived Myanmar and India without serious digestive problems. 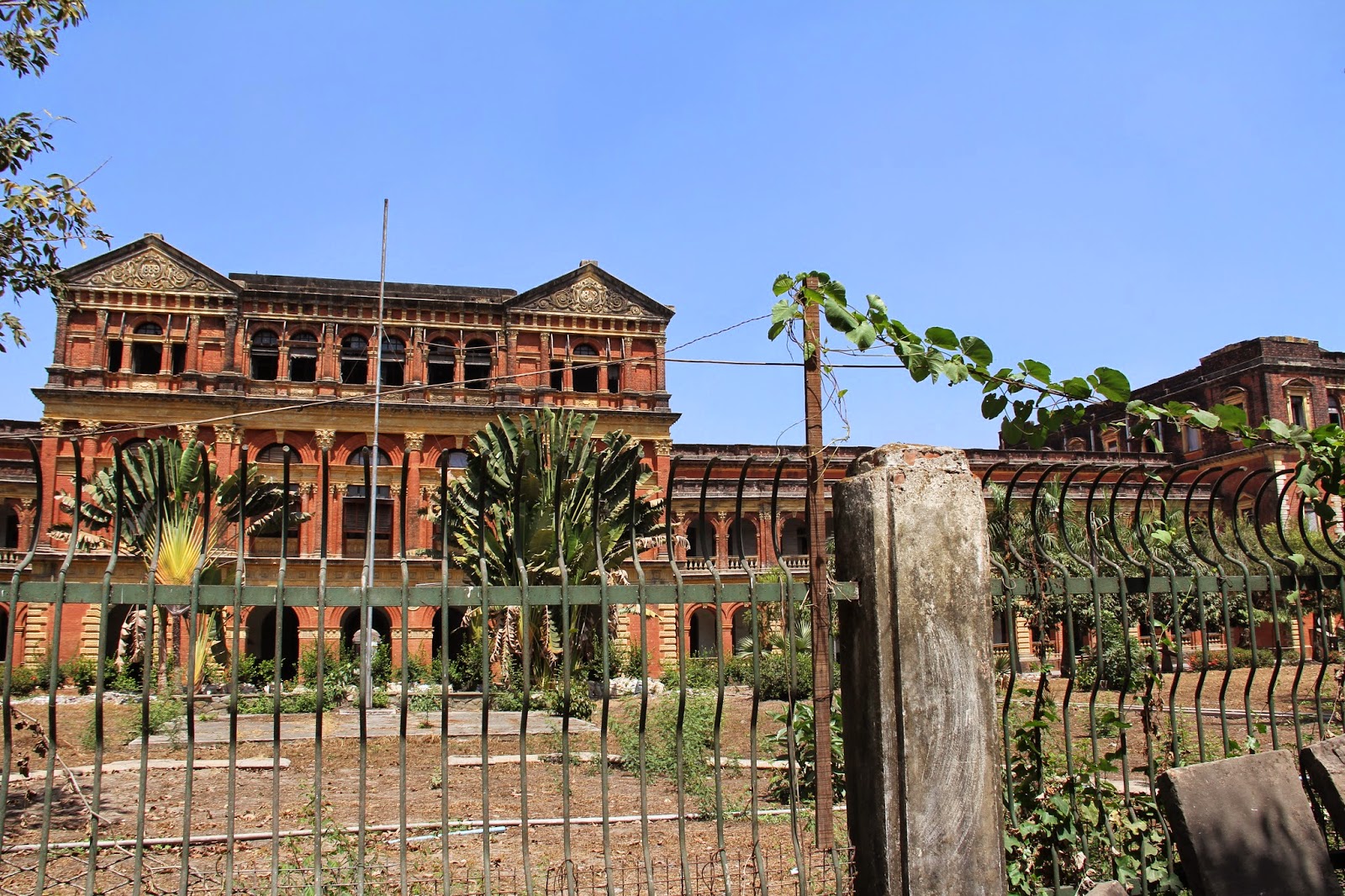 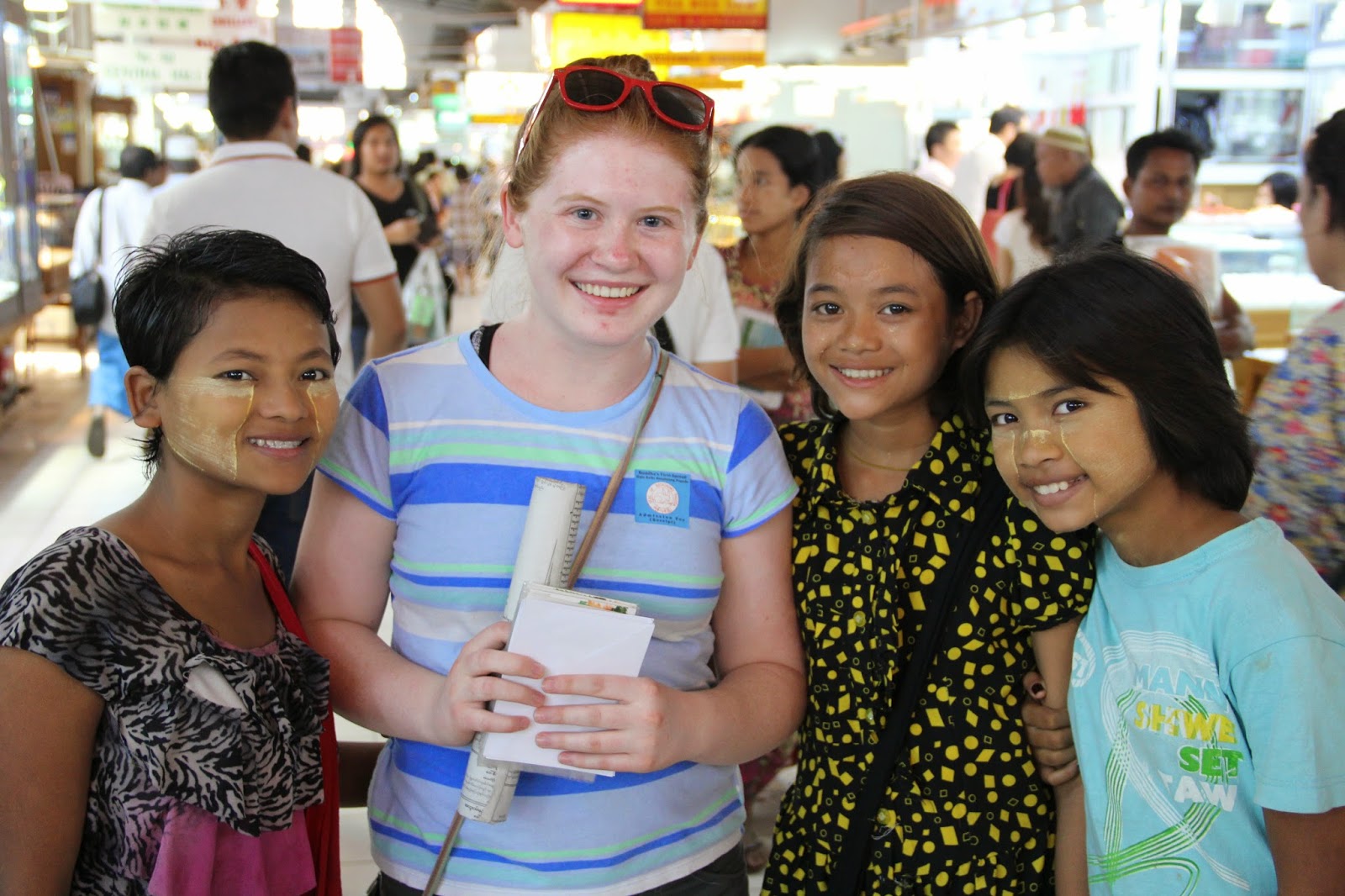 Sarah and I had a delightful time exploring. We checked out bookstores (she bought a copy of Animal Farm--since George Orwell lived in Burma), we admired British architecture (much of which is in serious decay and even abandonment), we bought a delicious pomelo which we peeled and ate (peeled yourself fruit is OK) in the peace and shade of a catholic church yard, we bought a newspaper, we had a delicious Thai lunch, and then we shopped at Bogyoke Aung San Market (aka Scott’s Market). We had success buying gifts for Sarah’s friends and a Burmese sarong for me. In the process we met a nice young girl (Dazingnau) who sold painted cards (for thank you notes). We told her we were interested in buying a nativity set--we explained that it was a Mary, Joseph and baby Jesus. She seemed to understand so she then escorted us to dozens of shops scattered throughout the market that sold carvings or religious paraphernalia. At each stop she become better at explaining what we wanted as we clarified our explanations. Eventually we found carvings of Madonna and Son, and of adult Jesus, but never a nativity. Thwarted in our quest I then offered her some cash for her help, but she refused. Sarah then decided that we needed to buy a 25 card set from her, which we did. There in the center aisle of the market we also ran into Moe from the monastery two days ago. He introduced us to one of his teachers, who straight way gave us a wood carved coaster. Later in another part of the market, while looking at jade bracelets, I mentioned nativities to the proprietor (who spoke English well). He seemed to understand what I was talking about. He said he did not know of any for sale, but said he is always looking for new items to sell and if I sent him a sample he would have his jade craftsmen make a jade nativity. That evening I sent him via e-mail a link to my Christmas nativity blog, and then added a few downloaded photos of simple nativities. When we saw him two days later he expressed thanks and said he would send me photos of the finished product. Who knows, we may have just introduced a new item to buy to the large Scott market.

Our final two stops in our walking tour were a Jewish Synagogue (similar is style, but larger than the one in Cochi) which was built in 1896 by migrant Jews from India and Baghdad and a Shia/Persian Mosque. One sign of hope during our walkings, were the many ditch upgrading projects in process. I imagine when the monsoon rains come that the newly, brick-lined ditches will help prevent flooding and will help wash away that which smells.