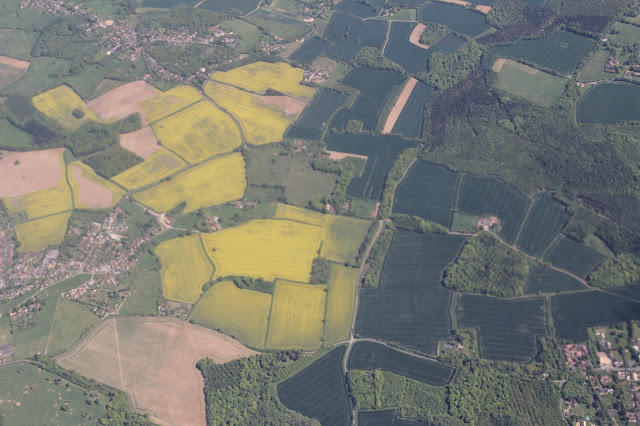 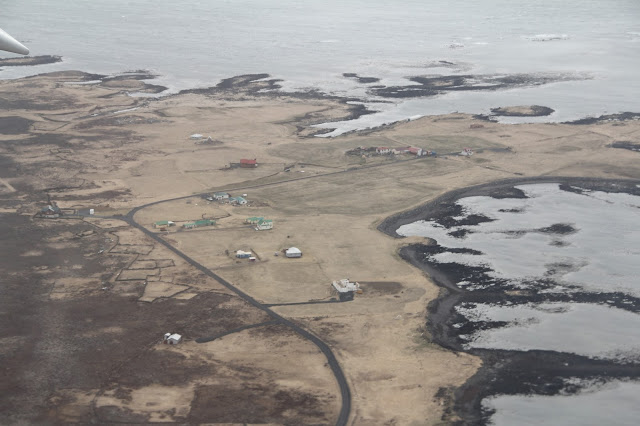 We have been back home from Semester at Sea for one month. My camera is almost vacant of any photo documentation of what has been going on. Here is a list and a few photos of what we have been up to.

Within days of being home, both Joel and Will had Utah Storm soccer tryouts. Will was happily welcomed back on to his team and Joel was able to move up to the A team, which made him happy. 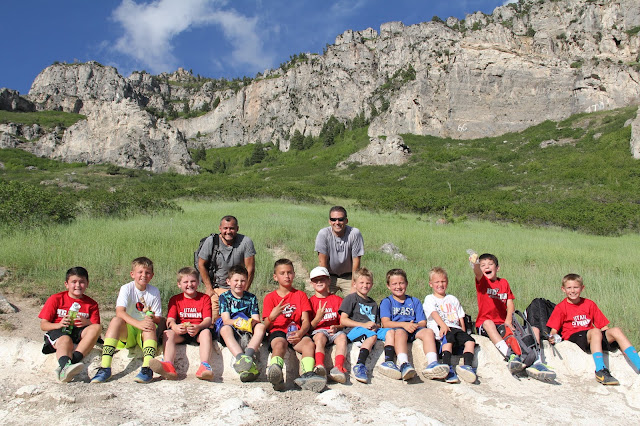 Will's soccer team and excellent coach Jim Henderson (right) on a post practice hike up to the top of the Y.

Will went back to fourth grade so he could hang out with friends. On the second to the last day he showed his class photos from every country we visited on SAS. As I was reviewing the photos with him, I thought I should make sure he knew something about each photo we chose. When the photo of Shwedagon Pagoda (he easily remembered that name when we were selecting photos) in Yangon popped up I asked if he knew what religion it was for. He quickly replied Buddhist in the tone of voice that said--"gee dad what do think I am stupid?"

Sarah and Joel went back to a few of their classes--drama and seminary for Sarah and band and math for Joel. Neither were re-enrolled so there was no pressure to do anything (not that much of any learning takes place the last two weeks of school). Joel was happy to be able to ride Frontrunner to Lagoon Amusement park with 10 of his friends for the 8th grade outing. He figured after navigating public transit in so many other countries that he could easily tackle it in the USA.

We went with Grandma and Grandpa Tueller and cousin Isaac to the Payson LDS Temple open house. Very beautiful inside and out. Lunch afterwards at Cracker Barrel (we knew the grandparents would like it). 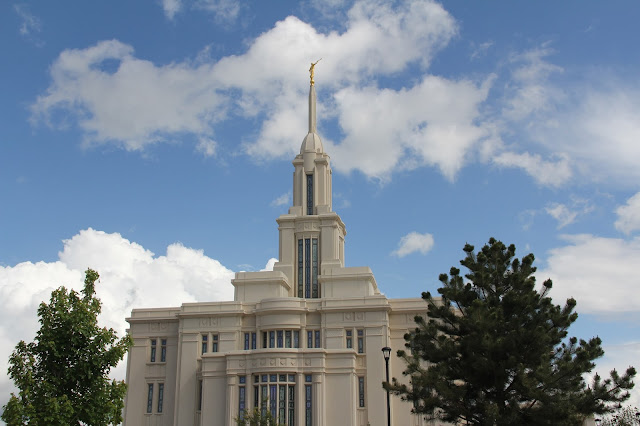 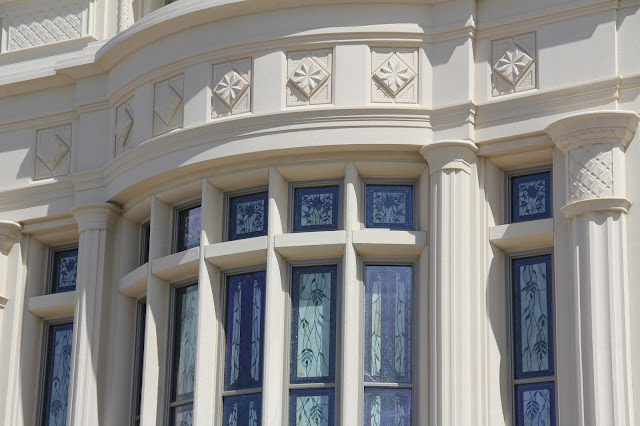 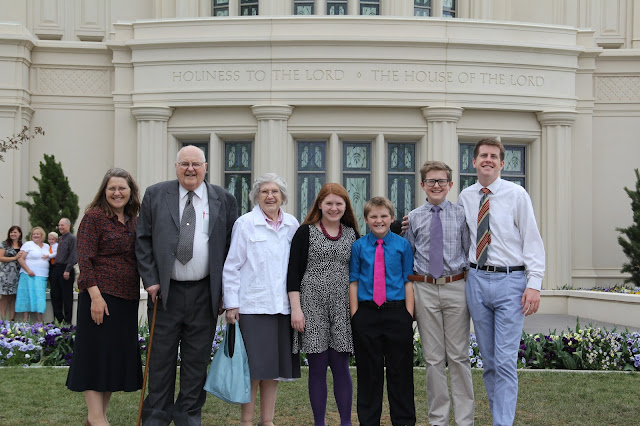 Will started up again with piano lessons. Joel started trombone lessons to get his embouchure and tonguing back in shape for band this fall. Sarah started cello lessons so after a year hiatus she will get back up to level to play in orchestra her senior year. Joel took two weeks of tennis lessons. Marie signed Will up for swimming lessons. Will went to Webelo Day camp. Joel and Sarah spent two days at This is the Place Monument for stake youth conference that included a mini pioneer handcart trek up and down a mountain.

Marie prepared our taxes and put the house back together. She also jumped right back in to being chief cook and laundress. We are all delighted to be eating some of our favorite meals again. Tonight it was crepes with strawberries, raspberries, whipped cream, yoghurt, chokecherry jam, lemon and powdered sugar for the filling options. It was the second day of Joel's braces so he opted for a strawberry yoghurt smoothie instead. On the evening before Joel got his braces we had a family photo shoot up Hobble Creek Canyon. It was about time, our last one was in 2009.

We all helped gather stuff from our home, set up, organize, and take down the massive two day yard sale sponsored  by the youth in the ward to help pay for their summer camps.

We welcomed Marie sister's dog Jaya into our home for two weeks--with Marie being the chief walker and taker-carer-of. 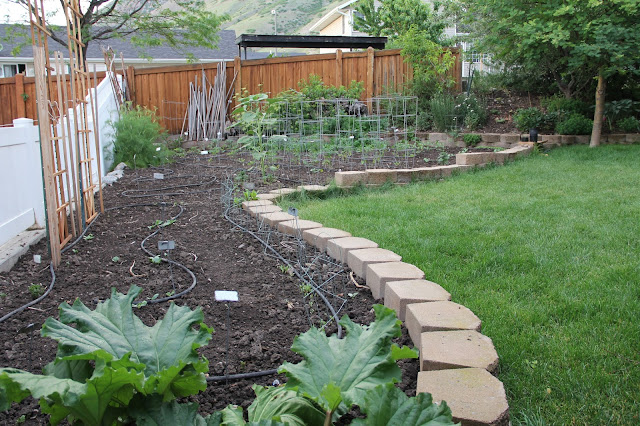 Marie and Sarah and then just Sarah made some delicious rhubarb crisps with rhubarb (bottom of photo) from our garden. So delicious. 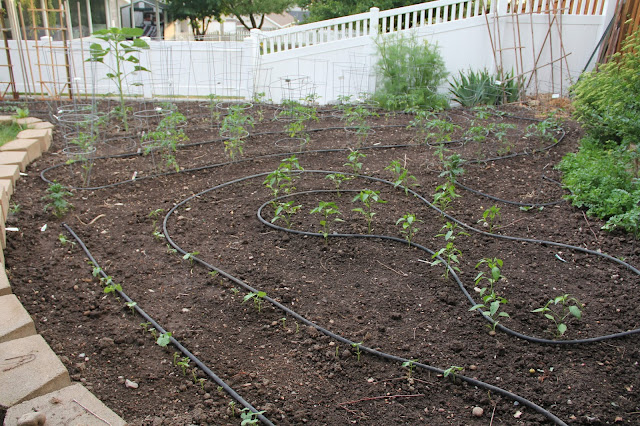 I planted the vegetable garden which took some time given the unusual two weeks of rain we had when we returned. The soil finally dried out enough for me to turn it over with my digging fork and to then plant. Most all of the seeds have now sprouted. I also made one initial weeding of all of the flower beds. Morning glory (aka bindweed) is still my nemesis. 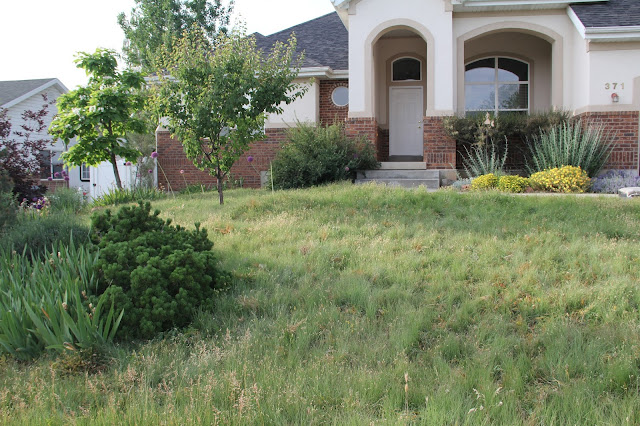 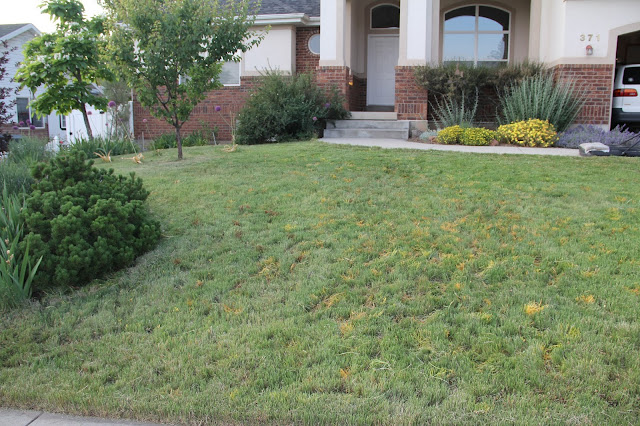 After mowing and after most of the sprayed morning glory that had infested the lawn had happily died. 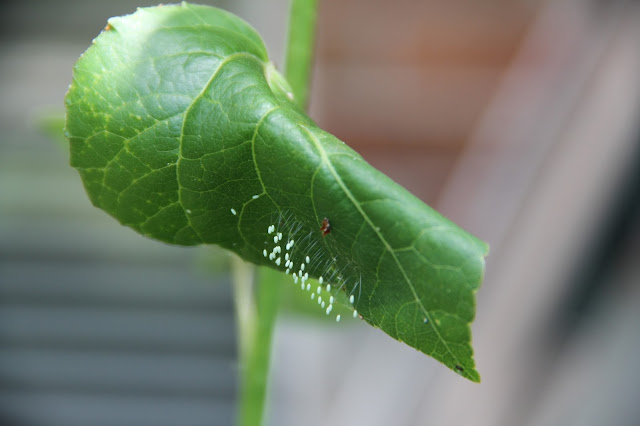 Lacewing eggs on an aspen leaf. It's a good thing, The lacewing larvae are voracious eaters of aphids which are all over the young aspen tree.

Three days after returning I drove up to Logan to meet with my five siblings to divide up the homestead. It was a happy, full of good memories day and a sad, this is the end of creating memories in such a wonderful home day. Before dividing, everyone got to retrieve any thing they had gifted to our parents (I came home with lots of Hebron blue vases, Bethlehem olive wood, and Indonesian batik table cloths) and we sorted some things like Christmas ornaments, china and pottery plate sets, books, into six equal (sort of) piles to be randomly divided. Per our parents' wish, we then drew lots and took turns choosing items. We went 1 to 6 then backward 6 to 1. My first choice at number 4 was the player piano (don't know where we will put it) my second choice was an antique wooden chair that was in Brigham Young's box at Social Hall. After thirty rounds we ran out of energy and items. Happily it was a very pleasant evening full of laughing and memories and people saying "good choice" or "oh that would have been my next pick". Nobody got everything they wanted, but everyone got nice things they did want for themselves and for their children and grandchildren.

Two weeks later on the Saturday before Memorial Day we had a large family gathering. I cooked Emmett curry and rice for everyone. With feedback from spouses and children we then had a second go around of drawing. It was more hectic this time around but once again it was a happy time as everyone seemed to find something that they would like as a keepsake. Will found a bust of Abraham Lincoln, a balalaika from my parents trip to Russia and a pen set given to his grandpa in thanks for his service as bishop, Sarah some old dresses, hats and necklaces (from her great grandmas), Joel a wooden Pool Parlour sign that hung in the pool room and included the notice no minors, no swearing, no gambling. We brought some of the stuff back in our luggage carrier and then I drove to Logan for a third time a week later. This time some of us worked on cleaning out more stuff. I filled up our van with more things to bring back. It has taken some time to get everything stored or displayed in our home. 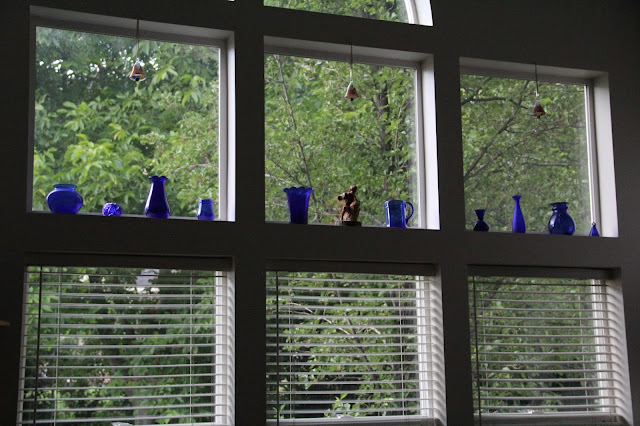 Mom loved cobalt blue so I often gifted her Hebron blue vases. Many of them and other items from her collection now grace our window sills. 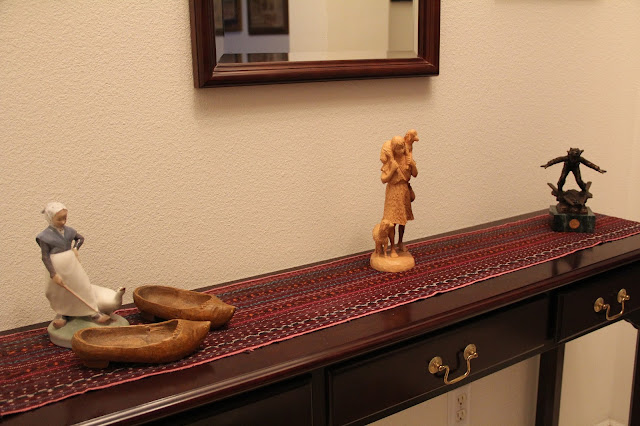 New entry way decor. As two of my choices I selected the wooden shoes that my grandpa Fife bought in France during WWI--he then had his army mates sign the bottoms of the shoes--many of the dozens of names are still visible. Mom always paired the shoes with the Royal Copenhagen goose girl wearing wooden shoes. The commemorative bronze statue of a girl snow-plowing was a joint Christmas gift to our parents from all six kids during the Salt Lake Olympic year. It was carved and cast by the father (Dennis Smith) of Marie's niece's husband. The George Lama olive wood carving of a shepherd carrying a lamb, was purchased by my parents when they came to visit me in Nazareth. Since I took them to this renowned wood carver, I was able to claim this carving before the dividing of items.

I started back to writing my book on the history of the LDS Church in Indonesia. Currently I plan to title it: Mormons in Indonesia.

Today we all went up to the Huntsman Cancer Institute in Salt Lake City for a new round of genetic testing. Last December I was tested for the familial melanoma gene mutation (negative) and Sarah for the SDHB genetic mutation that leads to paraganglioma (positive). We found out Sarah's results by e-mail in the middle of the Pacific. Today we all had blood drawn so we also can be tested for the SDHB gene. Sarah's blood draw was in preparation for an upcoming MRI and to see how she is doing two years after her surgery. It is more likely than not that Marie is the carrier (since her brother has had paraganglioma). If she or the boys turn up positive then they too will be scheduled for MRIs this summer to see if if there are any paraganglioma tumors growing. We are lucky to have Huntsman Cancer Institute so close and to be a part of their growing family genetic studies. 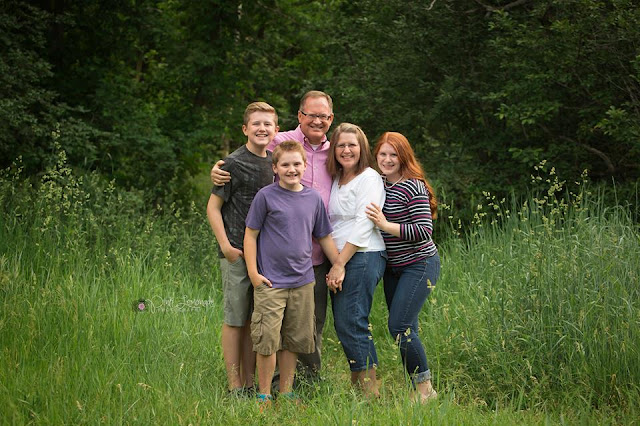