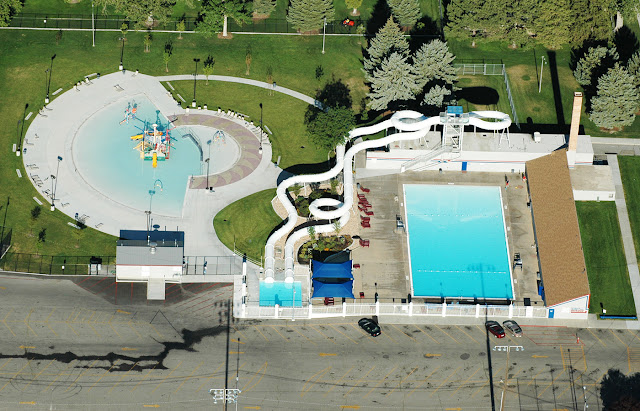 Last week my 10 year old son was enjoying a day of water fun with a friend at the delightful Provo City Rec Center (I hope Springville voters approve a similar facility for our town in this fall's election). As the two of them sat down to get ready to descend one of the long slides in tandem (something many kids like to do) a boy about their age and standing behind them in line made this comment: "That is so f---n gay." What? Since when is it "gay" for two boys to go down a slide together. For the rest of the day Will and this friend no longer descended the slide together. I bet they never will again. All because of some hateful, ignorant statement by another boy.

Where did the boy learn to profane anything he thought was "gay." My guess is he learned much of it at home or from friends who learned it at home. From parents and siblings (and the media) who think it is funny and cool to poke fun at or put down people they think are gay or people who have a different gender, skin color, religion or nationality.

The problem with this crazy world is that there are too many parents and then siblings, friends, associates, colleagues or leaders who spill forth hatred in the form of first jokes and snide remarks, then profanity and graffiti and finally arson and guns. It saddens me.

This week, it saddens me that Israeli young men from a West Bank settlement would spray paint anti-Christian comments and then set fire to the lovely Catholic Church at Tabgha commemorating the miracle of the multiplication of the loaves and fishes. Many other mosques and churches in the Holy Land have similarity been tagged with anti-Muslim or anti-Christian graffiti or set afire by Israeli settlers. 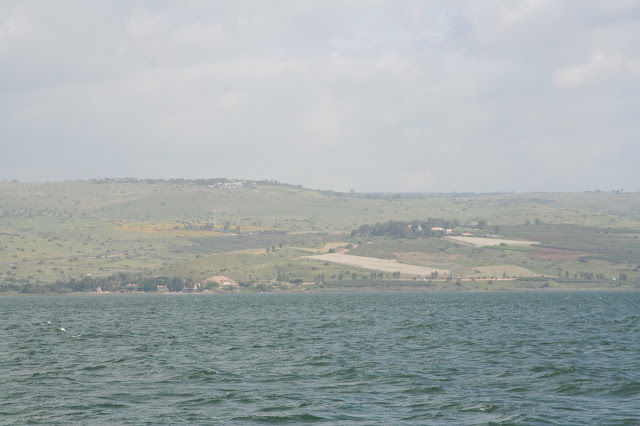 Church of the Multiplication behind the trees along the shore (left) and the Mount of the Beatitudes (trees center right) from the Sea of Galilee. 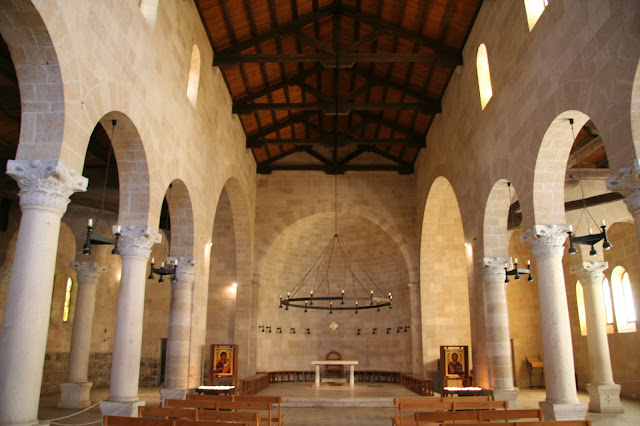 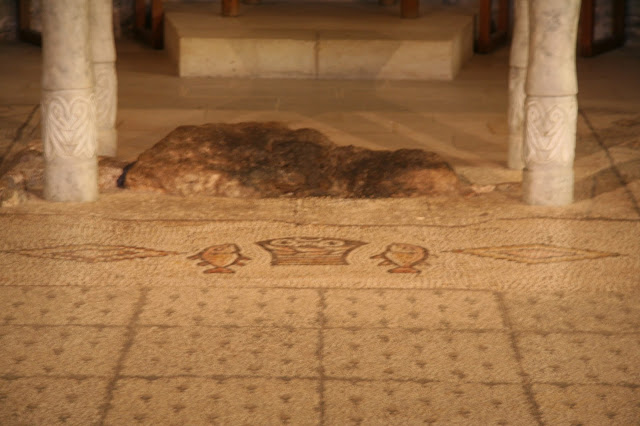 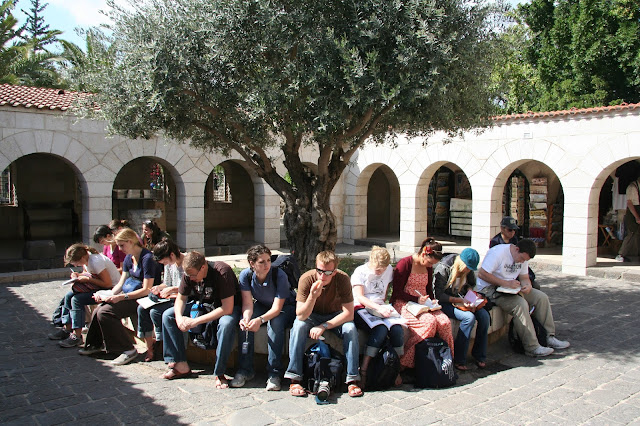 The actual church with its beautiful Byzantine mosaic was spared. Most of the damage was to the gift shop (on the right) facing the entry courtyard

It saddens and maddens me that a white American young man goes into a AME Church masquerading as being interested in studying the Bible and then takes out a gun and kills nine black Americans. 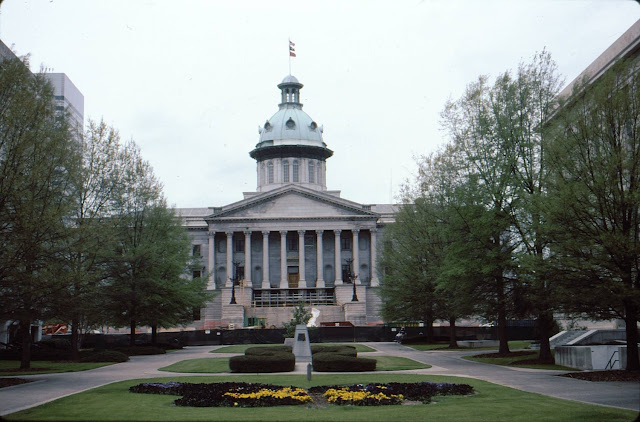 A photo I took a few years back of the South Carolina State House in Columbia flying three flags: country, state and confederate battle flag. The confederate flag, which to many is seen as a symbol of slavery and racism, has since been removed to a confederate monument on the state house grounds. That people still fly this flag as a symbol of racial supremacy speaks as to why there are killings like the one in Charleston. 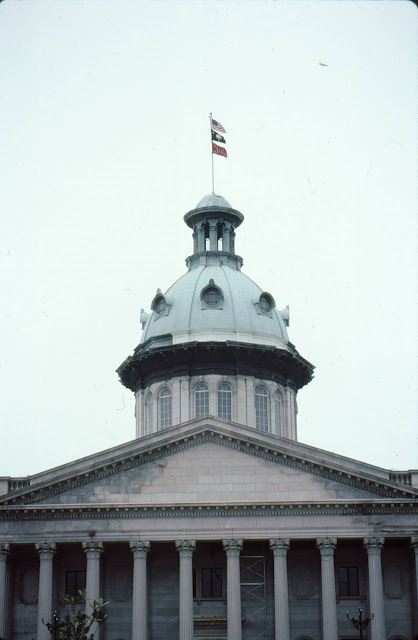 It saddens me that acts like this are dismissed as being perpetrated by the periphery or fringe while similar acts by other individuals from other groups are used to castigated entire religions or nationalities.

It saddens me that some gun advocates are now saying the solution to such atrocities is for all people in churches to carry guns. Has it come to this; to feel safe in America we all have to carry a  weapon to worship? 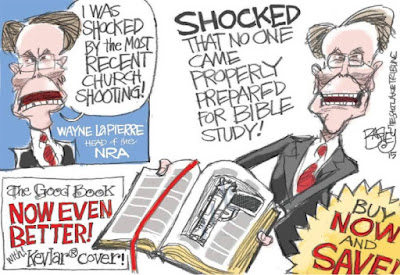 It saddens me that somehow we are not teaching our children to love, to accept, to do good, to seek justice, and to stand up for what is right.

It saddens me that on a slide in Provo, a Church on the shore of the Sea of Galilee and a church in the heart of Charleston there is hate. And it saddens me that our reactions to such events are filled with excuses, stupidity, and inaction. 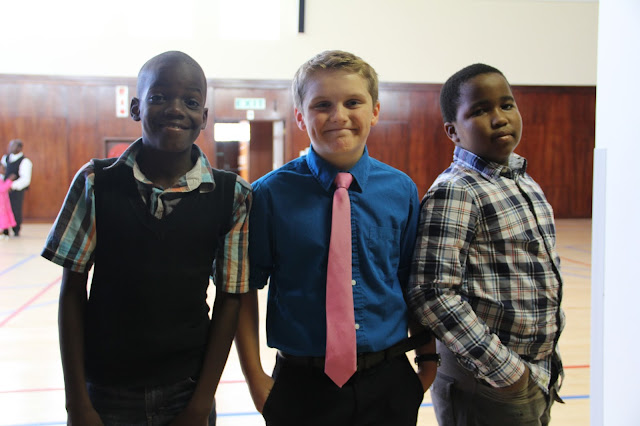 Cape Town, South Africa
Posted by chad at 11:34 AM