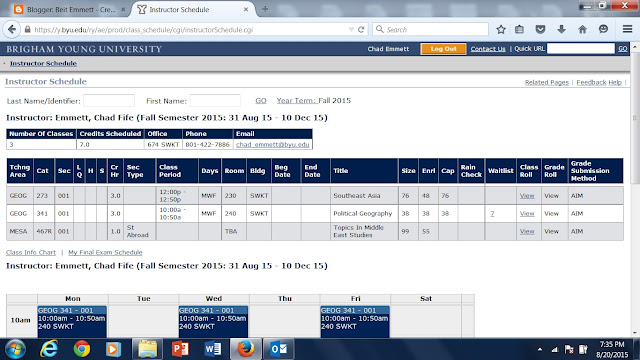 Two weeks ago I was informed by the powers that be at BYU that I was not permitted to teach an aleady scheduled, two week, one credit course on the Israel/Palestine conflict to the 55 Middle East Studies/Arabic (MESA) intensive Arabic students at the BYU Jerusalem Center (JC) in December. The news came as a very discouraging blow and just at a point in time when it seemed that 15 years of various BYU travel bans on my areas of research (Middle East and Indonesia) were finally coming to an end. This most recent ban had nothing to do with travel security.

One of my main motivations in getting a PhD in Middle East Geography was in the hopes that one day I would be able to be to teach at the BYU Jerusalem Center. I had participated in the BYU Jerusalem Study Abroad program in the fall of 1982 where I conducted research (with the encouragement of BYU to show that the planned BYU Jerusalem Center could be a place of academic research and not just Biblical Studies) for my masters thesis about the changing attitudes of the students towards Arabs and Israelis. I loved that experience and thought that going back as a teacher would be a great opportunity. When I was offered a job at BYU in 1992 I inquired if I, as a Middle East geographer, would be able to teach at the center, I was bluntly told no by Jim Kearl, an economics professor who was just a few years into his long tenure as Assistant to the University President for the Jerusalem Center. I thought I'd give it a try anyhow. It took a lot of patience, preparation (I regularly taught Old and New Testament classes at BYU for 5 years) and good luck (kind faculty in the department of religion who went to bat for me and a window year where older religion faculty could not or would not go and younger faculty did not have tenure yet) to finally have it happen. 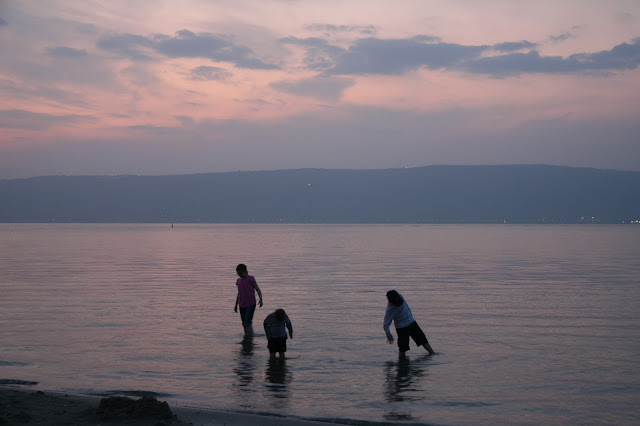 My experience of teaching Old and New Testament to three semesters of students during the 2009-2010 academic year was delightful. At the beginning of that year a seasoned JC colleague told two of us newbies that the best thing to do if we had suggestions for change was to just mind our own business and not say anything. On occasion that was a hard thing for me to do. I loved the center and wanted to help in making its programs the very best. That November when we arrived at the Sea of Galilee we were told that we could not go swimming! We could wade in up to our ankles! It was the off season and no life guards were on duty. I had promised my children that we would get to swim. I inquired of the resort staff and they said we could swim at our own risk, but that would be breaking one of the many BYU rules. I asked if we could arrange for a life guard and that was turned down. Later in a rare moment where we were asked for input, I brought up the crazy no swim rule. They listened! Next semester the students were able to swim for a few hours with student life guards and faculty supervision. The next year BYU even arranged to have life guards hired for the fall and winter programs when life guards were not normally on duty. Another suggestion by Marie about not counting driving mileage for to-and-from travel to the kids' school was also implemented.

I worked extra hard at keeping all of the rules and not rocking the boat. As a family we obtained multiple levels of approval to go to Bethlehem on Christmas Eve. I refrained from not going in to the old city at restricted times and in restricted areas. I even turned down an opportunity for a first time visit to Mar Saba Monastery in the restricted West Bank. We also made sure none of us walked barefoot on the marble floors of the center.

One challenge to the rules I made was when, after being asked by several students, I did write explanatory letters to the Honor Code Office. These students had already been punished for infractions (sneaking into a hotel and going swimming and going into the Christian quarter after sunset) while in Jerusalem and were now being punished a second time by being put on probation (which then impacted two students applications for medical school) once they returned to school in Provo.

When an opportunity for another sabbatical came up I inquired about the possibility of returning to the JC to teach again. I was told that it could possibly happen (which I interpret as meaning I was not that troublesome during my teaching year) but given my unique situation as a non-religion faulty member and a non-ancient Middle East historian, it was not going to be easy. Plus now there were many more young tenured religion faculty in line to go. I gave up hope on Jerusalem and applied for Semester at Sea instead.

Last year I was approached to see if I would be interested in joining a rotation with two other MESA faculty in teaching the intensive Arabic students in Jerusalem (after a semester of study in Amman). I happily agreed. This meant that every three years beginning in 2015 I would get to spend two weeks in December traveling around the Holy Land (including a one week stay at the JC) lecturing and arranging lectures for the students. This first time around the two other faculty would come each for a week to show me the ropes.

During our year in Jerusalem, BYU faculty were allowed on certain occasions to meet with the few Arab members of the Church living in the West Bank (because of the Wall they could not attend services in Jerusalem). Our family loved attending Sunday gatherings in Bethlehem. Friendships established during that year have remained. As these friendships have continued over the years I have become acutely aware through phone calls and blog posts of how difficult it is to be a Latter-day Saint in the West Bank and how policies (for example faculty can no longer attend the Sunday meetings in Bethlehem--just one service couple can go) put in place by the JC in the last few years have added to that difficulty. Efforts by these local members to bring attention to these challenges were for naught. Finally last August I decided to write a couple of respectful letters, first to Jim Kearl and then when he didn't respond to Elder Holland (who Jim Kearl reports to) suggesting how JC policies might be altered in order to better serve the needs of some of these members. Finally in response to my letter to Elder Holland (I don't know if he actually read the letter, maybe his secretary just sent it back down the ladder), I got a letter from Jim Kearl who was asked to respond, explaining why certain rules were now in place. I felt compelled to reply. The harshest, most condemning thing I wrote was a quote from Elder Neal A. Maxwell which said:

“Rules are useful, but these must merely mark where the borders of conscience end. Rules have a way of pushing conscience back, and yet further back. Besides, each human and each human situation are sufficiently different that rules thus multiplied become like the unpruned tree. A lively conscience can cut through to the justice of any situation” (Of One Heart p. 24).

That was it. I wrote some letters suggesting ways to better serve the members in Bethlehem. Then I was done.

Last month I submitted my Jerusalem travel application for approval.  I thought it was just a formality given the fact that the MESA program had already scheduled me for the course. It came as a complete shock when I was informed by International VP Sandra Rogers that I could not go (the other two MESA faculty got approval). No reason was given. A follow up letter today told me it was because I was "seen as someone who would be disruptive at the center because of [my] previous disagreements with center leadership/personnel." I petitioned the action to VP Rogers and President Worthen, but they stood by Kearl's ban. Sadly I am not the only casualty; several other BYU faculty who have also taught at the JC have been blacklisted for questioning rules or seeking to make improvements and changes for the better at the Jerusalem Center.

And there you have it. The take-away for me: Don't speak up, don't suggest, don't stand up for the little guy, and obey the rules at all costs. As one BYU colleague recently said about his chosen survival tactic: "Just keep your head down."

If what I have said (in letters to administrators who have stewardship over the Center) has ruffled some feathers then OK don't invite me back to be a faculty member at the Jerusalem Center, but why forbid me from teaching a MESA course in a BYU building for one week in December? I'll happily sleep and eat elsewhere.

I am very sad about this ban, but I am not sad that I tried to be an agent for positive change. 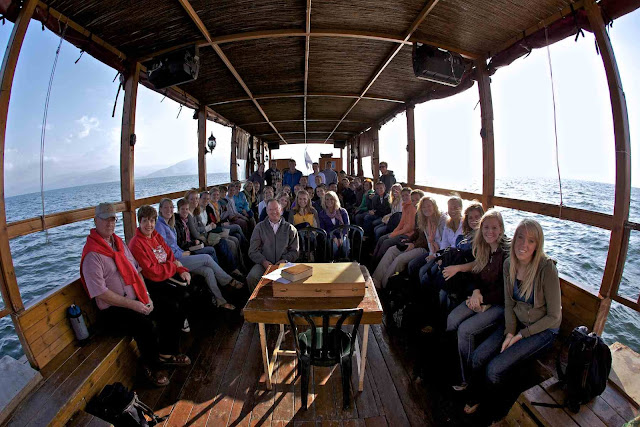 On the Sea of Galilee with the Fall 2009 students.