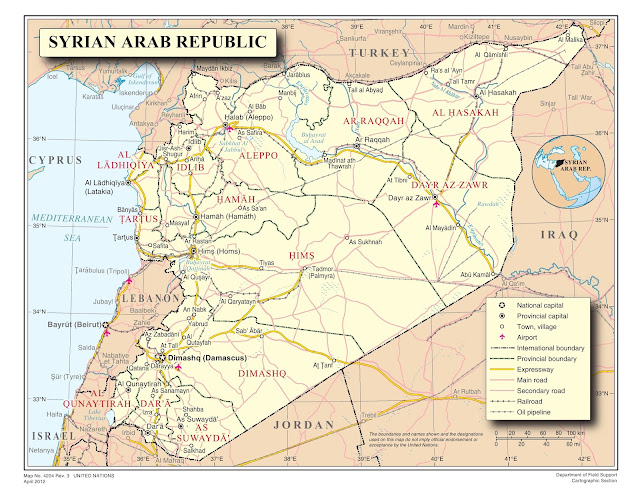 In 1995 I visited Syria for my first and only time. I had traveled overland through Greece, Bulgaria (with my friend Marie and a study abroad group from De Paul University) and Turkey (with my friend Troy).  After a few days in Turkey’s Kurdistan we headed south from Sanliurfa where be crossed the border from Akcakale Turkey to Tall al-Abyad Syria. It was a remote border crossing point that was seldom used by tourists. As I showed my passport to the Syria border soldier I could see that he was stuck on my Cyrillic written Bulgarian visa. I had traveled enough in the Middle East to know that Syria would not let people into its country if they had an Israeli stamp in their passport. I figured that the solider was thinking that the Cyrillic script was Hebrew script and that I shouldn’t be allowed to enter. Wanting to avert such an outcome, I mustered up my best Arabic and explained that the stamp of puzzlement was from Bulgaria. I could see a light go on in his mind. It wasn’t Hebrew. He was visibly relieved. He wouldn’t have to turn me away. Allowing someone who had visited Bulgaria to enter would not incur the wrath of the anti-Israeli regime. Harvested winter wheat south of Tall al-Abyad. Prolonged drought in this region compelled many Syrians to migrate to the refugee of cities. There in frustration with the non-helpful regime they took to the streets.

Tall al-Abyad (White Hill) was not much of a town. It was a Friday morning and the one place to change money was closed. We had Turkish lira and U.S. dollars, but no dinar. The bus to Aleppo was ready to go but we couldn’t buy a ticket. Finally after explaining our plight—“I’m a geography professor from the United States coming to learn more about Syria”--the bus driver took pity on us and consented to take our dollars. The title ustaz (professor) commands greater respect in Syria than it does in the U.S. We boarded the bus and found seats on the last row. Once on the road the kind driver sent back, via his ticket taking assistant, welcoming cups of Arab coffee as a sign of hospitality for the American professor and his friend. We politely declined only to then have the driver send back cigarettes for us to enjoy. The only way to convincingly explain why we were rejecting such hospitality was to explain that we could not drink coffee or smoke cigarettes because they are forbidden in our religion. That was all the driver, his assistant and all the curious passengers needed to hear to then know that we were not rejecting the almost sacred act of Arab hospitality. 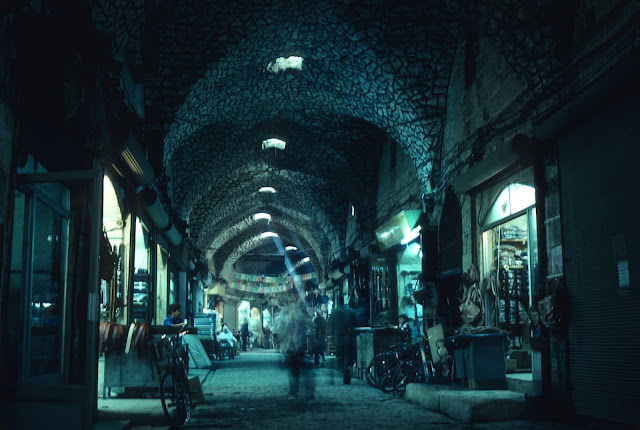 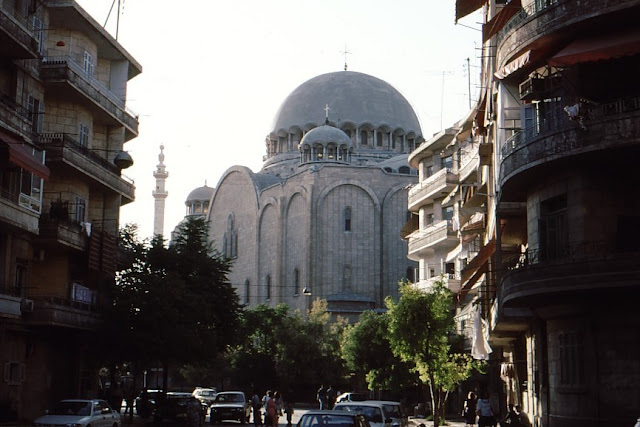 From Tall al Abyad (currently controlled by Kurdish forces) we traveled south to ar-Raqqah (current strong hold of ISIS) and then on to amazing Aleppo. Aleppo is a wonderful city to explore. It is a classic “Islamic City” with a citadel, baths, markets, central Friday mosque and religious quarters. One evening we set out to explore the large Christian Quarter. It was May, the month of Mary. Each church we passed (Armenian Orthodox, Armenia Catholic, Syrian Orthodox, Maronite, Roman Catholic, Greek Catholic and Greek Orthodox) was full of worshipers, mainly women, who gathered each evening to honor the mother of Jesus. At the western end of the vibrant quarter, just down the street from St George’s Greek Catholic Church, a new mosque stood with shiny silver dome. Unlike the Christian quarter of Damascus, the Christian quarter of Aleppo was without perforating mosques. To me the building of a new mosque on the edge of the quarter rather than right in the middle of all of the churches was a sign of religious tolerance. Christian Arabs and Armenians make up about 10 percent of Syria’s population. In all of my travels in the Middle East, the Christians of Syria seemed to be the best treated and the most secure (something William Dalrymple also observed in his interesting book From the Holy Mount). 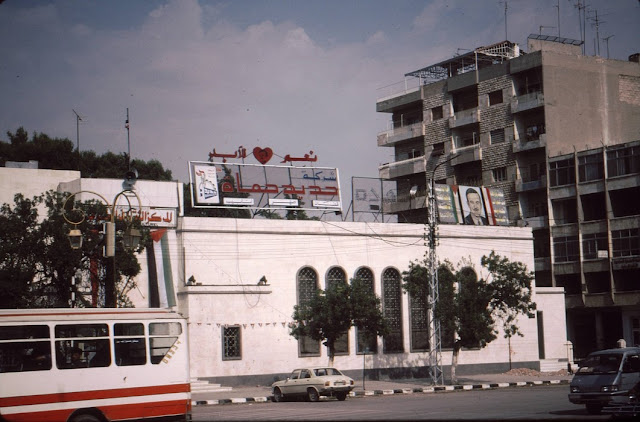 Also on our itinerary was a stop in Hama, the city where in 1982 Hafez al-Assad wiped out thousands of opposition members of the Arab Brotherhood, Sunni nationalists who resented the oppressive regime headed by a minority Alawite. In a noticeable act of presenting a positive outward appearance, the one-time rebel city now boasted some of the most prominent Assad iconography, including the image of Assad in the center of red heart. It felt as if no one dared not be an Assad supporter. As if in competition to demonstrate the greatest loyalty, every city and village in Syria displayed statues, posters and paintings of President Assad and his chosen heir Bassel (who died in a 1994 car accident)--which opened the way for his ophthalmologist brother Bashar to become president in 2000 when his father died. 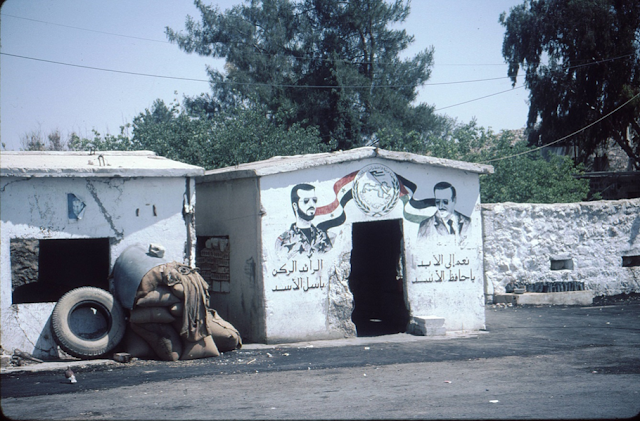 On the road to Palmyra (Bassel and Hafez) 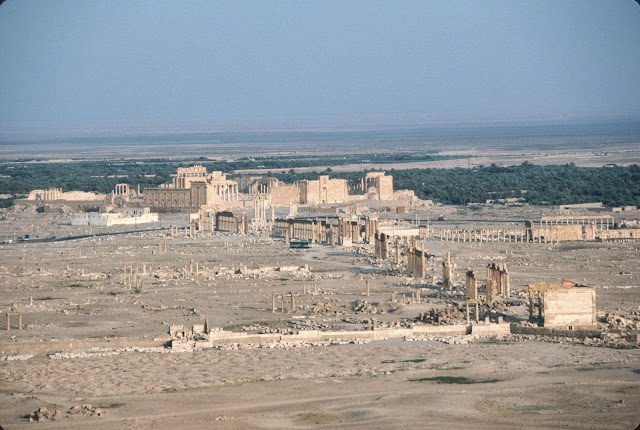 We visited famed Palmyra (aka Tadmor), an oasis in the middle of the Syrian Desert that fed and watered countless caravans. It may have even hosted wisemen from the east. Many of its magnificent Roman ruins have since been demolished by ISIS. 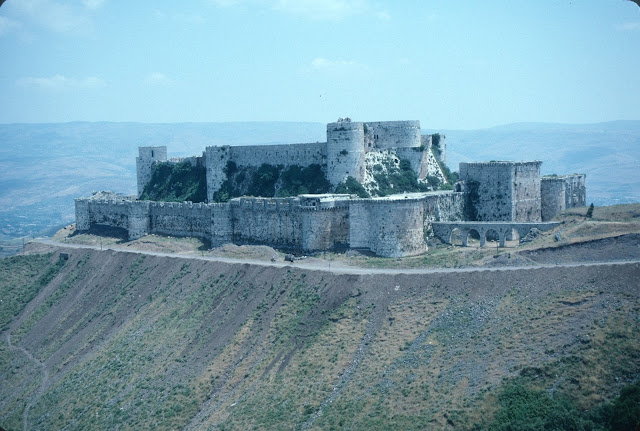 We visited the well preserved Crusader castle of Crac des Chevaliers, that over looked a main route to the Mediterranean Sea. It stands as a reminder of a time when European Christians came to conquer and control, something that has not been forgotten in the Arab World. While there we met a group of women sight-seers from the coastal city of Tartus. This was the mid-1990s and they were coiffed with big hair similar to the fashion of the day in America. When I asked why they were not wearing a hijab or scarf they noted that doing so was a choice and they chose to go uncovered. No one challenged them. 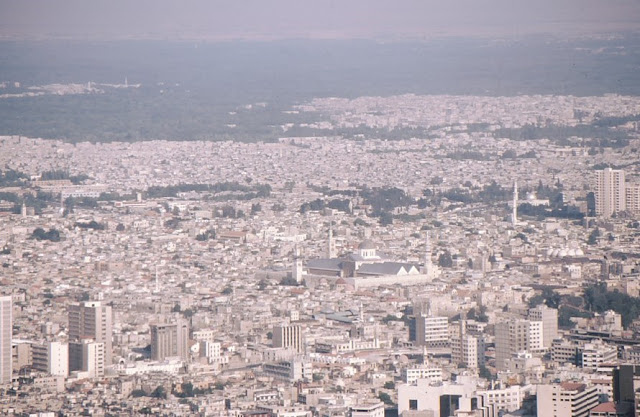 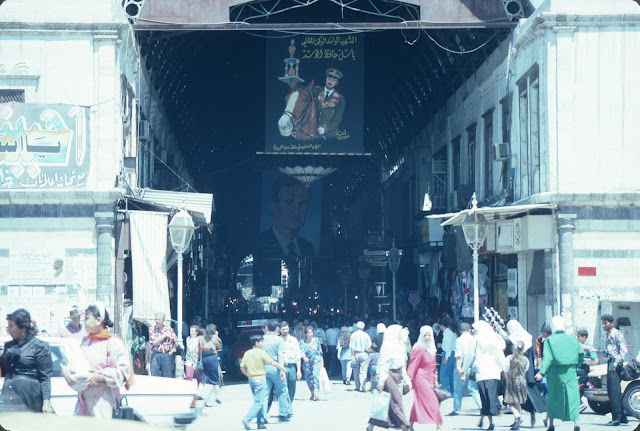 Entrance to Old City of Damascus 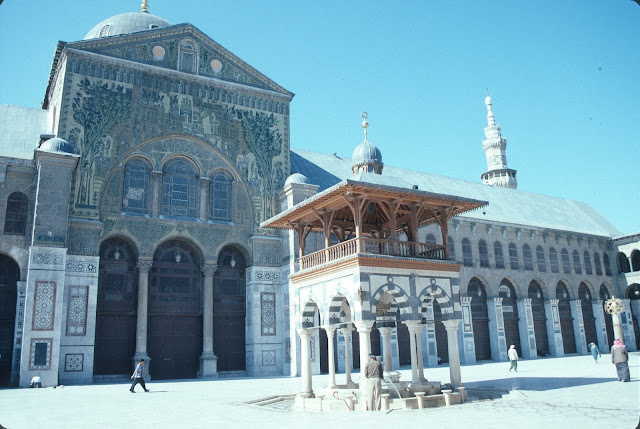 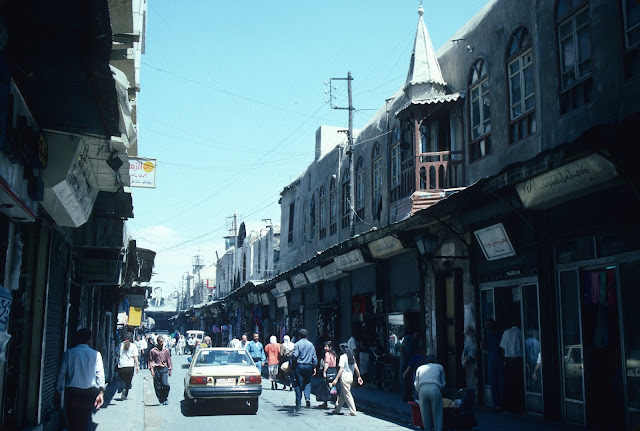 Finally, we explored Damascus. There from the hill-top where both Mohammad and Mark Twain looked down on the long inhabited oasis, we could look across to another hill top crowned with the well-protected royal palace of the Assad family—up and away from any opposition. We visited the grand Umayyad Mosque built in place of a Byzantine basilica. Inside a shrine houses the head of John the Baptist. That mosque has taken a beating in the on-going civil way. Its square minaret is no-longer. I visited the ministry of tourism where a generous official loaded me up with a set of tourism posters showing some of the best of Syria’s many historical antiquities. Those posters now decorate the walls of the class room where I teach Middle East geography. We walked the Street called Straight where Paul walked two millennia ago. There, in a brass shop where I bought a souvenir canister, I asked the twenty-something clerk who helped us where she was from (something this geographer always likes to ask). When she answered with Safad (an Arab/Jewish city in the Upper Galilee) I surprised her by saying that I had visited Safad (now called Zefat by Israelis) several times. She inquisitively asked what it was like. A strange request about someone’s hometown. She then explained that her parents had fled Safad in the 1948 war. She had been born in their city of refuge, Damascus.

Ten days travel in Syria was not enough. There was plenty left unseen and undone to warrant future trips. It pains me to know that much of what I saw has been changed forever, much of it destroyed. What pains me even more is knowing that the kind bus driver, the devout Christians, the free-spirited Muslim women, the accommodating officials, the homesick refugee and all of the hospitable drivers, clerks, waiters and merchants I met are now having to live in or flee from a country torn asunder. I had hoped that the Arab Spring would bring a more open and free society to Syria, one where people didn’t live in daily fear of what happened in Hama and to so many others who challenged the regime. Unfortunately, the Assad regime has been unwilling to relinquish control, the rebel groups have fractured, and ISIS has moved in from its seed bed of Iraq and unleashed a whole new type of terror and theocracy in what had been a functioning and tolerant society of mixed religions and ethnicities.

The Syrians I met do not deserve this current hell. They do not deserve to be vilified and marginalized. They deserve food, shelter, safety and protection. They also deserve the same warmth, welcome and hospitality that this guest once experienced in their land.
Posted by chad at 10:39 PM