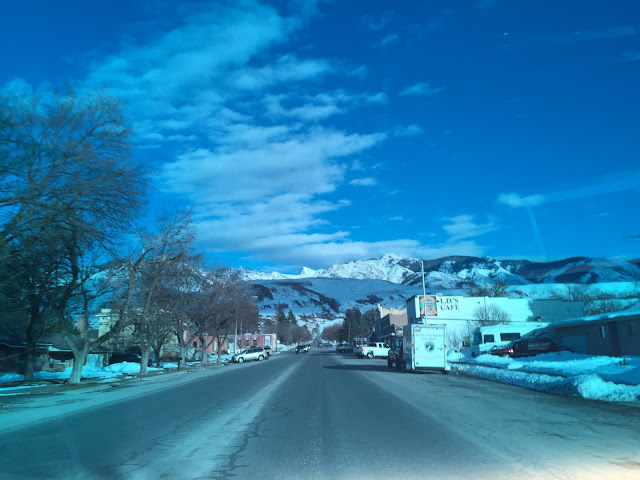 Insider info indicated that Cherry Peak would not be open much longer due to limited snow. We had hoped to join with other Emmetts for a ski day next month at Utah's newest resort--opened just this season with two of three lifts in operation, but we decide that we had better do it now. So, after a fun, full day at Beaver Mountain we headed north to Richmond Utah, turned right at the only light and headed east towards the mountains for our second Yeti resort of the day. 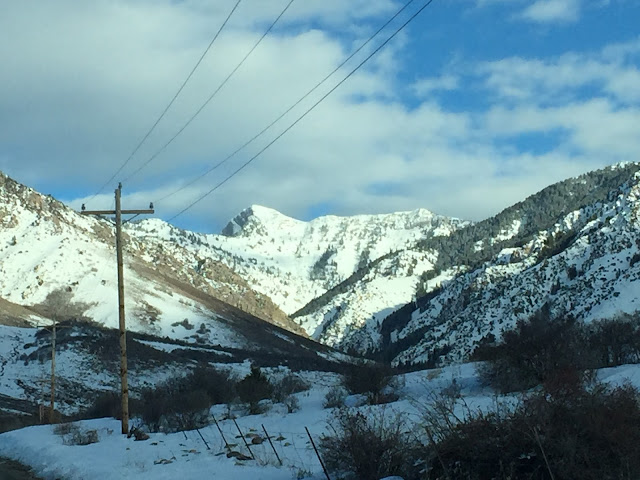 Cherry Peak (center) is a prominent rise on the west front of the Bear River Range.

Cherry Peak ski resort is the dream of John Chadwick--whose family lived in our same LDS ward growing up. His dad was our bishop when I decided to serve an LDS mission. John's mom directed the Road Show (which included a live orchestra--I played cornet--and dancers on roller skates) and his older sisters were good friends of mine. One of John's first jobs was as a car salesman--he sold me my blue Ford escort wagon. Two years ago John approached my youngest brother Tom to see if he would help set up a ski shop for the planned resort. Tom agreed and has worked hard to help make the rental side of the resort a success. Tom has years of experience in the ski business, so he has lots of good ideas (not all of which are welcomed or implemented--such is life). 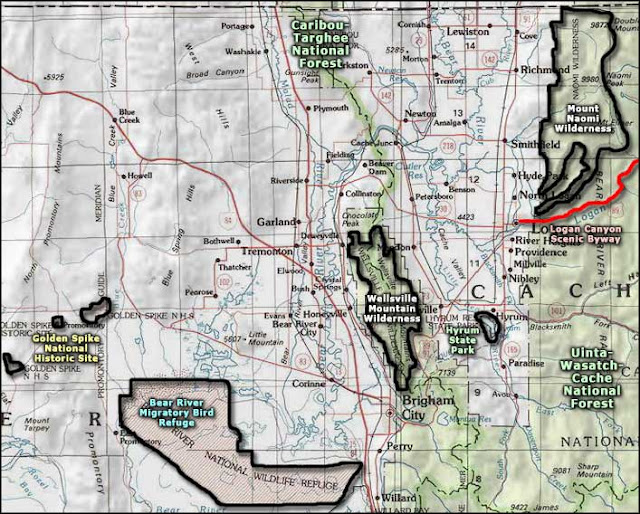 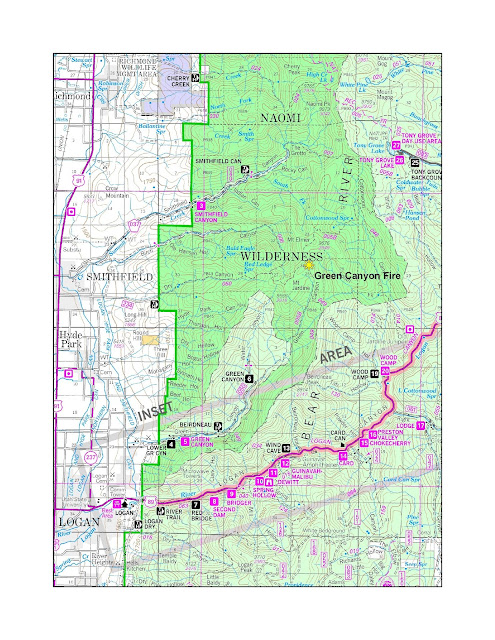 FYI: Fun to do summer activities to the east of the resort include hiking Mt. Naomi and camping on the banks of Tony Grove and White Pine lakes. 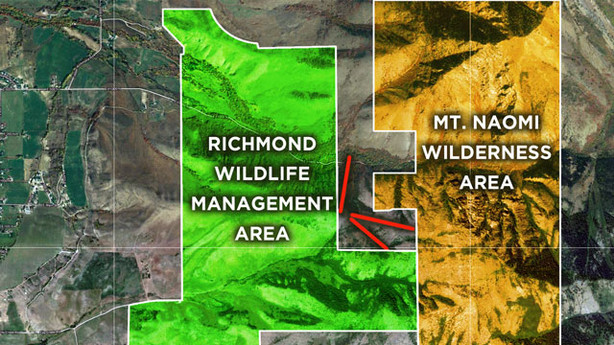 Cherry Peak Resort gets it name from one of several prominent peaks (including Mt Gog and Mt. Magog) in the Mt Naomi Wilderness Area. It is just minutes east of Richmond up Cherry Creek Canyon where the resort abuts the wilderness area. 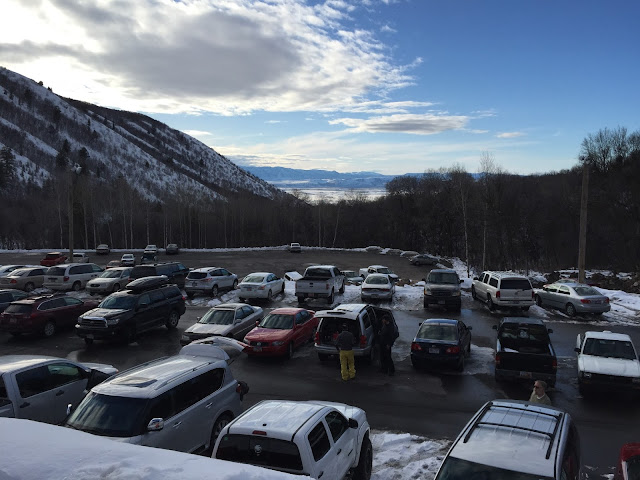 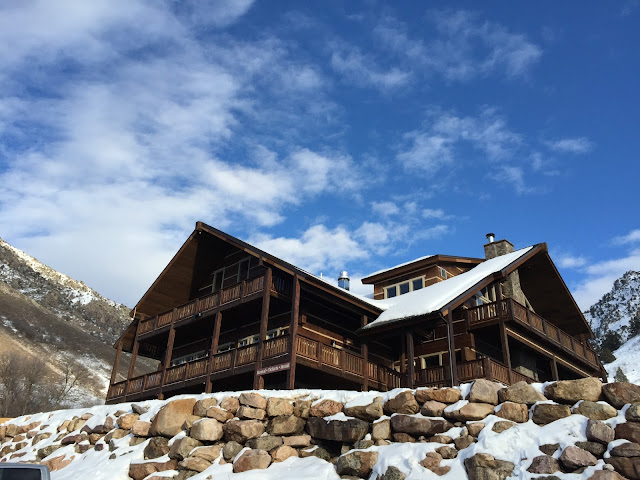 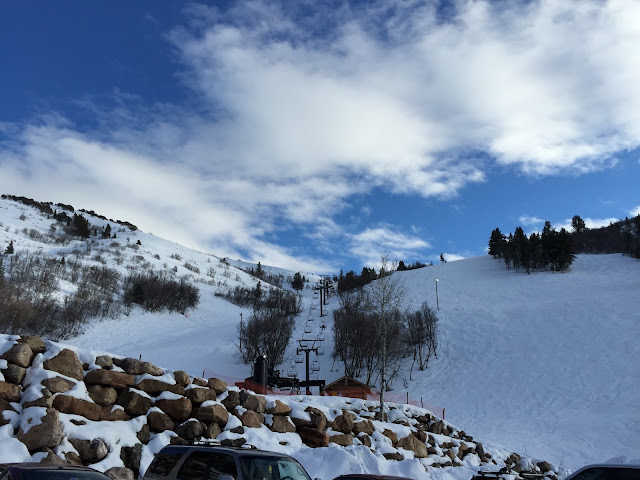 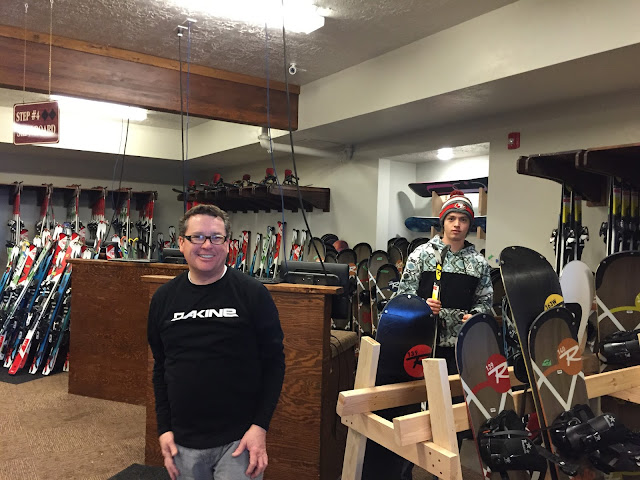 First stop was to check in with Tom who was working the evening shift. Several hundred people were coming to ski, board and tube for a company party, so ski rentals were hopping. 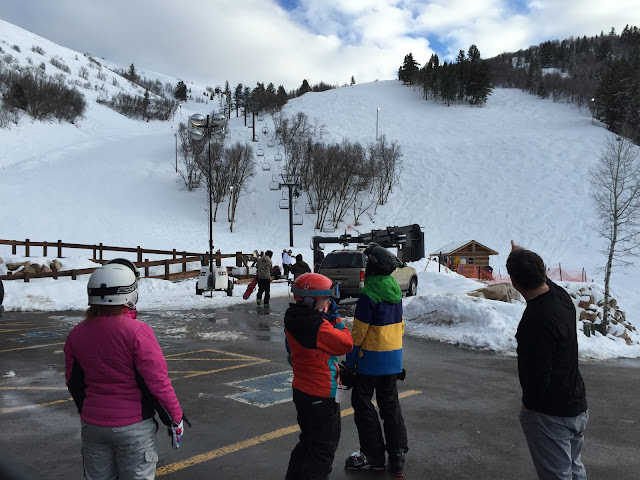 Tom then took us out for a few tips on where to ski. 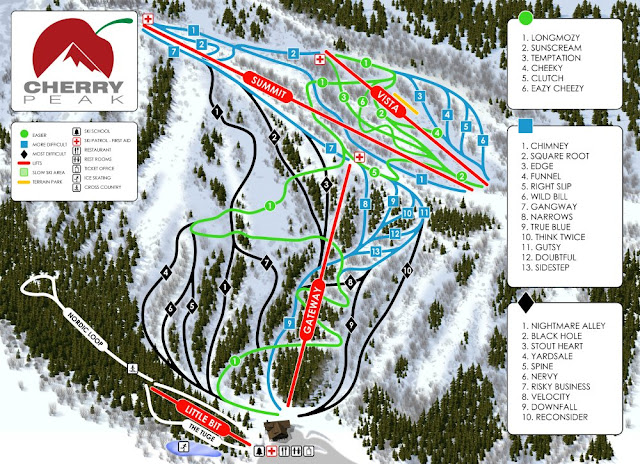 There's not much to the resort. It is small and relies heavily on snow making machinery. It is a great place to learn how to ski, to have evening youth skiing parties, or to drop in for a few runs after a day of milking the cows in Amalga or teaching school at North Cache Middle School in Richmond--both just down the road. It is not the place to go for long vertical runs or lots of deep powder. 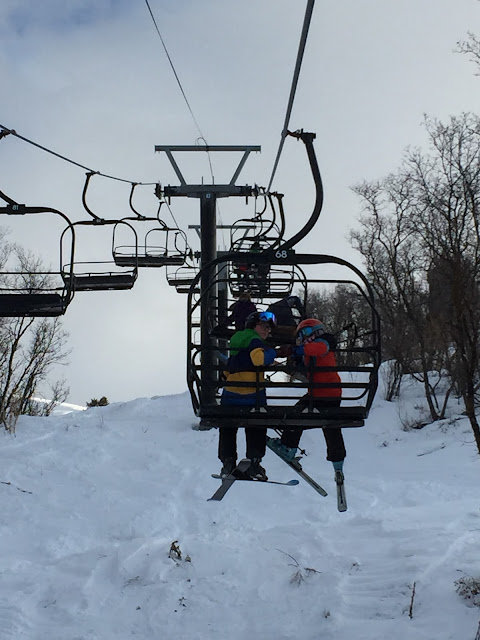 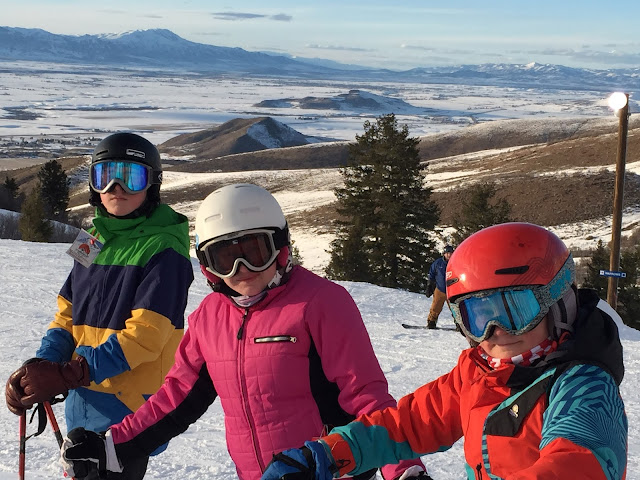 Northern Cache Valley in the distance, plus some pretty bare south and west facing foothills. 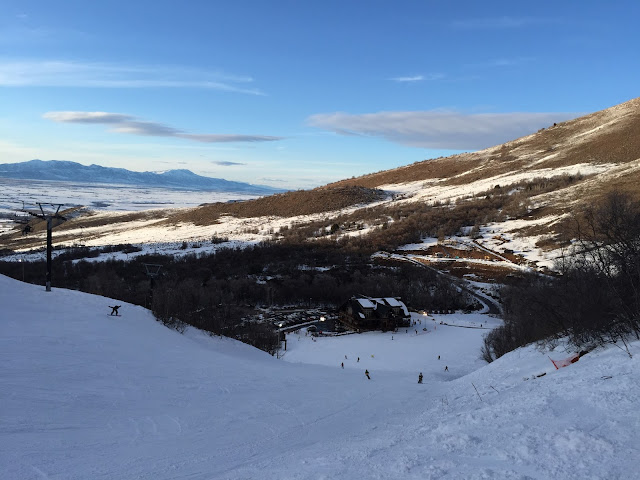 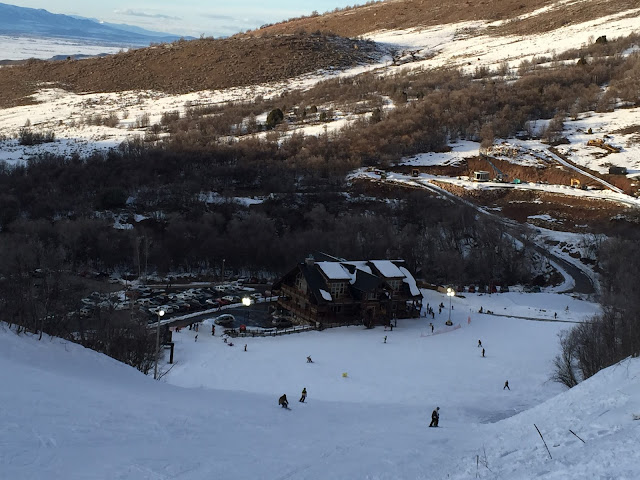 We were limited on time so we took a run on the Gateway lift down the Narrows (a bit icy from warm days and freezing nights) and True Blue, above, (the Chadwicks are Aggie fans) which was well groomed and fun to ski. 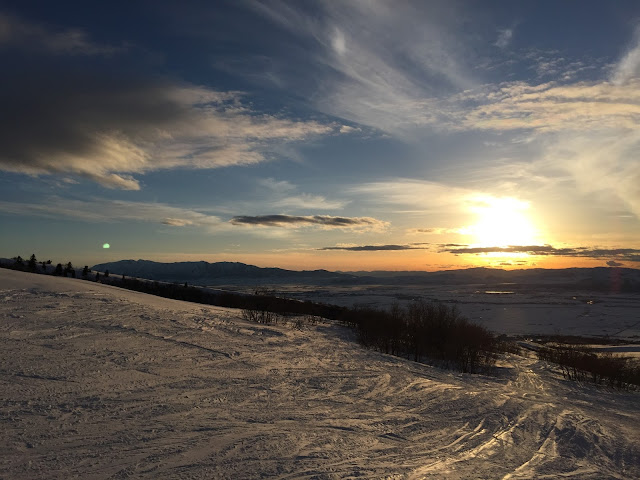 Sun setting over Cache Valley (named for where fur trappers cached their pelts). 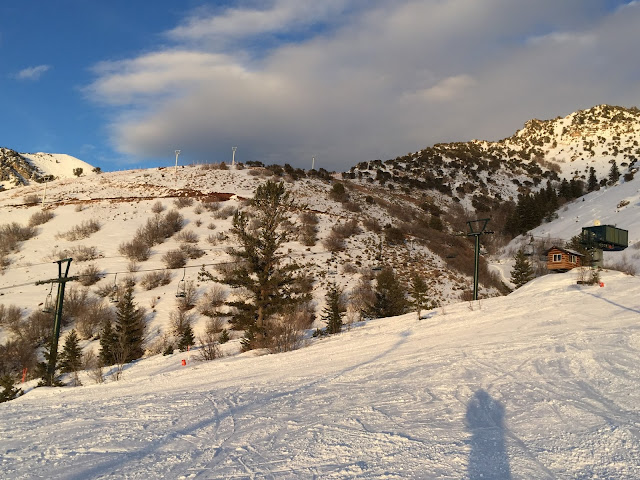 Next up was a few runs on Vista. The white towers for the Summit lift (opening next year) can be seen on the ridge. 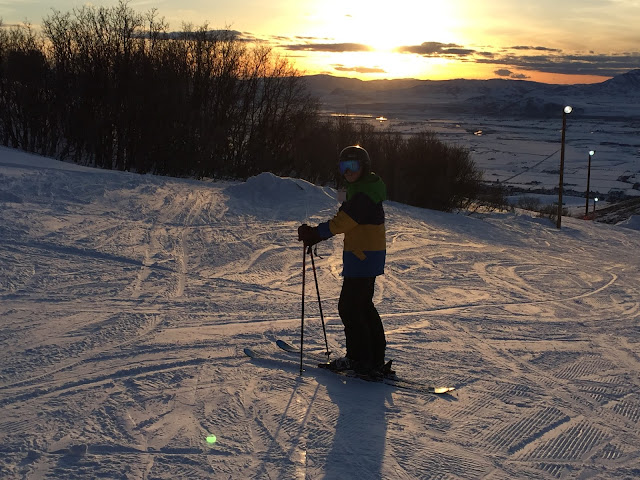 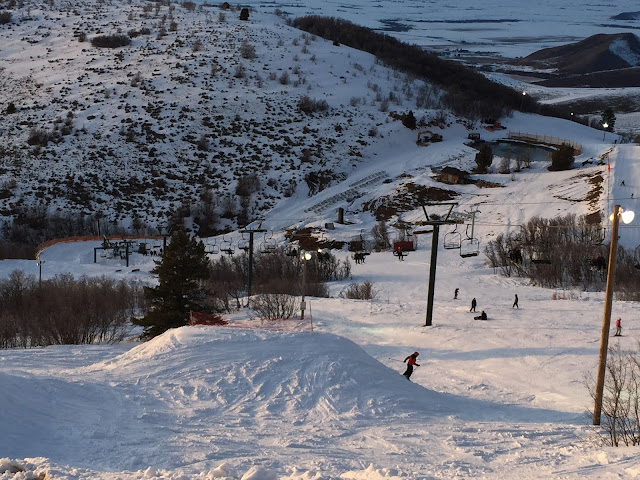 Part of the main run was re-groomed between 4-5 pm so that the evening skiers had soft snow to ski on. Unfortunately the grooming machine broke down before the last few swaths could be completed. Will is descending one of the man made mounds that added to the fun. 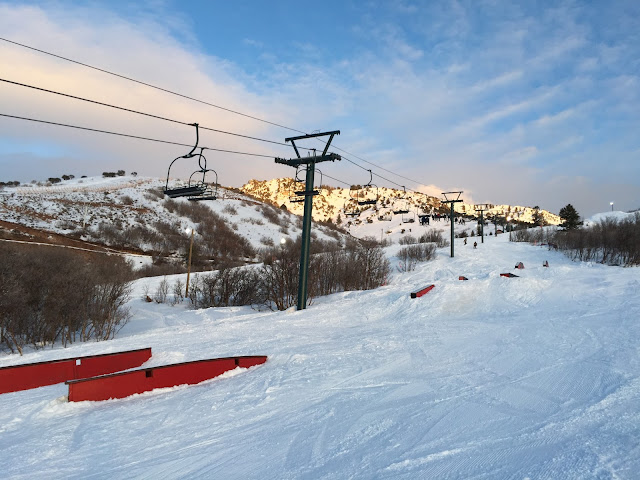 The terrain park at the bottom of Edge. 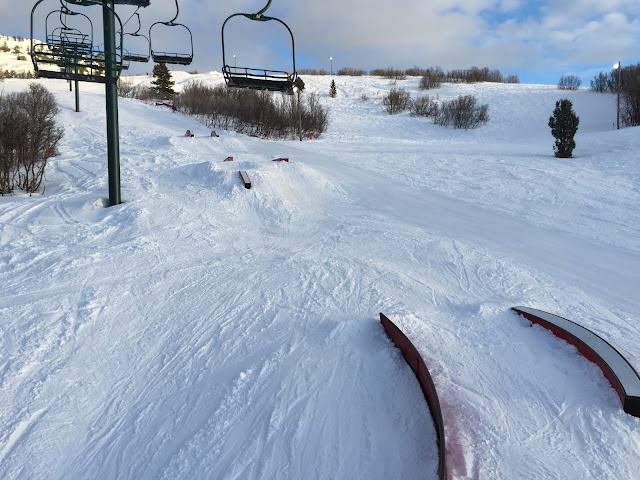 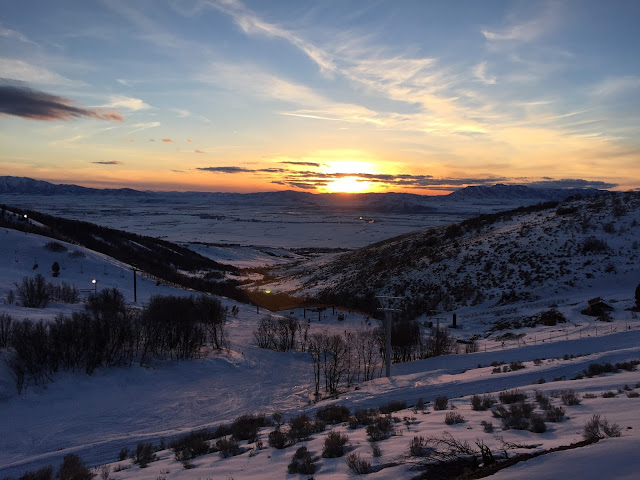 Looking down to the base of the Summit and Vista lifts. It was a fun hour of skiing. Unfortunately our legs were well worn from a long ski day and we still had a dinner date in Logan and then a two hour drive home to Springville. We look forward to giving Cherry Peak another try once the upper lift is completed. It is also on my list as a great place to take the grandkids when they are learning to ski. 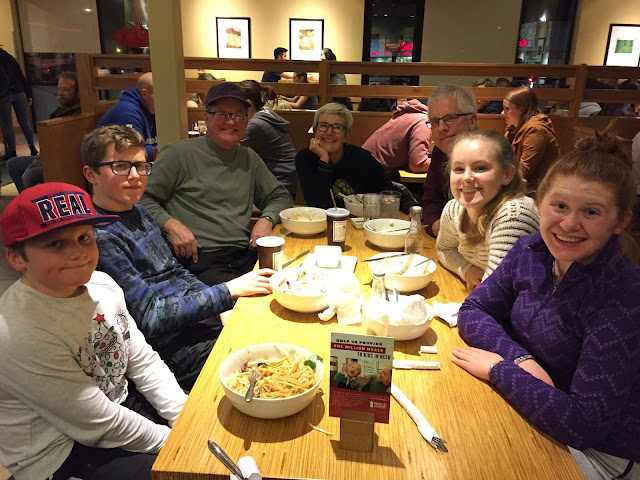 For dinner we met up with our Semester at Sea cabin neighbors (she is a theater professor at USU), whose daughter was Sarah's cabin mate. A happy gathering at the end of a fun day of double resort skiing.
Posted by chad at 4:52 PM