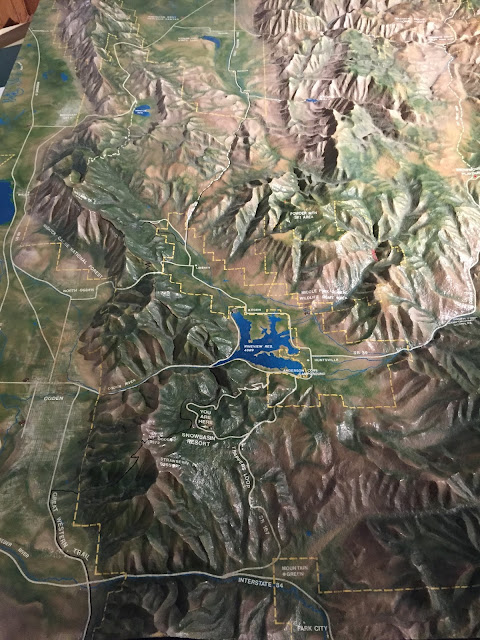 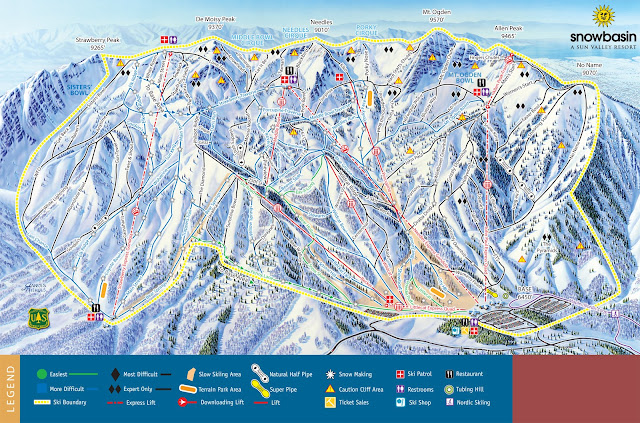 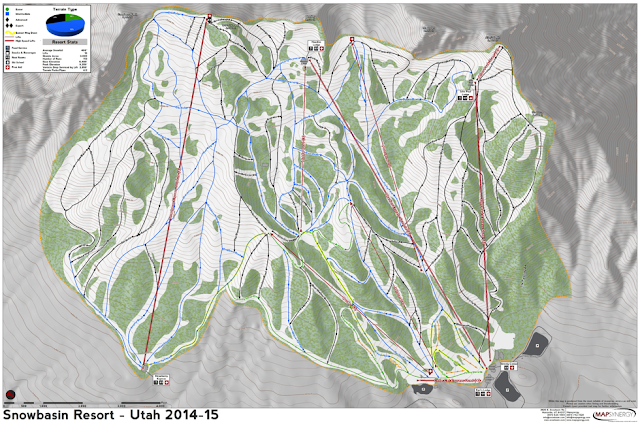 We set out this morning with high hopes. High hopes that Joel was recovered enough from his concussion to ski for the day (doctors gave their approval Thursday at a checkup). He was. High hopes that Chad's incision on his calf (the six stitches were moved on Thursday) would not be irritated by his boot. It wasn't. High hopes of skiing a big mountain,with two gondolas and an Olympic downhill run to try out. Partially. And high hopes that the small storm front passing by over night would give way to a pleasant afternoon (as forecasted). It didn't. We had no idea we also needed to have high hopes that high winds would not close down all but three lifts. They did.

It is about a 90 minute drive (listened to rapping Alexander Hamilton as we drove) from Springville to Snowbasin--directly east of Ogden on the leeward side of the Wasatch Mountains. Last time I made the drive to Snowbasin was during the 2002 Olympics when the Emmett clan congregated to watch the impressive Men's Downhill event. It was a blast. I was originally assigned to be an Olympic Volunteer at Snowbasin where I was to be an on-slope helper at the ski events. Problem was for two weeks I would have needed to be at Snowbasin each morning by about 6:00 AM to help condition the runs. That looked to be too much of a commitment from me. Making the early morning long drive every day--expanded in time by the need to use park and ride up to the resort and BYU only giving students and faculty one week of the two weeks off from school compelled me to turn down an amazing opportunity. Instead I was assigned to be one of the back-up volunteers who served where needed, taking tickets, sweeping away snow and cleaning up grandstands. Prior to the Olympics I had skied a few times at Snowbasin late in the season after Beaver Mt had closed. Back then it was still a no frills resort with an old lodge and no gondolas. 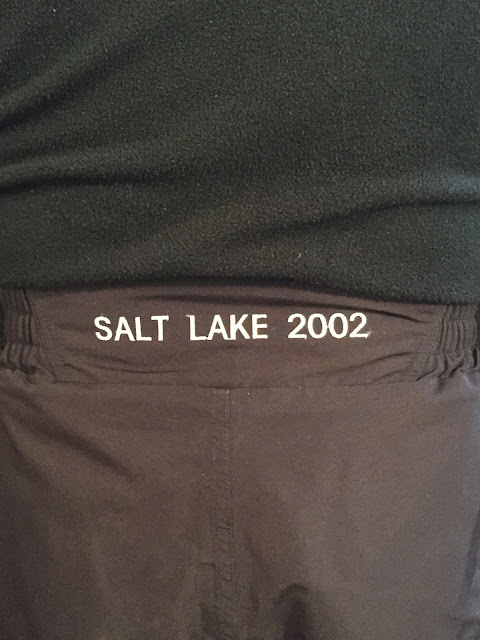 We arrived to a well ordered parking system in a large paved parking lot (so nice not to have to have to tromp through mud after the night time rain). We entered "majestic" Earl's Lodge (built for the Olympics) to get our tickets and to use the restrooms. Wow, it felt like walking in to the lobby of a ritzy hotel. Truth be told, I'm not sure chandeliers and ornate curtains are needed to make my skiing day complete. But they certainly are ready for another SLC Olympics. 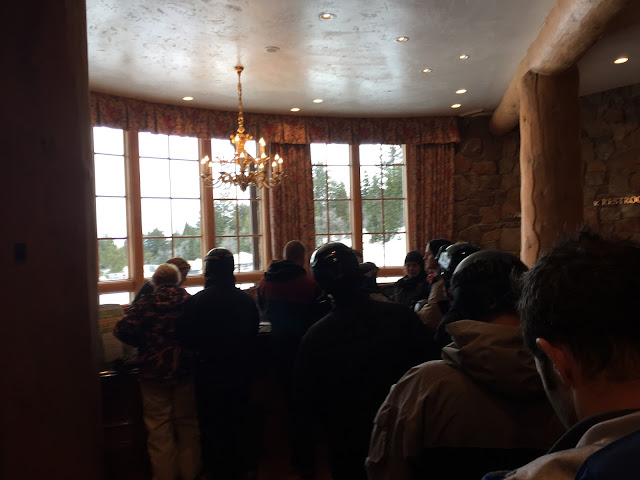 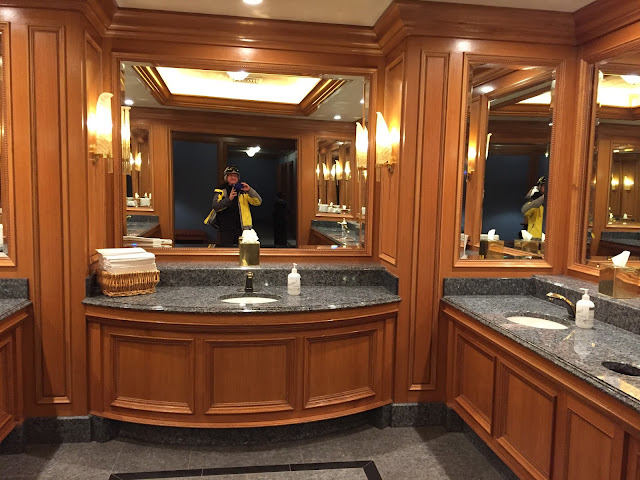 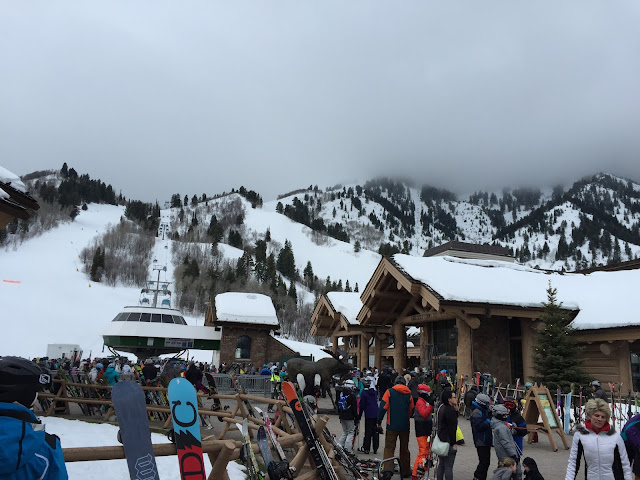 It was warm and clear at the base, but the top of the mountain was enshrouded in clouds. Not knowing what that would entail, I decided we should start out at the north end of the mountain on John Paul Express where we would try out the Olympic downhill run. From there we would make our way southward to the Strawberry Gondola. Ah, the best laid plans. Our yet-to-be-sat-in chair of John Paul was covered in a sheet of frozen rain which our four butts thawed on the way up. About two-thirds up the long lift, we entered the think covering of clouds. It was a white out. We got off the lift not knowing where to go and not being able to see anything other than occasional round green signs marking the easiest way down (Mt. Ogden Bowl Road). Eventually we descended below the clouds and enjoyed the run. Up next was the Needles Gondola. Out of the wind, we started to overheat. Up top was still a white out. We had thought to traverse over to Strawberry Gondola (skied it soon after it opened in1998 and loved it), but a sign at the top informed us it was closed (high wind problems). So instead we followed the green signs down Sweet Revenge. About half way down the mountain winter conditions gave way to spring skiing conditions, complete with soft corn snow. The quick change in conditions, caught Will off guard. He caught an edge and took a hard fall. Luckily Sarah was nearby to help him reassemble. Discouraged by the white outs on top and deterred by Will's sore arm we headed in for an early lunch (11:15 which is about par for the course for the Emmett clan). Lot's of other folks had the same idea. Luckily it was warm and sunny enough to sit out side on the large patio. FYI: Snowbasin does not allow brownbag lunches in its fancy lodges. 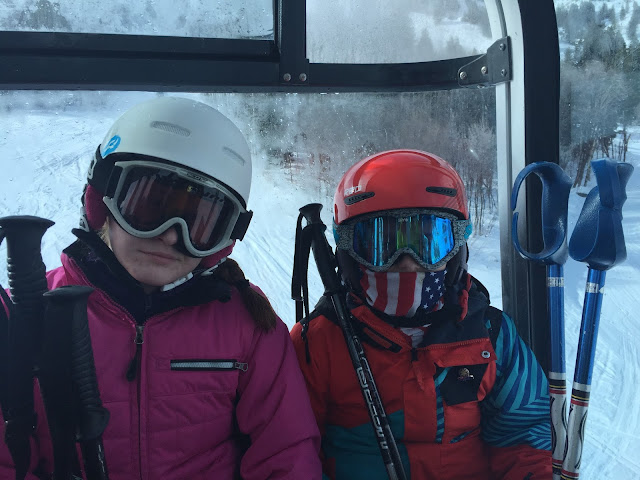 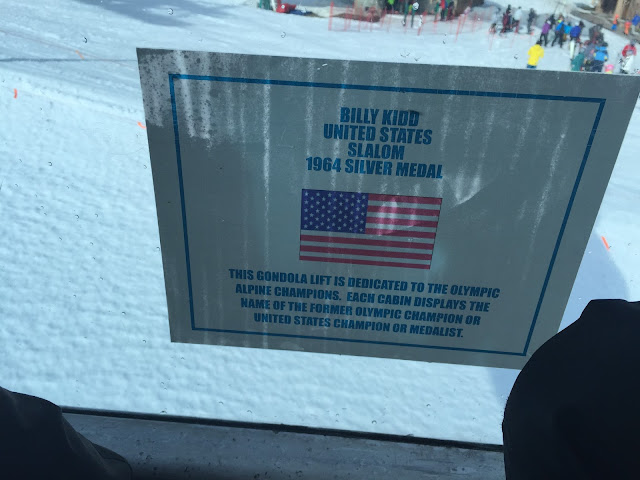 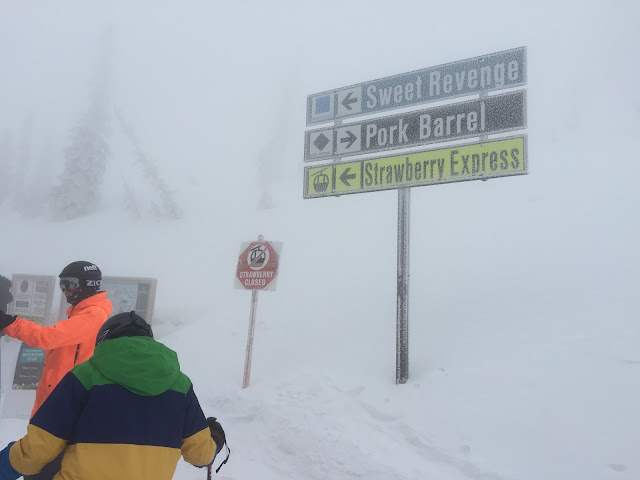 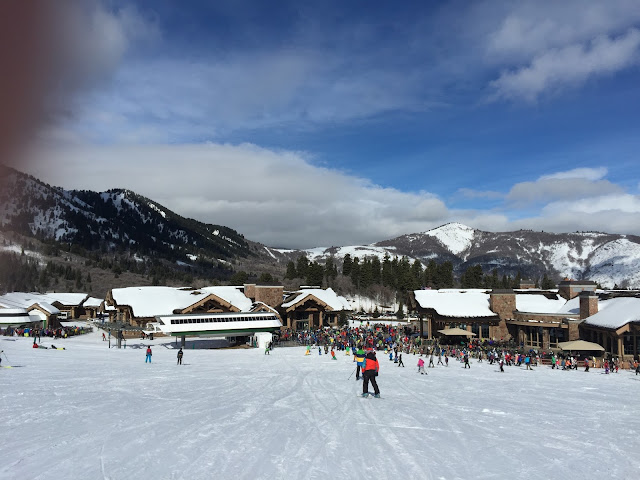 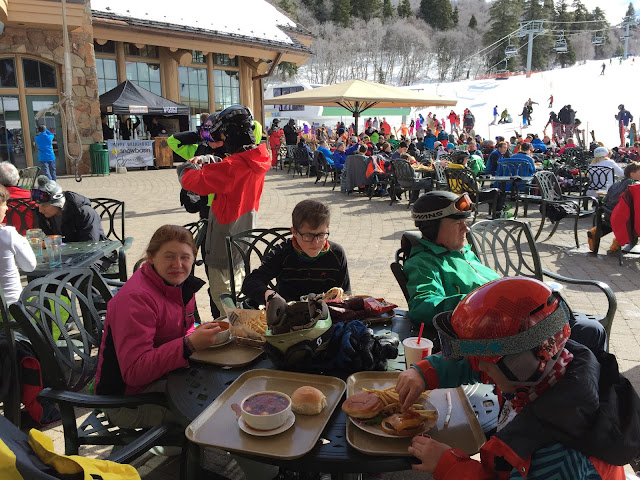 Tasty minestrone soup for me. The sun was nice--we haven't seen much of it lately in the valleys of inversion. 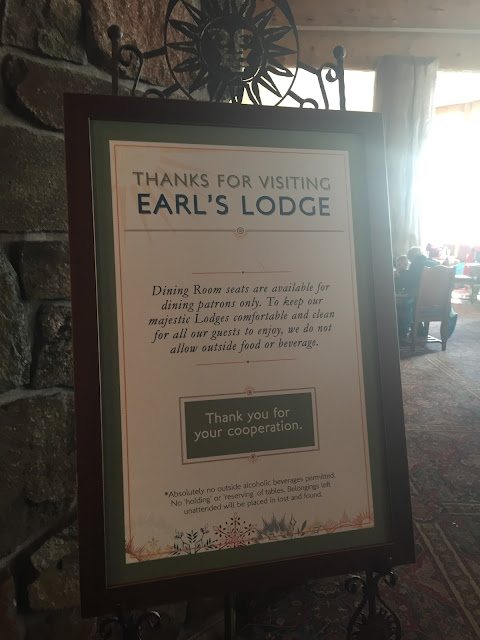 With burgers going for $12, brown-bagging options would be nice.

After lunch we gave John Paul another try.  This time we found our way down the sufficiently challenging Grizzly Downhill (the Men's Downhill Olympic run).  I'm pretty sure we made many more turns that the Olympians do in their death defying flight down the steep mountainside.The long run included soft crud, hard-packed, groomed, moguls and near slushy snow at the bottom. The kids managed it all like real champions. It was probably the most challenging run so far this year and certainly a quad burner. 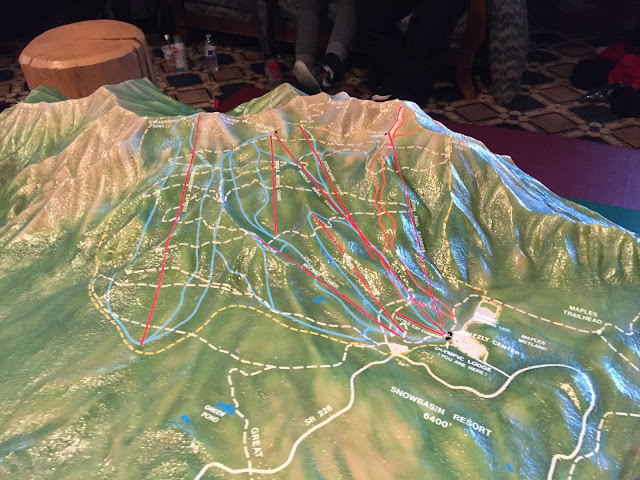 Downhill runs are in orange. 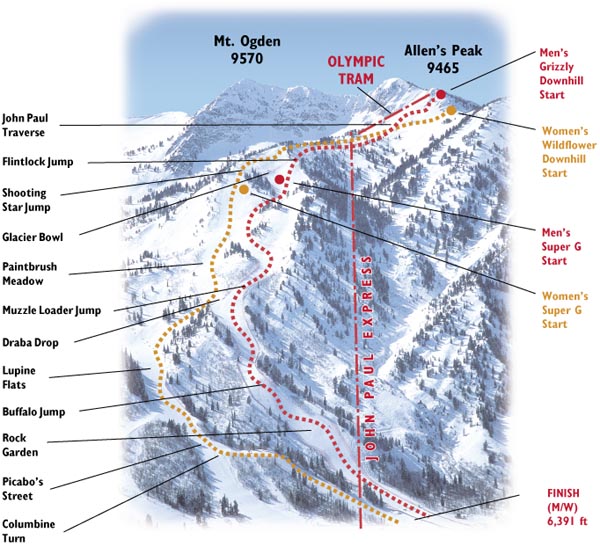 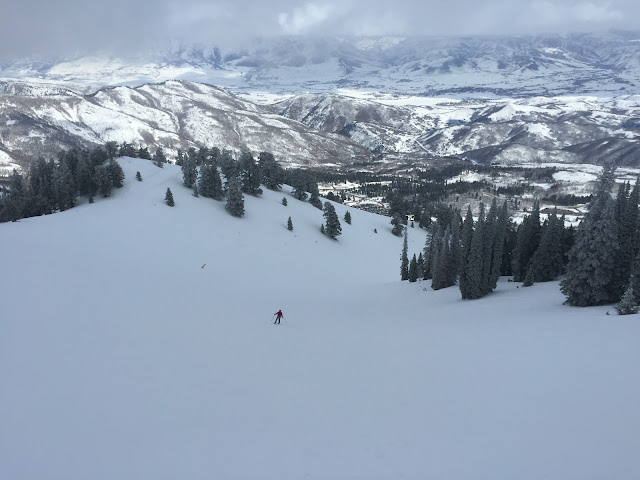 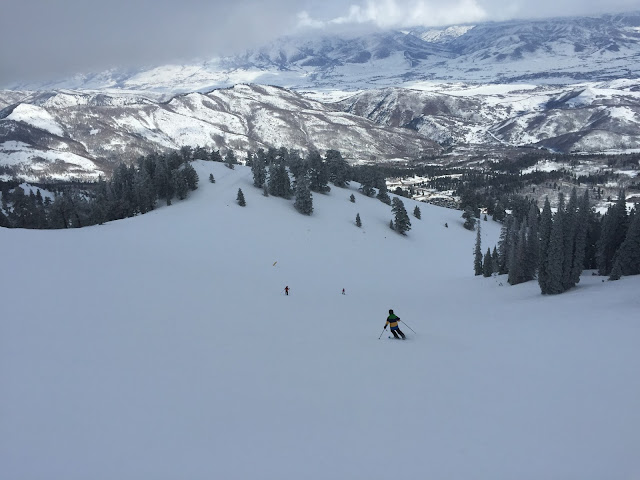 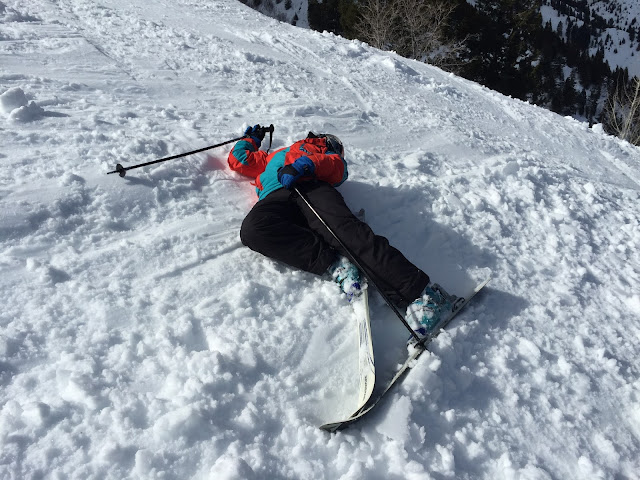 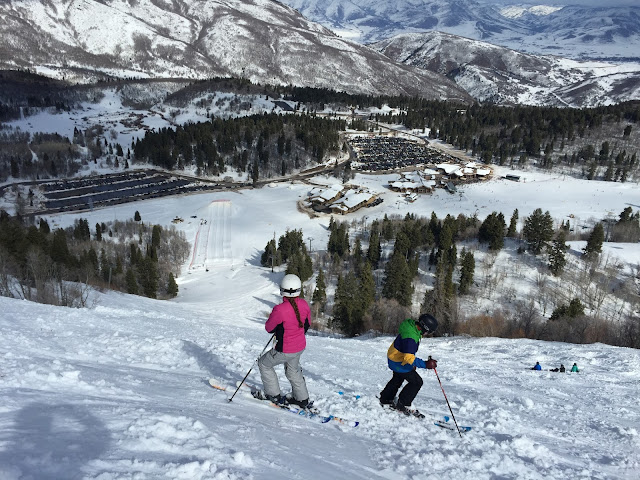 At the bottom of the hill there are three parallel tubing runs. That is where the finish line and grandstands were located. This photo is taken at buffalo jump where the downhillers would come flying into view from the finish line.

3,000 vertical feet in 1 minute 29 seconds to win the gold for Austria. We did not ski it like this, nor could we see much of the upper portion of the hill.

Since there were only three lifts open, the line for the gondola was packed (about 10-15 minutes) so we gave the short lined John Paul another go. By now it was afternoon, but no sight of any clearing on top. Will was starting to lose interest so we filled him up with hot chocolate in the mountaintop John Paul lodge (more chandeliers!). That worked to get him down the mountain. Then while he rested in the lodge, the rest of us took one last run down Mt. Ogden Bowl. It was still socked in on top and the wind was still blowing hard enough to keep all the flags full furled so we gave in to our tired legs realizing that the rest of the mountain would have to be explored on another day when the clouds and winds were in our favor. A 2:40 departure was not part of the plan. Nonetheless it was a fun day at an impressive resort (at least the parts we saw). 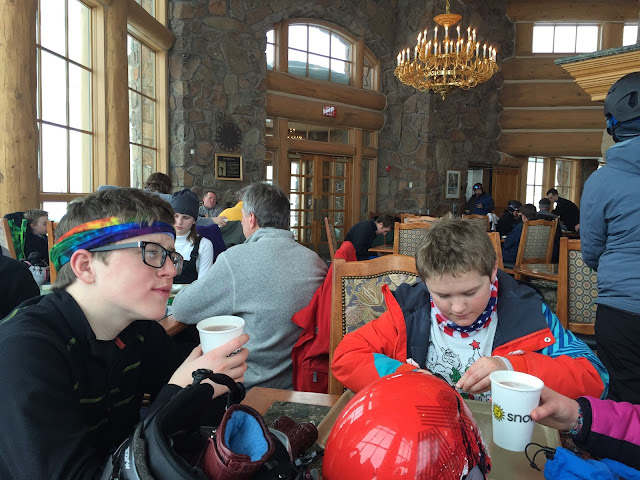 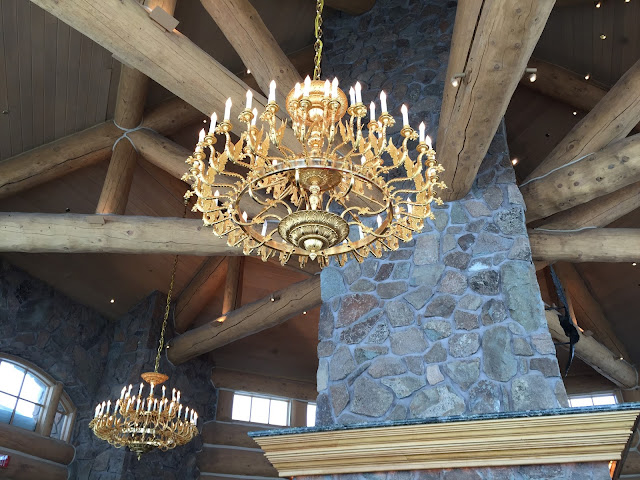 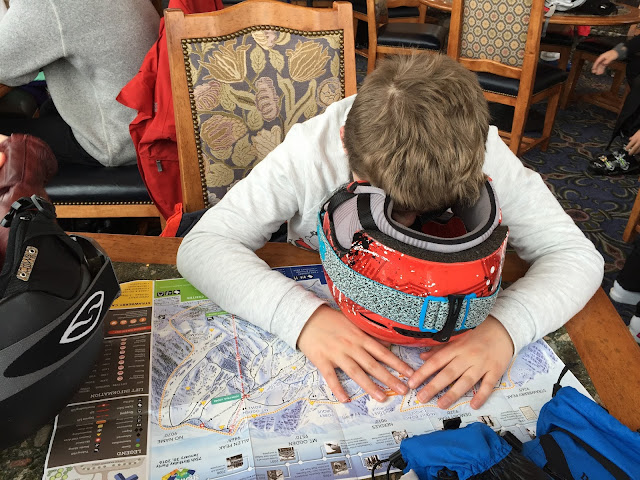 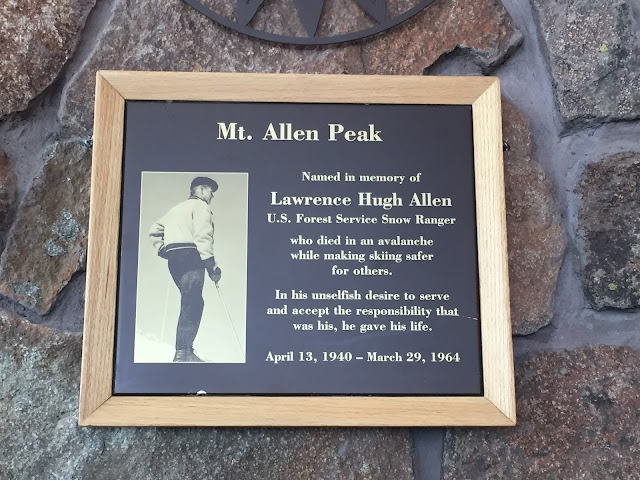 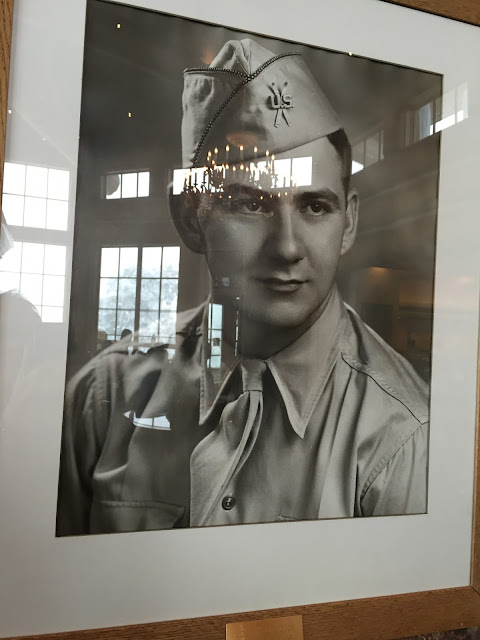 "Recreation skiing grew rapidly after WWII thanks in large part to the energy and enthusiasm of the veterans of the 10th Mountain Division. During the War, these soldiers, specially recruited for their expert skiing abilities, wore white camouflage uniforms and were mounted on skis. They were able to move swiftly and quietly through forests deep in snow where enemy troops — unprepared for summer warfare — could not follow. Nearly 1,000 soldiers of the 10th Mountain Division lost their lives in WWII, including Ogden native John Paul Jones. Jones lost his life in the Battle of Belvedere in Italy where the 10th prevailed and was the first Allied unit to cross the Po River. The John Paul lift at Snow Basin was named after John Paul Jones, who had learned how to ski at Snow Basin and had a special love for the area." https://www.snowbasin.com/about/history/

Sarah's original thought was that John Paul was in reference to two of the Beatles since she had noticed on the trail map at least four runs are named after Beatles songs: Strawberry Fields, Penny Lane, Get Back and Let It Be (and perhaps The Walrus). 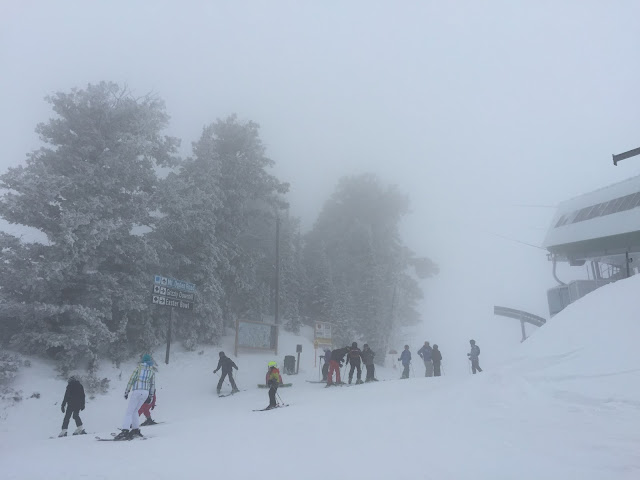 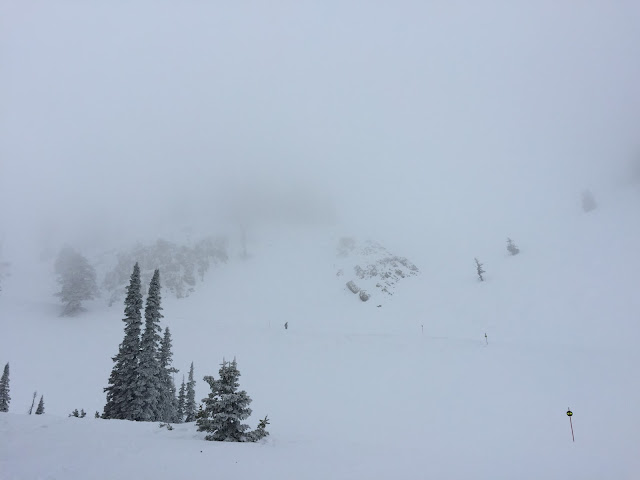 Last run looking up the mountain. 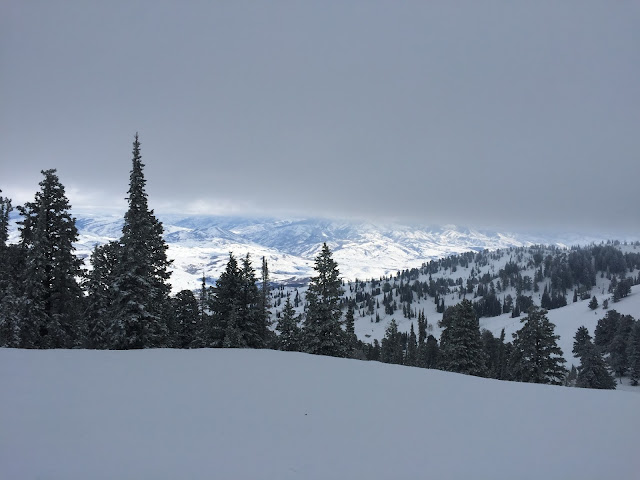 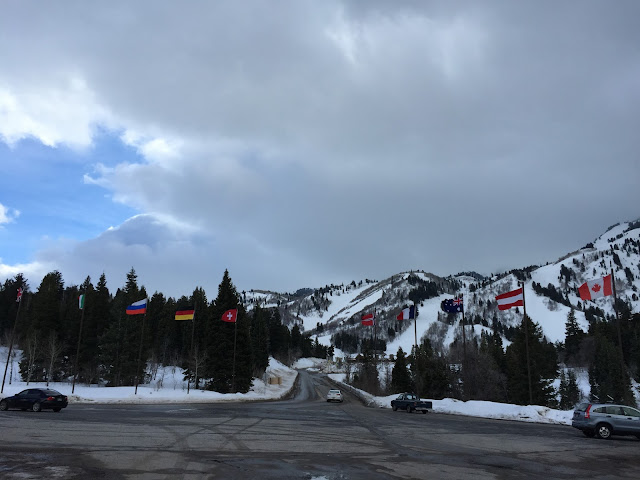