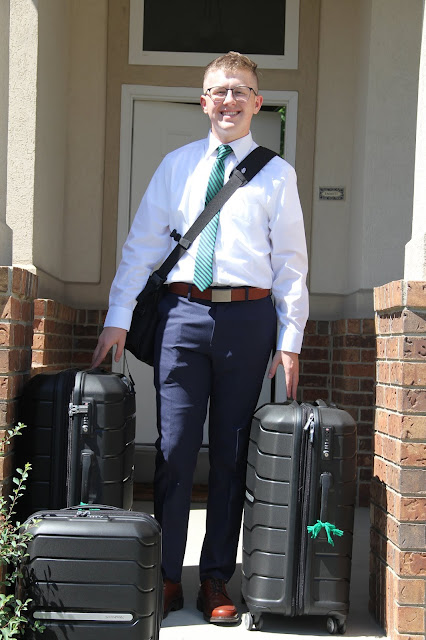 Tonight at 9:00 pm Joel flew out of Salt Lake International Airport to Accra Ghana via a one hour layover in Amsterdam. He will spend three weeks in the Ghana MTC (Mission Training Center) in Accra. He will than spend the remainder of his two year mission in the Cape Coast Ghana Mission. Send e-mails to joel.emmett@missionary.org.
If you would like to receive his weekly e-mail back to friends and family let me know and I will add you to the list: chad_emmett@byu.edu

No suits are required. Just white (mostly short sleeve) shirts and slacks. Last night when packing we discovered that he was under his 50 pound weight limit for his two checked bags.  So today we added more things including staples like peanut butter (three jars) and jelly (two jars); Swedish fish, spiced almonds, dried mangoes and apricots (from Trader Joe's); and Cliff bars; plus more toothpaste and other toiletries. When we checked in both big bags were at the 50 lb limit 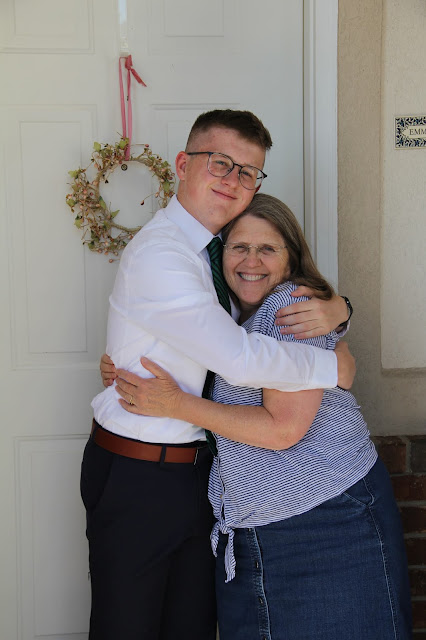 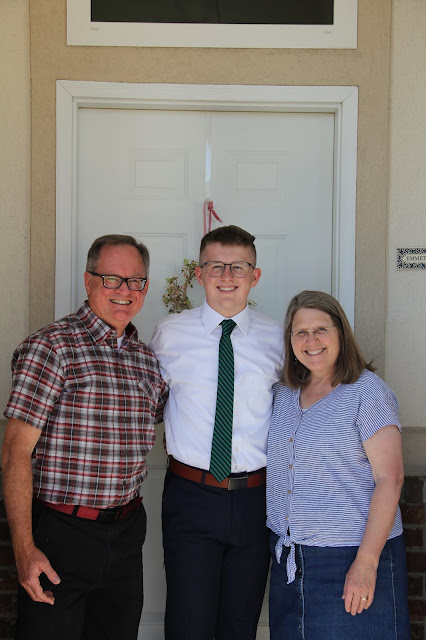 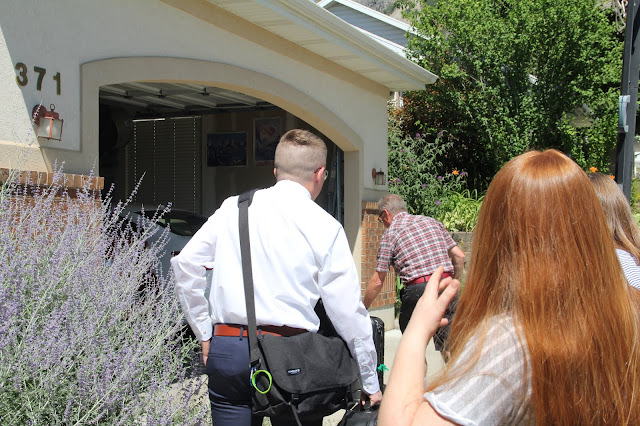 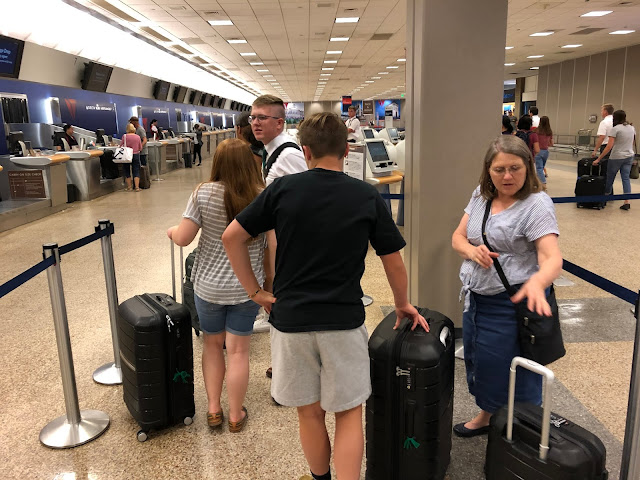 As we were walking through the parking garage we passed a missionary (and his family) who had just returned from his mission. The two missionaries, one leaving and one returning, locked eyes, smiled and gave a nod of the head and that was the beginning of Marie's tears. In the airport there were about 12 elders (three can be seen in the photo above) checking in for the same flight to Ghana. Joel already had met two of them via social media connections and getting together for lunch a few weeks ago. There were also an equal number of missionaries waiting with welcoming families congregated around at the luggage carousels. It was a missionary fest. Amazing to think of all of these families who have all just spend much money and many hours of preparation getting ready for the missionary to depart and all of these families who have just spent two years praying daily, writing weekly emails, and paying monthly expenses to support their missionaries and of the missionaries who have just spent two years focused on helping and teaching people. It was interesting to note the crisp white shirts and new shoes of the departing missionaries compared to the well worn attire of the returning missionaries. 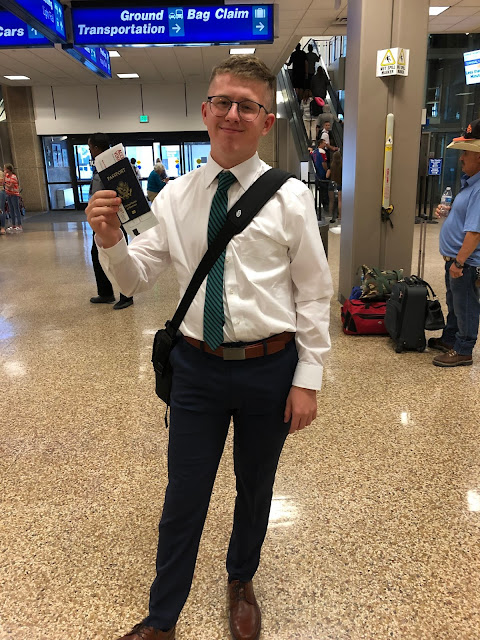 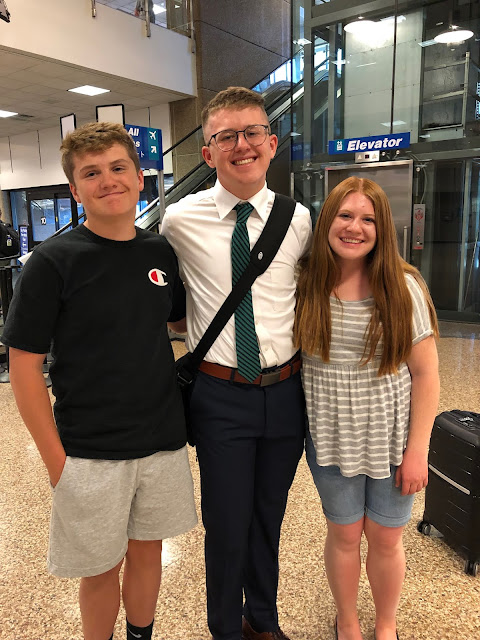 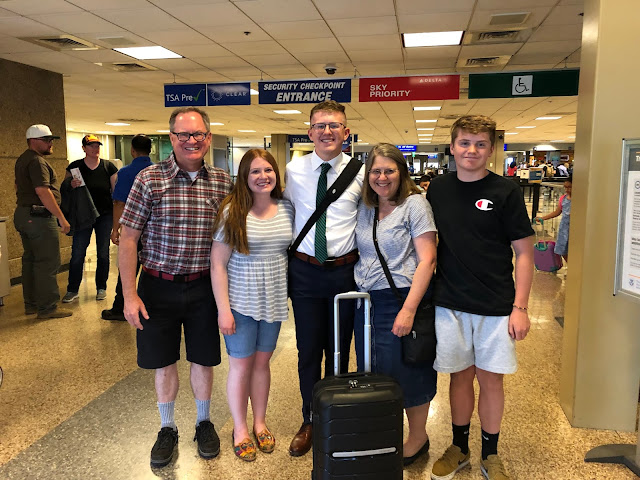 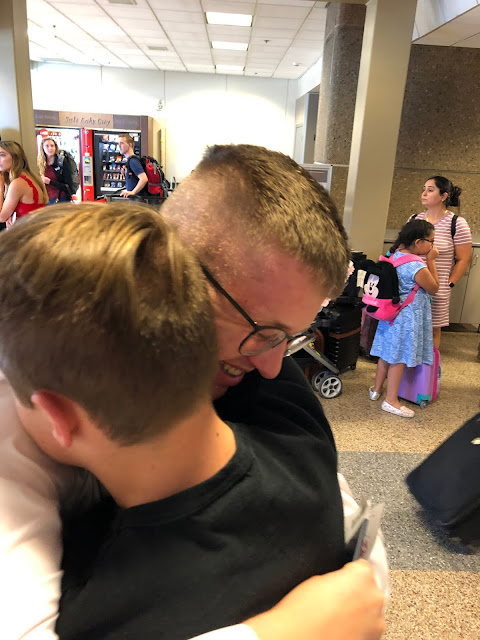 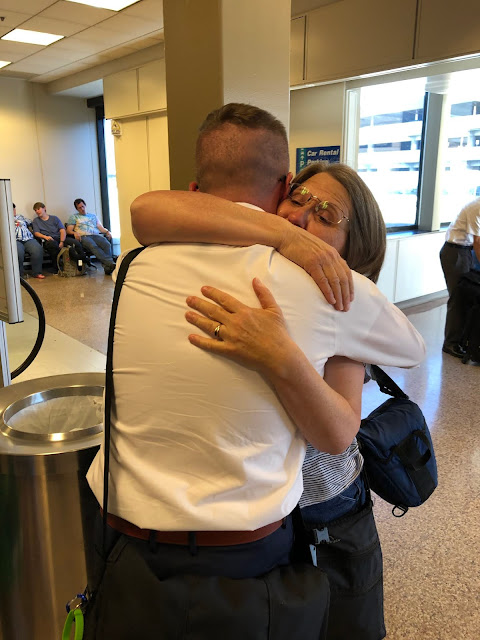 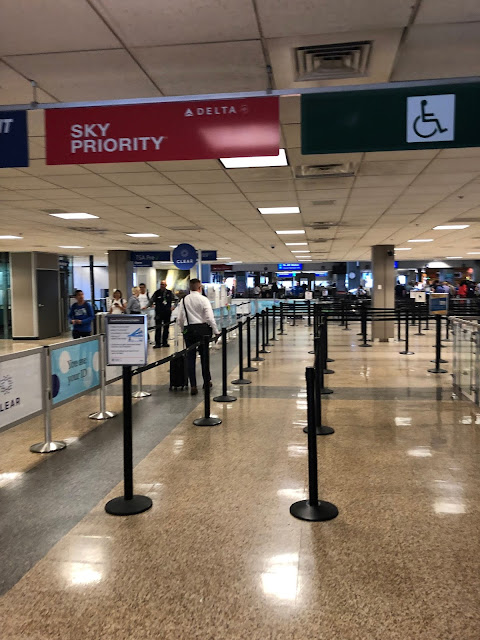 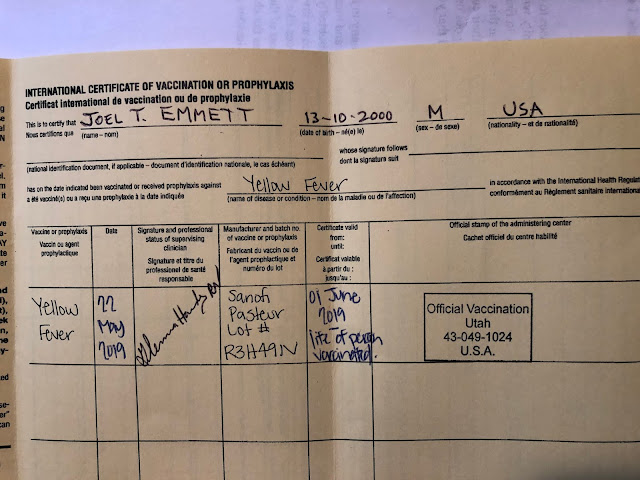 Driving home, we got a call from Joel. While waiting at the gate with the other missionaries he discovered that they had all brought their immunization cards. All he had was a print out of all of his immunizations that he submitted to the missionary portal. When we got home we did some checking and then called the Church travel office and found out that he does need proof of Yellow Fever immunization to enter Ghana. Yikes. Major mistake on our part. I hate to think of Joel on the flight wondering what will happen. Tomorrow morning we will take the certificate up to Church Offices for them to send over in a reliable/speedy daily shipment and we will send a scan of the document to the Ghana MTC and hope that they can use that to get Joel into the country with a promise that the actual certificate will be there in a few days. Stay tuned. We hope he doesn't have to fly back.

Joel did arrive in Ghana as scheduled. The MTC mission president sent this photo to prove it: 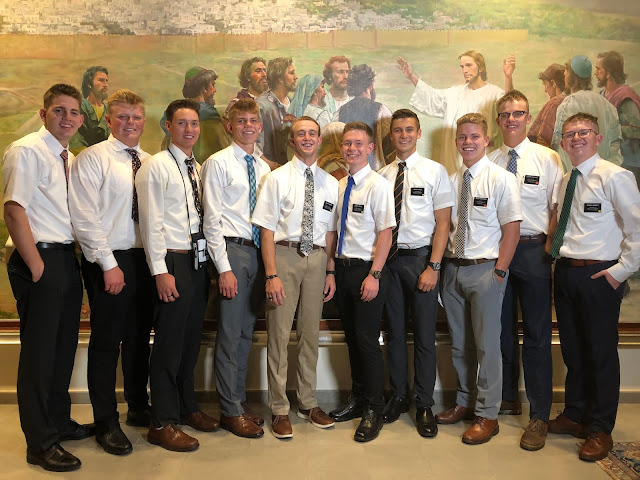 The next day we got an e-mail from Joel. He explained that when he arrived at the Accra Airport with out proof of having had a yellow fever vaccination, his only option was to pay $25 and get an on the spot vaccination in a side room in the immigration area set up specifically for that purpose. With that vaccination he was permitted to enter Ghana. A colleague of mine who does research in Ghana has seen other people having to do the same thing. Her comment was that she hoped they used a new syringe. We hope so too.

This morning we talked to Joel and got some clarifications.  This is how Joel put it in his first email home on the night he arrived: “Not having my yellow fever card was a pain but I managed to get it worked out but it did cost me. When I arrived at customs I told them that I didn't have my card but showed them my missionary immunization paper that showed that I had received the vaccine so they took me to another room and I payed 25 dollars to get a new one [certificate, not shot]. Kind of feel like I got hustled a little bit because they definitely could've just done it for free but I got into Ghana so that's all that matters.” Initially I had thought he had to get a second yellow fever shot, but that was not true. This morning Joel added that getting the certificate only cost $20, but as he was leaving the clerk asked him about a tip! So Joel gave her $5 more. Joel also told us that another missionary who had packed his certificate into his checked luggage also had to pay to get a certificate to get out of the airport. I am planning to send an e-mail to the missionary travel people and recommend that the travel information provided (from the Ghana Cape Coast Mission, on the missionary portal, and on the travel document guidelines) be updated and coordinated so that they all say that “missionaries traveling to the Ghana MTC need to carry the yellow vaccination certificates, particularly the yellow fever certificate, with their passports.” It may help a few families like ours avoid 24 hours of worries. Happy now that it all worked out.