Snowbird on the Fourth of July 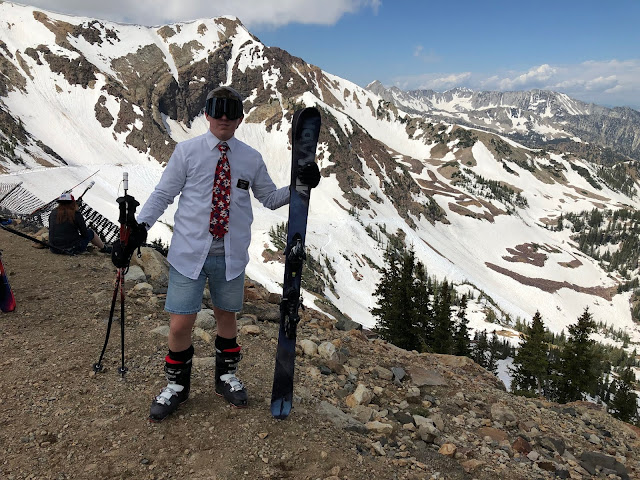 In anticipation of spending two years in tropical Africa, Joel decided months ago, after getting his mission call to Ghana and in the midst of one of Utah's heaviest snow seasons on record (711 inches at Snowbird) that if Snowbird was open he wanted to spend his last Thursday in the USA by skiing at Snowbird on the Fourth of July. We all thought it was a great idea and so did two uncles and three cousins who came to join the fun. 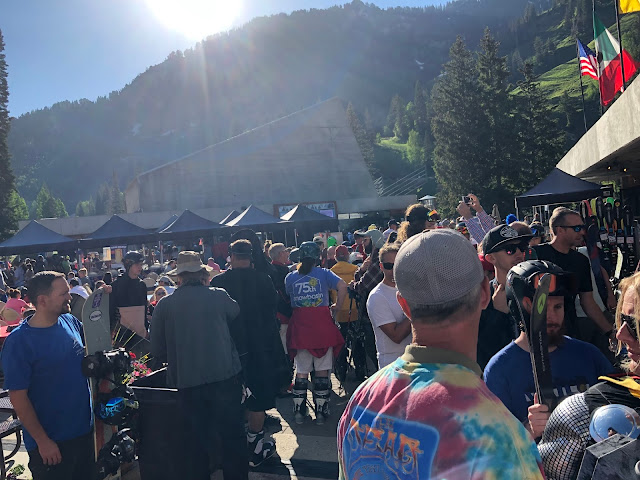 It was a great day, but not quite like we had imagined. I have skied at least twice before at Snowbird on the Fourth (the last time in 2005) and it was never that crowded. Today was crowded. We left Springville at 6:30 AM. Pulled into the lower parking lot at 7:30 and hiked up to the tram base. There we joined hundreds of others. There were lines for the pancake breakfast, lines to get on the tram--which opened at 8:00 and a long, long, two hour line to get lift tickets--$50 if you have a season pass to any resort, $75 otherwise. Since Sarah was not here to ski this past season, I took a season pass of hers from two years ago. I was thinking I may have to explain that she did not ski this past year because of her missionary service and hope they offered the discount anyway, but the overworked ticket agent didn't bat an eye at the old season pass and we all skied for $50. 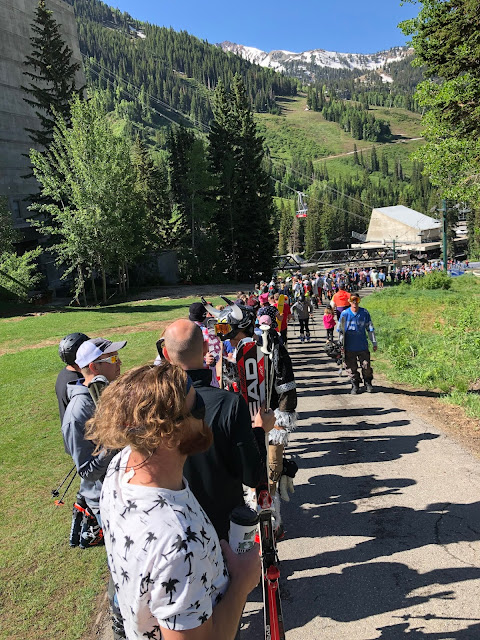 The next line for the tram was equally long, but moved at a faster pace--in part because the tram to the top of the mountain was moving at a faster speed than on normal ski days. Good time for visiting with my brothers, while the kids sat in the shade near the tram base waiting for us. 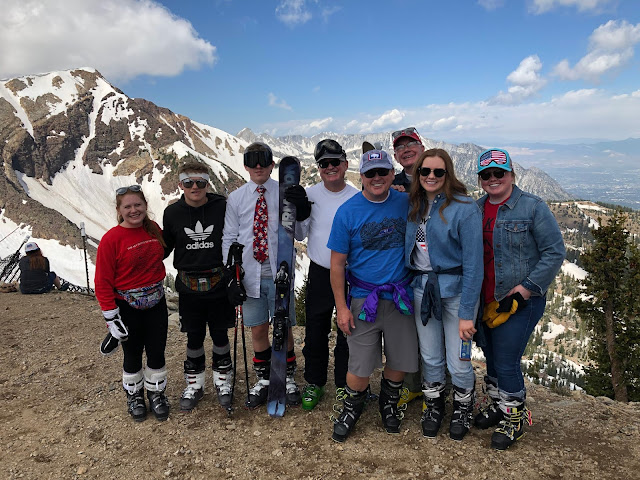 We finally got to the top at about 11:30--the planned closing time was noon.  By now most of us had worn out feet and legs from standing in ski boots for so many hours, but by golly we had gotten up early, driven from Cache and Utah Valleys, and stood in lines forever and were not about to give up. 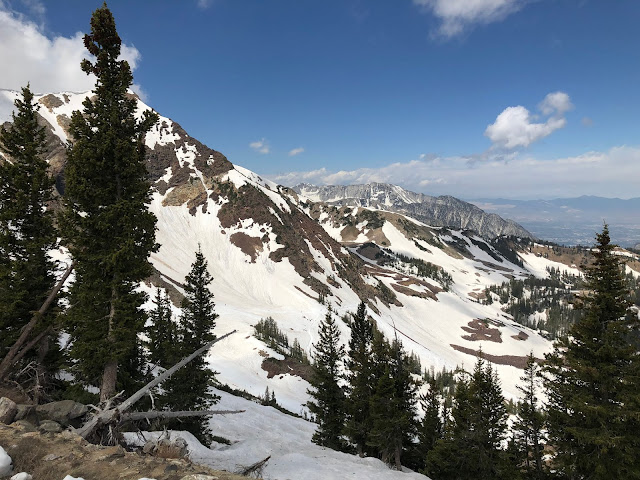 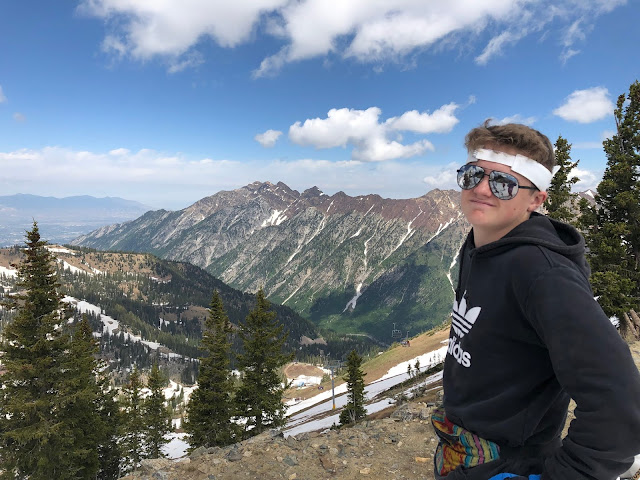 Soccer injuries on his shin made for a painful ski day for this kid. 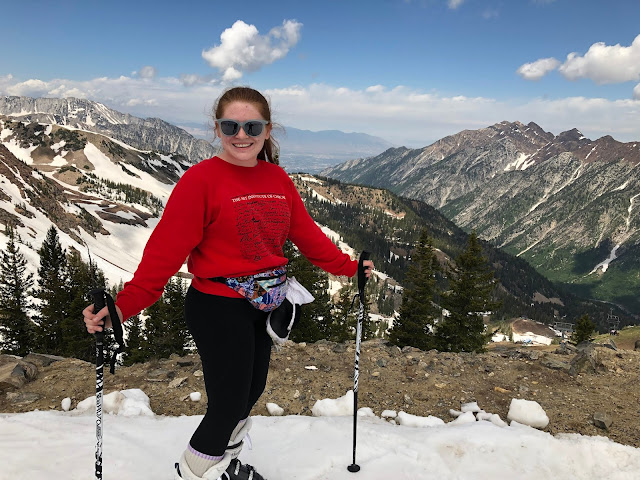 Rocking her Grandma Emmett's Art Institute of Chicago sweatshirt and batik fanny pack than Joel brought her from Bali. 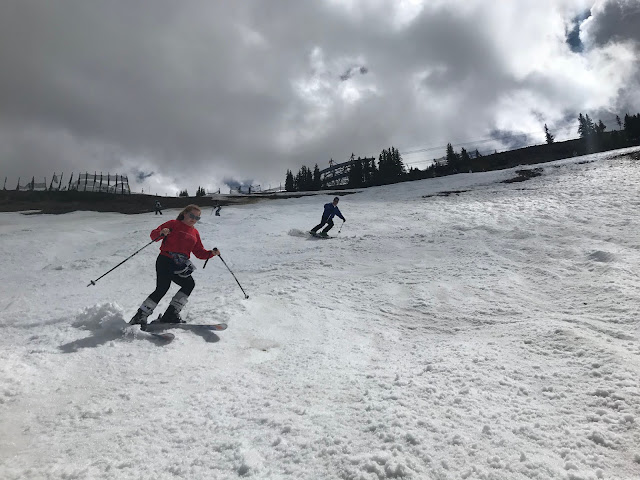 There were two passable runs down to the Little Cloud lift. Both had limited coverage and the possibility of having to take off skis to walk across bare patches. We chose Regulator Johnson over the Road to Provo. It was a good choice. This side of the mountain didn't get the early morning sun so the snow was not yet slush and past the ice stage. Just right corn snow. 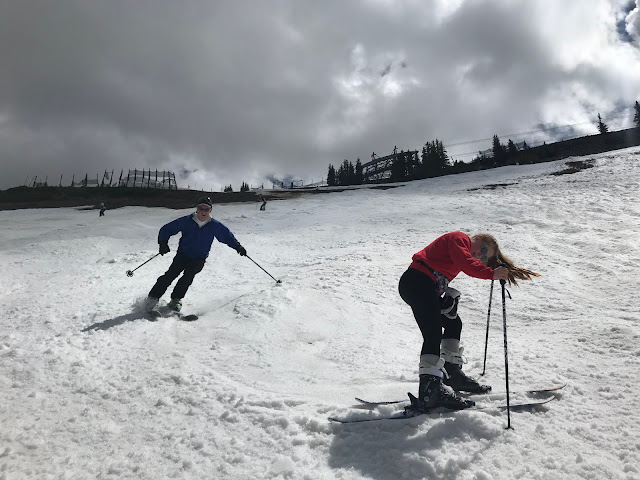 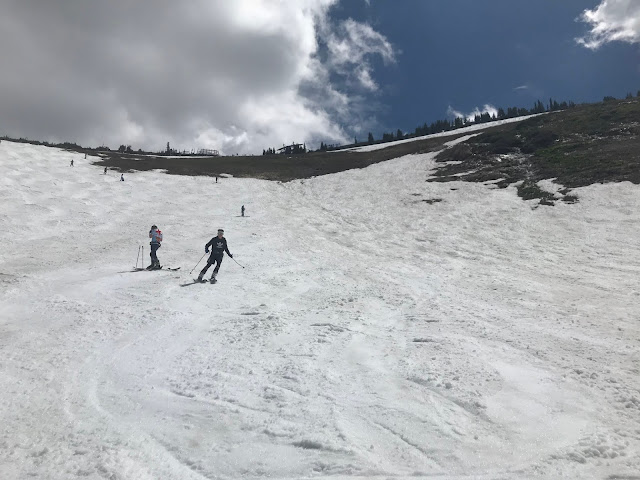 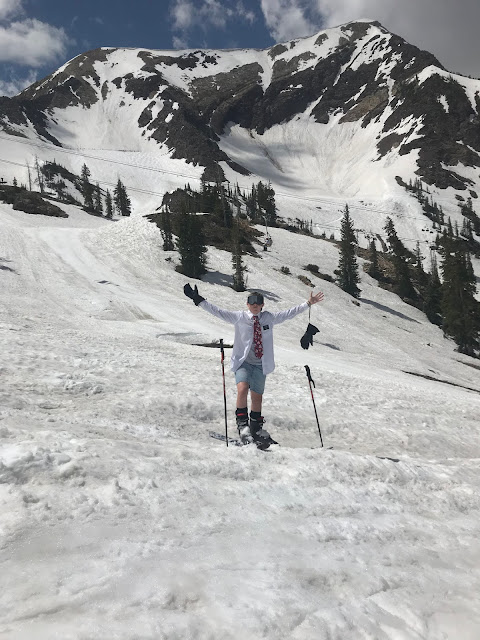 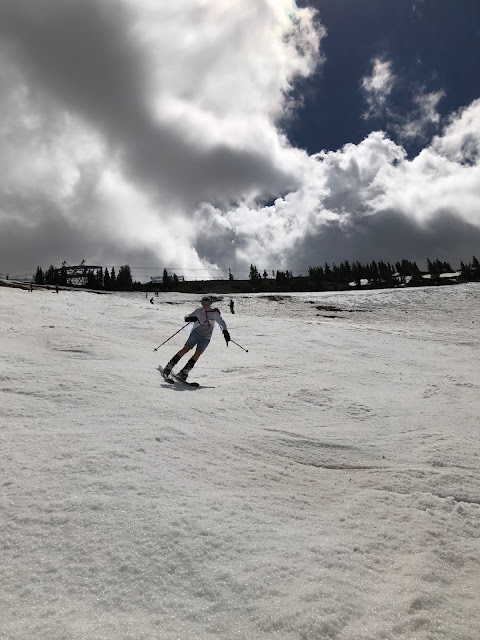 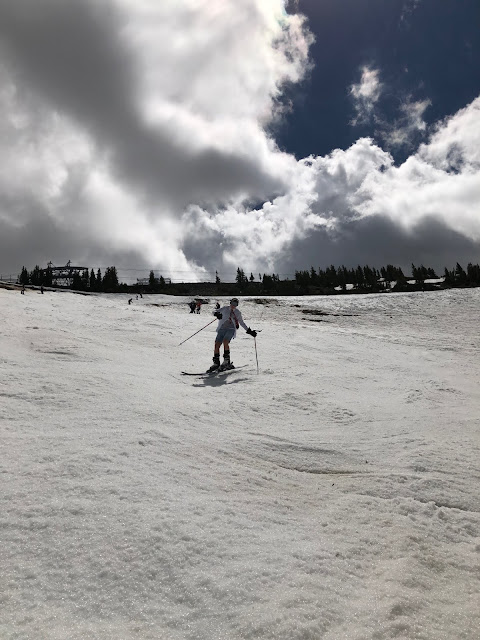 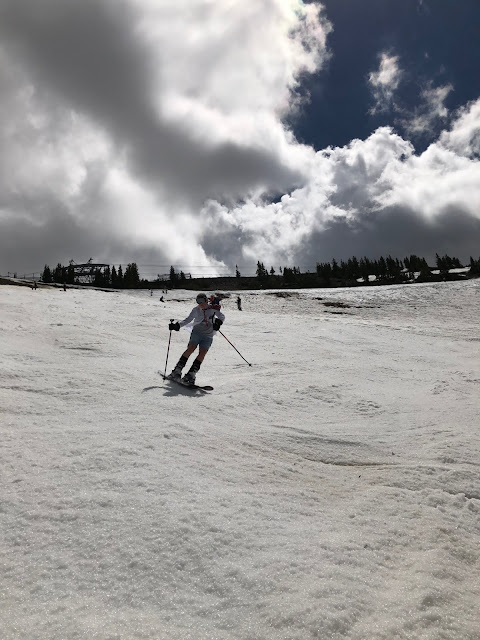 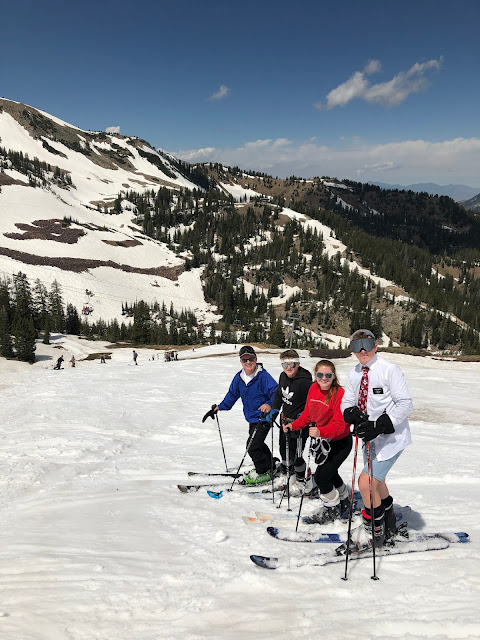 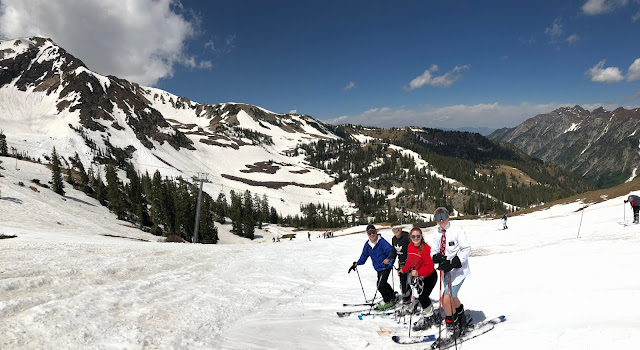 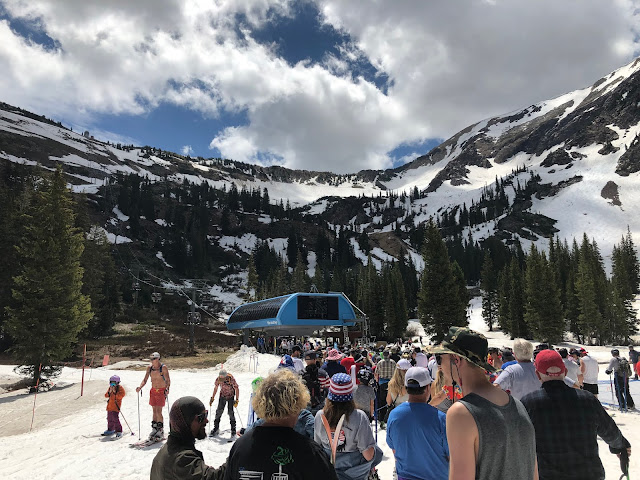 Another line at the base of Little Cloud lift. It was a party. More than a few drunk people, lots of skin, fun costumes and good humor all the way around--a wonderful slice of America. 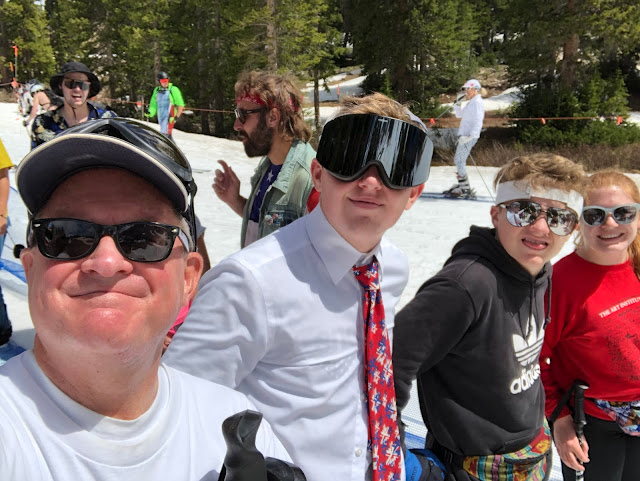 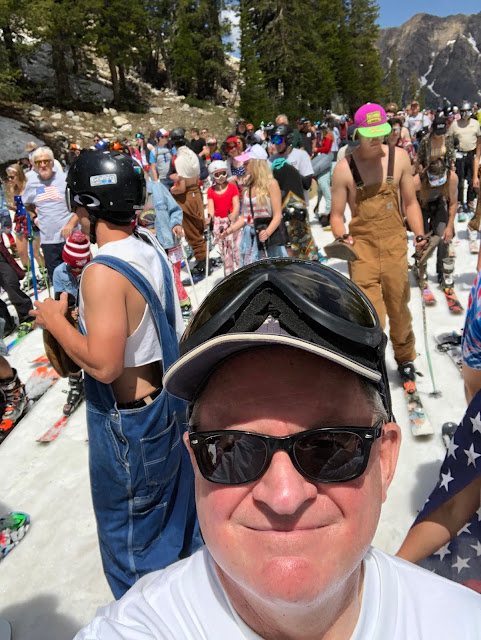 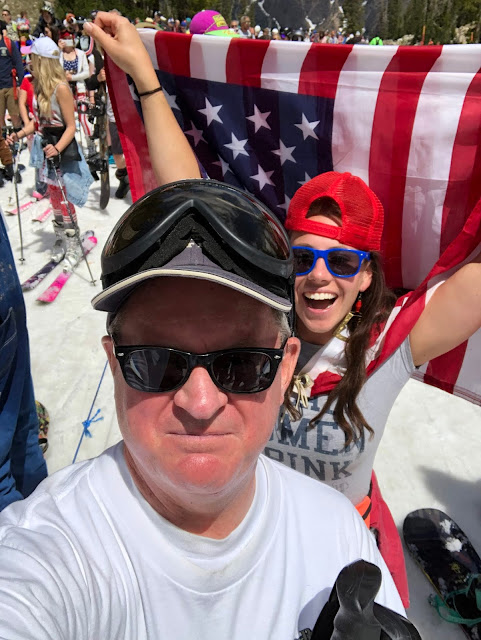 She just missed photo bombing my first selfie so I took a second. 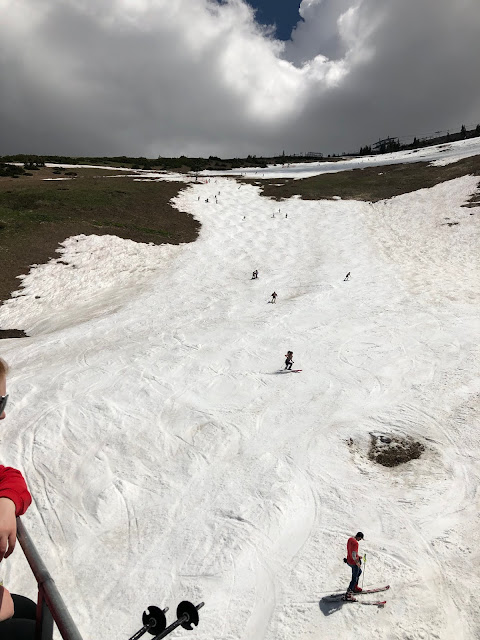 Regulator Johnson. Near the top you can see a brown path between the two snow fields. We all skied across it. Good thing it was just grass with no rocks. 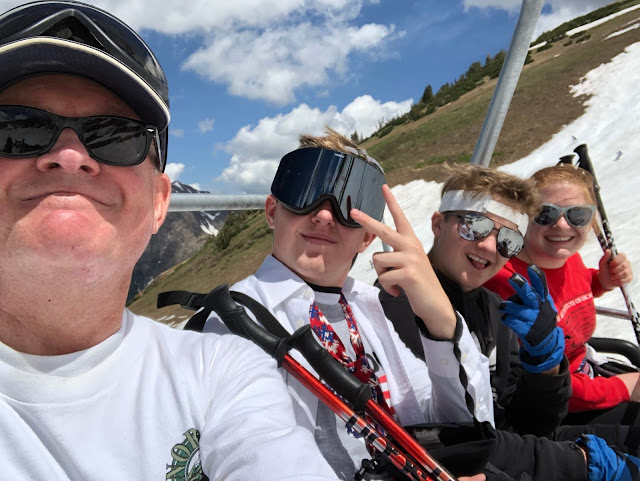 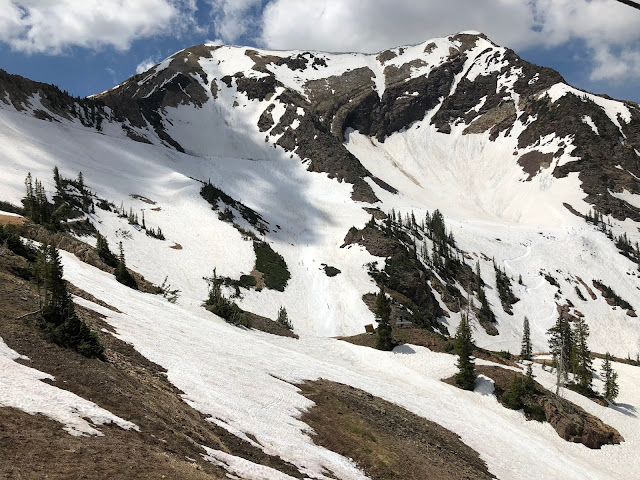 Once at the top of Little Cloud we had time to take one more run, but we were all good with "one and done." It was quite a hike from the top of the lift back up to the tram. Wore me out. The tram line down was the shortest wait of the day. Many of the 100 people on the tram ride down belted out a rousing, but too high pitched, rendition of the Star Spangled Banner as we glided into the tram base. Luckily I had a cooler of refreshing beverages waiting in the car. We then all enjoyed In and Out Burgers for a late and welcome lunch.  Final stop was REI to pick up a Dopp Kit (what I grew up calling them, now mostly called toiletry bag) which is one of the last purchases of many for Joel's mission. 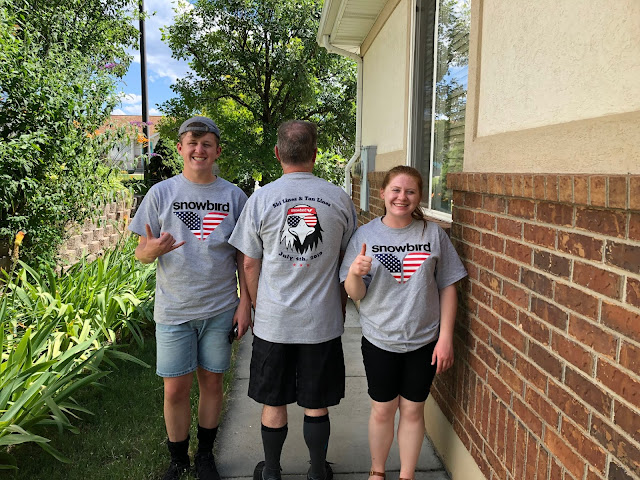 Ski lines and Tan Lines. T-shirts to remind us of a great day.

From which I learned that this was only the fifth time in 48 years that Snowbird has been able to open on the Fourth of July. The last time was in 2005. 3,500 skiers and boarders were at Snowbird today
Posted by chad at 6:31 PM