54 ¶ When they heard these things, they were cut to the heart, and they gnashed on him with their teeth.
55 But he, being full of the Holy Ghost, looked up steadfastly into heaven, and saw the glory of God and Jesus standing on the right hand of God.
56 And said, Behold, I see the heavens opened, and the Son of man standing on the right hand of God.
58 And cast him out of the city, and stoned him: and the witnesses laid down their clothes at a young man's feet, whose name was Saul.
59 And they stoned Stephen calling upon God, and saying, Lord Jesus, receive my spirit. 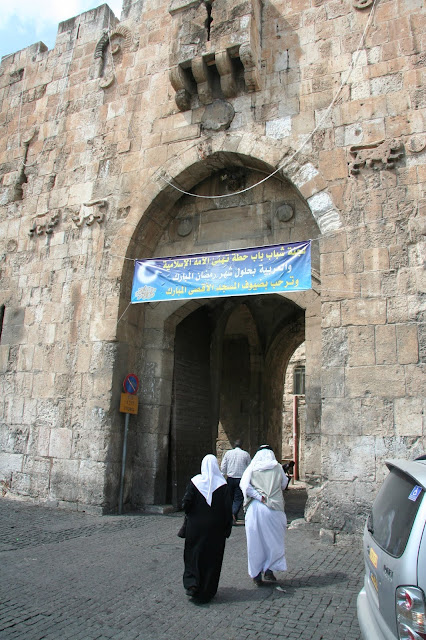 Lion's Gate (named for the decorative lions near the top of the arch) is also known as St. Stephen's Gate because of the tradition that Stephen was stoned to death in this area. The gate is the only open gate (the golden gate is sealed shut) in and old of the Old City of Jerusalem along its eastern wall. It provides access into the Muslim Quarter and the beginning path of the Via Dolorosa. 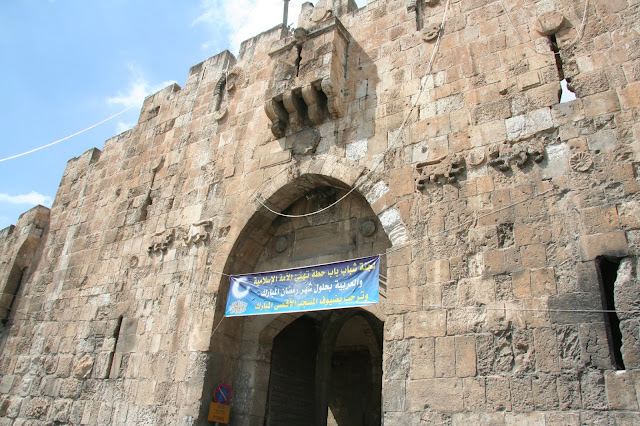 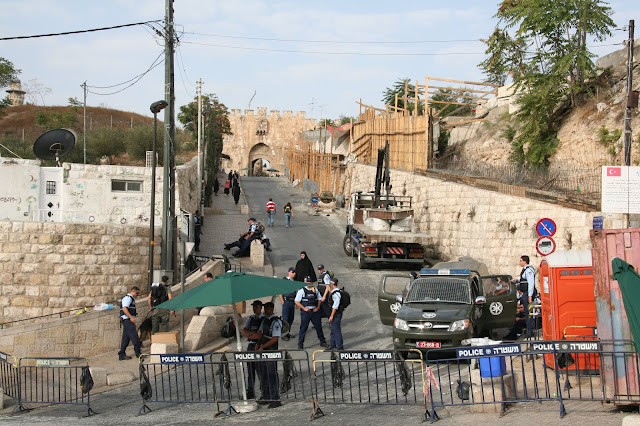 Road leading up to St. Stephen's Gate from the Kidron Valley. IN this photo Israeli Security is limiting Arab access into the city during the Jewish Feast of Sukkot.  (October 2009) 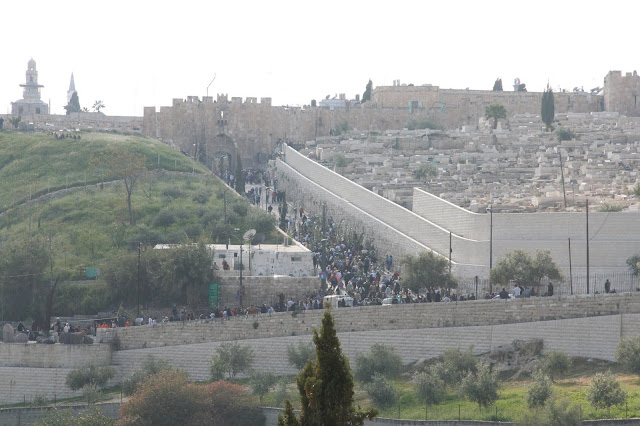 Christian pilgrims on Palm Sunday heading up into the Old City via St, Stephen's Gate. (April 2010)

Acts 9:
8 And Saul arose from the earth; and when his eyes were opened, he saw no man: but they led him by the hand, and brought him into Damascus.
9 And he was three days without sight, and neither did eat nor drink.
10 ¶ And there was a certain disciple at Damascus, named Ananias: and to him said the Lord in a vision, Ananias. And he said, Behold, I am here, Lord.
11 And the Lord said unto him, Arise, and go into the street which is called Straight, and inquire in the house of Judas for one called Saul, of Tarsus: for, behold, he prayeth,
12 And hath seen in a vision a man named Ananias coming in, and putting his hand on him, that he might receive his sight. 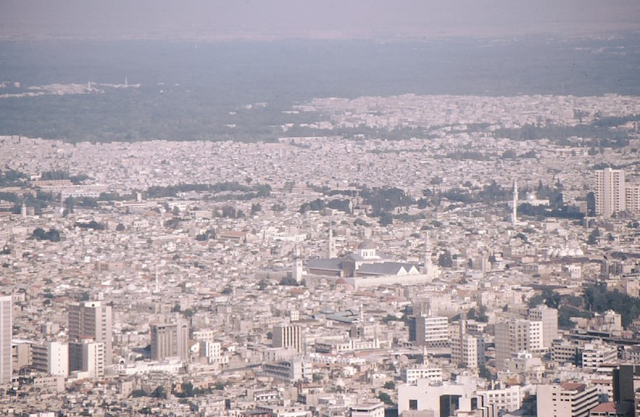 Damascus (view from the hills to its west) is one of the oldest continuously inhabited cities in the world. At the center is the large Umayyad Mosque. The Christian quarter is left center at the very edge of the photo. 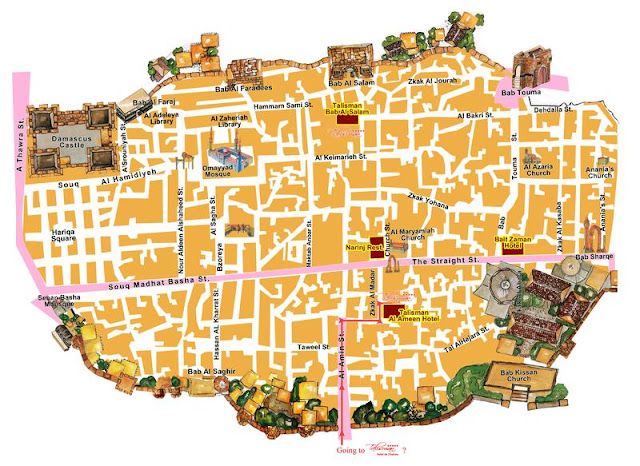 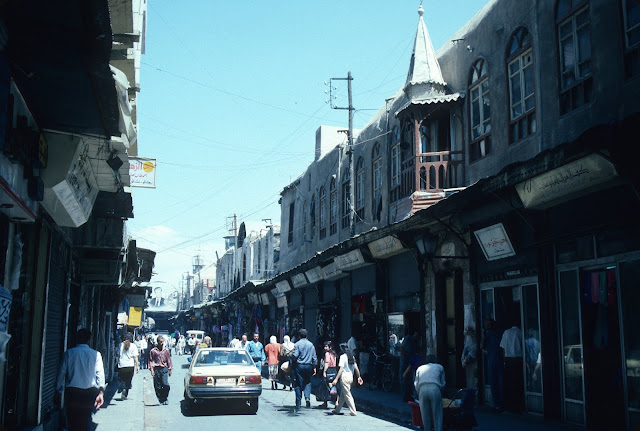 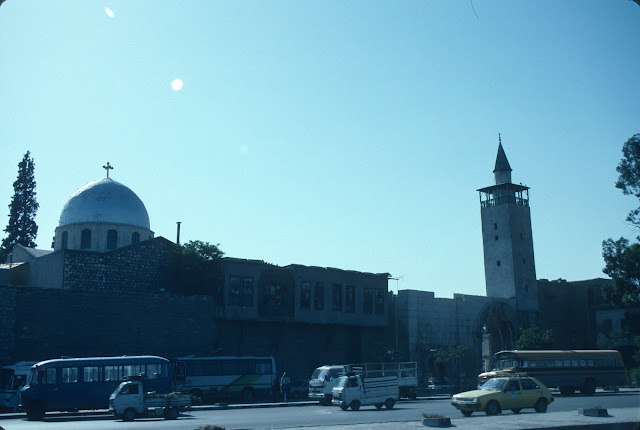 Eastern wall of the city with the Christian Quarter beyond the walls. 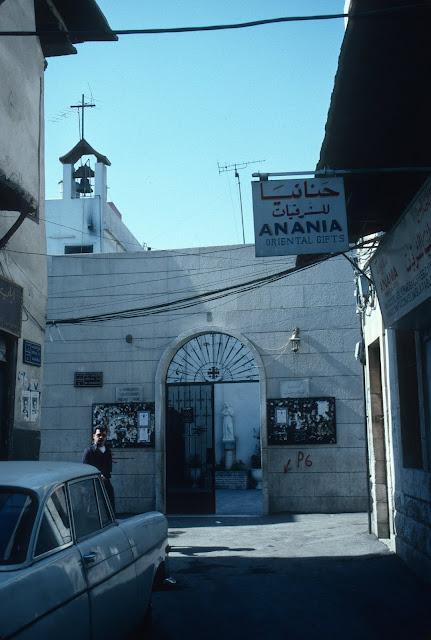 One of the churches in the Christian Quarter is the Church of Ananias built over the home where Ananias lived and where Saul/Paul's was baptized.
Posted by chad at 12:42 PM